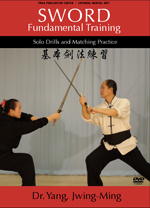 This basic sword training DVD reviews the fundamentals about the weapon, taking common techniques and drills that should be applicable to all sword training. As always, Dr. Yang’s teaching style is excellent; his Engineering background provides a logical approach to his teachings of his wealth of martial arts knowledge. There is much knowledge to be gained from each of his books and DVDs that I have studied, and, now including this one, I highly recommend them.

As with many of his other DVDs, the drills and techniques are shown with Master Yang performing them, then with students of a variety of skill levels performing them.  Yang will sometimes correct the students. I found the different displays and the corrections quite helpful during my own review of the lessons.

An outline of the DVD follows:

Sword key words and fundamentals techniques(27 most commonly used, based mostly on Northern Chinese style) (the notes after the techniques are my own memory joggers, not from the DVD):

Dr. Yang states the next skill level (after six months to a year of basics) is using the handguard to disarm your opponent). He also discusses at the end that in advanced training you must keep you mind off the sword and on your body. In addition, you watch the wrist moving instead of your opponents sword. He concludes with a reminder on focus and concentration (don’t blink!).

My son names my taichi sword