After three gorgeous weeks of low temps and low humidity, the 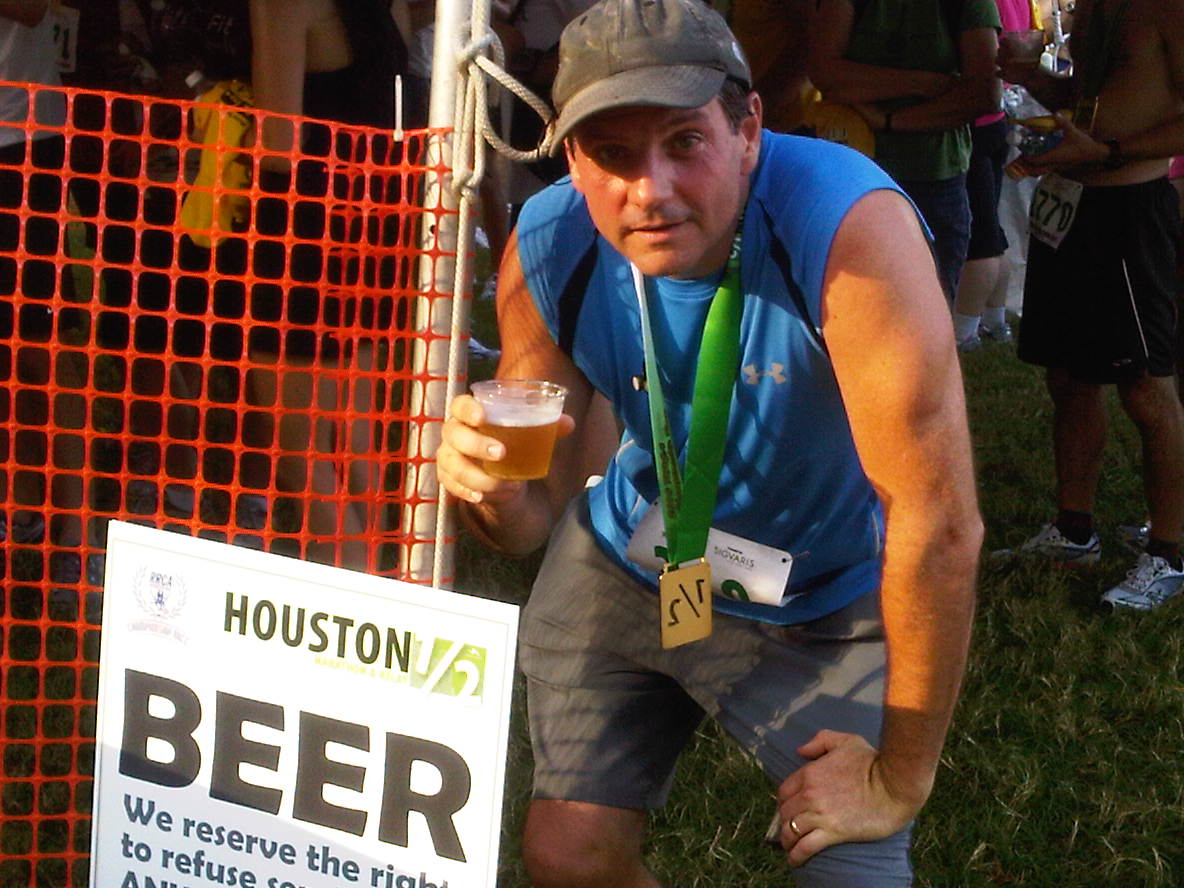 Houston weather returned to its norm: humidity off the Gulf and temperatures above average.

Just in time for my first attempt to run the Houston Half-Marathon, an adventure in the making. Bottom line: I did not beat my PR but I did finish in under two hours, not bad considering the weather (results are here).

The Lead Up (driving the Texas triangle is not the best warm up). After training for most of the summer, including my first ever 100 mile month (hey, I’m a late starter into this running thing), the week before the run found me driving the Texas triangle for work. Wednesday – Houston to DFW. Friday – DFW to San Antonio. Saturday – San Antonio to Houston. Driving is not the best activity to keep your legs relaxed and loose, but you gotta do what you gotta do. The other challenge was that my running buddy Bert had “kiddies interruptus” and could not run with me. Bert was big on motivational techniques like telling me he was going to put lipstick on me if I started walking (which I am sure that he didn’t mean as an insult to all those female runners that habitually blow by us). So I was going to need to motivate myself by the thought of a couple of cold ones at the finish line.

The Course (I preordered a path in the shade). The course took a 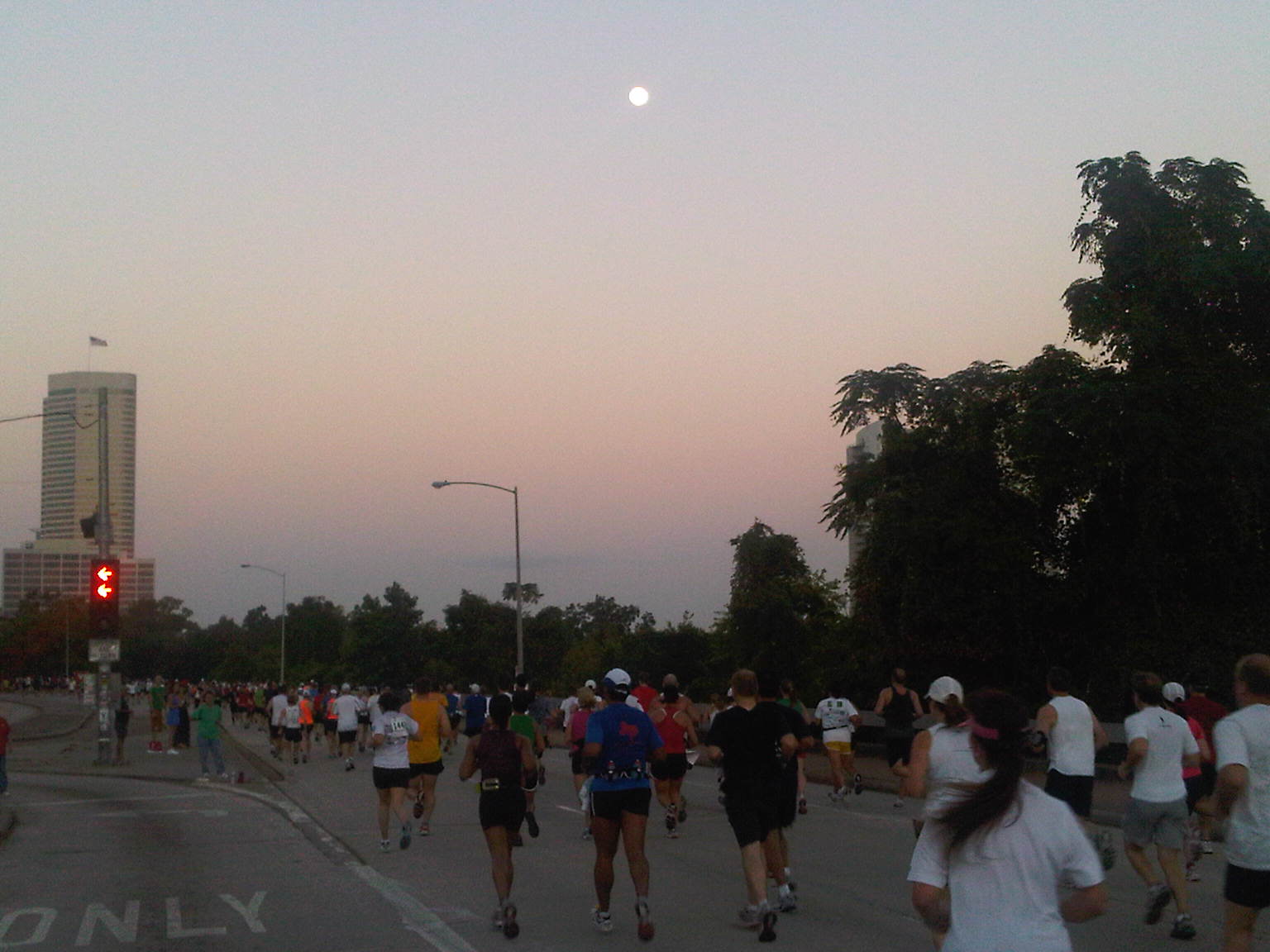 two mile jog through downtown Houston, then went down Allen Parkway and Memorial to loop 610 and back. Heading outbound, I got a nice picture of the moon in the west; inbound, the sun came out. I thought I had asked Bert to reserve us the part of the course in the shade but that paperwork must have been lost in the mail. We ran by one condo, me with my earbuds in, and some guy jogging close to me says “didn’t that condo used to be the old Jefferson Davis Hospital?” I am sure my tongue was hanging out, my sweat making the street slick, so I replied “Sure!” I knew my PR was in trouble when at the 4 mile mark I was doing a 9:05 pace, when my PR was at a 8:57 pace.

The Course Part II (There are no hills in Texas). For those of 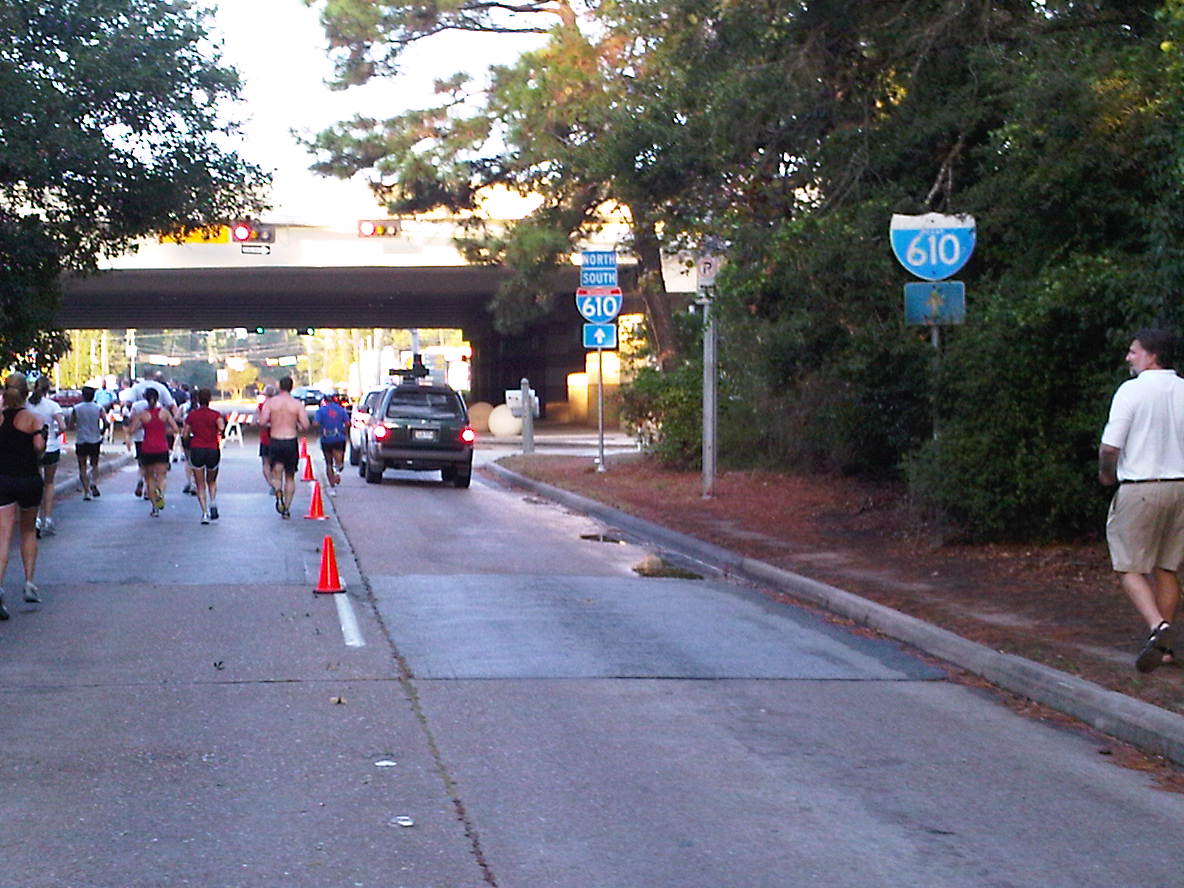 you not familiar with Allen Parkway, it has some underpasses. Houston as a whole is flat, so we train with no hills. But for masochistic or other reasons, 5Ks and this half-marathon goes through this set of underpasses. I have not had enough experience driving on Allen Parkway so was not familiar with all of the underpasses. So as I was running through an underpass, one of the volunteers (who all did a great job, BTW) says “come on, this is the last hill, you can do it.” I appreciated the support and pushed on up the hill…which ended up being the second to last hill. A bad trick, but motivational, kinda like Bert’s lipstick comments.

The 5 B’s of recovery. When done following your suicidal tendencies, I suggest following the Five B’s of Recovery, easy to remember during the post run haze. They are: beer, bananas, bag of ice for my knee, bling and beer. LARGE kudos to the organizers of this event for rewarding us thirsty runners with real beer (Fat Tire and Elyssa, a nice hoppy beer); even though I will drink most anything at the end of a race, light beer is not the ticket. SA Rock and Roll Marathon organizers take heed: MGD 64 doesn’t cut it either.

All in all, this is certainly a run I would do again. It is the right distance (anything longer than two hours bores me), well organized with a nice course…except for those darn hills.