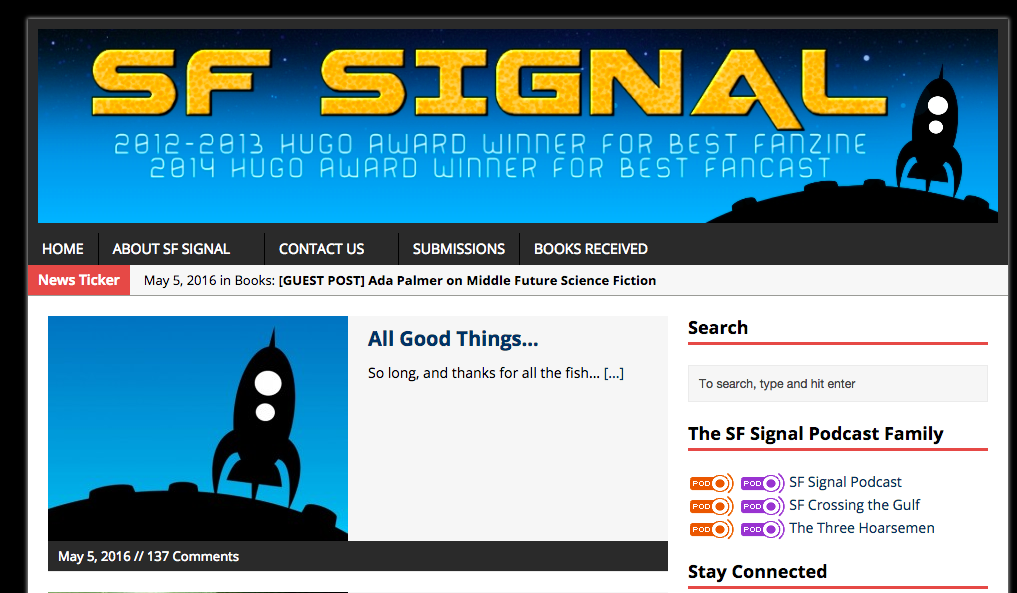 What did John do yesterday, with that extra 4-5 hours? Sleep? Have an extra bag of bagels? Catch up on his reading? Run a marathon?

John has three Hugos, deservedly so. He should have one for every year for the amount of time, effort, care and feeding he has put into the website for so many years (with his only pay being books sent to him by publishers/authors and a small bit of online ad revenue). John recused himself from any more awards after winning the two Fanzine Hugos, mainly because he believes there were others out there like him that put their sweat and time into it and should have a chance to win. He should get another Hugo just for that … and that describes John pretty well. He did it because he really REALLY liked science fiction. He didn’t care about the politics, or the puppies (I’m not sure he likes cats either)…he just liked the genre.

I’ve taken advantage of John’s kindness and good humor and have thus been writing occasional posts for SFSignal for eight years.  I met John in 2007 after I sent in a query to see if there was interest in reviewing a copy of my first book. When he gave me the shipping address, I emailed him that I could walk it to his house faster than the USPS would get it there (sadly true for many transactions these days). We both had worked at Compaq, so we met.

It started out as a great way to get great books before anyone else and interview some very cool people…and meet some outstanding fellow contributors, first online, then at a few of the conventions.

Now…it’s over. I hope John and JP have taken the time, after the overwhelming outpouring of thanks and support they received in the last couple of days, to reflect on this massive thing that they built. Twelve years…it is quite an accomplishment.