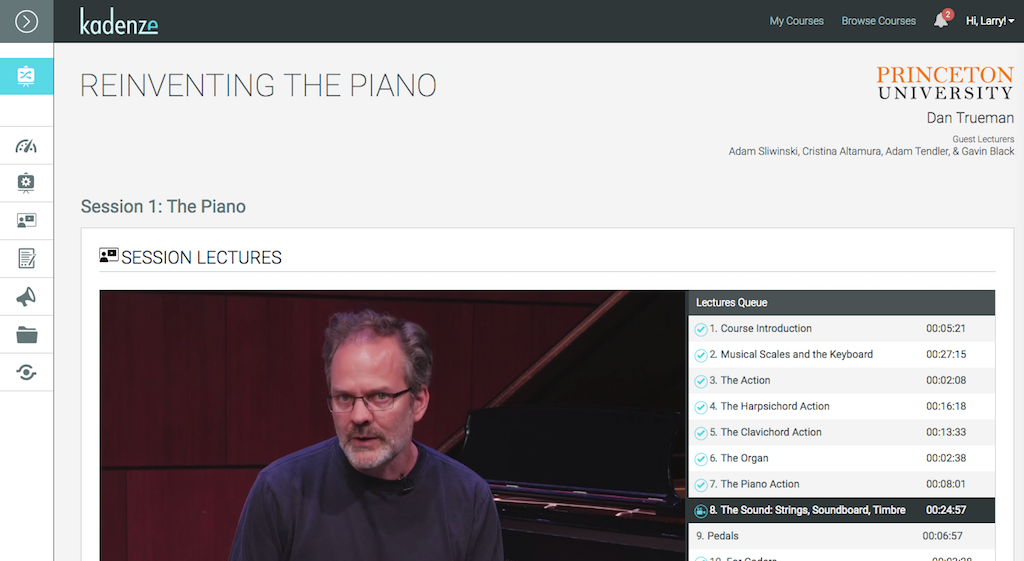 Reinventing the Piano is a course available through Kadenze which put the first session up on September 13. The subject is of course the piano, and the course goes through how it is built, why it is built the way it is, and what would happen if it were deconstructed and rebuilt in new ways. I haven’t had music theory since college, and haven’t played much since I broke my right pinkie finger more than a decade ago, but the first session, though it rehashes some information I’ve heard before, is an excellent outline of the instrument itself.

The course is taught by Dr. Dan Trueman of Princeton (bio here).

The course can be audited for free, or can be taken with a $10/month premium membership which gives the student the ability to submit course work, get a certificate of completion, keep a portfolio online and other perks. Students can participate in the forums as either free or premium users.

These are my course notes so I can refer back to them from future sessions and note the books mentioned.

Session 1.2 – Musical Scales and the Keyboard

Coursework – there is a Spotify Playlist with the same piece (C.P.E. Bach’s Moderato from Sonata in B-minor, Wq.49/6) played on clavichord, harpsichord, fortepiano and modern piano). Before I played the songs, I noticed that they were very different lengths. Then I went and read the assignment (yes, when I was a student, I often jumped too far ahead!) and the first question is…why are they different lengths.

The assignment also suggested taking a phrase and comparing it from piece to piece, picking a favorite performance and explaining why, and discussing why the harpsichord version’s lack of dynamics affects the piece.

The other suggested piece was Schubert’s Sonata in Bb-Major, D.960. I found a version of it on Spotify here. I much prefer the Andante Sostenuto movement over the Molto Moderato movement.

There is also a quiz and other coursework for those who are not taking the course in audit/free mode.

Session 2 is scheduled to be online September 27.