The Mystery on the Snow (Doc Savage #69)

This is the 15th story in Street and Smith’s original publishing order. 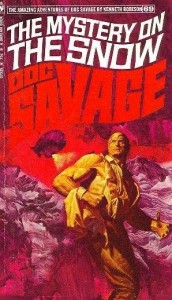 A sleazy mystic named Mahal is checking up on Doc, but doesn’t know that Doc has found him out and is having him followed and bugged by Renny. Renny overhears a conversation with Mahal and Stroam, Mahal’s boss, about trying to stop a man named Ben Lane from getting to Doc for help. Seems that Mr. Lane has discovered something in far Northern Canada that Stroam wants for himself (as always, the identity of Stroam is not revealed until the final pages, but in this instance it was a bit of a surprise). Of course there is a beautiful w0man involved: Midnat D’Avis, a private investigator from Canada hired by Ben Lane. Stroam and Mahal capture Renny, and then Long Tom and Johnny when they come to find Renny. Midnat is taken as well. Doc tracks them with cool shoes that he just had all of his men wear.

One of the enjoyable parts of Lester Dent’s writing is the factual history and science that he integrates into most of the stories, such as this passage where Doc is describing how the shoes work to Monk:

“In order to comprehend its method of operation, it will be necessary to review some scientific facts,” he stated. “First, you know that certain substances give off emanations or radiations, invisible to the unaided eye.”

“I remember an instance where an electroscope was used to find lost Radium,” Monk interjected. “It was in Philadelphia, I think. A hospital attendant accidentally washed Radium down the sewer. They walked along the street with an electroscope. When the leaves flew apart, they dug up the sewer and there was the Radium.”

“Suppose you close that oversize trap of yours!” Ham suggested unkindly. “Let Doc finish explaining about this contraption.”

“You might call my device an elaboration of the electroscope-and-Radium idea,” Doc went on. “Its function is too intricate for a casual description. The emanations are not detected by electroscope leaves but through the reaction of chemicals carrying an almost infinitesimal electrical current. The current alternations are amplified and used to actuate an oscillator. Which in turn creates a whistle in the loudspeaker.”

“I’m getting dizzy,” said Ham, who did not claim to be scientific-minded.

“You’ve been ‘dizzy’ for a long time,” grinned Monk. The homely chemist was elated at the prospect of locating the prisoners!

“The compound placed in the heels and soles of your new shoes is not Radium,” Doc continued. “You mean the shoes …” Monk exploded.

“Right! The soles and the heels of those shoes contain a material kindred to Radium — specially developed — which gives off strong, invisible emanations.”

“For the love of mud!” Monk grunted. “Your mystery device here will locate anybody wearing a pair of those shoes?”

“That’s it. The emanations pass through most solids in the fashion of X-rays. The wearer of the shoes may be underground or in a skyscraper. Simply by flying over the spot and pointing with the device, his whereabouts may be ascertained.”

Monk pointed at the box holding their own shoes. “You put our kicks in there so they wouldn’t interfere with the locater?”

The Bronze Man nodded. “The box is one metal that the rays won’t penetrate.”

After rescuing the three men and Midnat, Doc finds Mahal trapped in Doc’s office, like a rat in a plexiglass trap. Mahal eats his hair, which he thought Stroam had put a substance on to make a gas that would knock out Doc and the others, but instead it is poison and Mahal dies. Doc finds that Stroam headed north to Canada, and that Ben Lane set out by dog sled to try and reach Doc, so Doc follows in one plane while the boys follow in another. The Mystery on the Snow is that, when Doc finds the dogs and the sled, there is only one person around, a man named Kulden, but no signs of tracks that would show who attacked the men on the sled and where they went. Kulden turns out to be another of Stroam’s men, he sabotages Doc’s plane. Doc fakes a crash, saves his men (who Kulden framed for the attack on the sled), finds Ben Lane (disfigured from acid, which Stroam used to torture the secret location of his discovery, a new material that would make plane manufacturing cheaper and better) and unmasks Stroam, who like all Doc bad guys gets it in the end.

Lester Dent adds in motive for Stroam (he represents a cartel that wants to keep their monopoly on the plane manufacturing market using magnesium, which Lane’s new element would replace).

The Mystery on the Snow is a small blimp, painted white to blend with the snow, using a chemical ballast that leaves no trace.

Quite a good story, on to the next.