It all started with Bart Starr and Jerry Kramer

The Scholastic Book Club was a huge fetish of mine during later elementary school and middle school. Every six weeks a pulp magazine of their latest offerings would arrive. I’d check off the ones I wanted, then work to persuade my mom and dad to get me some subset of the list. 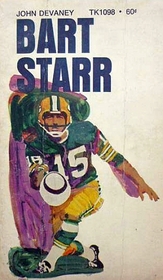 That was how I read about Bart Starr and the Green Bay Packers.

One of those players was Bart Starr, subject of the Scholastic published biography by John Devaney. I devoured that book, and was then handed a copy of Jerry Kramer’s Packer Diary, Instant Replay which I also absorbed. Though I was in Texas, the Packers became my team. Stories of the Ice Bowl and the two Super Bowl wins, of Lombardi and the great Packers of those times, made them instant favorites. 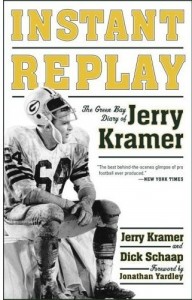 Shortly after this, the Packers made the playoffs again, in 1972. This would start a pattern of testing Packer fan resolve for a decade, making the playoffs again in 1982, and then again in 1993. There were consistent playoff participants thereafter; but it was a LONG wait for us Packer fans…nearly three decades, until January of 1997, for the Packers to return to prominence and win another Super Bowl with Brett Favre at quarterback. They came close the next year, losing to Elway and the Broncs.

Unless you’ve been living under certain rocks, you’ll know that the Packers under Aaron Rodgers are reining Super Bowl Champs, and are currently undefeated.

I have never seen the Packers play. My wife did win tickets to the Super Bowl in a contest, so we’ve been to Super Bowl 41, in February of 2007, watching her favorite Peyton Manning and the Colts defeat the Bears.

That changes next Sunday, November 20, when, for my 50th birthday (still a few weeks away) my wife takes me to sit in the 5th row of the LeapZone at Lambeau Field when the hopefully-still-undefeated Packers play the Tampa Bay Buccaneers.