This race report is a week late, been a busy week (both business and pleasure) since last Sunday’s Barr Trail Mountain race (July 19, 2015). 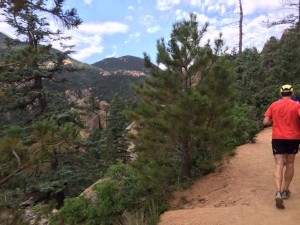 Description: I am using this race as a tune-up and track education (it runs the same trail) for next month’s Pikes Peak Ascent. The description of the Barr Trail Mountain Race from their website:

For those readers that I do not know, to level set: I’m 53 years old. My half marathon PR is 1:47. I am a “flatlander”, so much of my training (the first 12 weeks of the 18 week Hanson program) was done in Houston in very high humidity, very high temps and almost no altitude. I temporarily relocated to Denver around the 4th of July, to get a bit more used to the altitude. I’ve had ACL replacement in the right knee and have a bit of arthritis in my left knee (or so my ortho keeps trying to tell me) but have mitigated that by changing to Newtons and changing my gait to a short, choppy one with much more mid-foot than the heel-toe I was doing in my mis-spent youth. I sometimes run with a knee brace; sometimes this is to help the arthritis, sometimes it is to help with my imagination.

With the Hanson program as a my guide, my training was 153 miles in May, 165 miles in June. Though pace didn’t really matter in this race, my target pace for training was the same as my half-marathon PR (an 8:15 pace).

Upon arriving at higher altitudes, as instructed by several more experiences runners, I reduced the mileage for the first week to let me body adjust to the higher altitude. I did feel out of breath at the first, but dehydration was more of a problem. After the first week it was not an issue. But I did apparently aggravate my left knee, either from running speed runs the 2nd week in Denver or trying to keep up with my wife in yoga (pigeon pose? really?). After that, the knee brace was a constant companion.

Race: Except for brief parts of the start and finish, the course follows the Barr Trail up and back. As mentioned, this is the same trail as the Pikes Peak Ascent and Pikes Peak Marathon…with the notable exception that runners only go up to Barr Camp instead of the top.

For a very detailed description of the course, see this article on the SkyRunner website.

And, yes, I did take a tumble and earn some road rash on the way down. 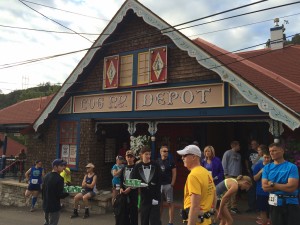 We were concerned about parking, as they asked racers not to park on Ruxton Rd (where the start is). But we found very in-expensive street parking right across from the park where the post-race beer would be served. The walk up Ruxton served as a decent warm-up (as some of the runners ran up it for a warm-up).

Going up: The race started at the Cog Railway station and immediately headed up on a road. Adrenalin had everyone running; tried really hard to keep a slower pace. As Matt Carpenter says in the afore-linked-to description of the course:

“The hill that starts at Hydro Street is the steepest on the course and it is silly to take the chance of blowing your race on such a short section. Indeed, this one section has probably been the cause of more poor performances than any other on the course. If people pass you here ignore them because you’ll most certainly see these runners further up the trail when they pay for their indiscretion.”

At times, this hill turned into a “fast hike” pace rather than a run, due to the crowd of people. I found out very quickly that this was the norm for this race; there were several spots, especially on the switchbacks where you cannot pass and it is a steep climb. Therefore you either save you strength and just follow in line, or try to pass. I did a bit of both as we went through the “W”s, the 13 or so switchbacks as you climb up the trail. My tracker told me I was doing between a 16-18 minute pace at this point.

Great video by a local reporter going up the “Ws” below. I’m about 4:08 in the video, greenish-yellow shirt with grey cap (and yes, my wife buys my clothes so they match)

To say this was “tough” would be putting it mildly. The elevation gain is about 2,150 feet to No-Name Creek, for a grade of about 13%. There were definitely parts where the voices in my head said I would not make it. But the mantra on this race and the Pikes Peak Ascent to come is “Keep on Moving” so we did. 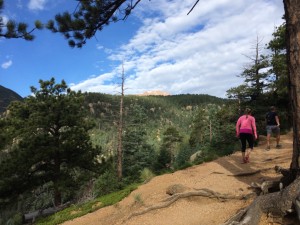 Eventually, I rounded a corner a saw Pikes Peak. It was a clear day, it was beautiful…and looked a long way away.

In between we hit two aid stations, one manned by kids dressed in Christmas attire (including one in a wrapped box, but he wasn’t Justin Timberlake) and one where one kid was holding back another wearing a Triceratops hat. I actually had enough oxygen to laugh.

The next part was the flattest part of the course, approximately two miles (the grade here was 8% but there was a lot of flat and downhill parts mixed in). The trail here was wide enough to pass safely, for the first time. It was here that I starting running slightly behind Phil, who had a yellow “Marmot” runners shirt on, and had obviously done this run many times. We chatted a bit, and I fell into his rhythm, which was a steady pace, same effort uphill as on flat and downhill.

There was a stretch of wet rocks on the trail, then an ascent into Barr Camp, and the turnaround. Barr Camp is at 10,200 feet elevation, a bit over halfway to the top of Pikes Peak.

Going down: After carefully stepping over some of the wet rocks, I said farewell to my new running buddy Phil and let gravity assist me. I had been practicing downhill running in a parking garage, keeping the short, choppy gait but leaning in a bit so as to keep perpendicular to the ground. And I kept my hands out and down for balance instead of swinging them.

After the hard slog up, the feeling of going down, at times greater than an 8:00 pace, was euphoric. I tried to keep the level of effort the same (my strategy for the entire race), and gravity did indeed help. There was a group of four ladies in front of me who obviously knew each other, and they were having a good time. They talked like they knew the trail well, so I followed them down.

The race spread out quite a bit. One of the gents about five in front of me took a tumble, and we helped him up and continued down. The group of ladies slowly peeled off until there was just one of them and me. For a long time, there was no one around us. Her name was Sheryl, and she’d done this course many times. I followed her lead, and stayed on the sides of the trail that she did.

I came around a bend, probably a bit too fast. There was a couple hiking up the trail in front of me, and I looked at them instead of the trail. My right foot caught a root, and at that speed, I was down. Scraped my right hand, and (though I didn’t know it at the time) splatted my last GU pack all over the pocket of my shorts. A small pine tree kept me from rolling off the trail, and I was up and heading down again quickly. Another hiked who saw me fall said “warrior wounds”, and I told him the last thing my wife said to me before the race was “please don’t fall”….I think she meant “off the mountain” so I’m still good there. A lot of blood on my hand and arm, but they were only scrapes.

I had lost contact with Sheryl, but tried to keep the same pace. Close to the end my right hamstring (same leg that caught the root; same hamstring that gave up part of its tendon for my rebuilt ACL) decided to remind me that it didn’t sign up for this race. I slowed a bit, though I was still passing some folks on the way down.

As I got off Barr Trail (and was told there was another half mile) my hamstring basically told me to piss off, it was done. I stopped for a bit to stretch and massage it, and was passed by one lady. Unbeknownst to me, she would end up being the first Texan to cross the finish line, and I would be the second. After running 6-plus miles downhill, the finish line was up a very steep road…I assume to get us out of the way of the Cog Railway traffic. I hate hills at the end…. 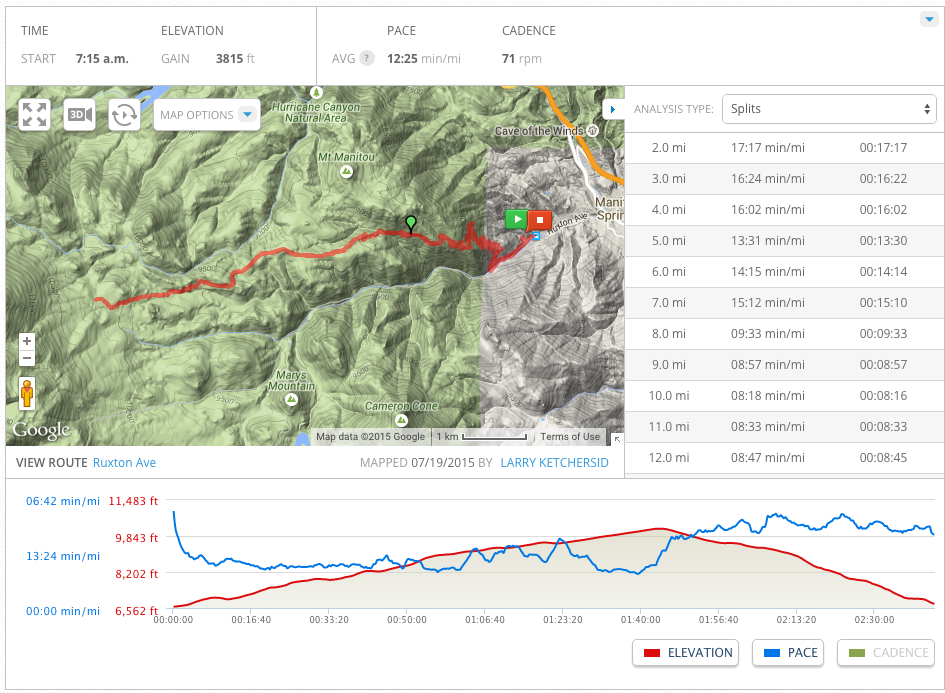 Nutrition: There was water and gatorade at several stops on the way, manned by local schools cross country teams. The race had us vote at the end of the race for which of support stations was our favorite. The Jurassic Park dinosaur team got my vote.

I did one GU or Stinger pack on the way up (around the one hour mark) and one on the way down. I was thirsty some, but never got hungry.

Afterwards: The first finishers had a bit of confusion, as apparently a volunteer had set the sign up wrong, sending them the wrong way. To further complicate matters, eventual winner Andy Wacker started seven minutes behind everyone after an alarm clock SNAFU…but still managed to be one of the co-winners. Nice interview with Andy below:

I have a twice-broken pinkie on my right hand, which is where all of the scrapes from my fall were. When the little first aid girl washed off all the blood and saw my finger, she kinda freaked out. “Oh my god, I’m not sure I’m equipped to fix that!” My wife was cracking up, and I told the girl that it would indeed be miraculous if she could fix that.

The after race party and awards ceremony was well done, featuring local beer and BBQ. All race organizers, please pay attention – Michelob Ultra sucks as a post-race bevvie. This race had a Pinneap-Ale Wheat from local Manitou Brewing Company. Both of the pints I had were excellent. There was also BBQ.

I was told the downhill part of the Barr Trail Mountain Race would be a “quad-killer”…and those who told me so were spot on. It didn’t hit me Monday, but I was hobbling around a lot Tuesday. But now, a week later, I’m back to the training program, aiming for the August 15th Pikes Peak Ascent. 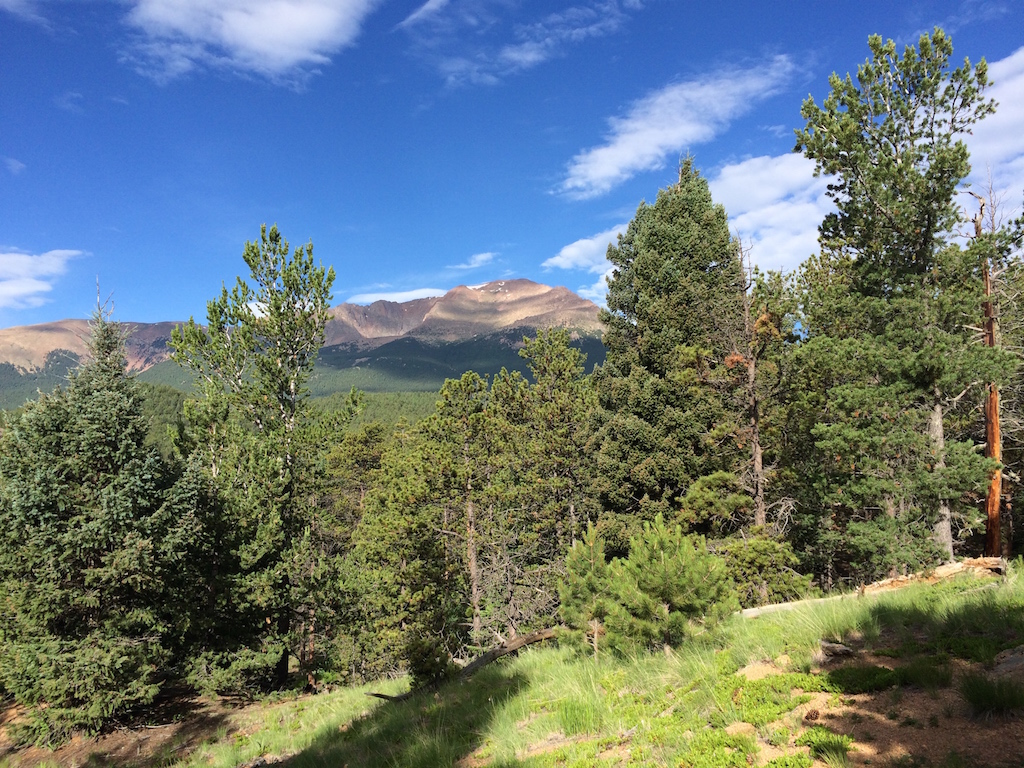