Based on the number and quality of horse statues in Saint Petersburg Russia, there must be a historical fascination  and linkage between Russians and horses. The obvious link would be the Cossacks, who reputedly had their children on horseback by age three. Whatever the motivation, the horse sculptures fascinated me. Below are just a few.

The Anichkov Bridge, named after original engineer Mikhail Anichkov, sits across the Fontanka River on Nevsky Prospekt in Saint Petersburg. Four marble statues of horses and their tamers, in various states of each vying for control, sit at the four corners. Two have an inscription dating from 1841. The other two are marked 1849 and 1850. All four were sculpted by Pyotr Klodt.

It would seem that the order to view them would be from the perspective of the man on the ground, rising up to the challenge of taming the horse. I’ve found several different interpretations online. Taken in chronological order, it seems like the horse (or nature) is winning over man. The order can also tell the story of getting knocked down and getting up again…or, in a different order, of slowly gaining the horse’s trust.

Below is one of the sculptures dated 1841. This one sits on the southwest corner of the bridge. The horses front legs are in the air with the man standing beside him, holding the reins. 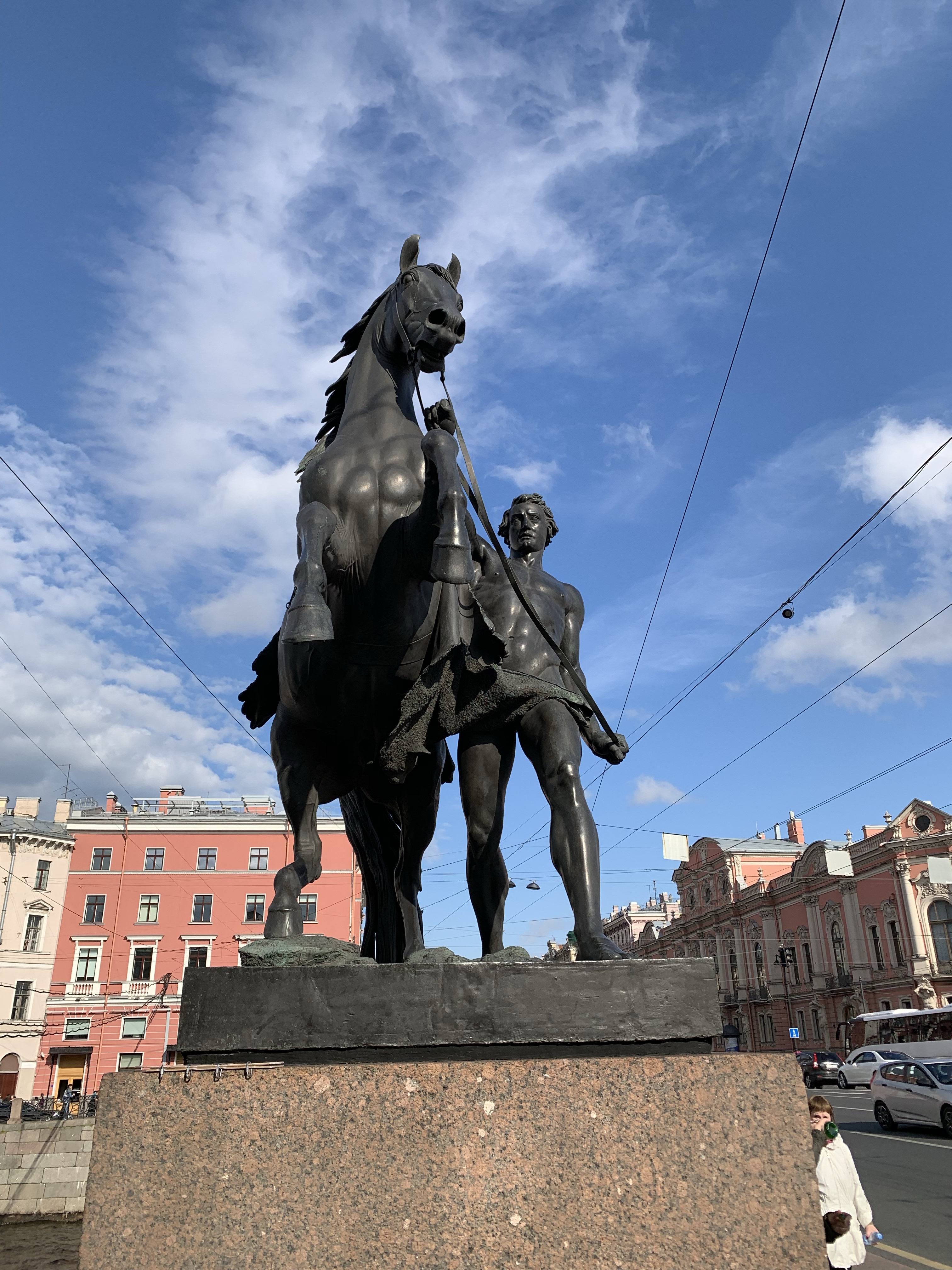 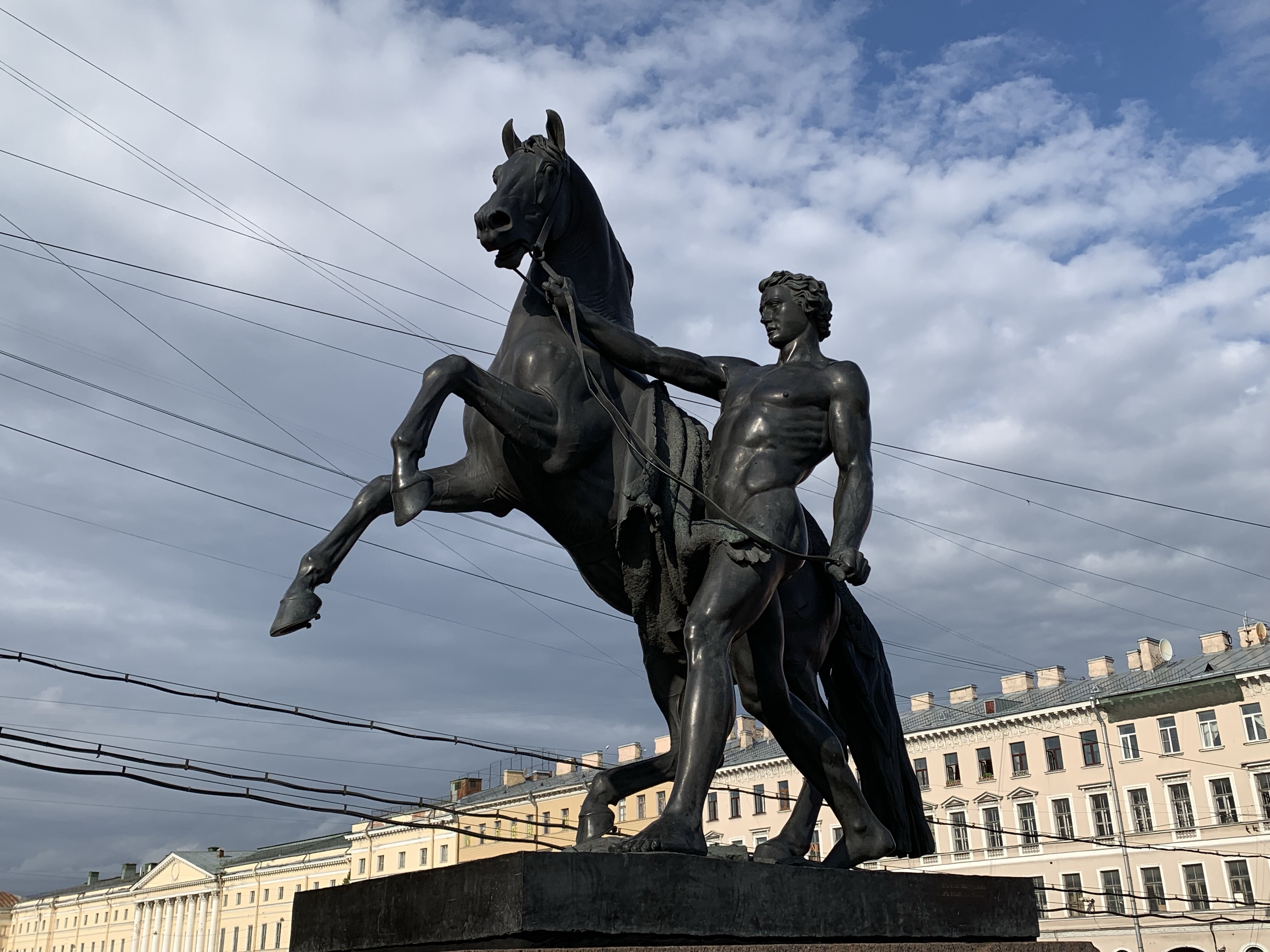 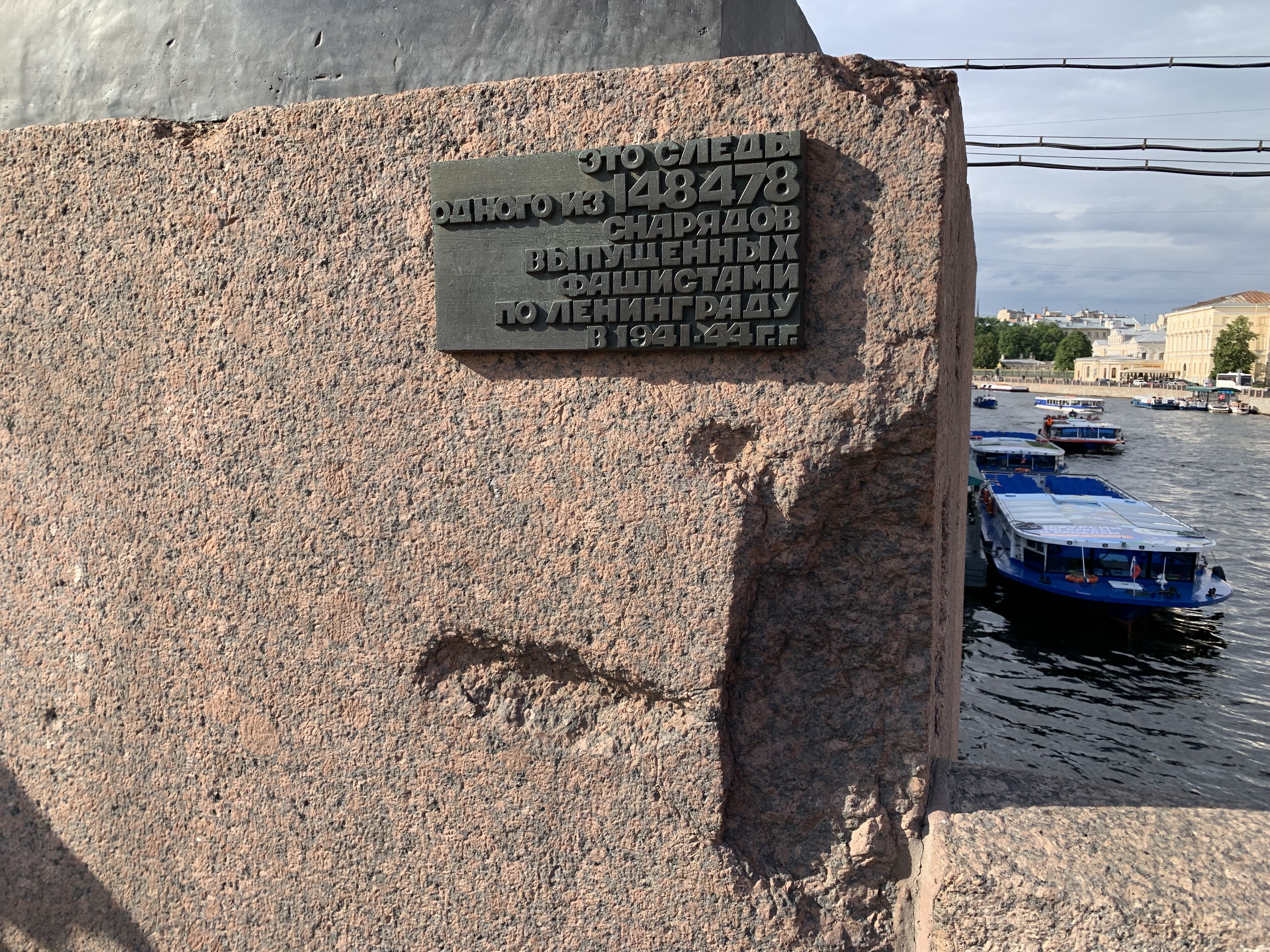 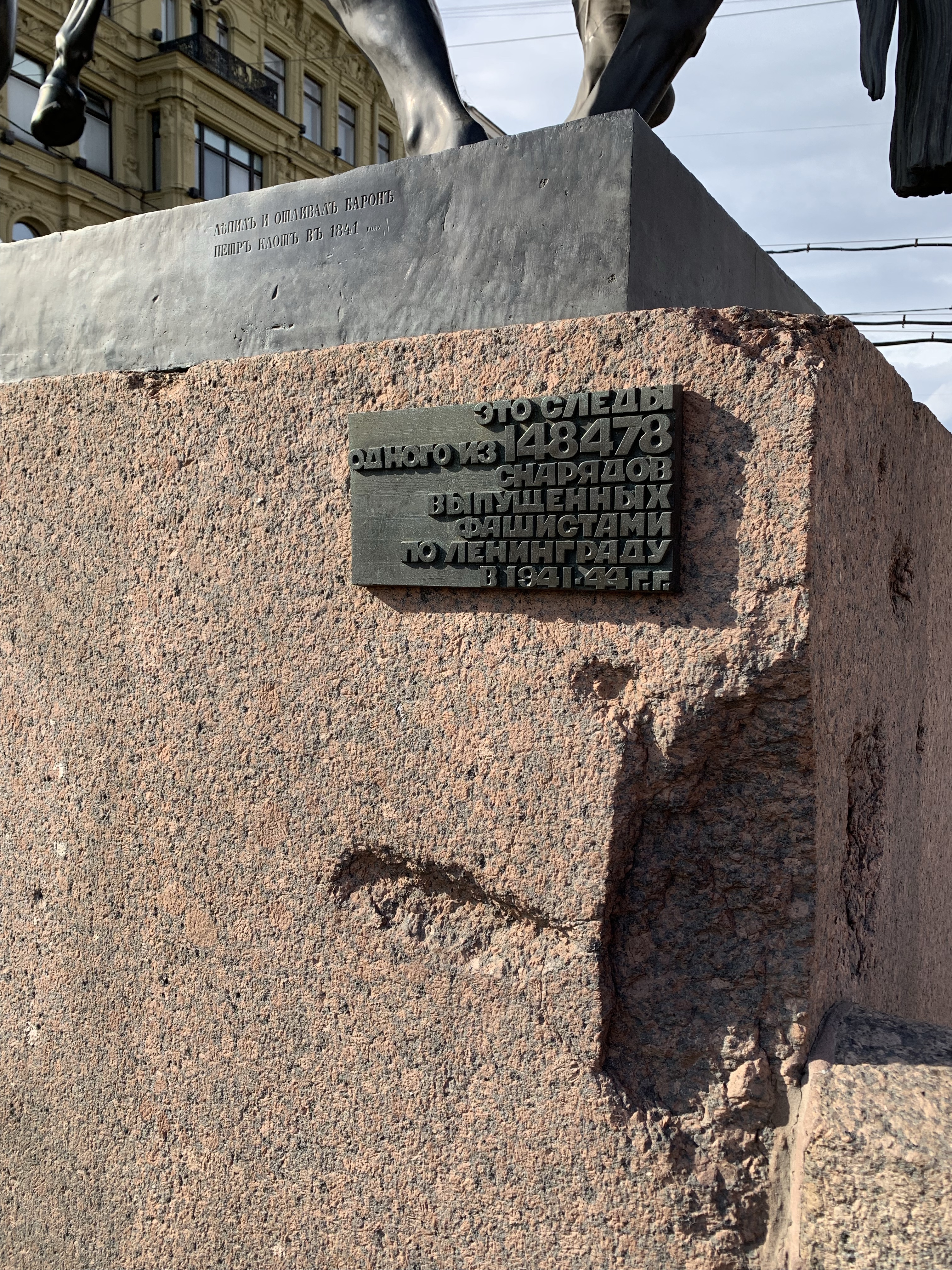 I believe the plaque marking the artillery damage can be translated as:

The statues were removed during the World War II siege of Leningrad and buried to preserve them. But the pedestal with the damage was left to serve as a reminder of that time.

Below are photos of the other 1841 sculpture. This one sits on the southeast corner. Again the horse’s front legs are up but this time the man appears to be trying to control the horse facing toward the horse instead of alongside him as in the previous sculpture. 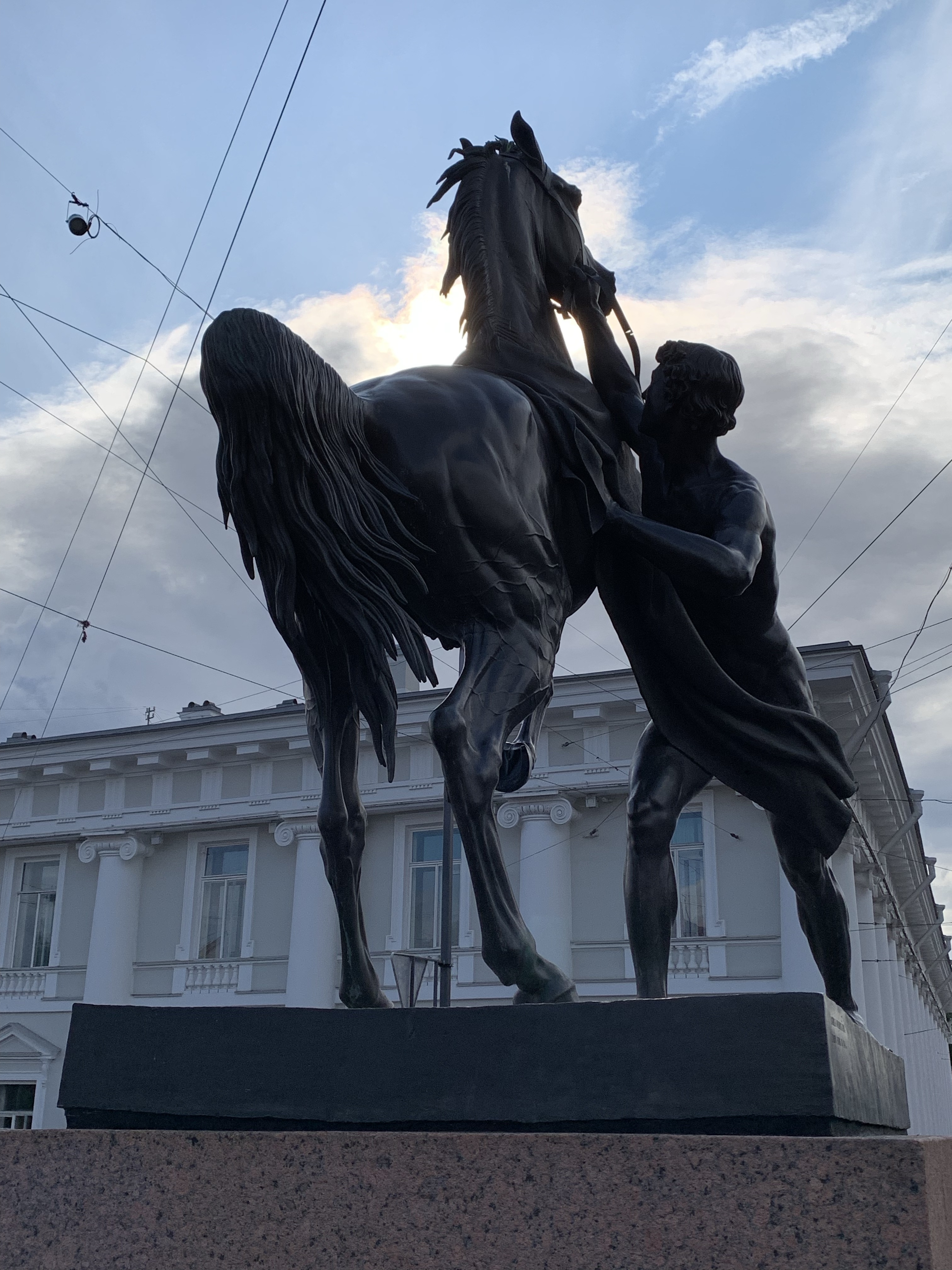 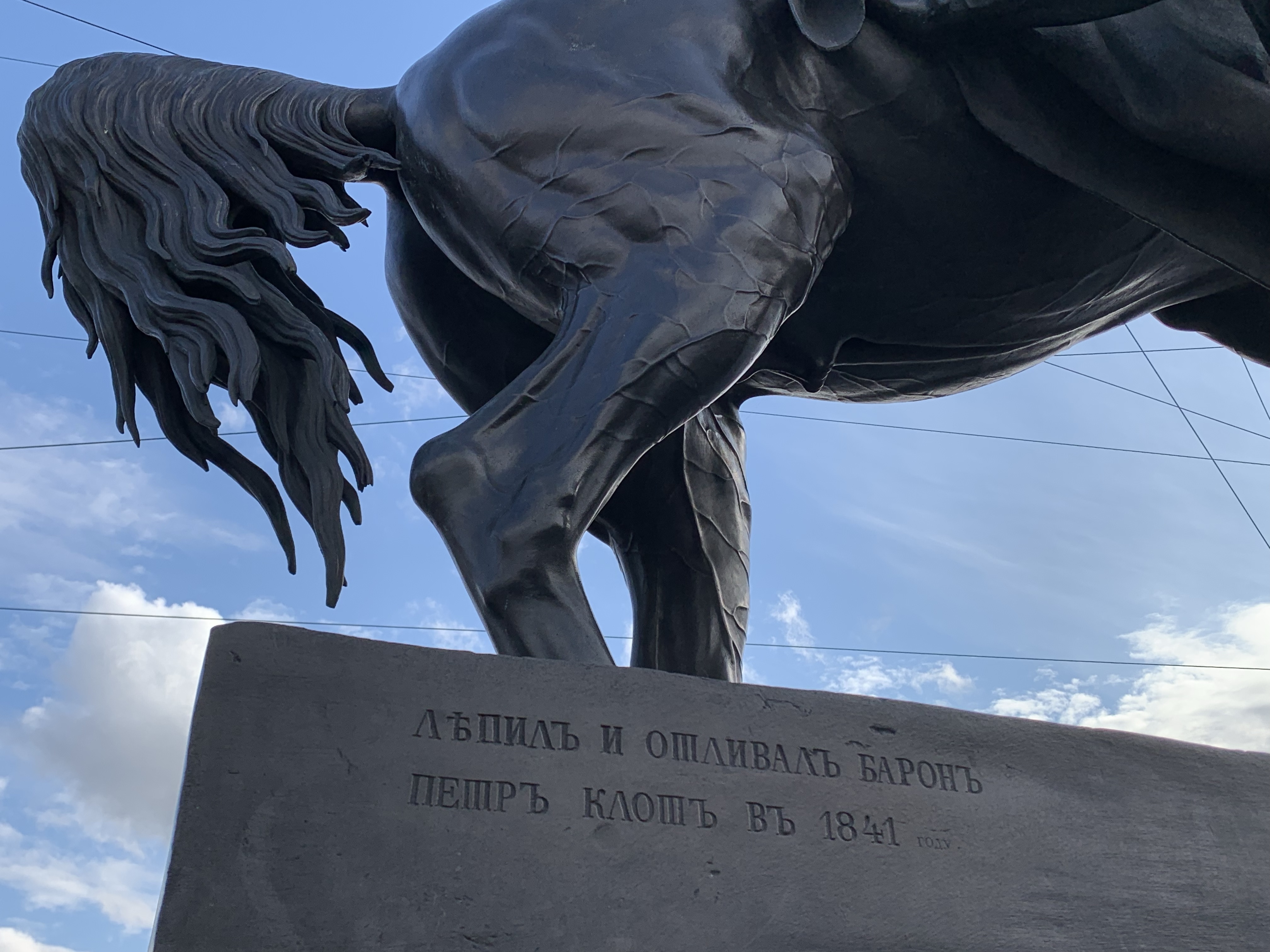 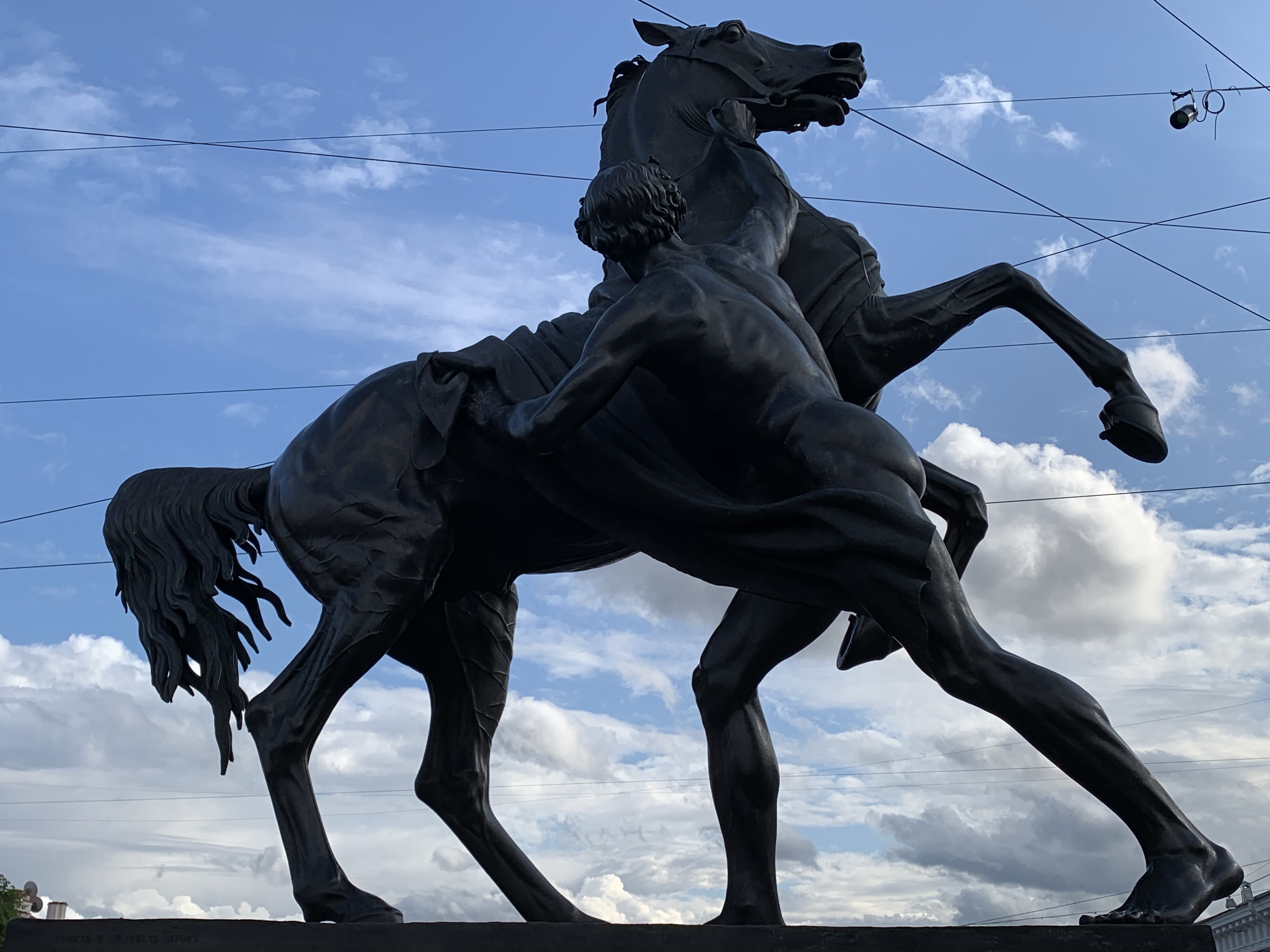 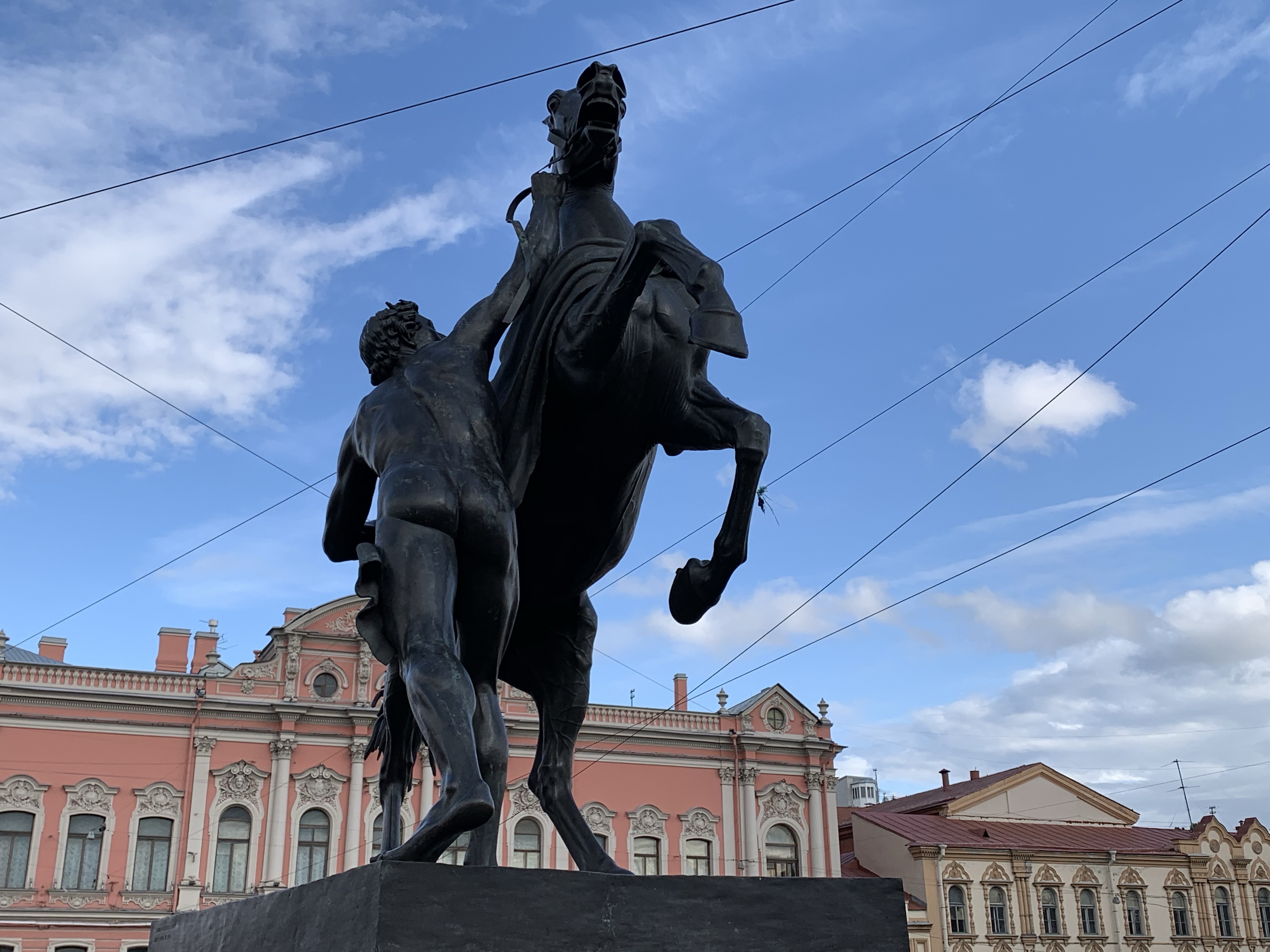 This one is from 1849. The sculpture sits on the northwest corner. The man is down on one knee. 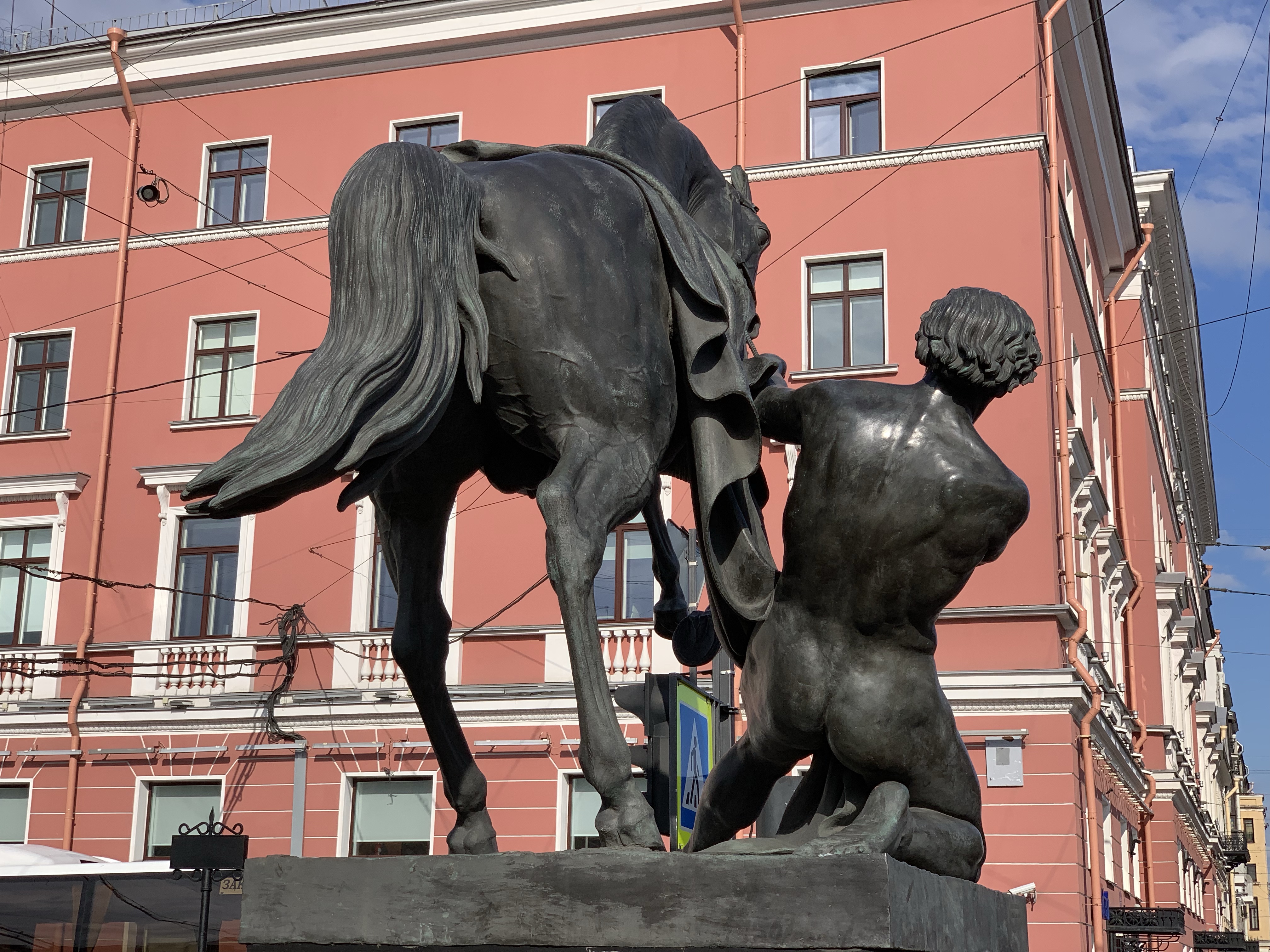 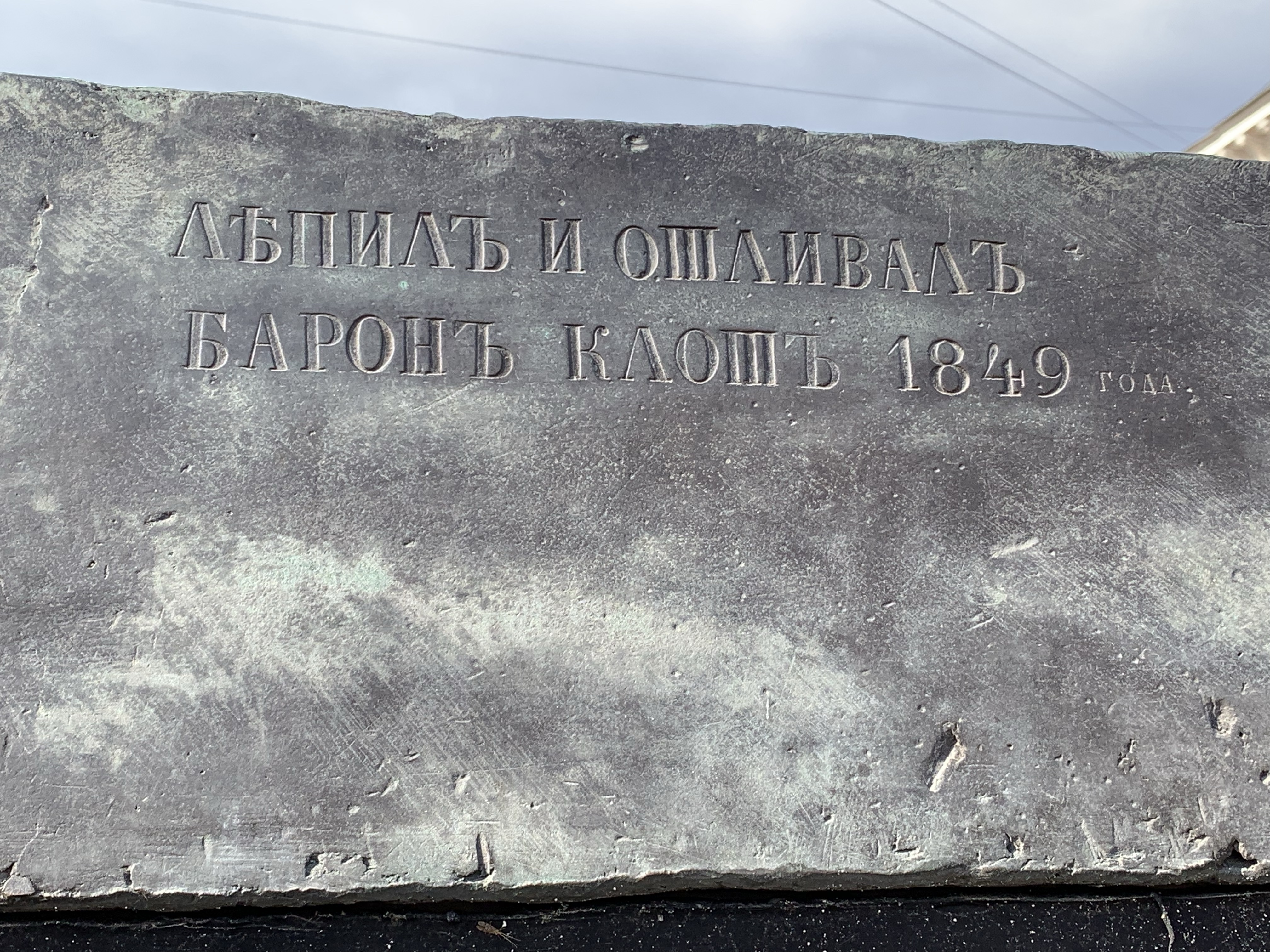 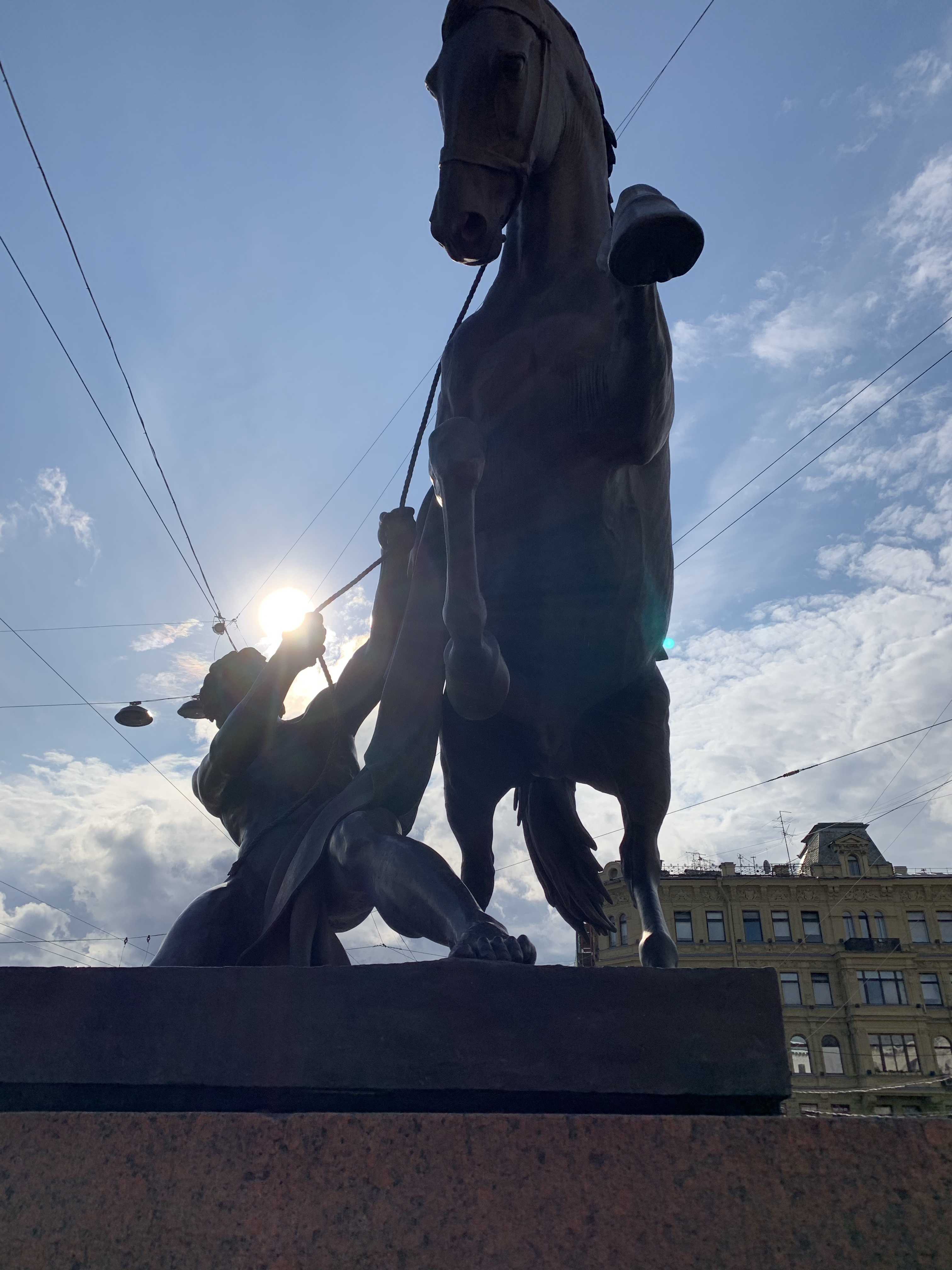 The fourth and final sculpture is from 1851. It sits on the northeast corner of the bridge. This horse is reared up the highest of any of the sculptures, and the man is in his most vulnerable position. 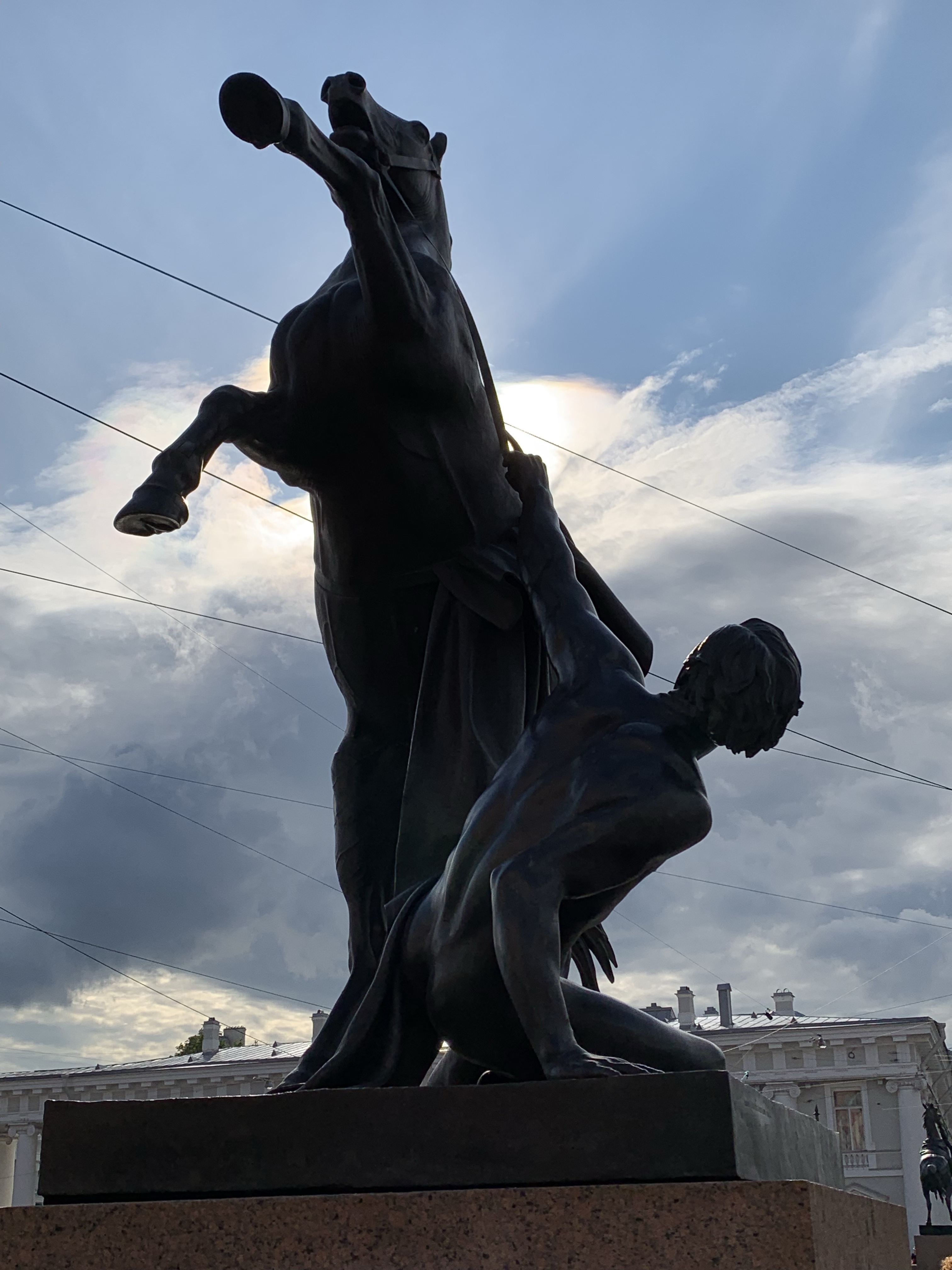 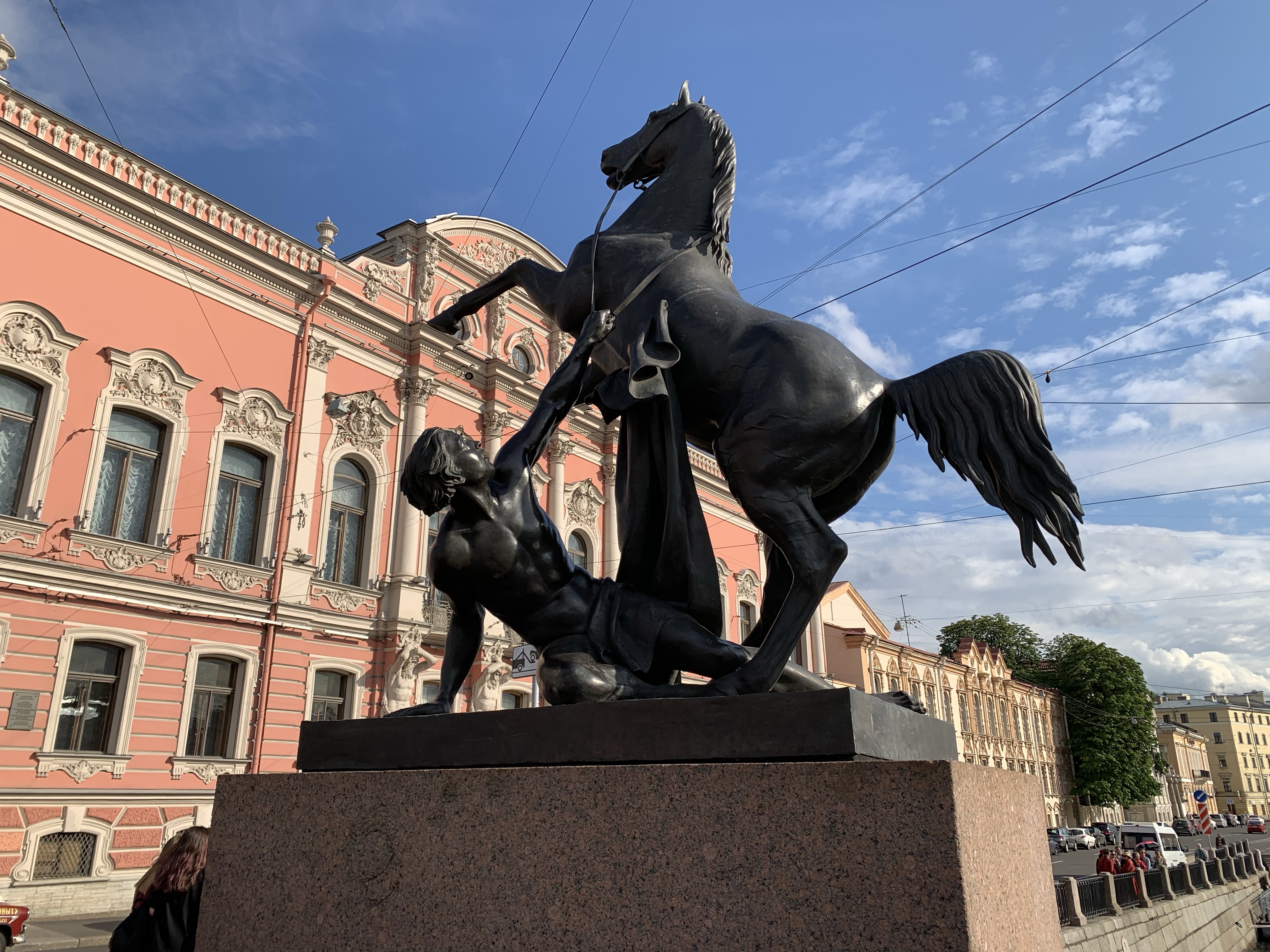 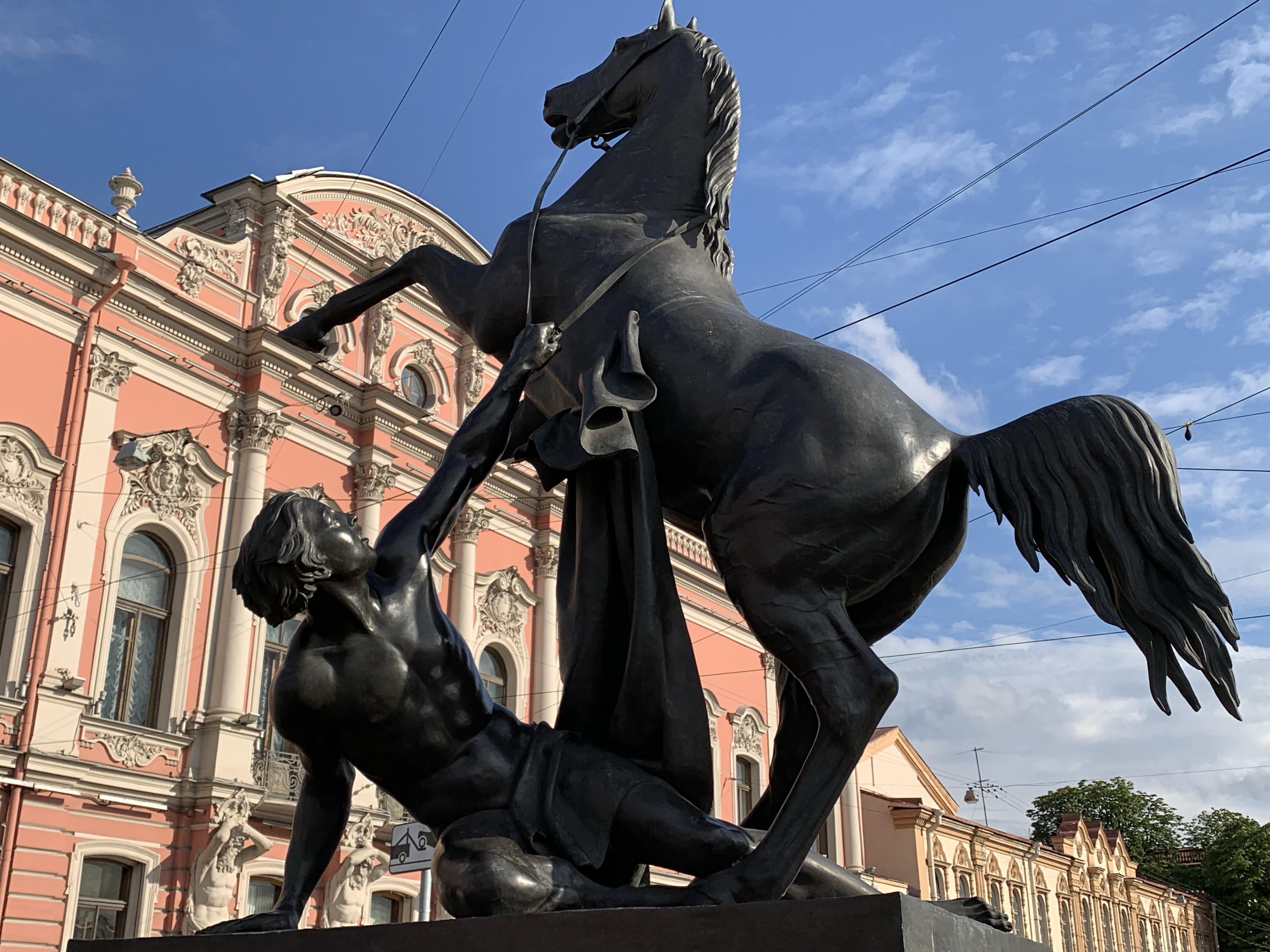 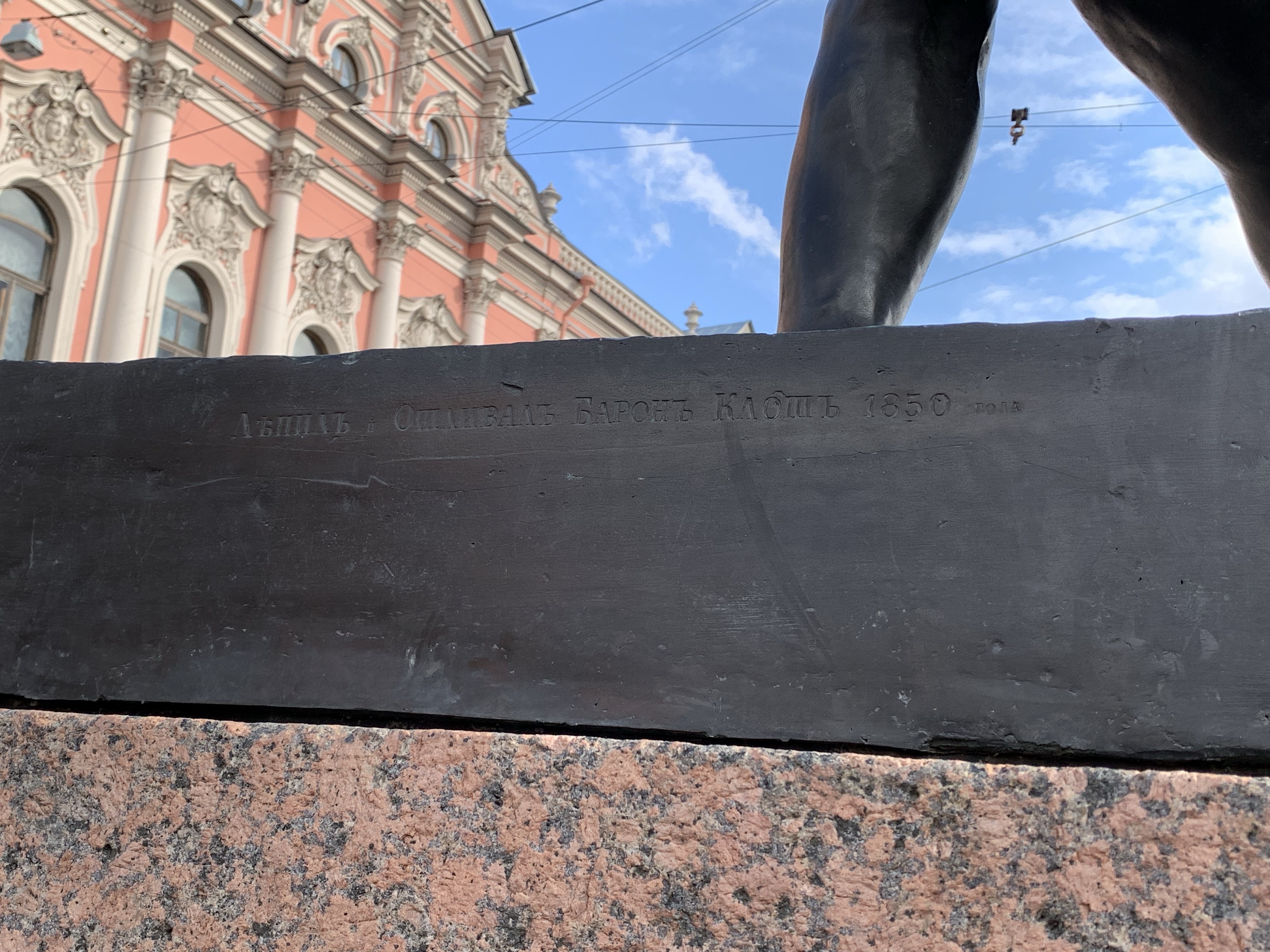 The statue of Peter the Great on his horse was commissioned by Catherine the Great. It sits in Senate Square in Saint Petersburg between the Neva River and St. Isaac’s Cathedral. 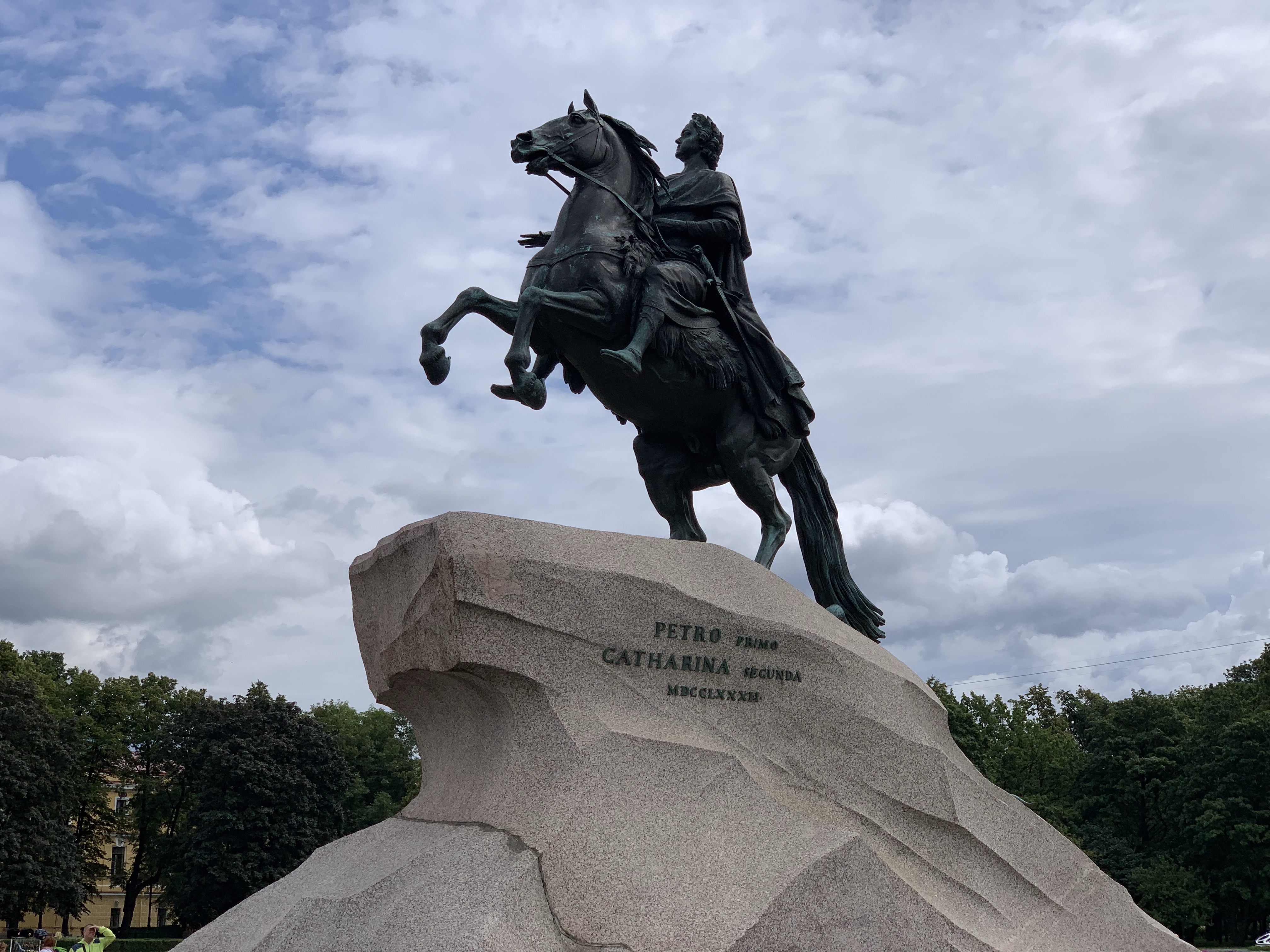 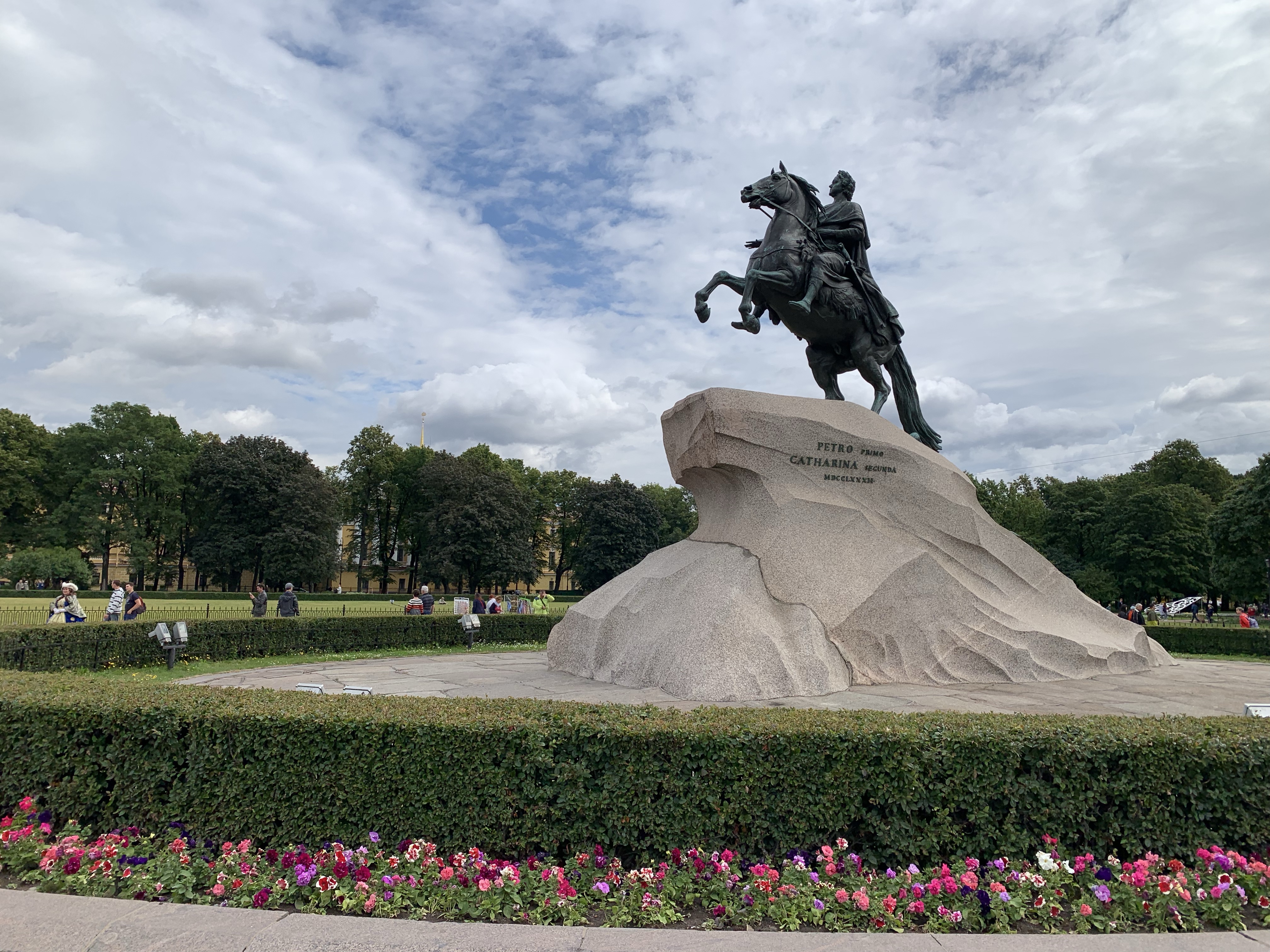 The statue site upon a massive piece of granite called the Thunder Stone. This foundation for the statue is claimed to be the biggest piece of stone ever moved. It weighed 1500 tonnes at the beginning, but was slowly carved in route. The team that moved it took nine months. 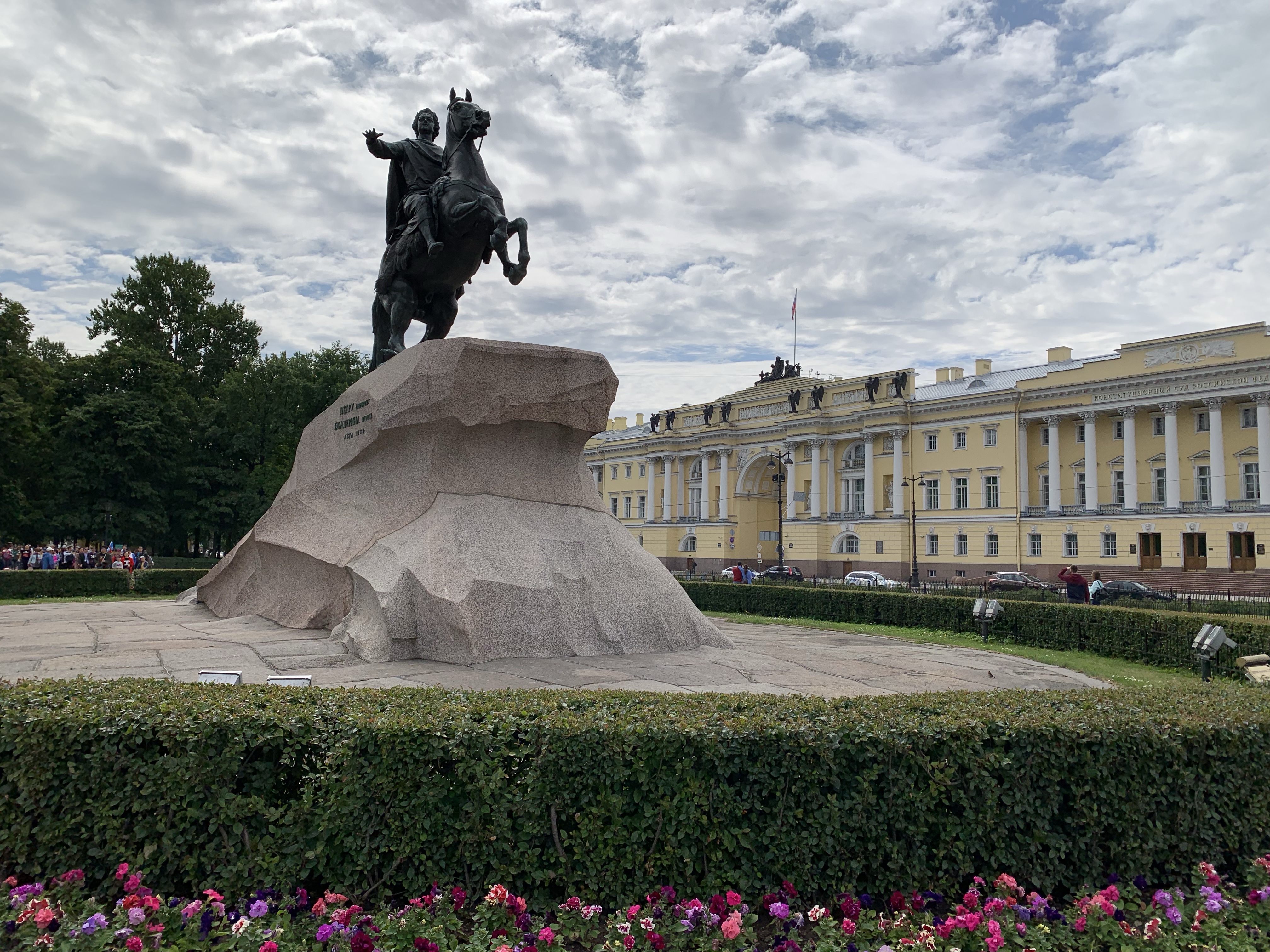 The statue is named for an Alexander Pushkin poem (see Pushkin’s statue in the next section). 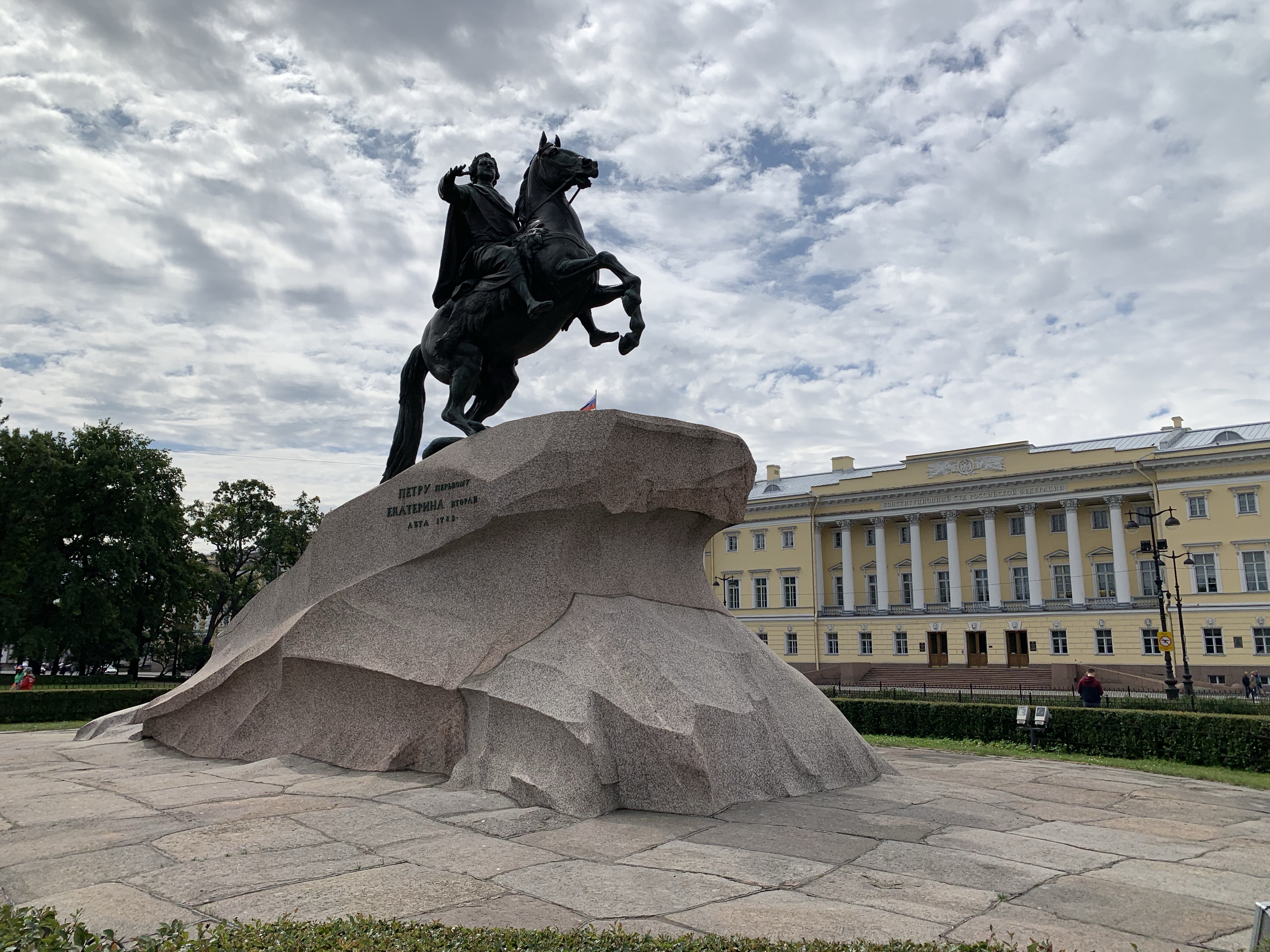 Peter’s horse can be seen trampling a snake (serpent). The serpent has been interpreted to represent Peter’s enemies, treachery and has many other interpretations. 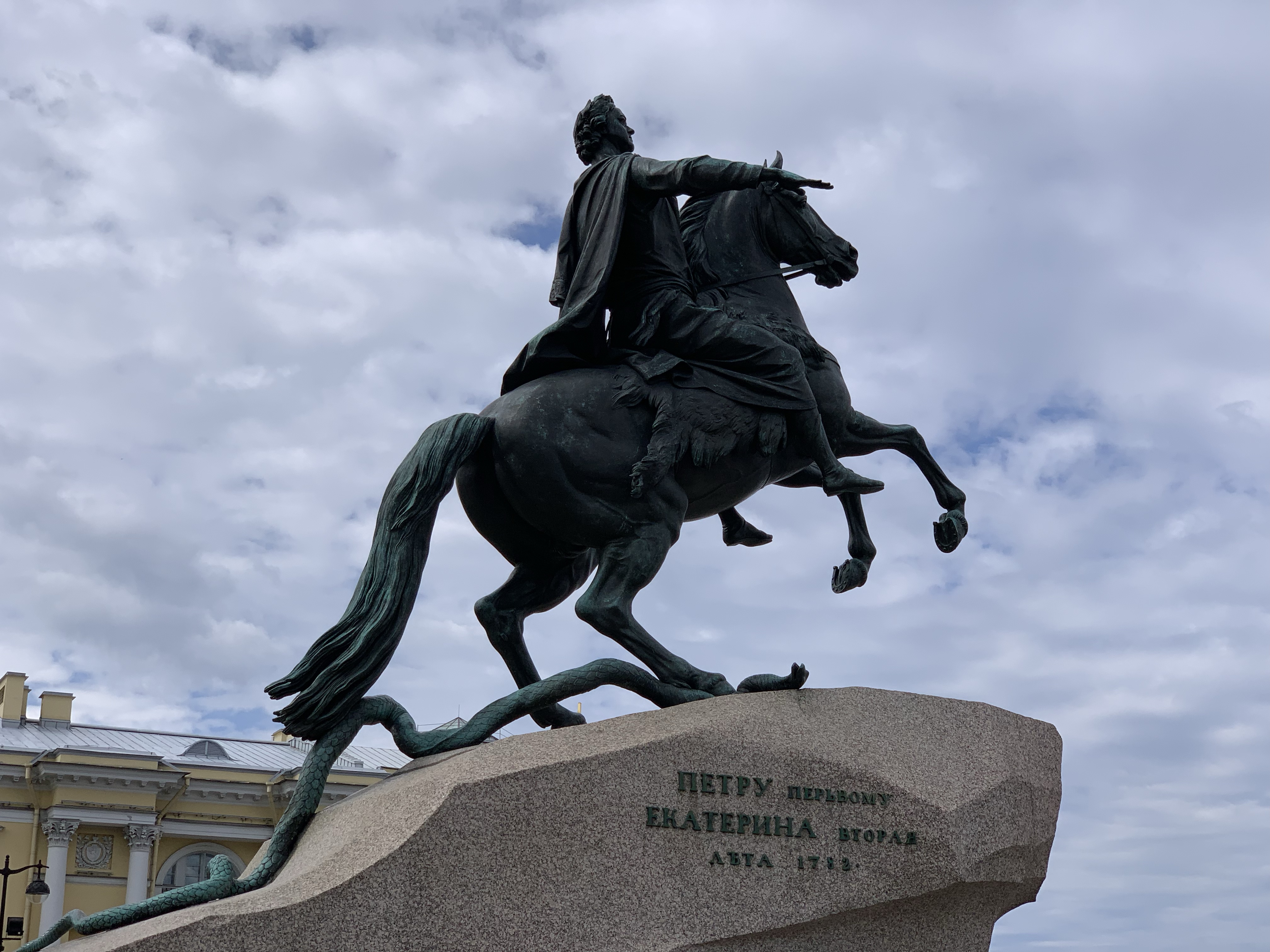 Legend says that while the statue stands in St. Petersburg an invading army will never take the city. The statue was not taken down during the World War II siege of Leningrad (though it was sandbagged), so the legend was correct. 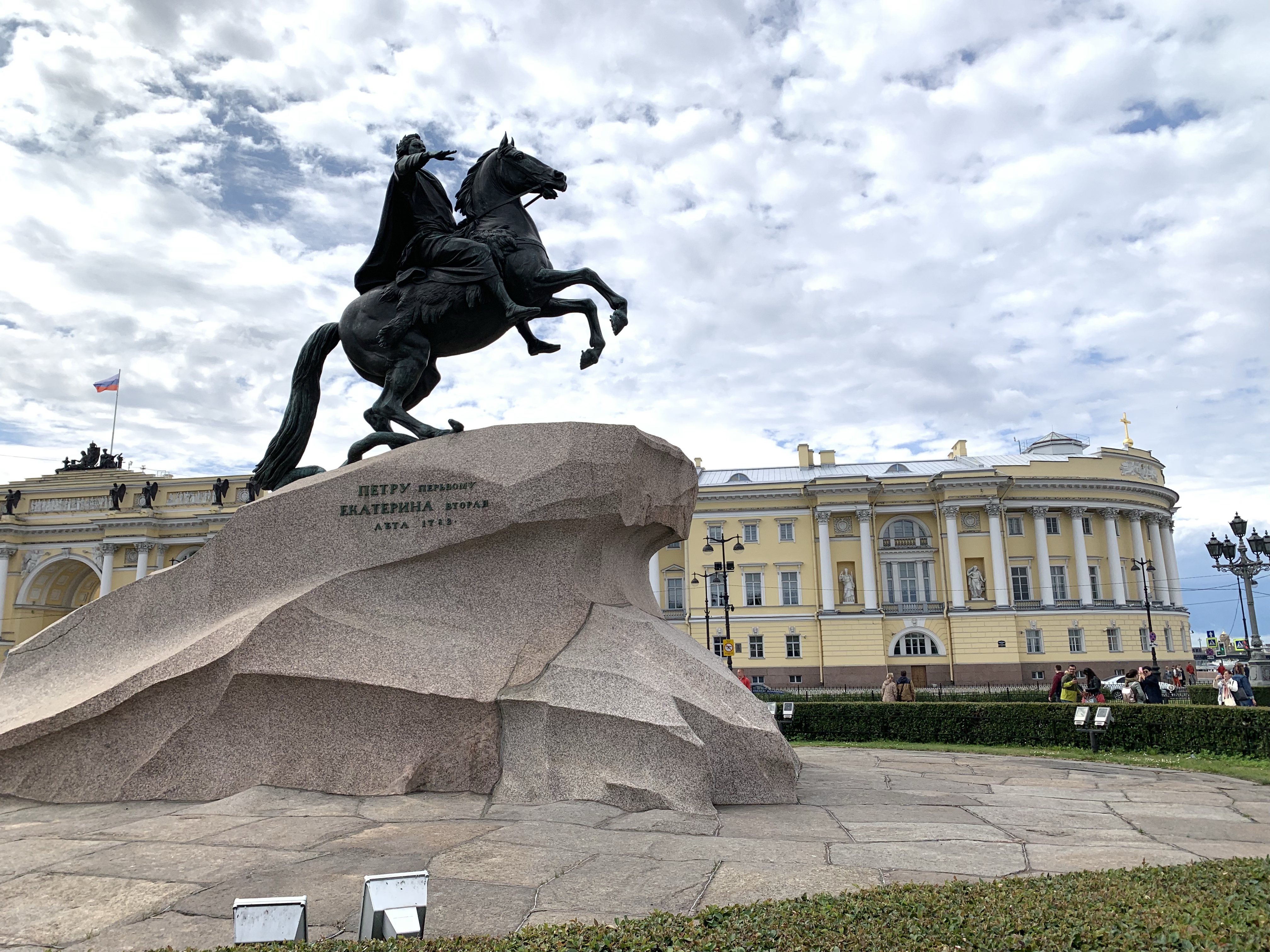 In the photo below St. Isaac’s cathedral can be seen in the background. 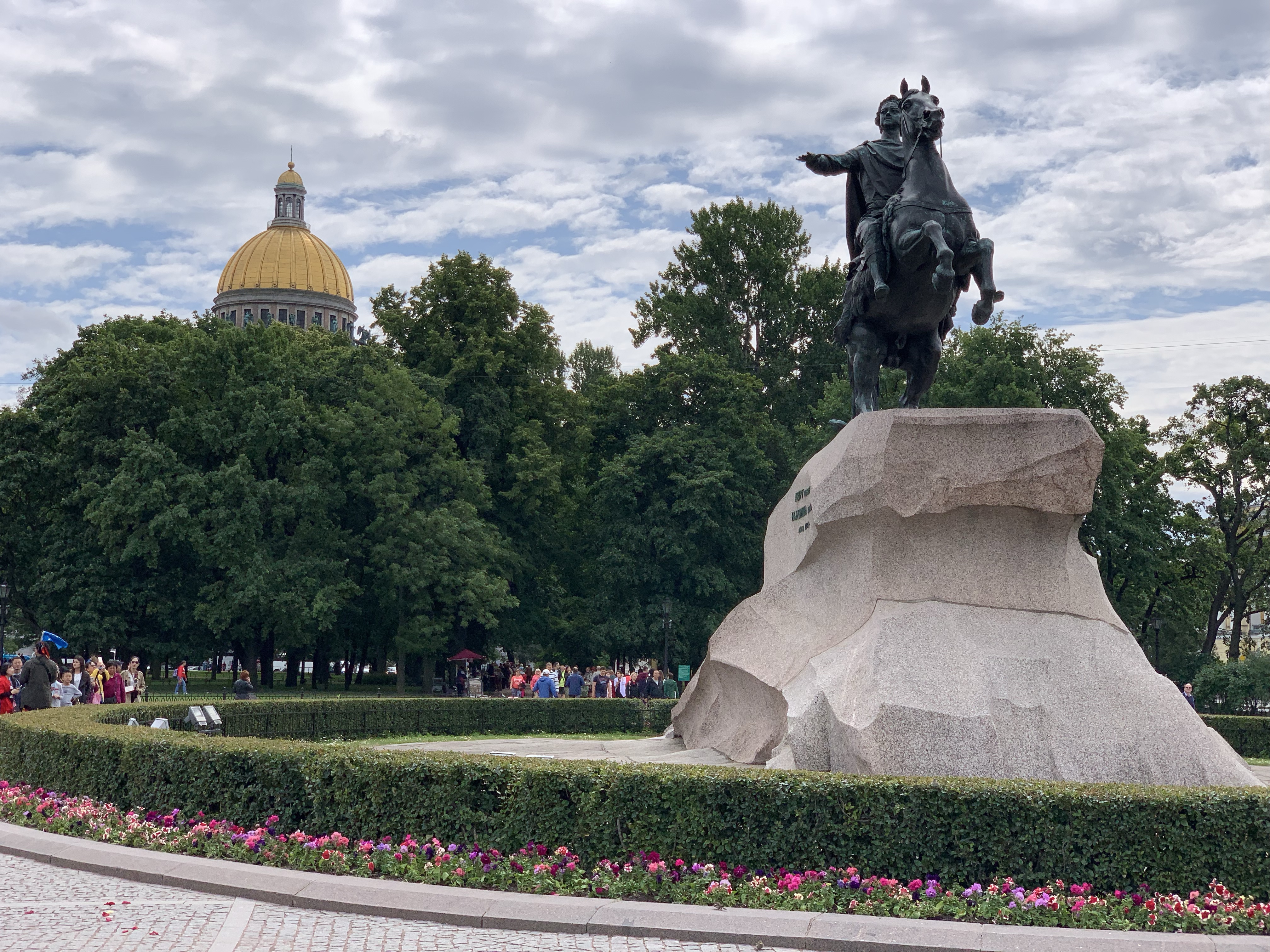 There were a couple of mornings that I got a chance to jog around Saint Petersburg.  As part of the tour we were staying at the Belmond Grand Hotel. One morning I jogged passed the Russian Museum and the park in front of it with its nice (but horseless and slightly desecrated by pigeons) statue of Alexander Pushkin. 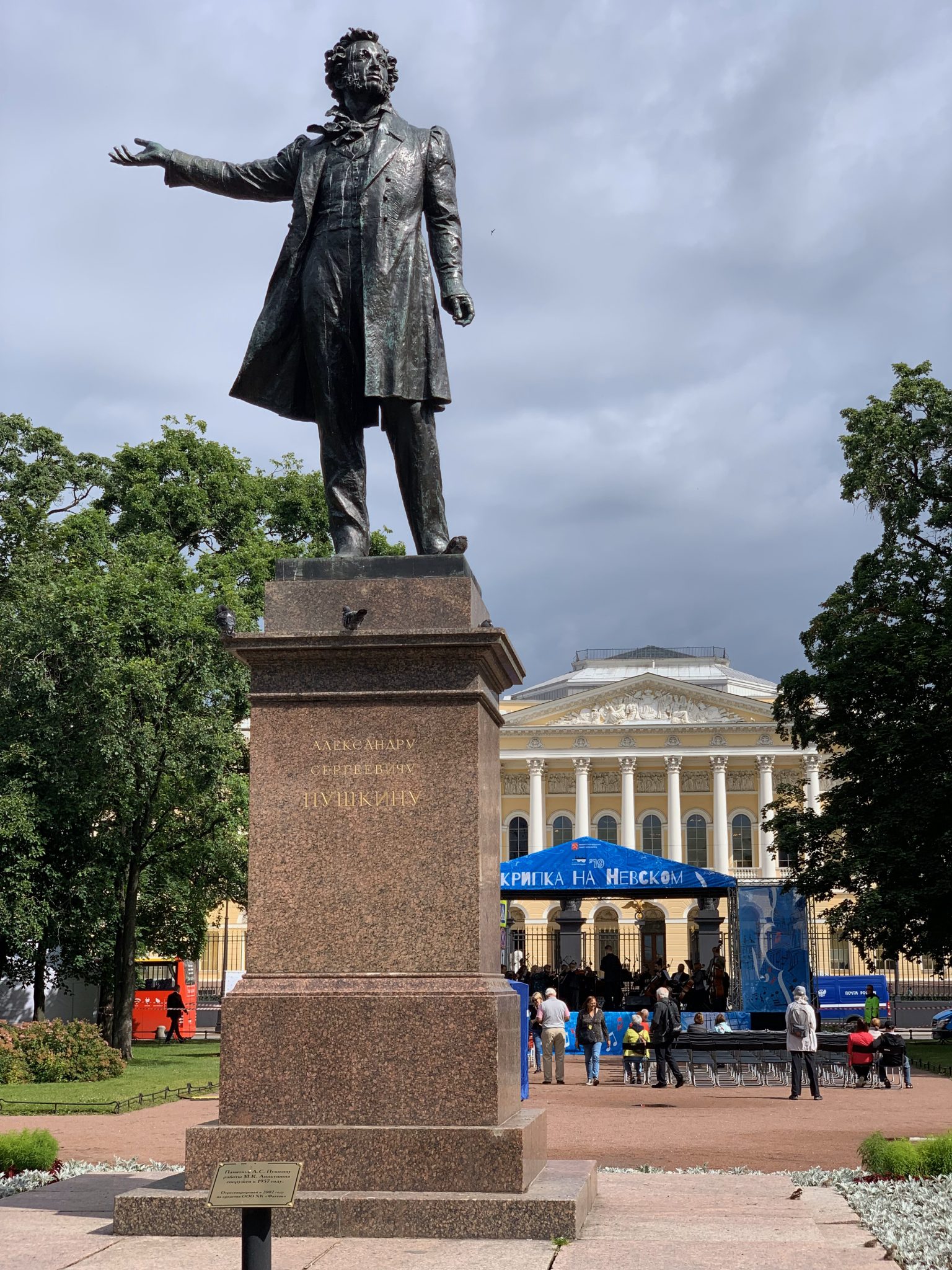 Around the corner I jogged past the Church of the Resurrection, called Church of the Savior on the Spilled Blood by St. Petersburgers, which had some scaffolding around it for restoration and repair.  The Church sits on the spot where Alexander II was fatally wounded in an assassination attempt in 1881. 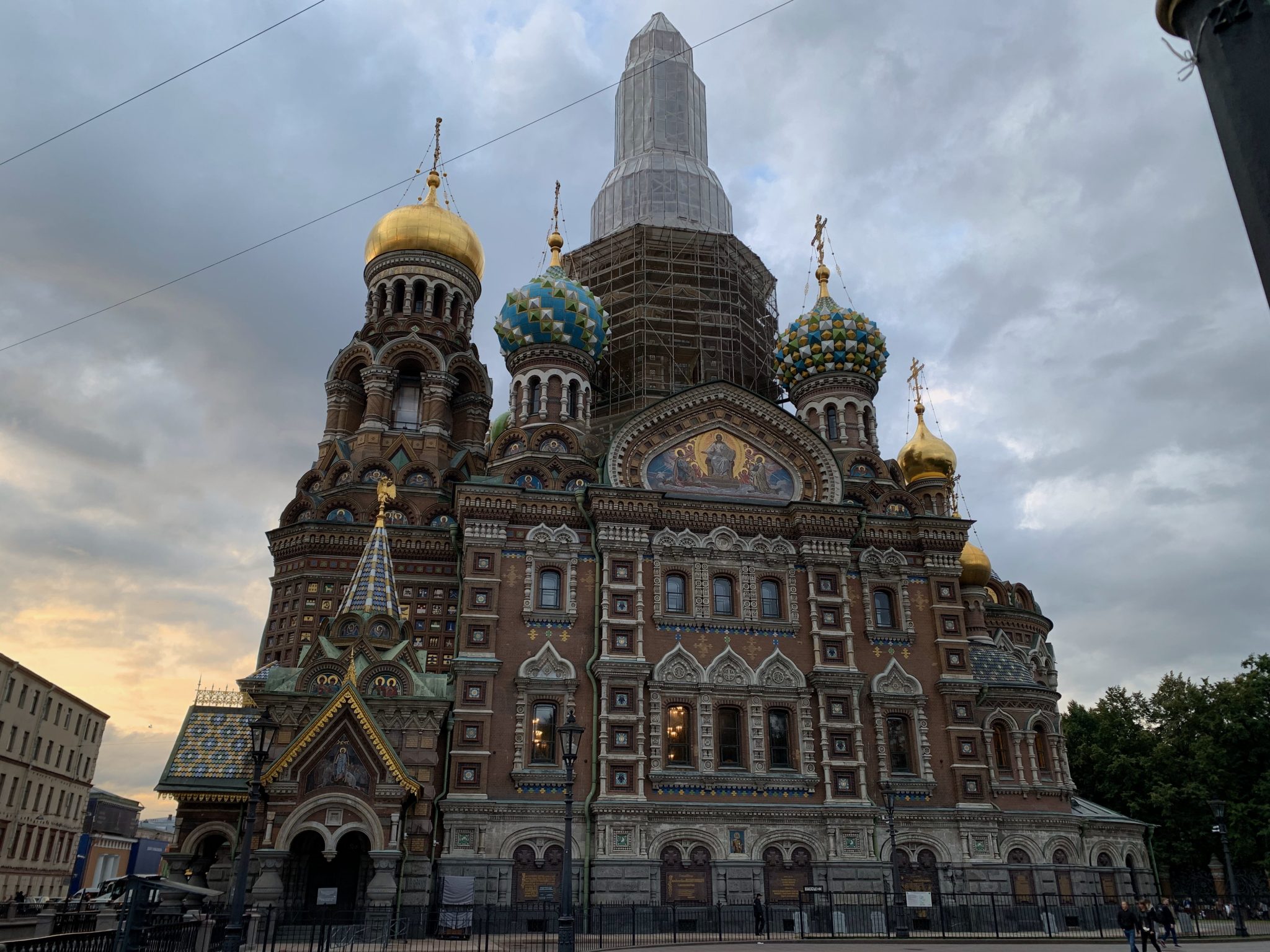 Past the church I ran past a park and encountered a statue of Alexander Suvorov (ÐÐ»ÐµÐºÑÐ°ÌÐ½Ð´Ñ€ Ð’Ð°ÑÐ¸ÌÐ»ÑŒÐµÐ²Ð¸Ñ‡ Ð¡ÑƒÐ²Ð¾ÌÑ€Ð¾Ð²). Suvorov, who died in St. Petersburg in 1800, is considered one of the greatest Russian military commanders. 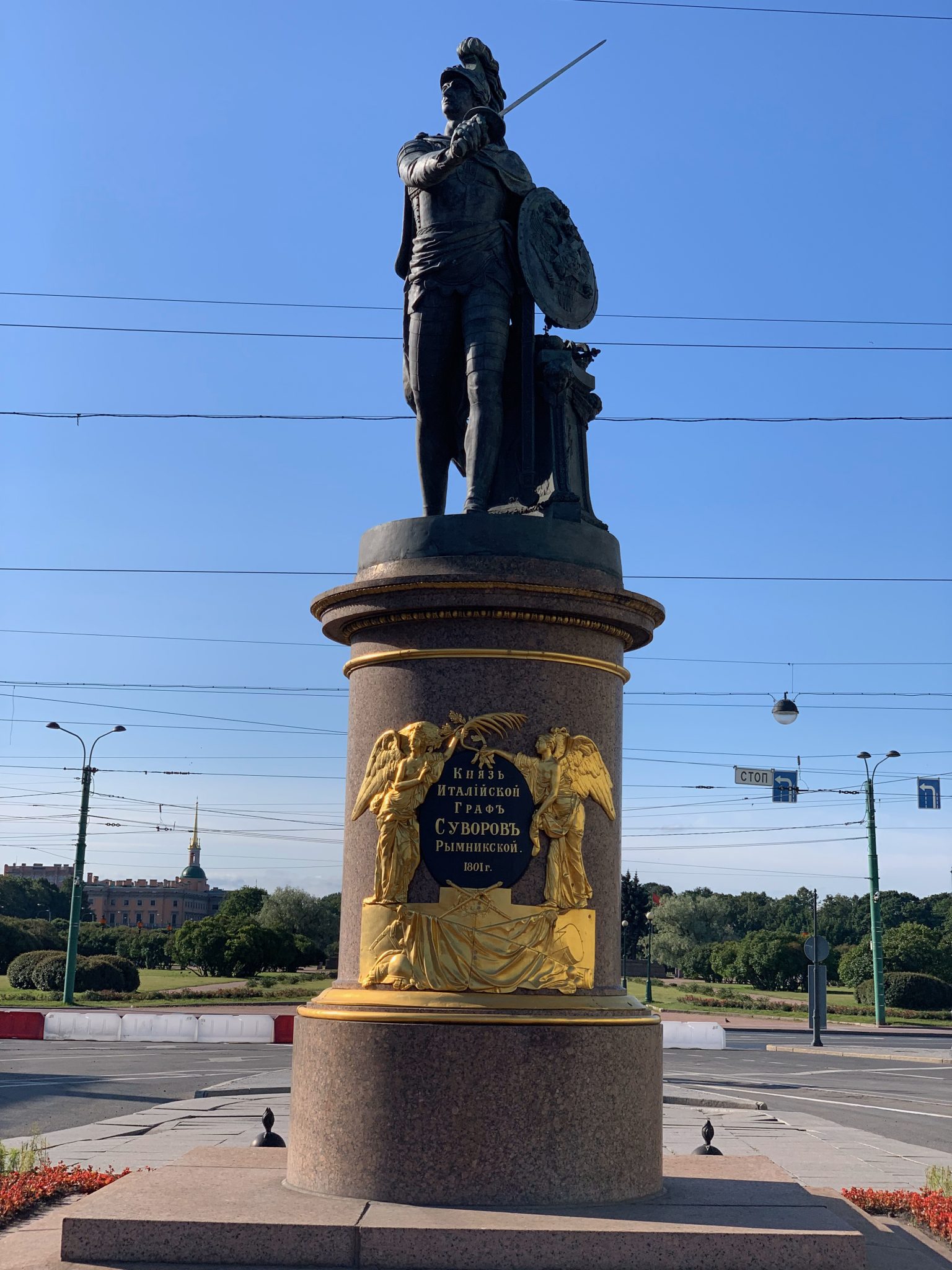 Back through the same park I encountered an eternal flame, a monument to Russian casualties of war. In the same park, I was stopped by two gents who spoke no English. Through gestures and maps (and the iConverse app!), I helped them find the directions to where they were going. I determined they were from Belarus. Once they learned I was from Texas, they wanted to know what I thought of Russia. After everything I’d seen in the past couple of weeks, all I could tell them was that it was a beautiful and magnificent place. 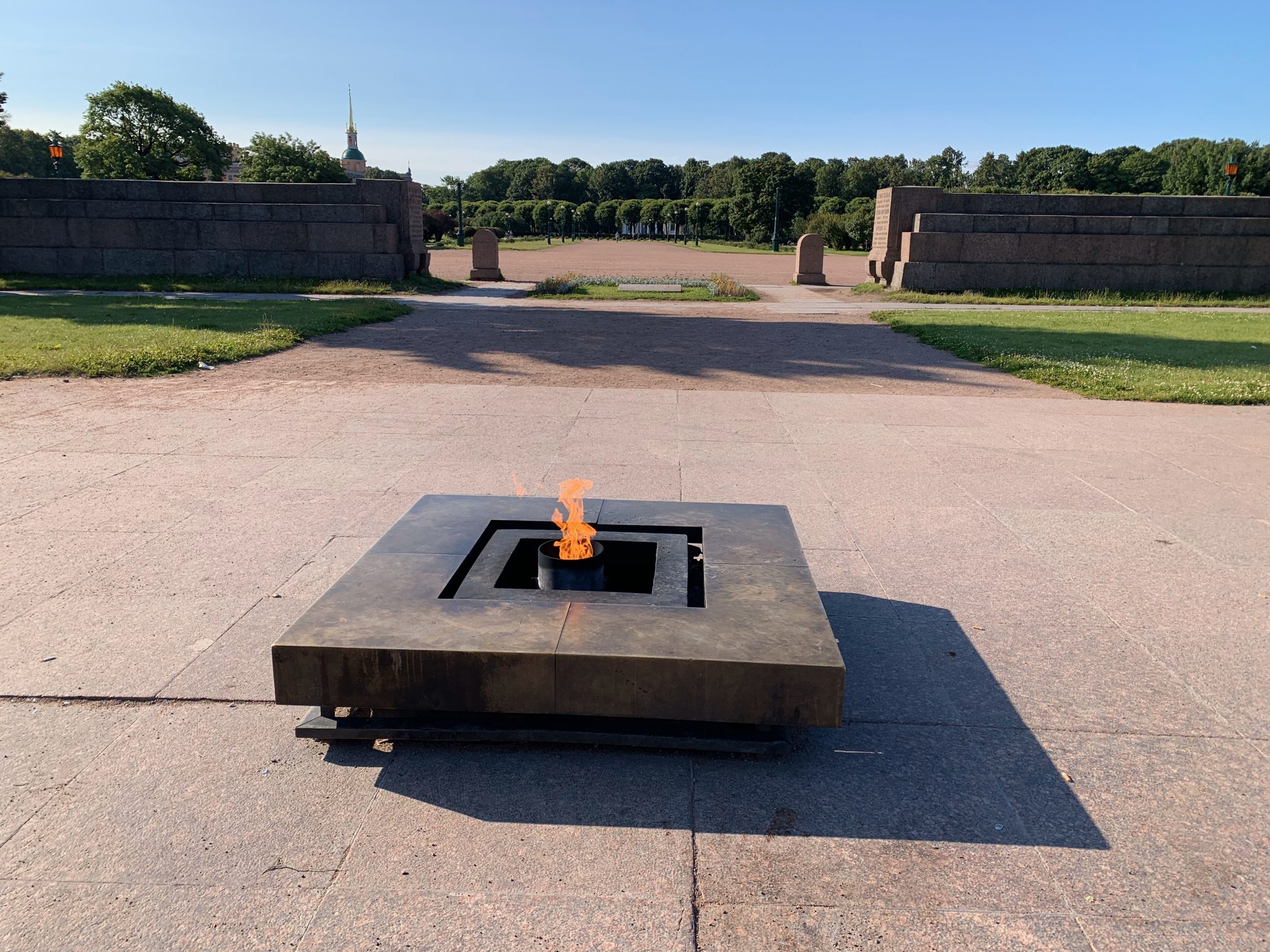 Further on I jogged past another statue of a man with a crown on a horse. I didn’t realize it at the time but this statue was on the street in front of Mikhailovskiy Castle (St. Michel’s castle). And, to tie it all together, this is another bronze equestrian monument to Peter I.

Peter commissioned the statue in 1716 with sculptor Carlo Bartomelo Rastrelli. It took Rastrelli several years to build a model. Peter approved it in 1724, but died the next year. The Bronze Horseman from the previous section was commissioned and erected, while the casting of this sculpture sat in a warehouse. in 1800, Paul I erected the monument. He has the base inscribed  as can be seen in the photo, which apparently translates to “To Great Grandfather from Great Grandson.” 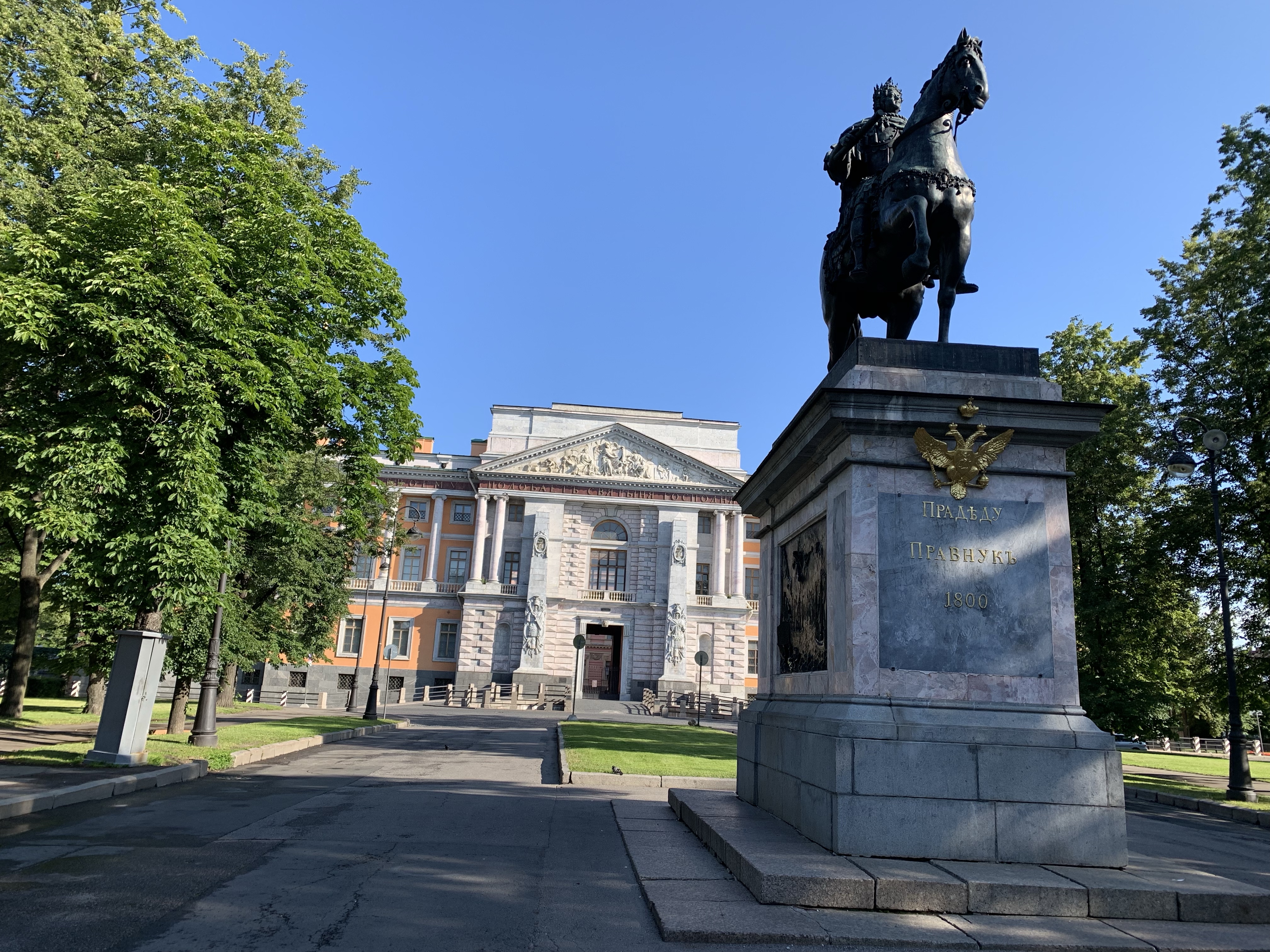 The reliefs on the side of the monument depict Russian victories over Sweden. 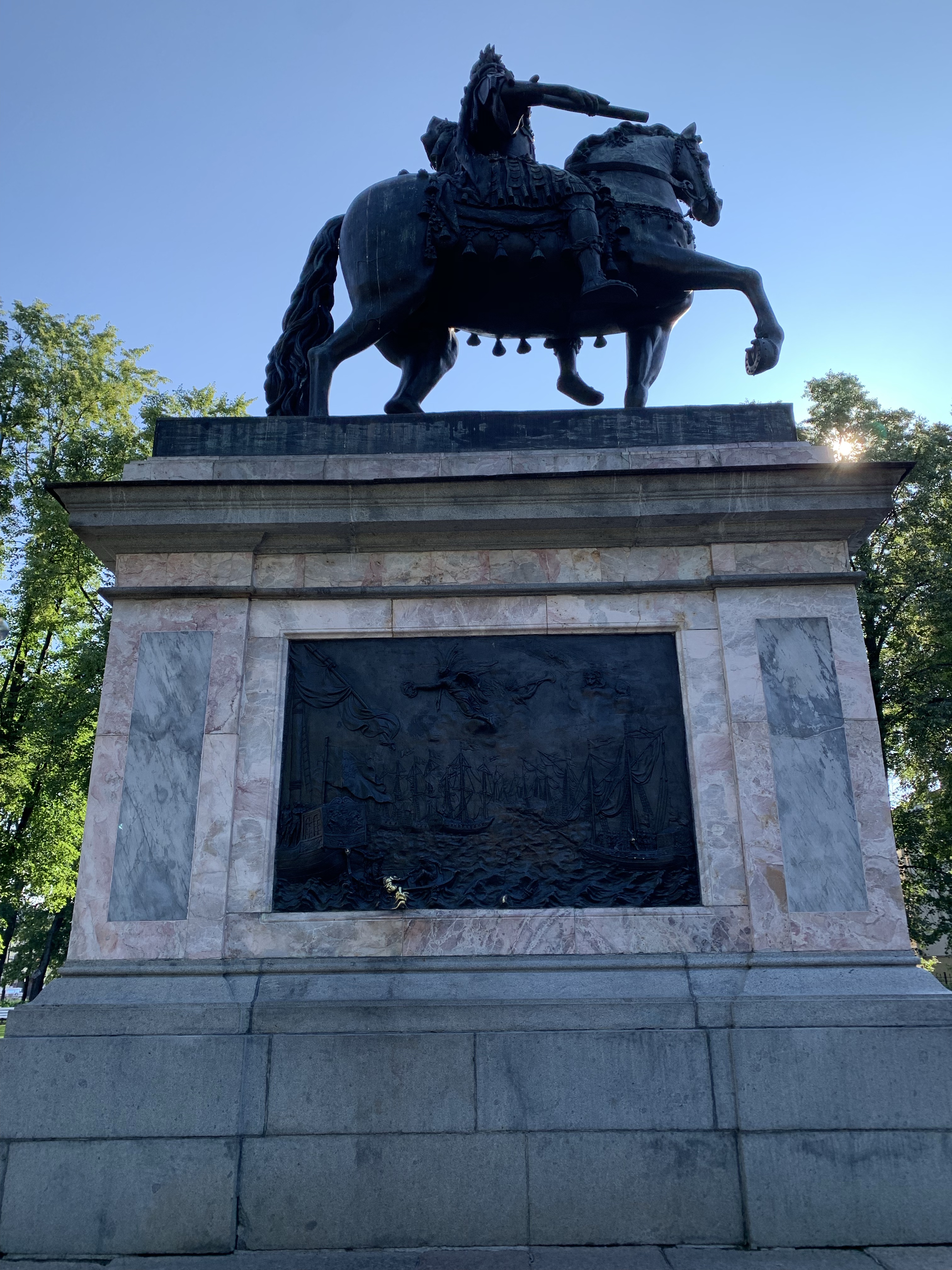 I took one more shot from far away as I jogged off to explore more of Saint Petersburg.. 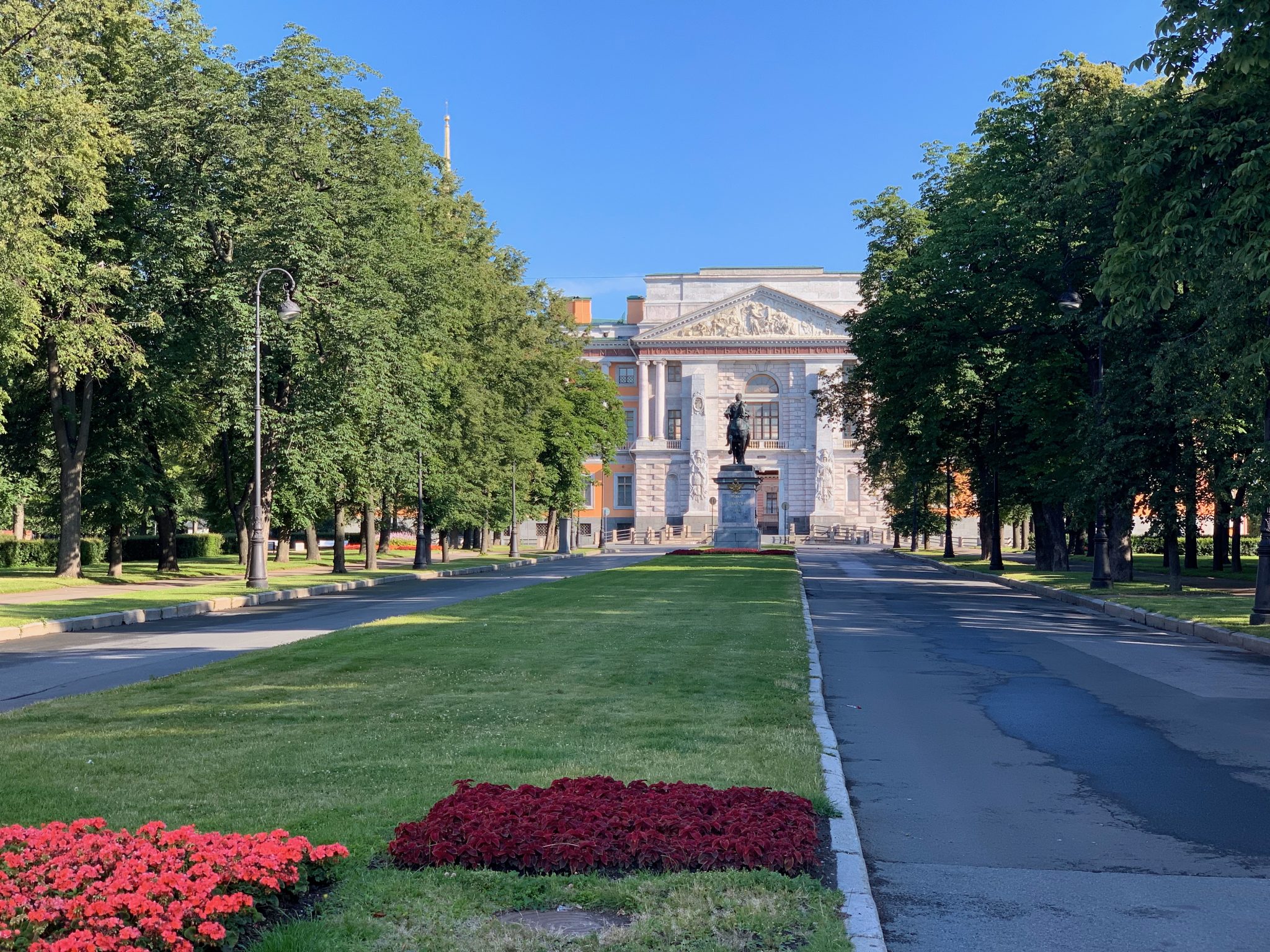