We’ll all have smartphones soon

A confluence (or is it a convergence or a singularity or one of those other large impressive words) of events in the wireless world point toward yet another technological inflection point. While most people in the US have cell phones, according to NPD the group they classify as “consumers” purchased smartphones 19% of the time from January to July of this year; we can easily assume that the group classified as “business” purchasers had a much higher average. See worldwide smart phone market chart from Canalys by way of computerworld.com for comparable worldwide trends. 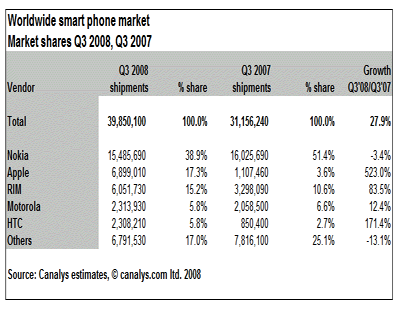 The convergence happens as people move ‘up’ from candy-bar phones and ‘down’ from laptops to smartphones for most of their needs. It is looking more and more that smart phones will begin to take the majority of functionality of laptops in the very near future, similar to how laptops supplanted many of the jobs desktops were required for. The main features that have been lacking have been battery life (with GPS, bluetooth, WiFi and all other functions always on), application availability and general acceptance of smart phones (which makes many things easier, including IT support, development, etc.). Several factors point to solutions to these shortcomings: