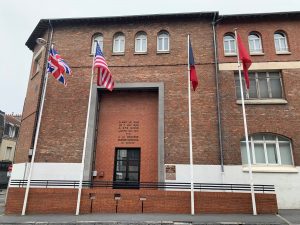 During our 30 year anniversary tour we did finally make it to Reims. Our trip to Reims by train from Paris included the usual activities of champagne tasting and visiting the amazing Reims cathedral. We also visited a building less than a mile walk from the train station which was the site of the first German surrender during World War II. This is the Museum of the Surrender (Musée de la Reddition) in Reims.

The surrender took place in secret in the early morning hours of May 7th, 1945, around 3am. The headquarters of SHEAF (the Supreme Headquarters Allied Expeditionary Force) were in the Collège Moderne et Technique, which is now the museum and a high school. The reception/ticket office and movie room where and intro movie is played are on the first floor, with the surrender room and two large display rooms are on the second floor.

The movie walks through Reims’ involvement in the war (including occupation and liberation), being chosen as SHEAF’s headquarters (as well as HQ for the 101st Airborne staff), and more details on the surrender.

The surrender in Reims was meant to be kept secret. The Russians attacking from the east into Germany were taking no prisoners, mostly in retaliation to similar tactics employed by Germany in its invasion of Russia (I highly recommend Dan Carlin’s Hardcore History podcast on the Russian front called “Ghosts of the Ostfront.”). The delay was supposed to allow for the surrender of Germans through to the west (the American, British, French and other Allied forces) who were taking prisoners.

In his last book in his series on The Second World War entitled “Triumph and Tragedy“, Winston Churchill describes these events simply:

Friedeburg went on to Eisenhower’s headquarters at Reims, where he was joined by General Jodl on May 6. They played for time to allow as many soldiers and refugees as possible to disentangle from the Russians and come over to the Western Allies, and they tried to surrender the Western Front separately. Eisenhower imposed a time-limit and insisted on a general capitulation. Jodl reported to Doenitz: “General Eisenhower insists that we sign today. If not, the Allied fronts will be closed to persons seeking to surrender individually. I see no alternative: chaos or signature. I ask you to confirm to me immediately by wireless that I have full powers to sign capitulation.”

The instrument of total, unconditional surrender was signed by General Bedell Smith and General Jodl, with French and Russian officers as witnesses at 2:41am on May 7. Thereby all hostilities ceased at midnight on May 8. The formal ratification by the German High Command tool place in Berlin, under Russian arrangements, in the early hours of May 9. (pgs. 539-540)

Because of these two different surrenders, Europeans and the United States celebrate Victory in Europe (VE or V-E day) on May 8 1945, while Russia notes May 9th as Victory Day.

The room where the surrender took place is well preserved. The table with nameplates for the participants sits surrounded by walls covered with maps. 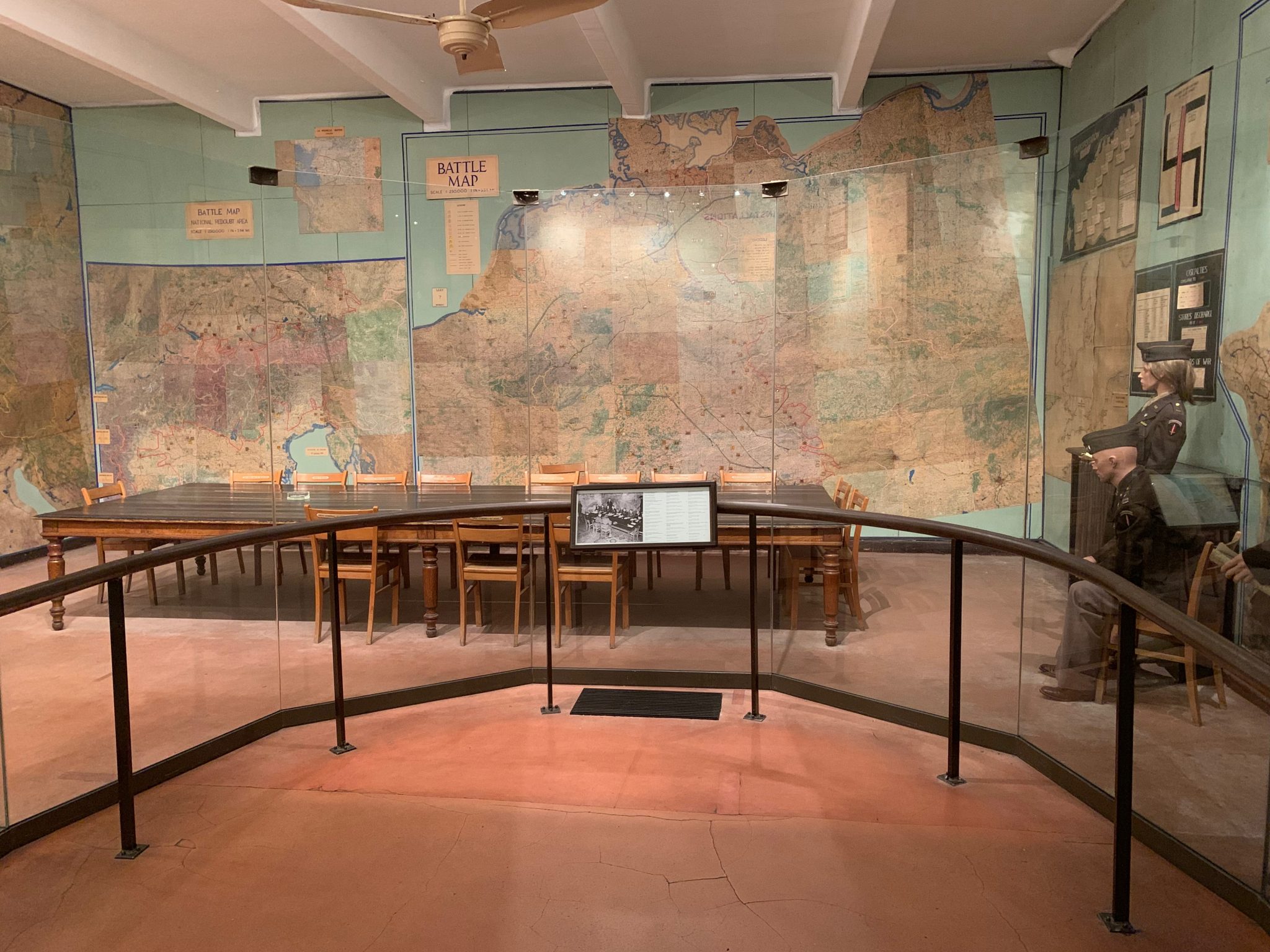 These are the maps to the left of the table. 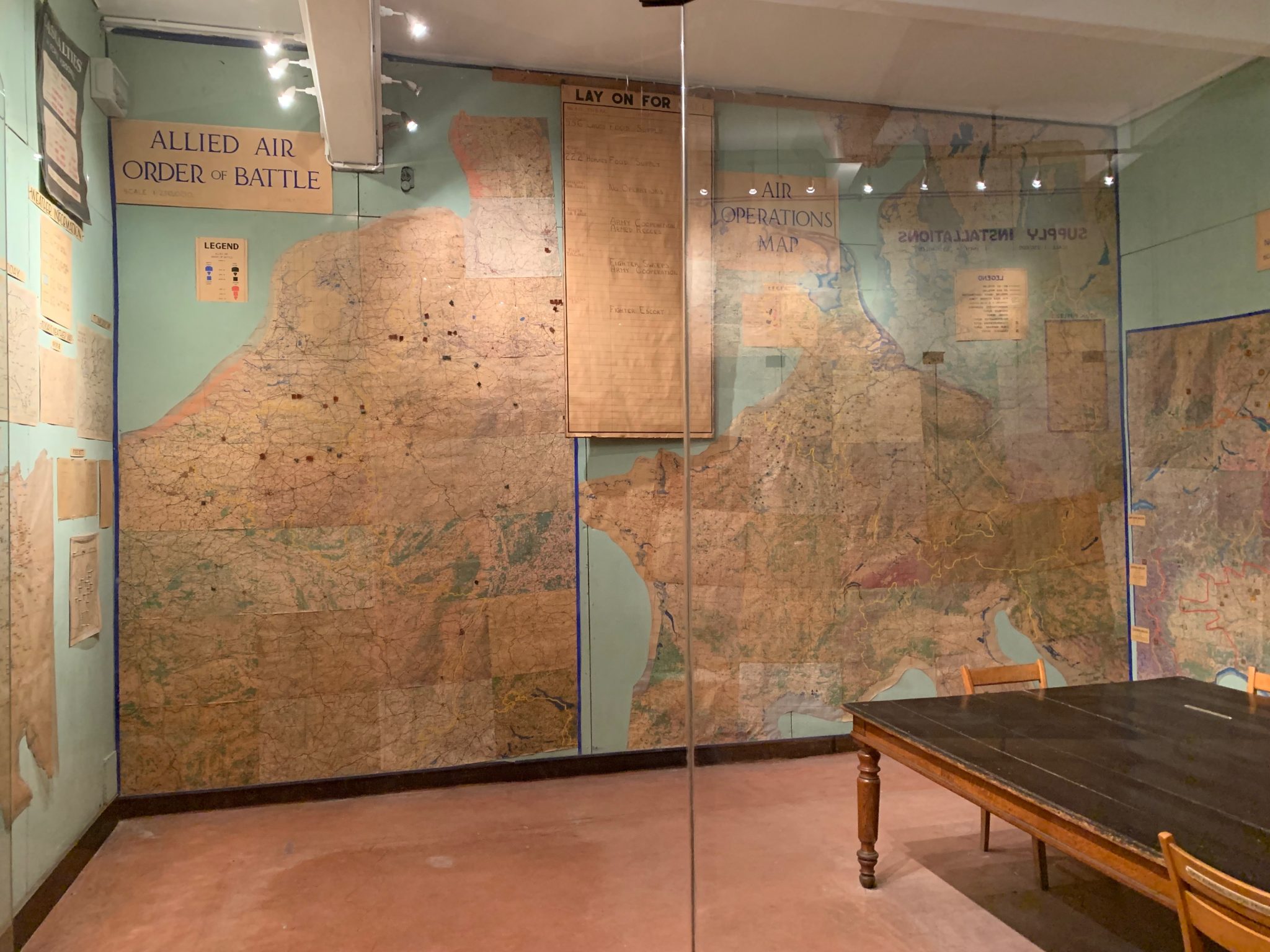 The nameplates are in front of where the participants would sit and also on the backs of the chairs. 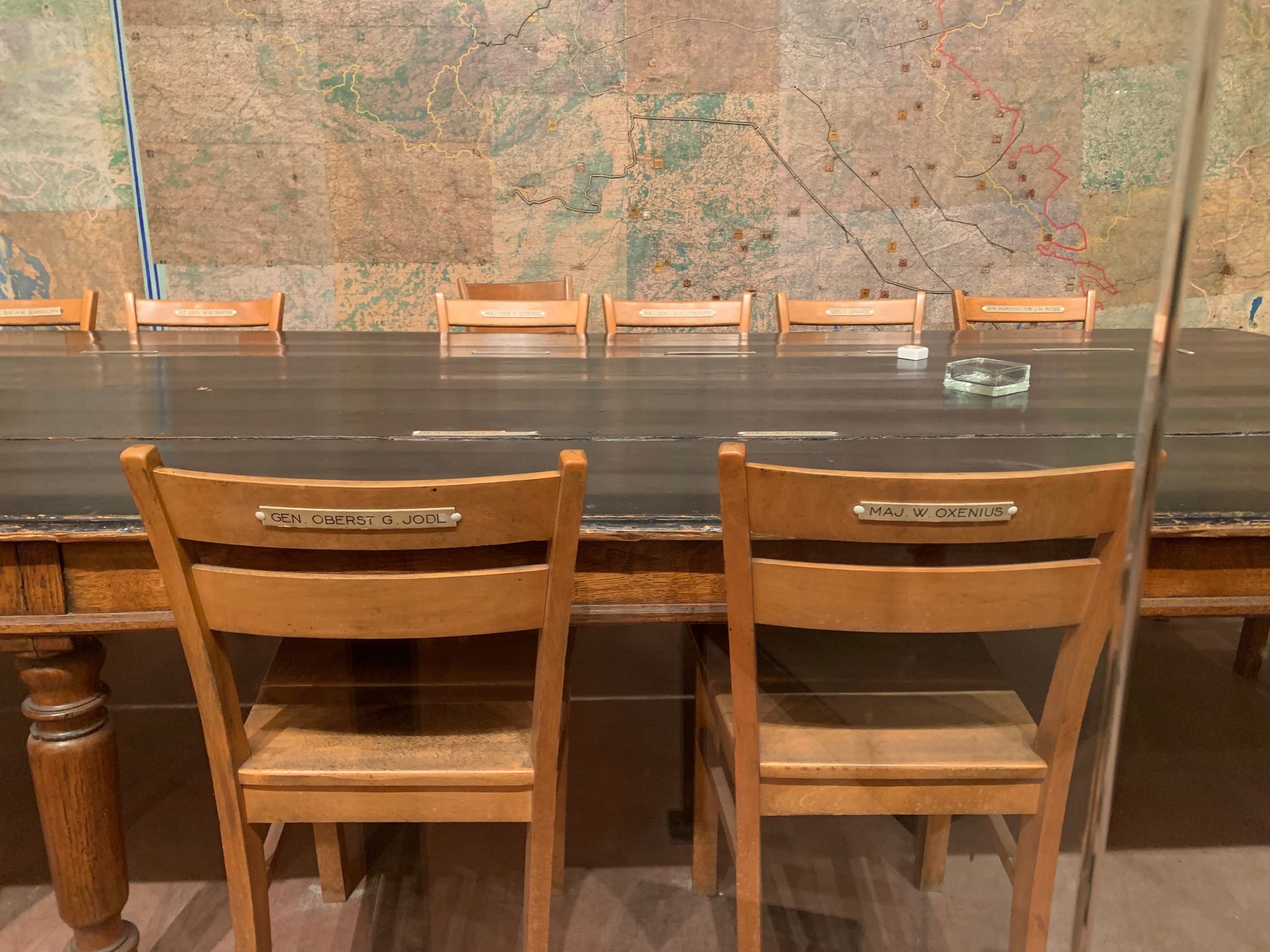 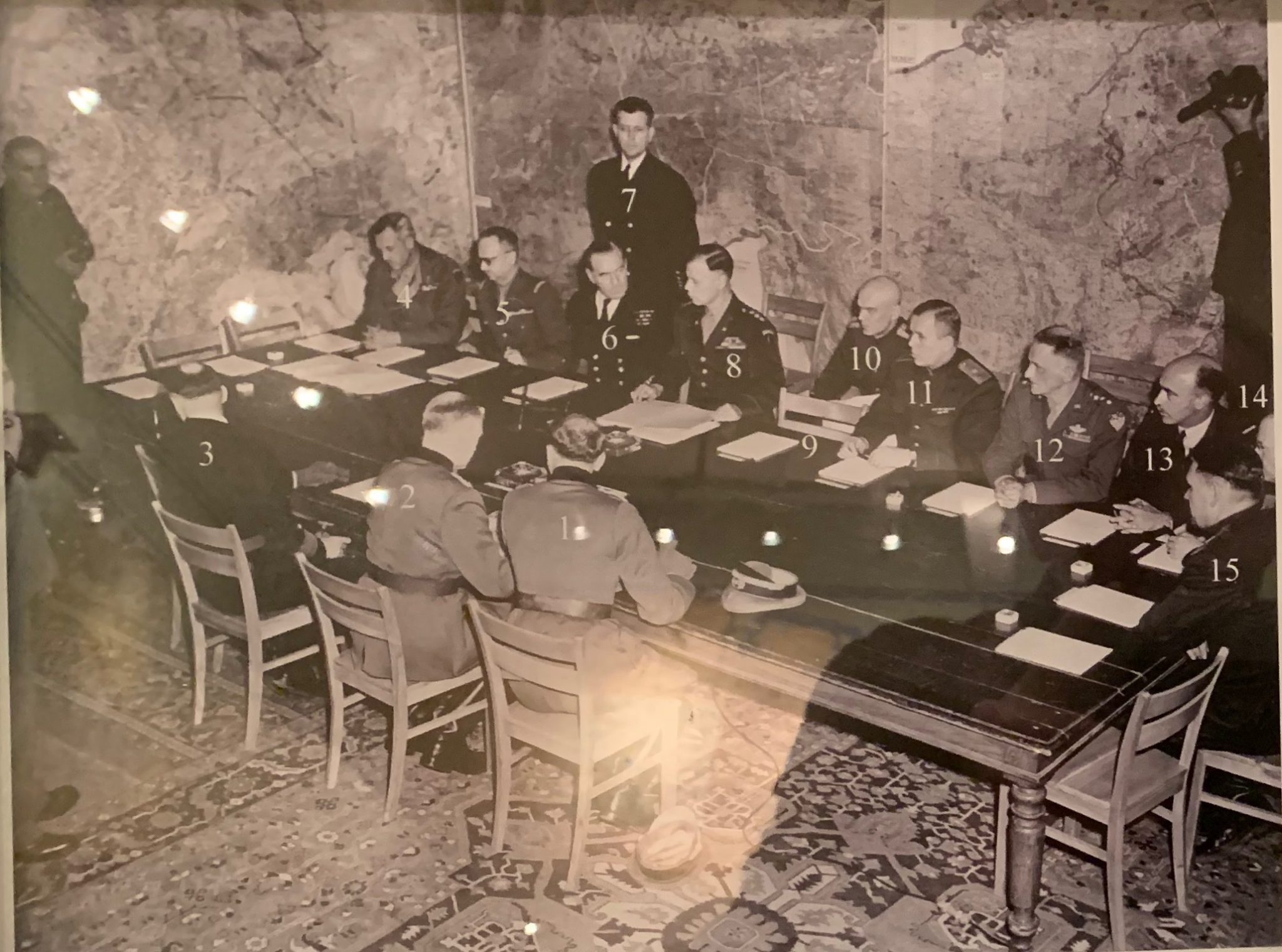 Below is the legend of who is whom. 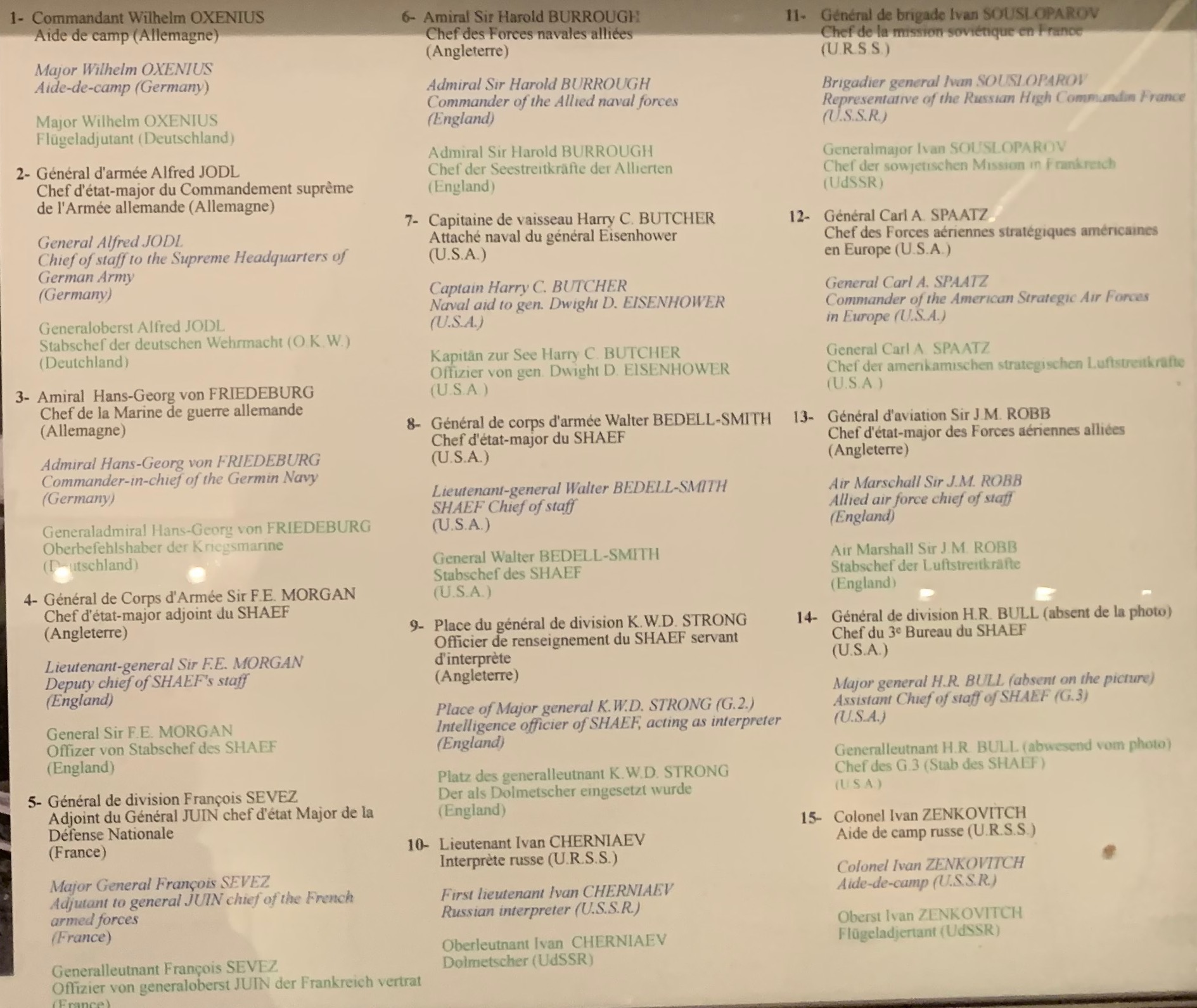 This panorama of the room shows all of the walls covered with maps.

The other exhibits in the Museum of the Surrender include over fifty mannequins in vintage uniforms of the time period of the surrender. There are also plaques and articles about Reims and those stationed there. There is one main room at the top of the stairs before the Surrender’s Room. The mannequins below are posed in front of a painting of the surrender. 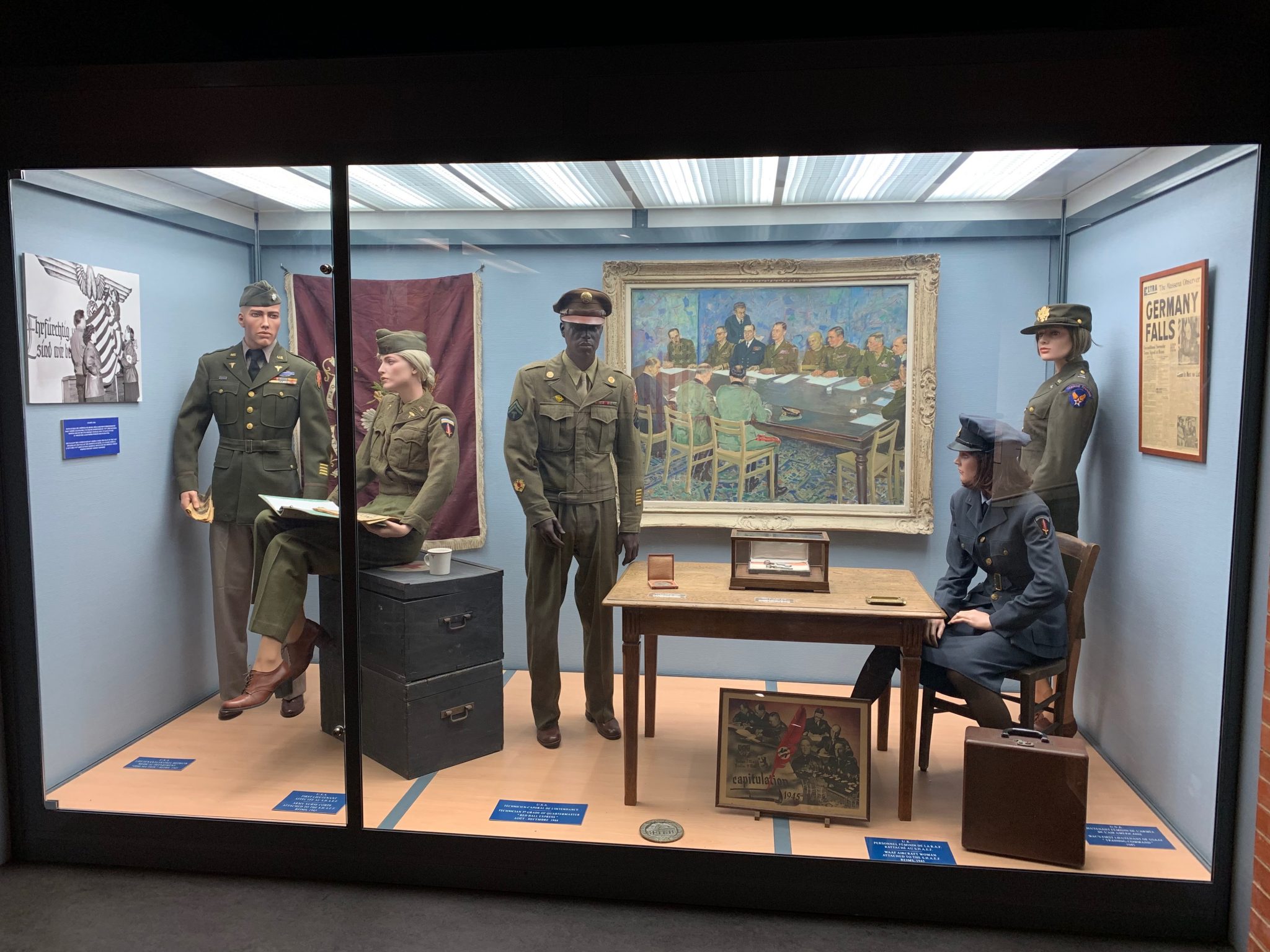 The 101st Airborne also had its staff headquarters here at Reims during this timeframe. One of the plaques in the display case below mentions that the 101st response to the Battle of the Bulge was launched from Reims. 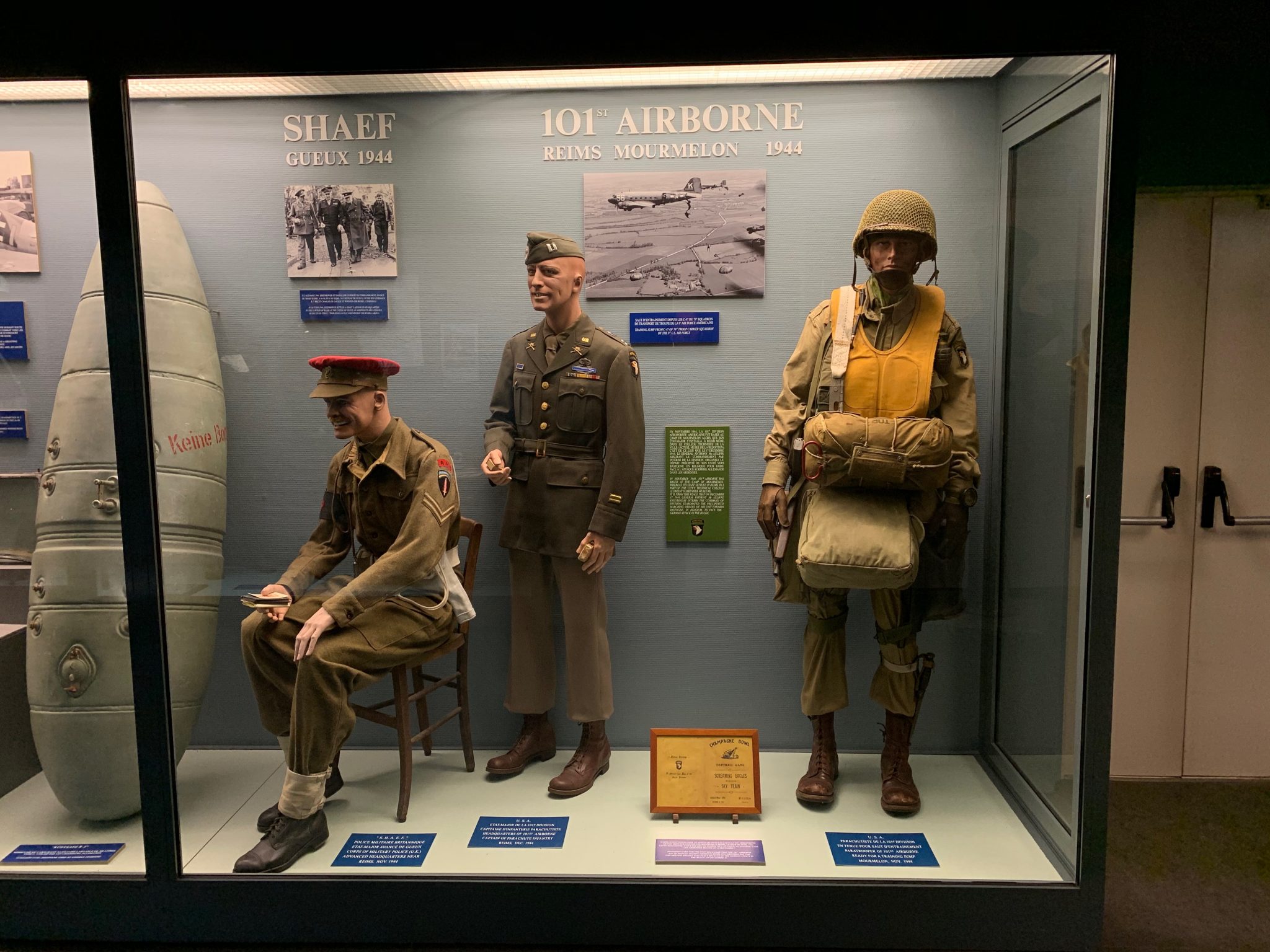 They have weapons and equipment on display, such as the Norden Bombsight below. 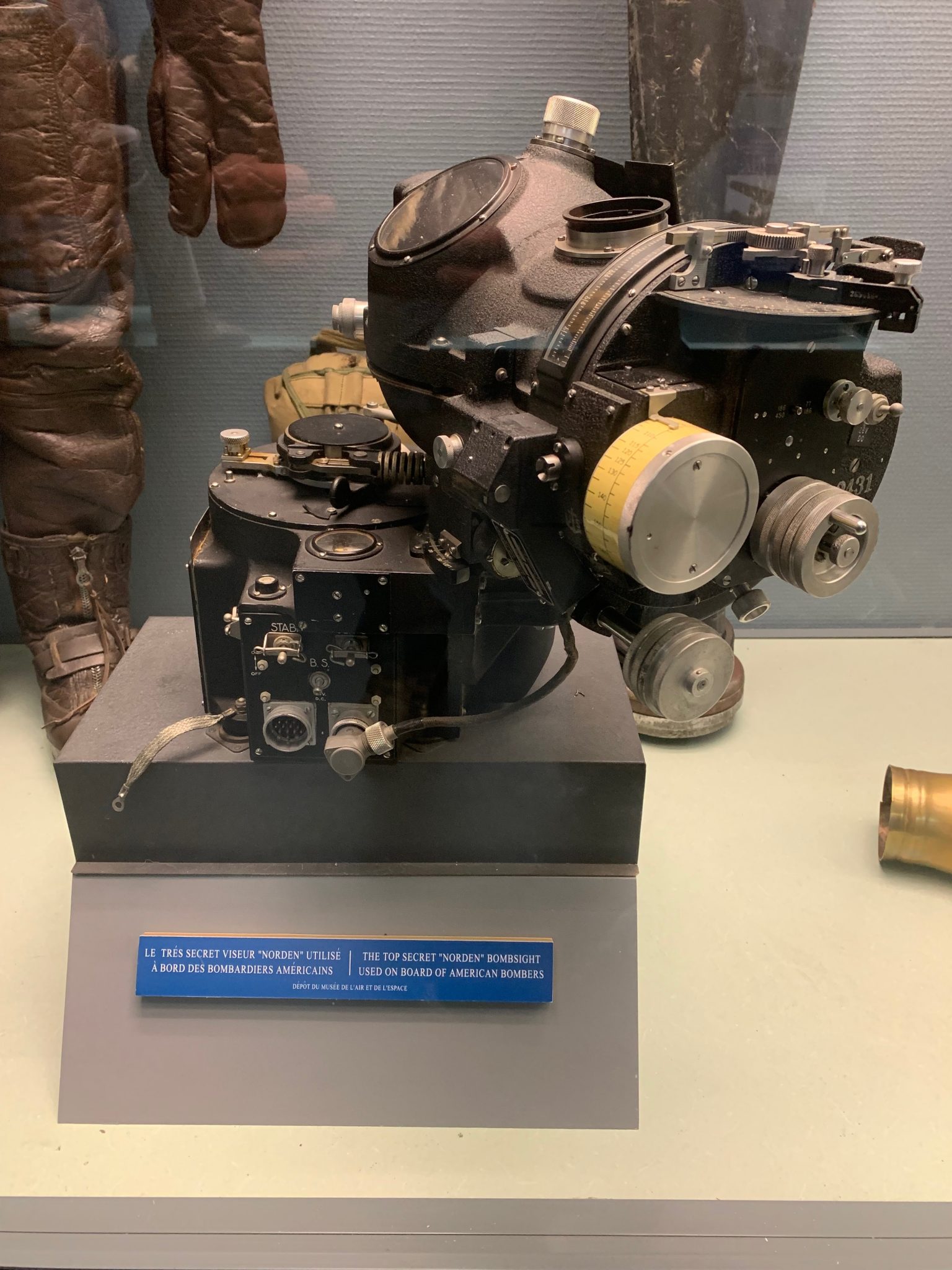 To the right from the Surrender’s Room there is another exhibition of uniformed mannequins. 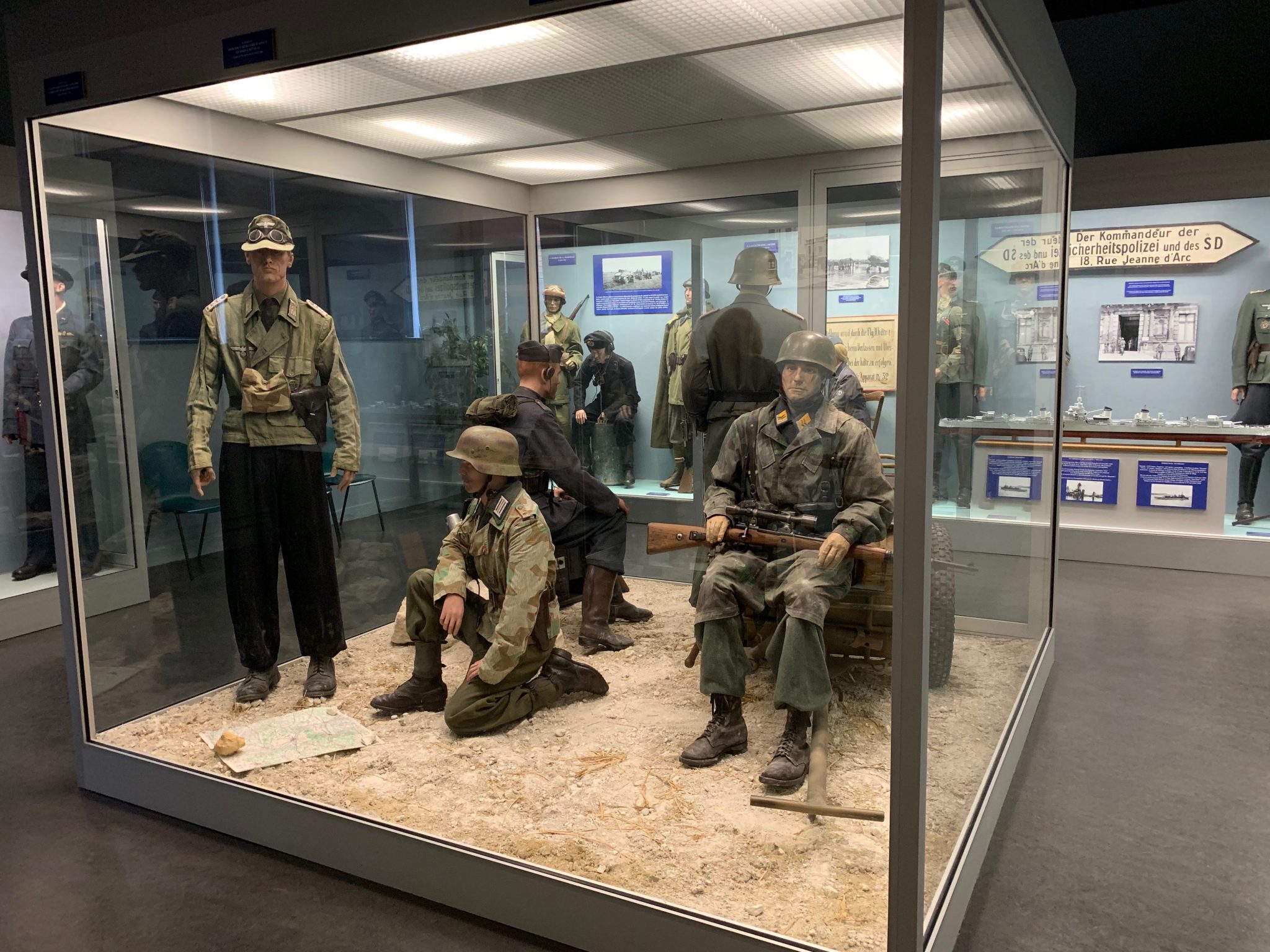 Below is a gallery of some of the other plaques and exhibits in the Museum of the Surrender. Hover the mouse over each one to see the caption, or click on the image to see a larger version. 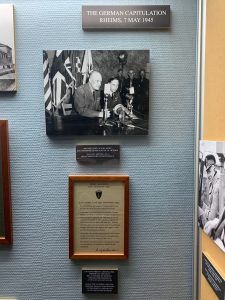 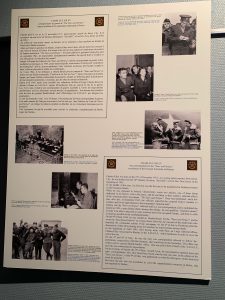 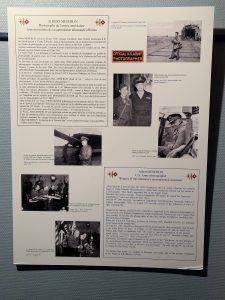 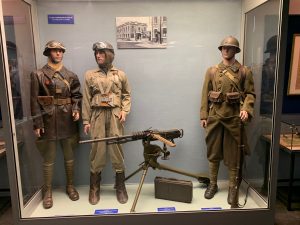 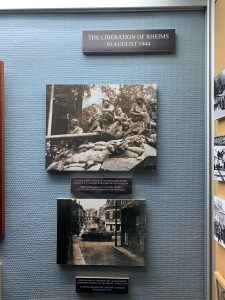 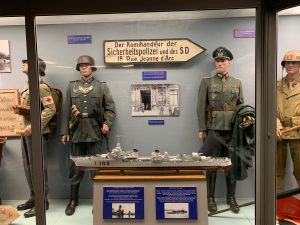 The map below shows how to walk to this museum from the train station in Reims. 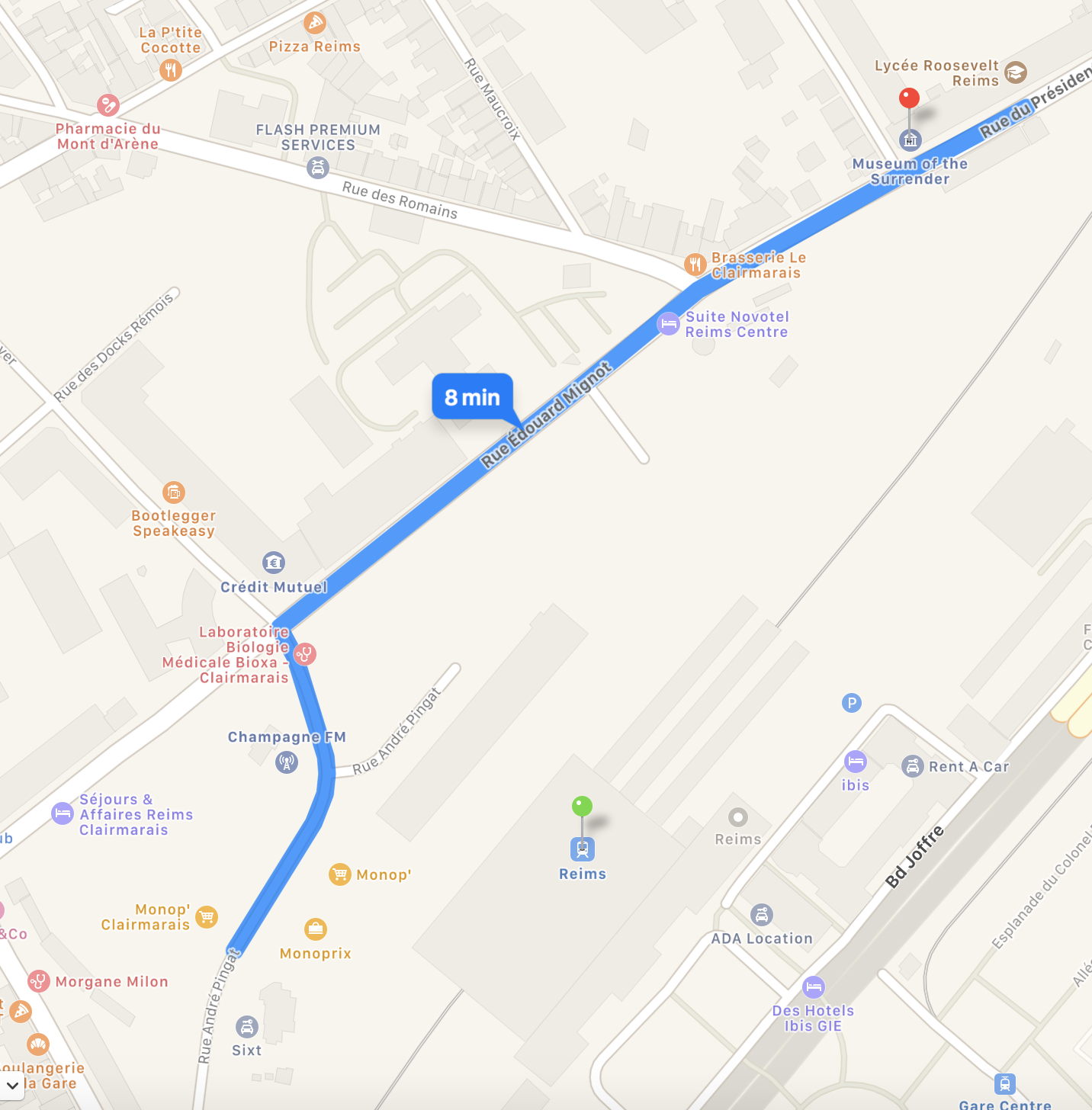