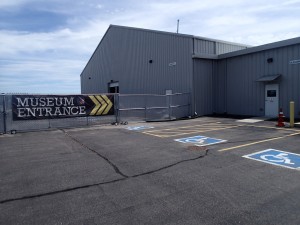 That statement alone should get WWII and airplane buffs alike to storm the place. But it is currently small and unpretentious, and a bit hard to find. The Museum sits at the end of a block of warehouses, which in turn are at the end of a dead-end road near the Colorado Springs Airport and Peterson Air Force Base.

The museum is only open Tuesdays, Thursdays and Saturdays, and has docent-led tours at 10am, noon and 2pm.

This place is worth finding, and worth the time. We’ve been to most if not all of the World War II museums: the National World War II Museum in New Orleans; the Pacific War Museum in Fredericksburg, Texas; and, of course, the U.S.S. Arizona and the Pacific Aviation Museum at Pearl Harbor. All have their strengths, and, as expected, this one in Colorado Springs strength lies with its airplanes.

We had driven down from Denver to stay the night for the Barr Trail Mountain Race, and arrived at the museum almost an hour early for our 2pm docent-led tour. When they told us that the tours ran two hours long, I got excited and my wife restrained herself from slapping me. But our docent, named Phil, not only toured us around but told story after story that kept us interested, entertained and amused.

The current museum consists of three parts: a set of display cases with memorabilia, mainly from local World War II survivors and/or their families; a connected hanger and work area, which houses six or so planes with more display cases; and the adjacent hanger of WestPac Restorations, which has several planes that are either fully restored or are in the process of being restored.

The tour starts in a lecture room, where docent Phil shows a map of the European air theater, describing it as a 1,500 x 1,500 square mile area. He later shows a map of the Pacific air theater, where the same 1,500 x 1,500 square mile area would fit between Midway and Oahu – a small portion of the entire area of the Pacific that saw action.

The rows of display cases told the story of World War II. This was not the in-depth, blow-by-blow story that is shown at the Pacific War Museum, but a summary with stories of local servicemen and some excellent items. There is a signed first edition of “Baa Baa Black Sheep” by Pappy Boyington. There is also a Norden Bombsight.

In the case on Pearl Harbor, there is a picture of the U.S.S. Arizona dated December 10, 1941, with the caption “View from ahead, looking aft.” 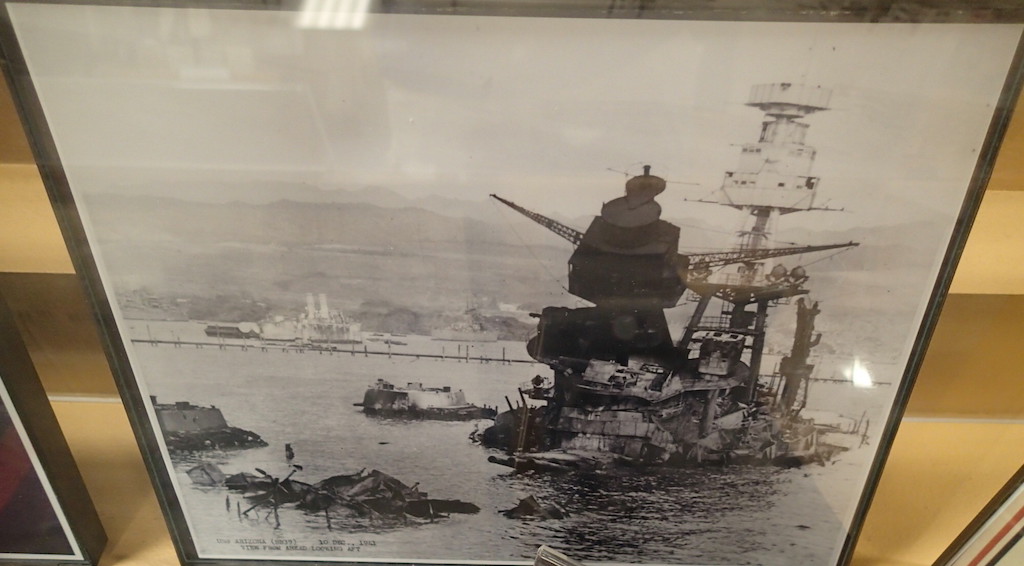 There are also several personal stories. As we passed the display case describing Dolittle’s Raiders, Phil told us a story of a visitor to the museum who was obviously a World War II vet who would not identify himself until after the tour. It was Dick Cole, the co-pilot of Dolittle’s plane on the raid. Mr. Cole is one of four current surviving members of the raid. 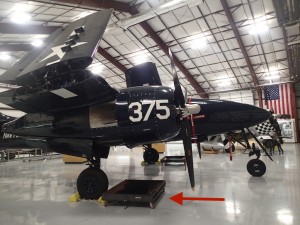 As I mentioned at the very beginning, this museum houses the largest collection of operational World War II aircraft. There was a dead giveaway of this fact in this hanger and in the WestPac Restoration hanger – see the photo to the right. Every plane had an oil pan underneath it to catch leaking oil. Either the engines still leaked oil, or they were going for ultimate realism!

Many of these planes were recovered after being unceremoniously buried in places like Papau New Guinea at the end of the war. With fresh planes available, there was no value seen in keeping these planes, so bulldozers dug trenches and the planes were shoved in. The team at the museum built the business plan for recovery, raised the funds, recovered the aircraft and in most cases restored it to World War II-level operation (or better).

There are about six planes (or pieces of planes) in this hanger, several of the operational. This includes one trainer, the husk of one P-47D-2RE Thunderbolt (which docent Phil said would one day be restored to flying), and several others. 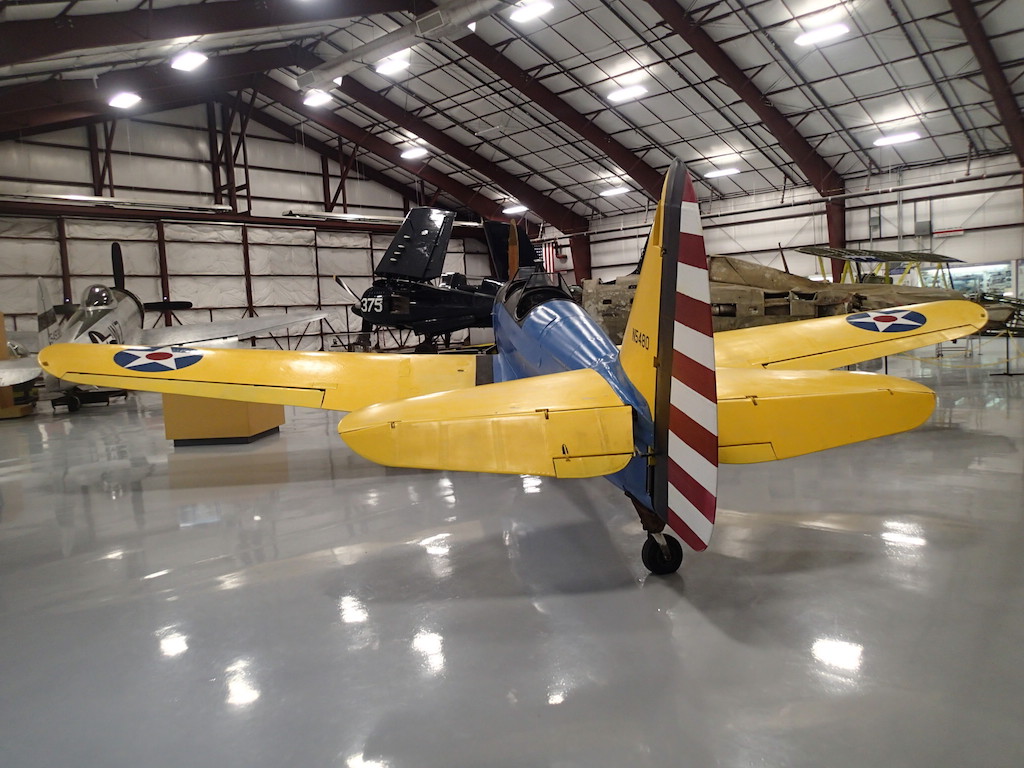 On the way out of this part of the tour, we went through an adjacent workroom and into a small restoration area. There, proudly displayed, was a piece of the U.S.S. Arizona. Docent Phil said that the museum curator had procured it on a trip to Oahu. The display had a map that showed what part of the Arizona the piece was from. All were encouraged to touch it, prompted by Phil’s disclosure that soon it would be in a case under a piece of glass. The U.S.S. Arizona Memorial is one of the most emotional places to visit, and touching a piece of the ship was surreal. 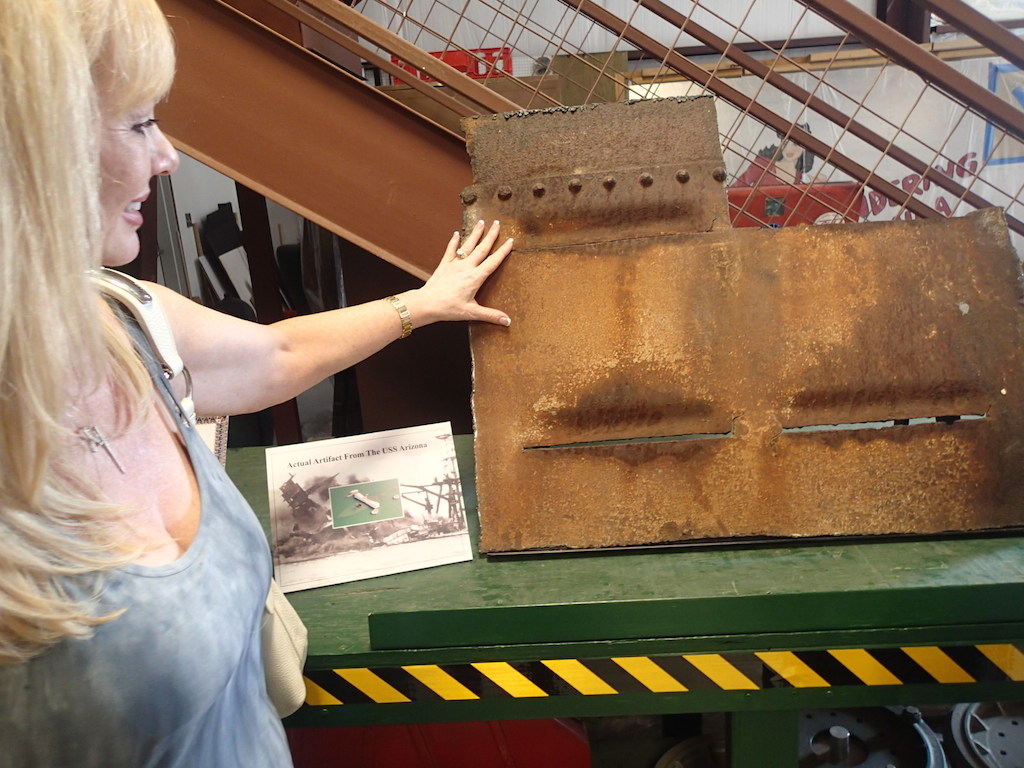 The last major part of the tour is reached by a walk across the tarmac to the hanger of WestPac Restoration. The hanger houses several planes being restored, operational planes (like Audrey’s favorite, the B-25), and several unique workrooms for restoring propellers and bending/curving metal for the plane’s housing. 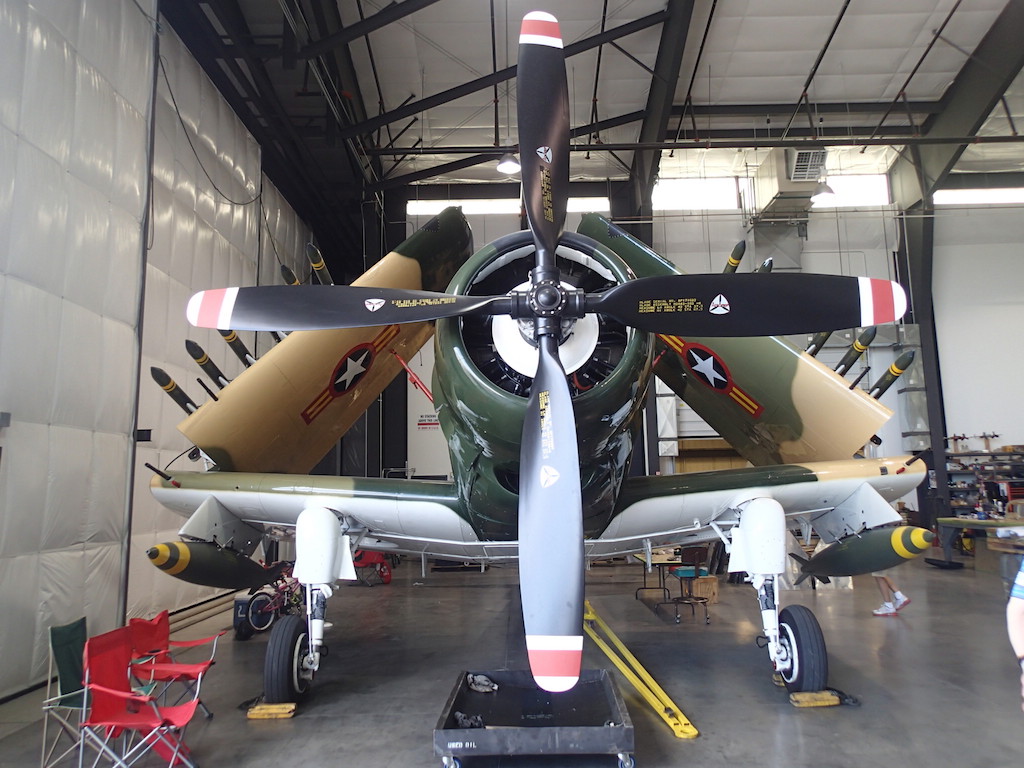 The WestPac hanger has a propeller shop and a metal shop, the purpose of both being described as “since you can’t buy World War II props and curved metal off the shelves, we build them here.” There was a set of very warped propellers off to the side that had been recovered; they were to be put into a machine that would straighten them out, and then into another machine that would put just the right angle of twist on them for the planes they were destined for.

Among the restoration projects were two P-38s, one of which had been recovered from Papau New Guinea. You can see details of their restorations on the WestPac web site – the P-38 “white 33” (as that was the insignia painted on its tail) and the P-38 Lightning.

Audrey’s favorite was the B-25, pictured below. According to the inscription near the tail, this plane had flown off the deck of five aircraft carriers. I’d say that’s the definition of “operational”. 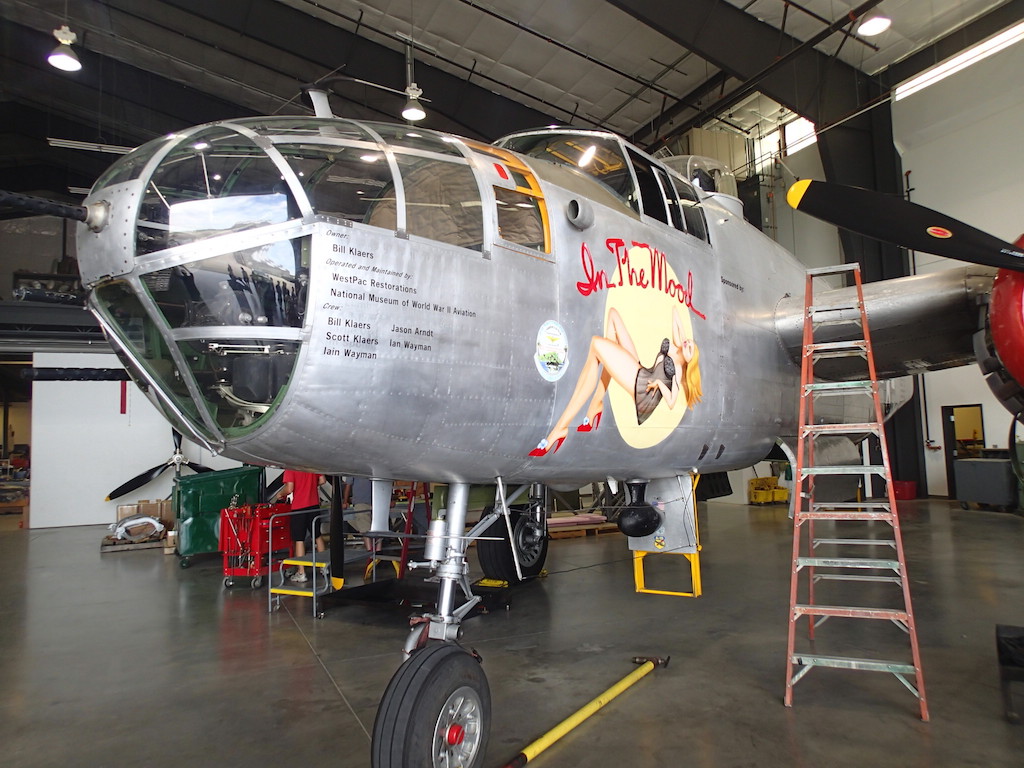 My wife was looking at a picture in front of the B-25 that showed the plane and its owner, Bill Klaers, and said to me “That guy looks like the man in the picture.” Bill was roaming around the WestPac Restorations hanger on the day of our tour, as he probably does most days. We struck up a conversation with him (I believe he was trying to talk my wife into taking a job there) and learned quite a bit more about the museum from him. Many of the plane are taken out and flown quite frequently, including the B-25 (which had a starring role in the movie “Pearl Harbor”).

We didn’t realize it at the time, but Bill is also the co-chairman of the museum and is co-owner of WestPac Restorations.

As befitting its collection of operational vintage aircraft, the museum has big plans. They have quite a few more planes ready to be added to display as soon as they can work through some legalities. And, to house all this, they are planning a huge expansion, with a building that has a replica of an aircraft carrier deck, with plans to mount a plane from the ceiling like it has just taken off from said deck.

Details for the expansion plans can be seen here.

We will certainly be back to see their new facilities when ready.

One of the first items on display

A gunner sat in here

We can rebuild you

In case of capture

Area of the USS Arizona where the fragment came from

What are these doing in an aircraft musem?

In the WestPac Hanger

Propellers to be restored

The National Museum of the Pacific War, Fredericksburg, Texas