The National Museum of the Pacific War, Fredericksburg, Texas

For anyone with interest in history in general and World War II in particular, the National Museum of the Pacific War in Fredericksburg, Texas is a must see. 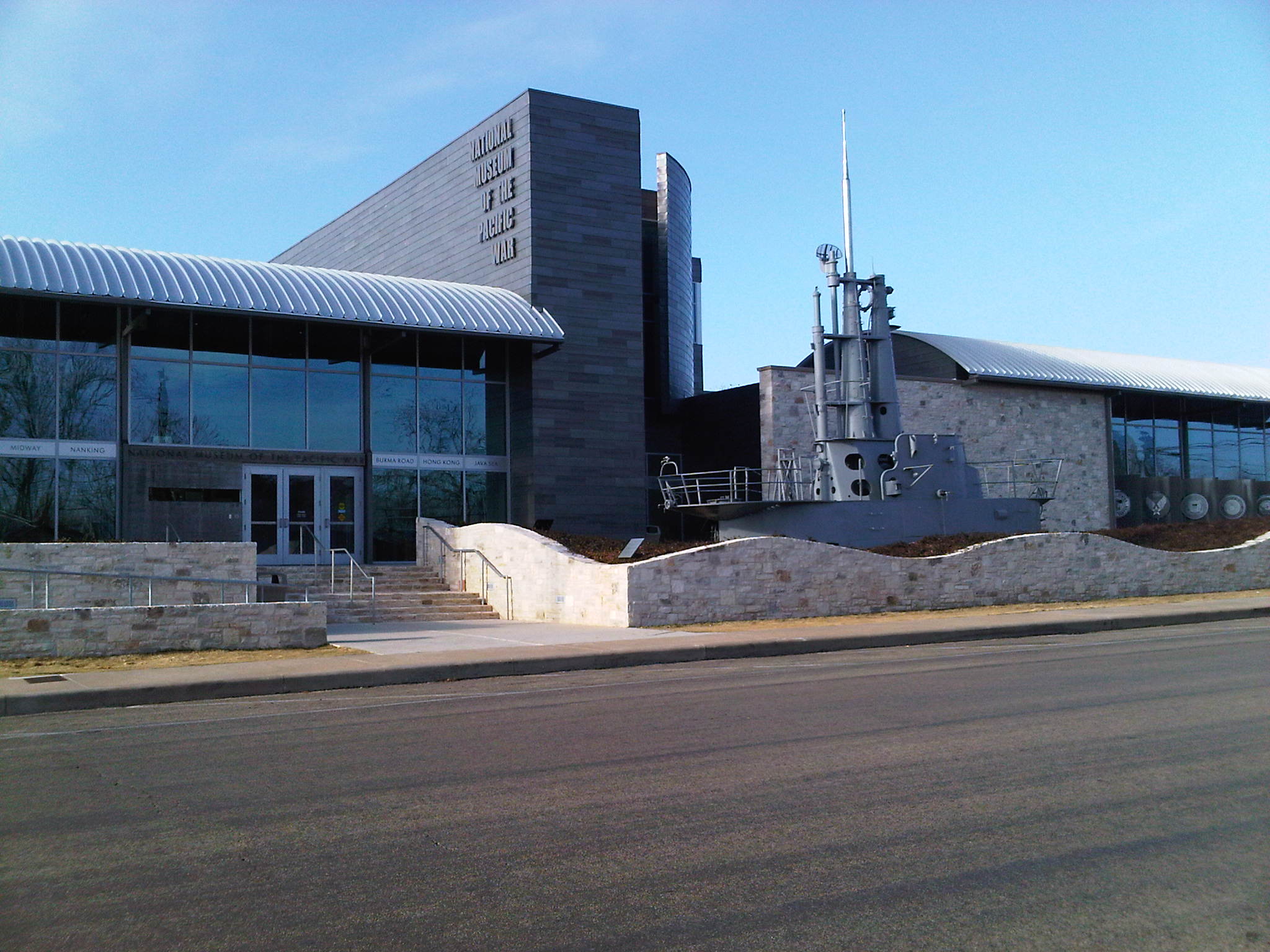 There are three main buildings housing separate exhibits:
– the George H.W. Bush Gallery, which has a chronological exhibit of the war in the Pacific;
– the Pacific Combat Zone, which has the large pieces, including planes, PT boats and artillery;
– the Admiral Nimitz Museum, housing a history of the Nimitz Hotel and a short history of Admiral Nimitz.
There are also other areas, including the Plaza of the Presidents (featuring the ten Presidents who served in WWII), the Memorial Courtyard and the Japanese Garden of Peace. The staff recommends a day and a half to see everything; we (my son, my step-father who is a WWII Vet (and thus got in free!) and I) spent most of a full day. Details below and more photos below.

The George H.W. Bush Gallery houses a 36 section chronological exhibit featuring artifacts, written displays, veteran audio and video recordings, working maps and, of course, planes, tanks and artillery. The tour starts with the “Seeds to Conflict”, recounting the Depression and its impact on the world, how the Japanese felt slighted by the US, the downfall of China and Japan’s subsequent invasion, and other impetuses. Each section features a battle or significant event in the Pacific theater of the war, with artifacts, pictures, videos and other pieces. The sections “Seeds of Conflict”, “Midway”, “Guadalcanal”, “New Guinea”, “Iwo Jima” (well describing the need for the island (fighters needed it to escort bombers to Tokyo) and the reason for the huge American losses (different Japanese tactic) were personal favorites. It is a very immersive museum, forecast at 2-6 hours (we took 3). I’d like to see a tour like this on the European theater, perhaps at the National WWII Museum in New Orleans.

One of the Japanese mini-subs that snuck up on Pearl Harbor is on display, as is a replica Doolittle Plane. 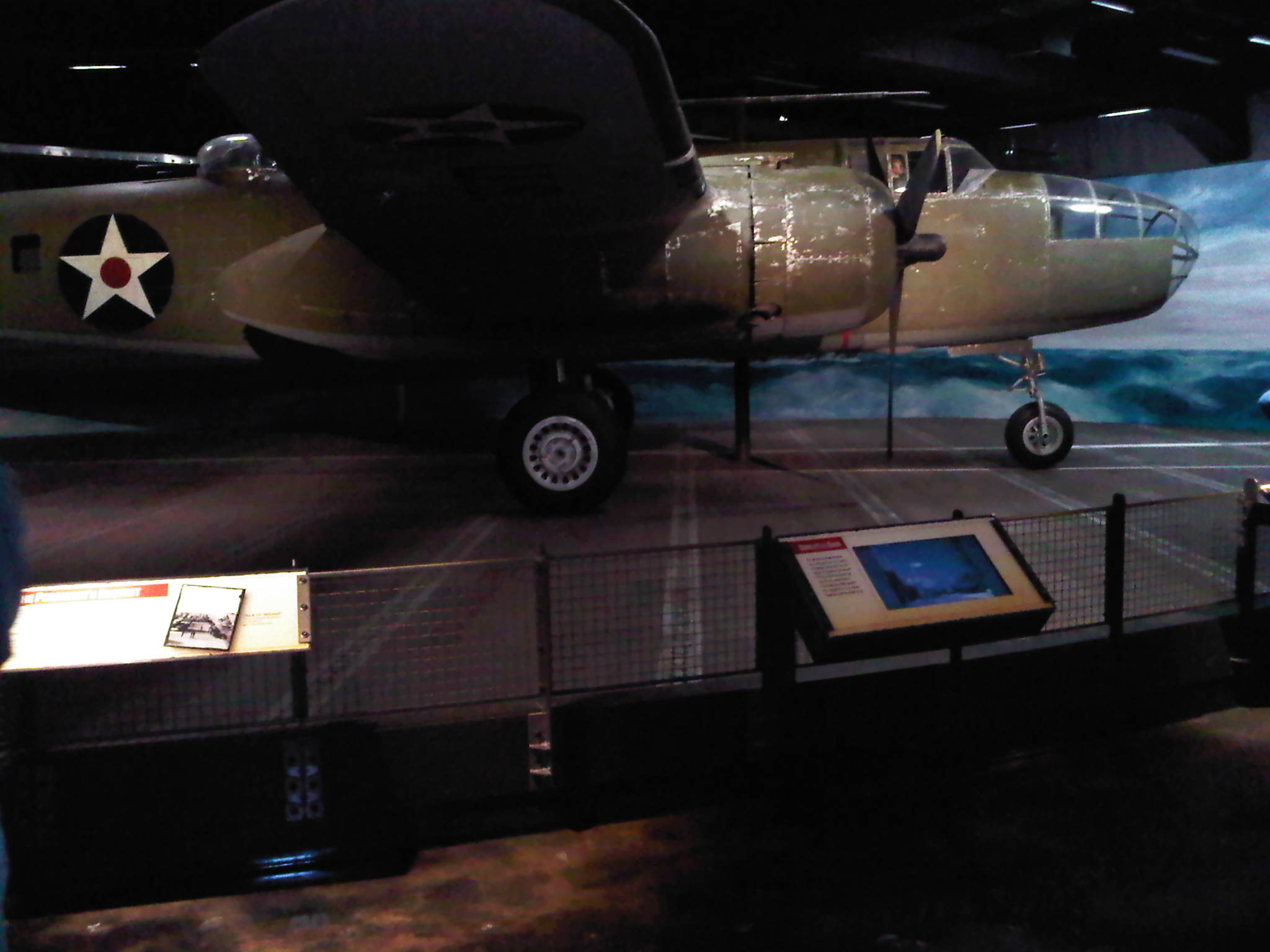 The tour contained a small but interesting exhibit on the USS Houston, sunk in the Battle of Sunda Strait in February, 1942. 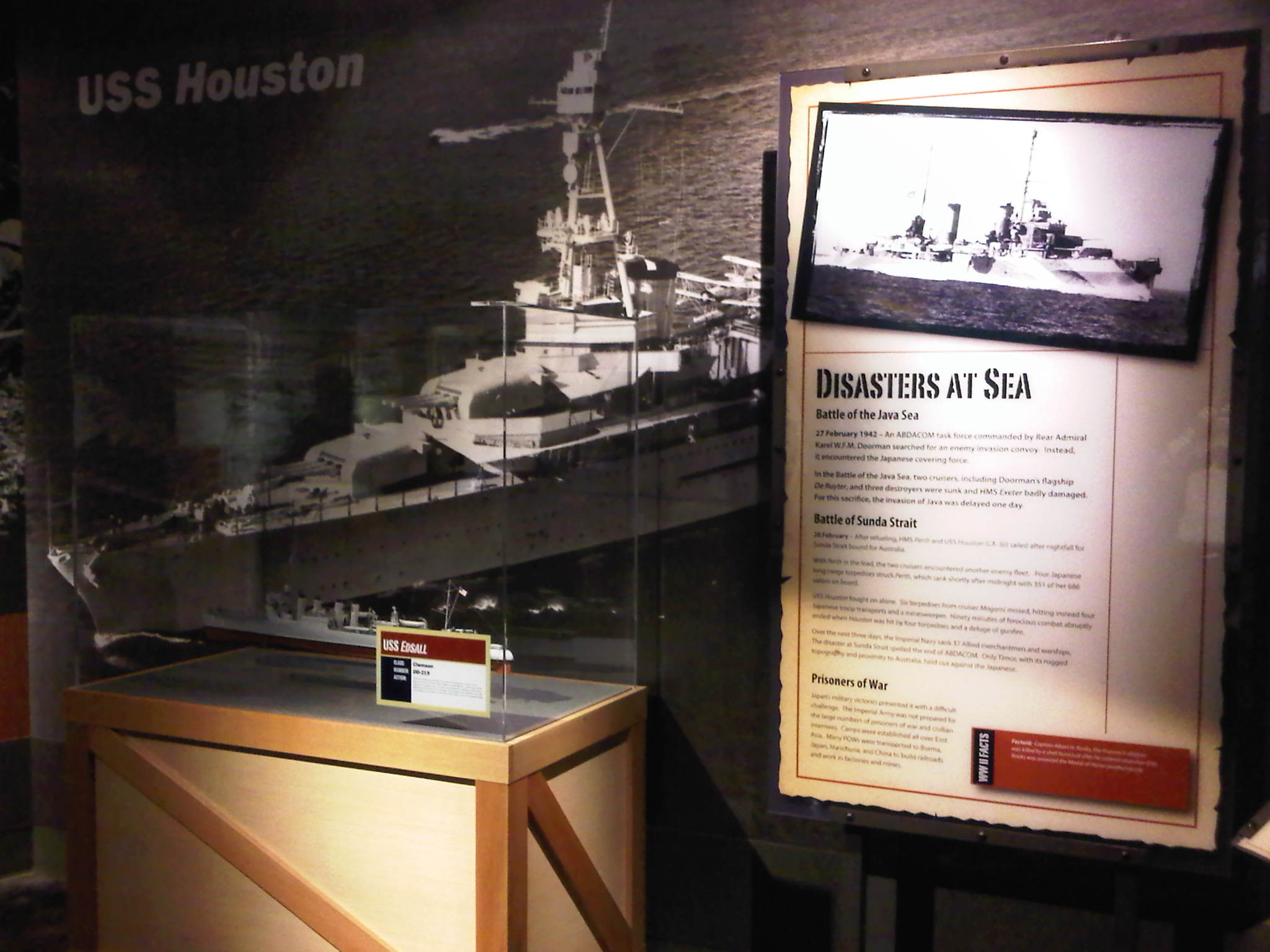 One of the most interesting and gut wrenching displays was the combination of a tank with an artillery hole in the front and a video of the tank commander, Sgt. Jack Lattimore, 7th Australian. During the attach on New Guinea, his tank was hit (see the hole; either this was the original, or a very close facsimile), Lattimore’s legs were injured. The driver was killed by the initial shell, and Lattimore, his gunner and the wireless operator were injured. He got them all out of the hole while the tank was burning, then pulled himself out with his hands (he lost one leg in the subsequent medical operation). A powerful combination of a display. 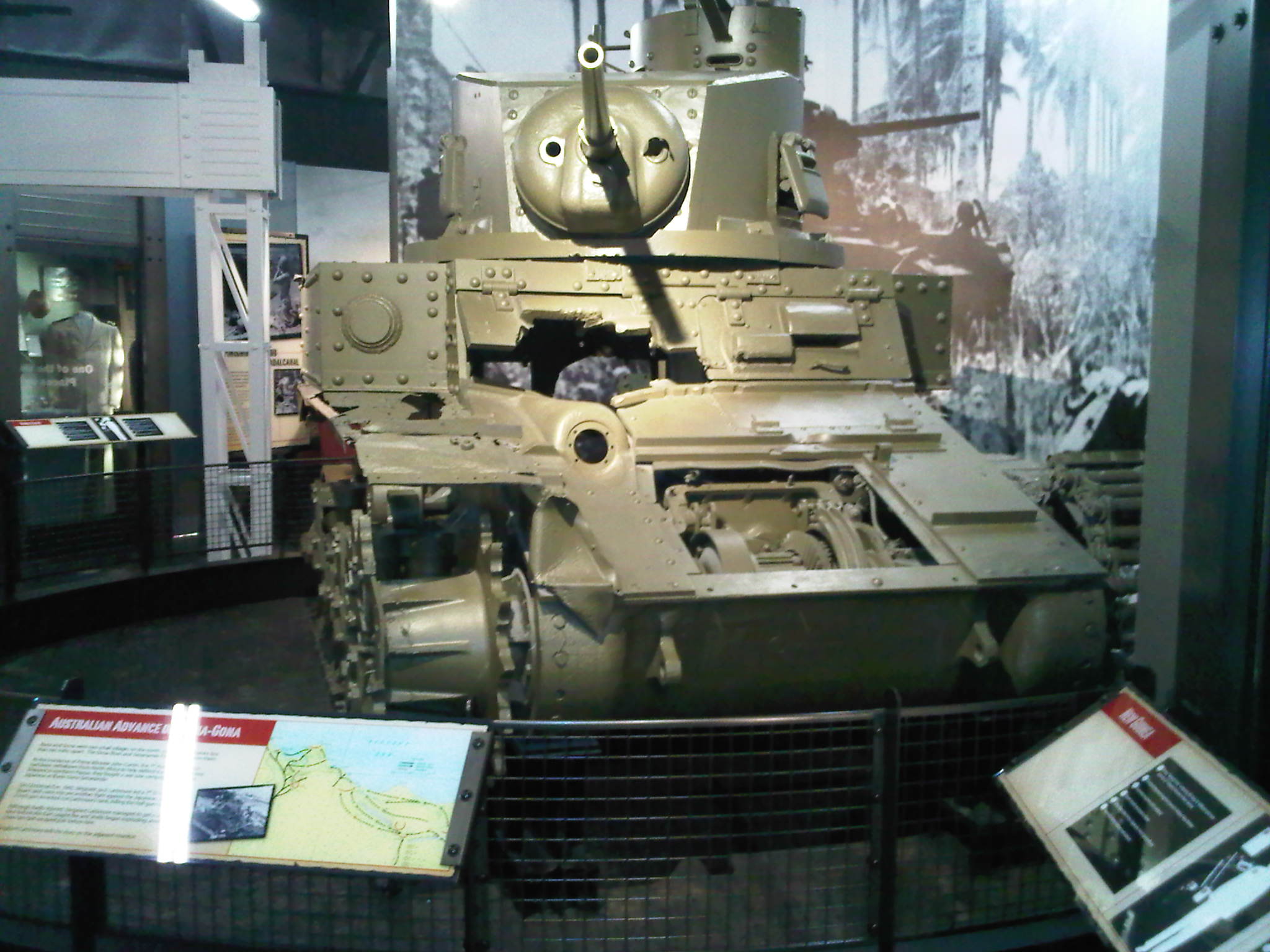 There was a good video on Torpedo Squadron 8, the first American dive bombers who occupied the Japanese forces, and lost all hands except Ensign George H. Gay (a good article on the squadron from the USS Hornet here.) The video also says there were two other “sole survivors” from the squadron launched at the same time from Midway. While these two squadrons had terrible losses and did not sink any targets, they “allowed that the next flight of bombers to fly in relatively unimpeded and score direct hits on every one of their targets, including the Japanese carriers Akagi, Kaga, and Soryu“.

The Pacific Combat Zone is where the “big stuff” is on display. These are guided tours only, leaving on the hour from 10 until 4.

In the first hanger is a replica TBM Avenger like the one President George H.W. Bush was piloting when he was shot down in WWII. His other two crewmen were lost (one bailed out, but his chute did not open). Our tour guide explained how difficult and scary bailing out was (remove hood, climb out on wing, jump and hope your chute was packed right). 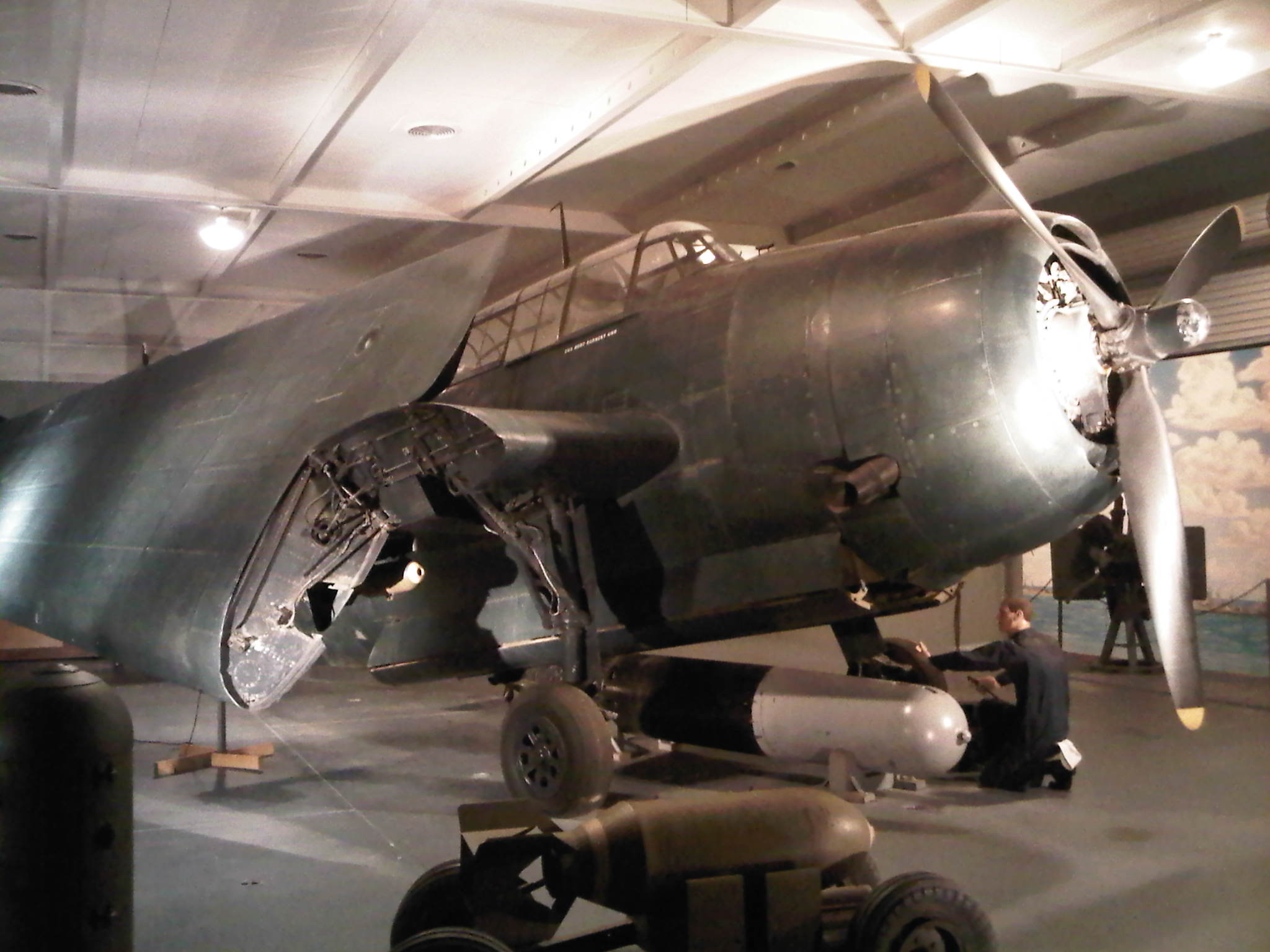 In the second hanger is PT 309. We were told that most of the PT boats were destroyed, or sold for parts, but that this one was found by a museum employee on a fishing trip in Boston. The museum acquired it, sailed it to Galveston, where it accidentally sank because of hatch left open. Upon retrieving it from the bottom, there was a 17 foot shark inside; the guide wasn’t told how they got the shark out. 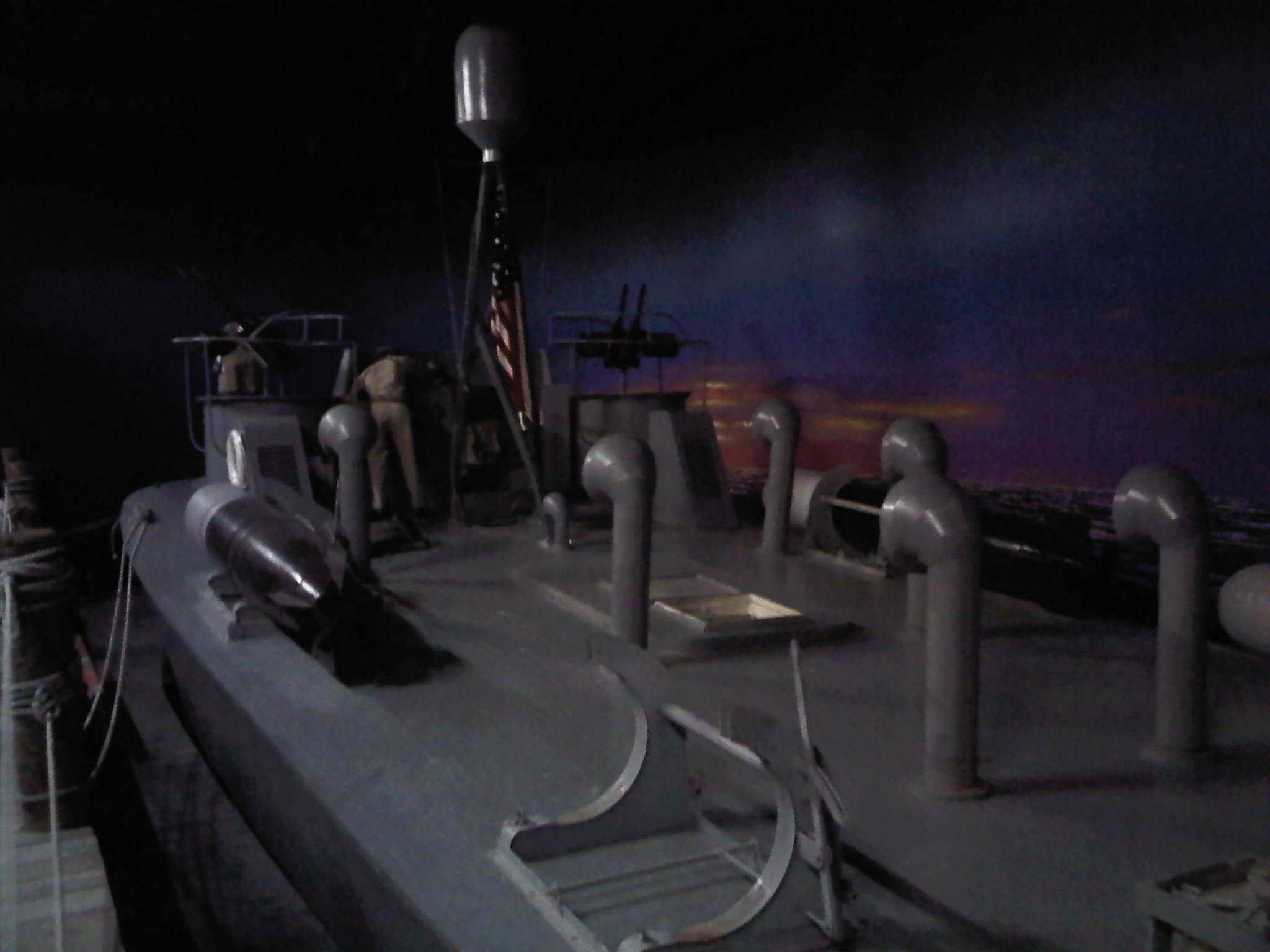 We were told the boat was nicknamed “Little Frankie” as the crewmen partied with Sinatra in NYC and he met them the next morning with a bottle of champagne for a send off. His and the crews signatures are supposed to be in a plaque inside. 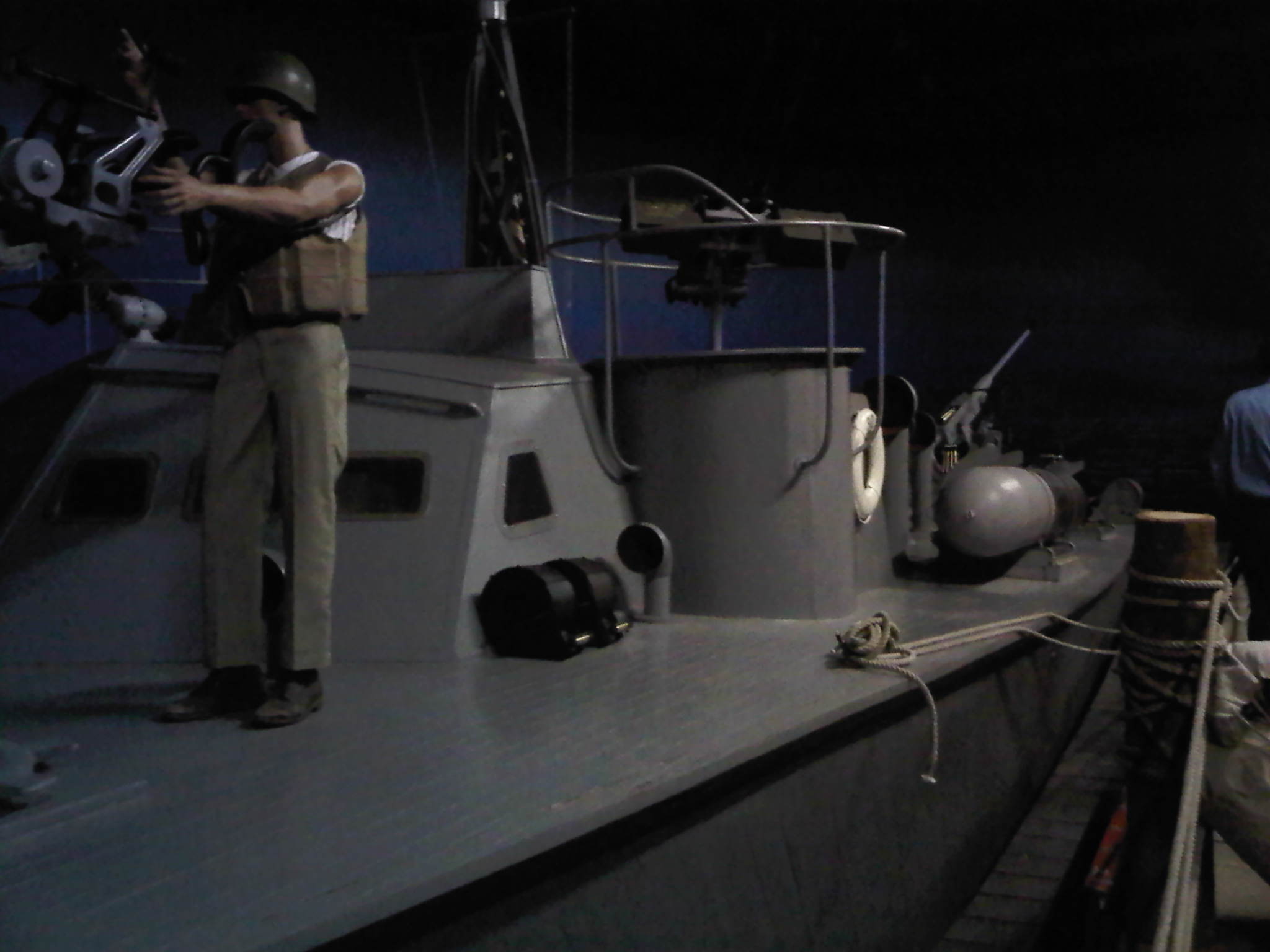 Outside of the hangers is the beach invasion reenactment area, which is built up with bunkers, artillery, dug in tanks and other obstacles. 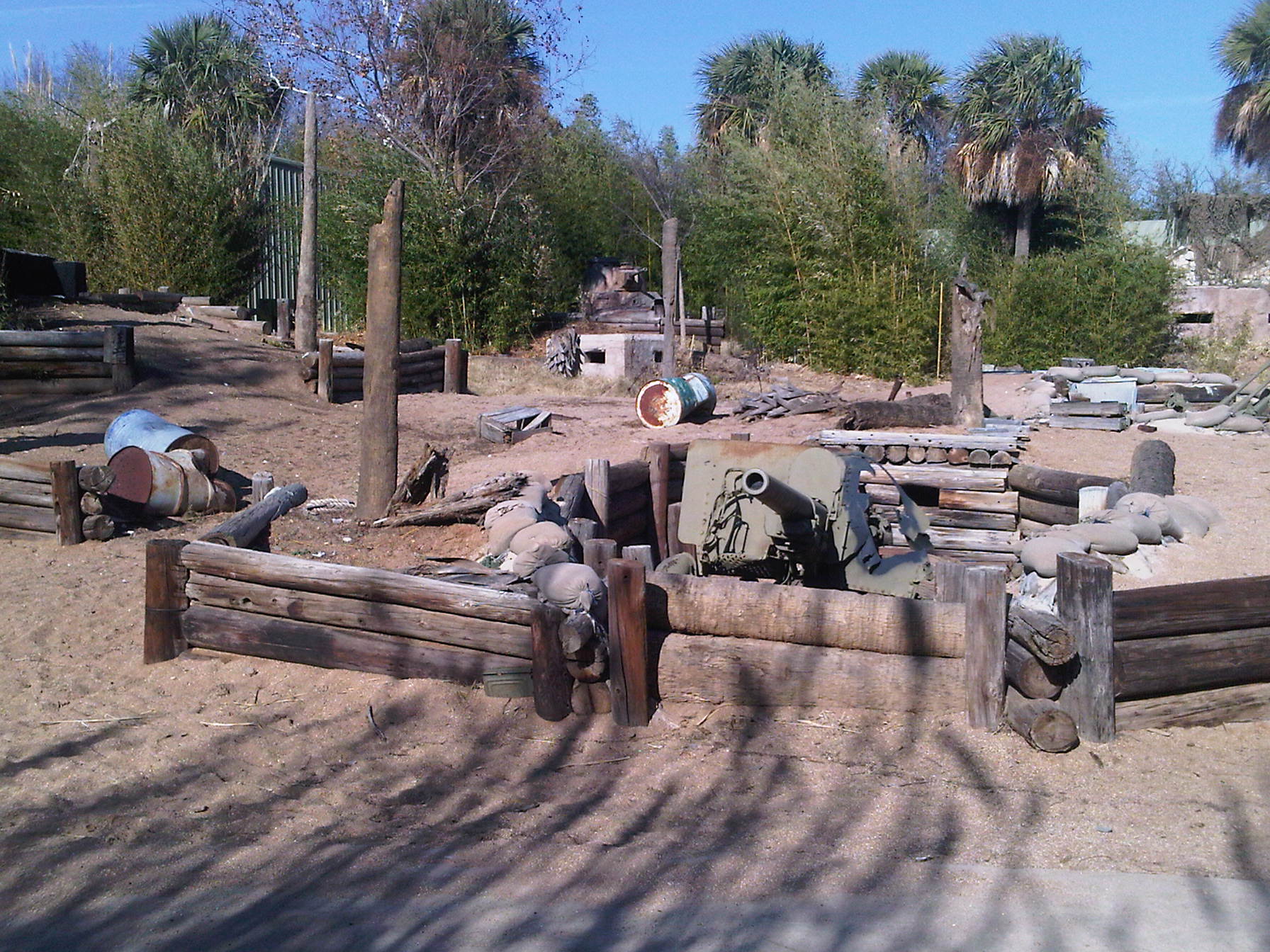 There are also landing carriers and a “Duck” on display (in the picture below, my son is not the “Duck”, he is on the lander!). 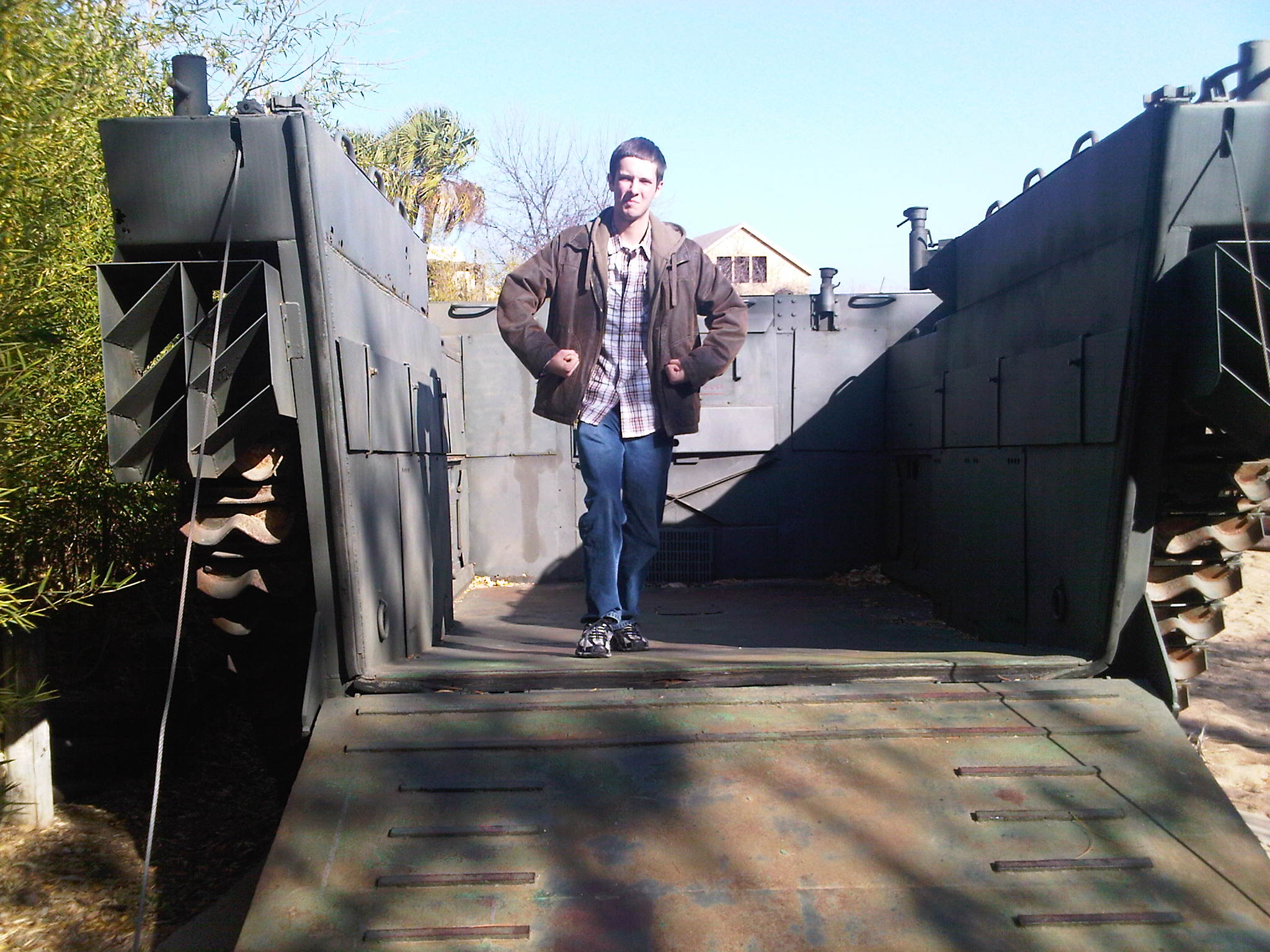