This is the 14th story in Street and Smith’s original publishing order. 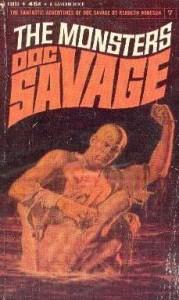 When you have 180+ stories, there are going to be some lemons, and this was certainly one.  The story starts out promising, with the murder of a man in Trapper Lake, Michigan, his only acquaintance killed while seeking out Doc to help figure out what happened to the first. The trail leads to a compound outside of NYC owned by Griswold Rock surrounded by a high wall and covered by electrical lines to keep something in. Griswold Rock had apparently been held captive, his funds from owning a railroad centered in Trapper Lake being used to fund some type of experiment. Flyers that have been sent to every major newspaper in the country stating that “The Monsters are Coming” are a clue that Doc links to the compound.  All of the activity centers around Trapper Lake, so the crew heads there, and soon sees the Monsters, men who are now several times their normal size. The man controlling the Monsters sends them into the not-so-thriving metropolis of Trapper Lake causing destruction and lots of press coverage. Threats are then sent to major cities that the Monsters will be sent their way if they do not cough up some cash. Doc and his men track down the Monsters and their leader, solving the mystery and ending the threat.

No exotic location, no earth-shattering invention or feat. Hoping the next one gets back up the the high level of the previous ones.