This is the fourth story originally published by 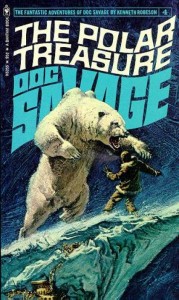 Lester Dent portrays a perplexed Doc Savage, unlike the other novels. Doc is several times surprised by events, which happens rarely.

In this novel, Victor Vail, a blind violin maestro, is saved from kidnapping by Doc (who incidentally wrote the piece Vail had just been performing). Years ago, Vail had been aboard an ocean liner that had been marooned in the Arctic Ice, losing his wife and daughter. Vail believes a man named Ben O’Gard, a member of the crew, saved him from Keelhaul de Rosa,  who apparently killed the rest of the passengers, looking for gold and diamonds on board.

Doc discovers that a map was tattooed on blind Victor Vail’s back, which shows where the marooned ocean liner is, containing the treasure. Doc and the team go after the treasure, intent on beating Keelhaul to it. They enlist an arctic submarine, whose captain is eventually revealed to be Ben O’Gard (who, as a big man, has some good fights with Renny and Monk). O’Gard is also after the treasure, and as they get to the ocean liner, a fight ensues between Keelhaul (who has enlisted Eskimos to help), O’Gard and Doc and team. Surprisingly, Victor Vail’s wife and daughter are alive, being helped by the Eskimos, and Victor (who I had pegged wrongly at the beginning as the probably bad guy) shows up, sight renewed by Doc’s operation, to be reunited and to assist Doc and the gang win the day and get the loot.