This is the fifth story originally published by 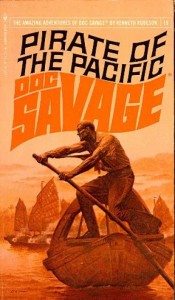 Street and Smith. If I remember correctly, this is one of the first ones I purchased back in the late 60s or early 70s. My copy has my name scrawled in it, and the stamp of a Houston book shop on Long Point that is no longer there.

Pirate of the Pacific has, thus far in my re-read, the best “made for movie” plot and action. From the submarine arrival to NYC, on a liner across the Pacific to speed boats, shark battles and machine gun fights, a lot is packed into this short 136 page book.

The story picks up from where the previous story, The Polar Treasure, leaves off, as Doc and his team are returning from the Arctic in a submarine. They are attacked by enemies who have intercepted a request for help to Doc from Juan Mindoro, a politician from the Luzon Union. Avoiding the attacks, Doc rescues his men (who get pinched) and Juan from the men of Tom Too, a man who aims to take over the Luzon Union. Three of Doc’s men get kidnapped (right after he rescues Renny), and Doc follows them on an ocean liner (in interesting disguises) bound for the Luzon Union. They are found out, attacked and imprisoned on the boat. They escape (through a bomb hole with some nifty diving equipment), get to the islands, and end up island hopping, fighting Tom Too’s men, rescuing each other, avoiding sharks and trying to track down Tom Too.

A good passage is included in this story as to why Doc never uses guns (though in some stories he does):

“The reasons I don’t use a gun are largely psychological,” he said. “Put a gun in a man’s hand and he will use it. Let him carry one and he comes to depend on it. Take it away from him, and he is lost – seized with a feeling of helplessness. Therefore, since I carry no firearms, none can be taken from me to leave the resultant feeling of helplessness.”