book notes: Even If It Kills Me by Donivan Blair 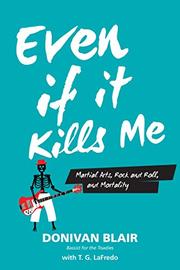 When offered for review Even If It Kills Me, a non-fiction book about a 40ish rock and roll bass player who decides to pursue a martial arts black belt, the only correct response is “hell yeah!”

Donivan (Doni) Blair is the bass player in question, playing for The Toadies as of the writing of his book. He decides to pursue a life-long goal of earning a martial arts black belt starting at the age of 40, and chronicles his progress from white belt to black in a series of vignettes that are not only insightful and entertaining but touch pretty close to home for me.

When my son was nine he decide he wanted to do Karate. We picked a studio that taught Soo Bahk Do Moo Duk Kwan, as it was close and the instructor had a good reputation.  As he was entering into the dojo for the first time, he turned to me and said “You’re going to do this with me, aren’t you Dad?” I had not intended to. but how could I resist? I was 37 or 38, so a bit younger than Doni. Four or five years later, Josh had his black belt and I had my 2nd degree black belt.

Doni’s journey, at age 40, takes him three years from white belt to black in Taekwando, training with a grandmaster who was head of the Texas branch of the World Taekwando Federation. His training takes place in lovely Amarillo, Texas where he and his wife had relocated to from Denton (north of Dallas).

Forms are my favorite part of the night. They allow me to take my time, focus and concentrate on each step. The goal is perfection and ti’s easy to see the parallel with technical exercises on a musical instrument. You play scales, arpeggios and études over and over again. It’s not a race, just as taegeuk practice is not a death match. Both are meditative. Both train your body to get the details right.
Those notes are the building blocks of a song. Those steps are the building blocks of a taegeuk. Done correctly, it is a thing of beauty, an outlet for an accomplished martial artist to convey power, strength, speed and confidence.

Doni’s description of martial arts books (I’d like to compare libraries with him) and martial arts movies (another shared pleasure of my son and I) prompts me to go dust of some of both that I haven’t visited in a while.

There’s just a bit of rock and roll notes in here, some good pieces about how after a while life on the road just doesn’t seem worth it when you have a life you want to live back home (business travel is the same whether it is software or music). And LARGE kudos to Donivan for his description of that legend of bass players, Geddy Lee of Rush:

Practice became my religion – and my religion was badass. The apostles were Geezer Butler of Black Sabbath, Jaco Pastorius, and Geddy Lee of Rush. Our hymns included “Electric Funeral,”, “Continuum,” and “Working Man.”
I can’t even tell you all the hours I spent analyzing Geddy’s playing. “Lead bass” sounded like a bad idea, but in his hands, it’s brilliant. He weaves melodically through the song and still stays right in Neil Peart’s pocket. It’s mind blowing, like a rocket ride to Cygnus X-1.
Listen to the live version of “The Trees” from Exit, Stage Left. Listen to “Digital Man” from Signals. Then consider that these songs came out in 1981 and 1982, when the biggest hits were “Bette Davis Eyes” by Kim Carnes and “Physical” by Olivia Newton John. (pg 101-102)

Overall, Even If It Kills Me is an enjoyable martial arts book written by an honest adult practitioner. If you are thinking about taking up martial arts at a somewhat older age…do it! And read Doni’s book before and during.

Full disclosure: I review a lot of YMAA books and DVDs over the years, because I like them and find they are of a high quality. Sometimes they offer free books for review. This is one of those book