An Evening with Annie Leibovitz and notes on her new book

An Evening with Annie Leibovitz at the Long Center, a sold-out talk with an opportunity for a signed book in one of one five cities to promote her new photography book Annie Leibovitz: Portraits 2005 – 2016, turned out to be one of those rare moments of engagement that happens in mass events where you don’t expect. Having attended and held many book signings, I’ve seen authors who are just tired and signing, rarely looking up from their ink-stained hand, and I’ve seen authors like my friend Bob Flynn, who wants to talk to everybody (and someone, usually my wife, ends up trying to hurry him a long so that we aren’t there for the next decade).

But connections are rare, and those that do occur are to be cherished. My lovely wife certainly will. 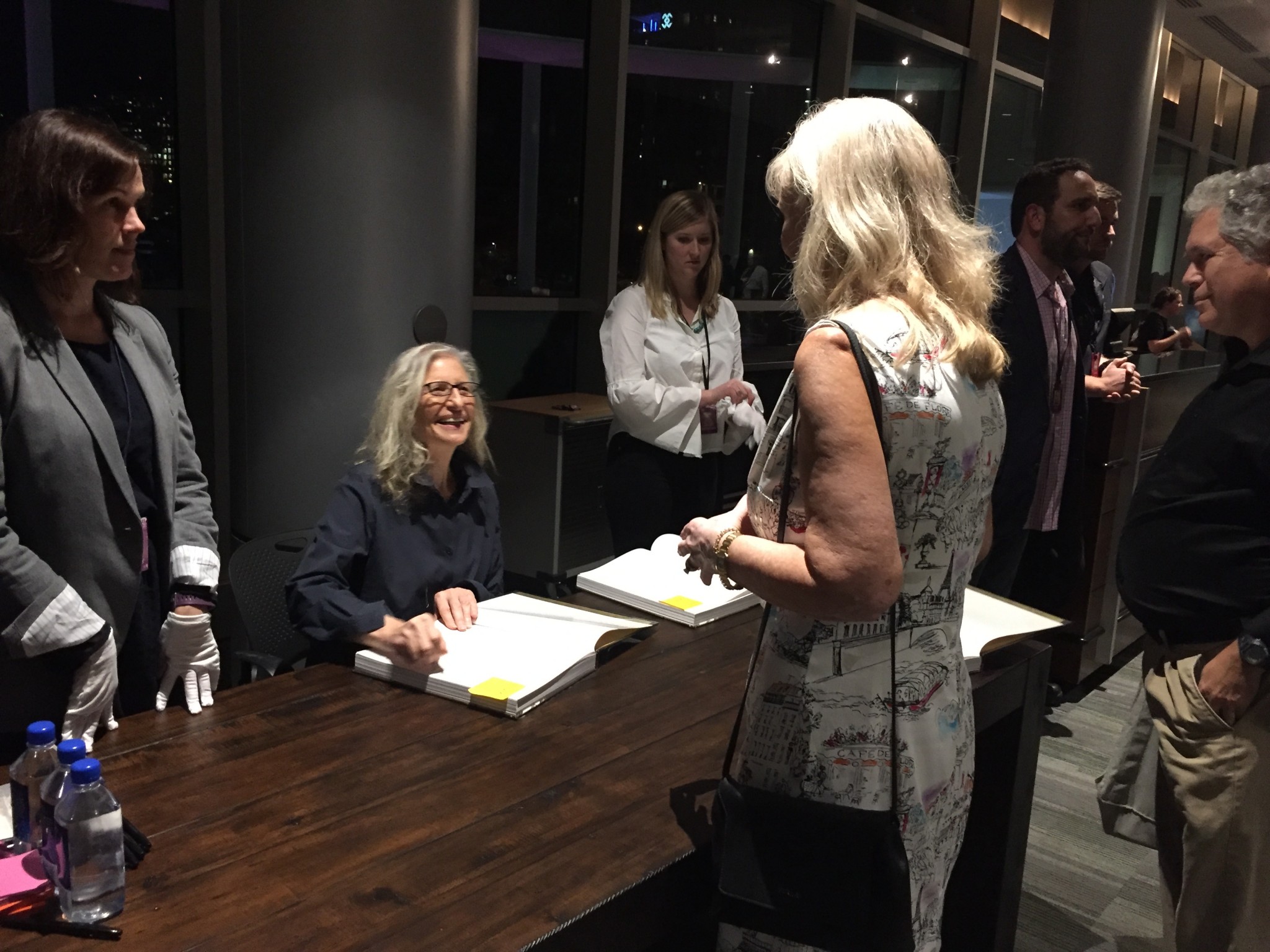 Ms. Leibovitz came on stage and immediately launched into why she made sure Austin was one of the only five cities (Dallas, Toronto, New York & London were the others), reminiscing about attending one of Willie’s picnics back in the 70s where the second-hand smoke drove her to the Salt-Lick.

The book is the third in a series of collections (the first being Photographs, 1970-1990, followed by A Photographer’s Life, 1990-2005) that are retrospectives,  a take-a-breath-and-look-back approach. She mentioned that after A Photographer’s Life which contained many family and personal pictures (many of which she displayed behind her talk) that she didn’t realize how revealing those moments of privacy would affect her, and rarely showed photos of her children after that book.

Ms. Leibovitz said that she imagined that the book would end with photos of Hillary Clinton as President. That, of course, did not happen. She instead ended it with pictures of an earthen works piece of art done decades ago near the Great Salt Lake that receding waters have recently un-covered, perhaps as a sign that things certainly do change in this world.

She also talked about the “creep” factor in the book, particularly when a photo that included Harvey Weinstein was shown, put into the book before the recent uproar against his outing as a “creep”.

Notes on the book

From my observations, the book consists of three types of photos: celebs, fellow painter/artists and objects from Ms. Leibovitz’ Pilgrimage collection. There are also a couple of essays. The first one is by Alexandra Fuller (of whom there are two pictures of her at her yurt in Wyoming) and is titled The Unseen Seer in 13 steps. In this essay, Ms. Fuller promises not to “blow the cover” of Annie Leibovitz. But she does come at it sideways:

The fool and the sage, the creator and the destroyer, the orphan and the caregiver, the warrior and the lover, the innocent and the magician, the seeker and the ruler. You can find them all in these pages, among these portraits.
Label them yourself. It’s not so hard
None of us can conquer the world, whatever we might think.
We can only inhabit the space we’re in.
The scaffolding of life is just that. (pg 29-30)

Ms. Leibovitz certainly uses pictures to tell a story or push a point, especially with the celebs: one of the first pictures shows one of the Kardashian’s (I’m happy to say I do not know which one) with a baby taking a selfie or video whilst her husband or boyfriend takes a photo with a tablet…a very pointed statement about how social media is being used for celebrity and has invaded so many lives. As she is an obvious fan of Ms. Clinton and the Obamas, the photos included with them are very stately and serious, while the only picture of Donald and Melanie Trump shows him in an expensive car with her pregnant in a bikini coming off a jet. The Trumps need little help looking out of touch with the rest of the world…yet that photo with the Kardashian one together with the Trump photo is an amazing indictment on the fascination of the world (or maybe just the States) with that kind of celebrity.

These pictures and several others like them show the persuasive power of this medium.

The pictures of the Queen of England seems to be rare glimpses, though staged. I especially like the one where the Queen is on the steps with all of her dogs (Audrey says they are corgis)…how Annie got those dogs to pose for that shot must be a trade secret, and is the same method she used to have all of the great-grand kids pose in the other photo.

Some of the other amazing pictures are of Jon Stewart and the Daily Show writers, Susan Rothenberg and Bruce Nauman (who I have no clue about, other than they are artists and the photo of them shows amazing caring), Bruce Springsteen, Clint Eastwood, Lin-Manuel Miranda (in Hamilton costume). Jack Nicholson on Mulholland Drive, and a great in-car pic of Judi Dench and Helen Mirren. There’s also a great set with J.K Rowling in one and the Gryffindor Quidditch team from The Sorcerer’s Stone movie on the next.

The pictures of the people in Ms. Leibovitz’ industry, other painters and photographers, are mostly unknown to me. In my world of software development, we have a concept we use called “in context”. It means to us that the program should understand as much about the user as possible – who they are, what they just did in the app, what they usually do – and have the app act like it has knowledge of that context. It strikes me that Ms. Leibovitz would make a great software user interface developer. All of these photos that are of people who I do not know provide me large amounts of context just by looking at the photos.

The pictures of objects from the Pilgrimage collection are an interesting assortment, including the ending earthen works photos referenced above.

The end of the book contains notes from Ms. Leibovitz that she read from during the presentation, and a short bio/description of each of the people in the photos. From her notes:

I am not by nature a studio photographer. When I look at the early work I did for Condé Nast in the eighties, I see myself struggling hard to deal with that. I was enamored with what Richard Avedon and Irving Penn did in the studio, but it took a long time for me to come to terms with it for myself. I always prefer to be in a place that has something to do with the subject. (pg 304)

One final note: even Ms. Leibovitz’ signatures and notes in books are art work. The “for Audrey” is a beautiful, full-of-effort remembrance of a lovely encounter. 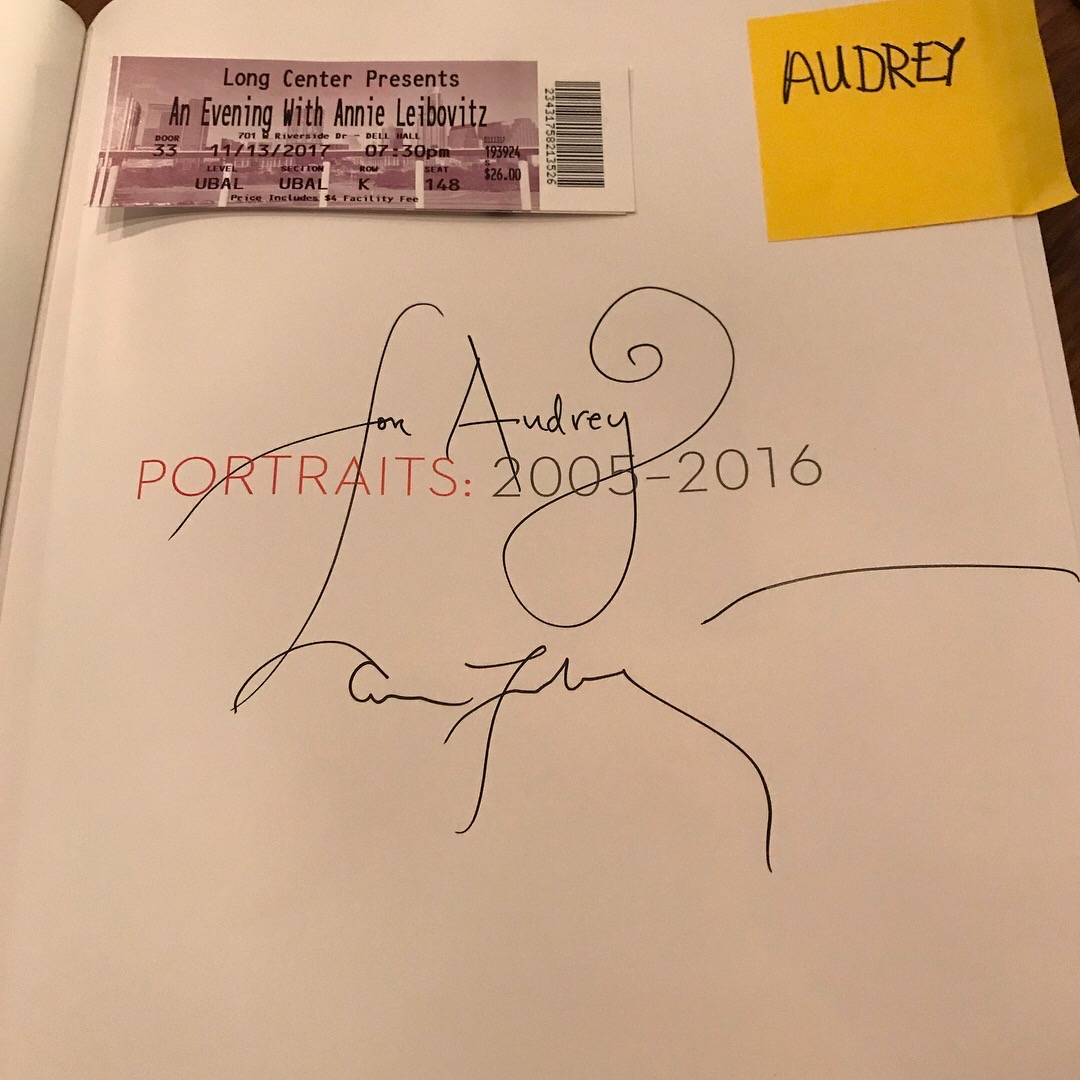