This is the 10th story in Street and Smith’s original publishing order. 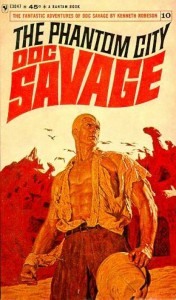 Two red letter events for Doc fans:
– Doc accidentally KO’s Monk, out cold with one swing;
– the first appearance of Habeas Corpus, the pig Monk buys in Arabia on this adventure, purely to poke fun at Ham.

As in previous posts, I highly recommend reading these in the originally published order. This story has a small but continuity providing reference to The Czar of Fear, the previous chronologically published story. And the next is the first appearance of Doc’s cousin, Pat.

Arab hoodlums (lead by Mohallet) first try to bully Doc, then negotiate with him on obtaining the submarine used and publicized from an earlier adventure (The Polar Treasure). While fighting them, Doc finds an exotic white- haired women dressed in something akin to Arab dress, speaking a tongue somewhat like Arabic that even Doc does not understand. He loses the girl when Monk and Renny jump him in the dark (Doc is knocked down for one of the few times in the stories, but puts Monk out with one punch). Determining that the Arab gang has recaptured the girl and is holding her prisoner, and the hint of a strange tribe of people in an unexplored desert in Arabia that contains treasure, Doc and the boys follow the Arabs in their sub across the Atlantic to Arabia.

After some back and forth battles and trickery (where Doc admits he fell for a ruse, a rarity), Doc and Mohallet share the sub. Mohallet’s men are in control with Doc and team locked up, but a contagious itching powder on back of the pig Habeas Corpus (a featured part in his first role!) has the Arabs begging for the cure. The tables are turned as the Arabs are locked up, with Doc’s team back in control and searching for the Crying Rock, secret entrance to the place where Ja, the white haired girl (who has a bracelet of platinum) is from.The entrance is a very well-described passage through an underground cave (hence the need for the submarine).  The entrance is collapsed by Mohallet’s men. They emerge from the cave into an oasis in the desert, where “White Beasts”, white haired men who look like Monk, savagely attack them. Mohallet speaks their language (from having the girl prisoner) and builds an alliance against Doc. Doc takes the girl (his men are captured), and she guides him to her home, The Phantom City. Unfortunately, it too has been overrun by the White Beasts.  Doc ends up rescuing the citizens and his men, drowning the bad guys as the collapsed entrance gives way and floods the area.

Excellent locale, another beautiful woman who Doc spurns, and a new pig. What more could you ask for?