This is the ninth story originally published by Street and Smith. 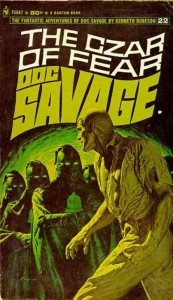 The Czar of Fear has one of the least exotic locales of any Doc Savage story. Following chronologically after The Lost Oasis and The Sargasso Ogre (which are fun reads because the story line connects and the locales are unique and well-imagined) The Czar of Fear is a let-down.

Prosper City is being terrorized by The Green Bell, an unknown whose makes his enemies insane with the tolling of a bell (the green comes from his hirelings strange uniforms). Three citizens escape to track down Doc in NYC; one of them is murdered, and this is pinned on Doc. He eludes the police and the Green Bell’s thugs and, with the team of five (plus the two surviving citizens and one hanger on) in tow, heads for Prosper City. The citizens are starving, the mines have all been shutdown by the Green Bell’s minions. Here, Doc demonstrates his business and psychological sense: her puts money in the bank, offers to buy all of the shutdown mines, and provides food and wages for the citizens. In this way, he attacks the Green Bell financially and sociologically. The Green Bell frames him for another murder, but Doc eludes capture while putting the pieces together of who the Green Bell is.

This story features yet another beautiful female smitten with Doc, the man who refuses female companionship (for their own safety of course).