This is the sixth story originally published by 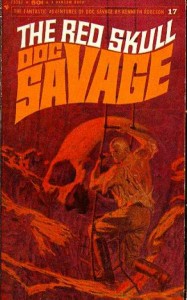 Street and Smith. The Bantam one I have is in great condition, though it is a 5th printing (August 1977, ten years after the 1st Bantam printing).

The Red Skull has, thus far in my re-read, the absolute least exotic locales. Granted, New York City in the 30s and 40s is great, and it is in almost every story. The Arizona desert is less enthralling, although this story and setting does reflect an old western pulp at times.

The western part starts early, with a man named Bandy Stevens getting into a shoot out on a golf course in New York City as he tried to make his way to see Doc Savage. Bandy is carrying a letter from the three owners of a company building a dam in Arizona that they think is being sabotaged; they want to enlist Doc’s help to find who is behind it. But the saboteur has sent folks to ambush Bandy, and they poison him just as he reaches Doc. The ambushers, afraid Doc will follow up on the lead, try to ambush Doc and the gang. They end up kidnapping Monk’s beautiful blond secretary (of course she is), and, after trying to throw Doc off the scent, take her back to Arizona. Doc and his five follow, where they investigate the three owners, the dam and what someone would want to undermine the project, while trying to “save the girl”.

Johnny, always described as gaunt, gets a few good licks in this one, the first time in the series that I can remember him being singled out in action.