After eighteen years, the publication of a new Doc Savage novel is finally on the horizon. The Desert Demons, written by Lester Dent and Will Murray writing as Kenneth Robeson, makes its debut in July. 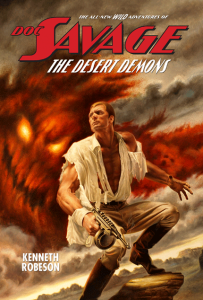 I was privileged to read and review an advanced copy of this novel, thanks to the author. By excellent coincidence, that read happened in between reading Paul Malmont’s fact/fiction novels The Chinatown Death Cloud Peril, and The Amazing, The Astounding and The Unknown. These novels depict the life of Lester and Norma Dent, among others, as adventureres, emroiled in tales which resemble their own fiction.

I’ve posted my review of this new Doc Savage on SFSignal.com. An excerpt is below, and I thank Will Murray for trusting me with an advanced copy to review:

Patience. That is a shared characteristic of Doc Savage fans. A forty-two year wait was endured between the 1949 publishing of Up From Earth’s Center (republished by Bantam in 1990) and the 1991 books by Philip Jose Farmer and the next Kenneth Robeson, Will Murray. Seven books were written by Murray, from the notes of Lester Dent, the co-creator of Doc Savage, and published in 1991-93. Then, nothing, except a battle by Will and others to have more Docs published.

So, after an eighteen-year wait that would have George R. R. Martin reader’s shouting for the author’s head (oh, wait! they already do that), comes the publication of The Desert Demons, written by Lester Dent and Will Murray with a cover by Joe DeVito.

From a historical perspective, the 28 pages of Afterwords by Murray and DeVito, plus the extended biographies of Dent and Murray, are worth the price of admission. I sincerly hope they survived the editors cuts intact (my review copy was an advanced reader, so I can only hope).

But the story is what is important. And it is vintage Doc. Not vintage “unemotional, superhuman” Doc, but vintage “human, scientific investigator” Doc…with some science fiction thrown in.

The story takes place in the summer of 1936. Red clouds are descending on Californians, at first seemingly demons called down by an Indian’s rain dance. When they engulf people, they leave behind only a white powdery substance; when the clouds destroy cars and buildings, all that is left is glass. Hollywood types, professors and a lady named Doris Duff are all said to have disappeared in the copper clouds.

In my re-read of the Doc Savage books, I’ve been listing my favorite Doc feat and Doc gadget from each story. Both are easy selections in this new story:

�Doc jumps on a grenade:
Doc braked expertly. The cab rocked to a halt. Flinging the door open, he removed his helmet of hair, shucked off his coat, then wrapped both around the grenade and slammed himself on the street, his bundled coat beneath him.

The sound of the grenade letting go was muffled, but not greatly so. Fiery streaks spurted from beneath the prone figure of the Man of Bronze. Grayish-black smoke dribbled out. A deathly silence followed.

�And, of course, the stratosphere dirigible is an easy gadget selection:
From an engineering standpoint, the stratosphere dirigible was decade ahead of its time. It was streamlined to the nth degree, possessing no hull projections of any kind. Motor gondolas, as well as the control cabin, were set inside the rigid gasbag. Every rivet and girder was manufactured from an ultra-light alloy, as was her silvery skin. The gas that provided buoyancy was non-inflammable helium.

It was no air leviathan, however. The great ocean-crossing passenger airships would have dwarfed it. Propulsion was driven by high-speed Diesel motors, turning ordinary propellers. But attached to the dirigible’s tapered tail was a ring of rocket tubes–product of Doc Savage’s inventive genius. This rocket array was in the nature of an auxiliary mode of propulsion. It was impractical for most maneuvers, such as take-offs. But high in the stratosphere, the rockets could be safely engaged, producing stunning speeds that would have been the envy of many European fighter pilots.
In the Afterword, Murray walks through which pieces of the story are Dent’s writing, which are his and which are a combination. If you’ve read Doc Savage novels from different points in history (the first series which is mostly Dent was published from 1933-49, with Murray’s original seven published from 1991 to the end of 1993), you can tell a difference in the character of Doc, and in the writing style. Murray’s writing style is more polished, most likely because he is writing without the constraint of the very tight pulp timelines (read one of the first twenty Doc Bantams, then read Python Isle to see the difference).

However, in this novel, which the afterword says is partially Dent and partially Murray, the story style is consistent all the way through.

The cover by Joe DeVito deserves mention, and it gets detailed coverage in the Afterword. DeVito used negatives from photo sessions given to him by Jim Bama to create the cover, and will be doing the covers for the rest of the series.

According to the beginning of the book, the planned titles are: