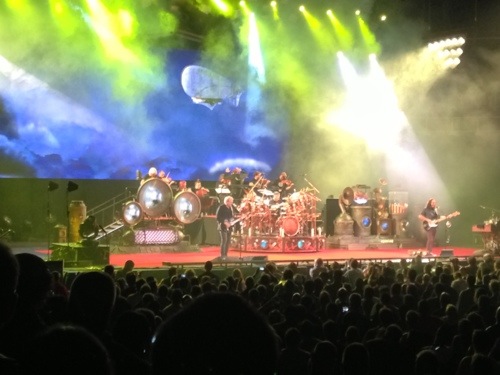 In the late 1970s and early 80s, the race to get primo concert seats was physical, not electronical. Bob, Tom, Dan, Slim, myself and a varying cast of others would wait outside of Joske’s, a department store in North Oaks Mall, San Antonio, in a foreshadowing of what Apple fanboys do before a new iPhone launch. Depending on the show, the wait could be most of the evening, or just early morning. When the mall opened in the morning, we’d race in and get in line at the ticket booth inside Joske’s to purchase as near to front row tickets for Rush, AC/DC, Judas Priest, April Wine, UFO and a variety of other acts that came through our Rock and Roll capital of the world, SA TX.

In that time, and at our age (high school and college) the shows were more raw, less slick and technical. There were pyrotechnics, there were lighted stages, and occasionally there were graphics and pics. 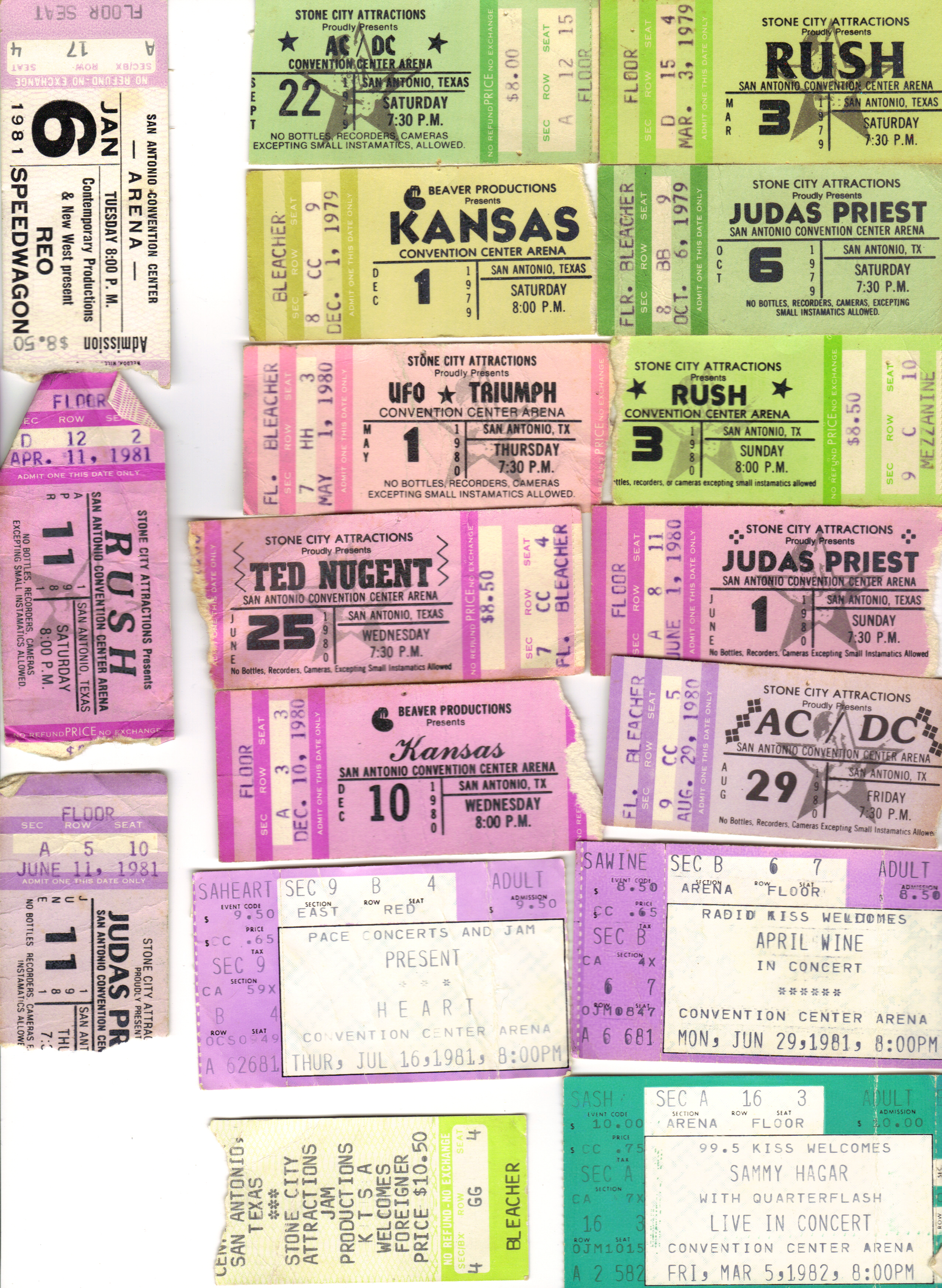 But always, there was the music that we listened to, loud and proud, on LPs and in our cars, on 8-tracks and cassettes…singing, air guitaring, air drumming…being enveloped by the songs. That carried over to the concerts; sitting close, singing (or yelling, by some definitions) every song, air guitaring so demonstratively that we sometime banged into each other. Some songs, those that we listened to repeatedly, became immersive experiences live: the band and me in a tunnel vision of shared entertainment, where no outside thoughts intruded. At once concert, I found a discarded broom, apparently used by the cleaning crew; much to the chagrin of the folks in the row behind me, it became my air guitar and air bass. I do not believe I put out an eye with it, but I do believe I was note perfect.

Three decades later, a few days ago this month (October 2012), I took a forced flashback into those days, dragging my lovely wife to see Rush at Barclays Center in Brooklyn. Both myself and the boys in the band (Alex Lifeson, Geddy Lee and Neal Peart) are older (the two front men and I are in our fifties, the “new guy”, Peart, just turned 60). The crowd was noticeably older, and, as one of our seat mates told my wife, mostly male (“no lines for the lady’s room, but huge lines for the men’s”). I’d made her a copy of the playlist from one of the concerts earlier in the tour, but she’d only listened to them a couple of times, and after the concert confessed that all of the music sounded the same to her, as most music does if you are unfamiliar with it. Her opinions form an interesting contrast to those of us subsumed by the cult of Rush. 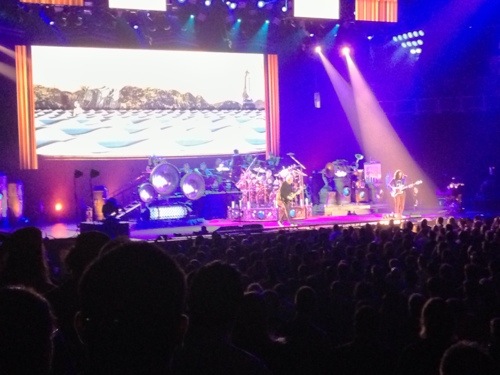 It couldn’t be the same, of course. Or could it? As soon as the lights went down, the first easily recognizable notes of Subdivisions came out (as did the smell of weed; apparently some things never change) and the crowd was on its feet…and stayed up throughout the entire concert (except for intermission and slow The Garden). My wife had the guy behind her singing (or yelling) in her ear, and me singing (not yelling, but, of course, note perfect) in front of her. Three rows down, three buddies were singing in chorus, usually arm in arm, head banging to the music together.

It was nostalgic. It was entertaining. And, in the end, yes, there was air guitar (and air bass and air drums).

It was different, more multi-media with the large screen at the back playing mini-videos, smaller screens in the front with birds and objects flying from screen to screen. And there was even the Clockwork Angels String Section, a set of four or five violinists with a couple of cellos joining in for the playing of the new album….but this string section rocked. I did not know that you could play violin and head bang at the same time, but these folks did it from the opening number.

With such a long list of songs to choose from, there’s no way one can hear all of ones favorites at a Rush concert (Geddy introduced the song The Analog Kid as “a song celebrating its 30th birthday”). Though Working Man was on the set list, it was replaced by Spirit of Radio, making the 2112 encore pieces (they played part I, part II and part VII) the oldest songs in the sets.

In some ways, seeing Rush is like seeing an old friend who tells stories that you’ve heard before with a few new twists. They share their humor through the videos (the three of them as “gnomes” when the taxman comes to see the Watchmaker) or through quips…or though those impromptu moments. We witness ones of those when the BEST POWER TRIO EVER (had to throw that in) was jamming through 2112 and Alex broke his guitar. Geddy and Neal kept going as Alex rushed to the side of the stage…but there was no replacement ready. As his two bandmates kept going, we could see them laughing at him. So Alex danced a jig on the side of the stage to much applause, until he could get his backup guitar and once more join the fray. The sense of humor of the boys in the band was on display, much like that which allowed them the use of Fly By Night on the excellent Volkswagen commercial (during an interview, when asked why they finally consented to the commercial use of one of their songs, Geddy responded “because it was fun.”)

My air guitar made several appearances, but it stayed out as I pogoed my way through YYZ. And the best thing was I didn’t poke my lovely wife’s eye out. She remained standing, clapping and cheering, on sore feet from the two ten-mile walks around NYC that we’d done the day before. She’s done Lambeau field in the cold and a Rush concert with a vast majority of male cult members…she is gorgeous and a trooper.

My impressions from the concert: Best of the first set: Analog Kid and Far Cry. Best of the second: the strings section for Clockwork Angels, Headlong Flight and The Anarchist. 2112 in the Encore was the best by far. If you haven’t gone to see them on this tour, go. 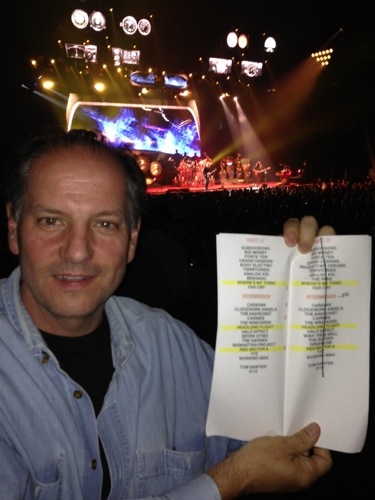 Set List (which I am holding in the pic while Rush plays Seven Cities of Gold in the background):