I’ve seen Rush (the best power trio, the best rock band, with the best drummer, best bass player and best lead guitarist in the world – yet I remain totally unbiased!) more times than I can remember. Back when there were paper tickets, I’d keep the stubs as a reminder. Now in addition to the stubs (and thanks to my lovely daughter’s gift) I have this massive book – RUSH: WANDERING THE FACE OF THE EARTH – that contains their complete touring history!

RUSH Wandering the Face of The Earth was published in October 2019. Neal Peart died in January 2020. The timing of this retrospective of a band that meant so much to so many could not have been better. 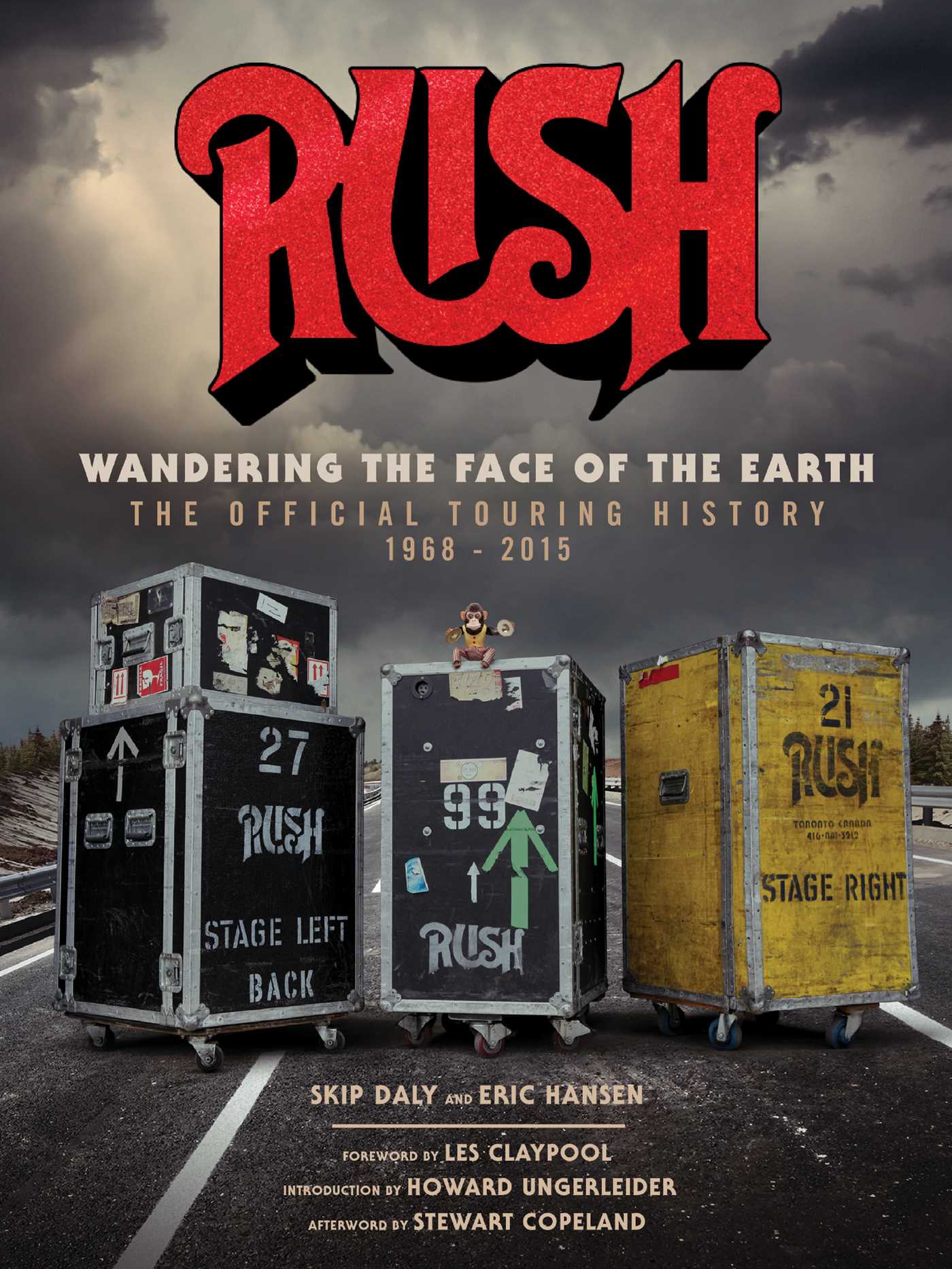 The authors of RUSH Wandering the Face of The Earth are Skip Daly and Eric Hansen, two Rush super fans. Their bios belie their ages – Skip’s first Rush concert was on the Presto tour, and Eric became a fan after Permanent Waves and Moving Pictures. This one of those occasions when being older is definitely better – as you’ll hopefully agree after seeing my ticket stub collection! :) Eric also started the Rush fan site Power Windows.

Each chapter in their book contains one tour. Most tours were, as usual, after an album was released. In addition to a paragraph and details of each tour date, there are a few pages of description, quotes from the band and other folks on the tour, and quite a few photos.

This book reads more like a history of the band combined with a guide to each gig.

Of course, the first thing everyone does when getting this book is look up the concerts they are sure they attended and try to piece together the memories of the ones they think they attended. It’s a 45 year Rush history, and RUSH Wandering The Face Of The Earth has the notes, locations and set lists (plus a lot of photos) to fill in the gaps when your memory is as full and old as mine. I’ve used the book’s table of contents, which is broken out by tour, and added the dates from the gigs listed to help with my own timeline. That’s one of the best things about this book – it allows the reader to stroll memory lane with the band’s timeline juxtaposed with their own.

Foreword by Les Claypool of Primus

Introduction: A Master Class in 45 Short Years by Howard Ungerleider

My favorite quote from the pages describing this part of the Rush touring is how the name of the band came about, from the original drummer John Rutsey’s older brother Bill.

“I can’t remember any of the silly names that they were coming up with, but I was sitting upstairs and I just finally had heard enough, and so I shouted downstairs ‘Just call the band Rush!’ And they said ‘Rush? What’s that?’ And I said ‘You know, like drugs!….Rush!’. So that’s exactly how it happened.” (pg. 21).

The very first concert listed in the book is September 6, 1968. I was almost 7 but for some reason my parents did not take me to this concert. It might have had something to do with the fact that it was in Toronto and we were not.

There is discussion in the pages describing this tour of how the album was  not well received and how it was a low point for the band. I still love and listen to this album, and The Fountain of Lamneth is one of my favorites for contemplation.

This chapter has the first mention I can find in the book of a tour that came to a town where I lived (San Antonio, Texas, the rock and roll capital of the world) is on page 63 (October 28, 1975). Rush played at Randy’s Rodeo, a country and western place on Bandera Highway that used to be a bowling alley.  The blurb for the concert mentions KISS-FM and DJ Lou Roney who I listened all through high school and college. Our family had just moved to San Antonio, and I’m pretty certain my mom did not let my 13-year-old self go to this concert.

There’s a description here of the recording of Rush’s first live album ALL THE WORLD’S A STAGE at Massey Hall in June 1976. This and the live recording of Working Man is what hooked me on Rush forever.

Rush came back through San Antonio June 7, 1976. Thin Lizzy was the opening act. I’m pretty sure I missed this one.

Artful Dodger and Leslie West opened for Rush in San Antonio January 8th and 9th, 1977 (pg. 120). I’m pretty sure this was my first Rush concert, as I can still remember two things: how small the guitar looked in Leslie West’s hands, and yelling for Rush to play “Working Man” (as I had worn out my brother’s copy of ALL THE WORLD’S A STAGE playing that song (sorry, Terry)).

One of the most awesome concerts ever – October 22-23, 1977 with UFO opening the show. Max Webster played as well, and hearing the all of the songs on that album live was tremendous (pg. 141). According to the notes, the Municipal Auditorium held 5,800 people.

The show that I have the oldest paper ticket stub for is mentioned on page 169. It featured supporting act April Wine, who (according to my trust ticket stubs) we saw as a headliner in San Antonio two years later. This show was at the Convention Center Arena.

Update: see my brother’s comment below. He still has the t-shirt from that concert. A picture of it that he sent me is included below. 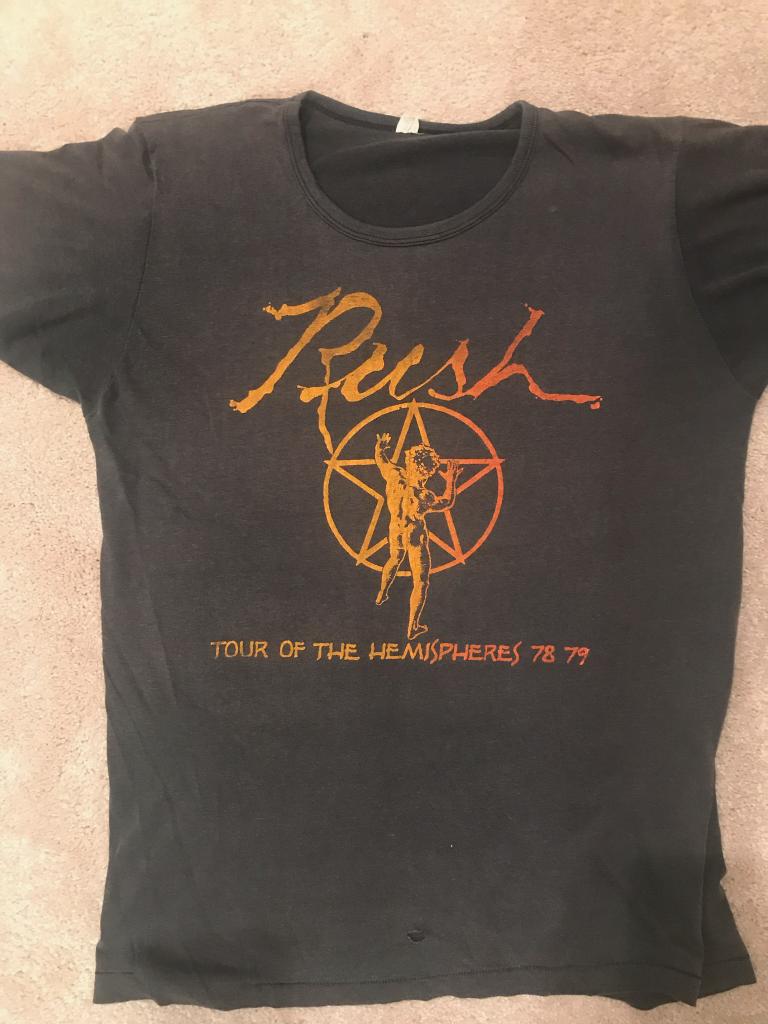 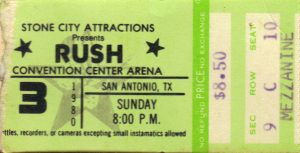 The last of the paper ticket stubs I have to jog my memory – April 11, 1981 (pg. 208). There’s a paragraph in the book that says immediately after this show the band flew to Florida to watch the launch of the Space Shuttle, then flew back for another gig in Fort Worth.

When I first saw the name of this tour I instantly thought that it was a Geddy boondoggle to get close to baseball spring training! It was, however a warm-up to get in shape for the Signals recording sessions (pg. 222)

The description of this tour mentions Primus as an opening act (pg. 304. Les Claypool, the singer and bassist for Primus, wrote the Foreword to this book). Primus is starting a tour this year (2020) where they plan to play the entire Farewell to Kings album! They will play at the excellent ACL-Live venue in downtown Austin May 29, 2020!

The chapters also talk about the set lists for each tour. This one states that this tour “marked the first tour that featured nothing from Rush’s first four albums – and the only tour ever to skip 2112 completely.” (pg 320). It also mentions the band Primus again, saying that their jamming on the Hemispheres tracks during sound check convinced Rush to bring back parts of that album on this tour.

After this tour was when Neil temporarily retired after his daughter was killed in a car accident and his wife later died of cancer. Five long years passed.

There’s a great description here when the trio shared a moment at their first concert back on stage (pg. 347). This tour also included the November 23,  2002 Rio concert that was filmed for the Rush in Rio DVD.

“Every album was represented in the R30 set list save for Presto.” (pg. 364) Though there was no album of new music to tour on, this tour was right after the album Feedback which featured covers of classics.

Deservedly slowing down from their relentless touring pace, the band had three years between tours.

This concert tour was the first time I dragged my lovely wife to see the boys, at the Barclay Center in Brooklyn, New York. I had tickets to see them in Houston, but when I bought them I did not realize that we had already booked a trip out-of-town. This concert with the few string section for the Clockwork Angels tunes, was outstanding. And when Alex’s feed to his amp malfunctioned, we got to see Alex dance a gig. Full notes (and a pic of me holding the set list) here. 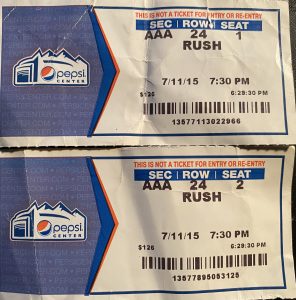 We were in Denver so that I could acclimate for a run (the Pikes Peak ascent). We were staying downtown, testing out high-rise living (which we now do full-time) and were within walking distance of the Pepsi center. I gotten the concert dates screwed up (again thought we’d see them in Houston) so the day of the concert I called the arena – and ended up with FLOOR SEATS. It was yet another flashback to the days in high school when we’d wait in line for floor tickets. The final concert (with my wife in tow yet again) was once again one of the best shows I’d seen.

Besides getting floor seats by calling the arena the day of, the best thing was getting paper ticket stubs again!

RUSH Wandering the Face of the Earth is not just a great tour book. As each chapter went through I went back and listened to the albums that were represented by the tour described in that chapter.  Music always bring back memories. With Neil Peart’s passing, the R40 really was indeed the last time we will see the trio live. But they certainly live on in their music, and in awesome remembrances like this book. 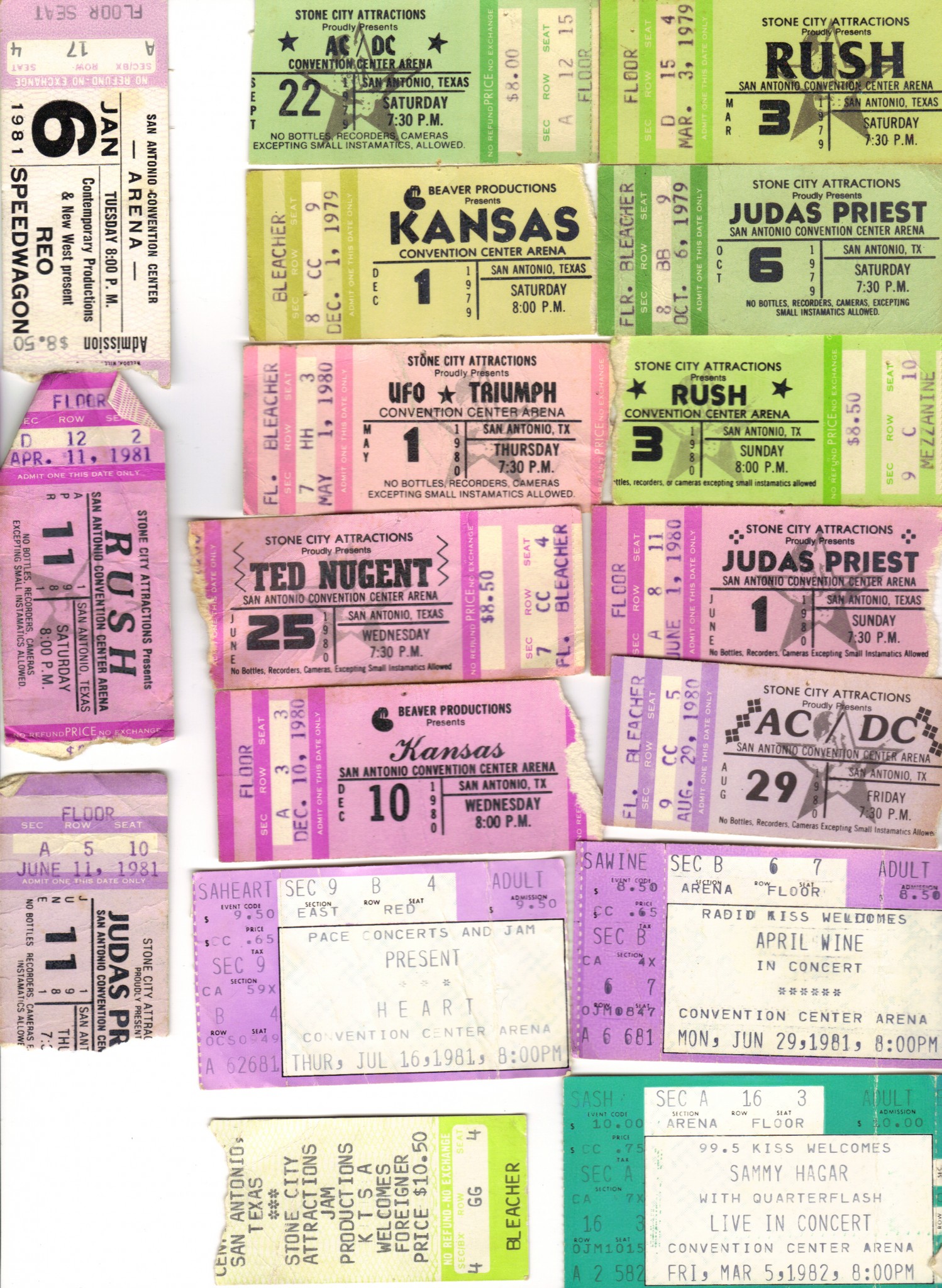 Just look at those ticket prices!!!!