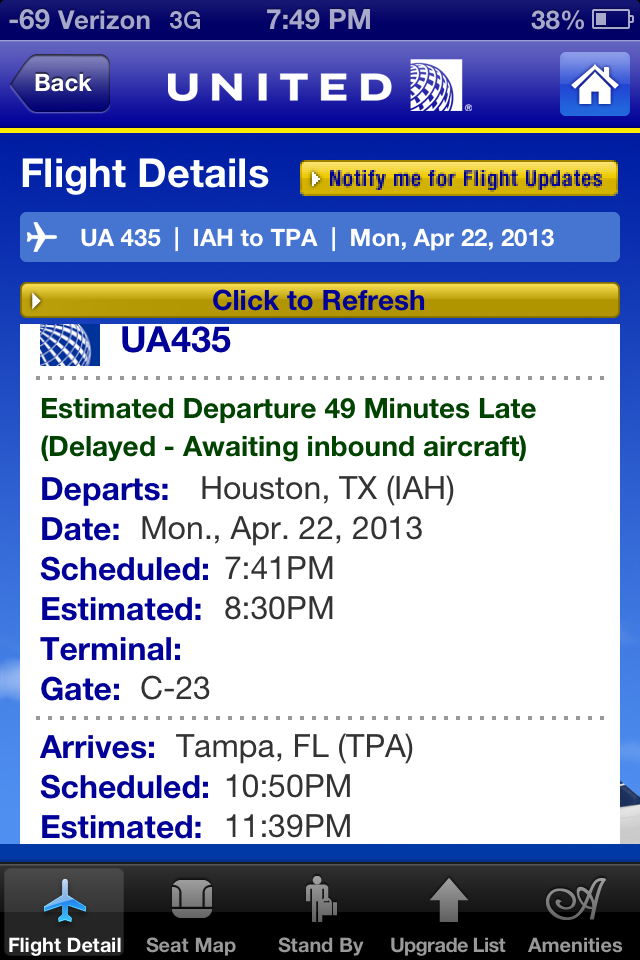 Houston is a United hub so to get anywhere we fly United. Our only other option is to drive 90 minutes south to the other airport to take Southwest. Sometimes we feel like the drive might be worth it, especially in the months after the United-Continental merger. Flights were chronically delayed, and it seemed like the airline personnel were not happy about the merger.

United HAS gotten better. But flight delays are a frequent problem. According to the US Government’s Bureau of Transportation Statistics (click here, select United, look at the table on the bottom right), United’s OnTime percentage for Departures from March 2012 – February 2013 was 76%, ranking them 15th of the carriers with revenues over $20 million…that’s close to the bottom.

My recent experience is much worse than that. Of my last four flights (all between IAH and TPA), the on-time percentage is 25%. Yes, only one out of my last four flights was on time. And, yes, when United sends me those surveys after each flight, I tell them this is the best way to keep customers: on-time flights. Nothing else is more important.

Curiously, on my last flight out of Houston, it appears that United was “gaming” the on-time statistics. Via United’s nice little mobile app, you can see my flight delay.

As you can see from the screenshot, the flight was about 50 minutes delayed. Further, it helpfully says it was delayed because the plane was late coming from the previous hop. The app has a great feature that allows you to check on the previous flight (“Where is this plane coming from?”). It is helpful, as it lets you know if the plane is truly delayed (you can tell if the previous flight is in the air) or if it is indeed in danger of being cancelled (the plane hasn’t left yet and is quite delayed). 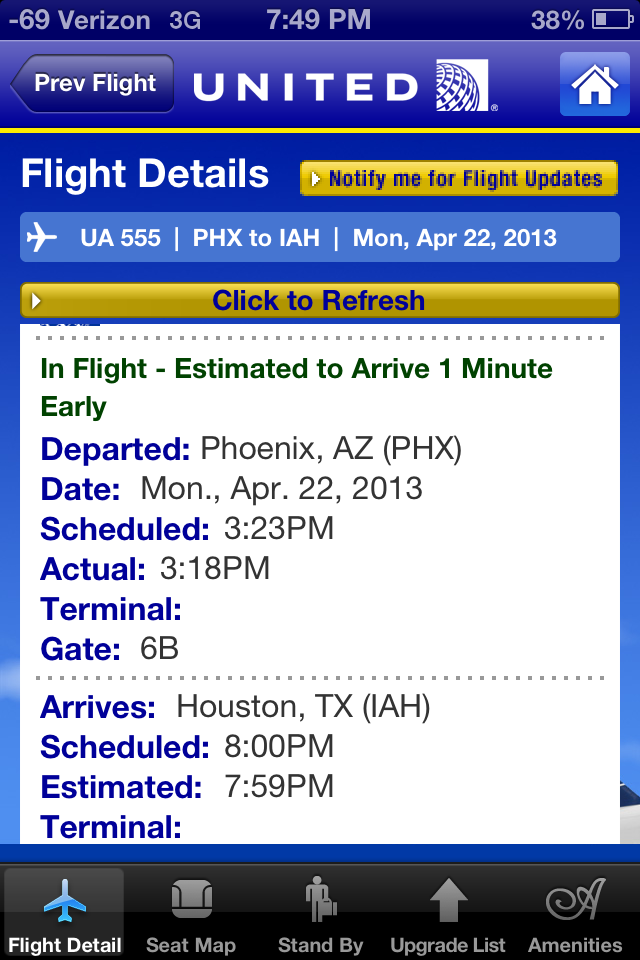 Flight bringing plane to my flight

I followed that link, and to my surprise, it stated that not only was the in-bound flight that my “delayed” flight was waiting on “on-time” but it was slated to arrive early.

How exactly does this work? The inbound flight is scheduled to land at 8pm, which is 19 minutes after my flights schedule departure.

Perhaps they cancelled the inbound flight and redirected a different flight to re-use the aircraft? Uncertain. I was at the airport earlier than usual due to concerns with the air traffic controller layoff, and all I saw was a gate change…and these very strange statistics.

I’m assuming that United counted this as one delayed flight and one on-time, but it still begs the question about how the previous flight was scheduled to arrive later than my flight was to depart.