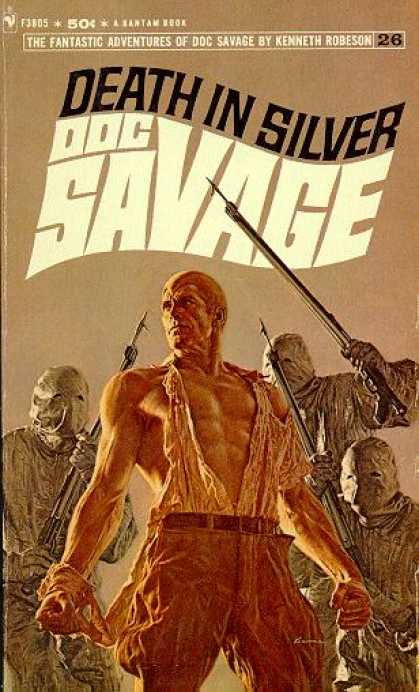 murdered, his office destroyed by a launched missile. Monk and Ham are in Monk’s lab in the same building, and go to investigate. They are ultimately taken captive by the Silver Death’s Head gang (so named because of their silver costumes). the gang apparently responsible for Winthrop’s murder.

The Silver Death’s Heads gang launches a crime spree in New York City, including the murder of Winthrop, robbing armored cars, banks. etc.. They net over $1 million, but there is a larger conspiracy at work; multiple shipping companies are being acquired under mysterious circumstances, accidents befalling their leaders, and stock transactions worth over a billion.

Doc enters first to save Ham and Monk, then to stop the Silver Death Heads gang, as they try to get him out of their way.

This is the first adventure in the re-read where only Monk and Ham (with a brief appearance by Pat) join Doc. Renny is off working on the dam project in South Africa, which is a large part of the novel Python Isle by Will Murray.

This also makes the first adventure in the re-read where the action stays in NYC (and the NY Harbor).

There is a reappearance (from #4 The Polar Treasure and #10 The Phantom City) and apparent sinking of the Helldiver submarine.