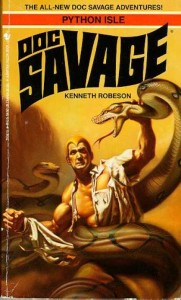 Kenneth Robeson moniker. From a Doc chronological perspective, it is usually placed after Death in Silver (which is referred to in the story).

Diamond smuglers King Hancock and Blackbird Hinton, in their ship the Mighty in the Indian Ocean, see a plane heading toward them. They shoot it down, think it is the authorities, but it ends up being piloted by Tom Franklin, lost over the Indian Ocean several years ago, with a passenger, Queen Lha, who speaks no English. Their plane is patched in damaged places with pure gold, peaking the smugglers interest. Franklin will only say that they are looking for Doc Savage.

Franklin manages to escape, gets to shore in South Africa, and finds that Renny, one of Doc’s aides, is finishing an engineering project there. Realizing that Franklin is close to having Doc Savage in the mix, Blackbird Hinton phones Bull Pizano in NYC to stop Doc from getting the telegram. Bull is a large strong man, and takes out Monk easily (much to Monk’s chagrin) and manages to capture Ham. Doc, just back from the Fortress of Solitude, frees his men, finds out that Renny is now captive, and hops aboard the Zepplin Aeromunde (from The Lost Oasis) to head to South Africa. Bull and gang are aboard as well, and think they have dumped Doc, Monk and Ham into the ocean. But, upon landing, they free Renny, get Franklin and the Queen and hear her story. She is a descendant of Solomon, from the Kingdom of Ophir and speaks ancient Hebrew (which Doc understands a bit)…and now lives on Python Isle. The smugglers are after the treasure of Ophir (hence the gold), and all race to Python Isle. They do have pythons there, and yes, Doc does fight with some of them, but here the spoilers end.

There are obvious differences between Lester Dent and Will Murray’s writing style, and I found the change refreshing. Mr. Murray added more humor to the Monk and Ham exchanges, more competition amongst the men, and more description of everything, including Doc. I’m looking forward to more of his books in my re-read, and to his new Doc novels.

Skull Island by Will Murray reviewed at SFSignal.com