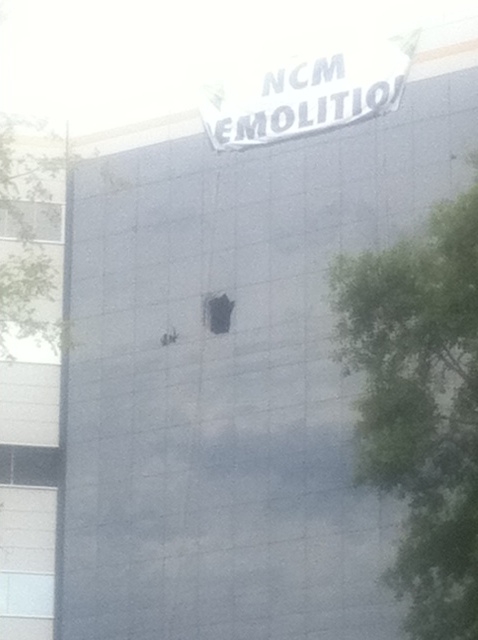 campus comes nearly ten years to the day after the business implosion of Compaq through its acquisition by HP. Like Compaq, CCA7 and CCA8 on the Houston campus, now owned by the local community college, had been deemed too expensive to renovate; the choice was made to blow them up and rebuild.

This parallels not only HP’s recent “blowing up” of its tablet and (profitable) PC business, but the final disposition of the great COMPAQ Computer Corporation, a company that I proudly worked at for fifteen years. Compaq in the beginning was an incredibly innovative company in portable computers and servers…but in the later years was one Steve Jobs shy of a full Apple cart.

It is easy to envy Apple, now one of (if not the, depending on market closings) the highest valued companies in the world, and in the enviable position of charging and receiving premium prices on almost all of their products. The history of Apple is well known, and its story and that of Compaq can be seen as mirror images…until Apple’s turning point, when Jobs returned, grown up and ready with innovation, differentiation and a long term plan.

In between the leadership of John Sculley and Steve Jobs’ return as interim CEO in 1997, Apple faced similar crossroads to Compaq’s at the same time. Obviously over-simplified, in 1998 Compaq chose to follow the kings of the day, and emulate IBM by acquiring services (and people and debt)-heavy Digital Equipment Corporation; while Apple chose a gambler’s path of innovation, a path to no longer try to compete on the speeds and feeds of cpu/memory/disk with the PC vendors of the day, but to create a content consumer/content creator vision, to innovate and differentiate.

Three years after Compaq acquired Digital Equipment Corporation, HP acquired Compaq, a controversial acquisition according to HP’s board (mixed if with a bit of Deutsche Bank conflict of interest scandal). The services division of the combined Compaq and DEC was not meshing, and was not proving as “accretive” as had been hoped in the original merger documents. CEO Eckhard Pfeifer was let go in 1999, and by 2001 Compaq’s meteoric time in the technosphere flamed out.

Could those paths have been switched? If Compaq had not purchased Digital, would it still exist? There were many variables, and I’ll leave the possible scenarios to the academics, to future business school case studies. As a man I admired said, “you can’t un-honk a honked horn.”

Like many people, I found my fifteen years working at Compaq an incredible experience. I met the love of my life while working there. After we were married, she would look out the windows in the break room at CCA8 and see our daughter waiting for the school bus in front of our house in Lakewood Forest. With the demise of those buildings, and the presumed demise of the last vestiges of Compaq with the pre-announced sale of the PC business, we choose to think back fondly on those days , the great people we worked with… and whimsically wonder what could have been.