According to one source, Brand of the Werewolf 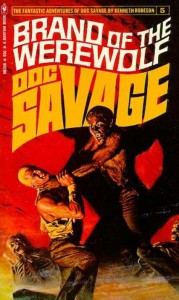 the best selling Doc Savage Bantam reprint,selling over 185,000 copies. In the Bantam series, this book marks the  first appearance of Pat Savage, Doc’s cousin, as Doc travels to Canada with his team for some R&R, only to learn of the death and possible murder of his uncle Alex. They encounter El Rabanos, Senor Oveja and his daughter, who believe Doc Savage attempted to kill them. A strange gas knocks some of Doc’s crew out, accompanied by the mark of a werewolf.

Doc and his team follow the trail, which leads to Alex Savage’s land on the coast in Western Canada. In the meantime his cousin Pat Savage and her servant have been captured, with one servant killed. The captors are looking for an ivory cube, that Pat’s father had found and hidden. The cube turns out to have a map of where an old Spanish Galleon, fleeing Panama with treasure and searching for the Northwest Passage,  is buried.

Doc and his team, of course, figure all of this out and Pat Savage is introduced. The book also includes Doc’s first kiss (at least in the books) from Senorita Oveja.  The mark of the werewolf is never explained, leaving us to assume that El Rabanos was leaving it to frighten those involved. Originally printed in 1934, the depictions of planes, train porters (heavily accented Negroes) and swarthy criminals (Spanish) reflect the times of the writing, though the time period is never mentioned.