This is the second story originally published by Street and Smith 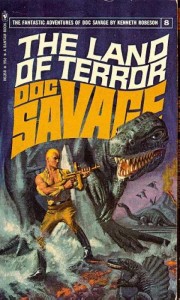 (and the 2nd in the PJF chronology) and it is a bit rough around the edges. A professor of chemistry, Jerome Coffern, one of Doc Savage’s early teachers and a friend, is brutally murdered, his body dissolved with a strange gas called “the Smoke of Eternity”. Only a forearm wearing a watch that was a gift from Savage remains. Doc follows the assailants, and determines that they work for a man named “Kar”, who is the one who knows had to build the dissolving potion. Doc finds a clue in Coffern’s apartment that he believed someone was trying to kill him, and that a year ago he went on an expidition with Oliver Wording Bittman, a taxidermist, and Gabe Yuder, to a place near New Zealand called Thunder Island. Doc looks up Bittman, and sees a picture of him with Doc’s father, and a letter from Clark Savage Sr. thanking Bittman for saving his life. Doc instantly promises to do whatever he can for Bittman, and Bittman eventually joins in the hunt for Kar (who Doc now believes is Bittman).

The hunt and chase takes them (Doc, his five aides and Bittman) out of the normal Doc setting of New York City and to the South Pacific and Thunder Island, where a volcanic crated contains prehistoric creatures/dinosaurs, very much like “A Land That Time Forgot”. Kar and his men apparently beat them there, and, after much fighting and running from dinosaurs, Kar turns out to be Bittman, who gets his just desserts by beaing eaten by a tyranosaurus.

Two main things here different from other Doc books: Doc is fooled right to the very end (maybe he was blinded because the man saved his father), and Doc and his gang continue to use firearms, killing lots of bad guys (he is more bent on saving them in later books).

I am attempting to read the entire collection  in the Philip Jose Farmer
(with Win Scott Eckert additions) determined chronological order. For those who do not know, PJF postulated (some think in jest, some in sincerity) that Doc’s adventures (most of them) were real, and assigned a chronological sequence.