The Red Spider stands out in the long list of Dog Savage books for several reasons: 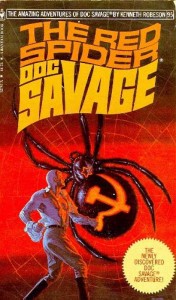 Doc Savage sneaks into Russia, where Monk and Ham have been for several months building their identity and gathering information. They are looking for “the Red Spider”, the one man in the Communist government who Stalin trusts with all of his secrets, and the only man who knows whether Soviet Russia has joined the US as the only power with an atomic bomb. They successfully get the information, but then get in between two different factions of the Soviet government – the one in power, and the one that wants to be by exposing the existence of the Red Spider and turning the rest of the Soviet leadership against Stalin for keeping this secret. Doc, Monk and Ham must escape Russia to get the information back to the United Nations.

The Afterword walks through the Editors and the types of stories they enjoyed: