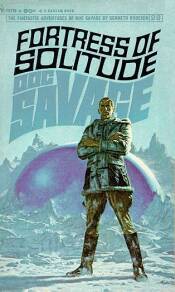 -known; but The Man of Bronze, Doc Savage, has a similar blue domed research facility in the Arctic that predates Superman by 25 years.

In this 23rd book in the Bantam series (other numbering schemes below), John Sunlight (the only Savage nemesis to appear in two novels) stumbles across Doc’s Fortress after escaping from a Russian Siberian labor camp. The Fortress is where Doc Savage would disappear to for weeks, only to return with a new cure or invention. Once John Sunlight figures out how to get into it (by watching the Eskimos who live near it that are trying to protect it for Doc) he finds inside Doc’s labs, and many of the inventions Doc has captured from the villains around the world.

John Sunlight uses some of these inventions to get revenge on the man (now a Russian dignitary in New York City) who sent him to the prison camp, then proceeds to contact warring governments, offering to demonstrate and sell for millions many of the more dangerous and lethal inventions. Doc Savage sees the fate of the Russian dignitary in the papers, and, upon investigating, determines that devices from his Fortress were involved. Sunlight’s men try to kidnap Doc, but he avoids capture and begins to piece together what has happened. Doc and his team journey to the Arctic (Doc and Monk masquerading as the bodyguards for one of the princes from one of the possible weapon buying warring governments, the rest following behind) for a final showdown with John Sunlight at the Fortress