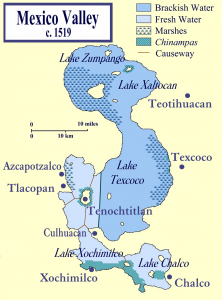 Long ago, most of the area around what is now Mexico City was a lake called Lake Texcoco. The people who lived in Xochimilco started planting a certain type of tree in four corners, then burying posts to form an outline. They then put refuse and other items in this newly made rectangle, until there was enough solidity to plant grass.  In other words, the people of Xochimilco made islands called “chinampas“. The map to the right (from Wikipedia) shows the area of what is now Mexico City from the 1500s.  Near the bottom of the map is show the area around Xochimilco and the parts that were converted from the lake using this system of chinampas.

Its history and the canals made Xochimilco a World Heritage site in 1987.

Over time most of Lake Texcoco dried up. These days all that remains are a series of canals. But these canals come alive with color and sound on the weekends as multi-colored boats take tourists and locals along the canals. The gondola-like boats are called “trajineras“. Some carry tourists, other mariachis and still others float by selling corn or other food.  We did not see one selling beer, tequila or mezcal, but our own tarjinera was well supplied in that regard. For those interested, here is the link to the tour we took. Our guide Juan Carlos was a knowledgeable and hospitable host! 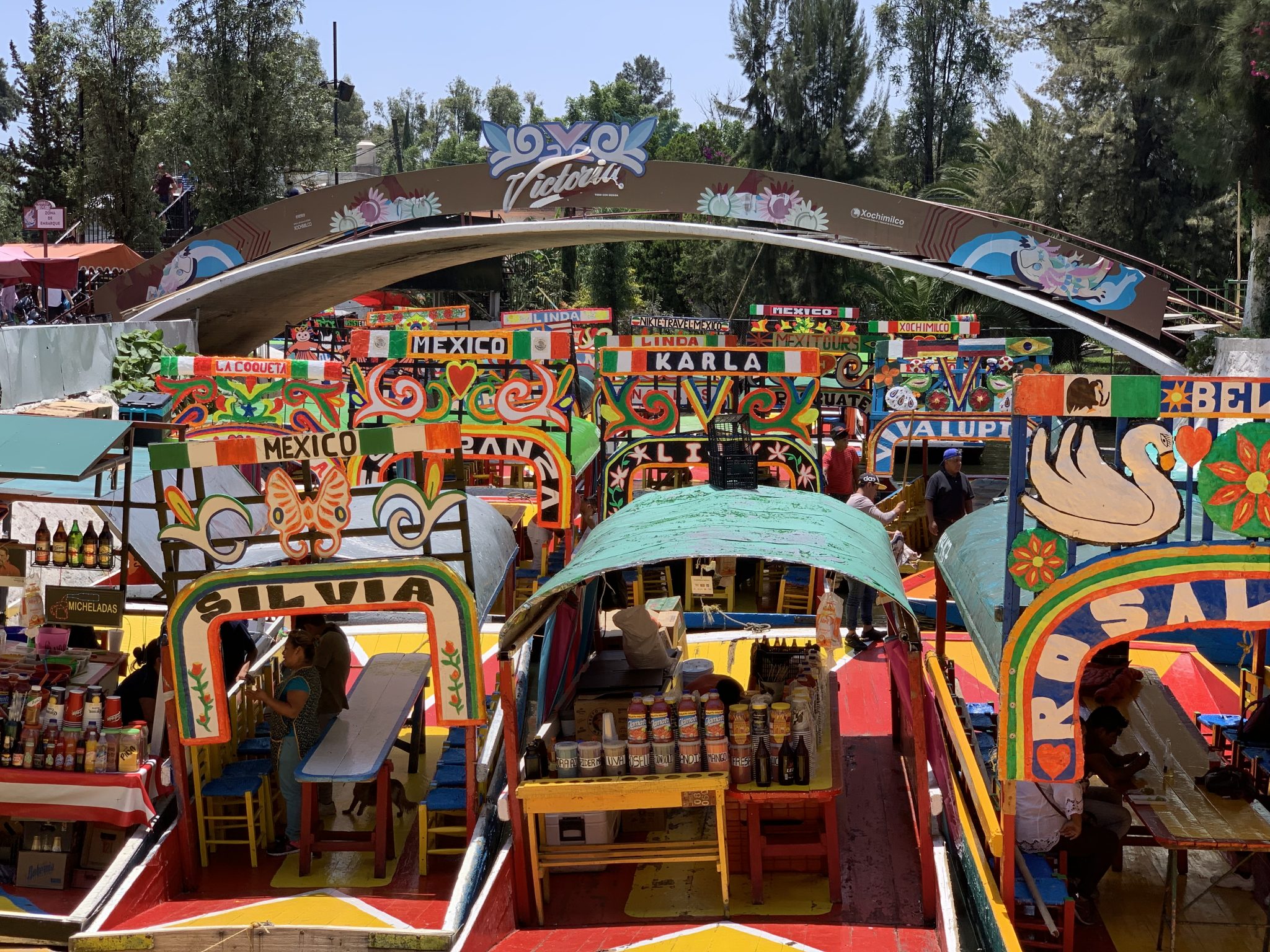 Our boat was named Frida.  We had just come from touring the Museo Dolores Omelo (which is an outstanding museum with a large collection of Diego Rivera works, and has beautiful grounds) and there was an exhibit of photographs of Frida Kahlo. So the boat name was very appropriate. 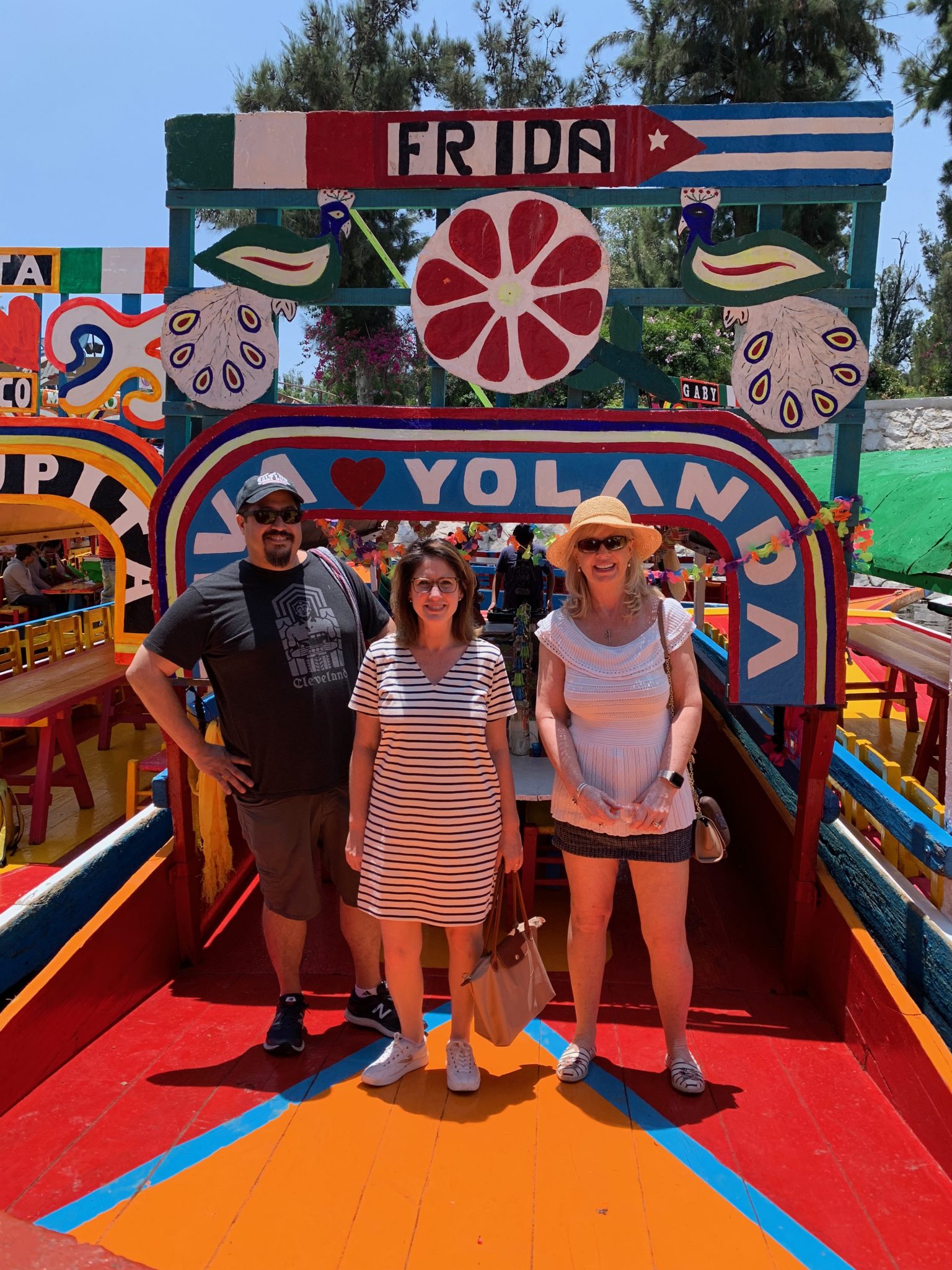 Some boats were even more appropriately named. 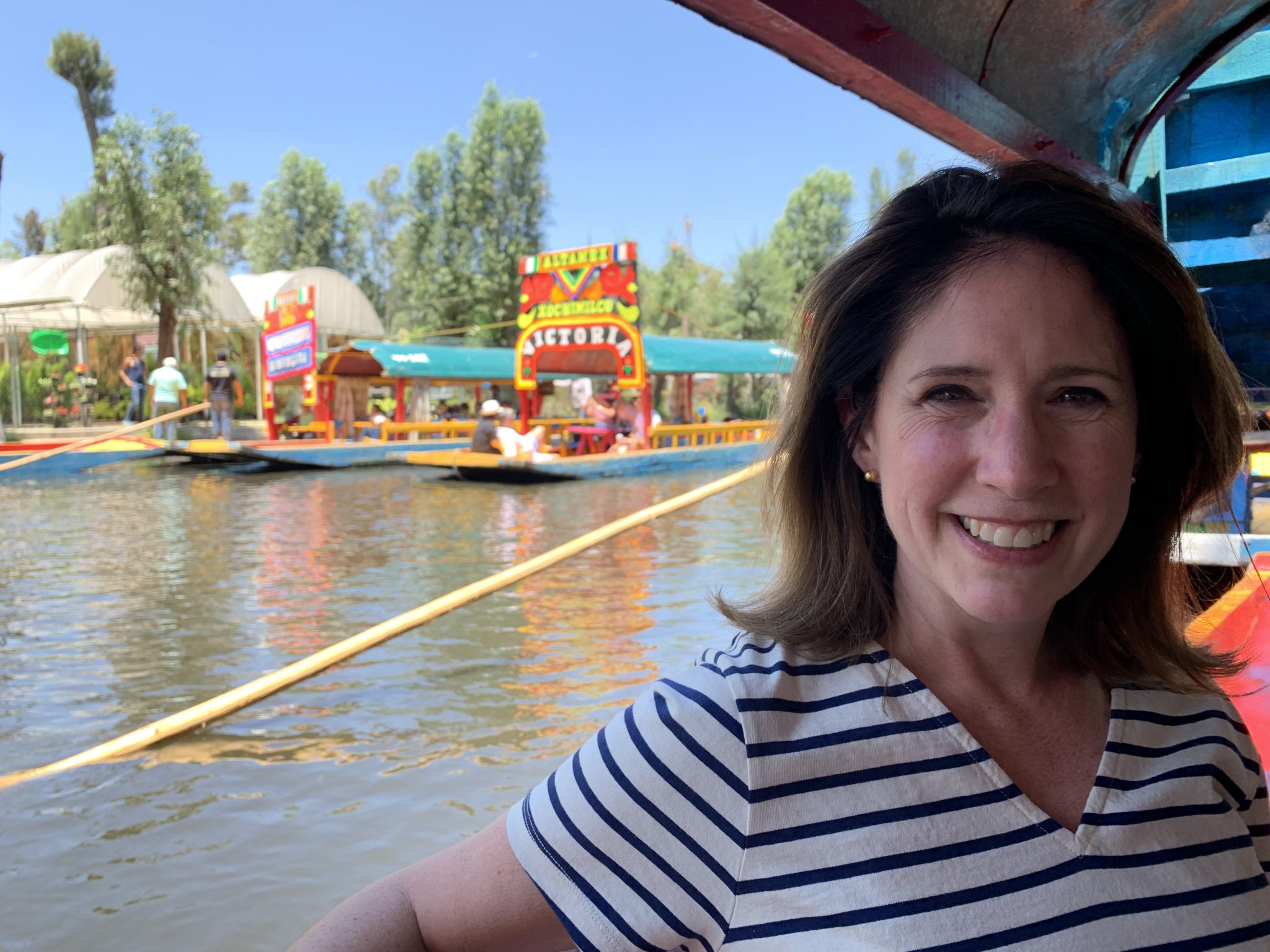 There was a traffic jam getting into and out of the pier where we boarded and disembarked from the boat. But on the river we usually went as fast as the gentleman poling our boat wanted to take us. Each trajineras had its own poleman, and from what I could learn from our tour guide Juan Carlos, there were no rules – each boat and poleman was on his own though they did help push each other along with their feet. There were some traffic jams and the boats glided very close to one another. But this allowed for quick conversations with others in their boats – or at a minimum, a quick toast! 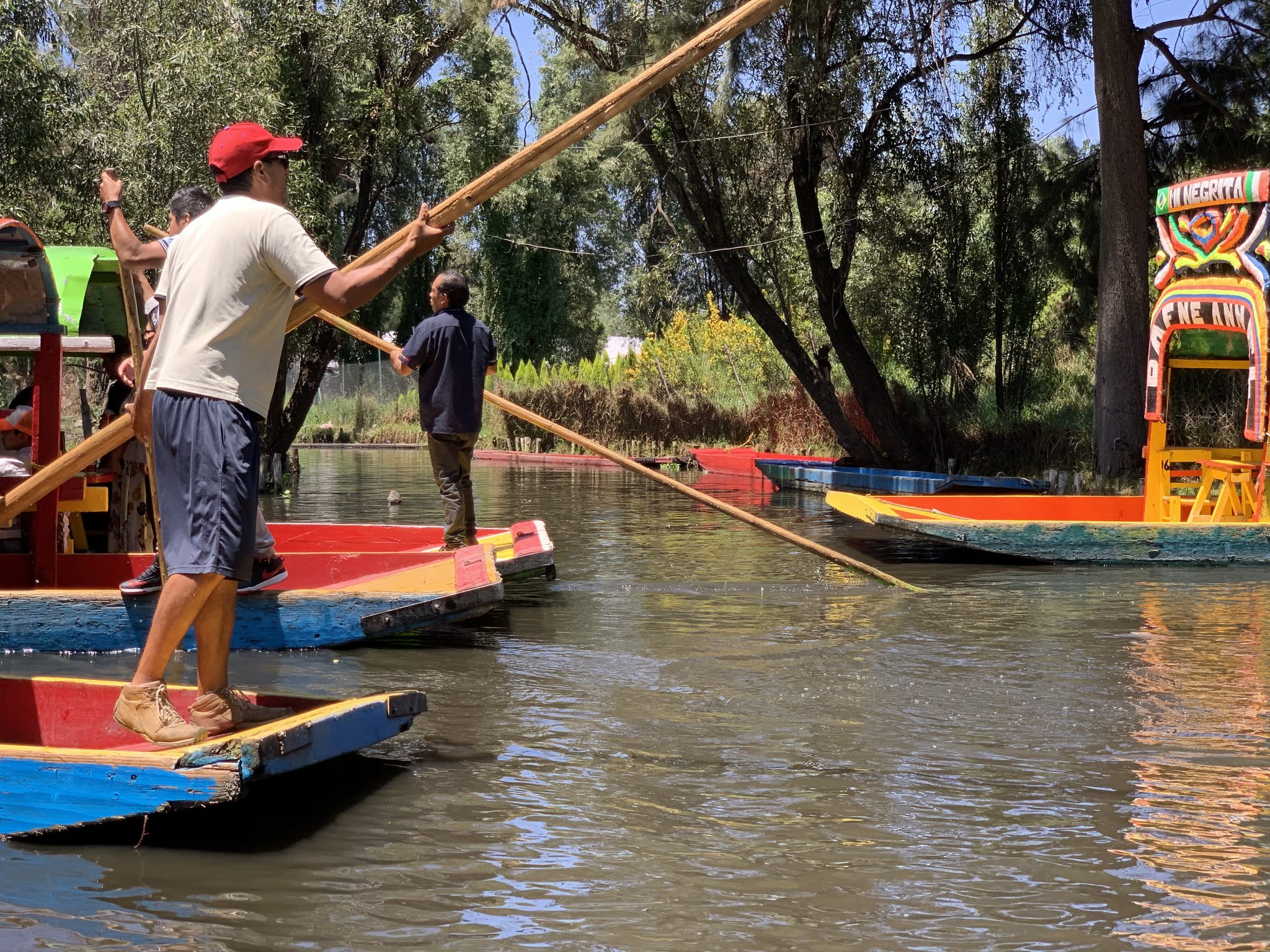 In the video below you can see how close the boats are on a crowded Sunday, as well as the wonderfully set table for our tour. Near the end of the video there is a jarring as our boat smacked another.

On our tour we were served a lunch of chicken mole, tostadas and other courses, and provided with beer, eleven flavors of mezcal and micheladas from our tour guide Juan Carlos’ own recipe. Mariachis would go by, calling out to the passing boats to ask who wanted a song (their advertisement of 150 pesos per cancion (song) can be see in some of the photos and videos). There was even a xylophone on one tarjinera.

As can be heard in the videos below, there was no need to pay for music as there was music all around.

Our tour guide and host Juan Carlos was an English teacher at a local school during the weekday. His tour of the museum before the boats was very informative, and he answered all of our questions. He and his wife and his nephew were outstanding hosts. 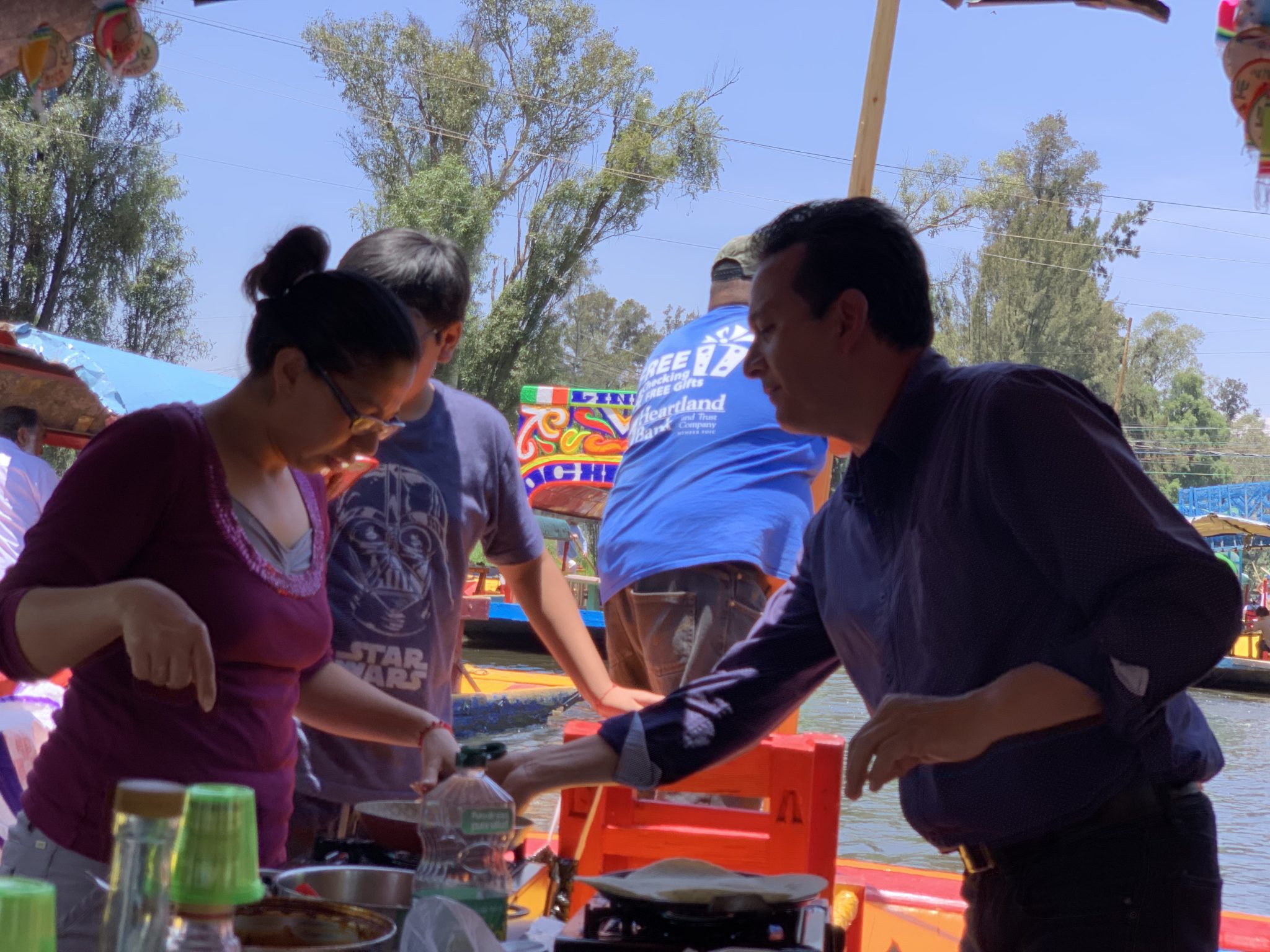 We had wanted to go to the Isla de las Muñecas, or the Island of the Dolls but Juan Carlos told us that it would take a long time to get there. Some of the canals were low so the boat might have to be portered. He did point out one of the canals where is was difficult to get the boat through. 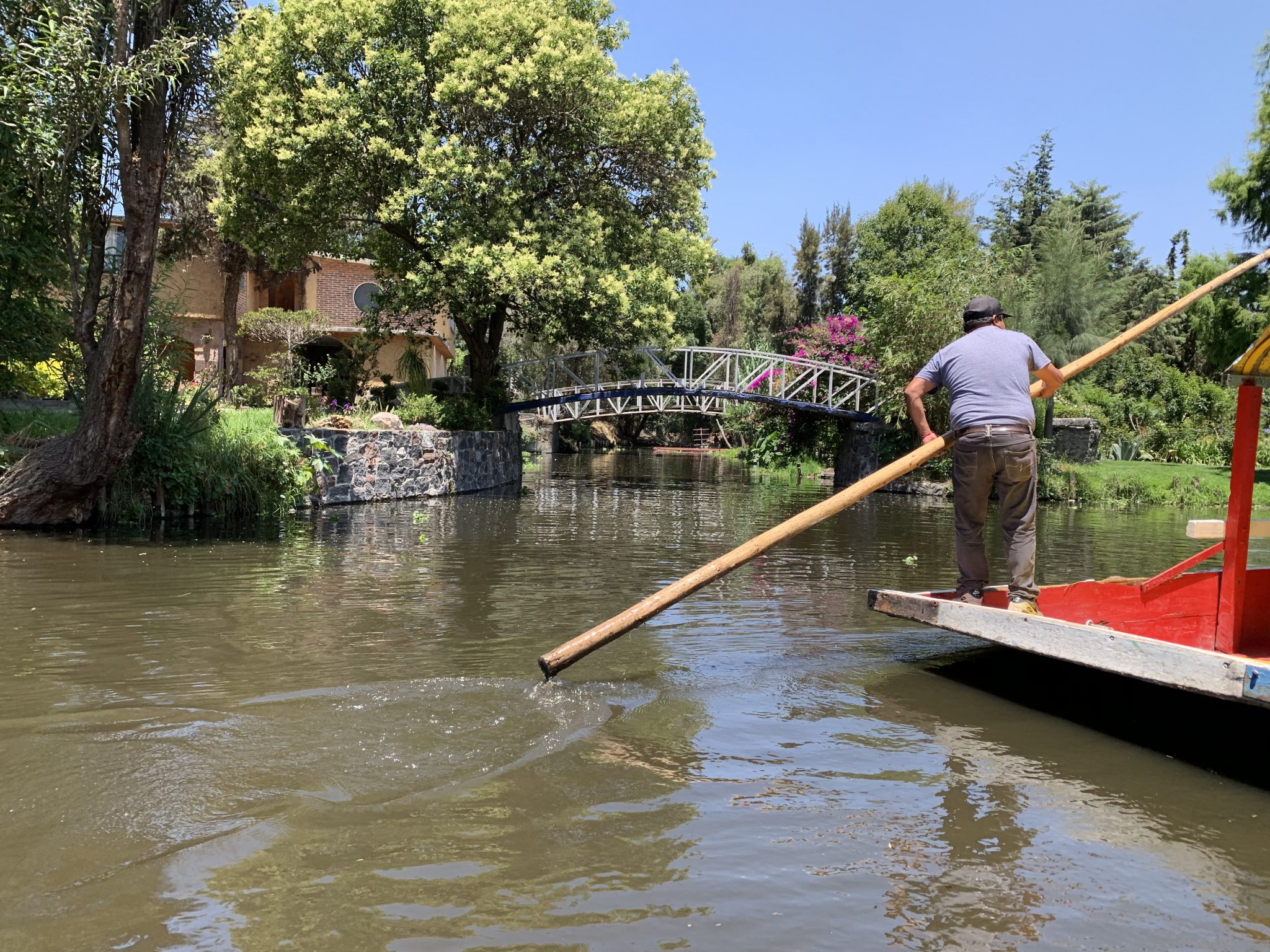 We continued to talk about this excursion long after it was over. The colors, the boats, the people on our tarjinera, the music and other sounds were just fantastic. 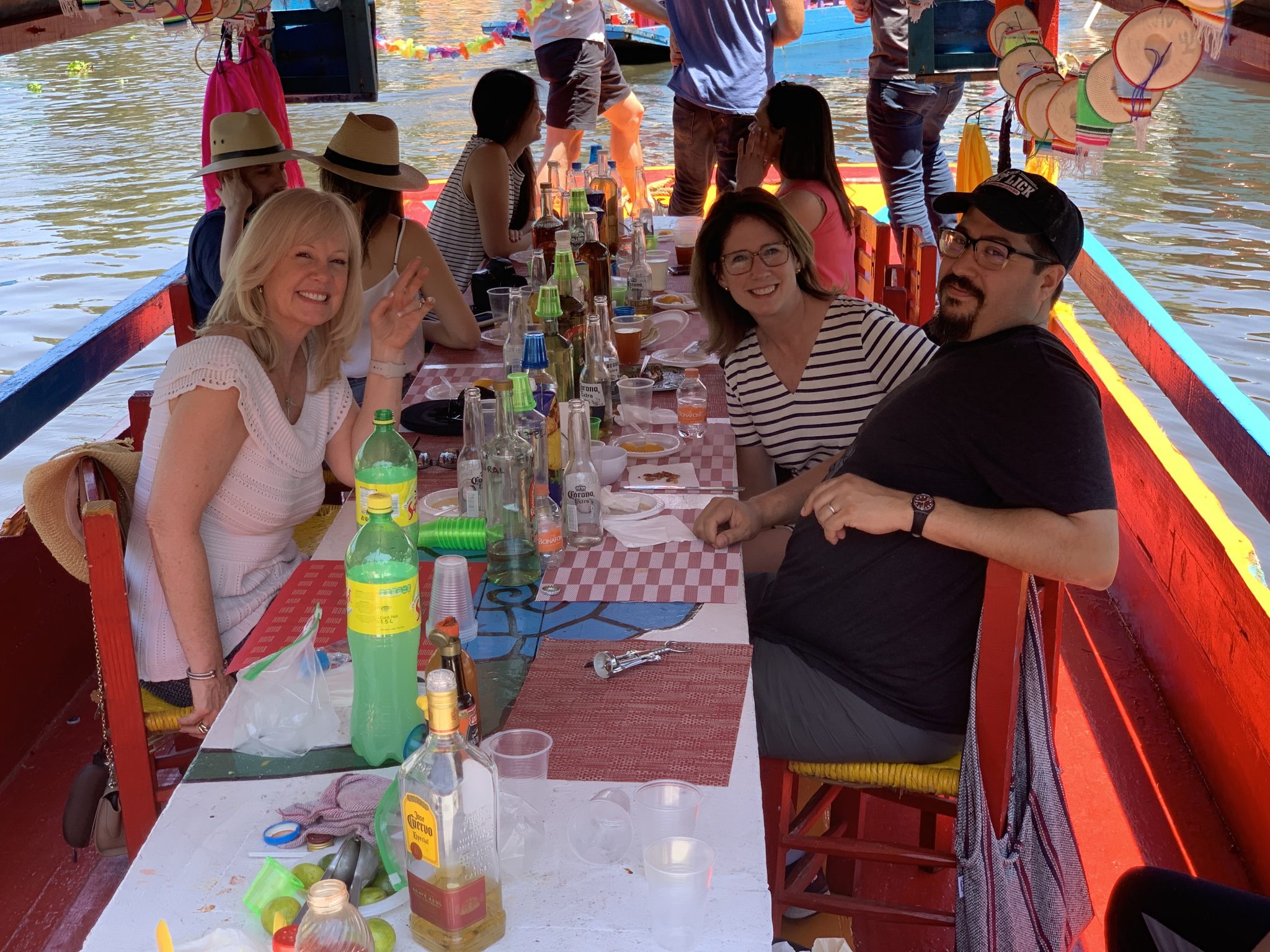