During the part of our 30th anniversary tour that included Dublin, Ireland and Belfast, Northern Ireland, we searched many pubs for the best fish and chips and freshly poured Guinness (and other Irish beers). Here is a list of our favorites, which also includes a visit to the Guinness Storehouse in Dublin. To skip to a section on a particular pub of Dublin or Belfast, click on the links below.

Kelly’s Cellars is one of the oldest pubs in Belfast (established 1720 as the sign on the joint states!). It was a bit difficult to find as there was construction and some road closures between where the bus let us off and Kelly’s. But it was certainly worth the effort. 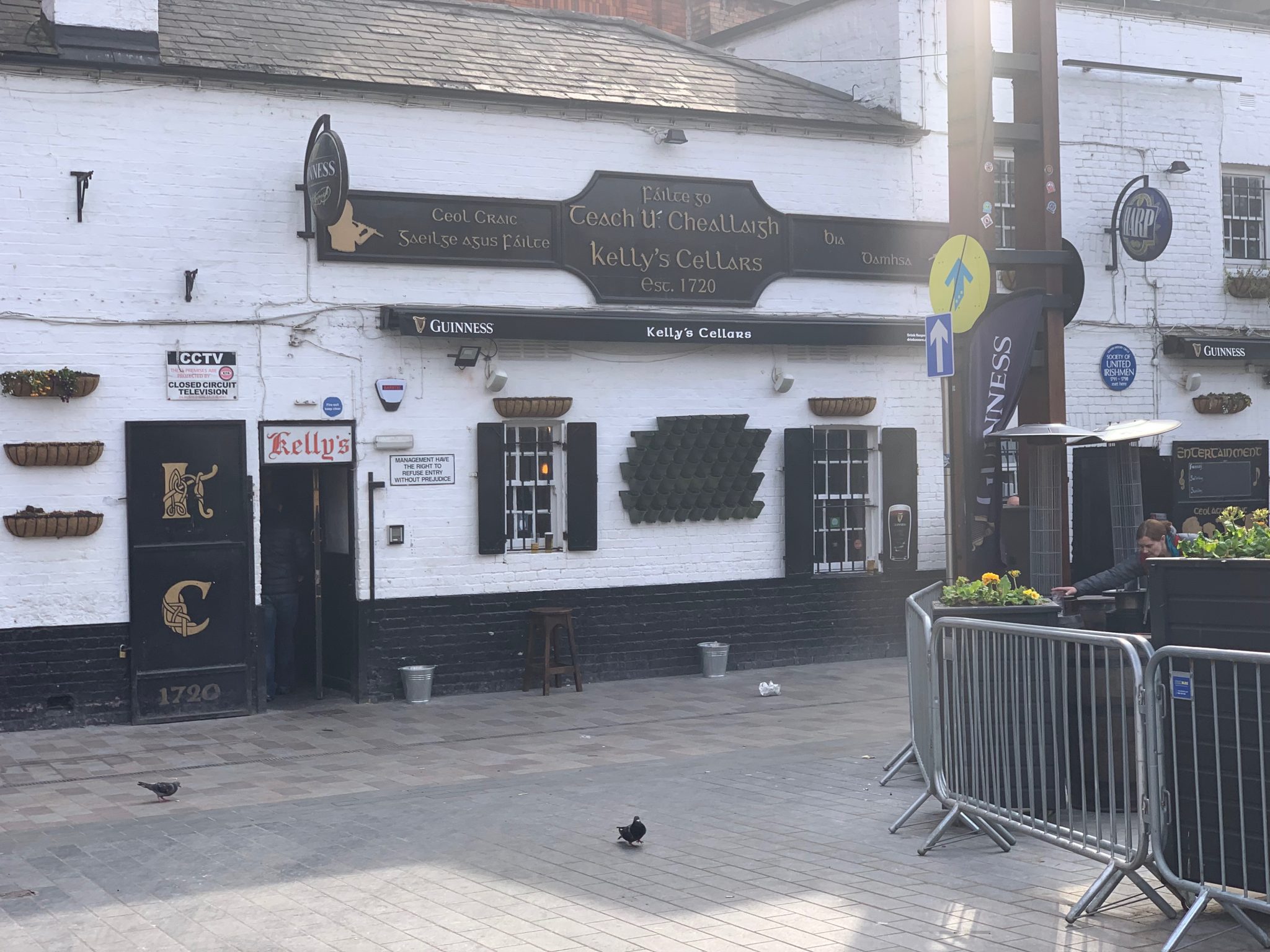 We initially grab our beers and sat outside as there wasn’t a seat inside to be found. But it was (surprise) cold and windy, so we may our way inside to sit by the fire and listen to the traditional music. 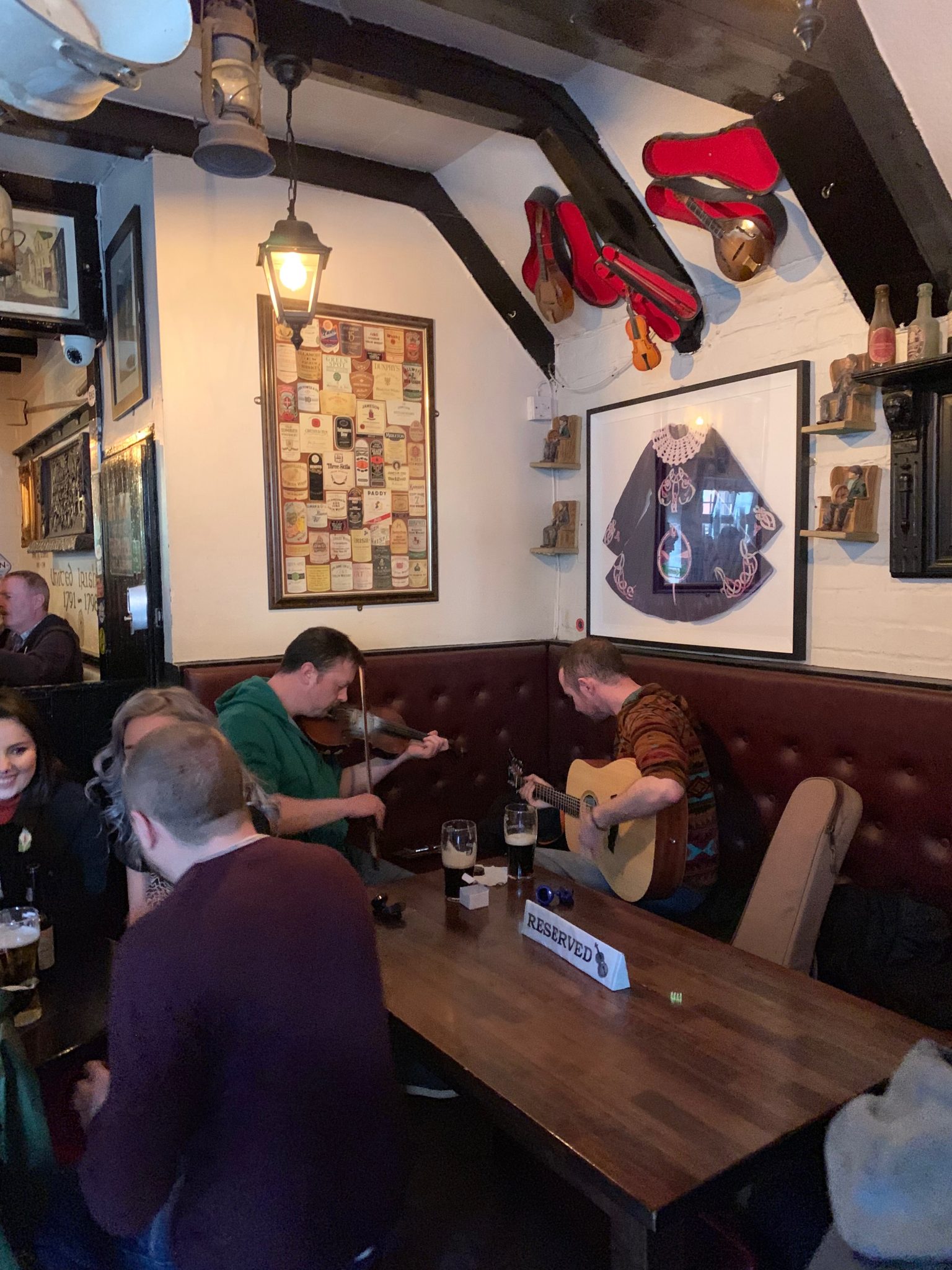 My lovely wife had a Guinness (and I helped, as I did everywhere we went!) while I had a pint of Harp. The tour guide on our bus had told me this was one of the few places that had Harp on tap. 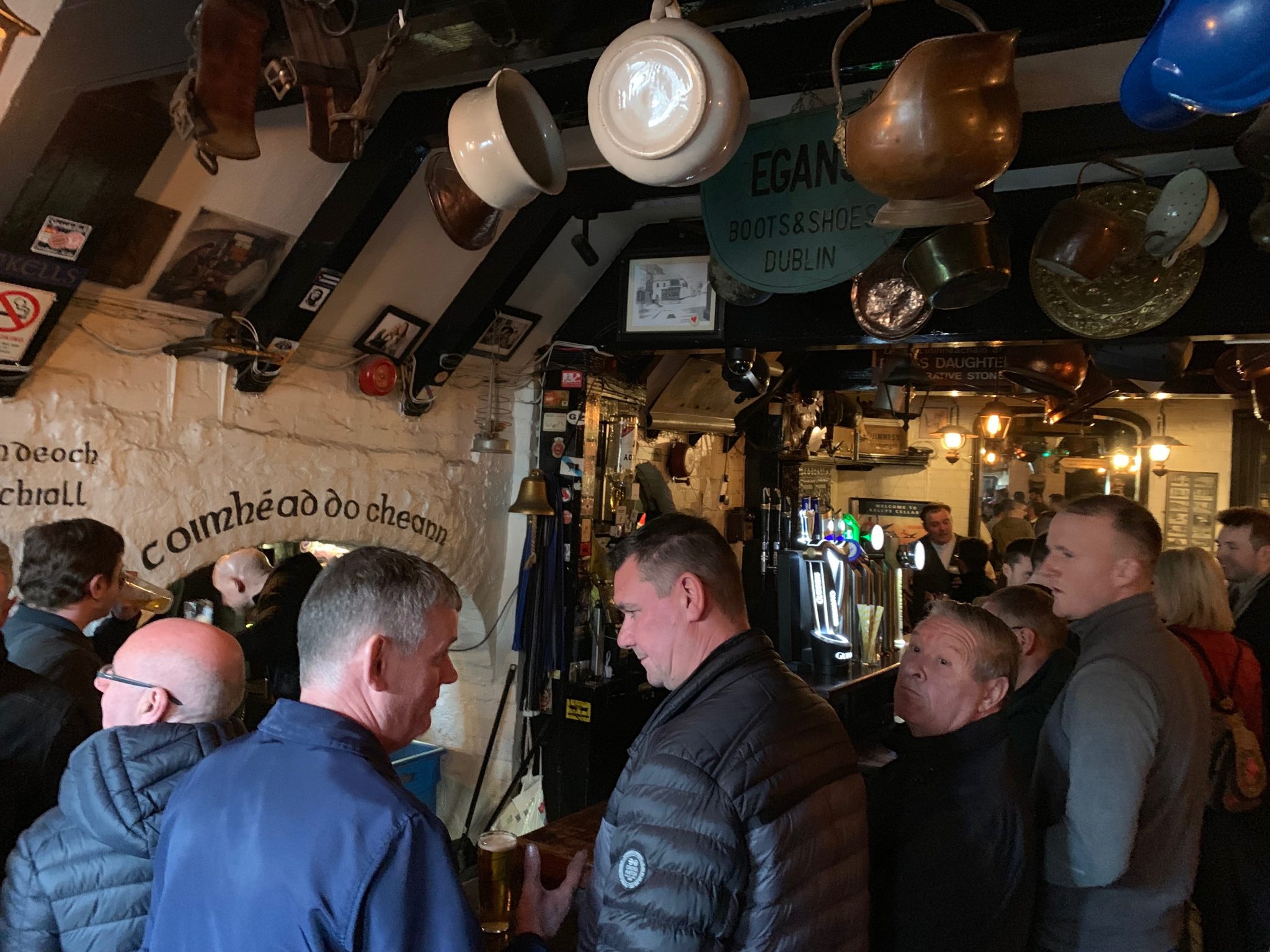 This was,  unfortunately, the only pub we had a chance to visit in Belfast; the rest of the pubs listed here are in Dublin. 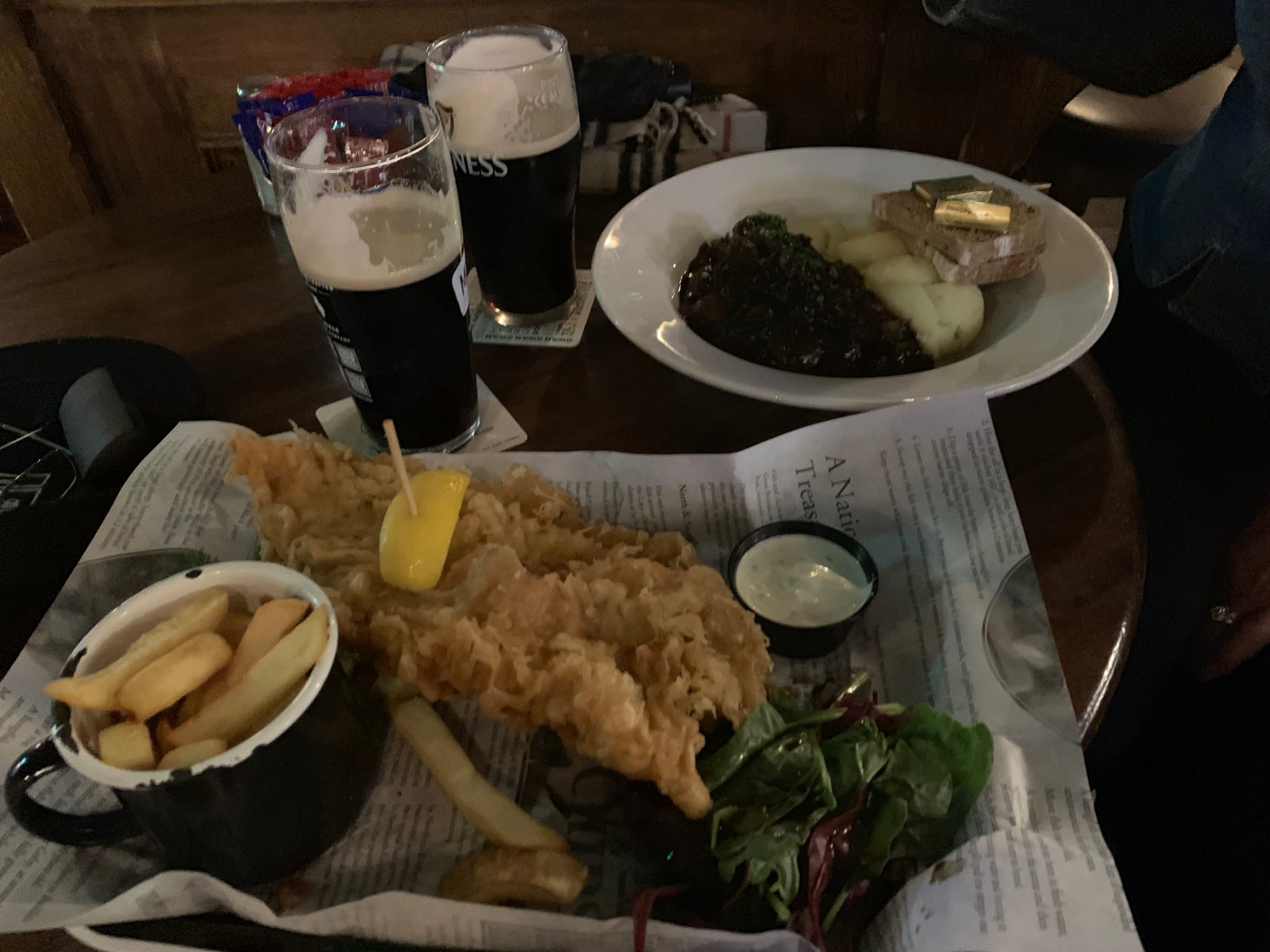 After a day long day of walking around Dublin,  we were starving. The place we were targeting was closed for some reason (it was a Monday), and luckily we just happened upon Darkey Kelly’s. This was the best fish and chips we had on our trip, and it wasn’t because I was hungry (as my wife says, I’m always hungry!). While my wife had a Guinness, I tried at the server’s recommendation a Jim’s Stout from McGargles, which was quite good. This pub was quite busy for a Monday with no empty tables and good music.

For the most part we avoided the Temple Bar area, as we were told (and observed) that it was quite touristy and a bit higher priced. But we’re glad we made an exception for the Foggy Dew. This pub had an amazing number of framed records and other music paraphernalia hanging on the walls. Our bus tour guide told us that this pub was frequented by Bono from U2. 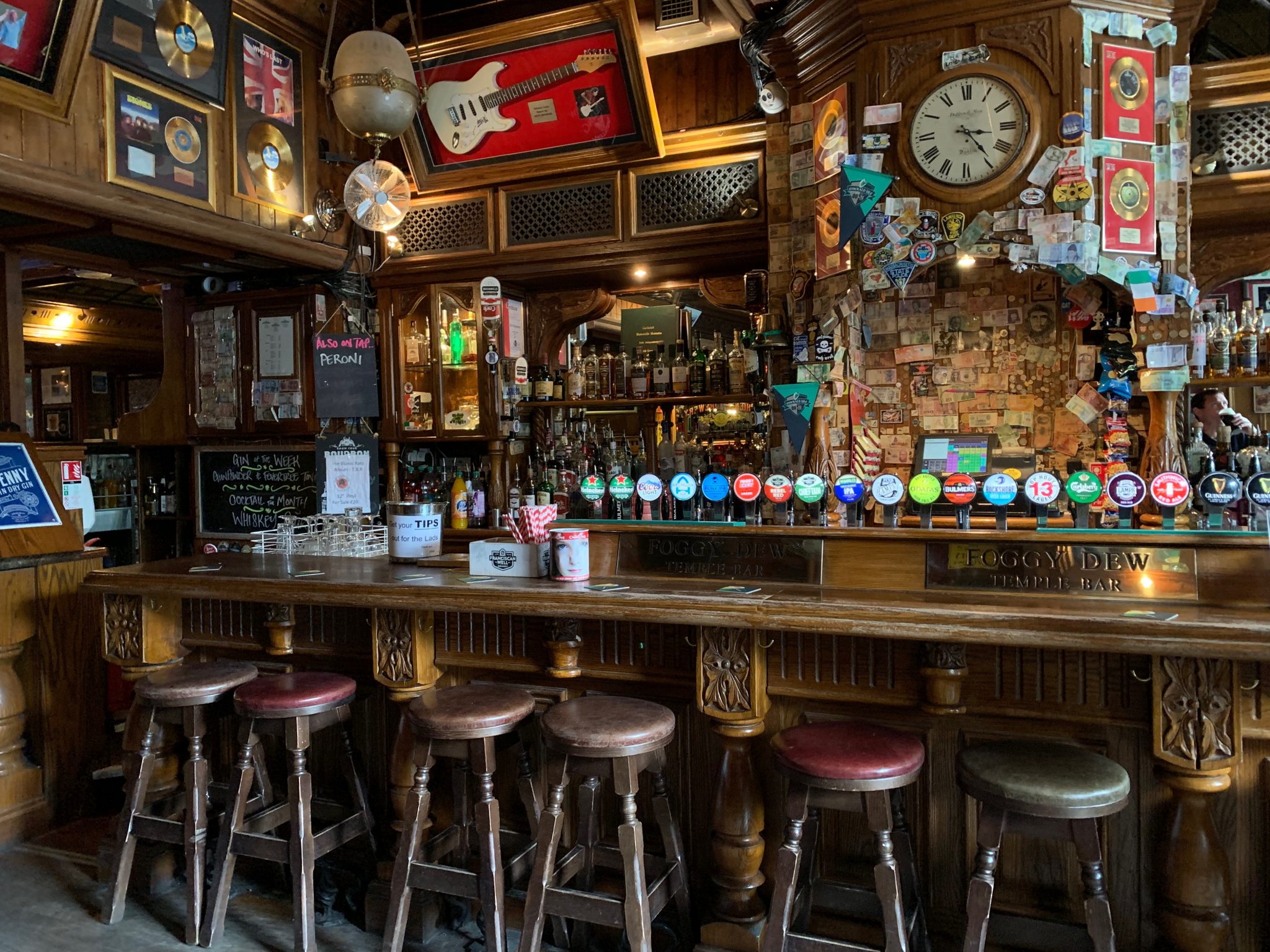 I tried another beer from McGargles brewery call Francis’ Big Bangin’ IPA. The bartendress made a point of telling me it was 7% ABV; not many of the beers here have high alcohol percentages, different from the craft beer trends in the states. But that beer did make me start seeing things in their mirror. 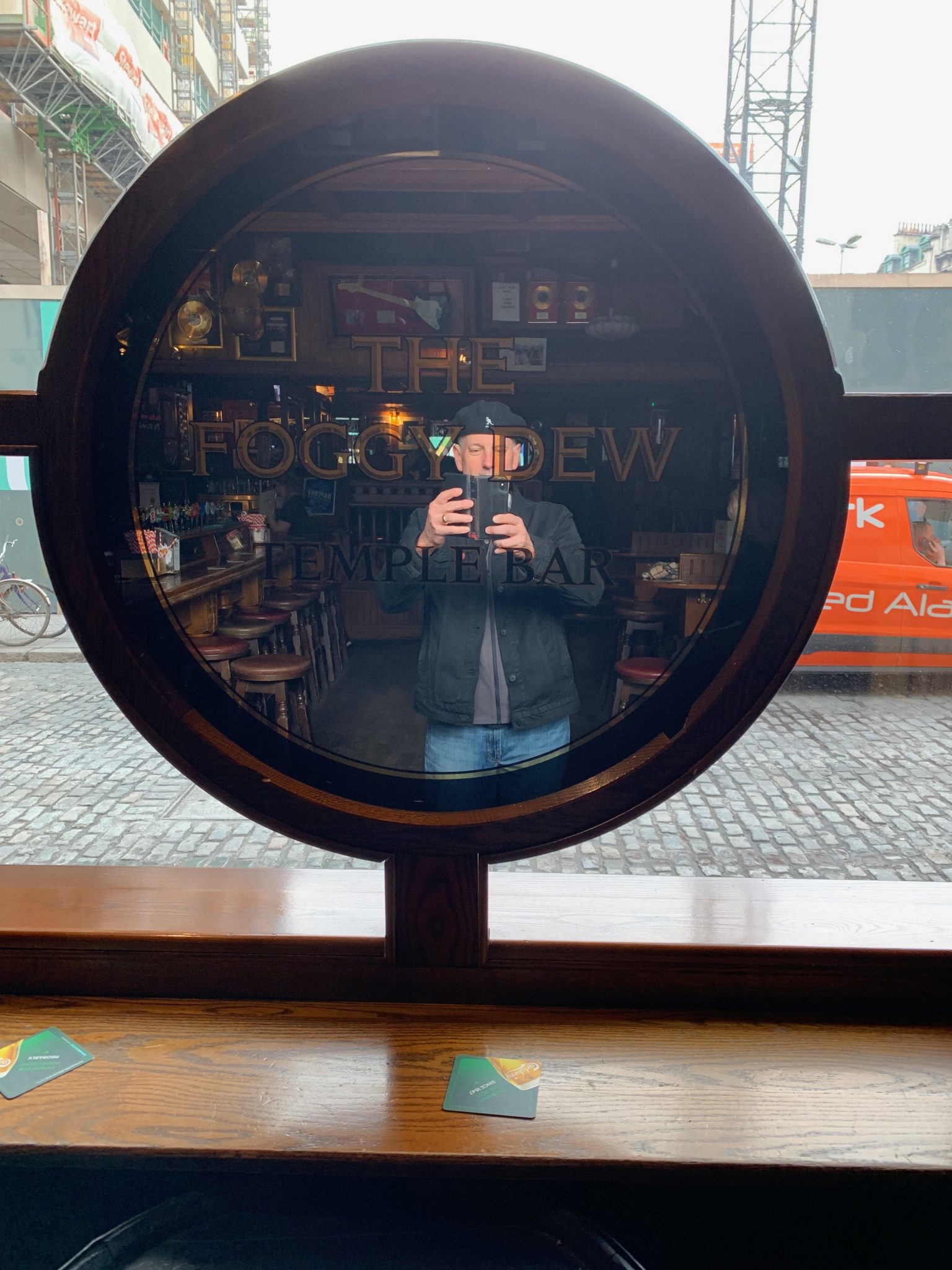 We did not see Bono, but the snacks, beer and decorations were excellent. 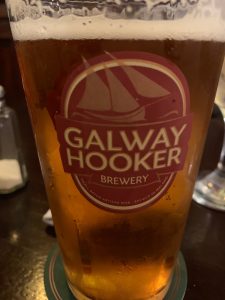 On our last day in Dublin,  while walking to the Dublin Writer’s Museum, we ducked in for lunch at a place off the main thoroughfare called Madigan’s. It was there I had a Galway Hooker – it’s a beer, of course, named (I assumed) after a rugby player, not an Irish lass.

The fish and chips was huge. It was…er…the size of a fish!

Most of all the people at Madigan’s were friendly, joking and laughing during quite a busy lunchtime crowd. 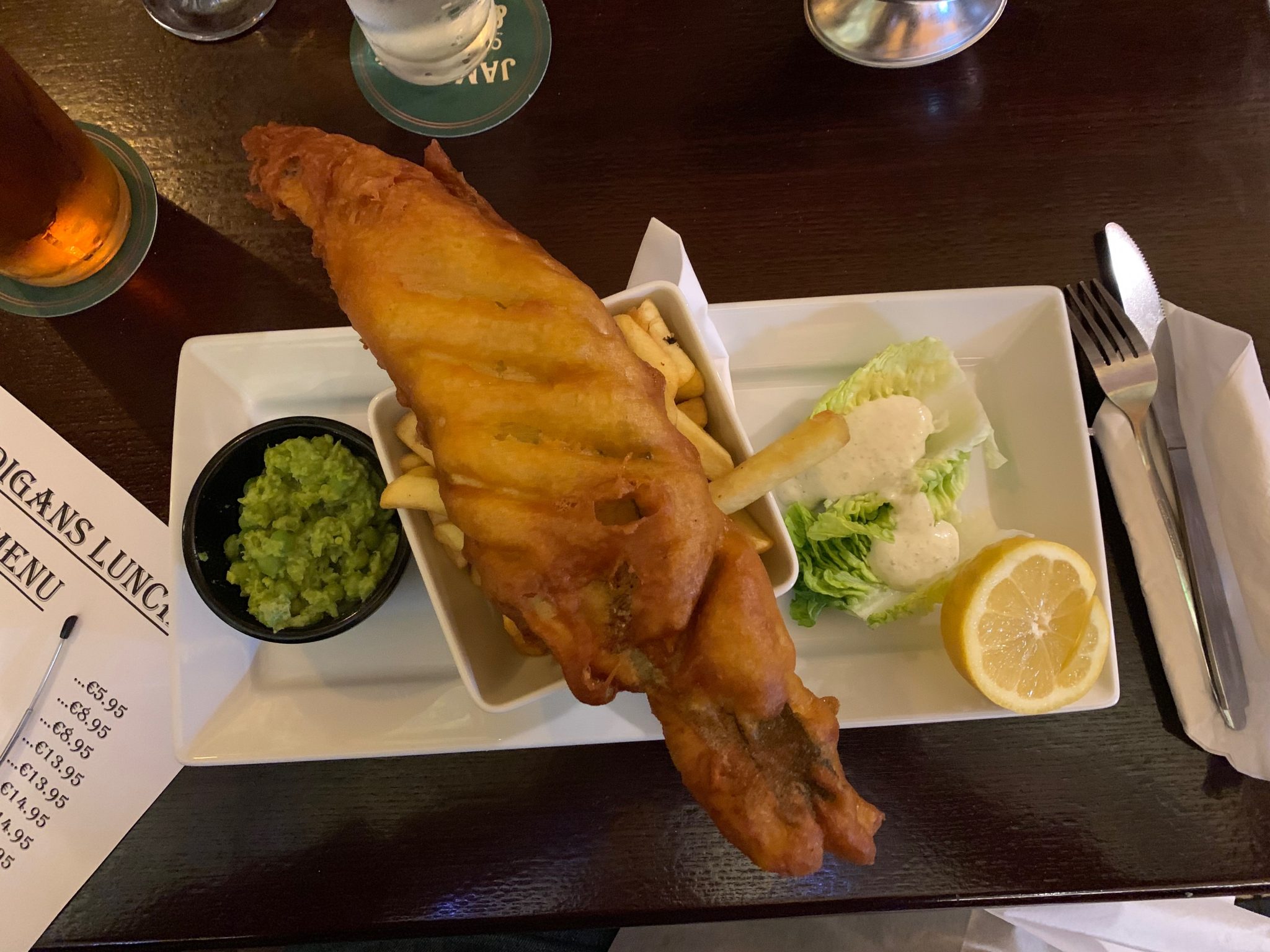 We found Open Gate Brewery from a couple we shared a table with at the Guinness Storehouse. They said they had accidentally made a reservation there when they had meant to make one at the Storehouse. A reservation at a brewery?

We walked around the corner to Open Gate after visiting the Guinness Storehouse. There was a “guard” outside who asked if we had reservations. I replied “no, but it is our 30th anniversary”  (yes, I played that card!). He let us in to what turned out to be the Guinness experimental brewery, which is apparently only open Thursday through Sunday. 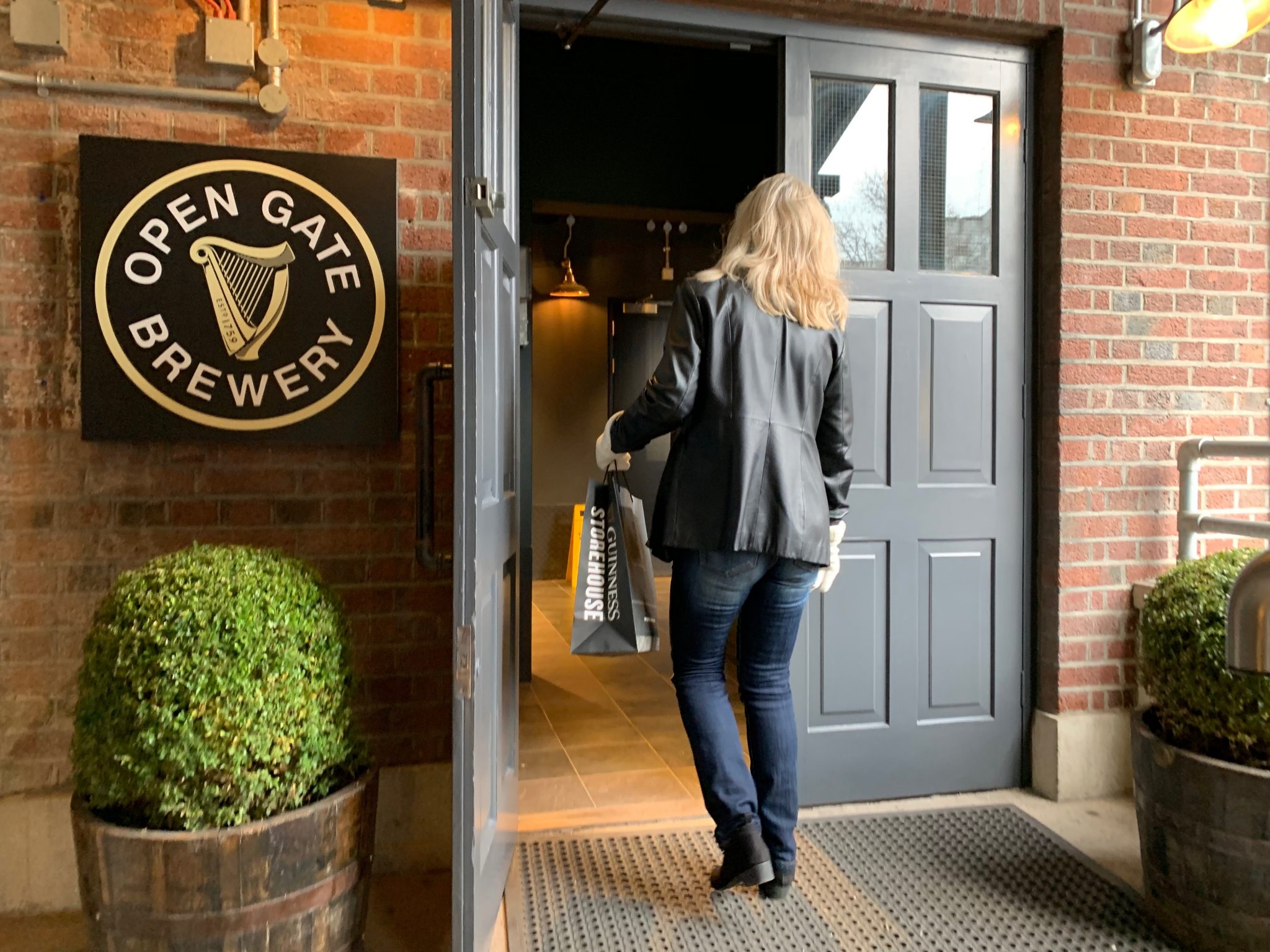 Below is that day’s beer selection list. The paragraph at the top says:

We’ve had a dedicated experimental brewery at St. James Gate in Dublin since 1904. Our taproom is open for you to discover and taste our small batch of rotational beers. Anything we can dream up, we get to brew up. Our beer specialists are on hand to help you choose from our ever-changing line up. 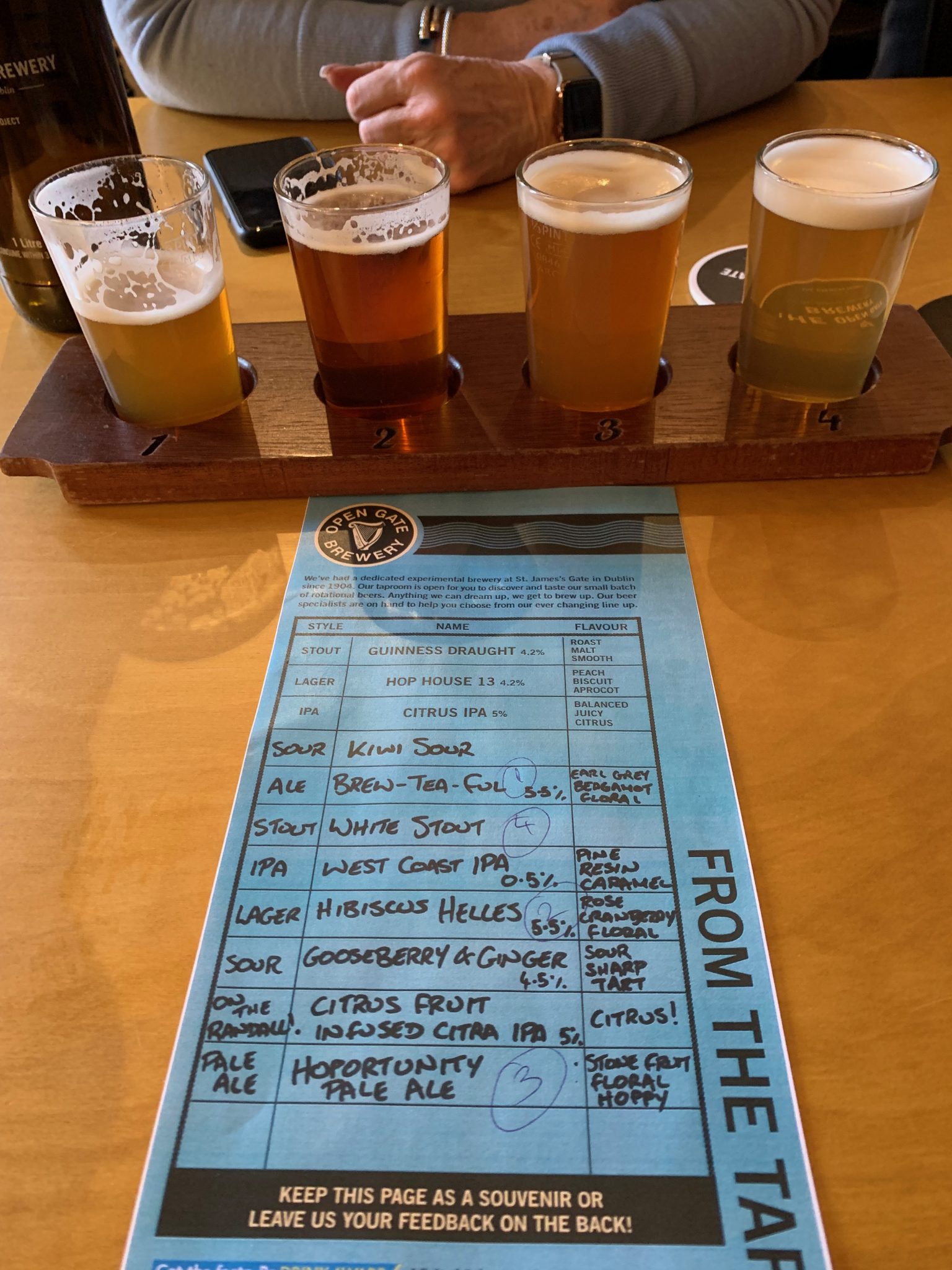 Though this article is mostly about the pubs we visited, I have to mention the seven-story monstrosity that is the Guinness Storehouse. Our first day in Dublin we booked one of the hop-on/hop-off buses, and booked tickets to get into the Guinness Storehouse in the afternoon. Booking tickets in advanced (even the day of) is a must, as the lines do get long. 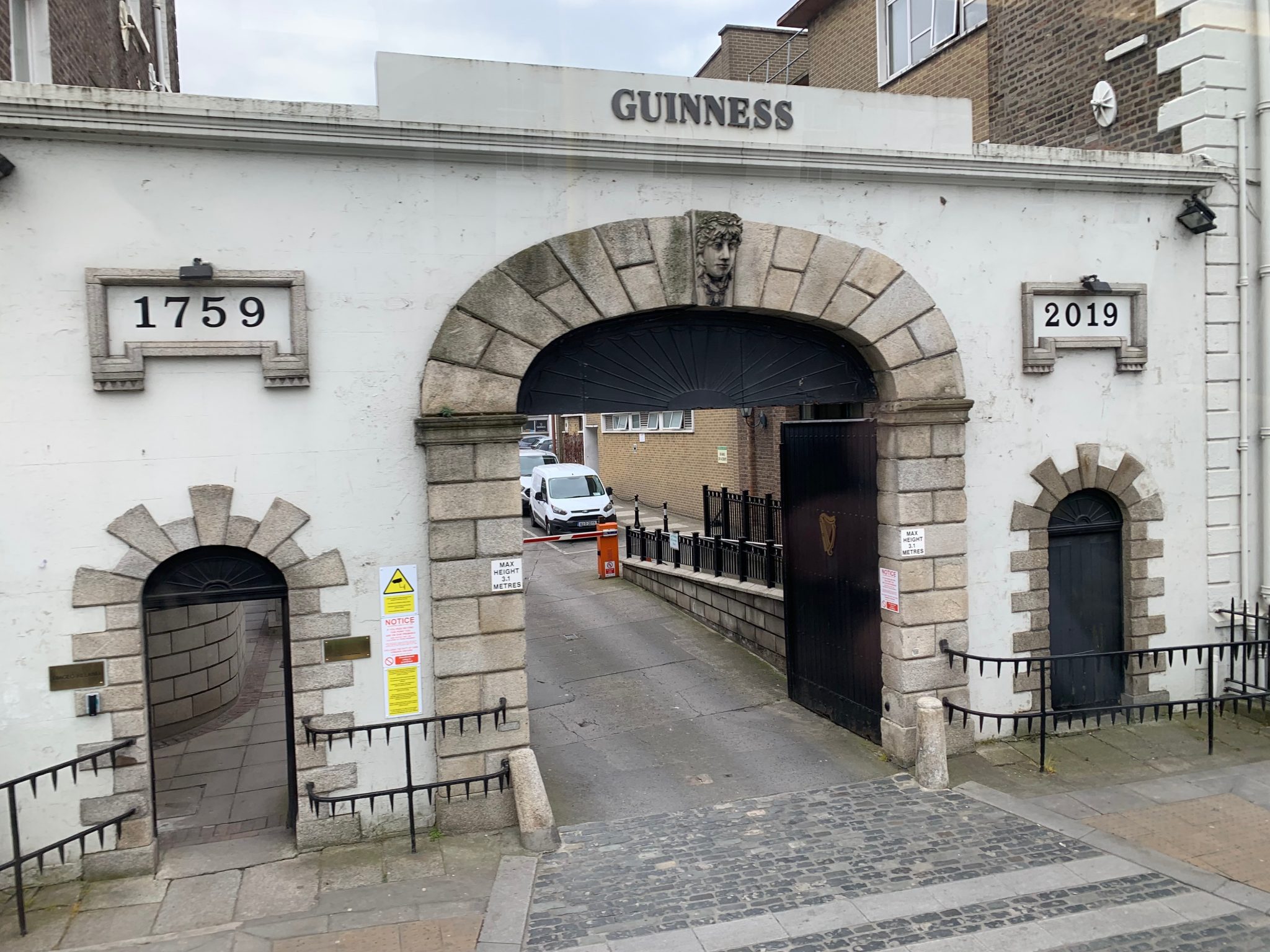 In addition to the retail part, the first few floors are dedicated to telling the history of Guinness. There is a section dedicated to how it is brewed, how the barrels were made and the ships that transported the Black Stuff (cooperage and transport). 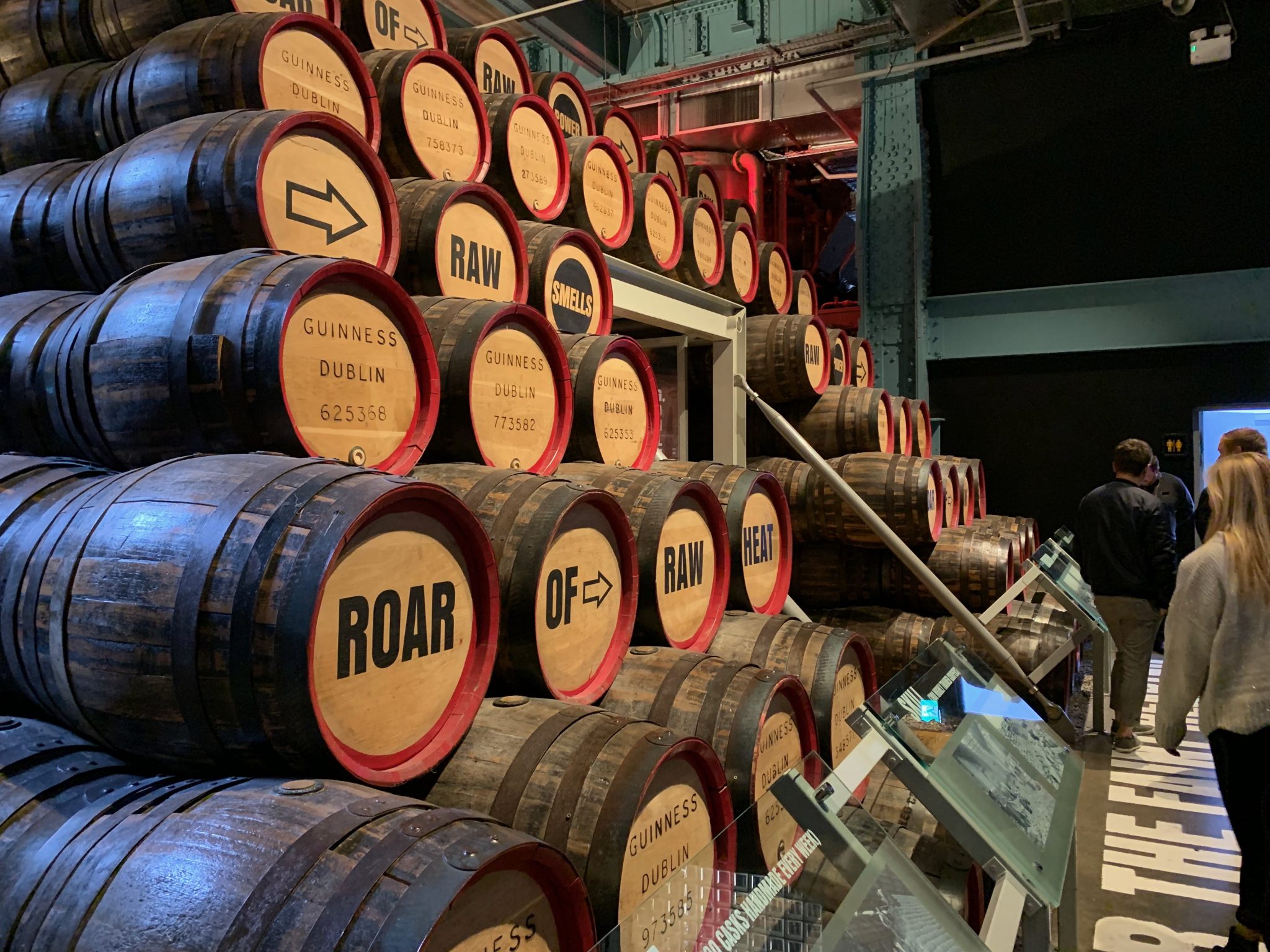 On the second floor is the tasting room, where they give you a wee glass, just to whet your appetite. 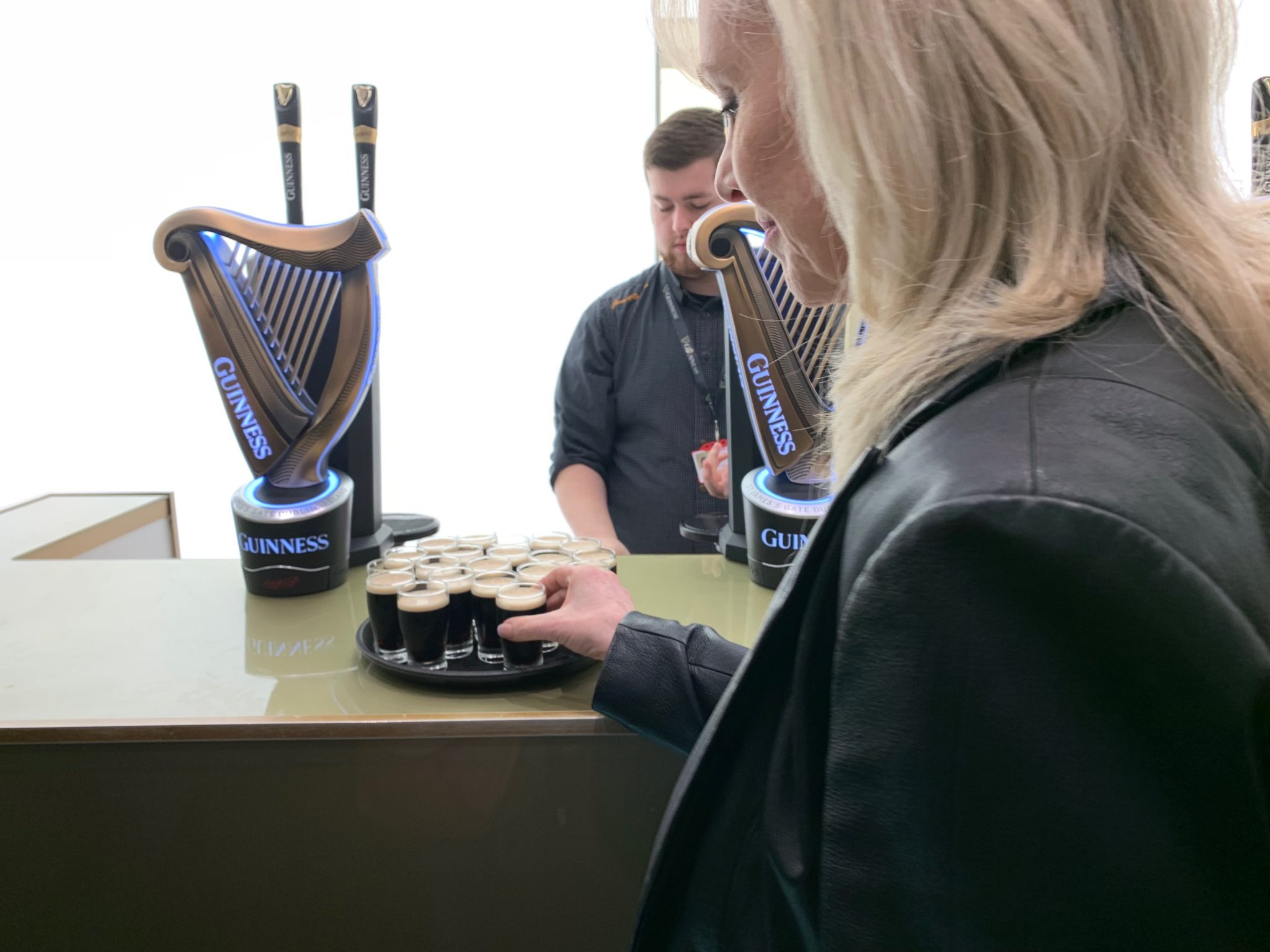 The third floor is dedicated to all of the marketing and advertising that Guinness has used over the years. Apparently that included a fish on a bike.

By this time we were more than thirsty, so we shot up to the fifth floor (called the food and drink floor) where the bars and restaurants are, to get our complimentary pint (or two).  I tried the West Indies Porter which was so good I bought a few bottles to take back to the hotel room. 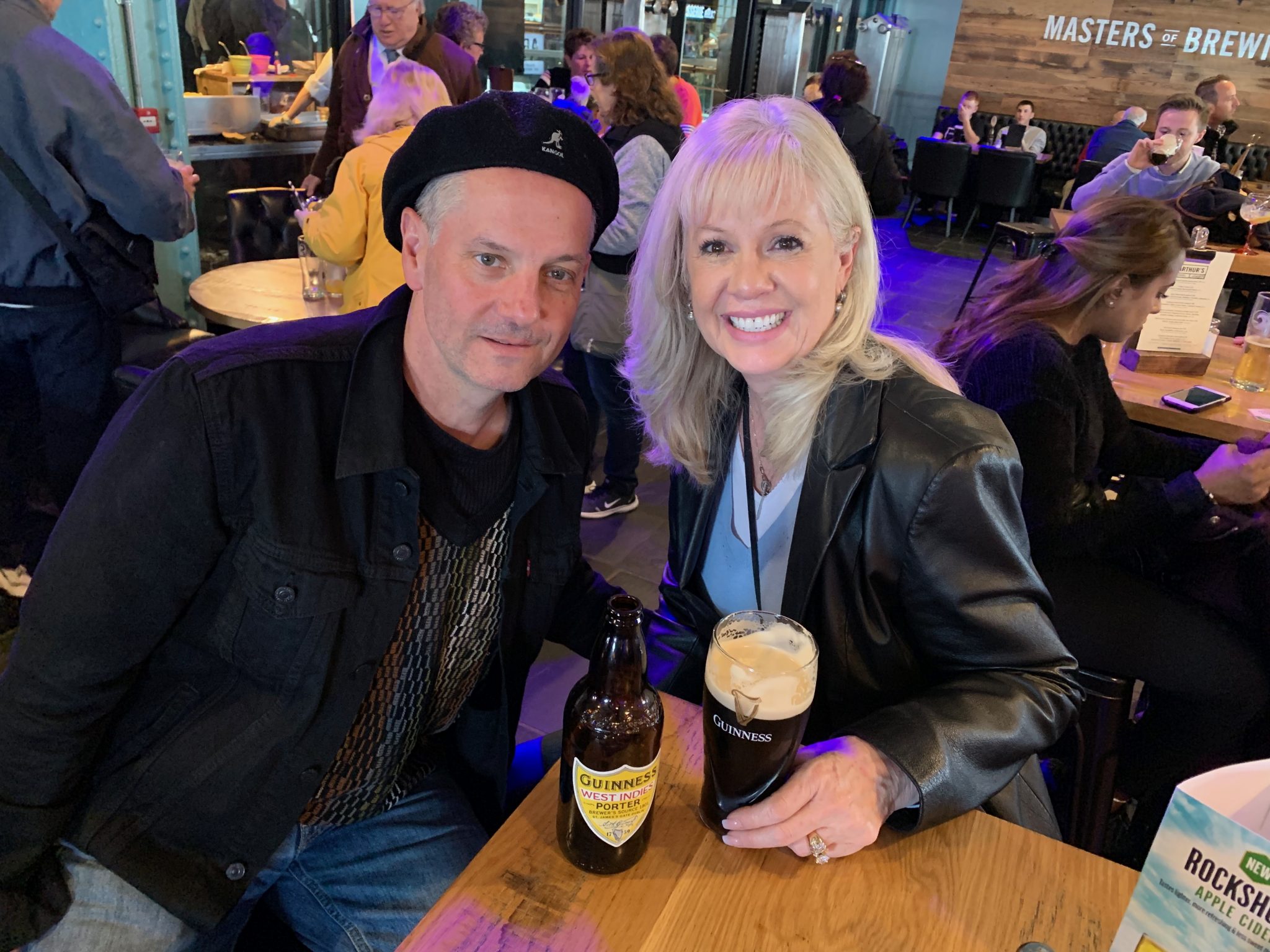 The couple that shared their table with us in this bar showed us pictures of their faces in the head of a Guinness. In our haste to get to that promised pint, we’d walked right past this on a lower floor. We walked back down,  got our photo taken and voila – a machine traced our faces in the foam. 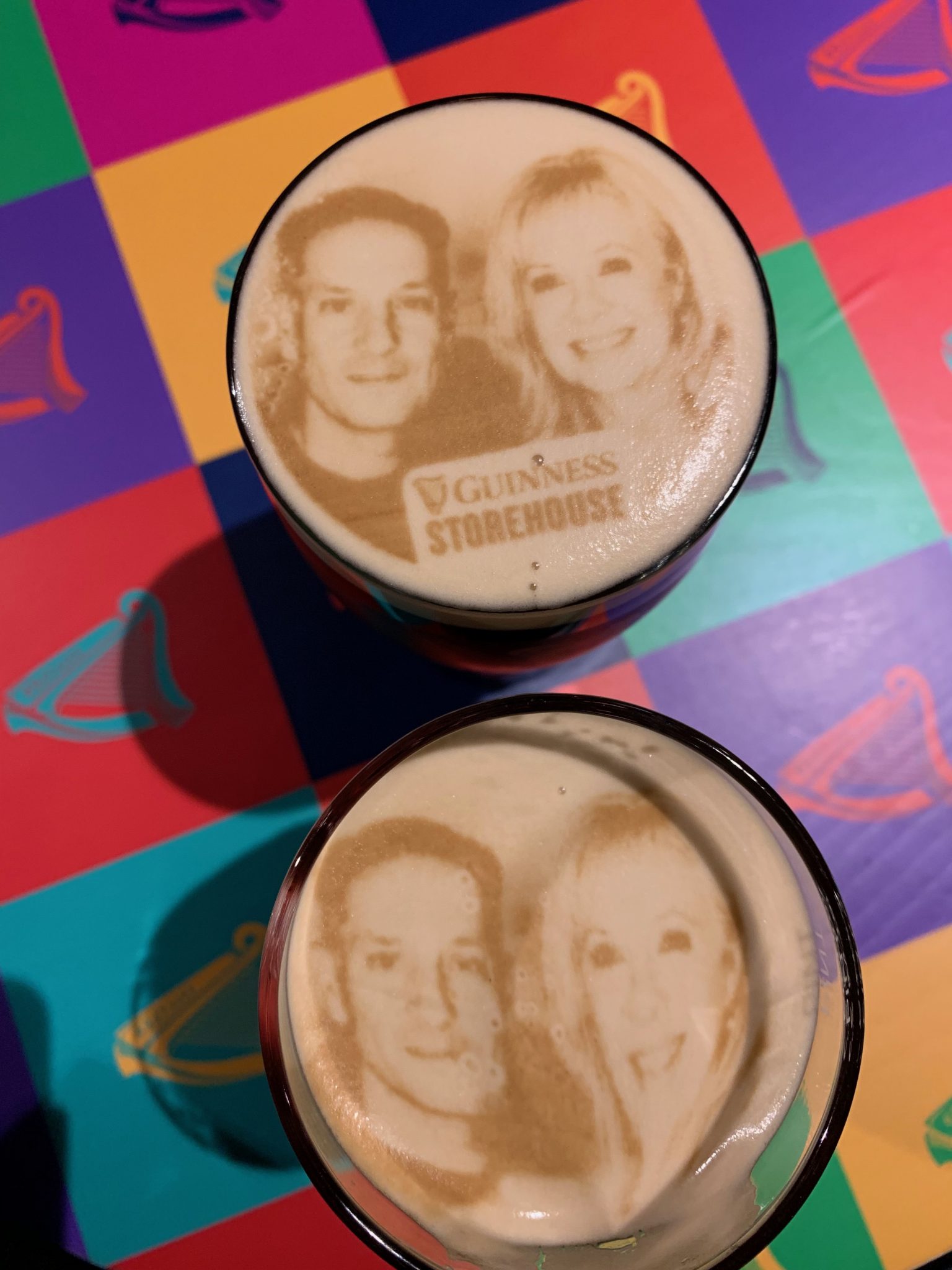 And, yes, we drank our faces. 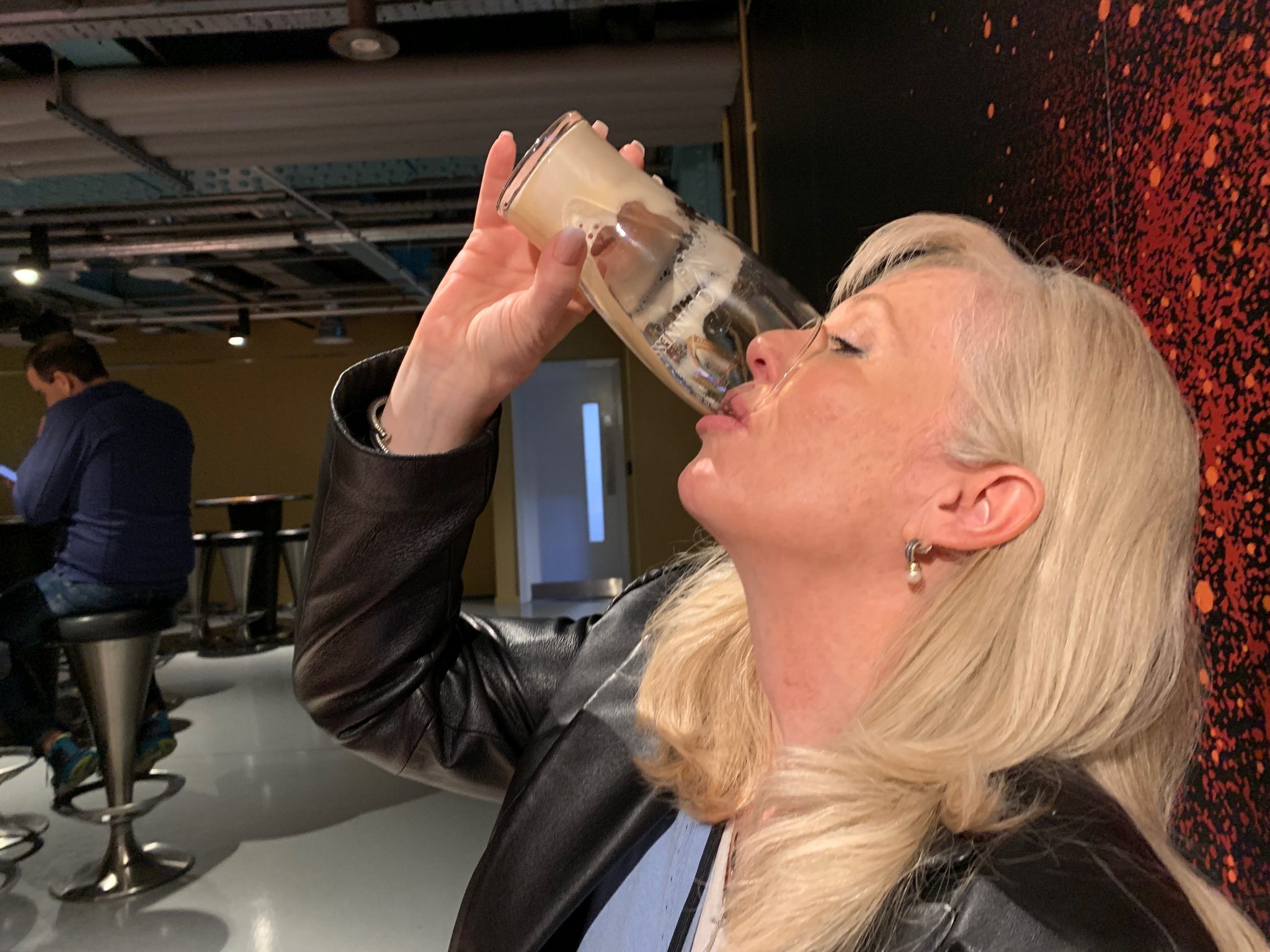 There is a top level to the Guinness Storehouse, the Gravity Bar. It did have nice 360 degree views, but it was loud and crowded. We bailed out to go explore yet another pub in Dublin.

For my fellow Untappd users, here a list of the check-ins from Ireland and Northern Ireland from the Untappd download (which you can get if you are an Untappd Supporter. There are a few additional pubs in the list below that we popped into not mentioned in this post.