Novodevichy Cemetery was the second most prominent place to be buried during the Soviet era, the first being the Kremlin Necropolis. It was opened in 1898 adjacent to the Novodevichy Convent off the Third Ring Road in Moscow. This article includes pictures taken at the Cemetery on our fourth day in Moscow, and our second day with our tour group that was part of our Volga Dream cruise. Some of the notes are from what our tour guide Natalya presented, and others (including trying to translate the names on the gravestones) I did later.

I would highly recommend that visitors get a map of the cemetery. Though they were in Russian, I really regret not getting one. We did not go by some of the cosmonaut sculptures and memorials, but we covered a lot of ground. We visited both the “old” and “new” parts of the cemetery.

By far my favorite sculpture in the cemetery is very close to the entrance. It is of Mr. Yuri Nikulin (December 18, 1921 – August 21, 1997) and his Dog. Mr. Nikulin was a film star and circus clown, and the head of the Tsvetnoi Boulevard circus. This article has a  biography of his life. Unfortunately I have not been able to find the name of his dog. 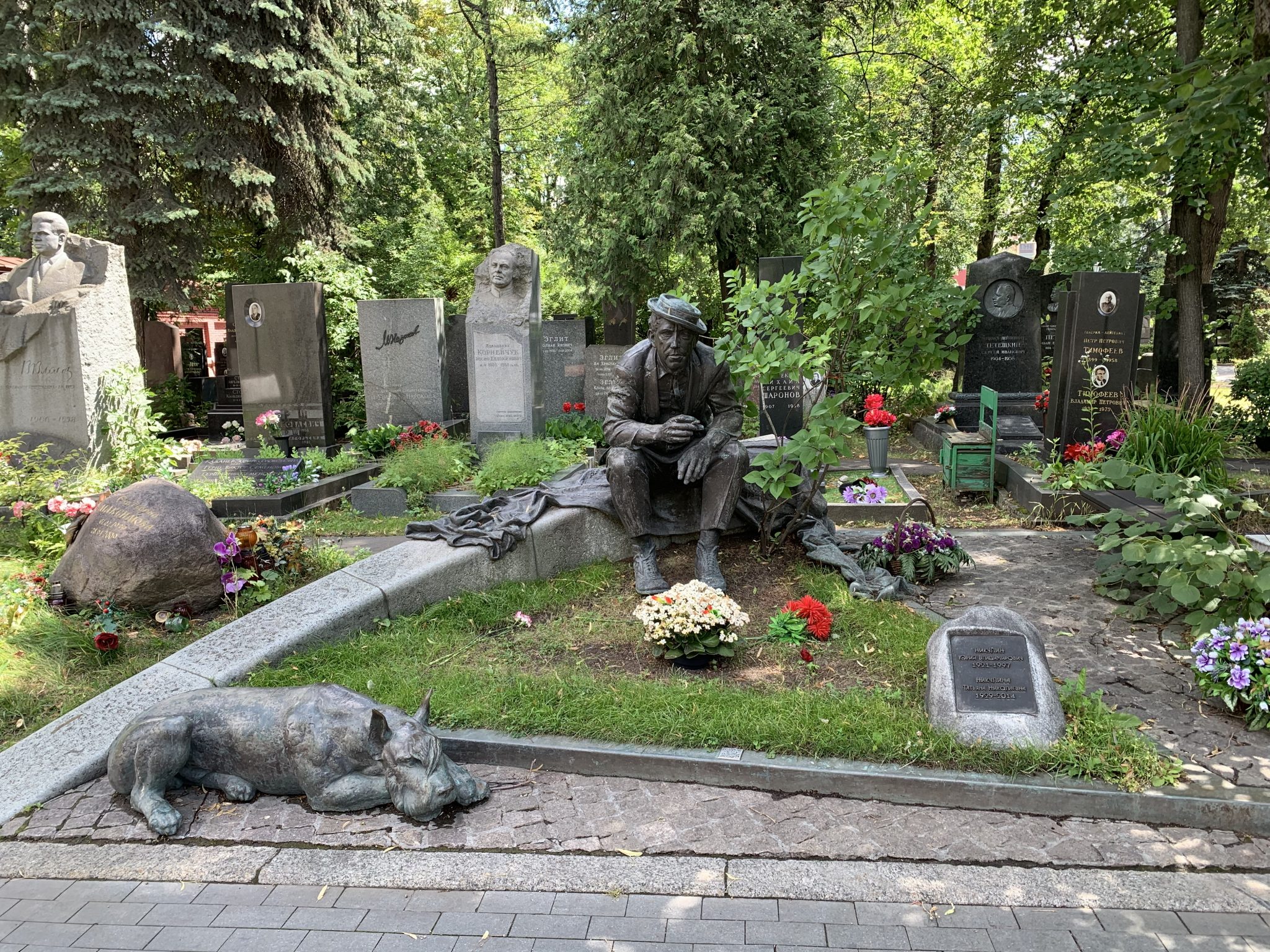 Below is a second view, showing other unique sculptures near Mr. Nikulin. 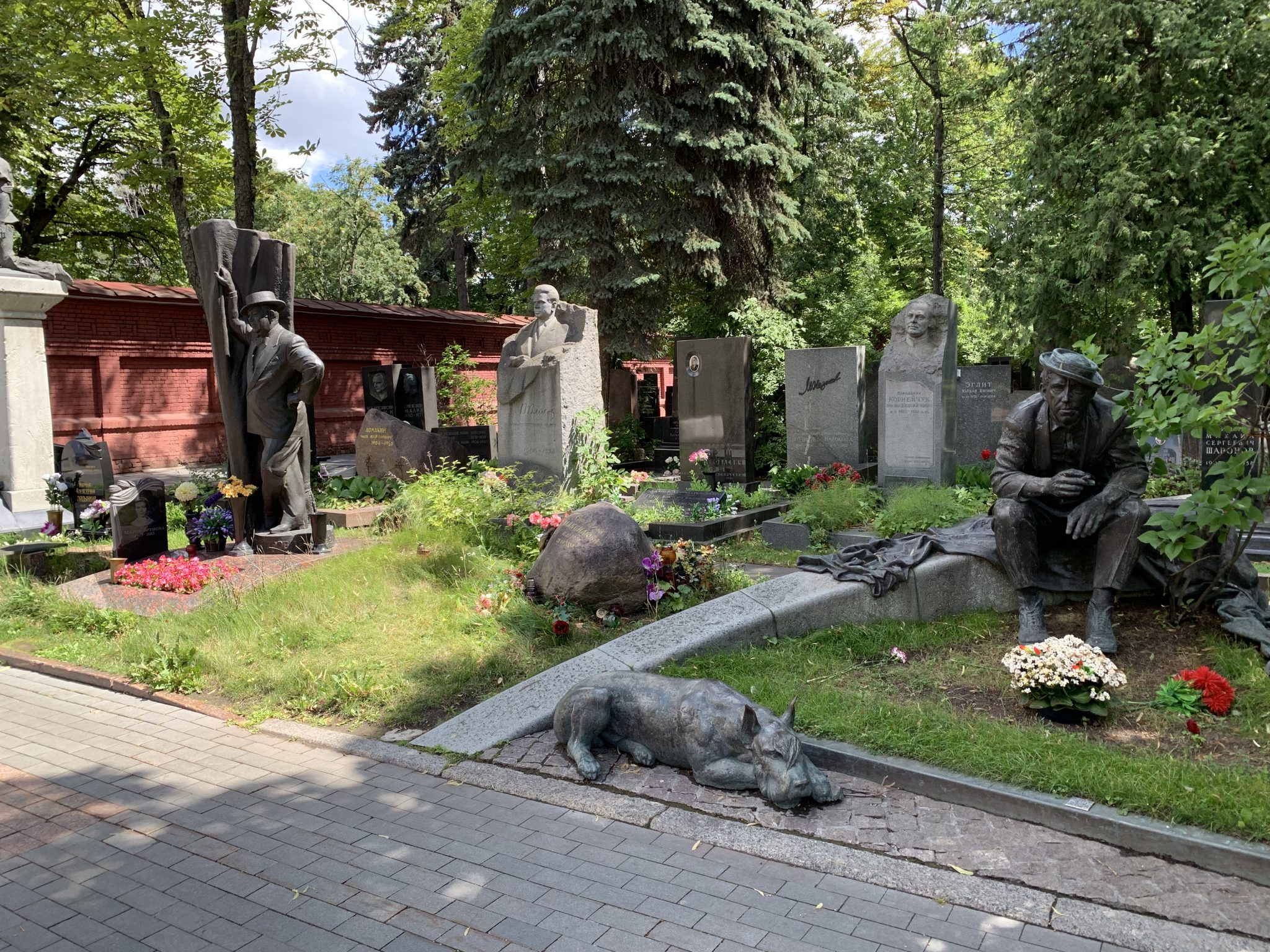 Dmitri Shostakovich (Дми́трий Дми́триевич Шостако́вич), pianist and composer of many symphonies is buried at Novodevichy Cemetery. Shostakovich was born in St. Petersburg (September 1906) and well-known for his Seventh Symphony written and performance during the siege of Leningrad. His family moved to Moscow in 1943 and he died there of lung cancer August 9, 1975. His marker in the photo below shows a treble clef with his DSCH motif which spells out the composers initials in German transliteration. Pretty cool. 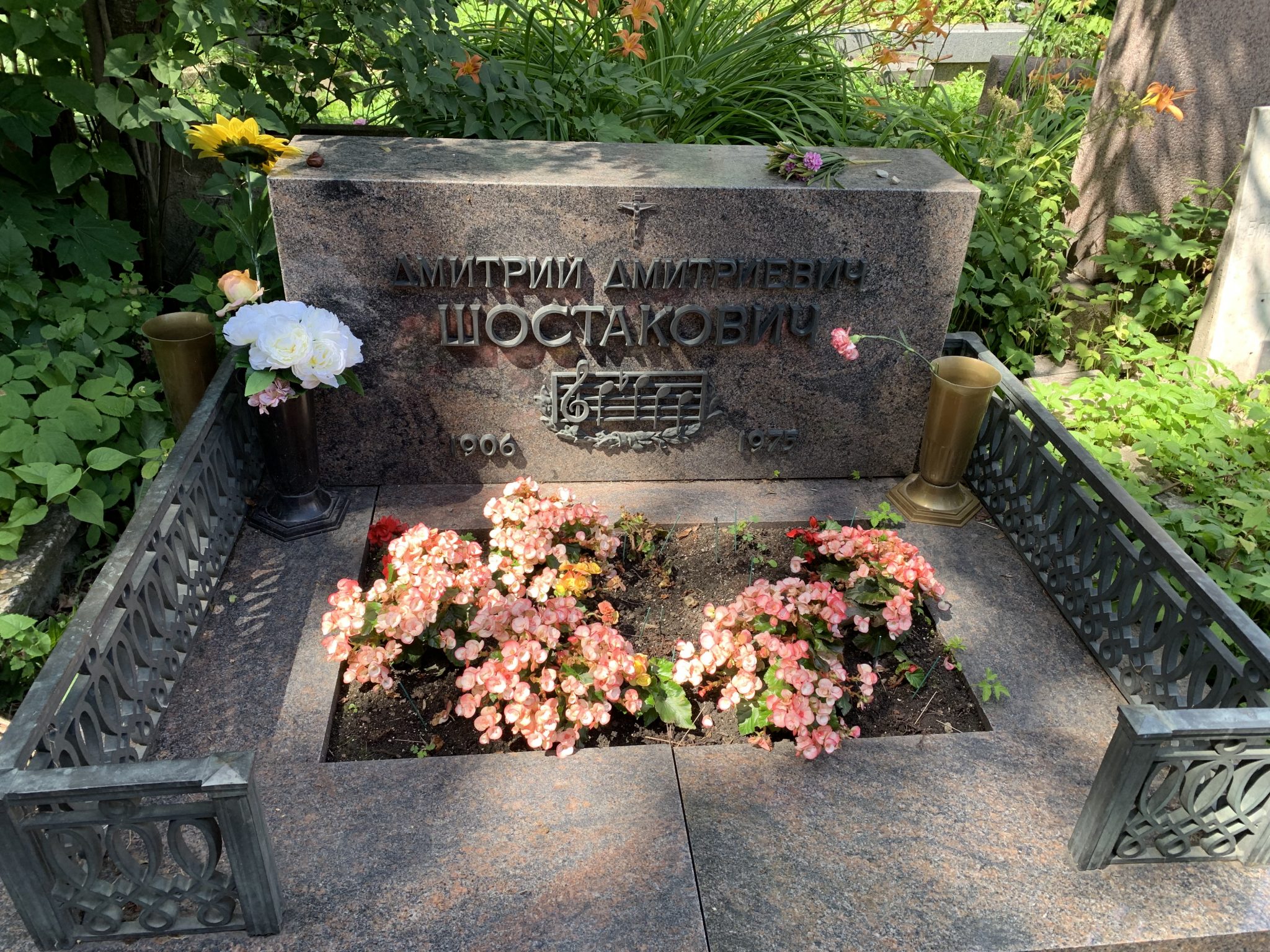 Below is the grave of cellist and conductor Mstislav Rostropovich (March 27, 1927 – April 27, 2007). Rostropovich had a contentious relationship with the Soviet Union, to put it mildly. He was a student of the afore mentioned Dmitri Shostakovich in 1948 when Shostakovich was dismissed from his professorships. In the 1970s, Rostropovich sheltered Aleksandr Solzhenitsyn. He and his family left the Soviet Union in 1974, and he was banned from performing there. He did not return until 1990. He was friends with Boris Yeltsin who was buried in the same cemetery four days before Rostropovich. 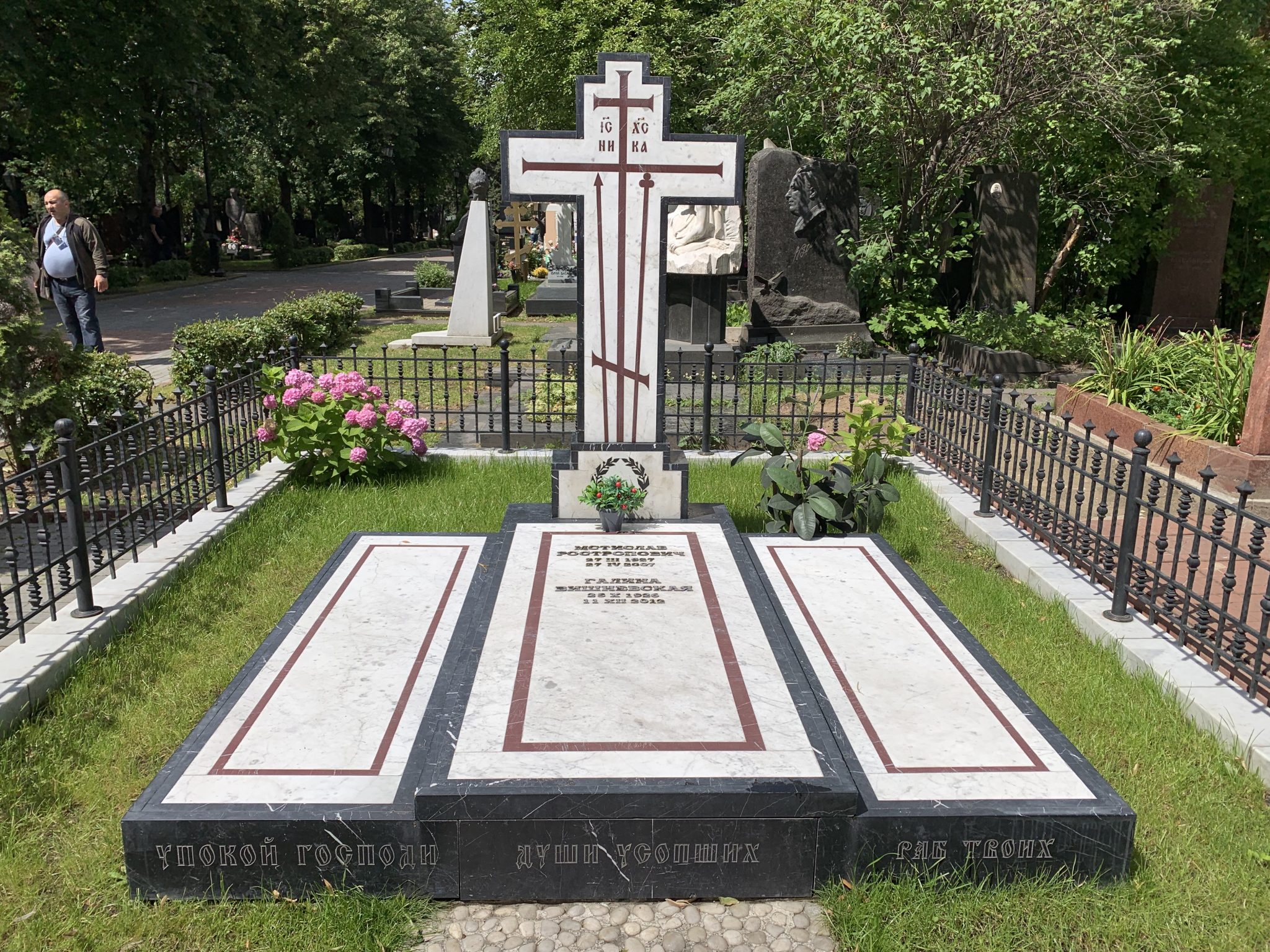 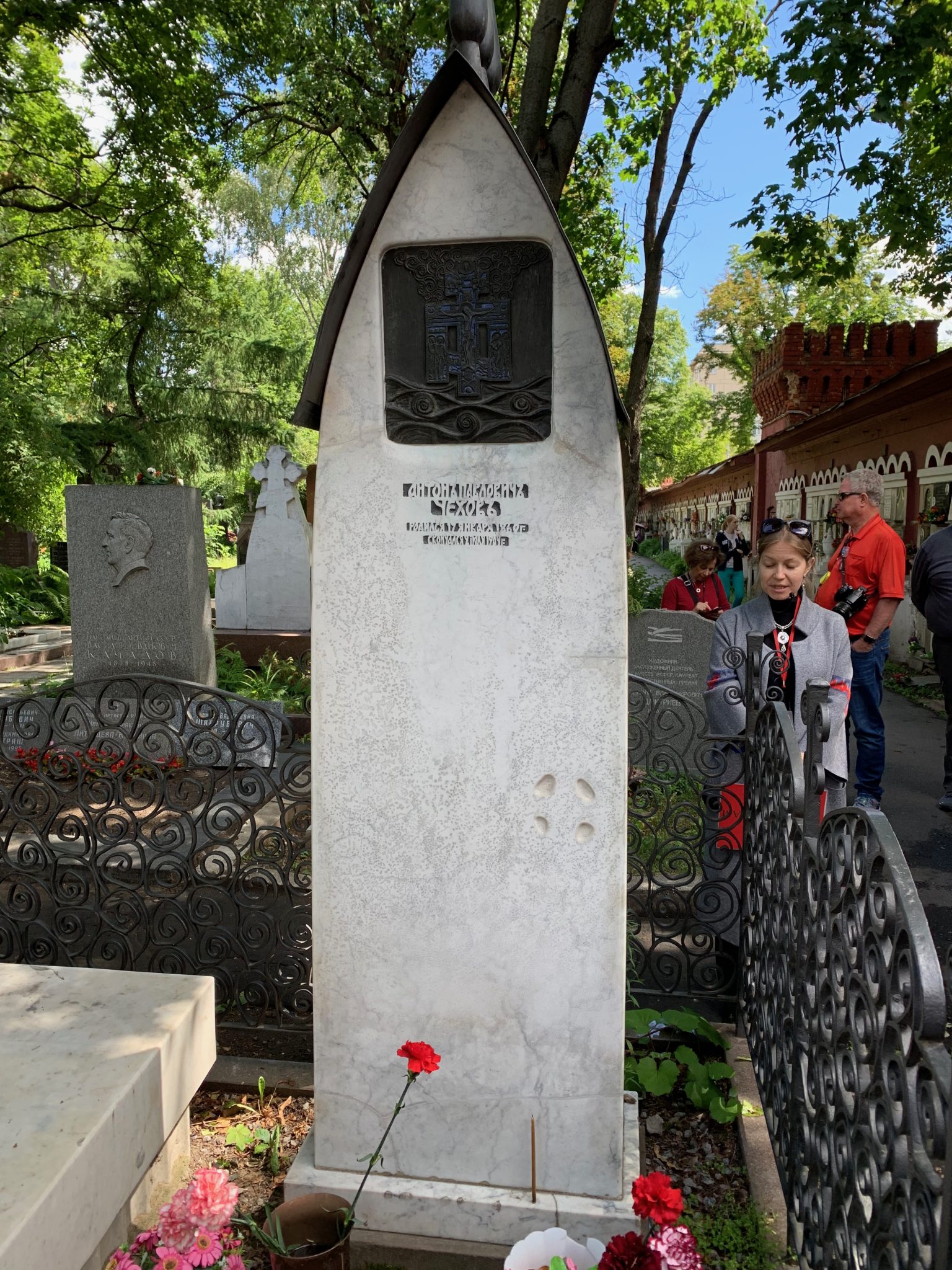 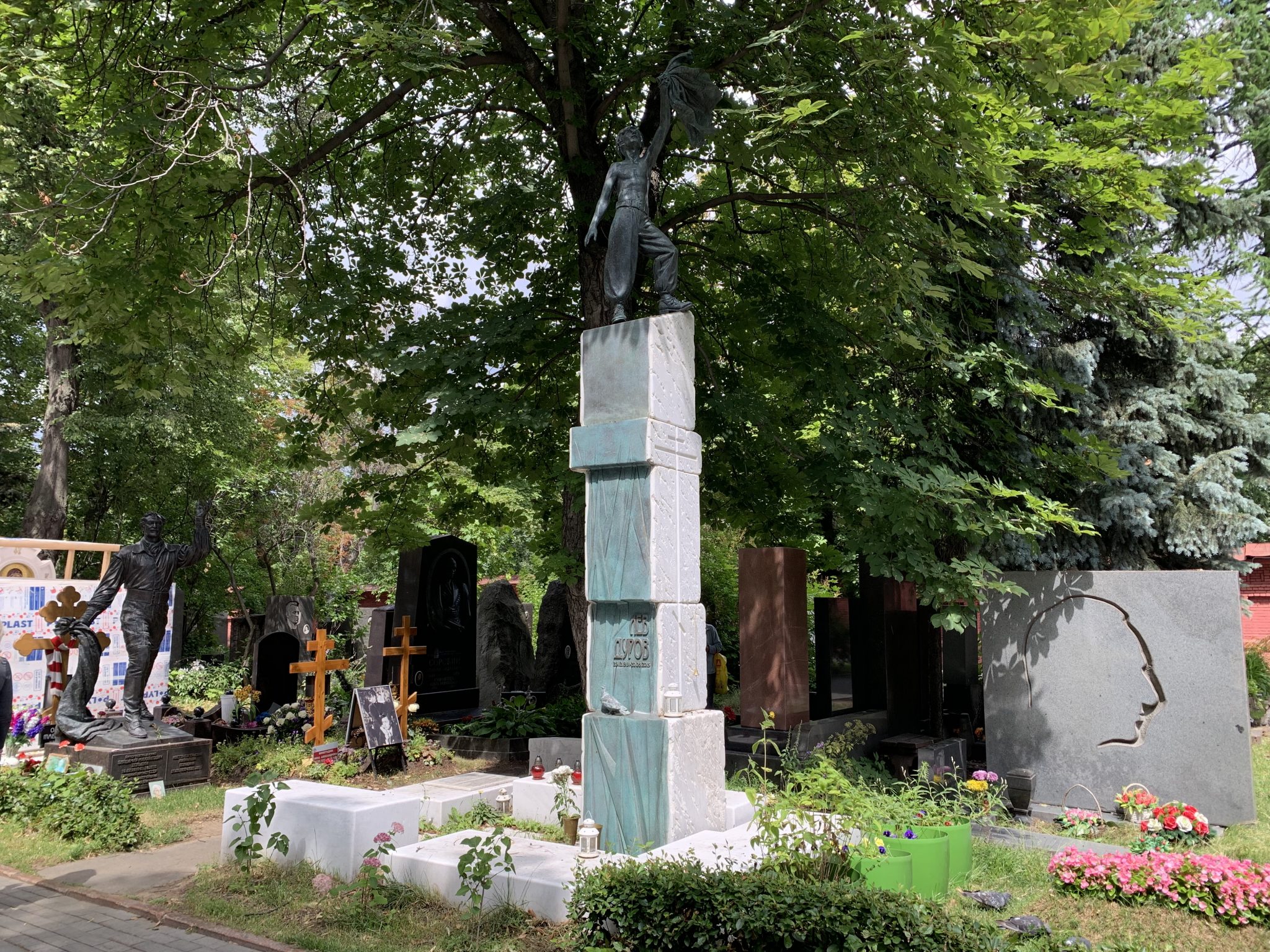 I could not figure out who this author or playwright or musician was…but his monument is very cool. 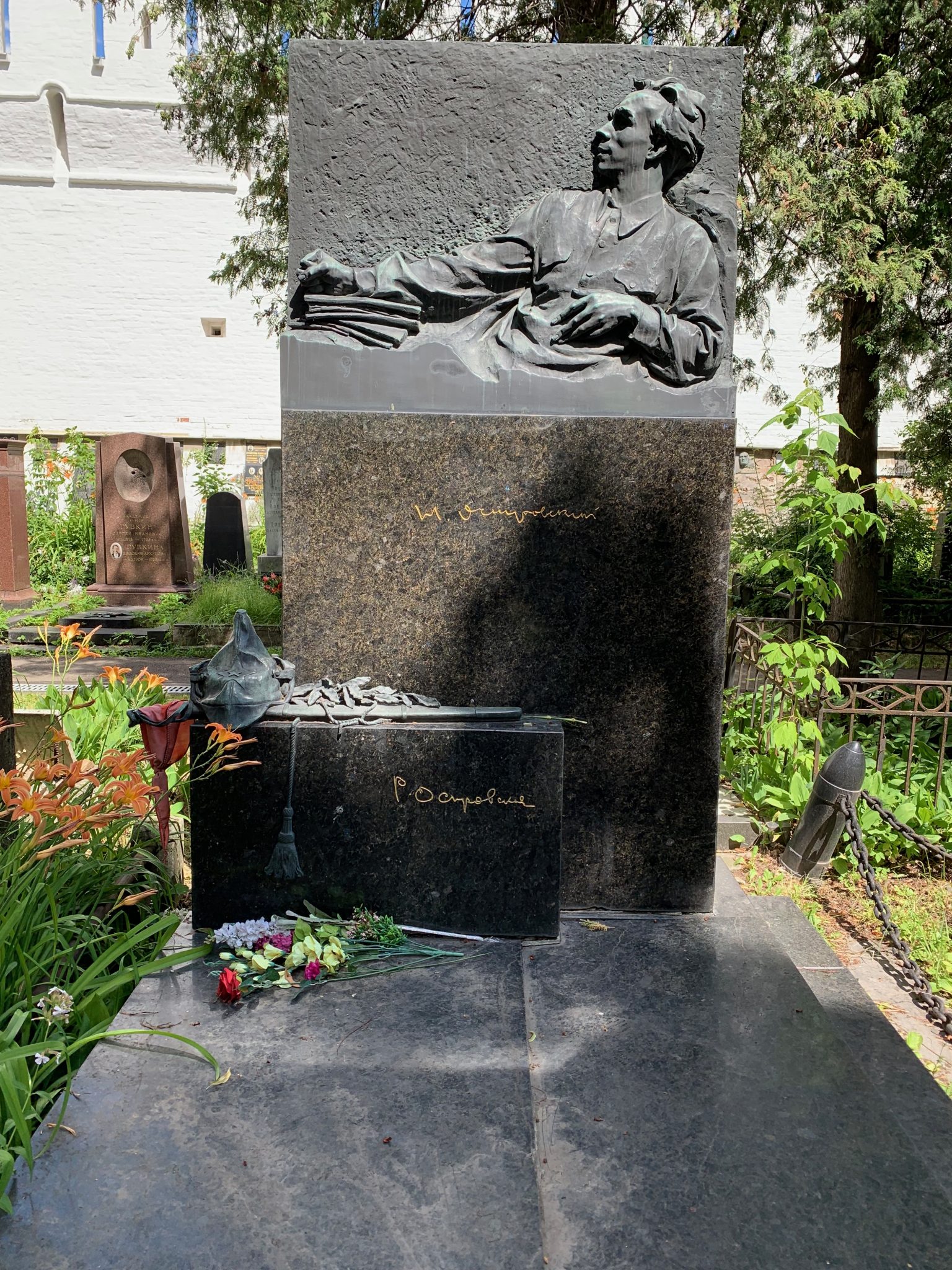 Heads of State at Novodevichy Cemetery

Of all of the Soviet leaders, only Nikita Khrushchev is buried in Novodevichy Cemetery. The rest of the Soviet heads of state are buried at the Kremlin.

Below is the sculpture and burial site of Khrushchev (September 14 1953 – October 14 1964). Khrushchev was leader of the Soviet Union from 1953 – 1964. As opposed to Boris Yeltsin’s gravesite and marker, which is right at the entrance to the cemetery, Khrushchev’s is way in the back. 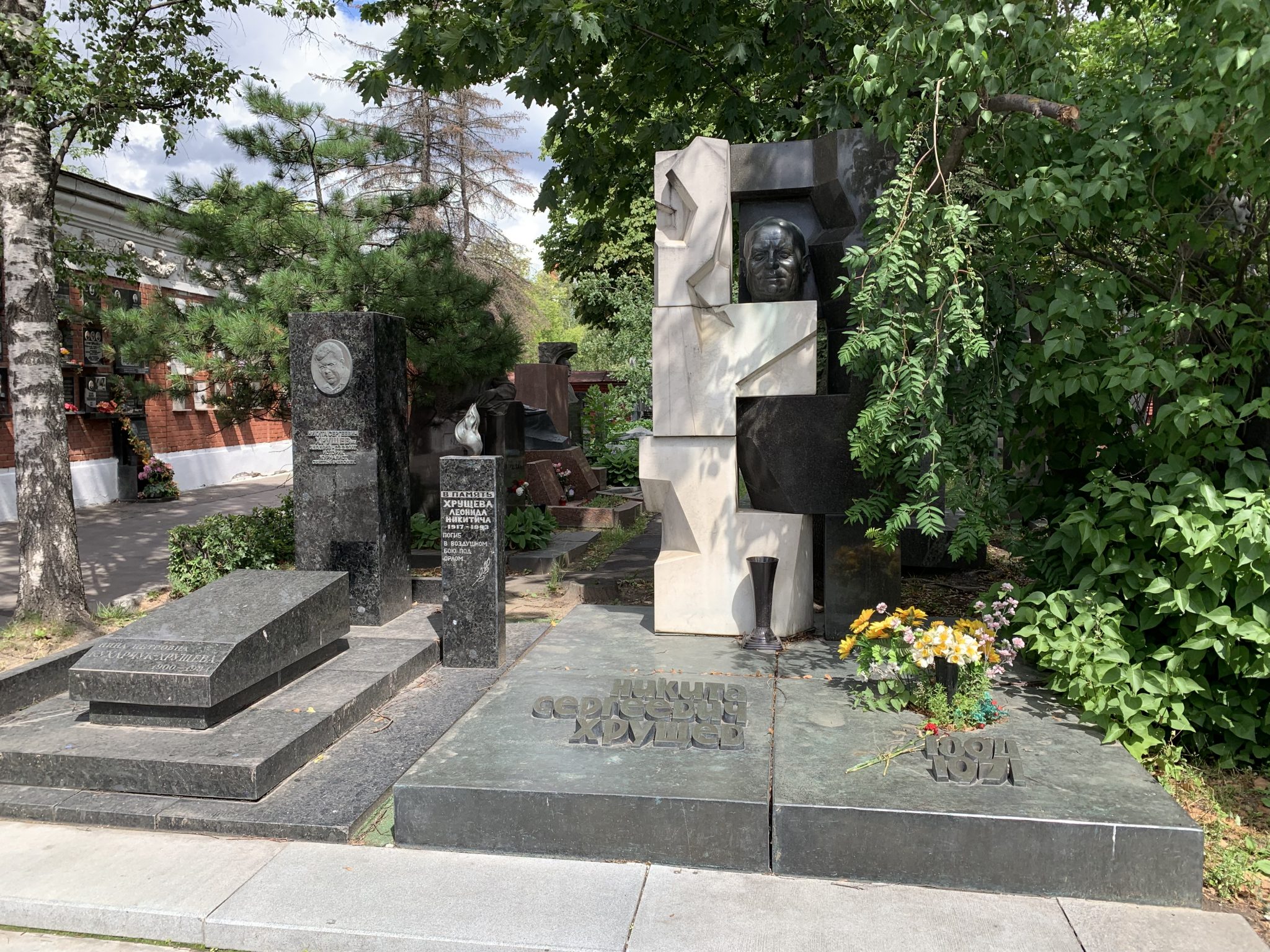 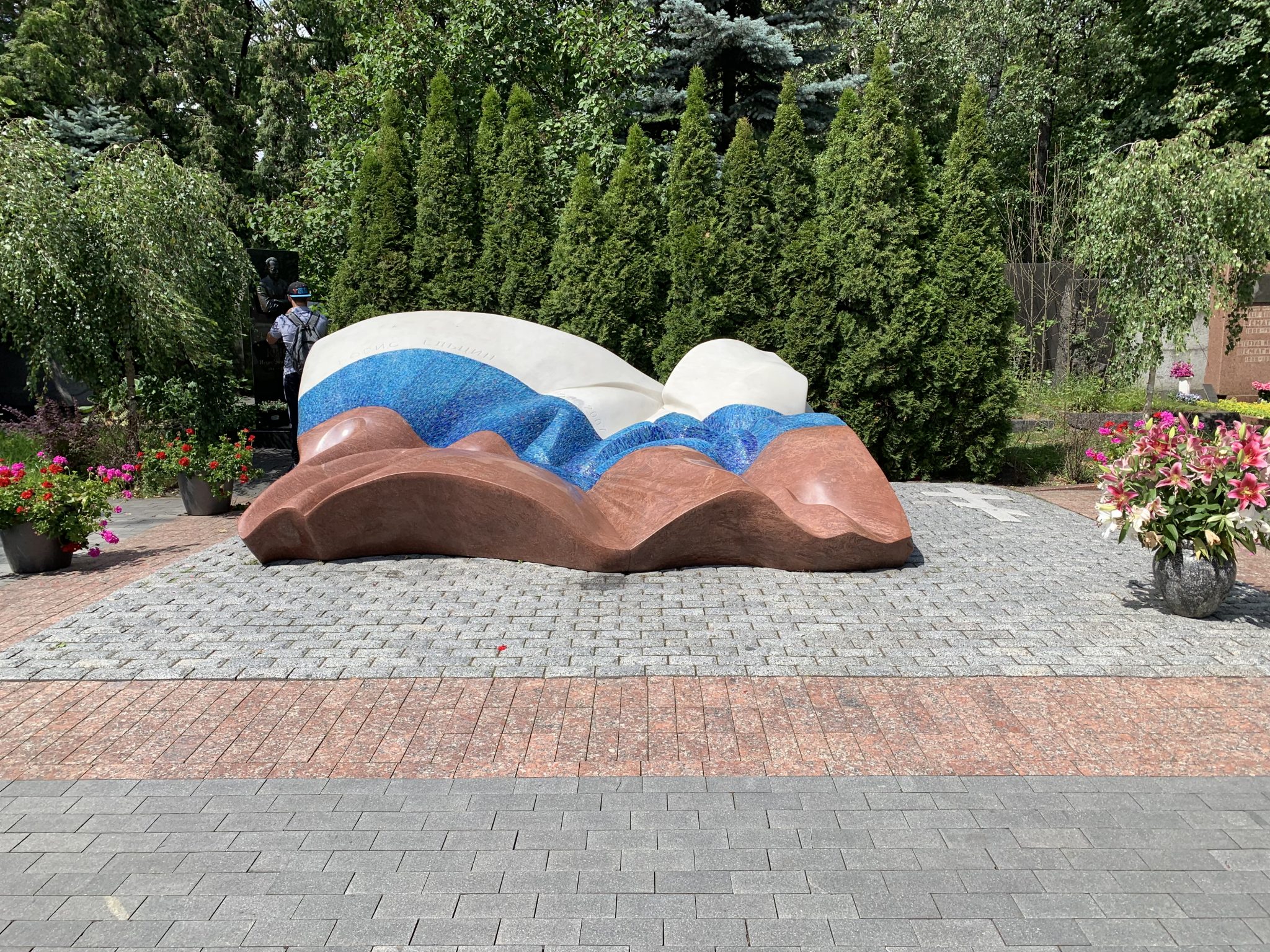 Below is the statue and gravesite of Raisa Gorbacheva (January 5, 1932 – September 20, 1999). She was the wife of Mikhail Gorbachev, and she was very active in raising funds for lots of programs during and after her husband’s tenure. 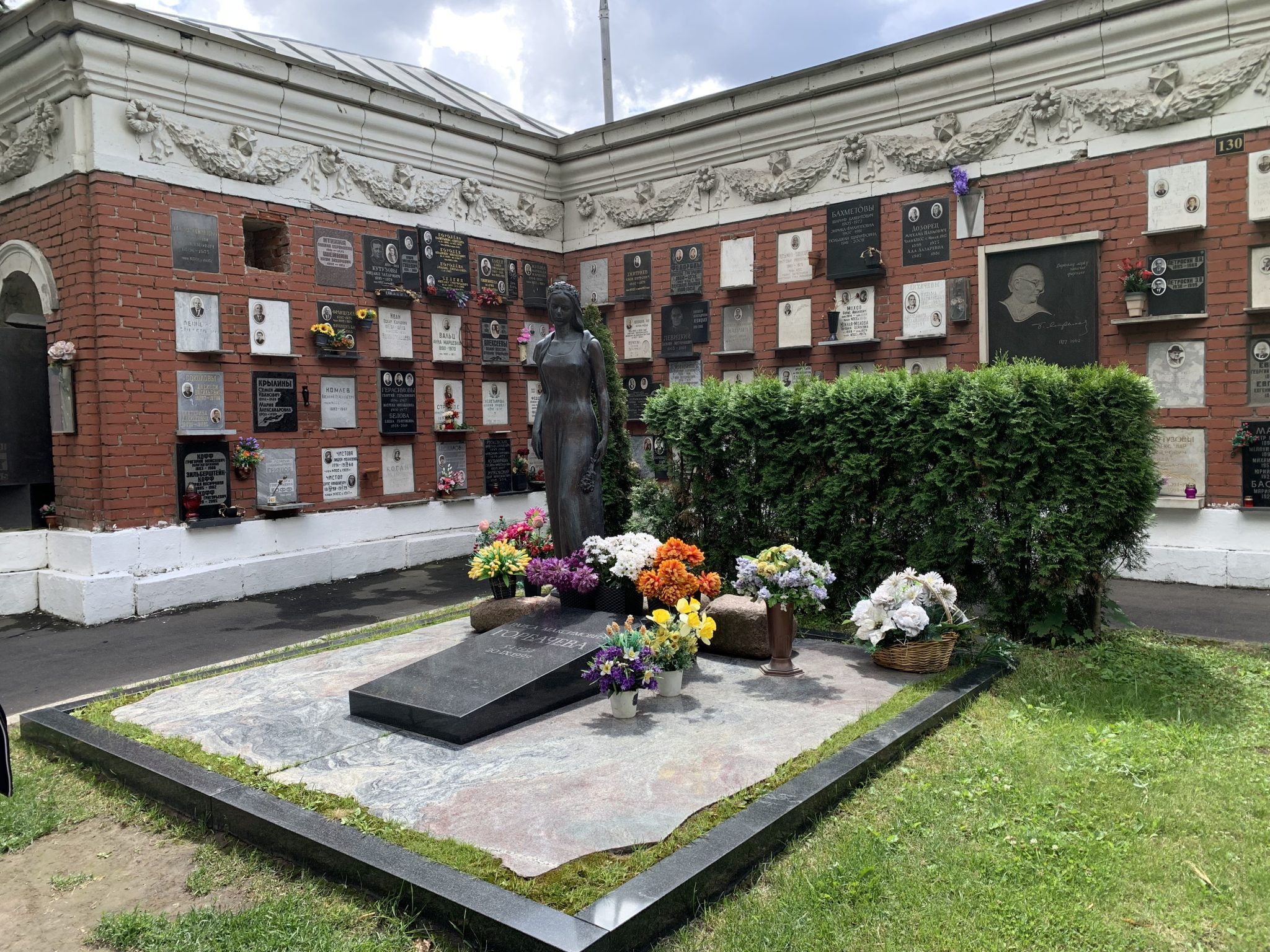 There are several individual and group monuments and sculptures to military figures. The one below is the Tomb of Heroes of the Soviet Union. From left to right they are Lev Dovator, Victor Talalikhin and Ivan Panfilov. 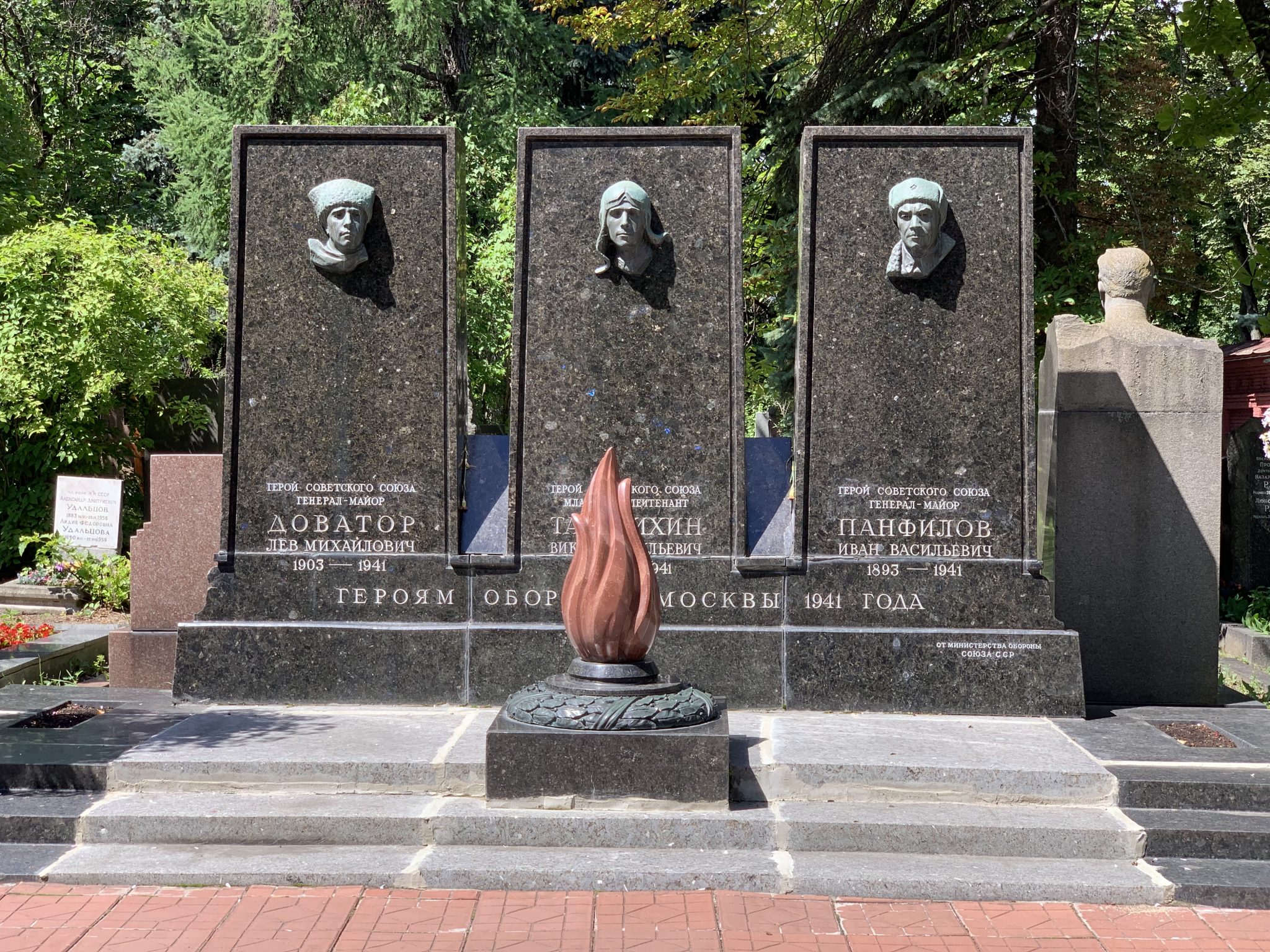 The statue and gravesite below belongs to Vladimir Govorov, a Soviet General and politician. He was made a Hero of the Soviet Union in 1984. The flat part of the monument looks like a tank, though Govorov led artillery batterys. There is a nice row of artillery shells at the base of his monument. 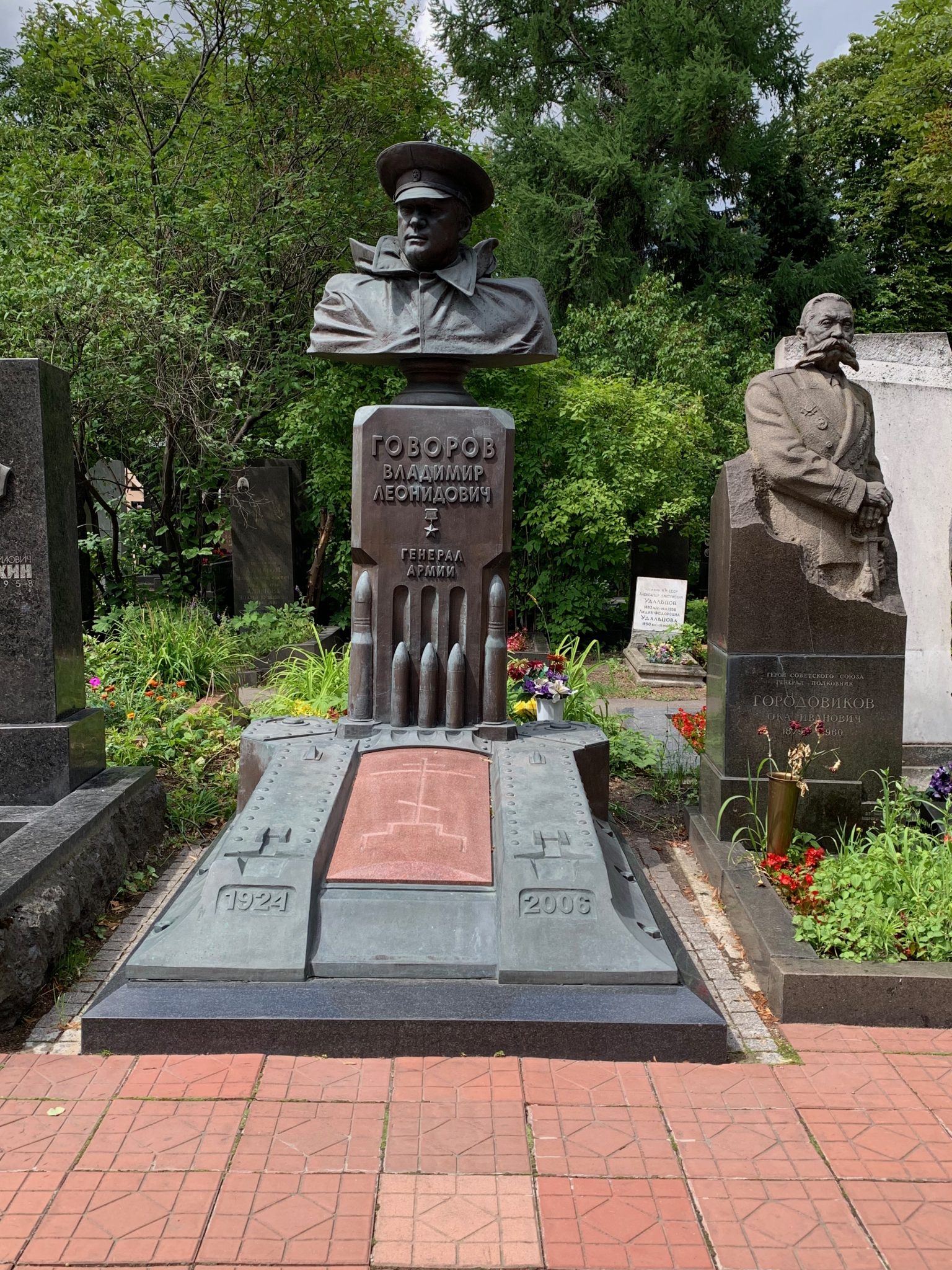 Below is the memorial and burial site for the six people on board the supersonic Tupolev Tu-144 plane that crashed at the 1973 Paris Air Show. The plane was piloted by Mikhail Kozlov. 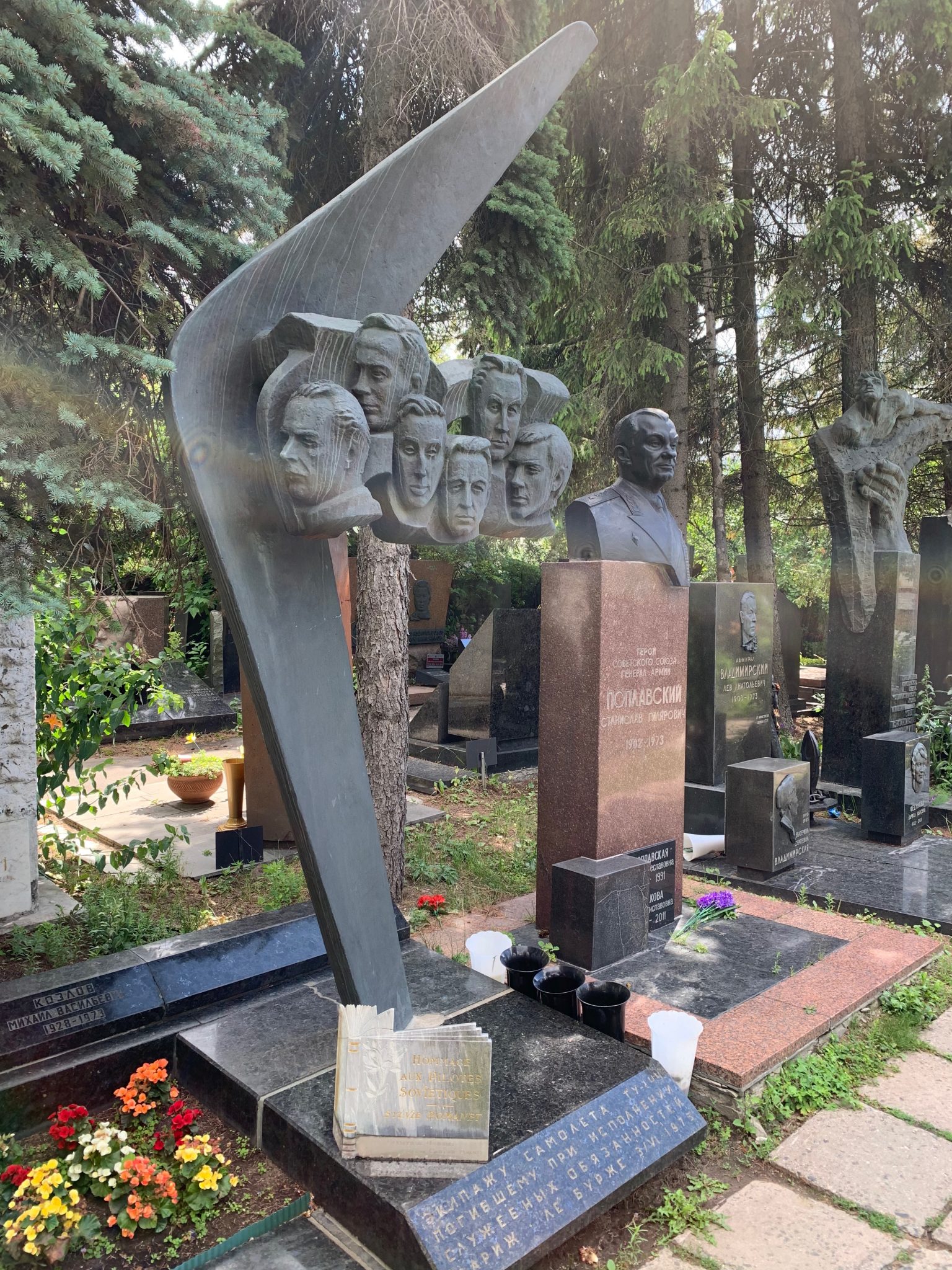 I could only find articles on this gentleman in Russian. I’m assuming based on the date that he died in World War II (known as the Great Patriotic War in Russia). I believe his name translates to Arkady Kuzmich Sivkov and that he was the head of several artillery commands, including the artillery of the North Caucus Front in 1943. 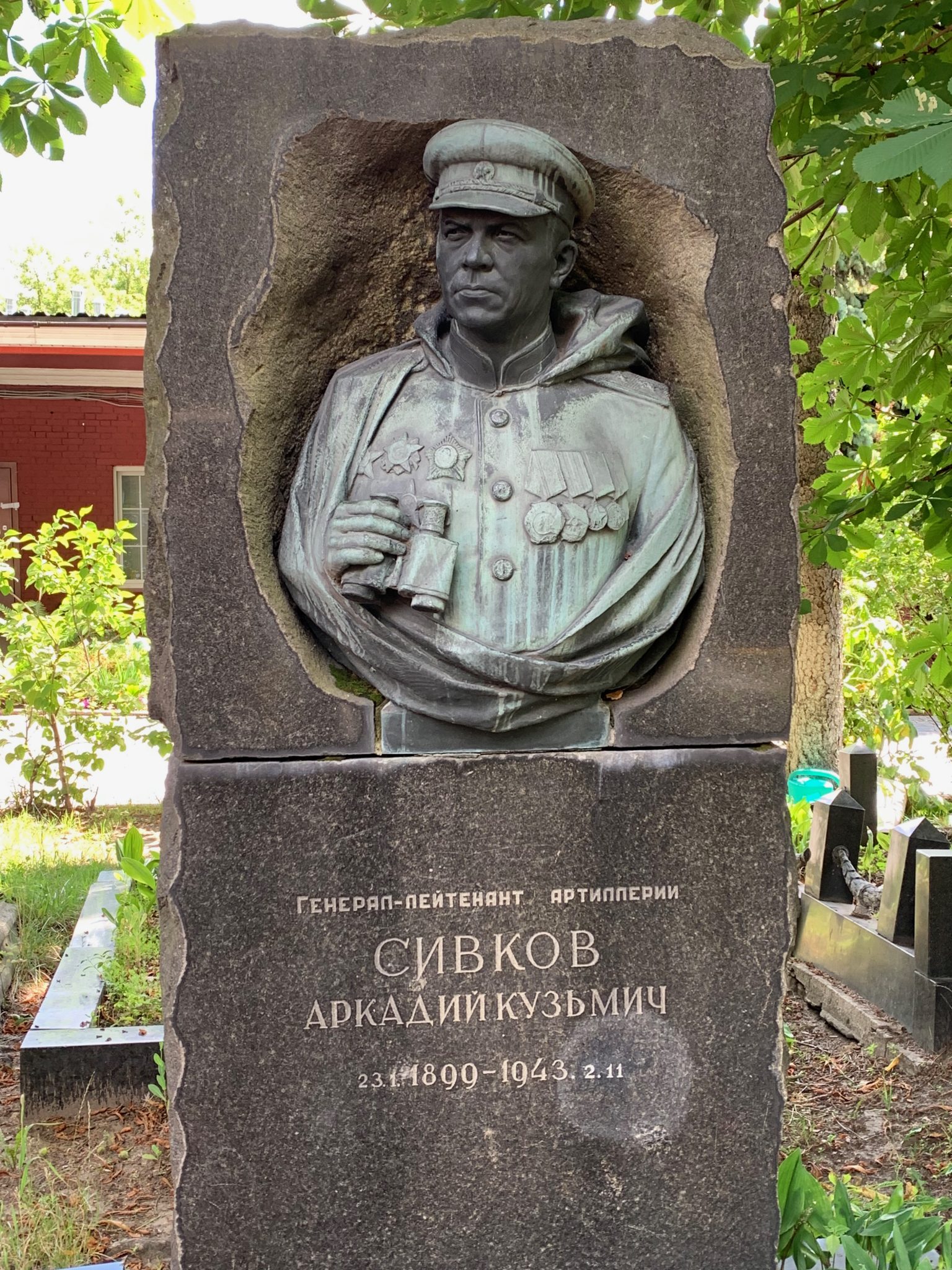 The juxtaposition of the airman’s sculpture and the photo placed on his grave is excellent. 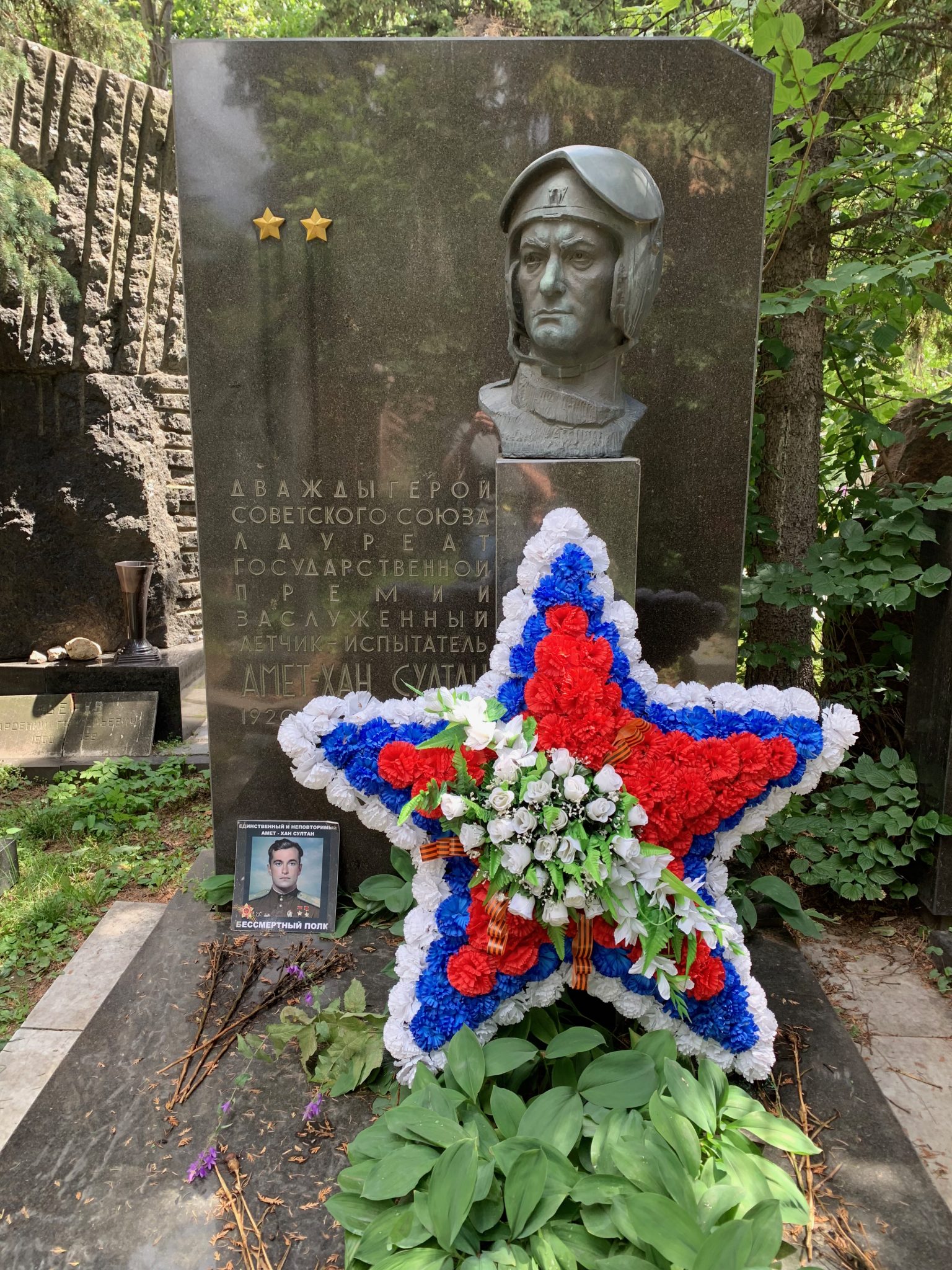 Other Sculptures in the Cemetery

We were only at Novodevichy Cemetery for a short visit so there was a lot more to be seen. I truly regret not finding some of the cosmonaut memorials. There are sculptures of all types and ages. Below are just a few random shots from our visit. 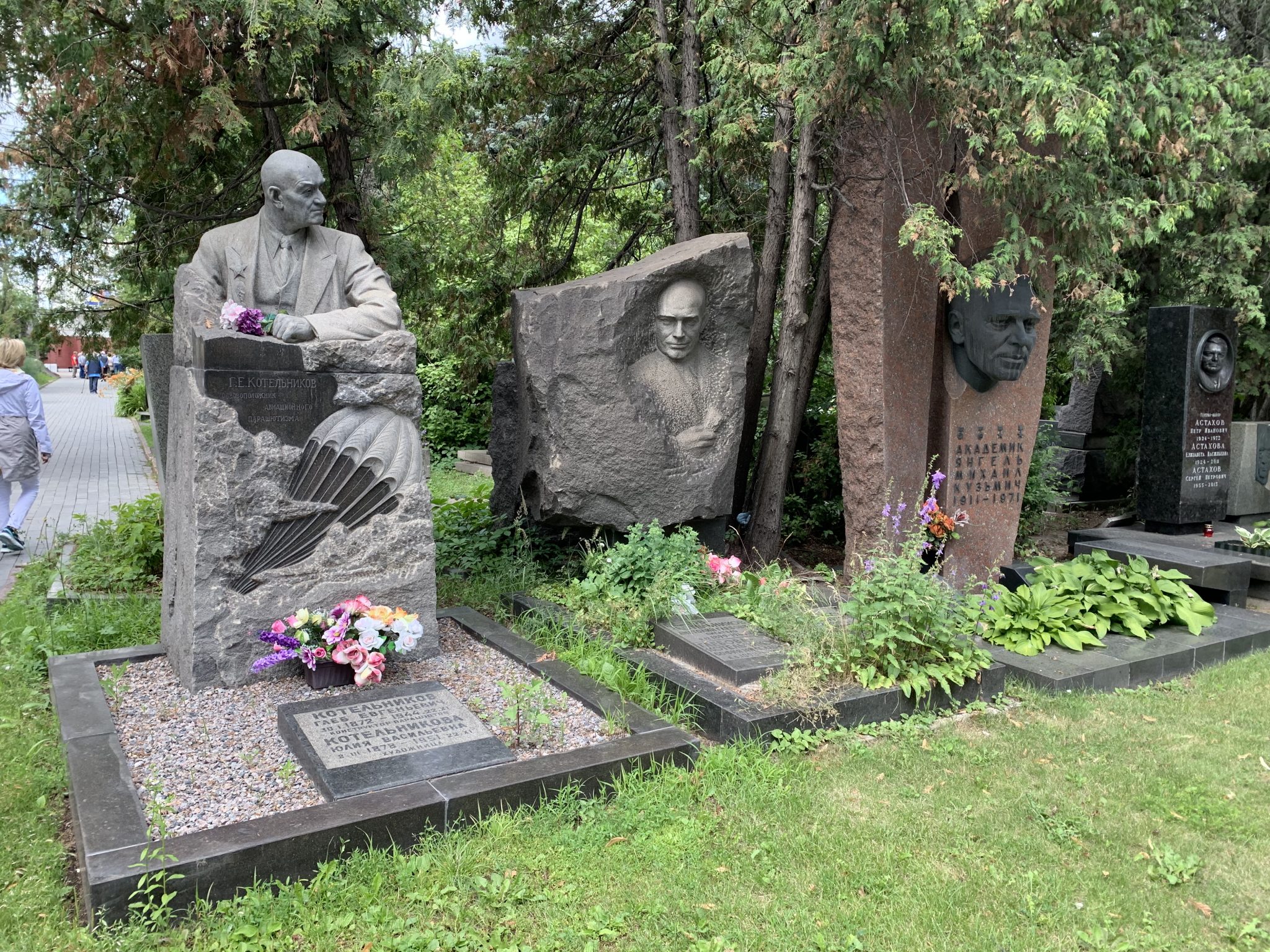 This gravesite with several layered leaning stones is interesting. I cannot tell if the dates on the leaning stones signify several people buried in the site, or if they are important dates in this person’s history. 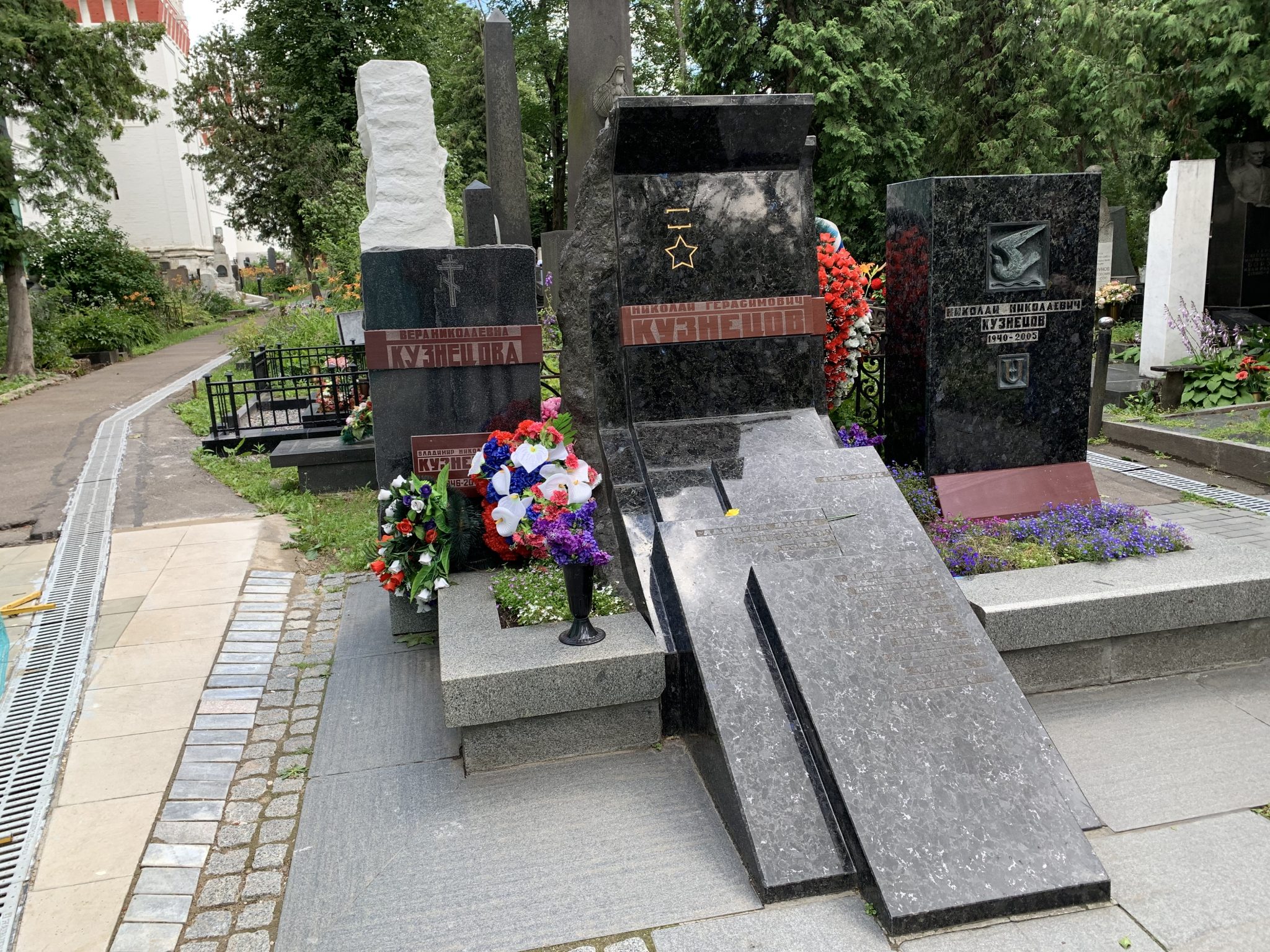 Everywhere you turn in Novodevichy Cemetery there are sculptures like this. It is certainly a place full of history, art and memories. 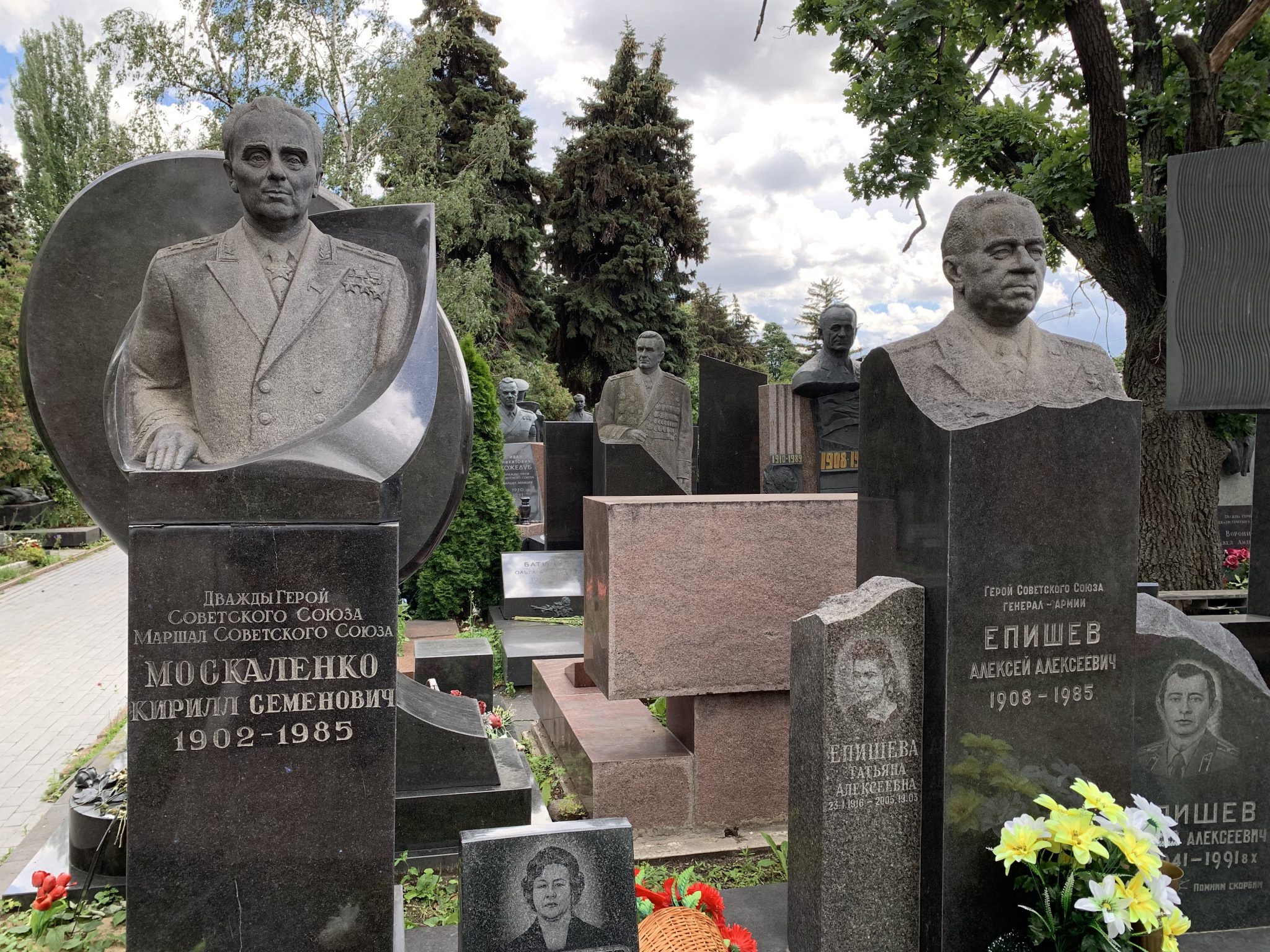