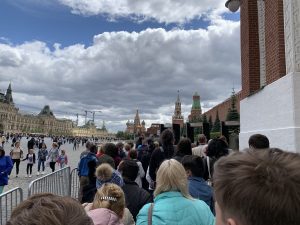 On the 4th of July, 2019, we joined the line to go into Lenin’s Mausoleum in Red Square, Moscow. The line was long but moved along at a good pace. The area one can visit includes not just Lenin’s Mausoleum but twelve tombs and the Kremlin Wall Necropolis, resting places for a large number of Russian leaders. The necropolis is in the walls behind the tomb.

Red Square and the wall of the Kremlin where the Kremlin Wall Necropolis exists are separated by some blue spruce trees. The original ones had to be cut down some years ago in 2007 because of disease. In the photo below you can see some plaques on the wall with flowers underneath, marking where remains were interred in the wall. There are plaques on both sides of Lenin’s tomb and some behind. 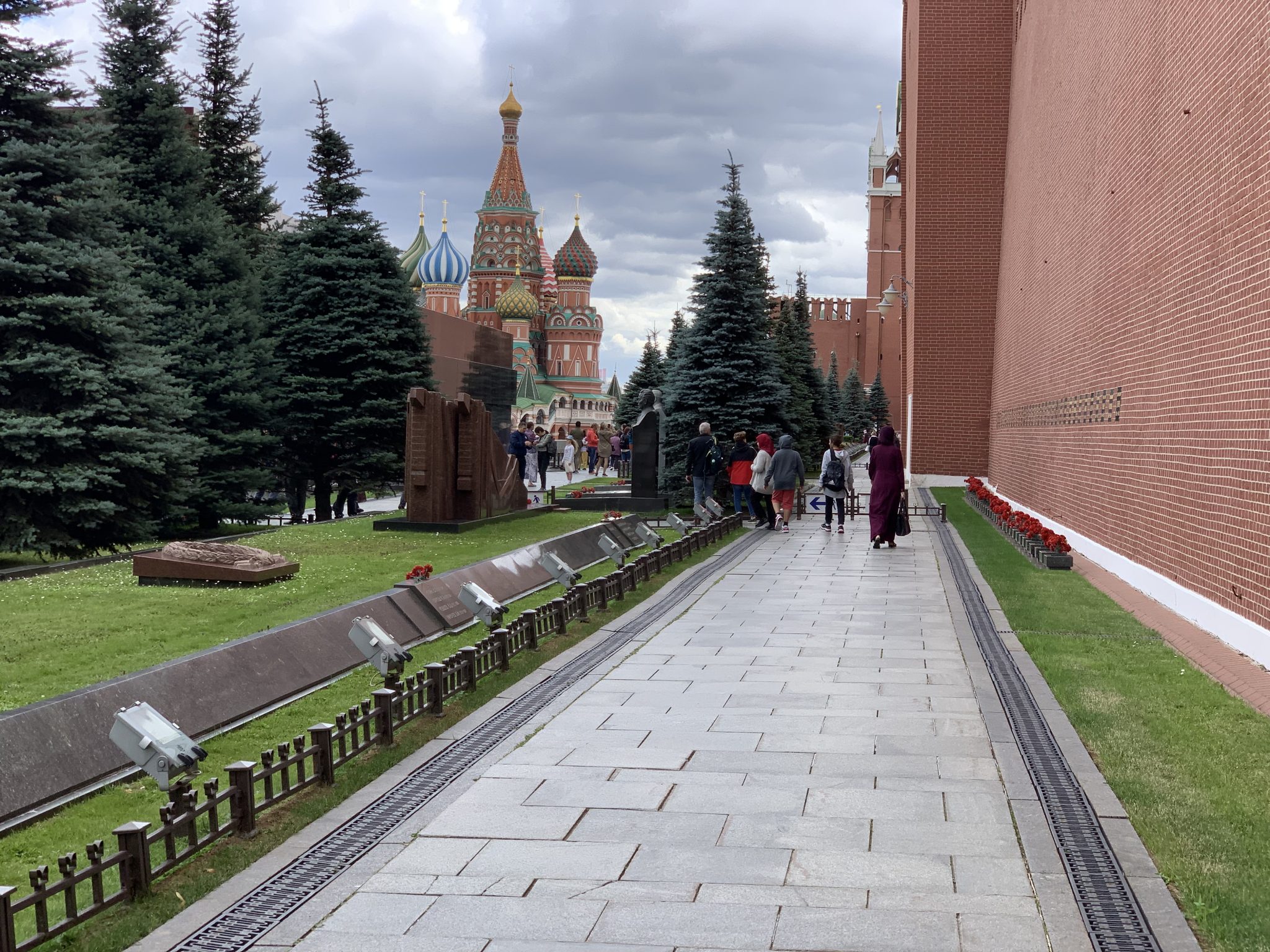 Lenin’s body has been on display almost continuously since 1924. And, as my wife remarked, he looks amazingly well-preserved. There are no photos allowed inside the tomb but photos are allowed outside of the building. 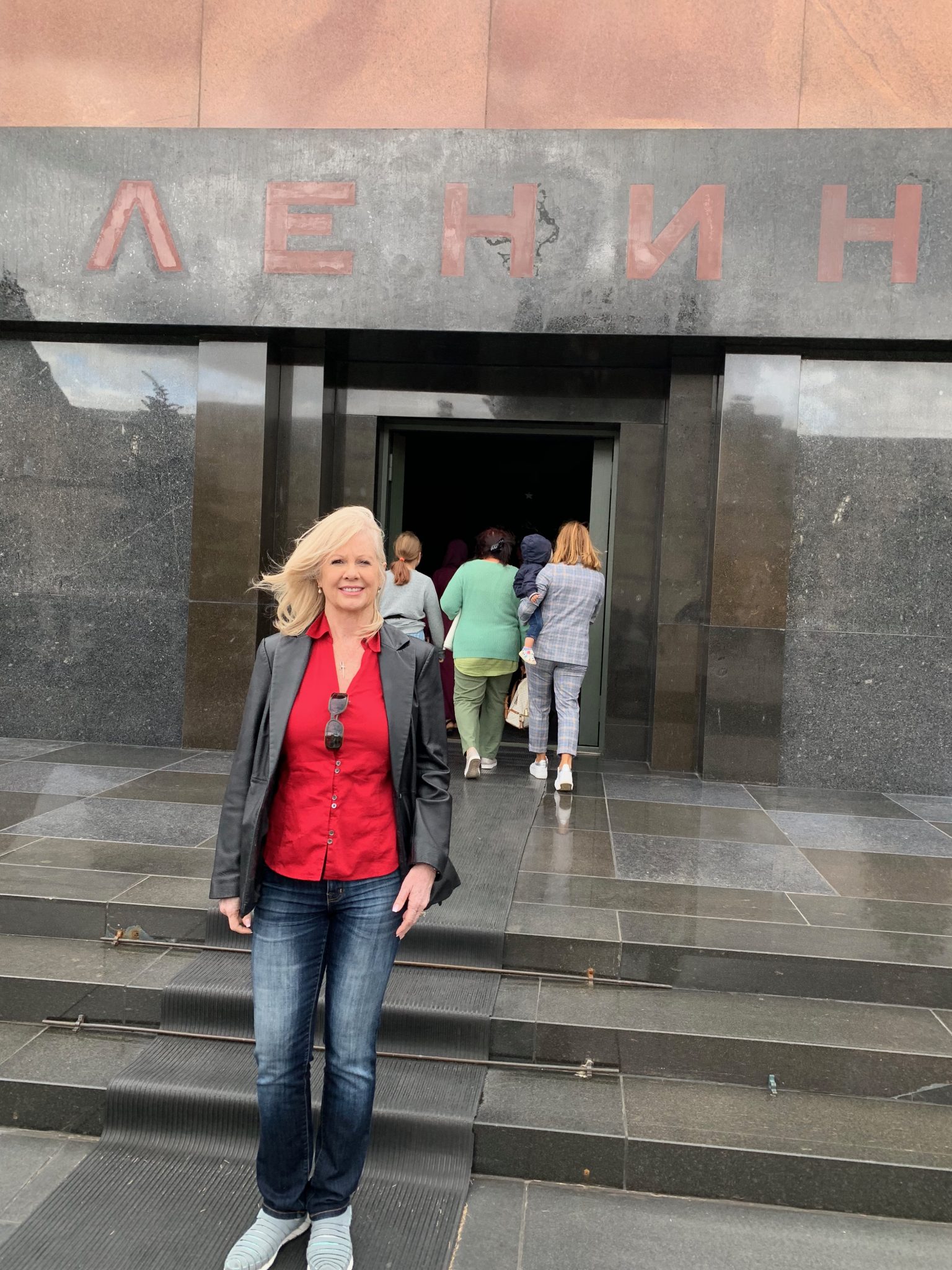 Once inside visitors go down a couple of flights of stairs and walk around the body of Lenin, encased in glass.  Lenin looks like every statue of Lenin.

After the visit, the exit of the Mausoleum leads to the row of twelve tombs. 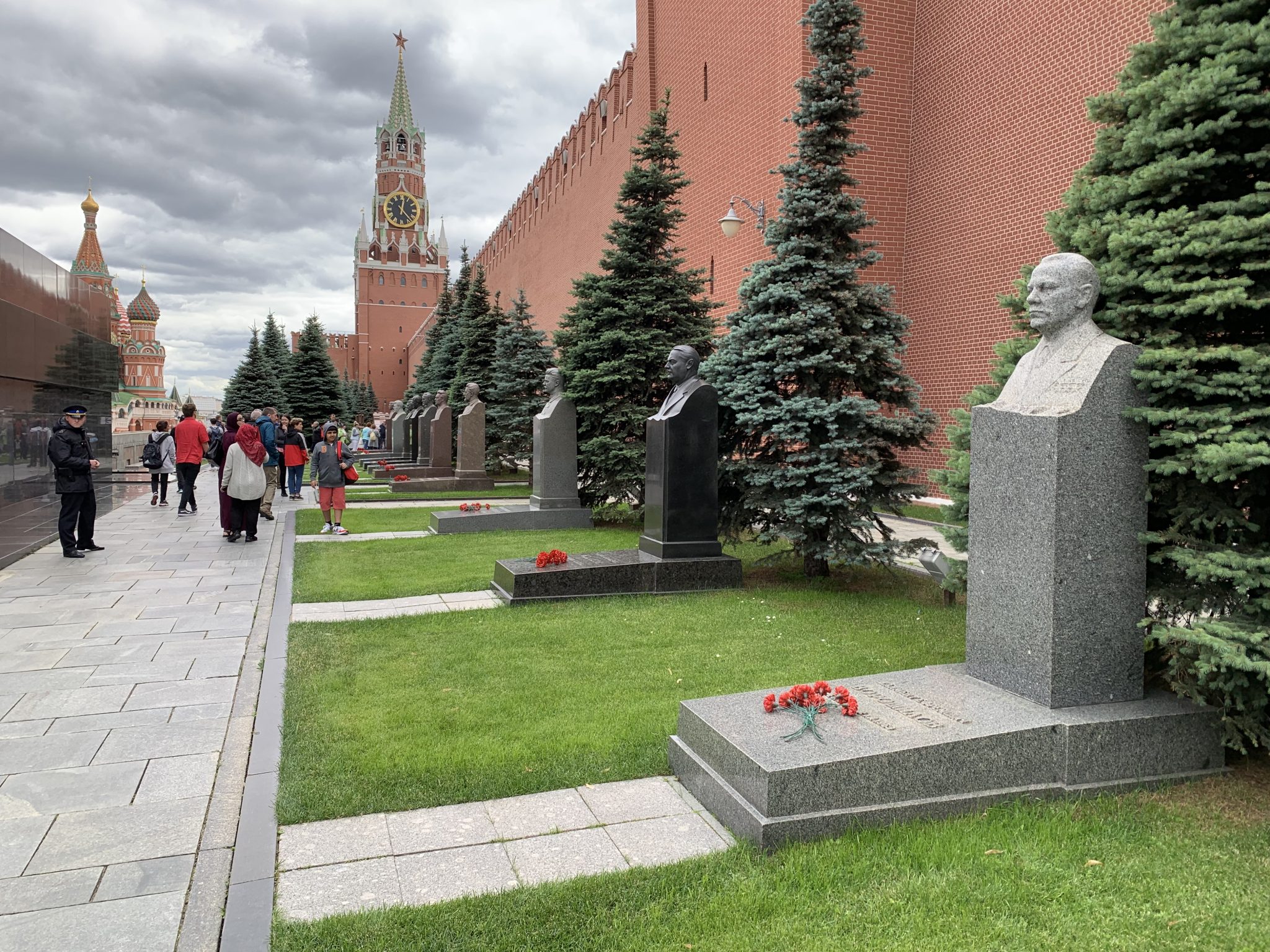 Stalin’s body was interred with Lenin’s from 1953 until 1961. Stalin’s tomb is now behind the mausoleum, with the twelve other tombs. 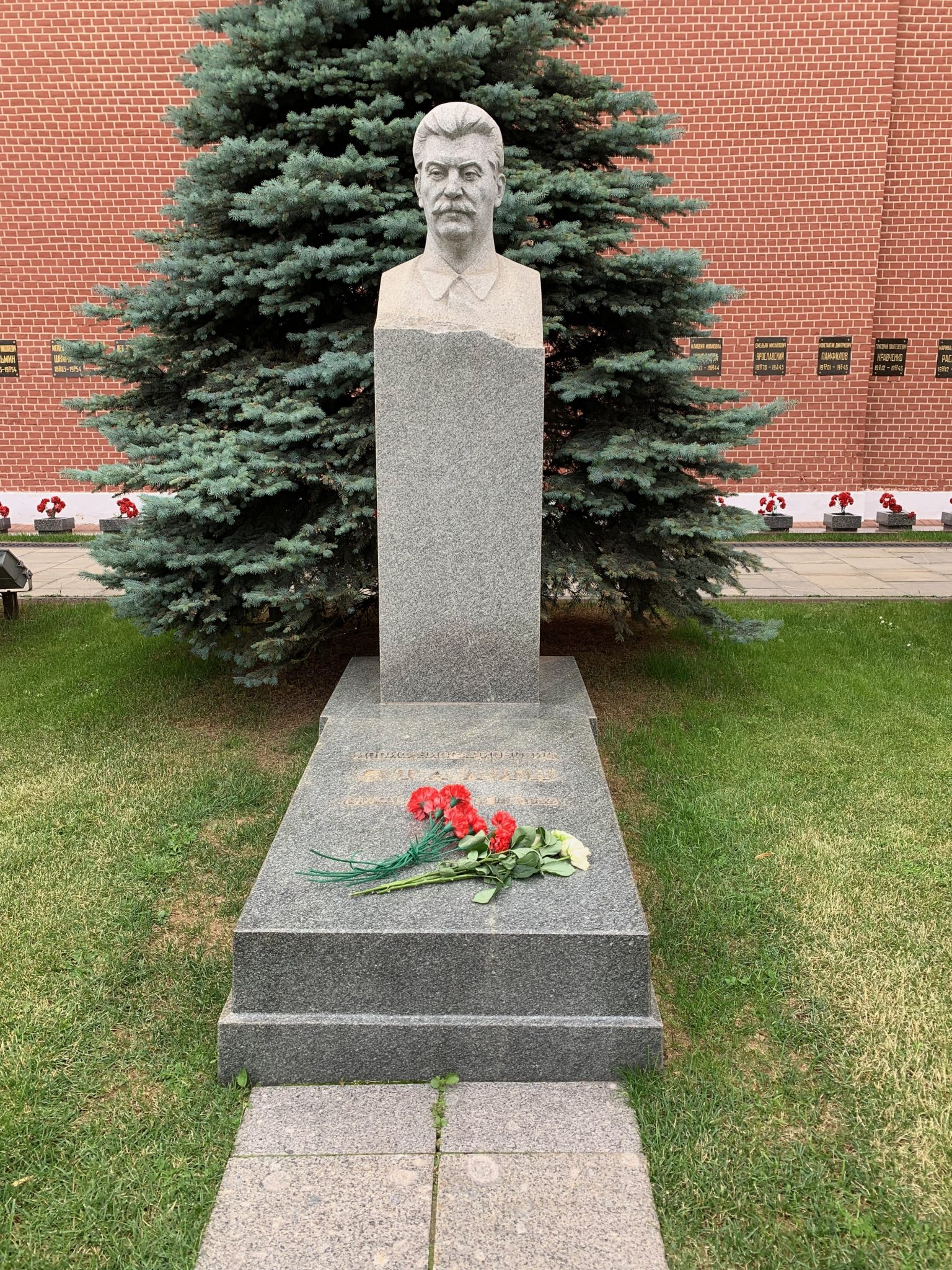 In addition to Stalin’s tomb, several other leaders of the U.S.S.R are interred in tombs there: Leonid Brezhnev (the fifth leader of the Soviet Union from 1964 to 1982), Yuri Andropov (leader after Brezhnev from 1982 to 1984), and Konstantin Chernenko (leader from 1984-1985). Nikita Khrushchev (the leader after Stalin from 1953 to 1964) is buried in Novodevichy Cemetery instead of in Red Square, as is Boris Yeltsin. 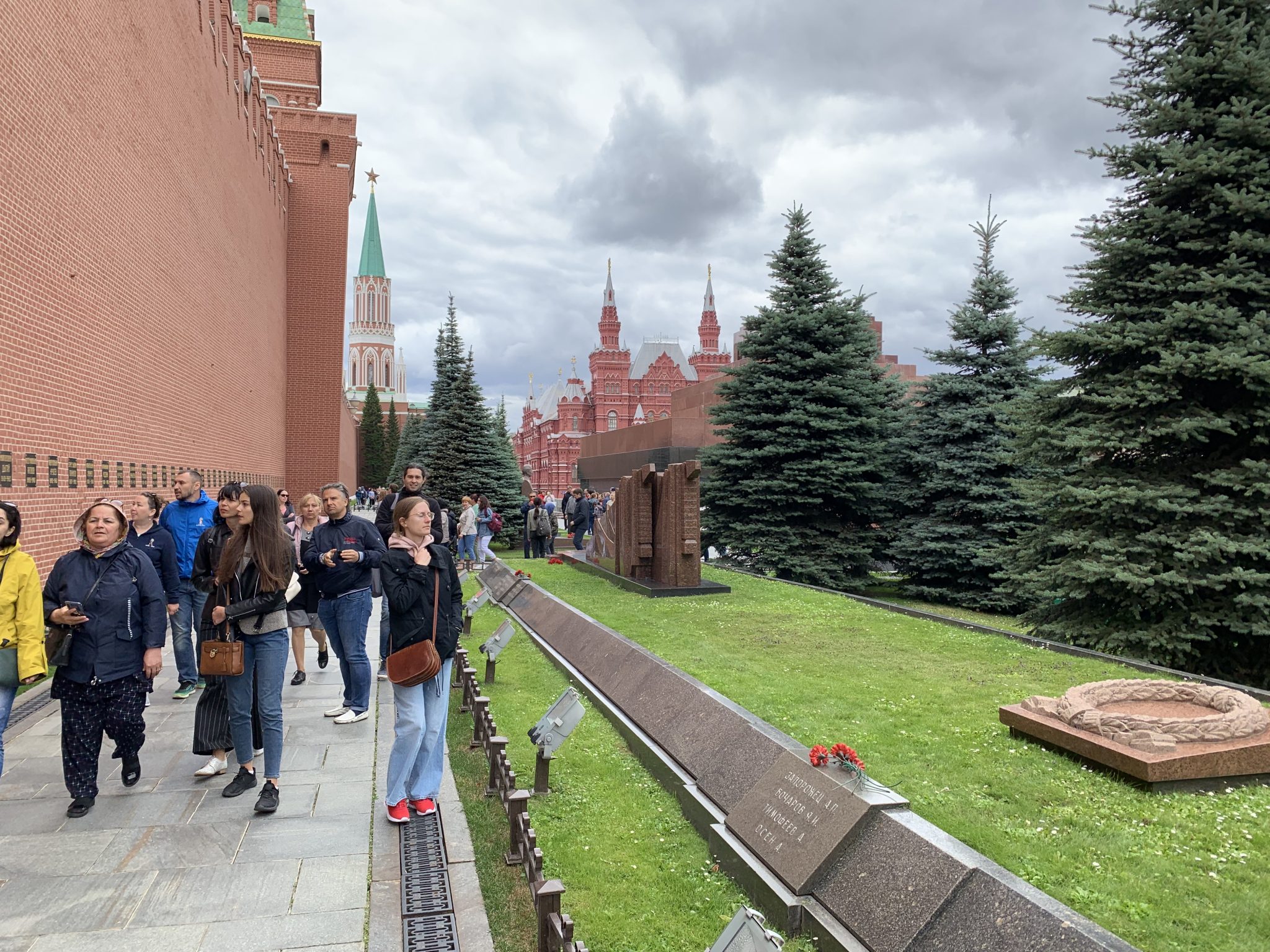 Cosmonaut Yuri Gagarin (first man in space) is interred in the Kremlin wall. More of the plaques can be seen in the picture below, looking out toward the exit. The last burial in the wall occurred in December 1984. 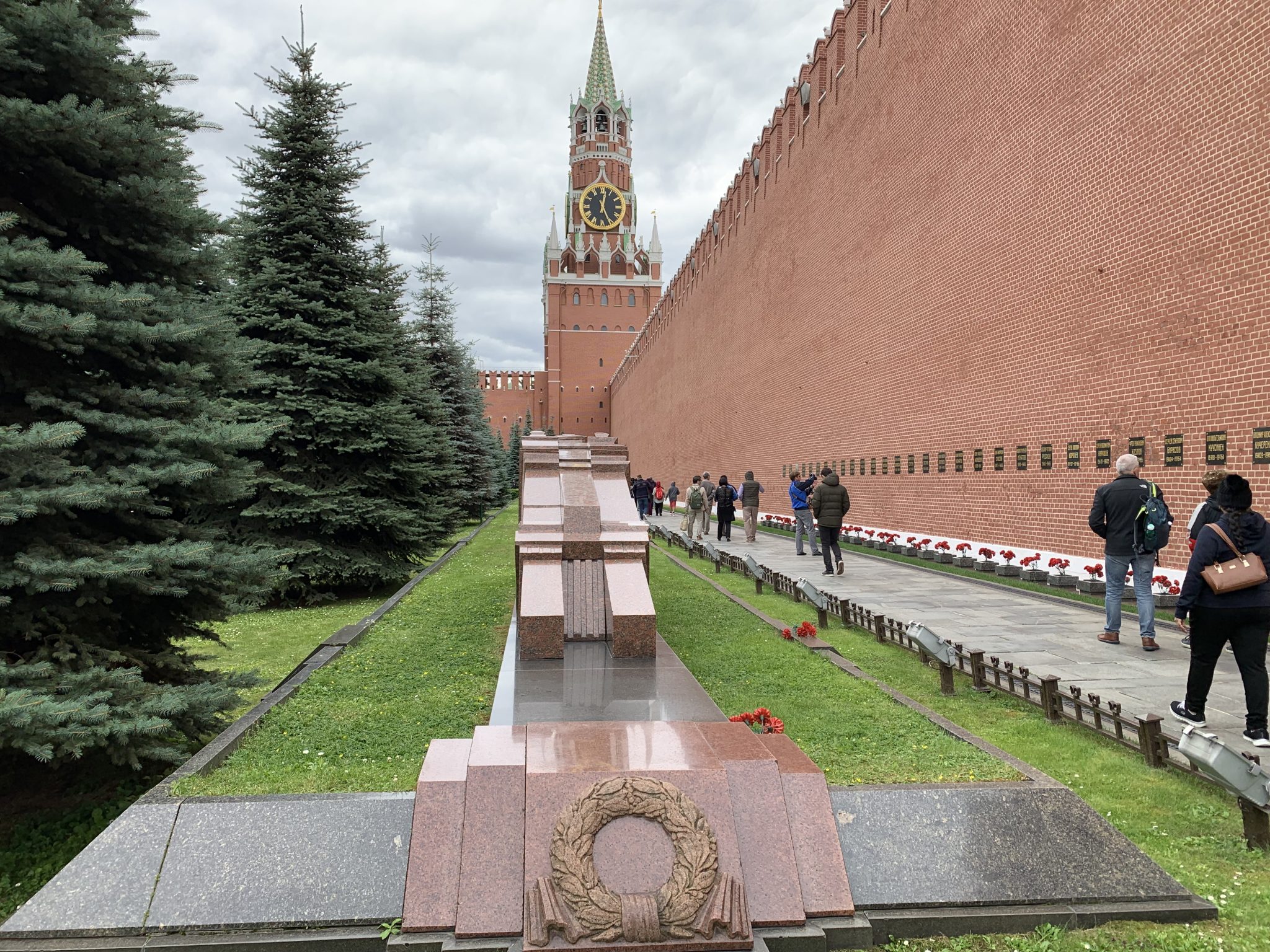 Fabergé Eggs and the Fabergé Museum in Saint Petersburg, Russia