Chocolate (the martial arts movie, not the candy)

The same director and martial arts choreographer who did Tony Jaa’s Ong-Bak and Tom-Yum-Goong worked on this 2008 Thai film, which, like Ong-Bak has a sometimes difficult to follow plot, great fighting stunts and an unusual martial arts character. 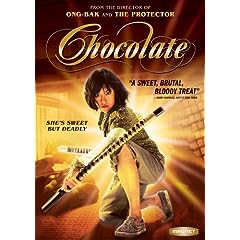 Zen (played by Nicharee “Jeeja” Vimistananda who was apparently discovered during auditions for one of the Tony Jaa movies) is autistic, her mother Zin is Thai, her father is a Japanese Yakuza gangster. Zin was formerly the girlfriend and money collector of a Thai gangster. Zin and Zen (yes, as confusing to watch with English subtitles as it is to type) hide in an apartment near a muay thai boxing school, where Zen begins to absorb and mimic their fighting style.

In excellent tongue-in-cheek, she also learns by watching both of the previous Tony Jaa films!

Zen has a knack for catching balls thrown at her without looking, and she and Moom (a homeless boy they take in? sometimes called Mike in the English translation) use that ability to make money when Zin gets sick with cancer. When a gang tries to take the money, Zen’s strange ability to learn martial arts kicks in. When the money is not enough for the cancer drugs, Zen and Moom stumble on Zin’s old money collection list and use Zen’s fighting to collect the money. Eventually they run into the Thai gangster again, and Zen’s father comes back to join the final bloody fight.

So, of course, as with many martial arts movies, try to get past the plot and the lack of Thai language knowledge/bad subtitles, and enjoy the choreography.

While not as athletic as the Tony Jaa moves, Ms. Vimistananda who plays Zen not only has some nice kicks (apparently trained in taekwando first, then muay thai) but she does the inside jokes very well.

In the initial fight scene, she does a Tony Jaa mimic with a high front kick (nailing her attacked who was standing on a higher level). Then there is an ice house scene where she channels her inner Bruce Lee, complete with his high pitched battle cry, his pulling-up-the-pants leg before kicking, and thumbing the nose. Good choreography but funny.

The final battle, while long and drawn out, is well choreographed though realism, as always, takes a seat. Several of the opponents who were shot, or beaten or kicked get up to fight again and again and again. In the end, Zen’s Japanese father comes back and pulls a sword, and she even is pitted against a boy who is also autistic. Good, enjoyable fight scenes, strange (to this American) plot.

Mine and my son’s most anticipated movie of 2009