My grandfather was in World War I. Luckily as an American, trench warfare was mostly complete by the time he got into action. I’ve listened to Dan Carlin’s riveting podcast on World War I, Blueprint for Armageddon, with visions of how surreal and horrifying the fronts in World War I might be like. I had a chance to see a different version of that reality when I went to War Remains, a virtual reality experience narrated by Dan Carlin. The show or exhibit was running on 5th street in Austin, starting in August 2019 and continues through mid-October. Tickets were $40, with taxes and fees taking the price to $53. 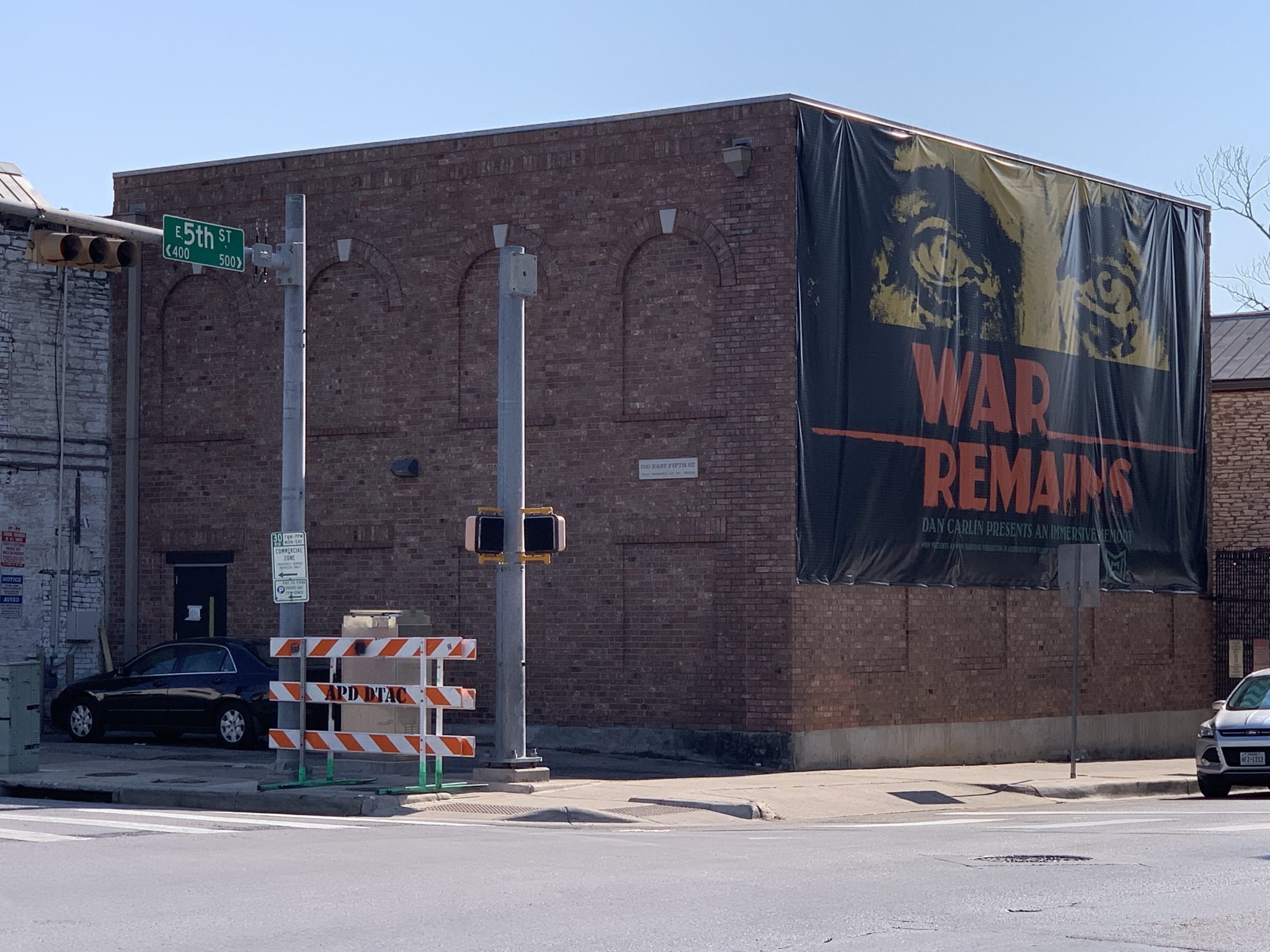 Entry tickets are timed, stating no late entry. When we arrived, the gate was locked but the entrance was well decorated. My ticket was for 6:30pm. There were two people waiting for that time period as well. A gent came out at got us a few minutes before our time. 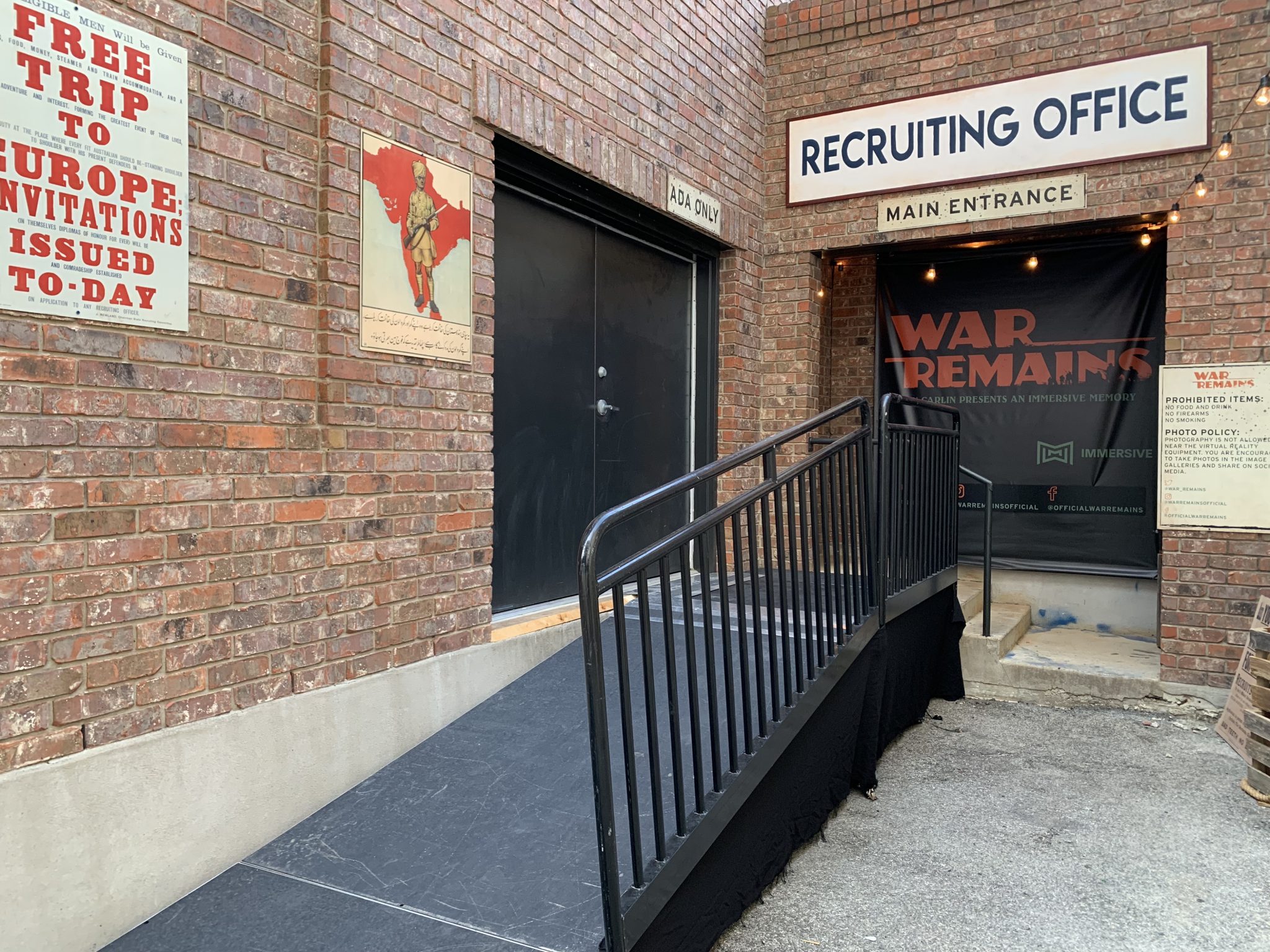 The exhibit requires standard injury waivers. People are sent through one at a time.  There is a welcome area decorated with posters (labeled that they are from the Imperial War Museum). And yes, they had a segment of Dan Carlin’s Blueprint for Armageddon playing on the fake Victrola. 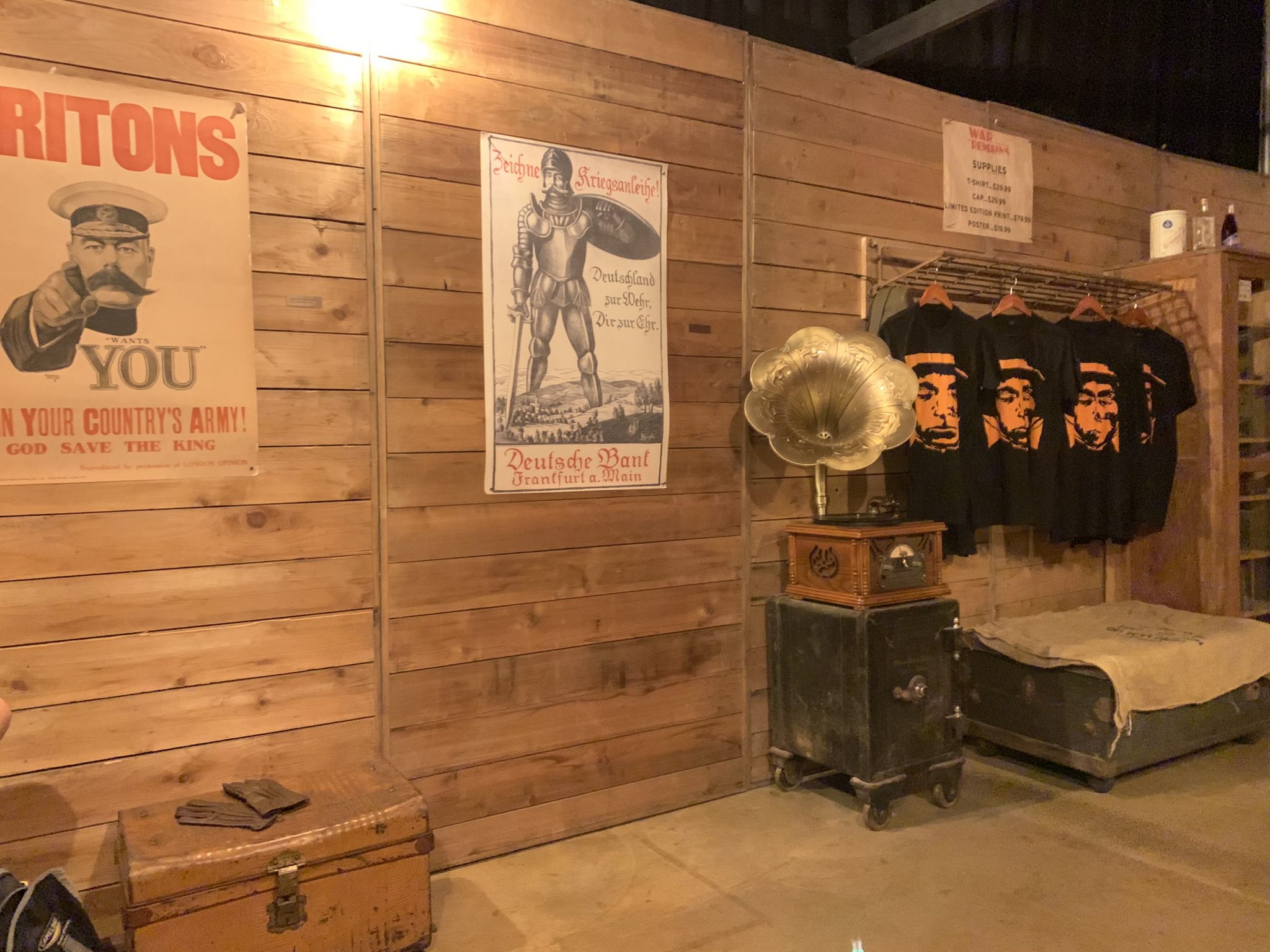 The gent in the welcome area told us that they were originally only supposed to be here one month, but that it had been extended due to demand. He also commented that several people had come back multiple times. I’ll most likely be in that number, as I want to bring my son to see it.

No photos are allowed inside where the VR equipment is in use. When it is your turn, you enter through a black curtain, sit on a stool and the VR headset, earphones and over-the-shoulder battery pack are put on. You are instructed to look a couple of places to double-check that the equipment is working, and then told to follow the soldier. They post on their web site that “in-virtual reality time is 12 minutes.” Due to a couple of technical snafus and the fact that no one else was behind me in the 6:30 time slot, I was in there for just under 30 minutes. Bonus! The technical snafus I encountered were a complete freeze of the VR playback. The two gentlemen in the room could see it, and quickly and happily replaced my headset – then asked if I wanted to re-start or where would I like to be placed in the program (inserted into the MATRIX!). I asked them if that was a normal occurrence and they told me I had just set the record for freezes. Woo hoo!

If you are interested in doing this VR exhibit, I’d suggest you skip the description below – it would be much better to see it fresh.

While lightning (or explosions) flash in the background, Carlin sets the stage for World War I. If you’ve listened to his podcast, this is similar but more succinct. If you haven’t, it’s a good introduction to what made World War I so different.

Eventually a soldier appears. You get up off the stool and follow him until the next scene appears.

Because of the technical issues described above, I got to experience the balloon simulation three times. The balloon basket moves, fans blow wind at you, and you can look up, down, and all around – while Carlin talks about the technological changes that made World War I so bloody. There are several balloons all around, and eventually fighter planes of that era – demonstrating Carlin’s point. One of the balloons gets shot down. I was waiting for that to happen to the one I was virtually in! The basket is physically touchable, but the ropes that lead from the basket to the balloon are virtual (at least I couldn’t touch them). When my headset froze and was removed to change it, I could see the basket. It was nothing more than four walls that were slid into place once the participant had entered, on a platform that could be rocked. It was obviously quite different with the headset on.

In his description, Carlin goes through several of the battles. He ends up on Paschendale and the rains before and during that battle, which I assume is what the next few segments were modeled upon.

Again before of the aforementioned technical problems, I was able to experience the start of this trench view a couple of times. Bullets fly over head, and to your left you can see into an open trench. The soldiers there duck down, waiting for a time the perceive it is safe to go over the top. As you watch, they attempt it – and most of them are shot down before they get out of the trench.

I watched this segment many times, and I’m sure there were things going on that I missed. The atmosphere is loud and hectic, as one would expect.

To the right is a lookout periscope, which shows a small view ahead of the trench.

The soldier appears and takes you through a door into a covered area.

A soldier is on the floor, cringing with every simulated artillery explosion. He rushes out the door but it closes behind him (the folks that worked here were very insistent about not pushing on the VR walls or doors – apparently some weren’t there in real life and some of the objects that were supposed to be solid in the VR world weren’t steady IRL). You are stuck in a small wooden room which is rocked by constant explosions. The simulation is only in this room for a few minutes, but Carlin asks you to ponder what it would be like to be there for 24 hours – as some were.

In an open trench

This is by far the bloodiest and busiest section. The door opens, and the hand and arm from a dead soldier is the first thing you see, hanging from part of the works above. This section of the trench has been blown out. Tanks go by on both sides, pushing through mud. On the side that has been blown out, the deep puddles and mud that were a part of Paschendale can be seen. There are lots of dead soldiers, with very nasty wounds. They don’t look life-like of course, but realistic. There are live soldiers too, crouching behind anything they can find and returning fire. The walkway here appears to have slats missing; even though you know it’s probably solid in real life I for one stepped over the virtual holes. Again, I’m sure there were things I missed here, as there were things going on in every direction.

Eventually the floor starts to feel like it is moving up, the battle fades and some of the balloons pass by (to further the sensation of rising). Lots of shells seen to fall from the sky, as Carlin reminds us that the leaders of later eras experienced this first hand.

After the VR gear is removed (I asked and was told it was an HTC Vive), you exit through another black curtain into a room with more posters and a sign-in book. Looking back the room that I walked through with the VR gear on was really small – and of course, one story. 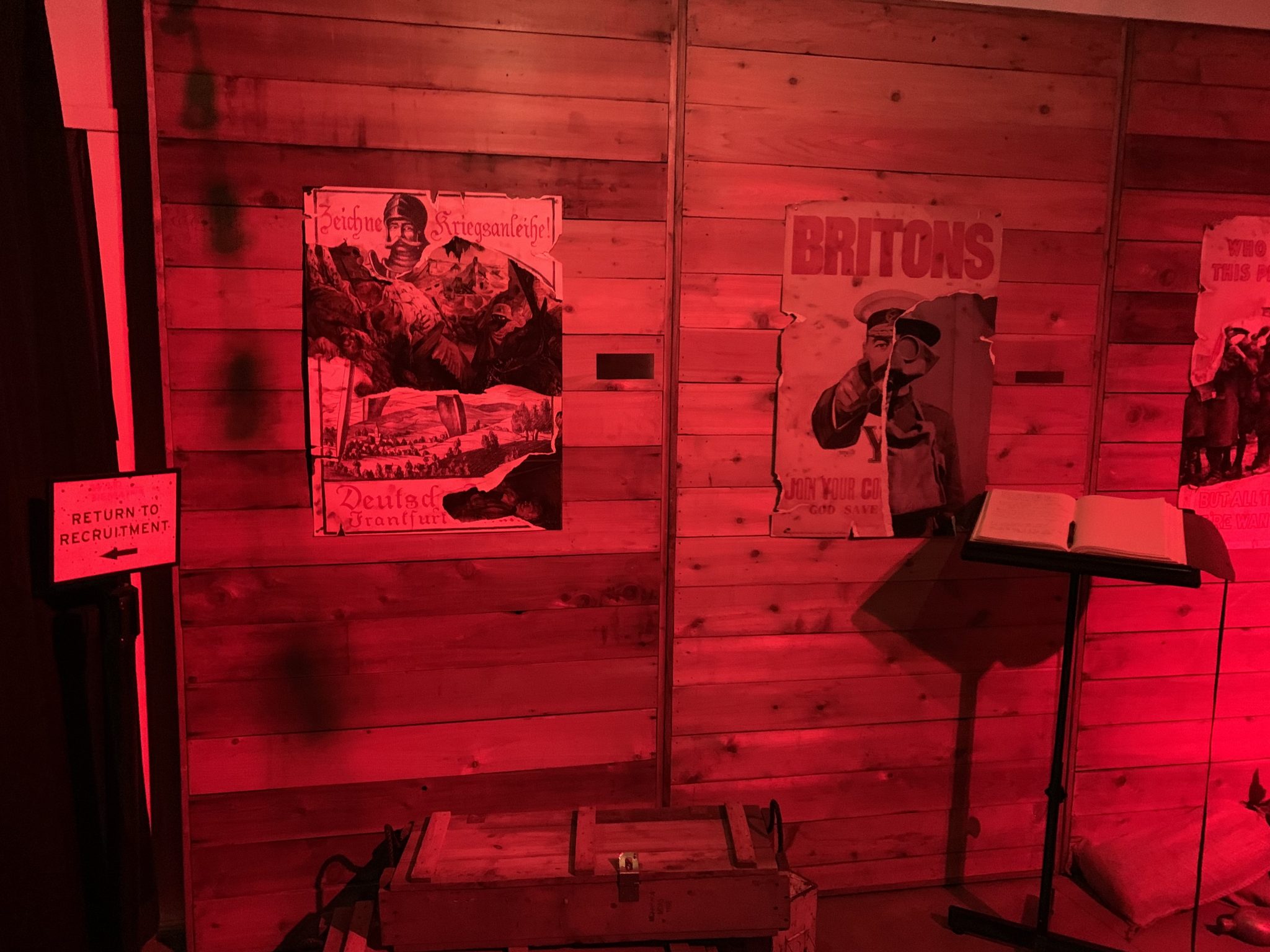 And, of course, a poster with a quote from Dan Carlin. 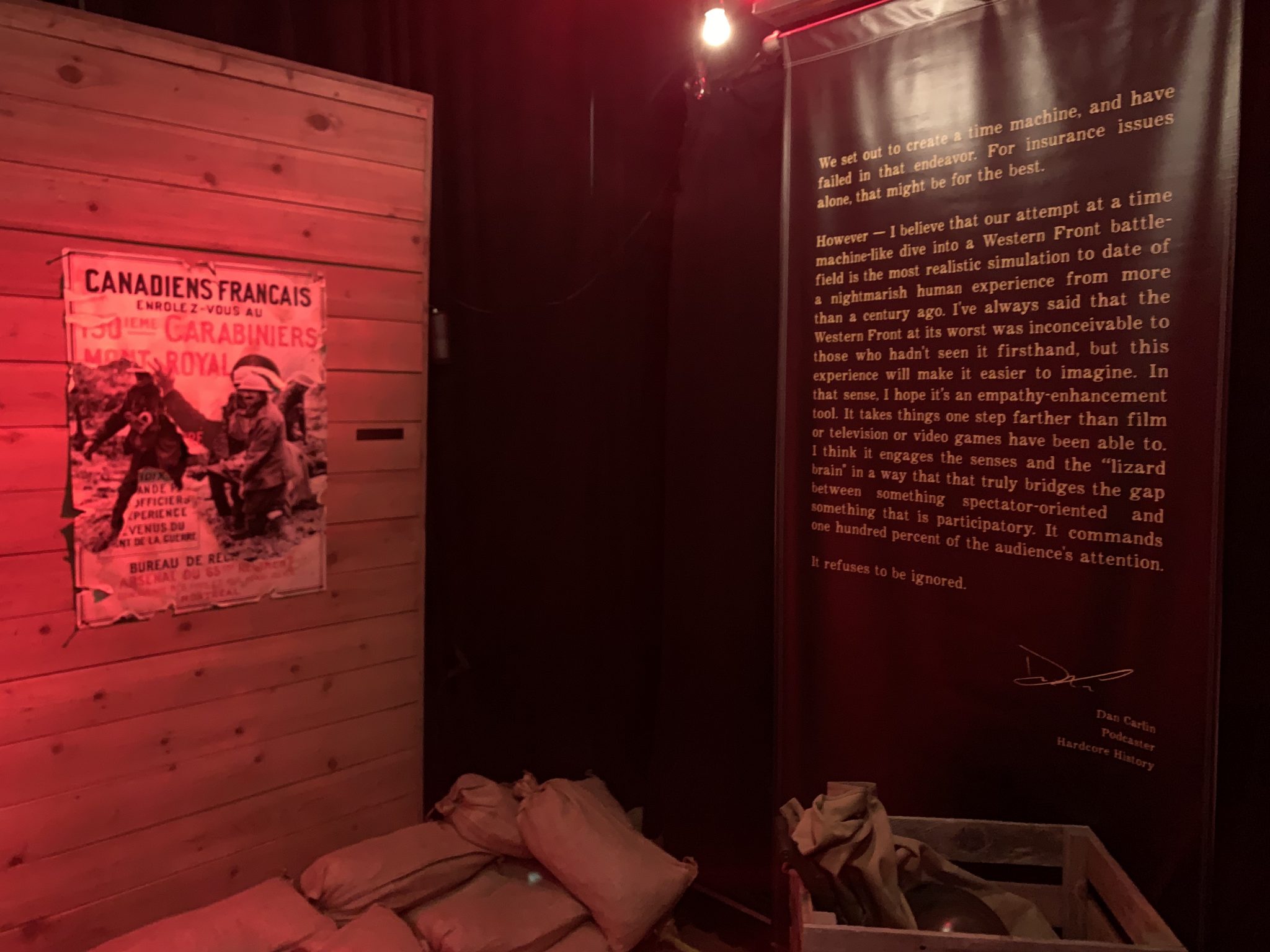