My grandfather was in Company B of the 132nd Machine Gun Battalion in World War I. I wrote an article about letters he sent back previously. I also had a roster book for his company which, in May of 2013 I donated to the outstanding National World War I Museum and Memorial in Kansas City. At the time, I did not take pictures or scan the pages of the booklet, and due to the previously mentioned article, I have been contacted by people asking if their relatives name appeared in the roster book. On a recent trip to see best friends Vercie and Lisa, and to see the Green Bay Packers beat their Kansas City Chiefs, I fixed that mistake. Many thanks to Jonathan Casey, the Director of Archives, for setting up the book so I could photograph it. And lots of thanks to my friend Vercie and my gorgeous wife for gently holding this old roster book gently open.

The book is only a few pages long, but there is so much history embedded in it that I will put full-sized photos of each page here (and send back to the museum).

There is no date stating when this book was printed. One would assume it was after the war was over and the Company released. My grandfather made it back to the states in May 1919 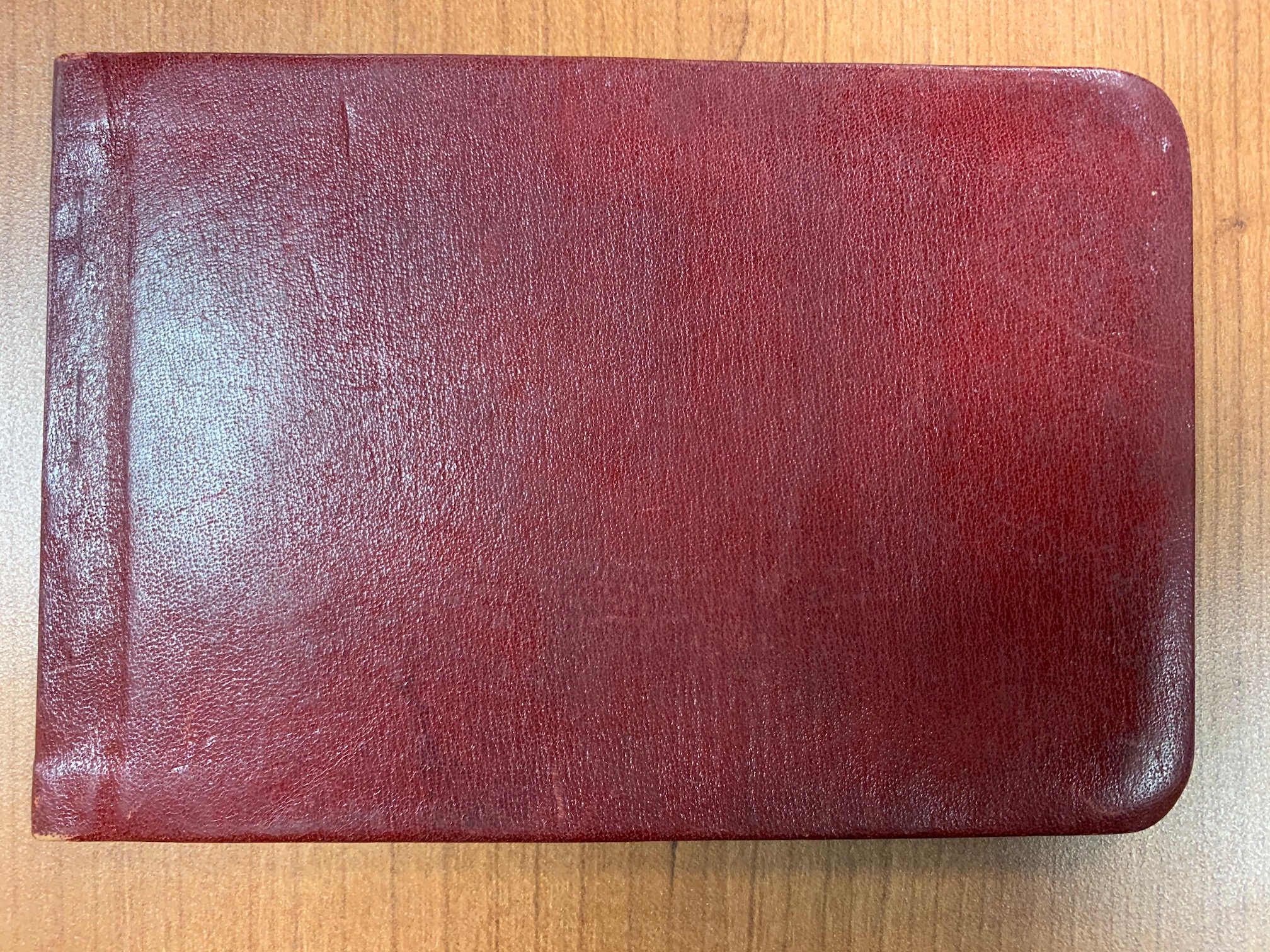 This is a list of those killed in action or dead of disease. Thankfully it is a short list with only five names listed. 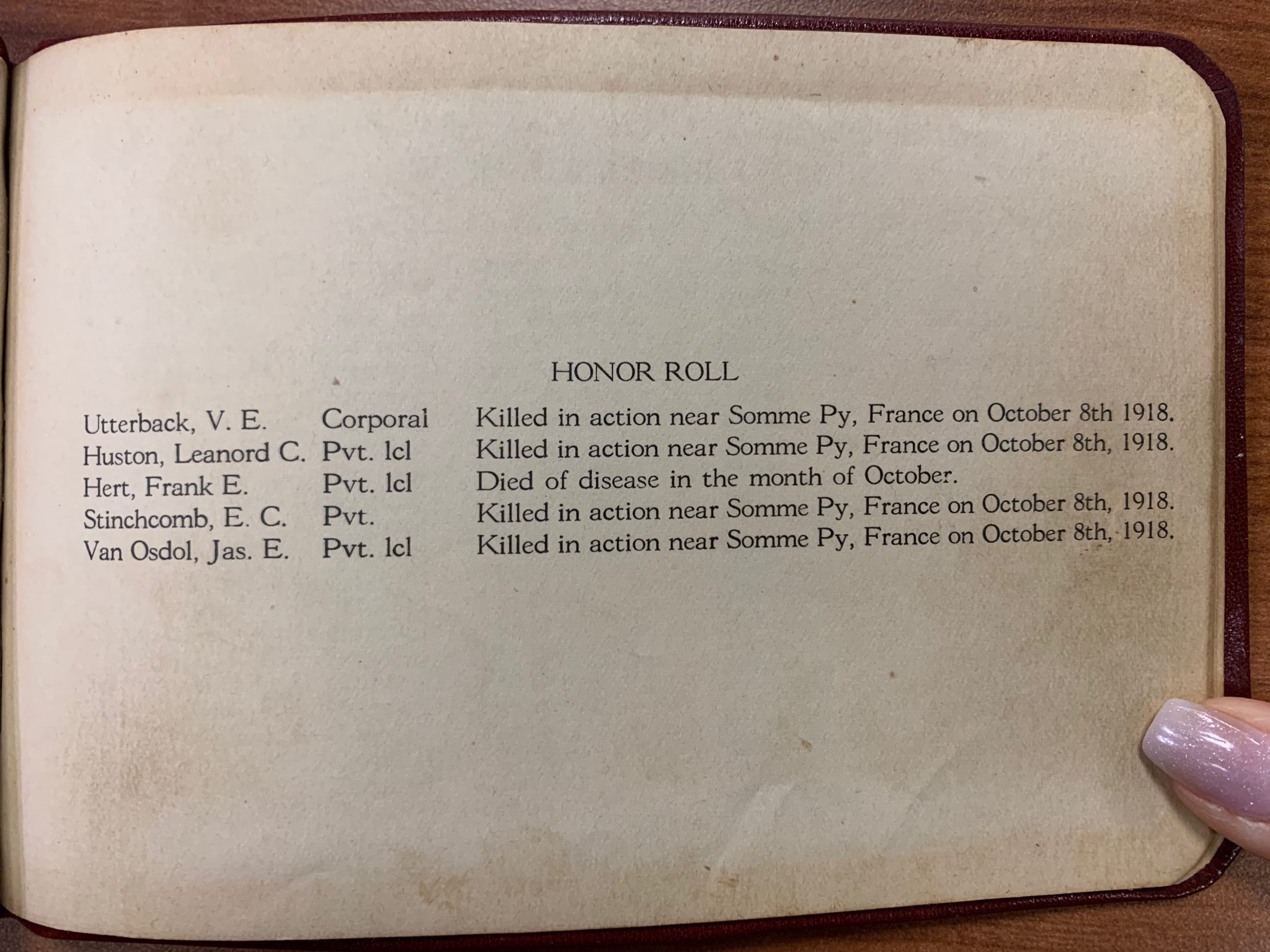 Enlisted with Rank and Address

There are seven pages (and a bit) of enlisted men, sorted by rank and then alphabetically (at least most of the time). There are 181 names listed. My grandfather, Corporal Ellis Edmond Ketchersid, is listed on the second page of this list. The list included the city, state and in some cases the “Street or RFD” address for each man.

The 132nd Machine Gun Battalion was part of the 36th Division, First Army in World War I. The 36th was called the “Texas-Oklahoma” Division, but as can be seen in the list of City/State pairs there were men from other parts of the country . 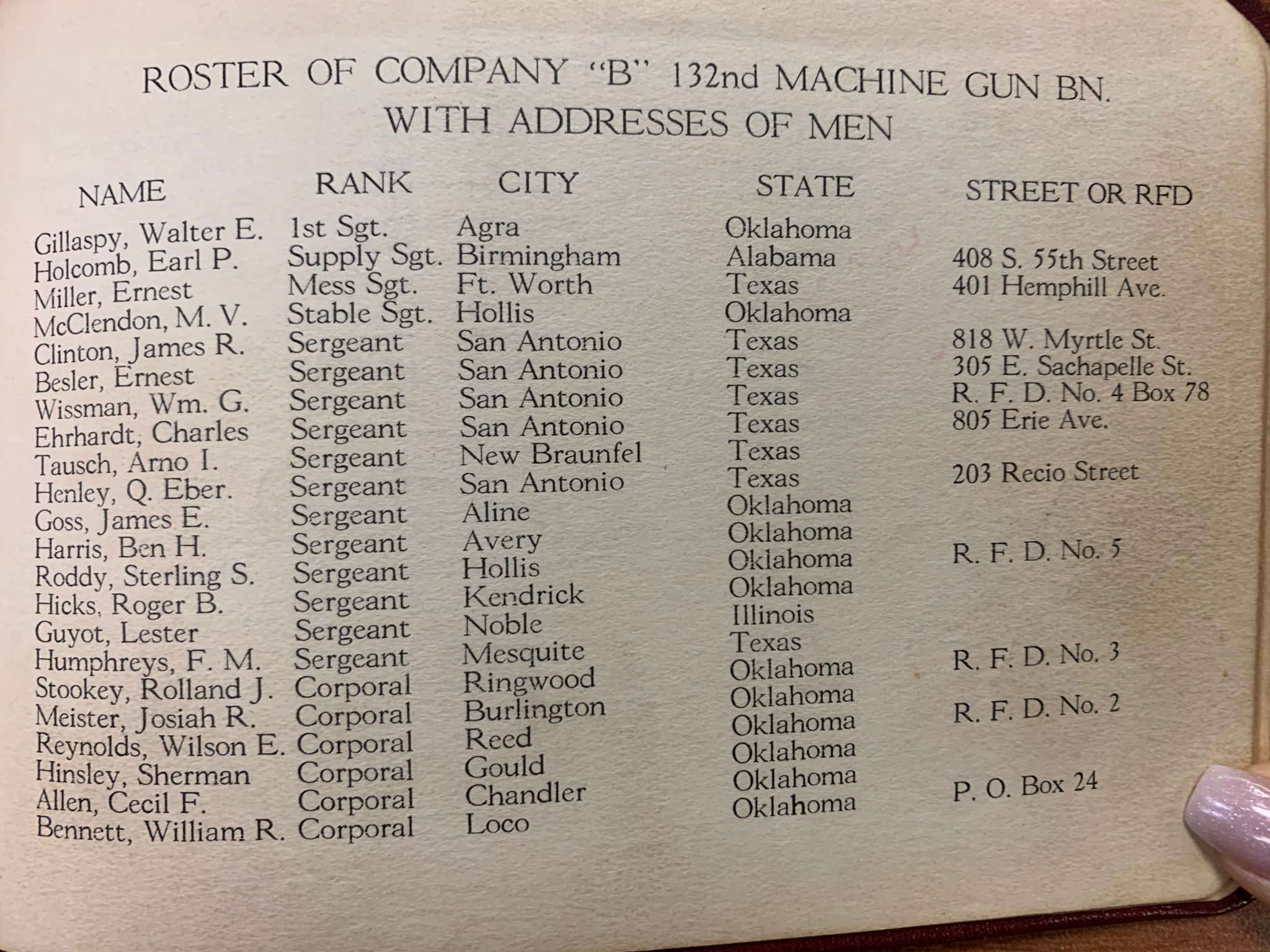 There are 16 Corporals listed, including my grandfather. This next page of the roster includes three cooks, three mechanics, two buglers, a horseshoer and a saddler. 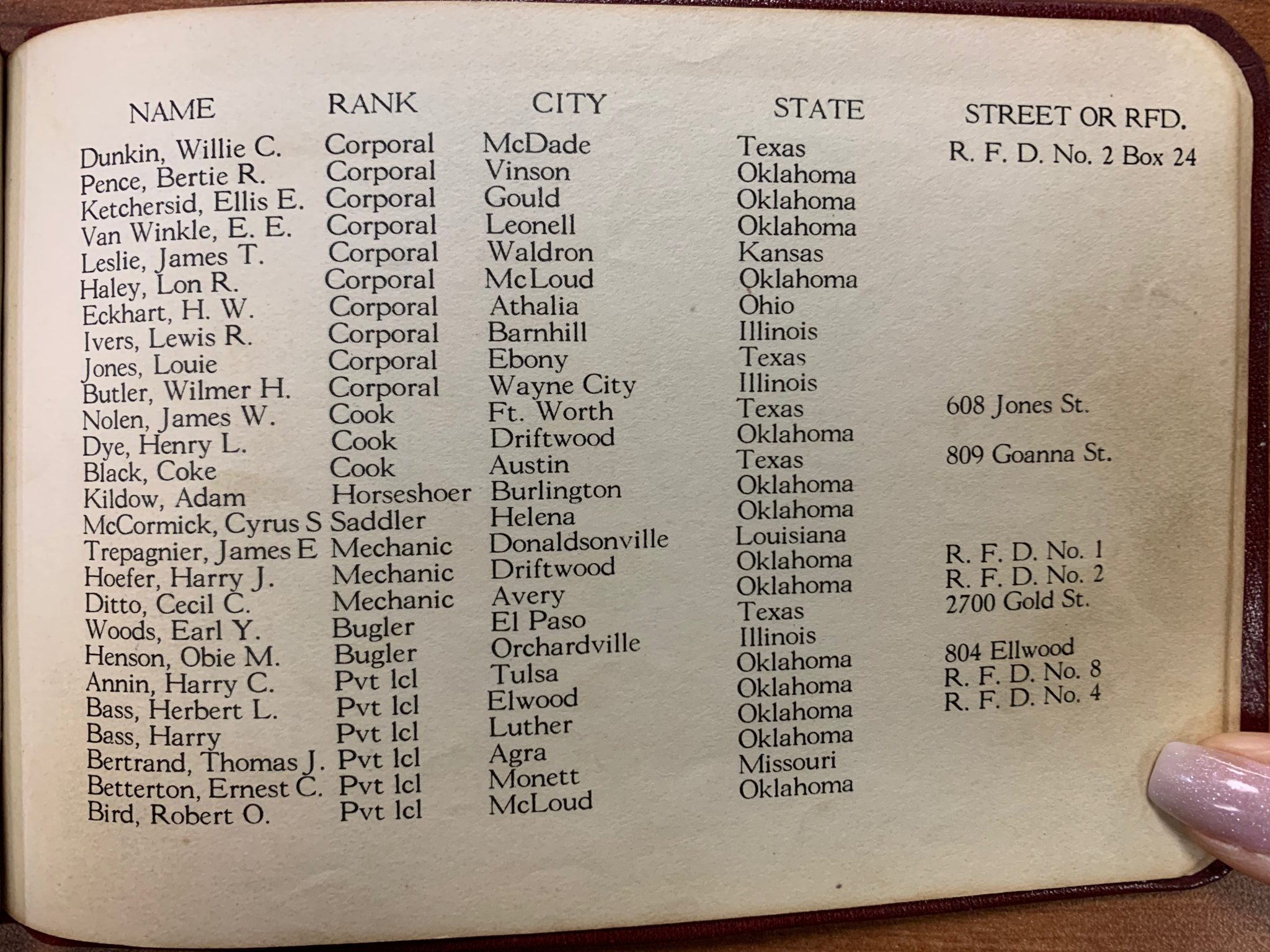 The previous page and the next two list 45 men with the rank of Private 1st class. 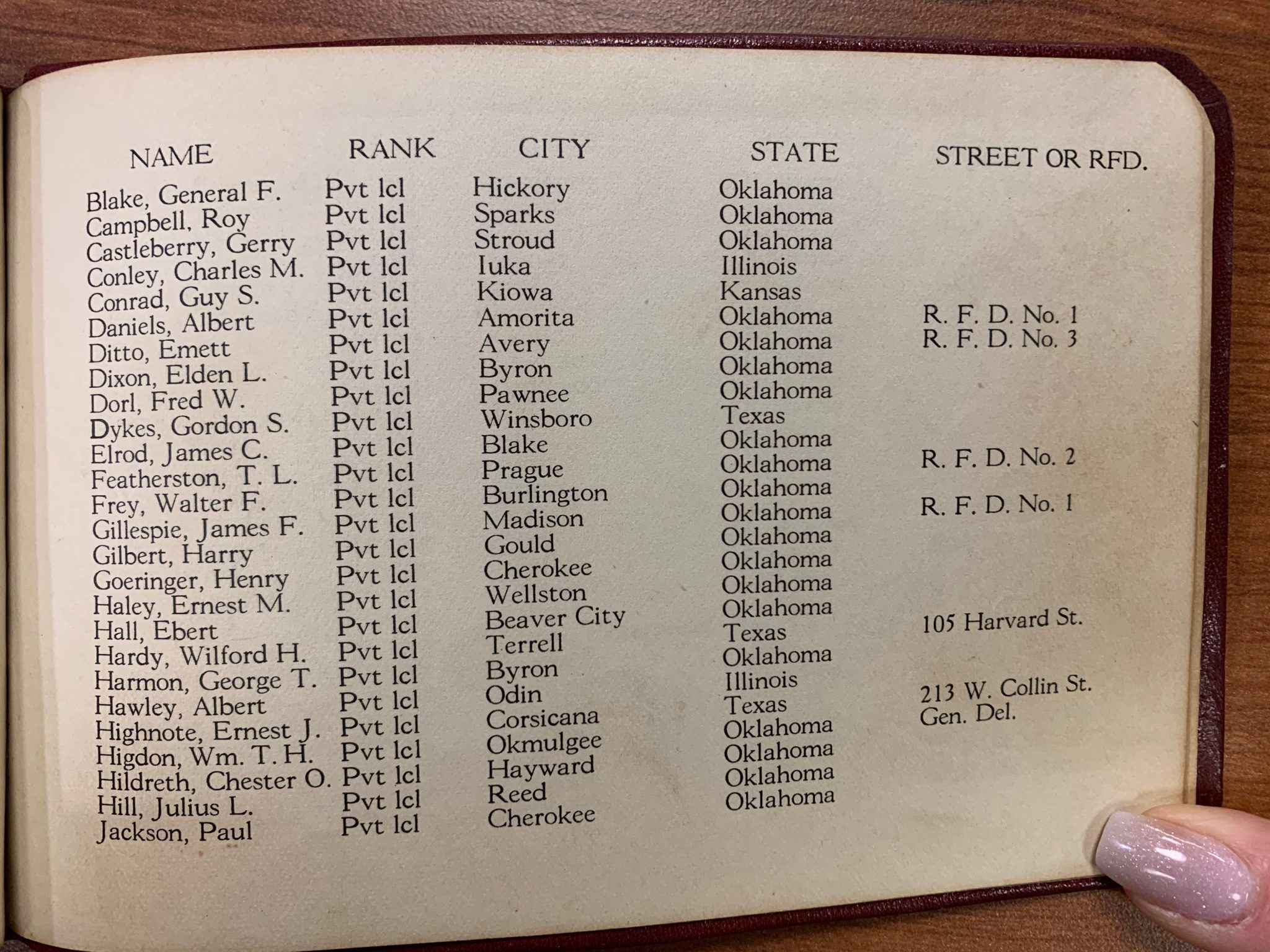 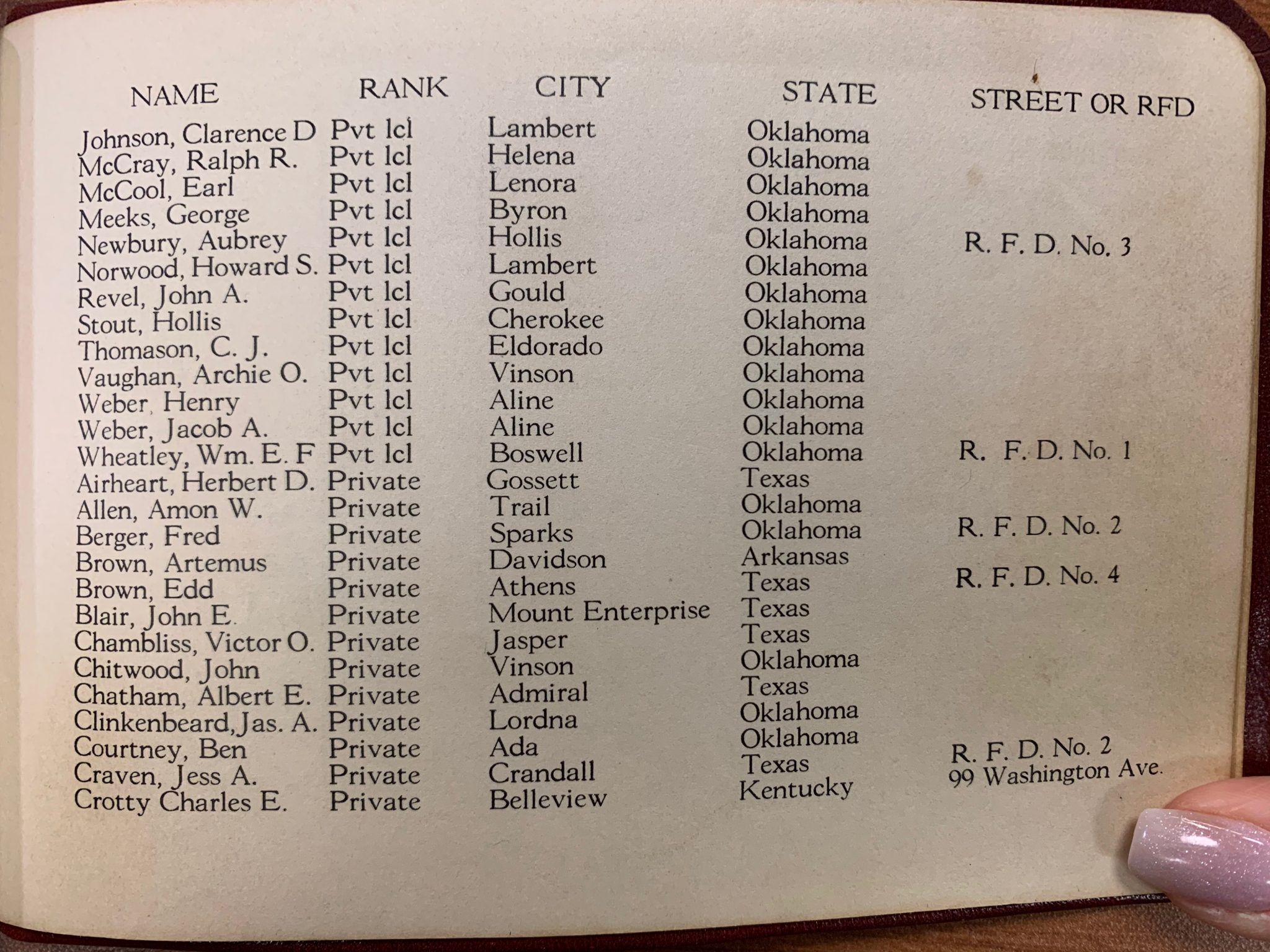 There are 94 men listed with the Rank of Private, including many from outside Texas and Oklahoma. 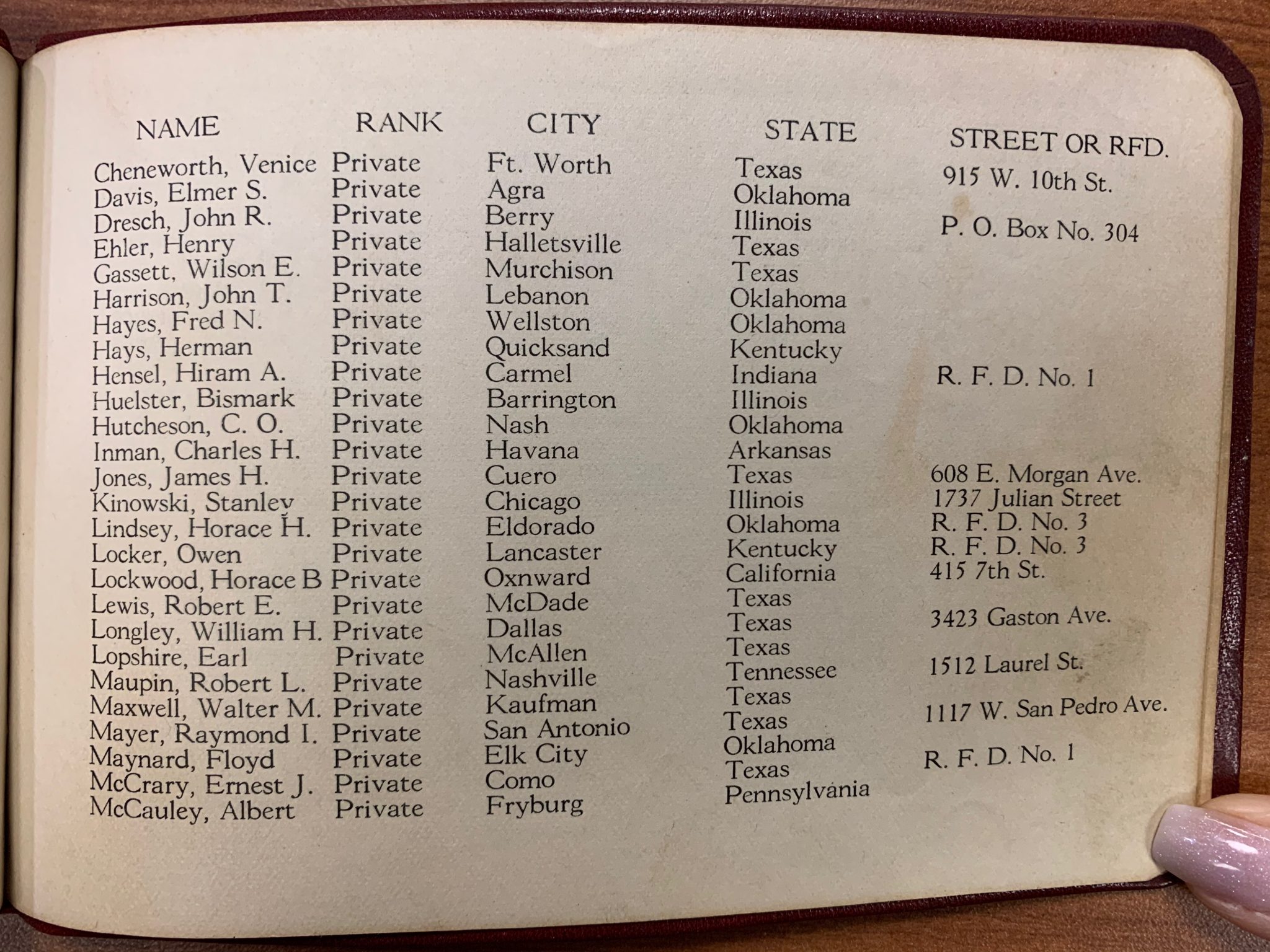 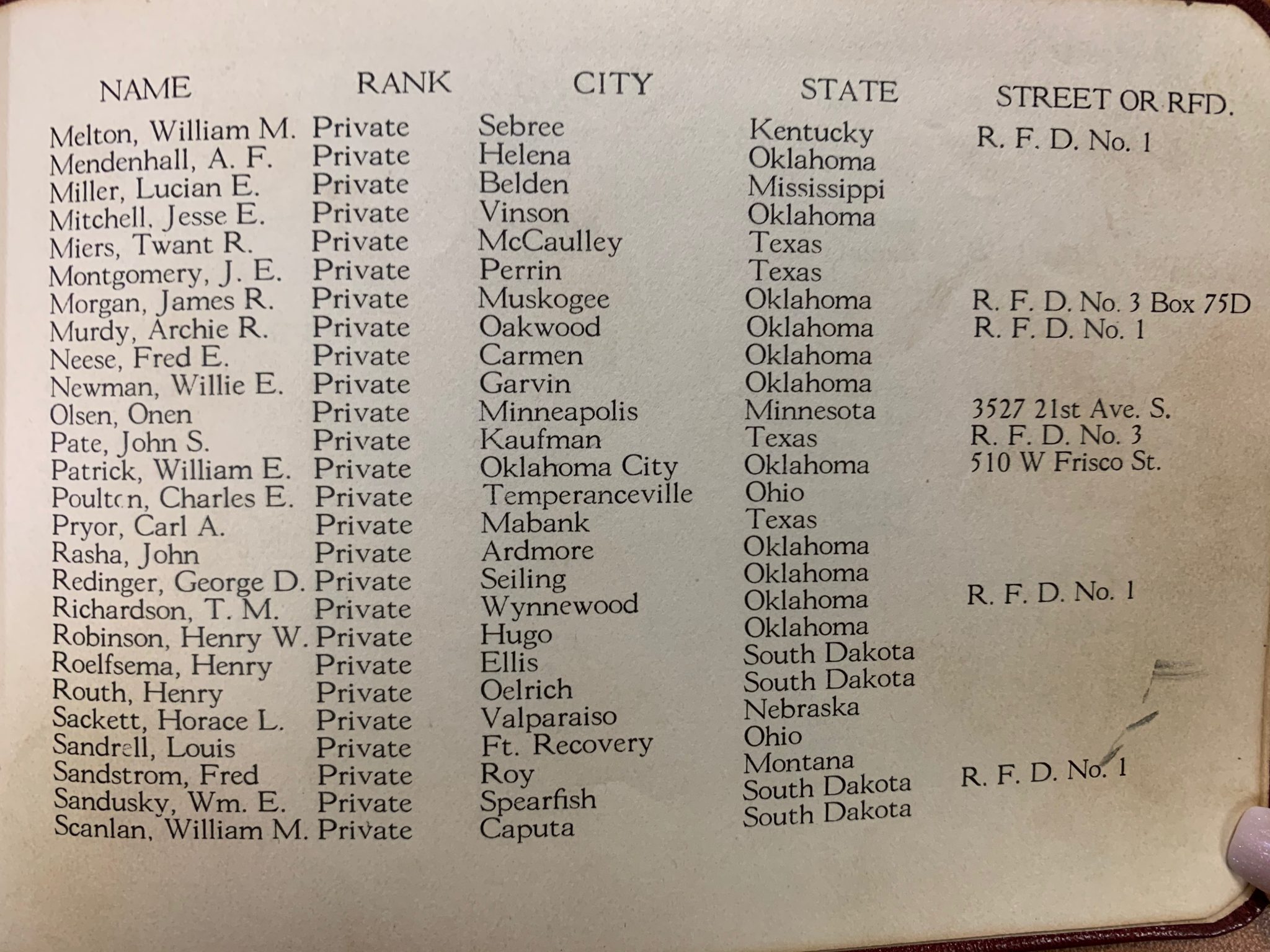 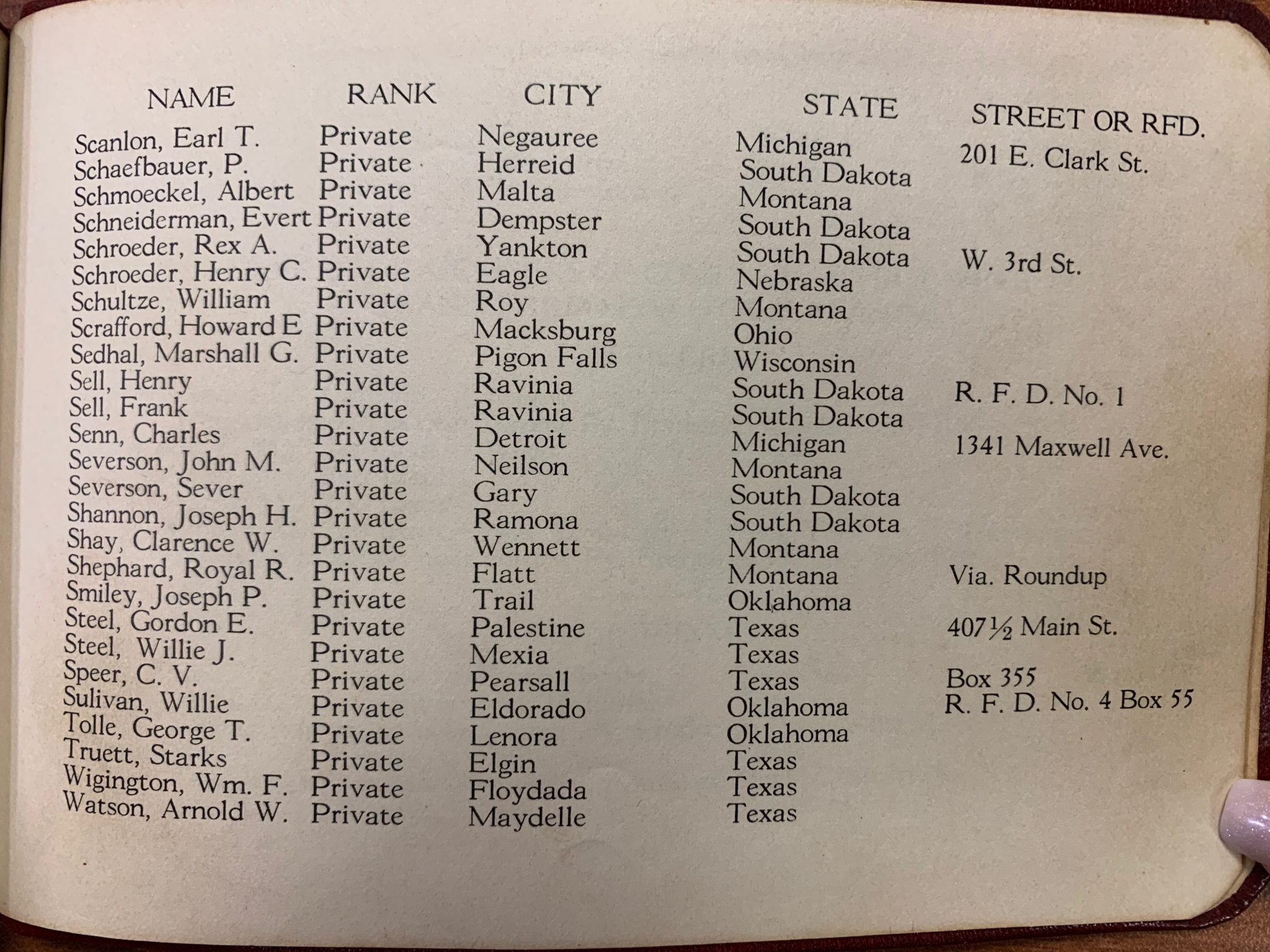 The next three pages in the book list those members of the 132nd Machine Gun Battalion who have been wounded or transferred for other reasons. If the roster is accurate there were 5 men killed (from the initial page of the roster book) and 18 wounded, all in “action near Somme Py, France on October 8th 1918.” 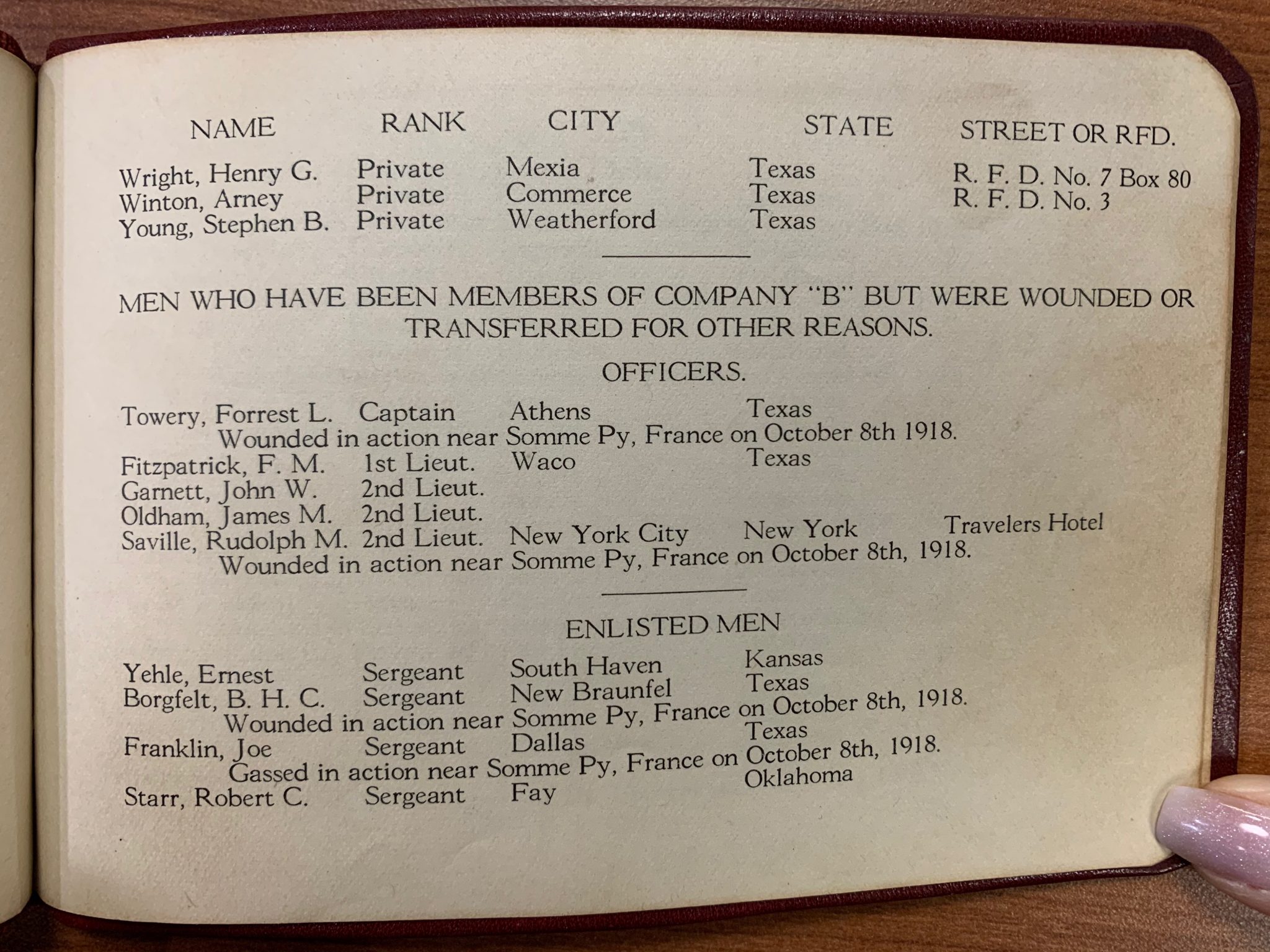 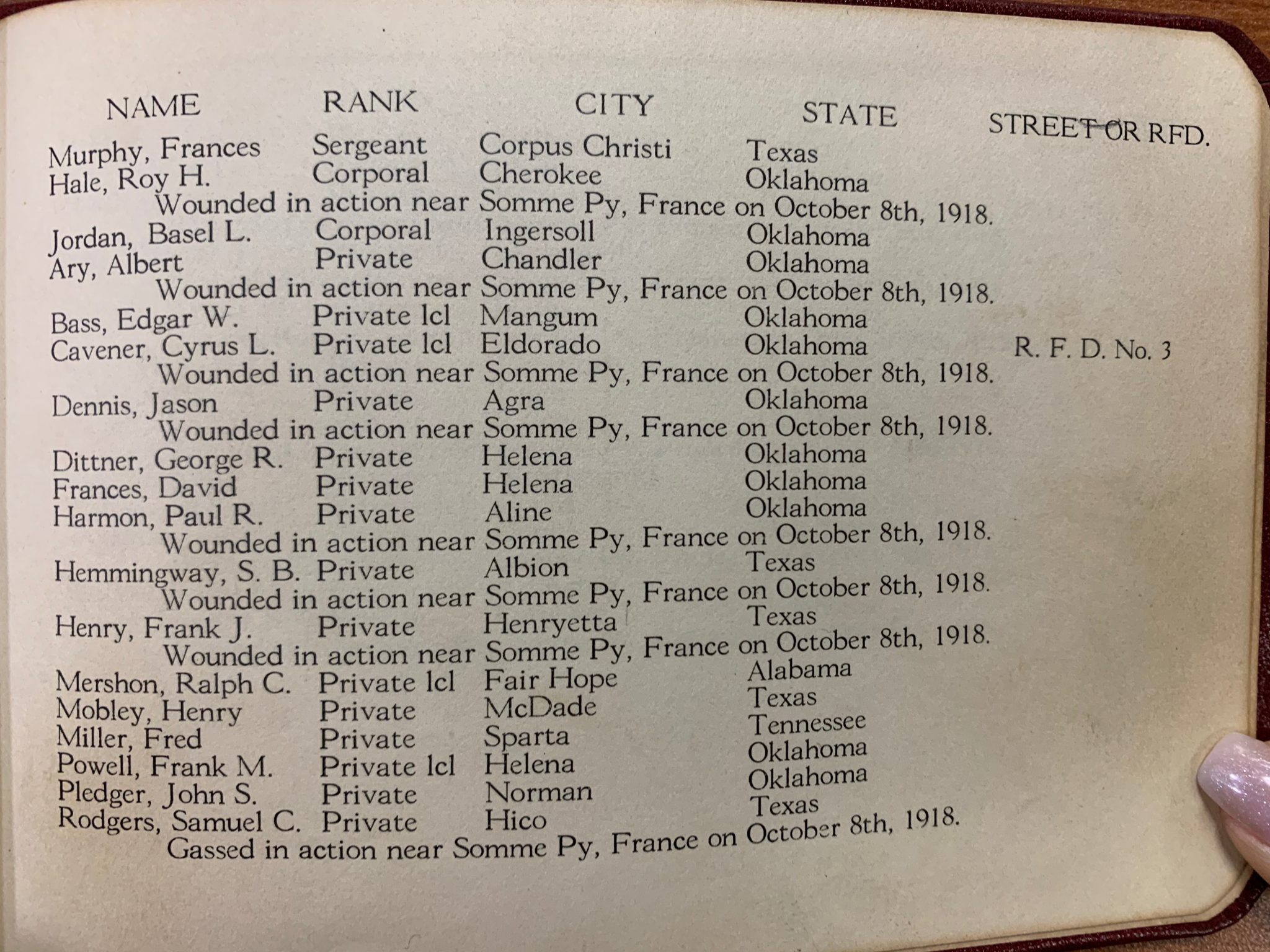 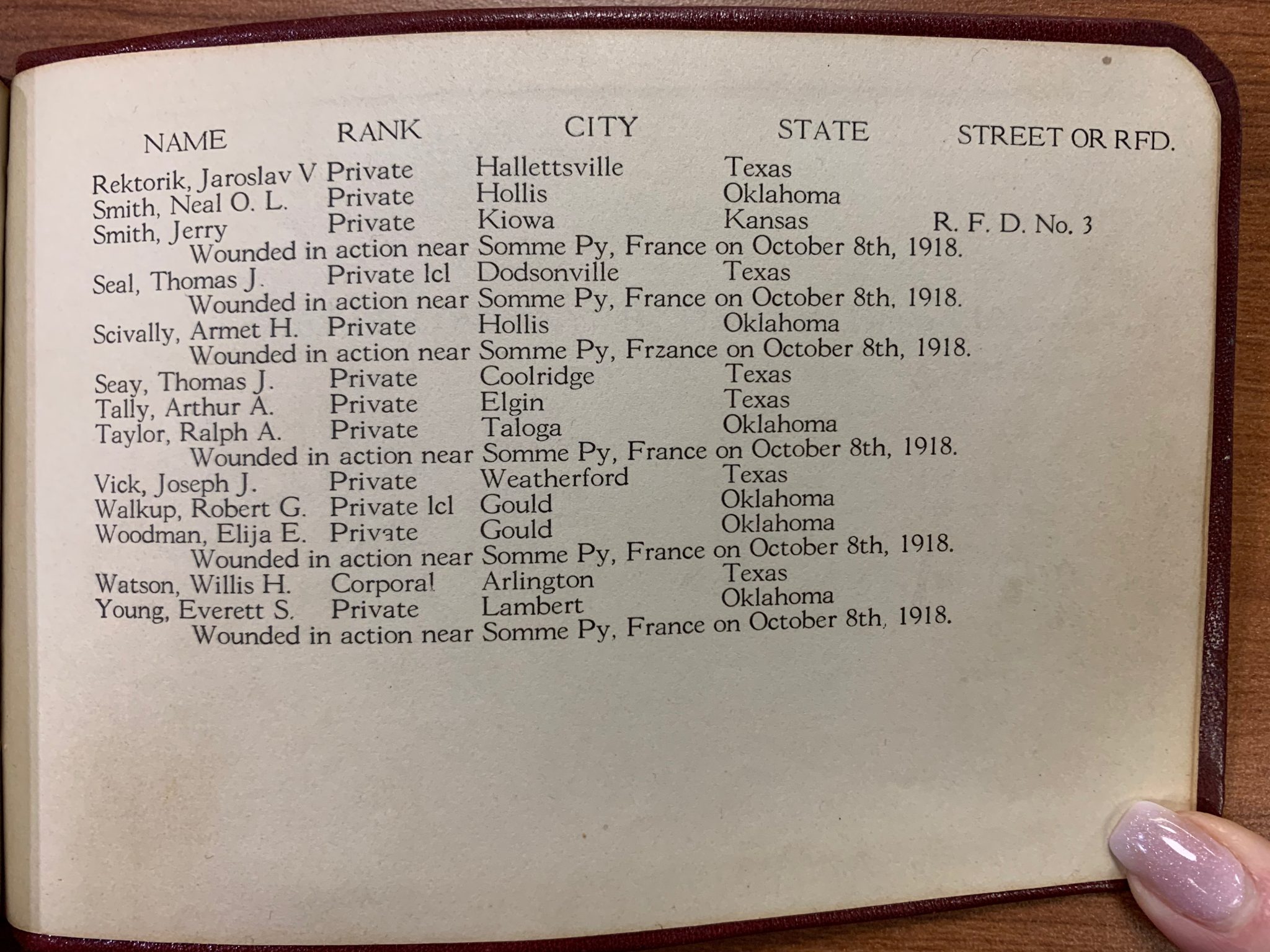 The 132nd Machine Gun Battalion shows its roots with the Captain and one of the 1st Lieutenants being from Texas. 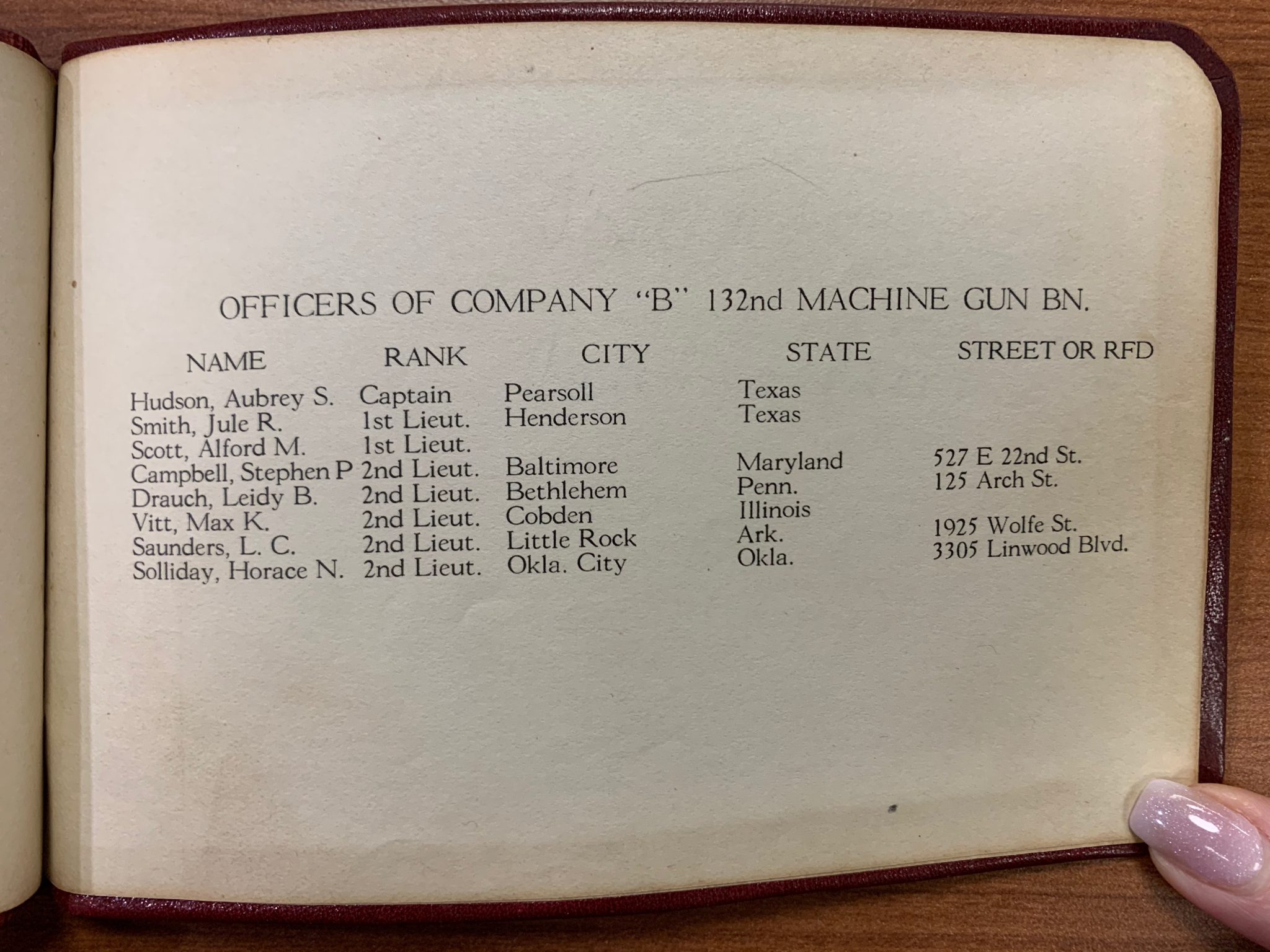 There is a Private 1st class Paul Jackson listed in the roster book. I have to assume my grandfather got this roster book from him, based on this inscription at the back. 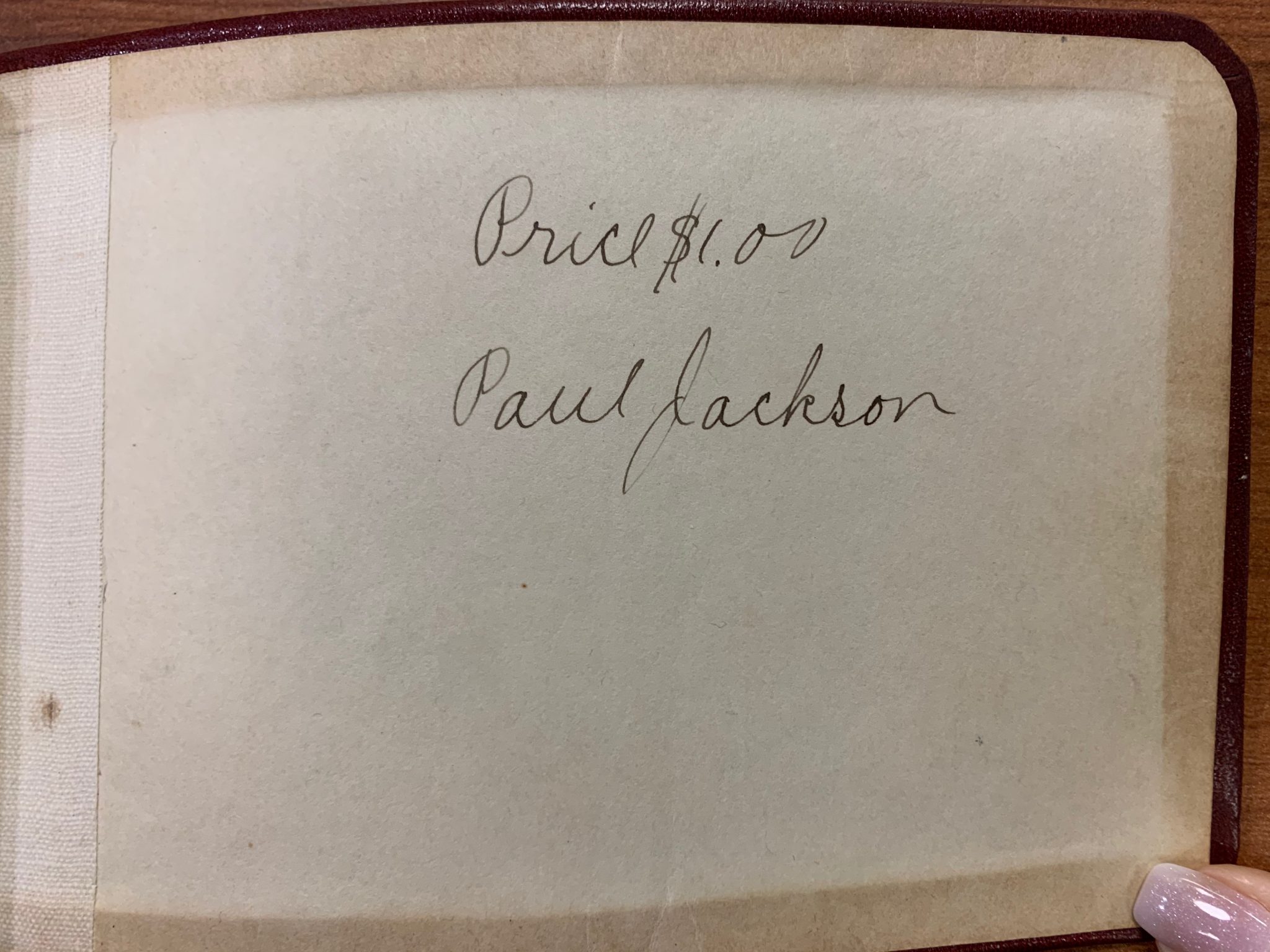