Bonaventure Cemetery is a ten minute drive or ride from the Savannah Historic District. The carved gravestones, sculptures and preponderance of Spanish Moss give this place a classic cemetery look. The cemetery is open 8am to 5pm every day, and the office is usually staffed with docents from the Bonaventure Historical Society starting at 10am. The conversation with the docents and the 3D “birds-eye view” map of the cemetery is worth a donation to the Historical Society.

We visited on a Sunday in July starting around 9am, and the breeze through the trees made for a very comfortable visit. 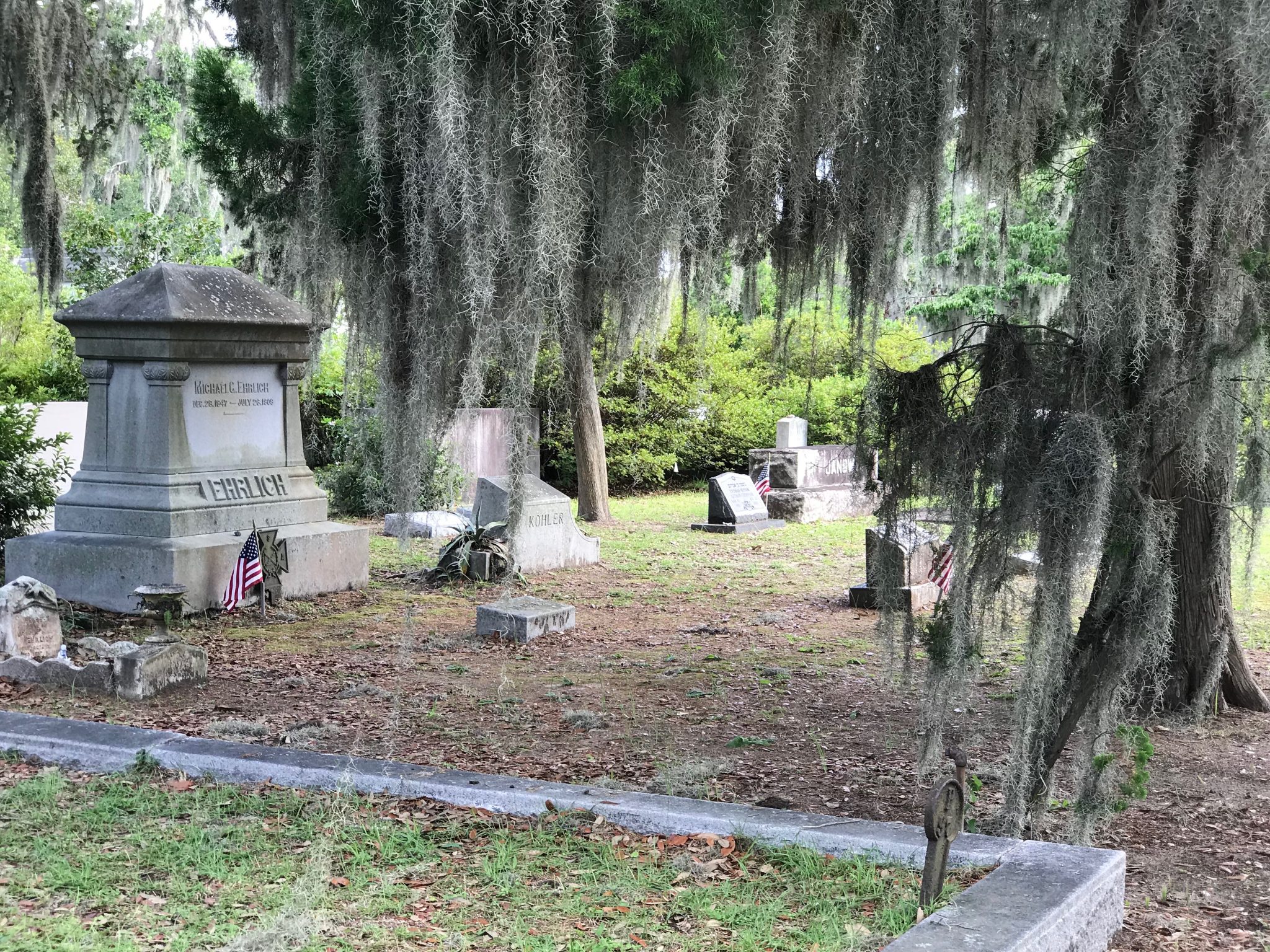 The cemetery started as the Evergreen Cemetery Company in 1868. It was purchased by the city of Savannah in 1907, when the name was changed to Bonaventure. The front entrance gate was built in 1864. 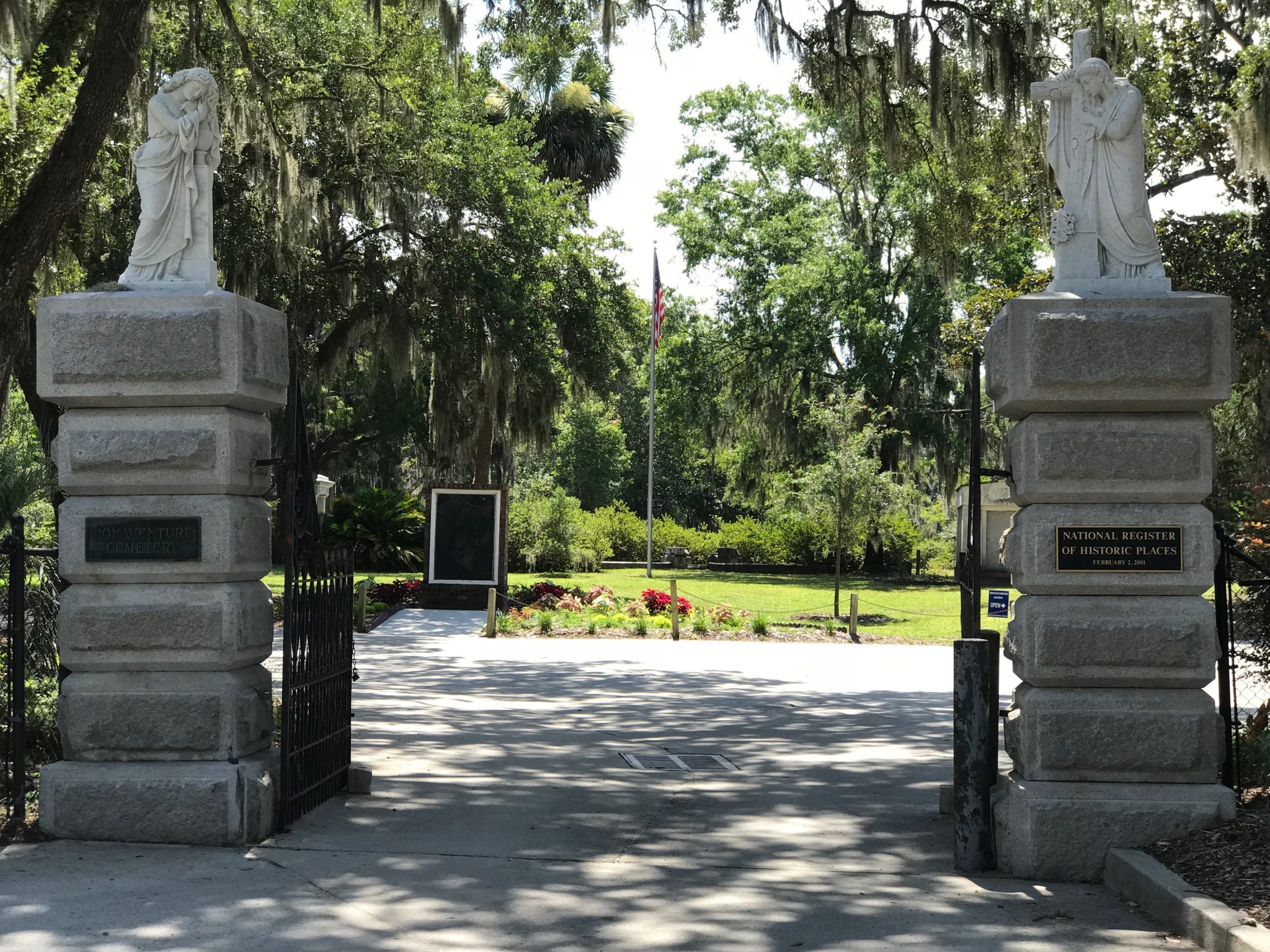 The cemetery is almost 160 acres, so there is a lot of ground to cover. There are roads criss-crossing the grounds, but we found a self-guided walking tour to be most enjoyable. The cemetery is divided into  19 sections labeled A – U (missing I and J).

There is certainly a lot to see. And unexpectedly there are some expected gravesites that are not at Bonaventure Cemetery. The book and subsequent movie Midnight in the Garden of Good and Evil made famous the “Bird Girl” statue, and the two main characters: Jim Williams and Danny Hansford (who Williams shot and killed). The statue has been moved to Jepsen Center for the Arts in Savannah to protect it. And Jim and Danny are not buried in this cemetery. Mr. Williams is buried in his hometown of Gordon, Georgia. And Danny Hansford is buried in Greenwich Cemetery, which is adjacent to Bonaventure (and is where the voodoo scene with the priestess Minerva takes place).

Below are some of our favorites that are indeed in Bonaventure Cemetery.

The most visited gravesite in the Bonaventure Cemetery belongs to Gracie Watson (Section E, Lot 99). 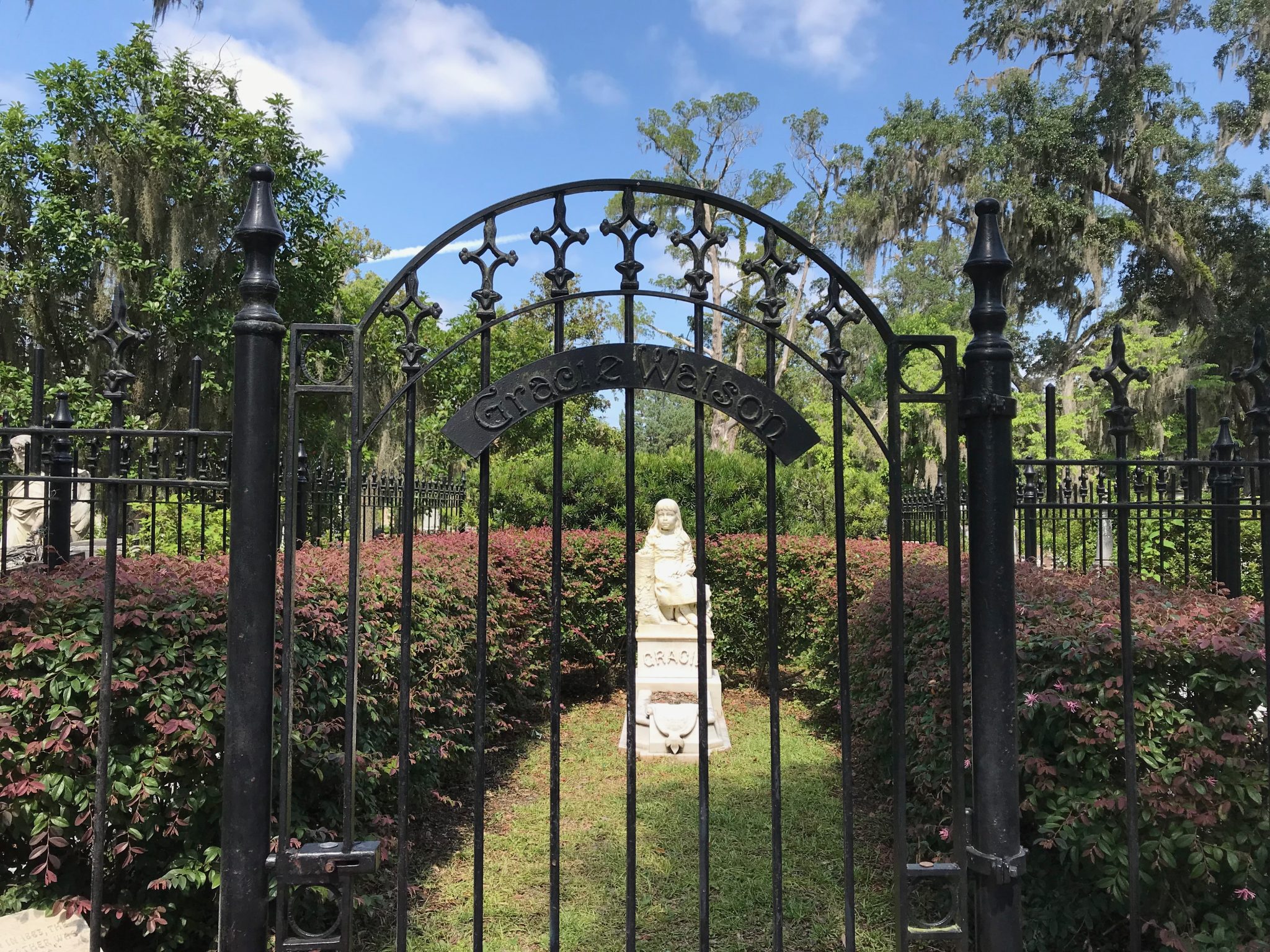 The carved stone sitting inside of the gates around Little Gracie’s statue give a good history of who she is:

Little Gracie Watson was born in 1883, the only child of her parents. Her father was manager of the Pulaski House, one of Savannah’s leading hotels, where the beautiful and charming little girl was a favorite with the guests. Two days before Easter, in April 1889, Gracie died of pneumonia at the age of six. In 1890, when the rising sculptor John Wall moved to Savannah. He carved from a photograph this life-sized, delicately detailed marble statue, which for almost a century has captured the interest of all passersby. 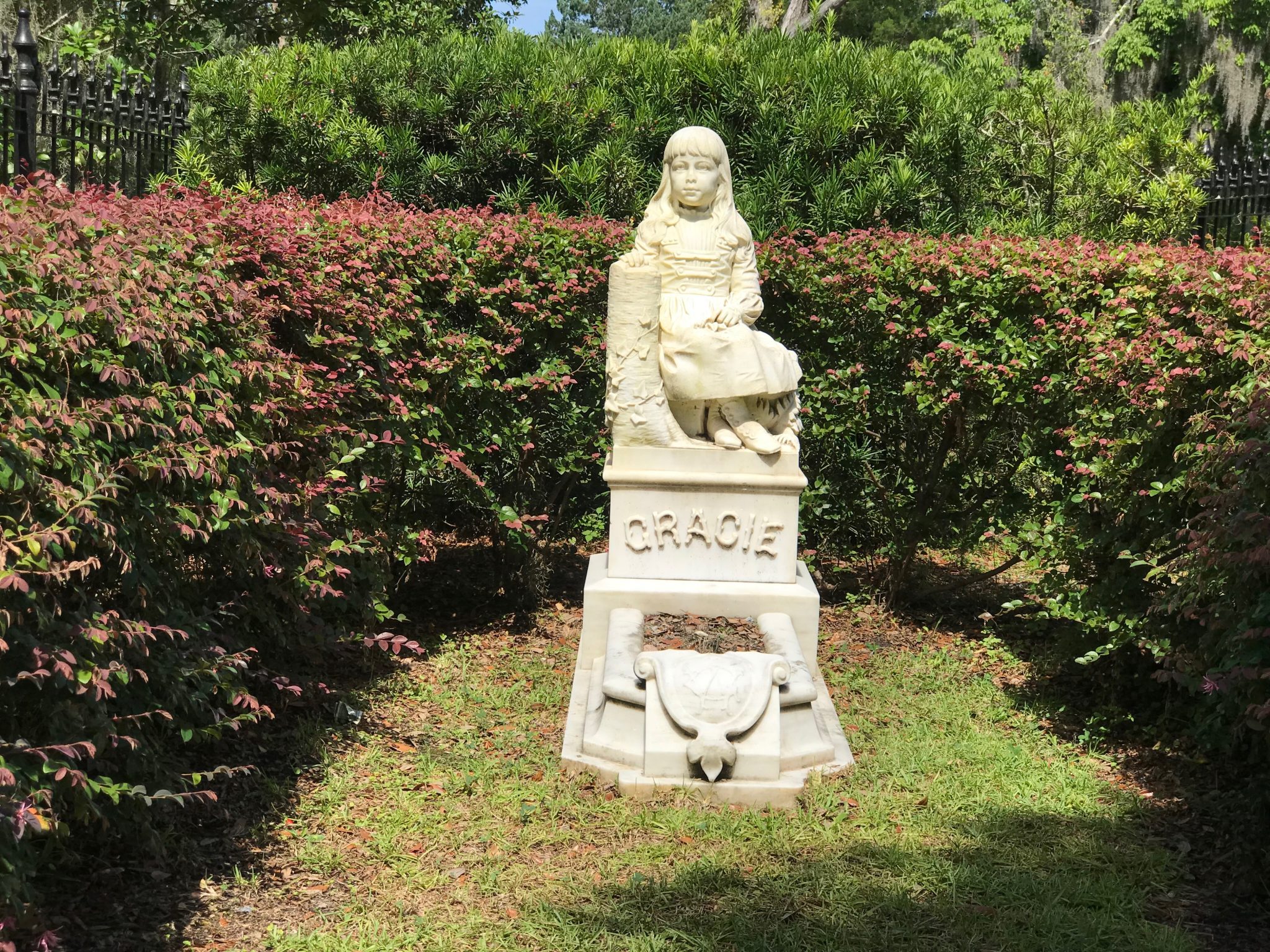 Johnny Mercer wrote a lot of familiar songs, won Academy Awards and co-founded Capital  Records. He was born in Savannah, and died in Hollywood. He won four Academy Awards as a lyricist for Best Original Song (and was nominated eighteen times). His family plot is in Section H, Lot 48. 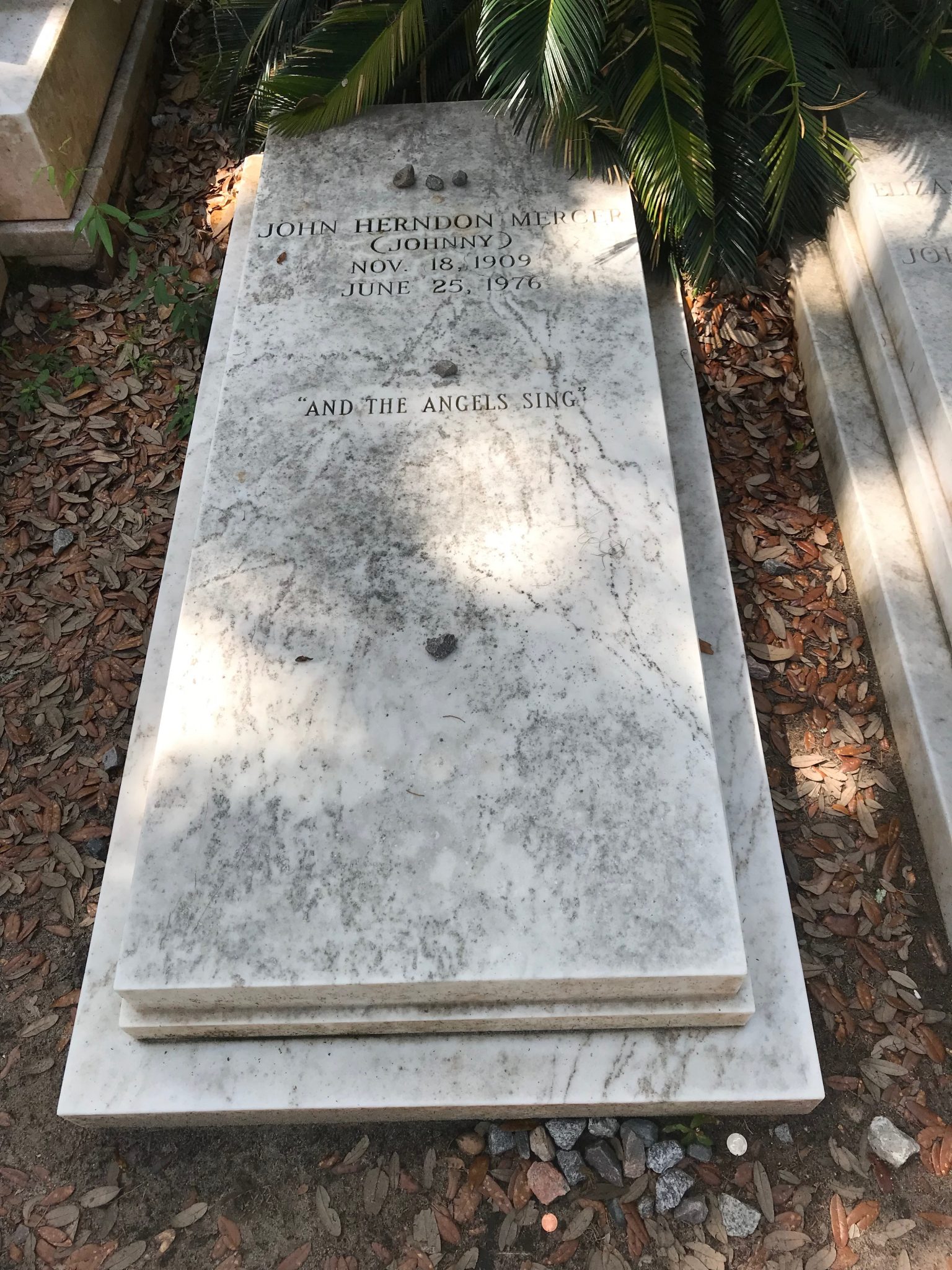 The most unique piece in the Mercer family plot is a bench at the front corner dedicated to the singer. 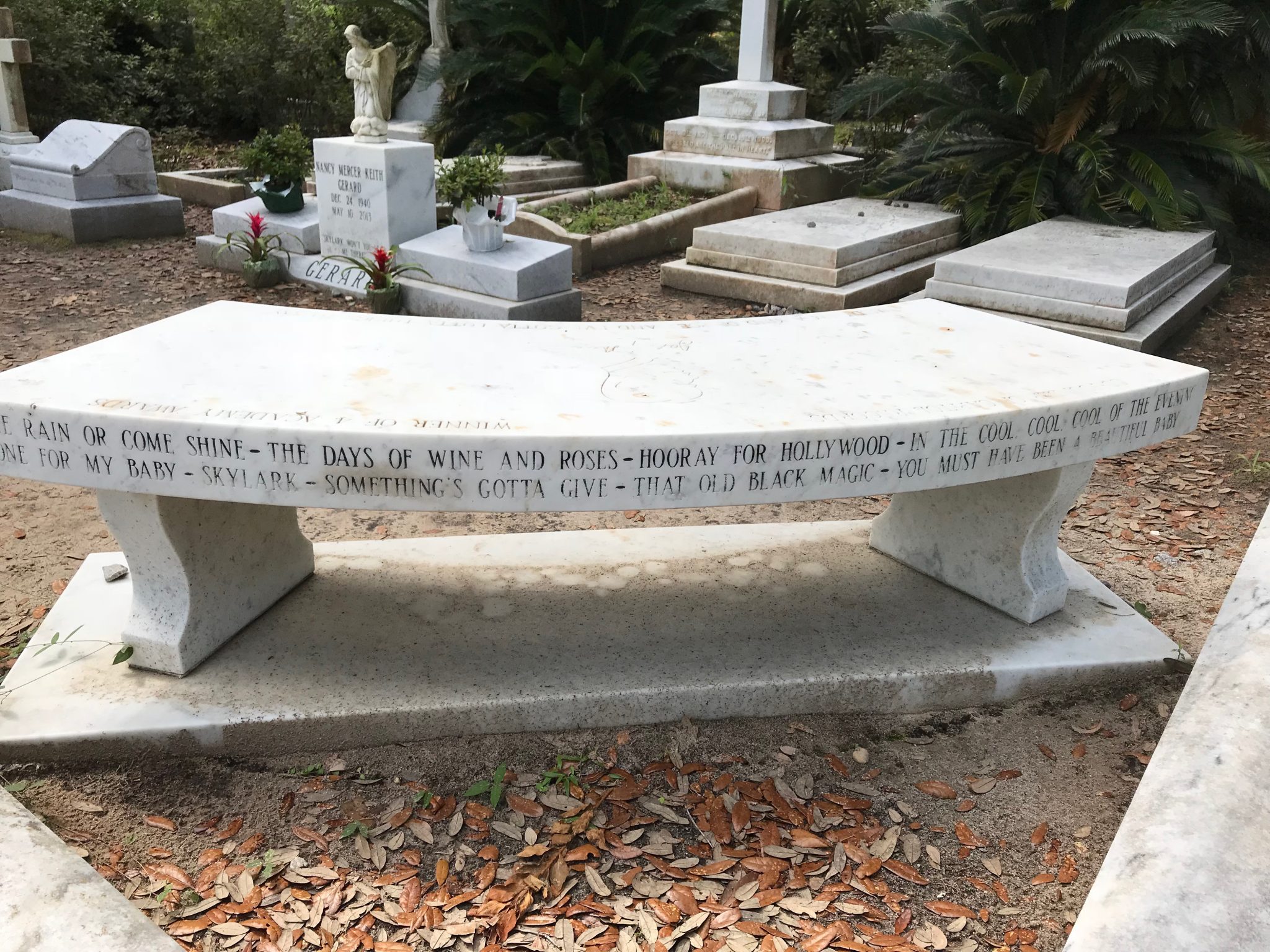 The inside rim and outside rim have a list of Mercer’s songs. 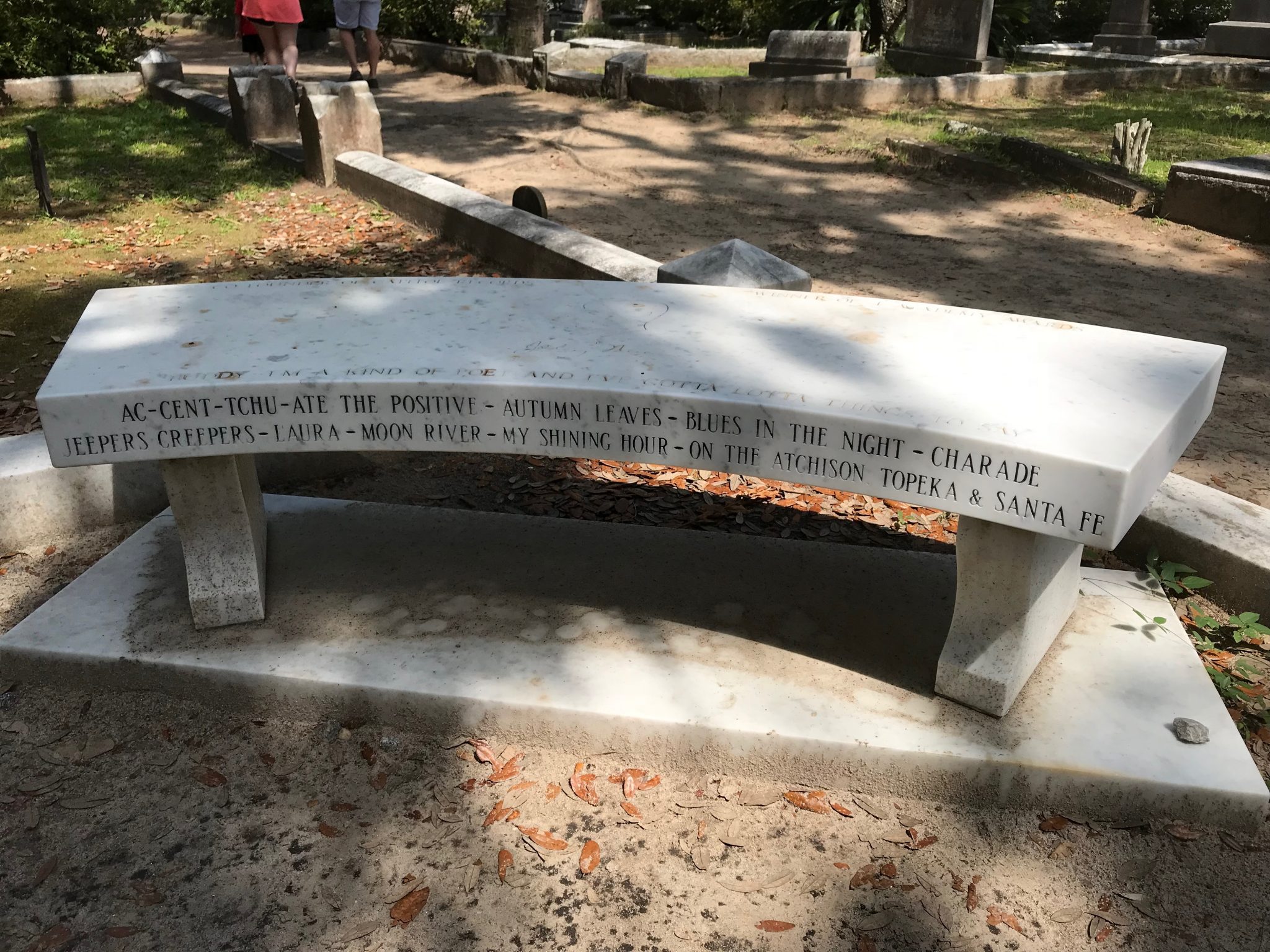 …and the top has quotes and accomplishments, including his Academy Award count. 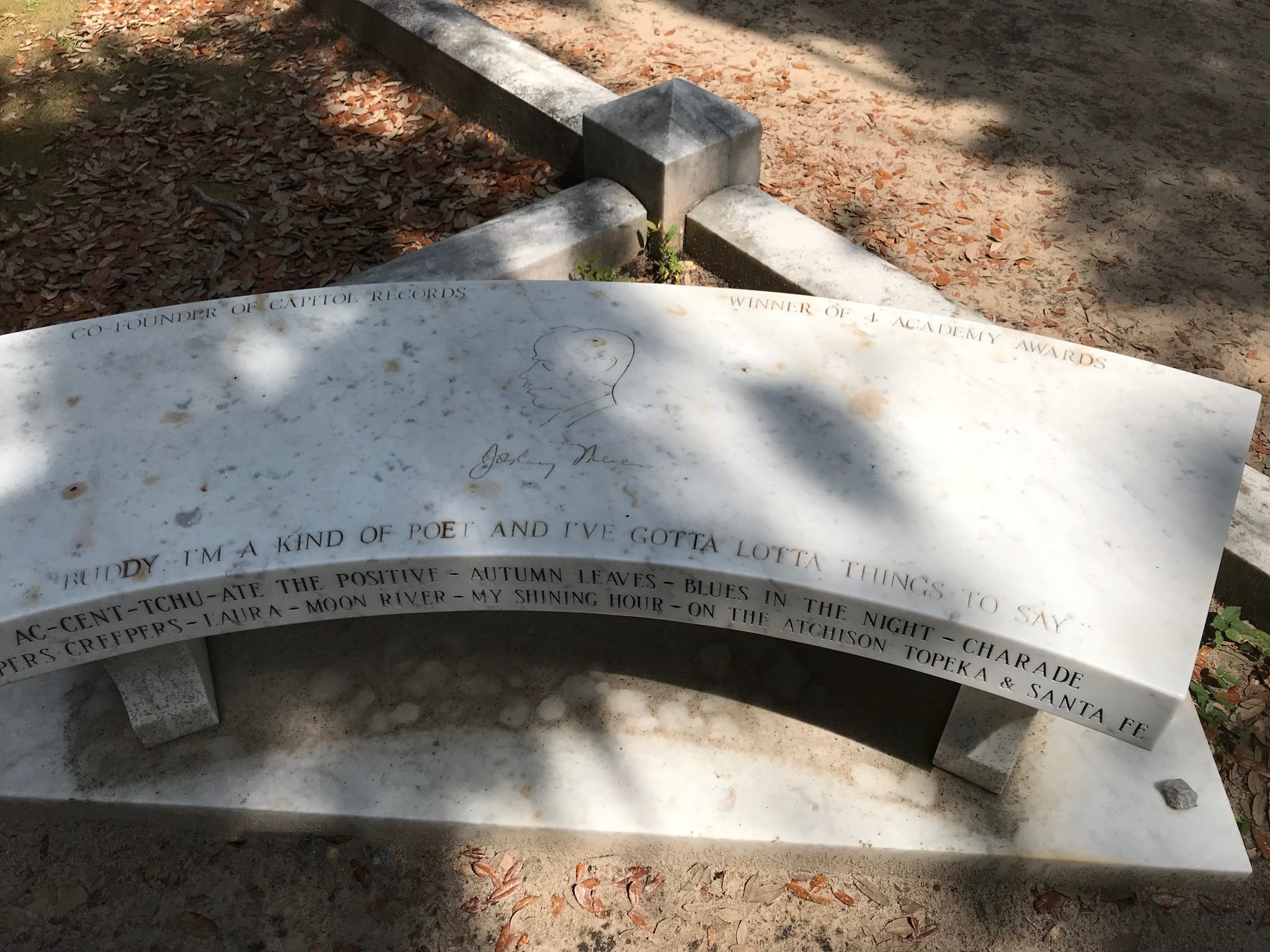 Section Q is the Jewish Section of the cemetery, started in 1909. There is a Jewish burial preparation chapel in the section that was built in 1918. Bonaventure Cemetery also built a second gate as a Jewish entrance to the cemetery. 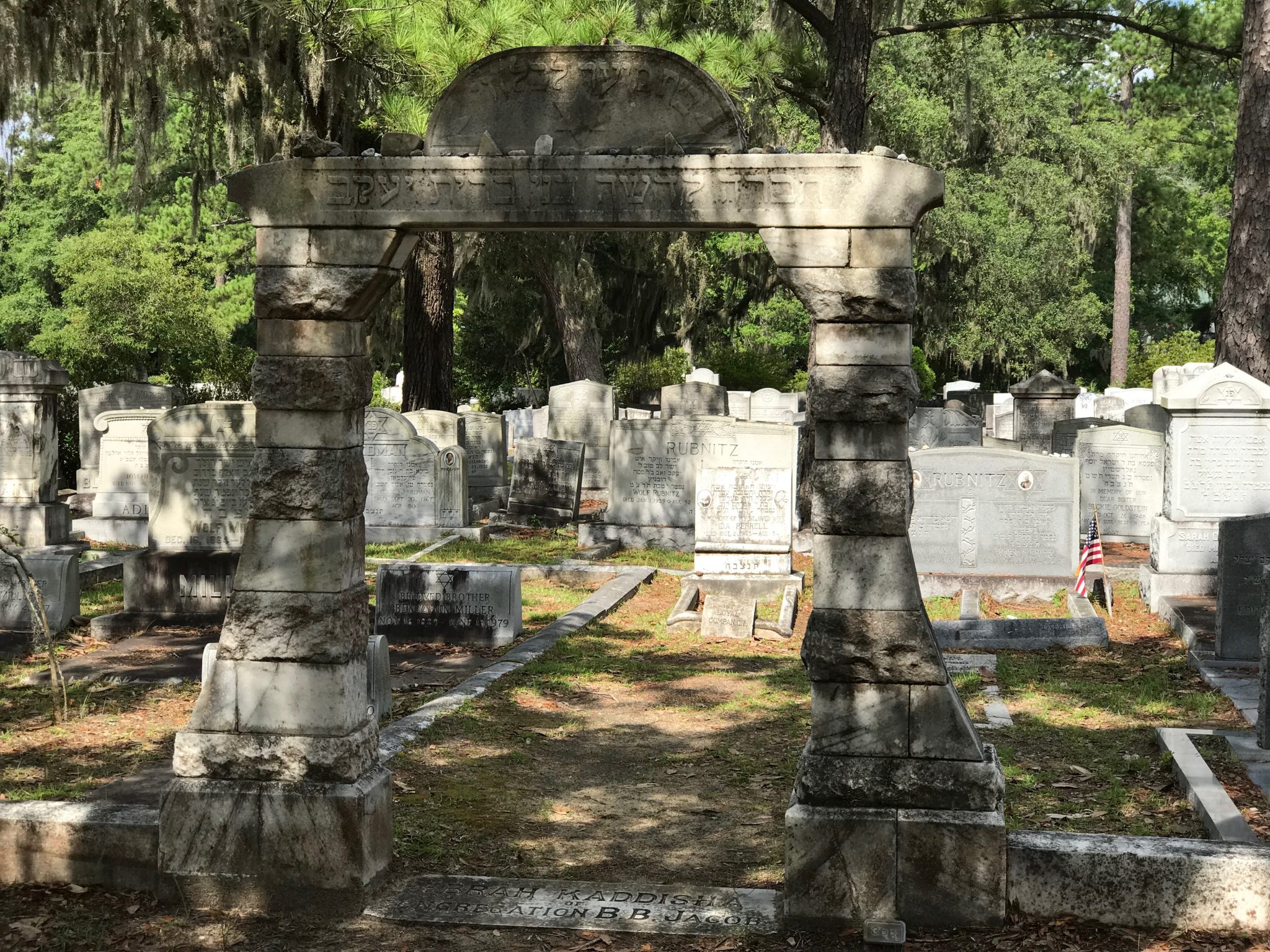 There is also a Holocaust Monument that was installed in 1950. 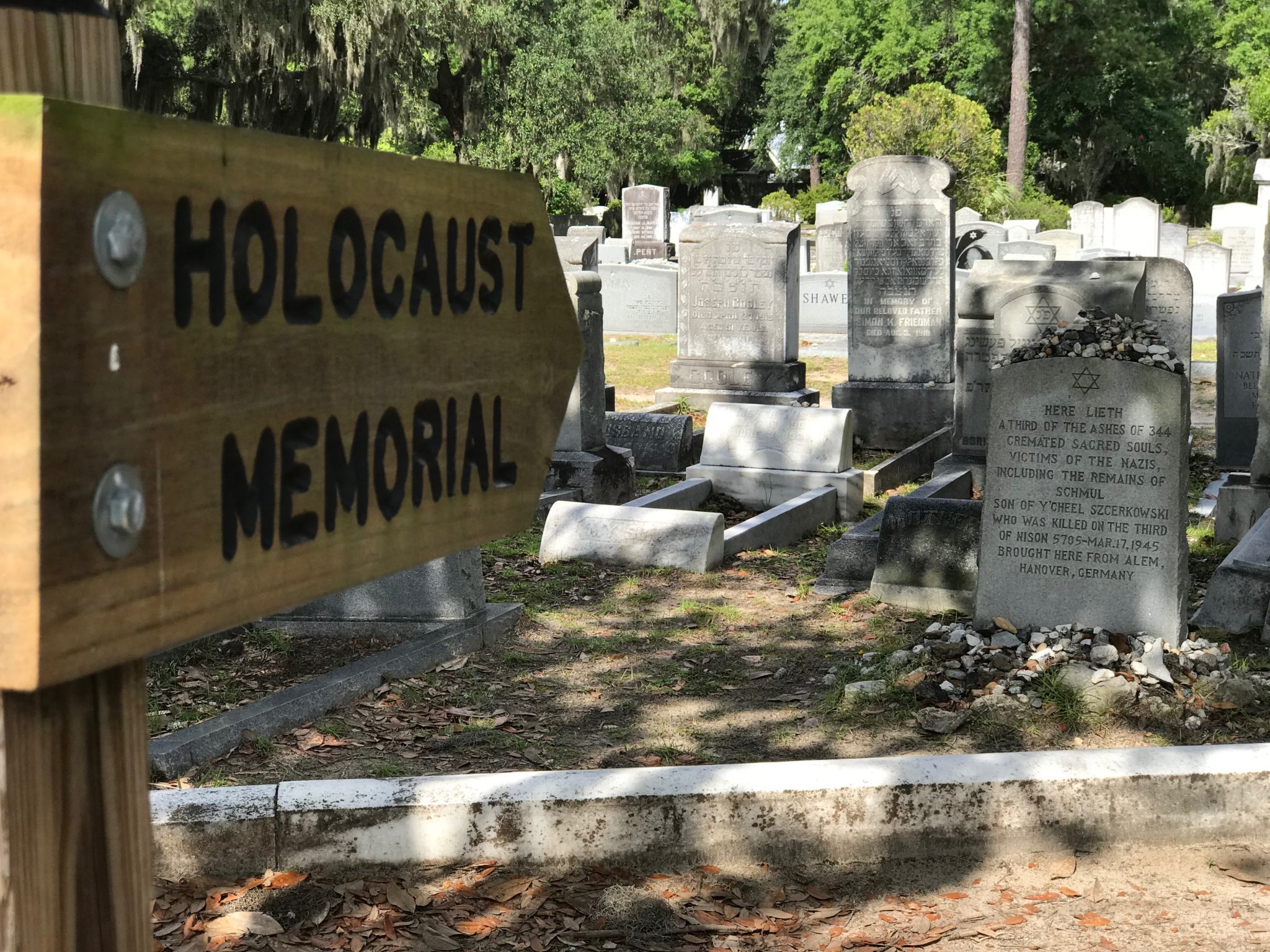 A closer shot for easier reading. 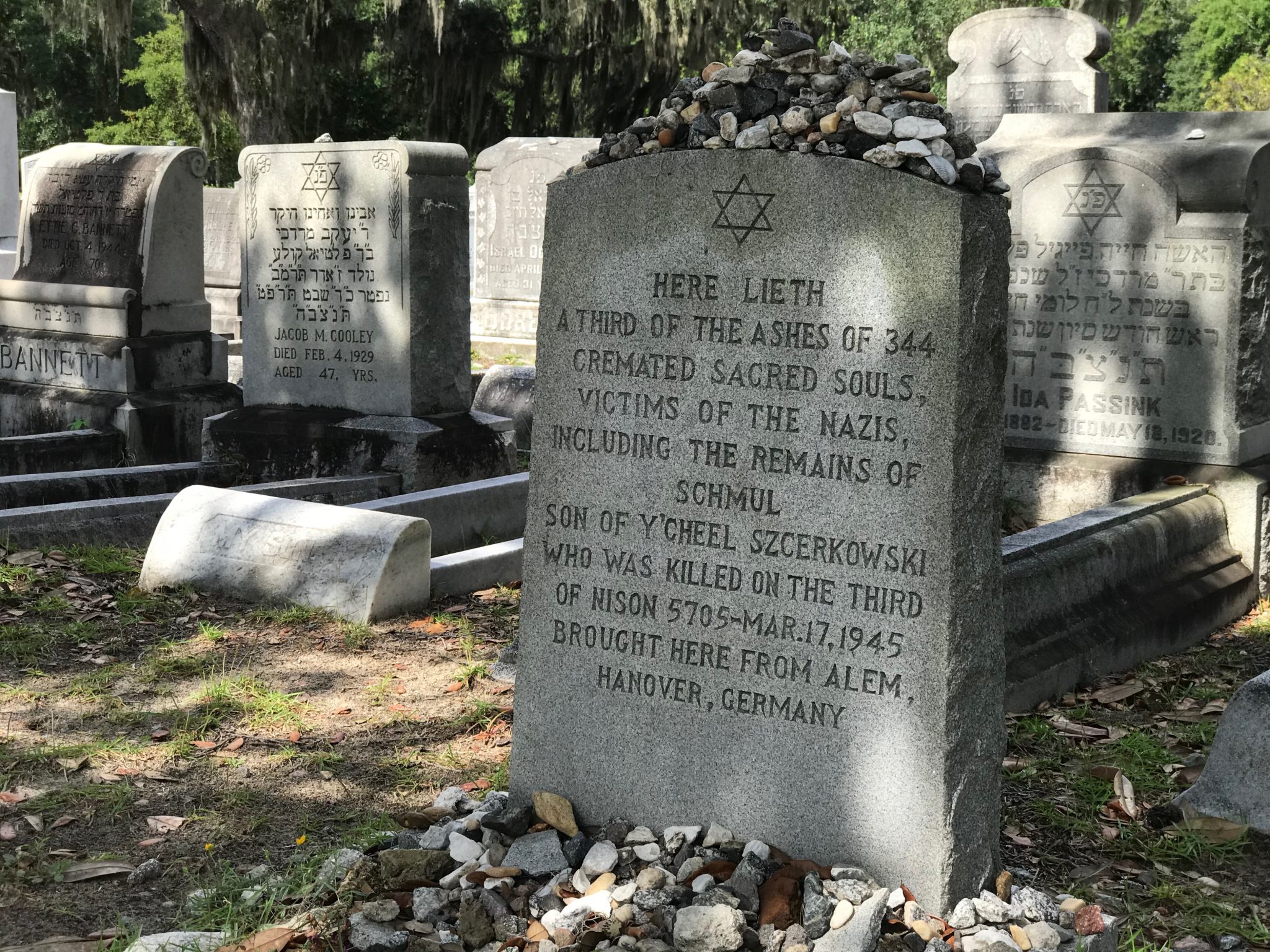 The Lawton family plot is in Section H, Lot 168, on a bluff overlooking the Wilmington River. The largest monument is for Alexander Lawton, who was a Brigadier General in the Confederate Army as well as a Member of the House of Representatives.

In the photo below, the sculpture of the seated lady is Corinne Elliot Lawton, daughter of Mr. Lawton. She died before him, in 1877 at age 30, probably of pneumonia. He died in 1896. 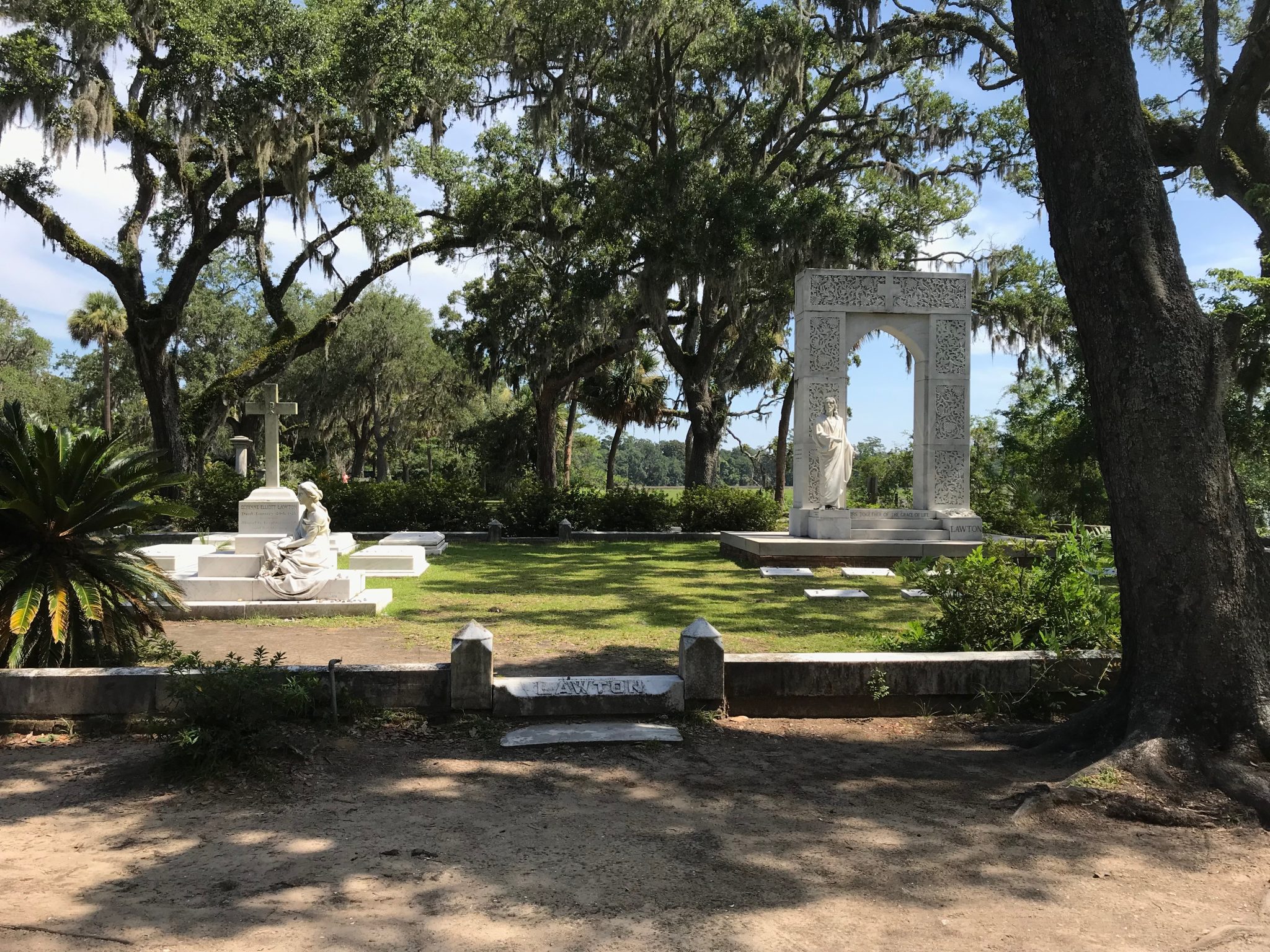 General Lawton’s memorial – according to the map the symbolism is “Heaven’s Gate overlooking the Eternal River with Christ beckoning people through.” 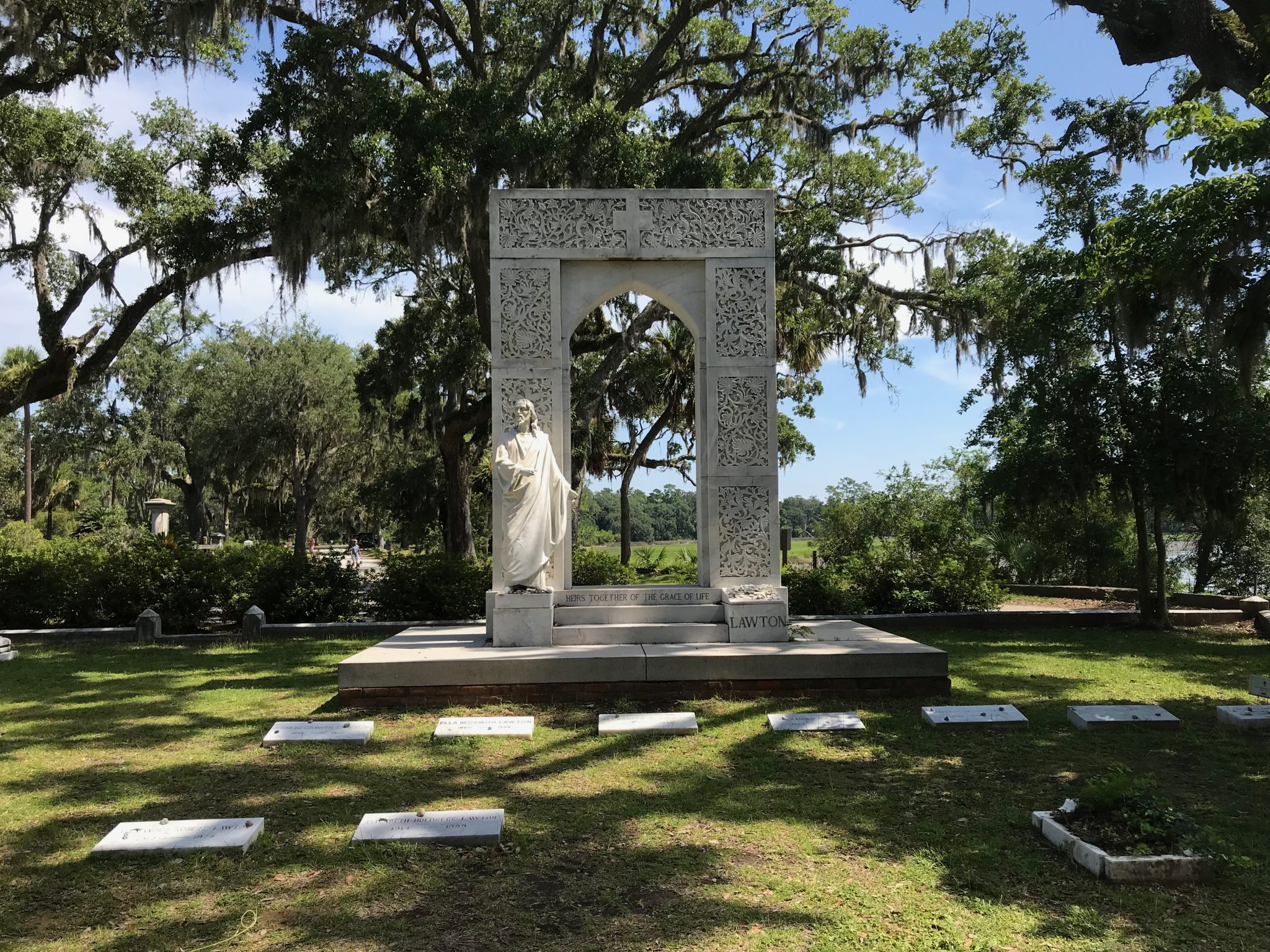 The Bonaventure Cemetery is bounded by the Wilmington River 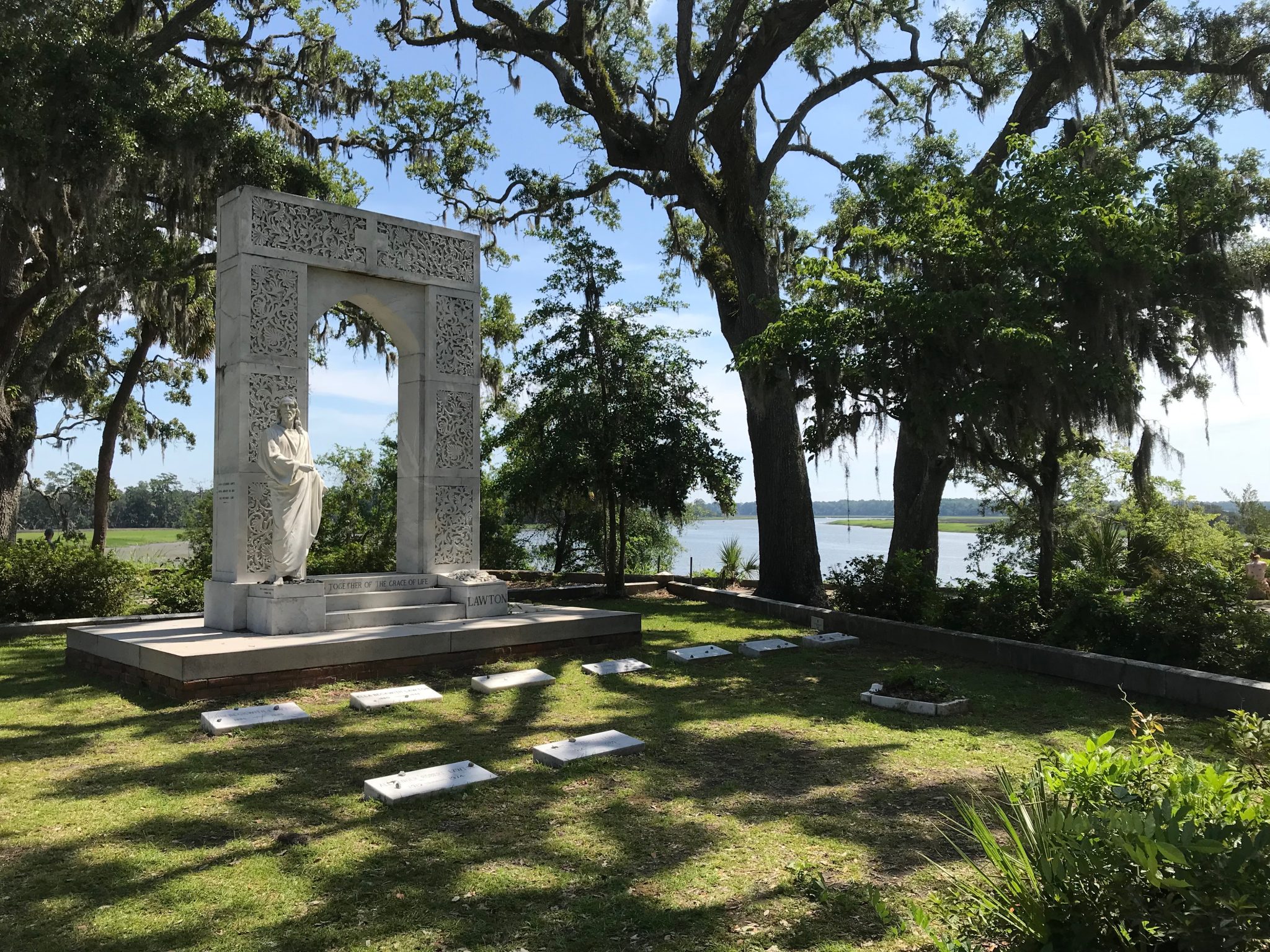 Many of the plots had the words “Perpetual Care” engraved into stones at the front of the plot, and they were obviously well maintained. We walked by a few that had signs that said “Do not maintain.” My wife, in speaking with the docent, discovered that even these are maintained twice a year. But some of the plots certainly look wild. 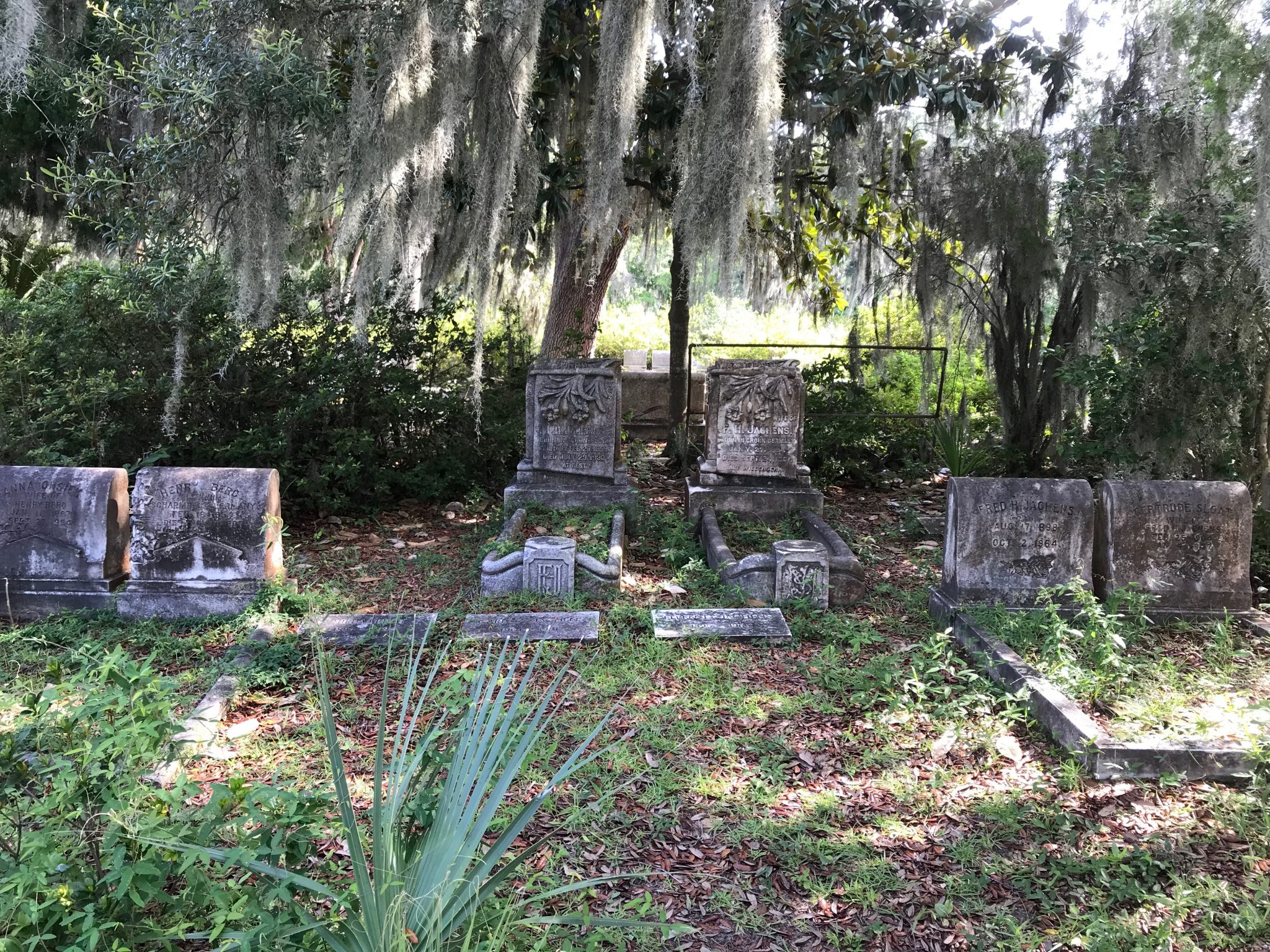 There are several tall monuments in the cemetery. 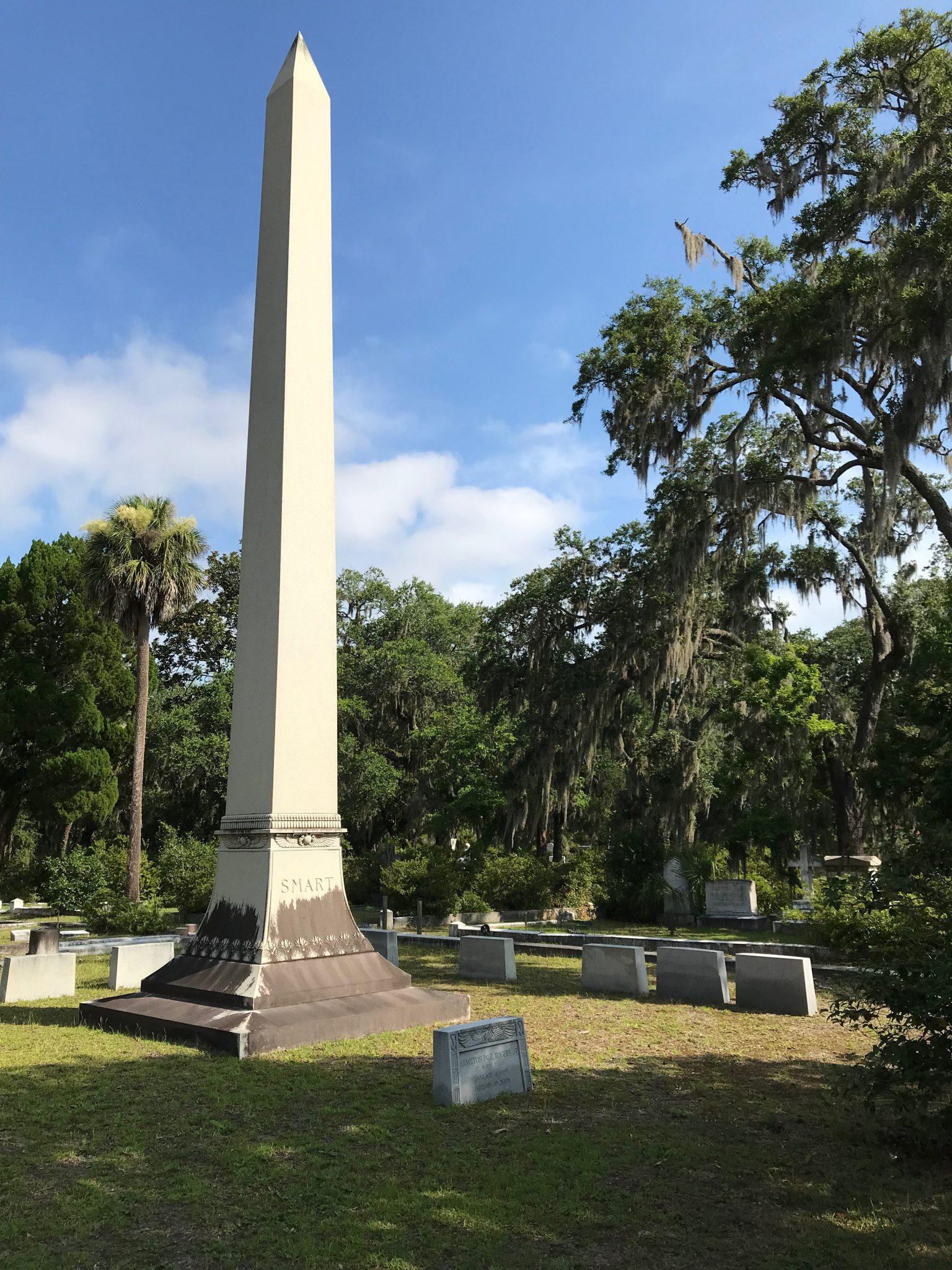 And there were many creative ones, like this lying-down cross. 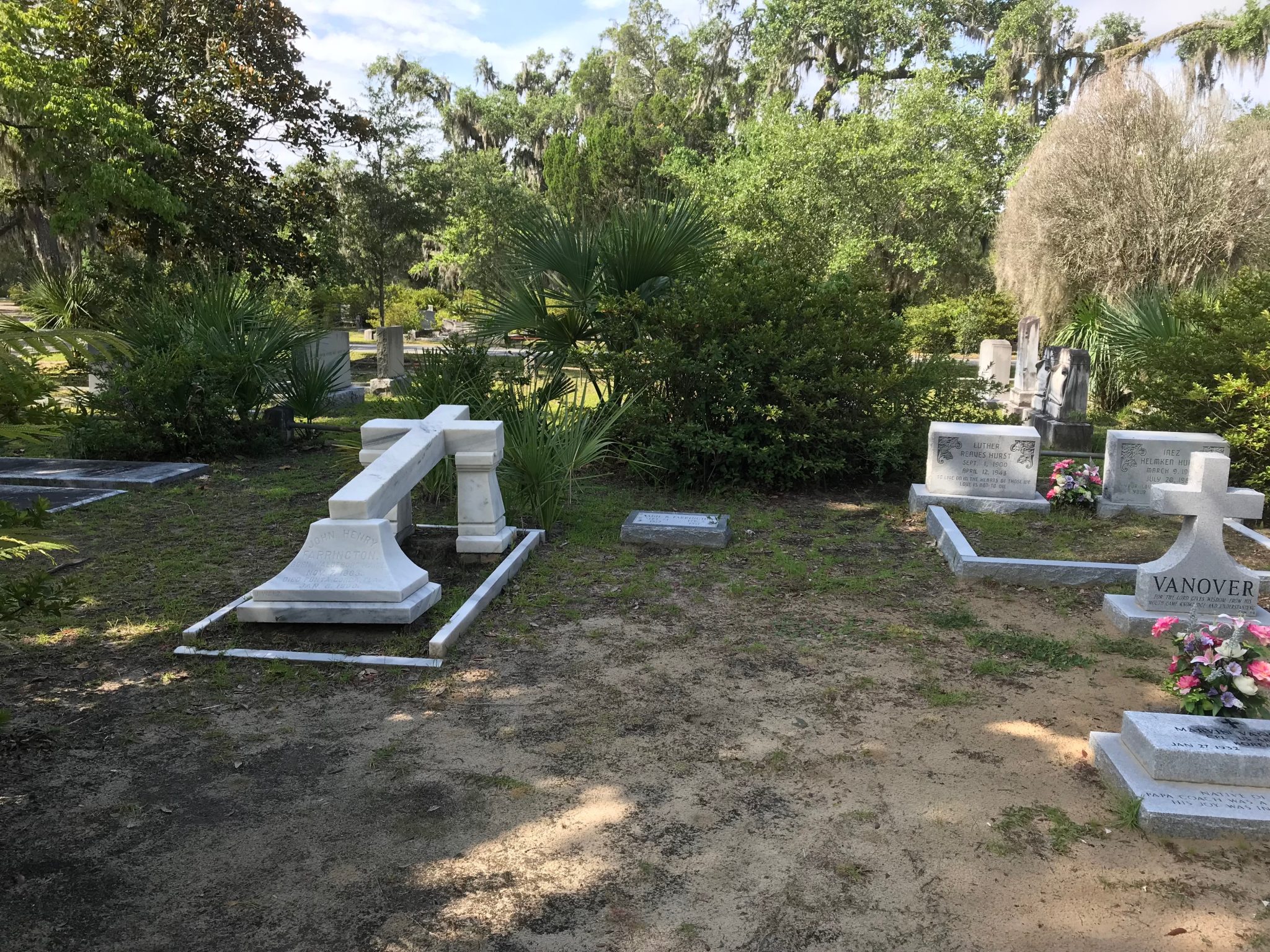 In addition to the many Confederate gravesite and monuments, there were many other military sites. The cavalryman one below has an excellent sword carved into the gravestone. 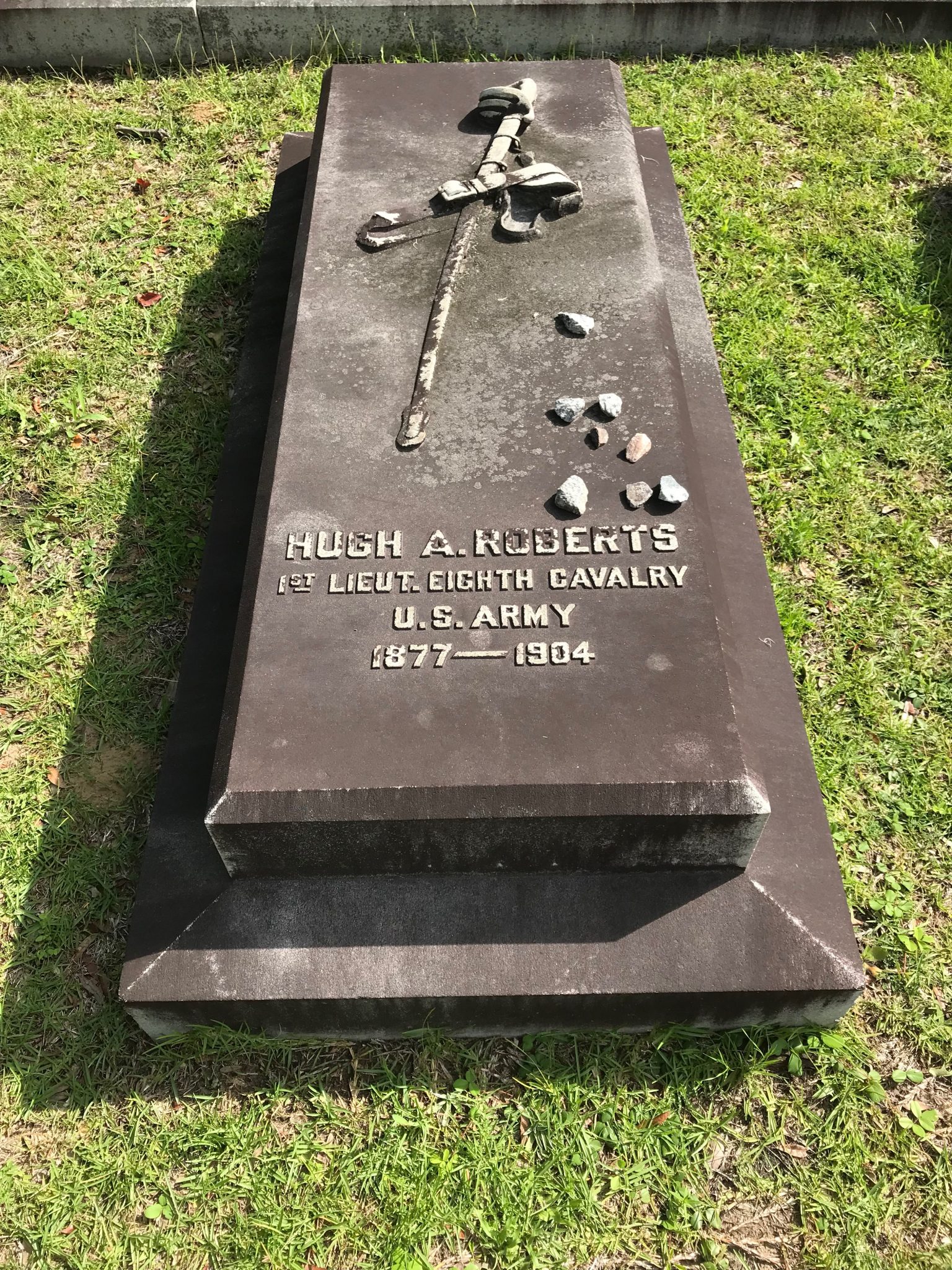 The American Legion Field sits at the far back of the cemetery, at the end of a road called “Legion Way.” The map says that area has been named “the Guardians of Bonaventure” as the plot points back to Savannah as if in protection. 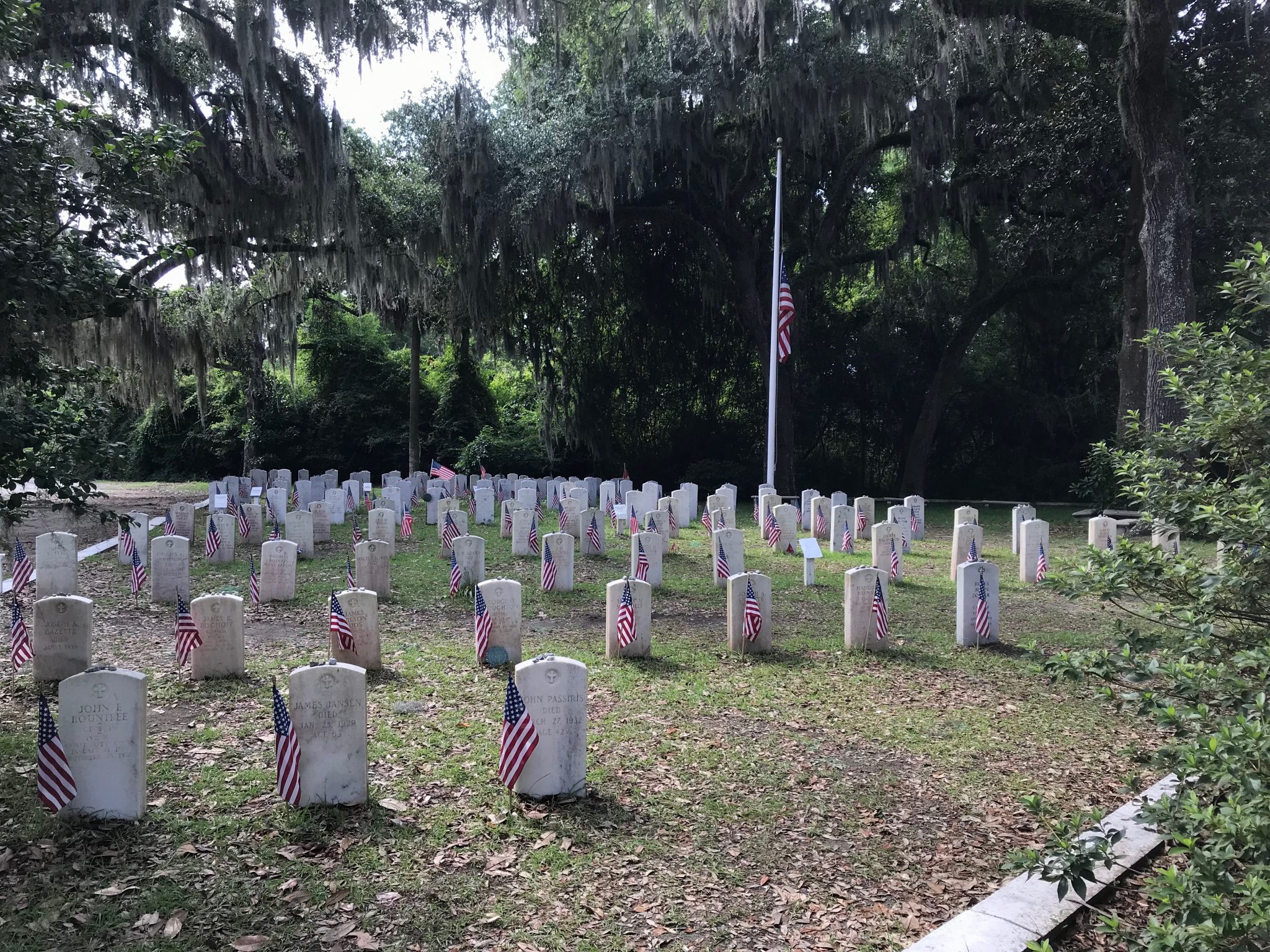