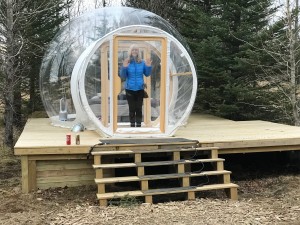 My lovely wife finds the most interesting places to stay. Some of them remain on the bucket list, and some of these adventures have already been experienced. We’ll add staying at The Buubble in the middle of the Golden Circle in Iceland to these accomplishments.

The Bubble (or buubble from their web site) is a transparent plastic/PVC heated sleeping chamber complete with deck and large bed. A tour is included with a stay at the Buubble. Ours was the Golden Circle tour (they are launching a tour of south coast in a few weeks) which included Thingvellir (Þingvellir), Geysir, Gullfoss, dinner and the Secret Lagoon (which is not-so-secret any longer, but still less crowded than the Blue Lagoon). We also made an extra stop at a smaller-that-Gullfoss falls called Faxi Falls. From there we headed to the location of the Buubbles.

There are nine buubbles in all, each separated by a few meters, some trees and in some places where there wasn’t enough privacy some hangings draped on lines between trees. Each was up on a wooden deck, which housed the heating and circulation equipment (and, we were told, some sensors to make sure everything was in working order). There is a small service house which had a table, kitchen and two bathrooms with showers. 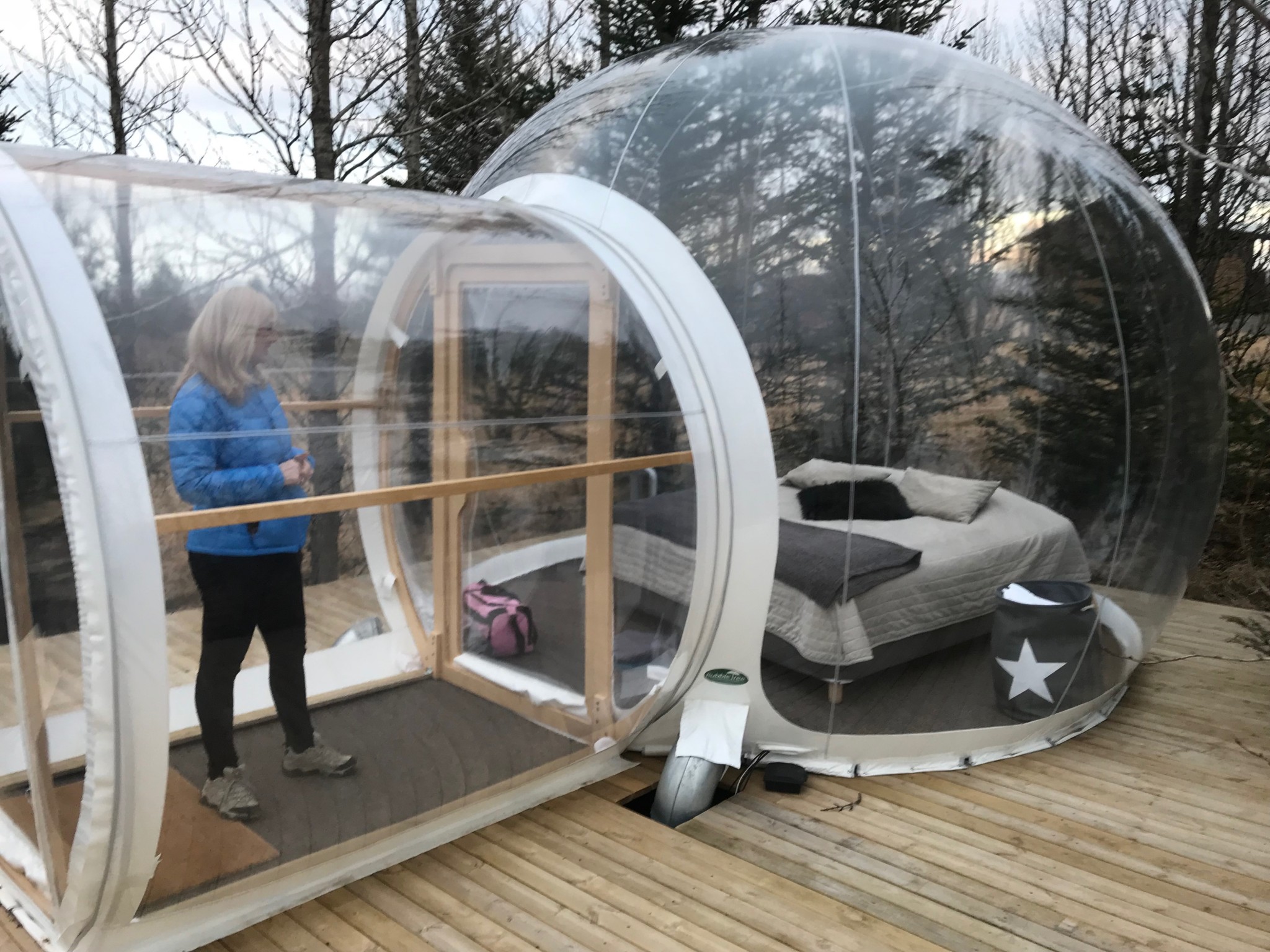 There is a large bed, a heater, a lamp and a basket with towels and extra blankets. There’s not room for much else in the Buubble, which is why they suggest that you pack very lightly. We’d left most of our baggage at our last hotel. 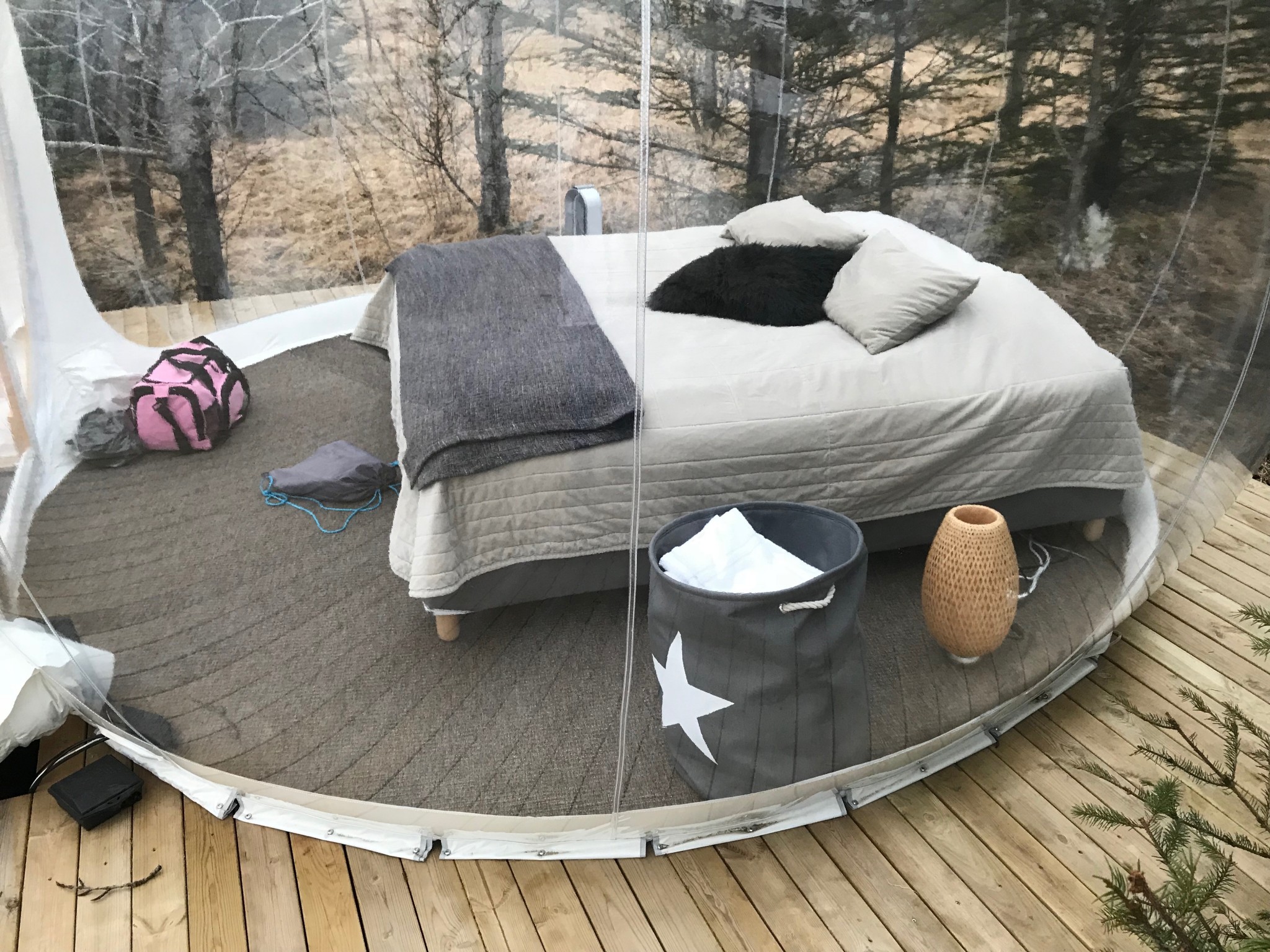 We were pretty lucky with the Icelandic weather. It was in the 40’s F (this was in mid April). The air circulation made it where we did not need to have the portable heater on at all. Olaf told us there were folks staying there all winter and all said they were comfortable in the Buubbles.

This is the view out of the Buubble. Even though we had a great day of weather, the clouds rolled in. The Buubble is obviously built to see the Northern Lights far away from city light interference…but unfortunately one cannot see through the clouds. We set our alarms for midnight, 2am and 4am but no joy. 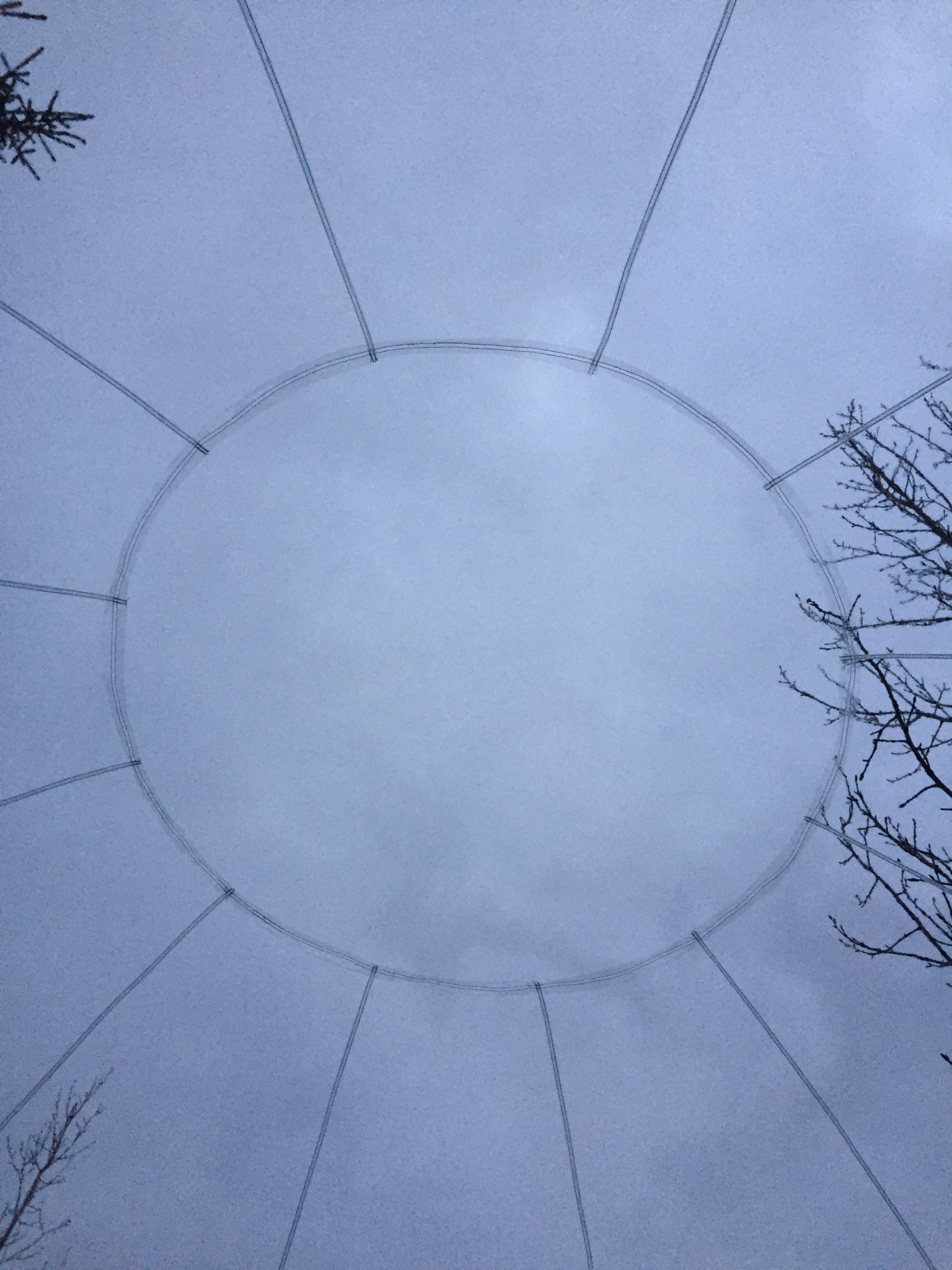 The Bubble has an airlock of sorts separated by two doors to keep the bubble from collapsing and to keep the heat in. Our guide Olaf gave us the warning “if both of the doors are open at the same time the bubble will turn into a body bag – don’t do this.” Sound Advice? 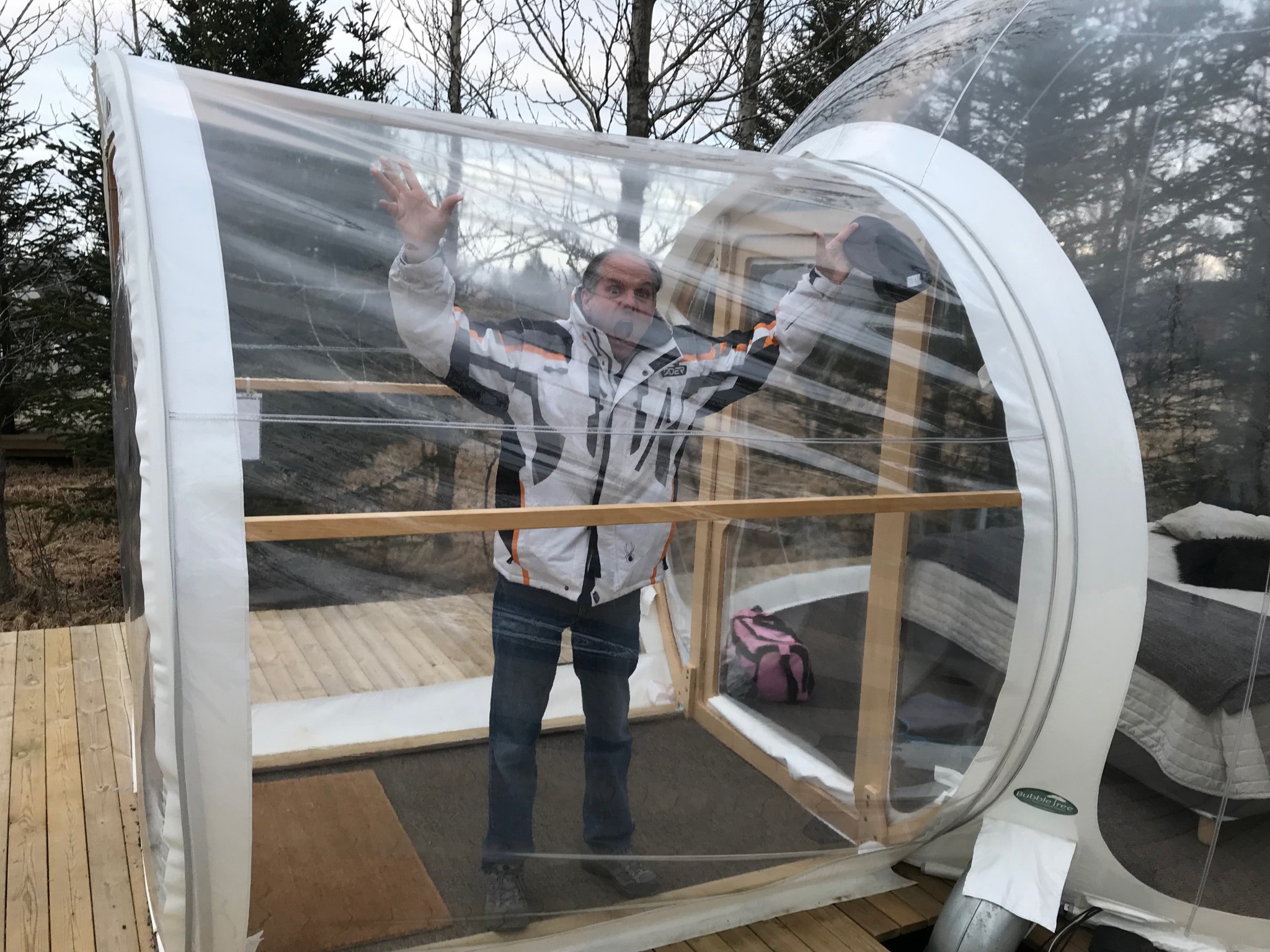 We sipped beer and bourbon on the deck until it got too cold, then relaxed looking up at the sky. 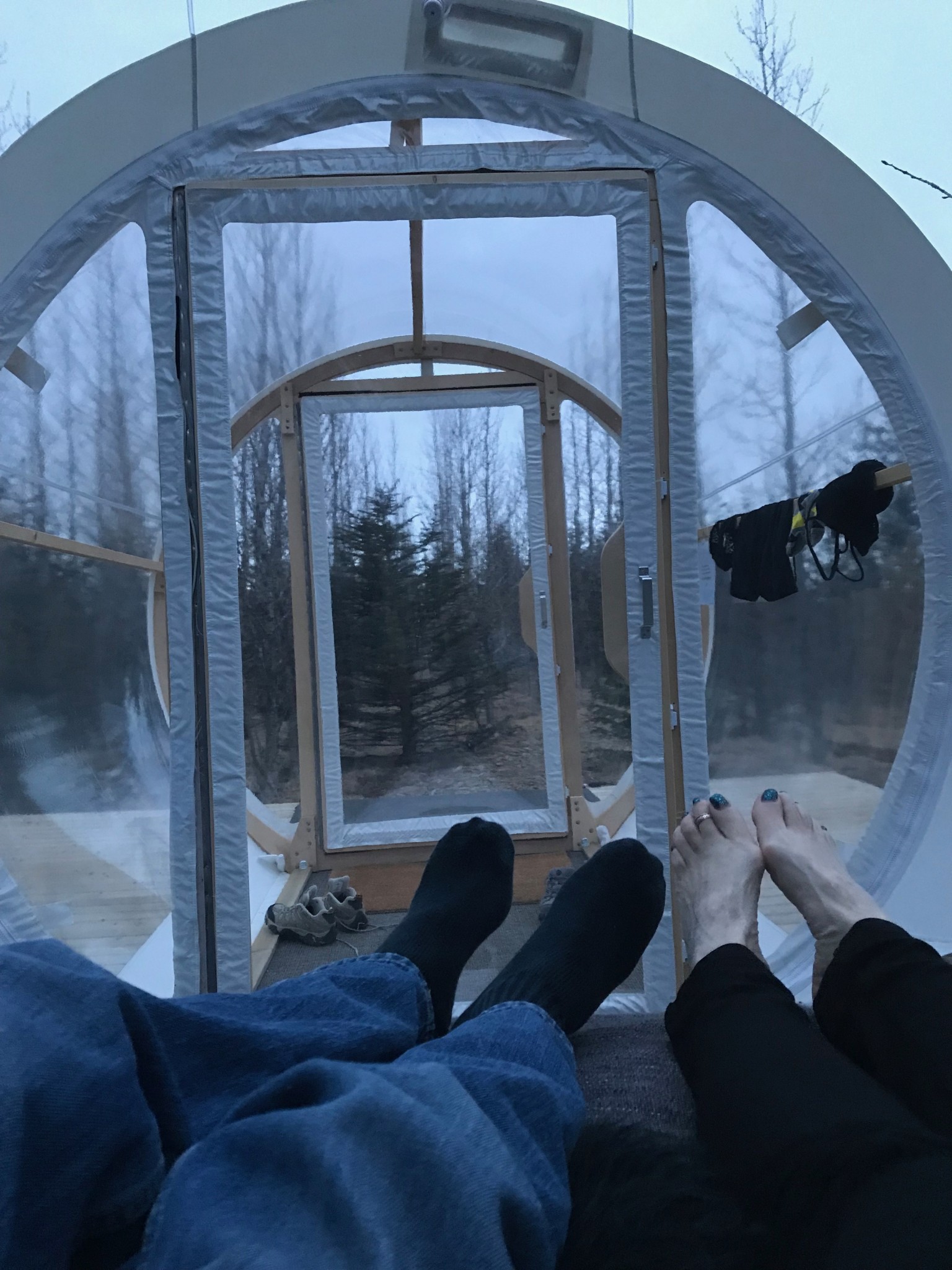 After a night in the Buubble, our next stop was Snæfellsness Peninsula.