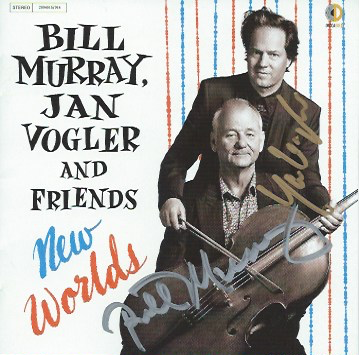 Below is a close facsimile of our reaction to the Bill Murray, Jan Vogler and Friends show at the Long Center in Austin Sunday March 18, 2018.

“I have this great idea for a show.”
“Let’s hear it!”
“We get Bill Murray…”
“I’d go!”
“Wait! I haven’t even finished.”
“Lot’s of people would go just to see Bill. He could just sit there and be funny.”
“Yeah, he could do that. But in addition to that, we get him to sing, dance, read…”
“Read? That sounds boring.”
“You just said he could sit there and you’d watch. What’s the difference between sitting quietly and sitting there reading?”
“Hmmmm…..I guess it depends on what he read.” “How about the classics? Mark Twain?”

When you trying something different, that’s about the reaction you’d expect. Murray walks out accompanied by two young ladies, Mira Wang with her violin and Vanessa Perez who sits at the piano. Jan Vogler comes out with his cello and starts playing Saint-Saëns “The Swan”…to which Bill starts reading a poem about the “Blessing of the Boats.” A bit late, I recognize Murray reading James Fenimore Cooper while be accompanied by more music, as my wife give me the “WTF is going on here?” look.

It was an interesting mix, and it got even more so.

Bill starts singing (“It Ain’t Necessarily So”), dancing with Ms. Wang (who is Vogler’s wife) and occasionally goes and sits behind the piano while the three musicians play.

It was strangely cool. When he actually did start reading Mark Twain, singing “I Dream of Jeanie With the Light Brown Hair” and dancing by himself, the party got started.

At the end there were several encores – one of which Bill had a bouquet of roses that he walked out into the crowd throwing, even making some into the upper levels – and Bill said their hotel reservations were “wonky” so they had nowhere to go. In the end, they sang and played Marty Robbins’ “El Paso”, with Murray in full voice on the howling parts.

It was a unique show, whose developed is explain further in the liner notes (did you noticed the SIGNED LINER NOTE photo?!?!). An excerpt from the below.

James Fenimore Cooper and Franz Schubert, two of the most renowned masters of nature description, had found each other. Jascha Heiftz’s adaptation of “It Ain’t Necessarily So” was mixed with the original song, and became a new piece with Bill, Mira and Vanessa. “Moo River” by Henry Mancini gave the perfect frame to the scene on the river from Huckleberry Finn. … James Thurber’s “If Grant Had Been Drinking at Appomattox” seemed hilarious, but at the same time sparked a touch of existentialism when accompanied by Ravel’s “Blues” from the 1920s.

The CD (acquired signed at the show) called “New Worlds” has the entire set.