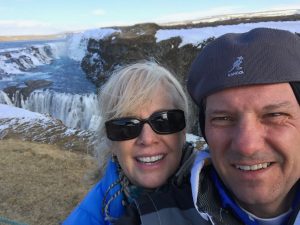 Our tour of the Golden Circle in Iceland was included in our stay at the Buubble. Our tour guide Olaf picked us up from our hotel (the very cool Canopy in Reykjavik) in a Suburban. Olaf (full name Olafur Ragnarsson) drove us through the three normal Golden Circle stops of Thingvellir, Gullfoss and Geysir, and took us to the no-so-Secret Lagoon, an extra waterfall name Faxi Falls, and dinner. He then drove us to the Buubble, and picked us up the next morning and took as back to Reykjavik (with a stop for coffee and pastries, plus a cool mined volcano).

Olaf said he was working for the Buubble group part-time. He was an enjoyable guide – knowledgeable about the area, the history and the country – and he played music from Icelandic artists as he drove. He used to own a music studio where he recorded some of his own music (some of it can be found here) and hosted others to record (Kaleo for instance).

There are lots of pictures, and as usual you can click on a photo to see a bigger version.

Þingvellir is a national park with places of interest concerning geology and Icelandic history:

The letter Þ (thorn or Þorn) is pronounced in English as “th”. This letter used to be in Old English, Old Norse and some other languages, but survives today only in Icelandic. 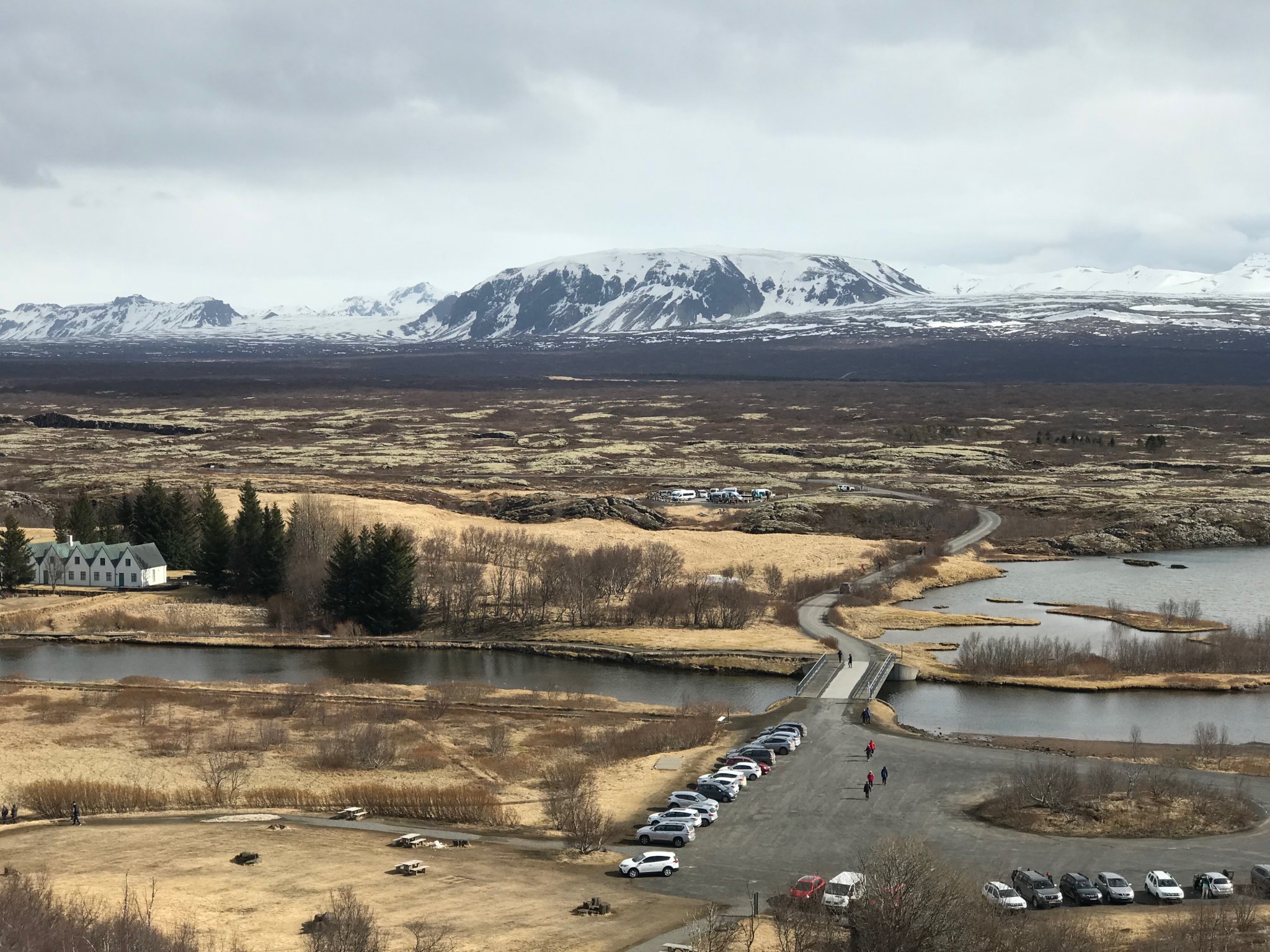 One of the many topics Olaf discussed with us was the incredibly well documented Icelandic genealogy and therefore history. There is an app and a website where any Icelandic person can enter their name and see their relation to the founders of Iceland – Olaf showed us his direct line. There is also a dating app to make sure you are not sleeping with an aunt or close cousin (handy!).

The Law Rock (Lögberg) was where the laws were read from during the meetings of the early Parliament. According to the signage at the park:

Here at the Law Rock in the latter part of June each year, the allsherjargodi (the leading chieftain and priest of the Old Norse religion) declared the session of parliament open and declared sanctuary within the parliament site. The session lasted two weeks. During the time of the Old Commonwealth, the lögsöguaõur (Law Speaker) recited aloud the laws in force, standing at the Law Rock. This was before the Icelanders had a written language so the rules of society were passed on orally. The Law Speaker recited one-third of the body of laws each year, but recited the rules of procedure of the Althing items every session. 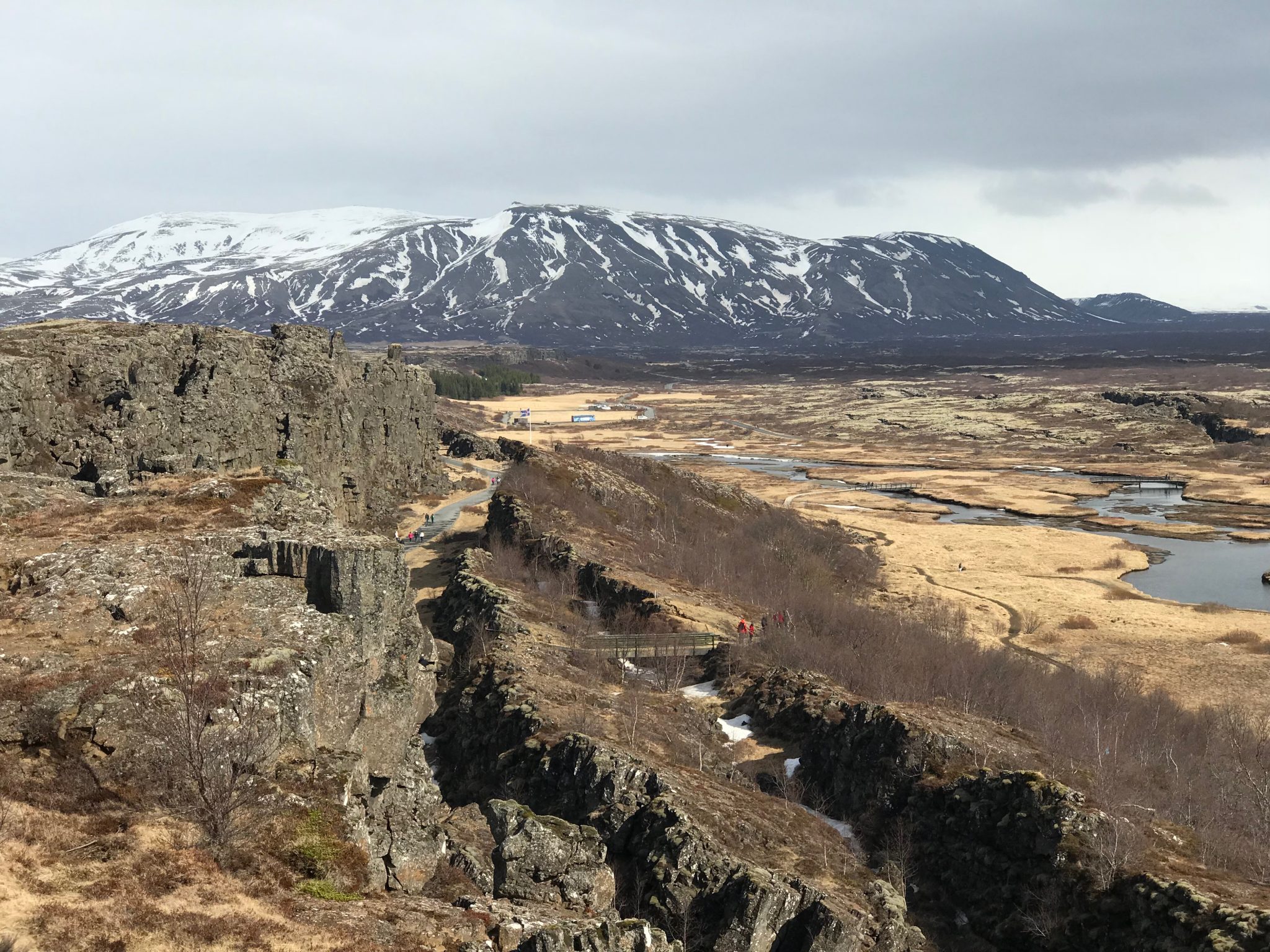 Though I couldn’t find it documented anywhere, Olaf told us this island in the middle (where there are two bridges in the photo below) is called murder island. This is because when they had disputes that couldn’t be settled the two parties me in the middle to fight out their grievances. 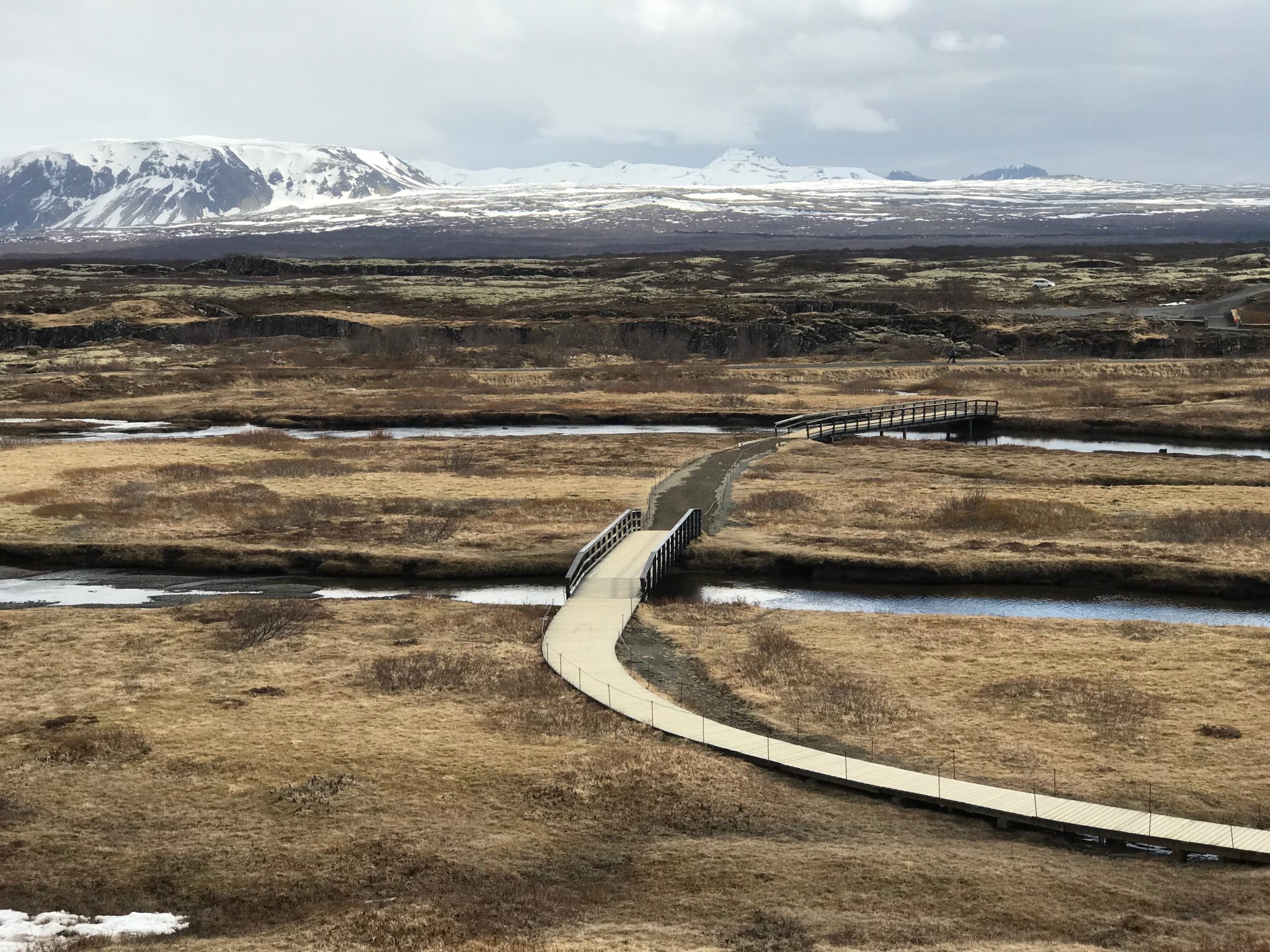 Many of the scenes in the series “Game of Thrones” were filmed in Iceland, and some in this park.

We had a good bit of time to wander around, then met Olaf at the parking lot on the other side (seen at the end of this walkway) before continuing on. 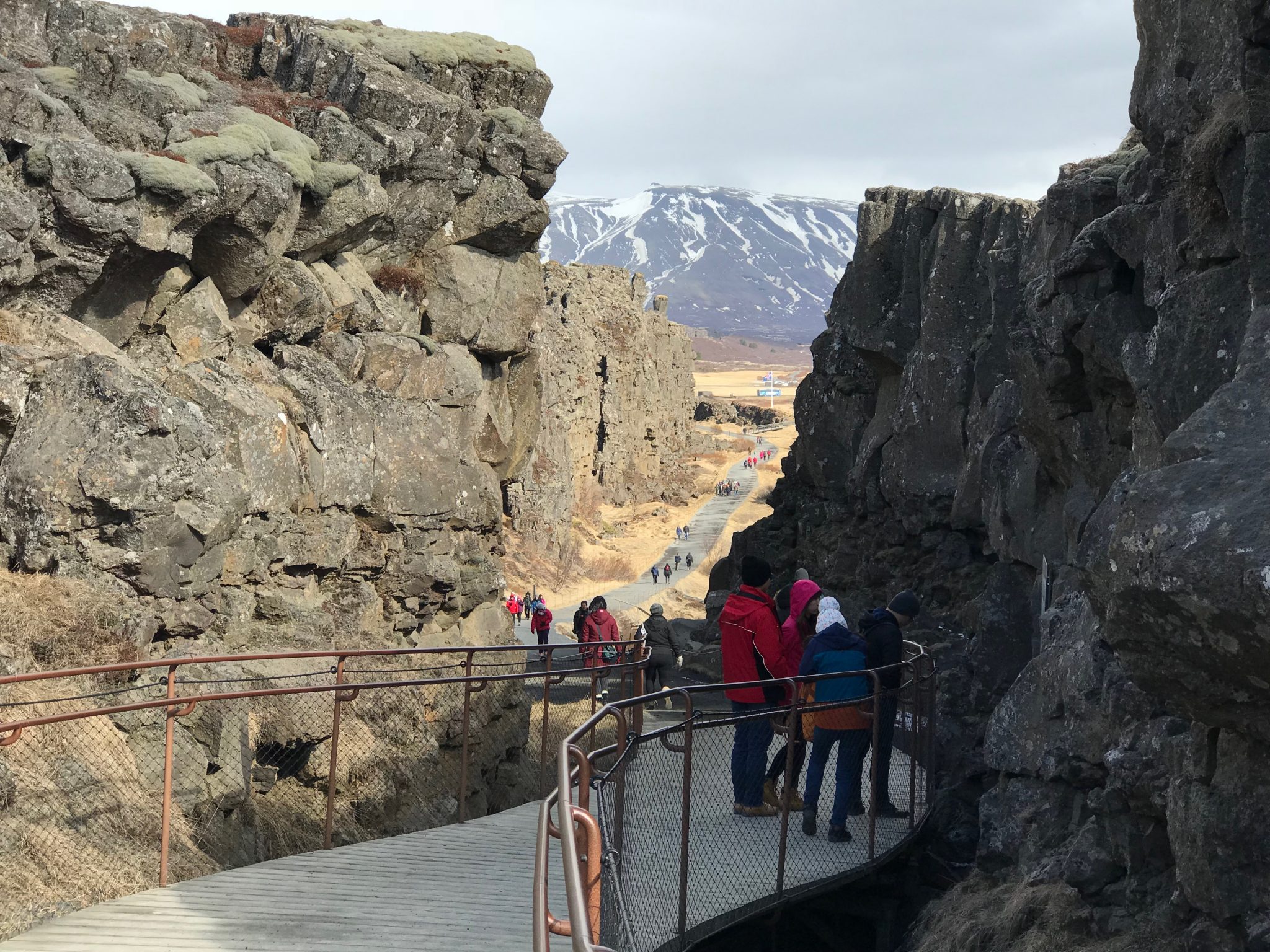 We were told by our trusty guide that this is pronounced “Gay-zer”, not “Guy-zer” or “Geezer”. The English word “geyser” comes from the old Norse word “geysir” which mean “to gush.” Olaf also told us they called the mist “smoke” instead of “steam”. As Icelanders have an in-depth written history, it is no surprise that the Great Geysir here is the first one ever described in print, first mention in writing in the year 1294. 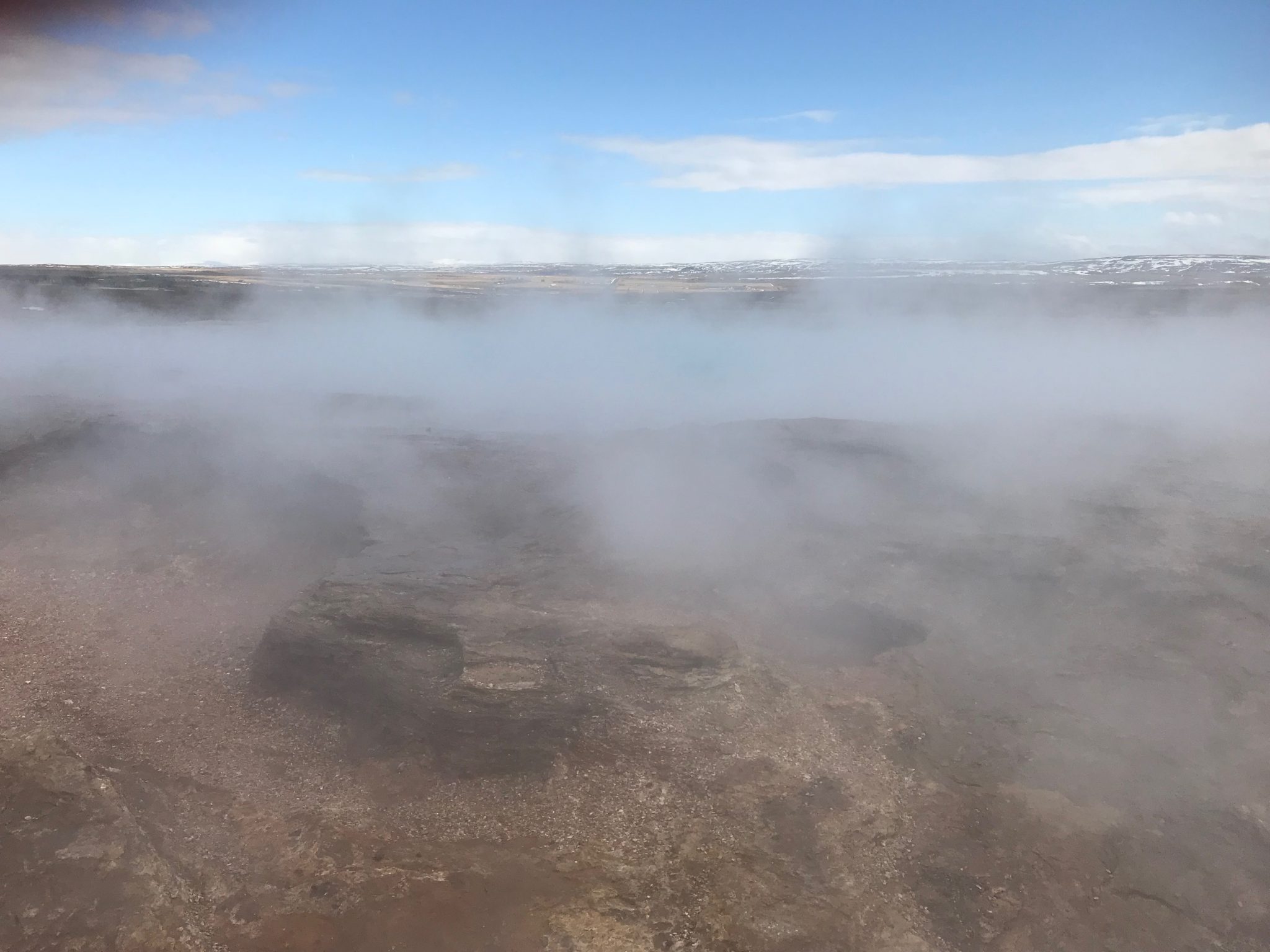 There are several geysirs at this park. The “Great Geysir” (shown through the smoke in the picture above) rarely erupts, but when it does so it can throw boiling hot water several hundred meters up. The nearby Strokkur Geysir erupts every few minutes, and it is the one featured in the video and photo sequence below.

There’s a good cafe at Geysir where we had a bite, then back on the road to our next destination.

It was really REALLY windy when we got to the famous waterfall. Olaf told us that the record was five minutes – for a group to get out, run through the waterfalls views and meet him on the other side – because that was all the cold they could stand.

We did indeed do a bit better.

Gullfoss isn’t the biggest waterfall in Iceland – that would be Dettifoss in northern Iceland, which is 330 feet wide with a 144 foot drop, with an average volume of 193 cubic meters of water a second. Gullfoss (Golden Falls) has two drops (36 feet and 69 feet), and the second one makes it look like the water just goes into the earth. 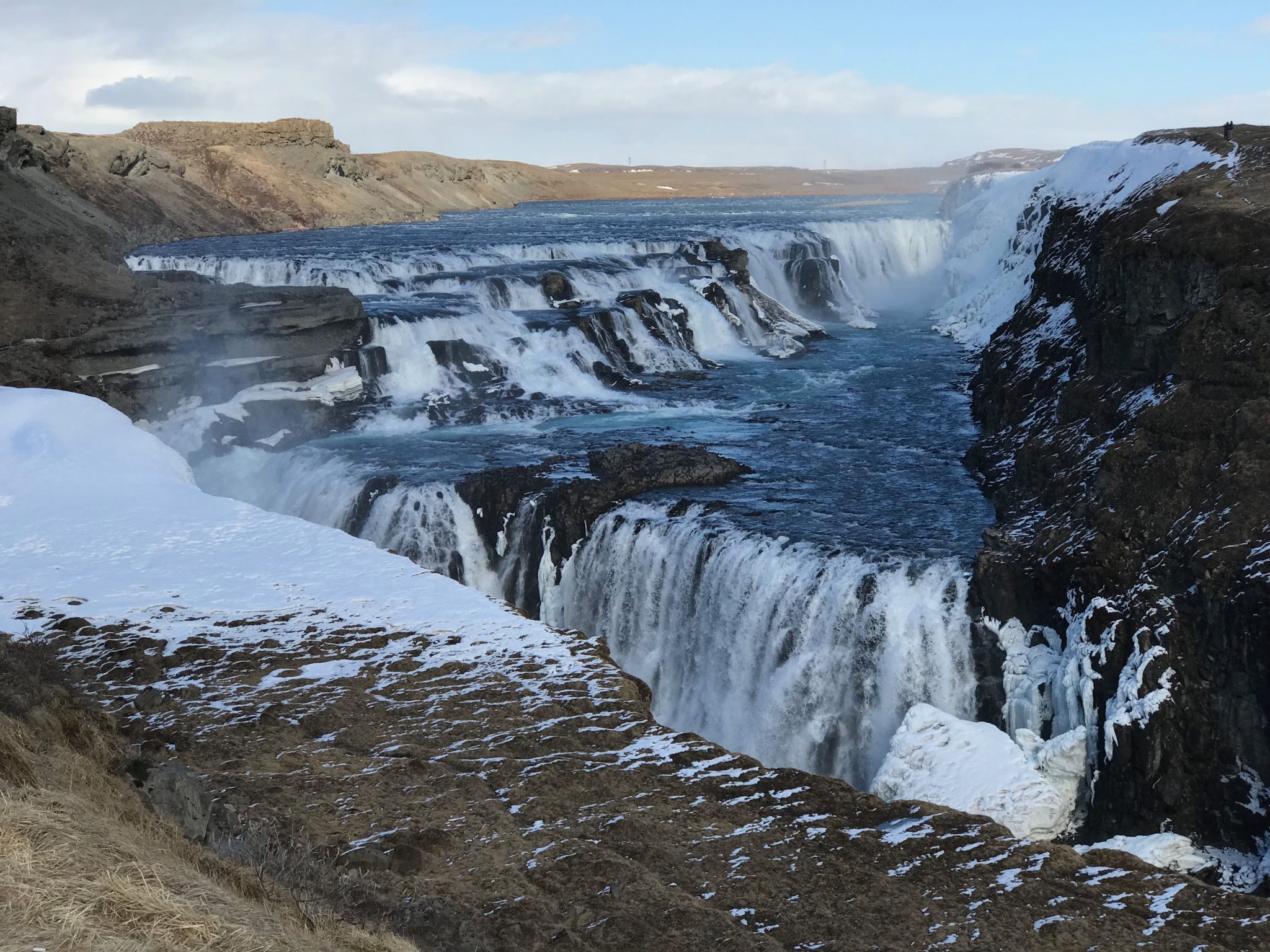 The photo below is looking downstream, showing the crevasse that the water disappears into. 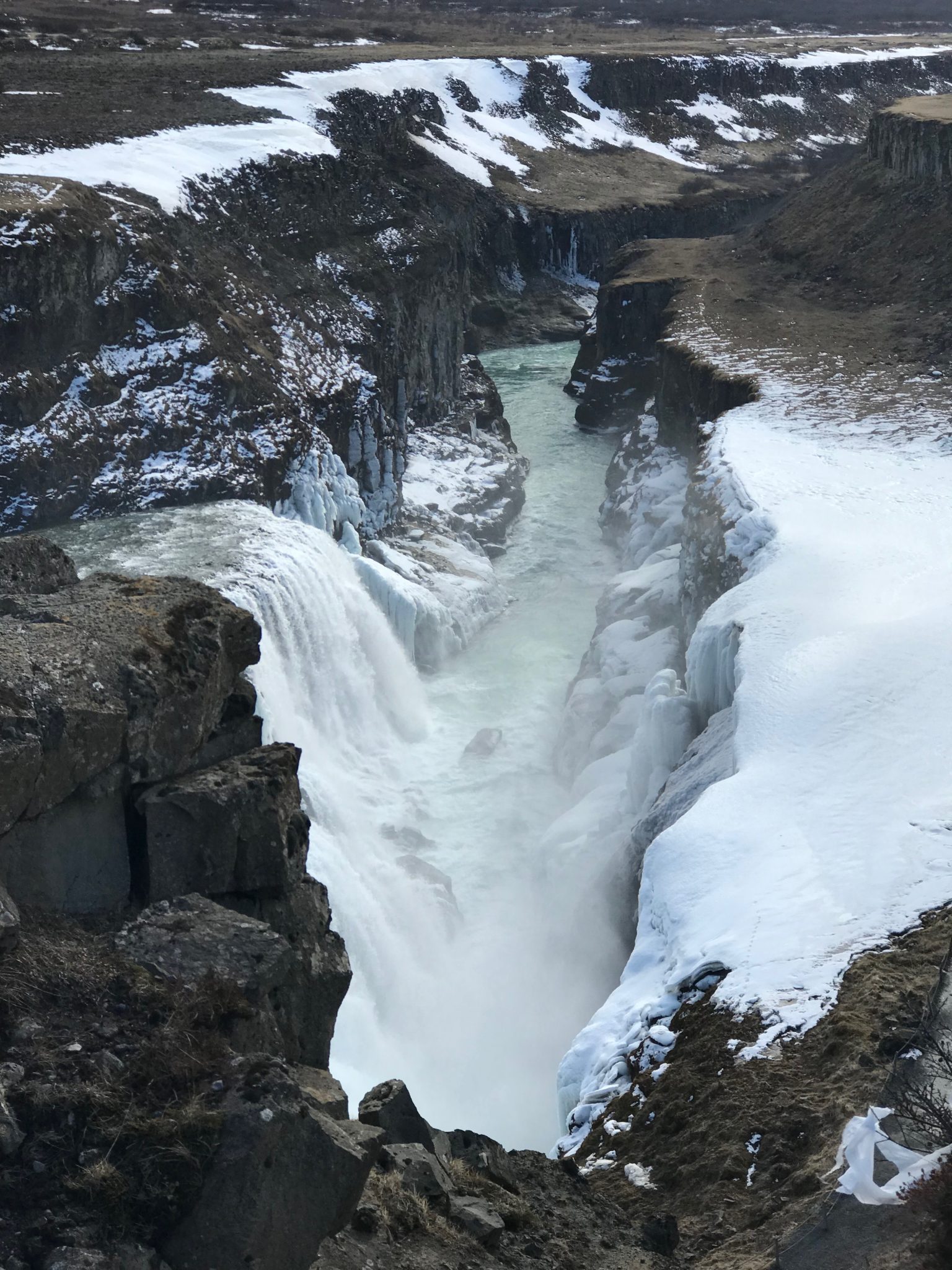 We had clear skies and relatively warm temps for our visit, but the wind made it quite a bit colder. I imagine seeing the waterfall earlier in the year would have been a challenge, and quite a bit colder. My wife braved the cold and wind with a smile. 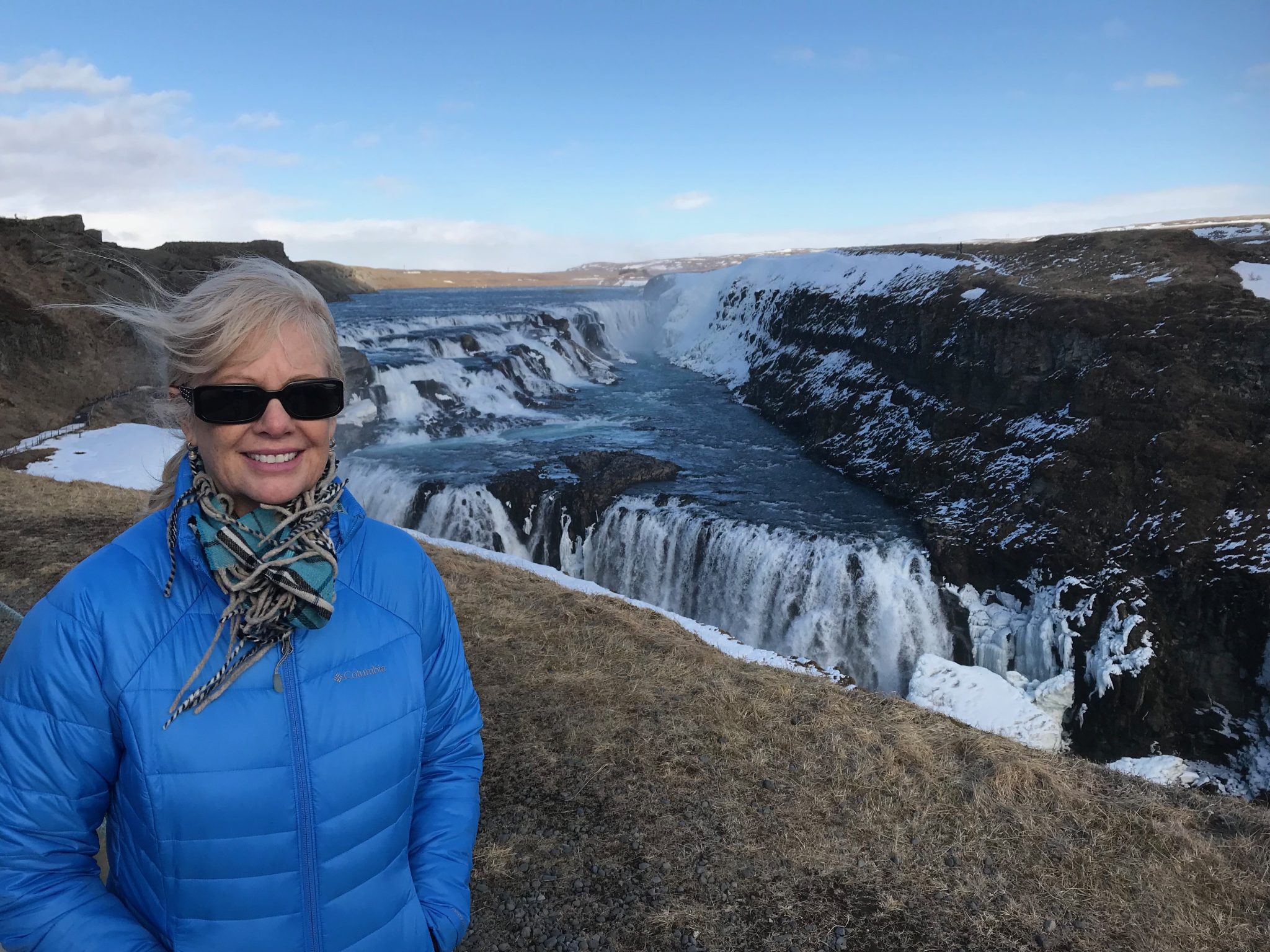 As we were driving from Gullfoss to dinner, Olaf made a quick stop at a horse corral to introduce us to a few Icelandic horses. Icelandic horses are unique in several ways. They have five gaits instead of the three normal ones of walk, trot and gallop; our guide said this was because they had evolved in the lava strewn fields of Iceland and had developed different gaits to cope. One of the extra gaits is known as the “flying gait” where the horse can hit 30 miles per hour. The horses also by law cannot not be brought back into Iceland once they have left the island and other horses cannot be imported. 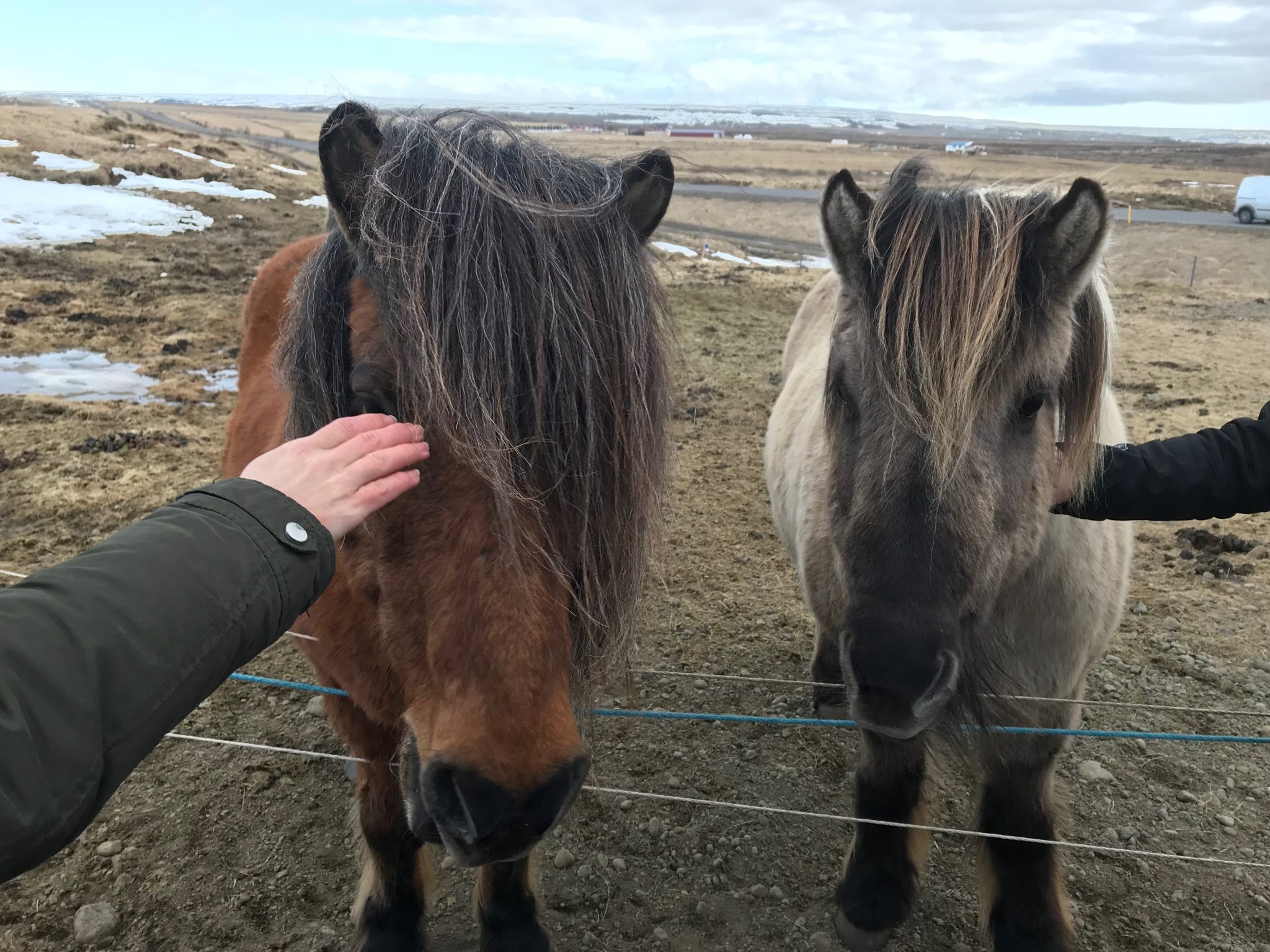 There were three that would come up to be fed (and tolerate being petted) and two that stood in the back. These two were new, and didn’t understand that the crazy humans were offering snacks in exchange for a bit of petting. 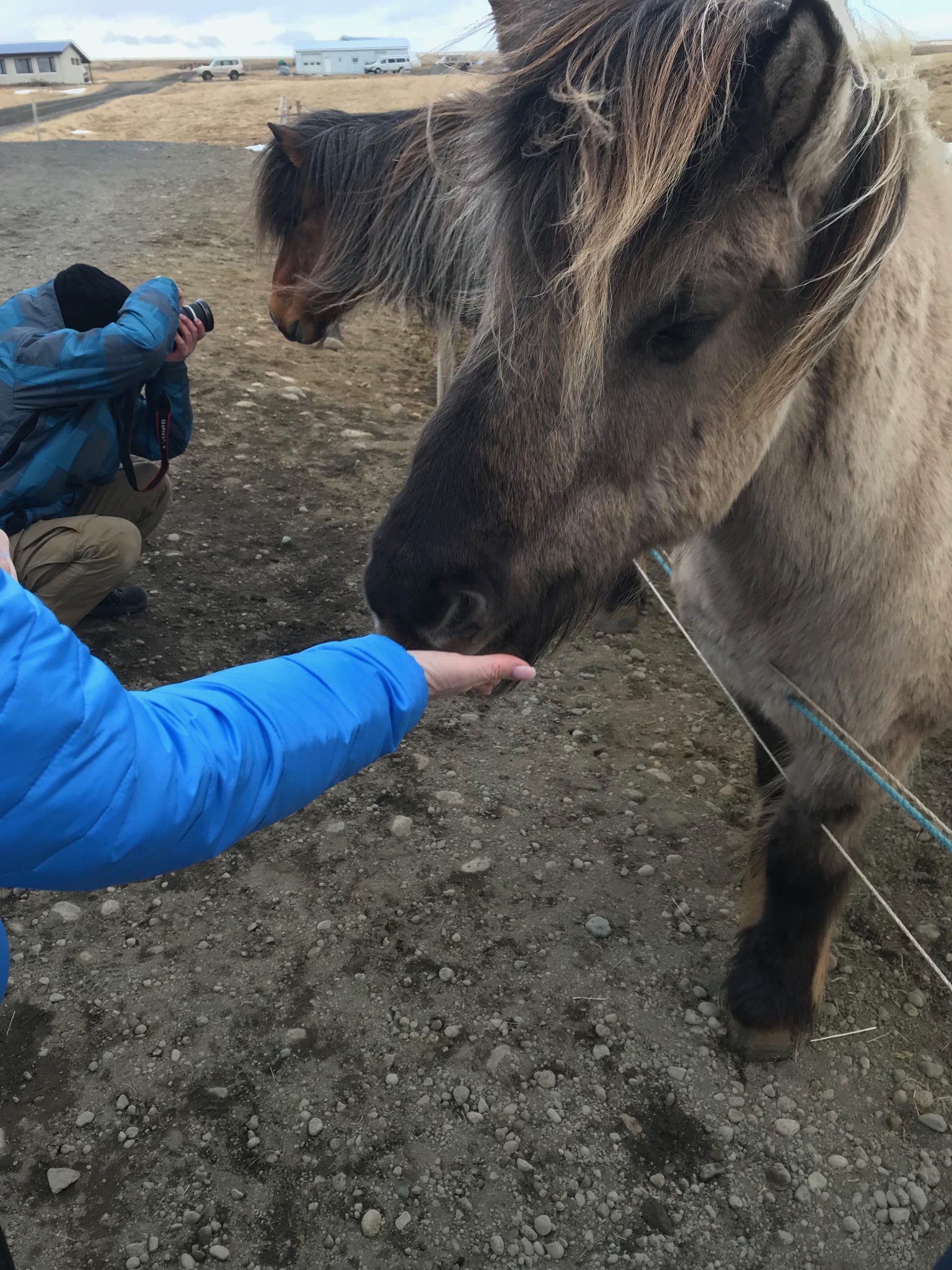 After a nice dinner at Café Mika in Reykholt, we headed for our final stop.

We didn’t have the Blue Lagoon on our itinerary, as it was described to us by one and all as being a crowded tourist trap. There are plenty of other geothermal springs to swim in. Stopping at the Secret Lagoon was a great end to our Golden Circle tour, and, even though Olaf described it as “no-so-Secret anymore”, we didn’t have to deal with crowds or tour busses. The Secret Lagoon is the oldest swimming pool in Iceland, its name Gamla Laugin means “old pool”. 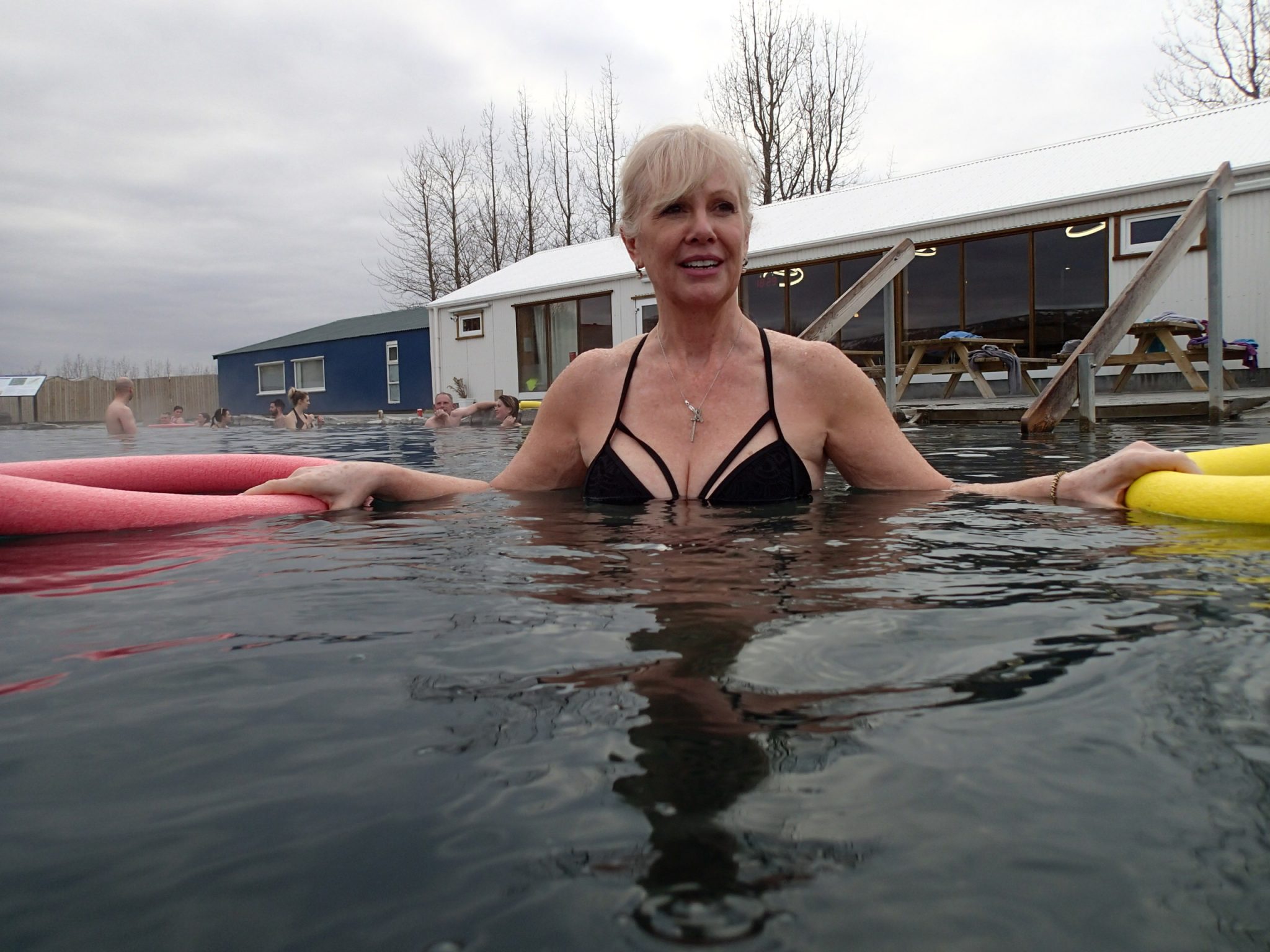 We packed light, which did not include towels. Entry was included in our tour, and towel rental was reasonable (one of the few reasonably priced purchases we encountered while in Iceland) . I followed the Icelandic lagoon  hygiene tradition of showering  in the buff before going in (I was told the ladies on our tour did NOT!), got our two floats and relaxed. 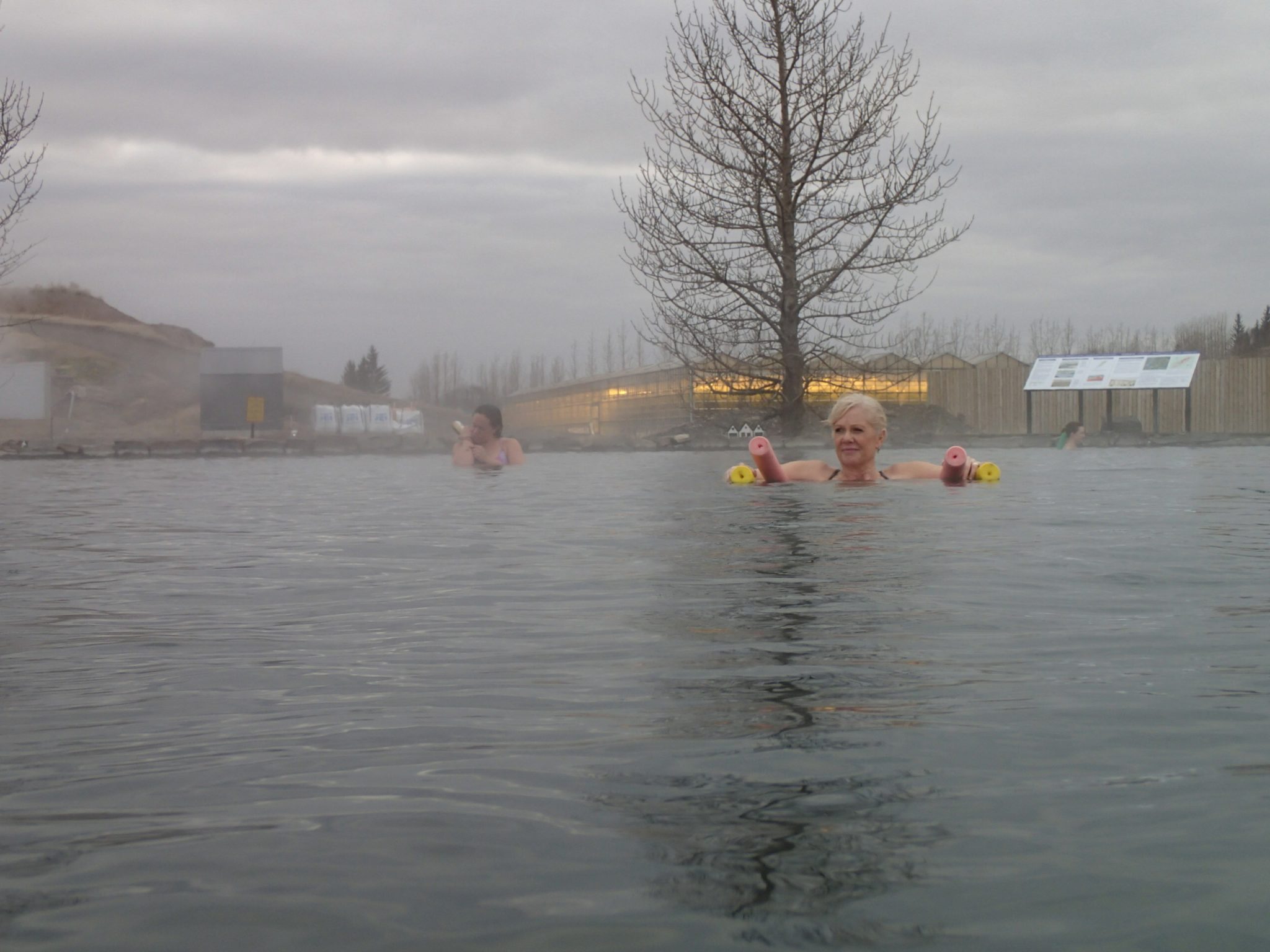 The lagoon was much warmer in spots (most likely where the water was coming in) but it was a relaxing prelude to sleeping in the Buubble.

We took a short detour to stop at Faxi Falls, one of the many small waterfalls in the Golden Circle and one we could walk right up to. 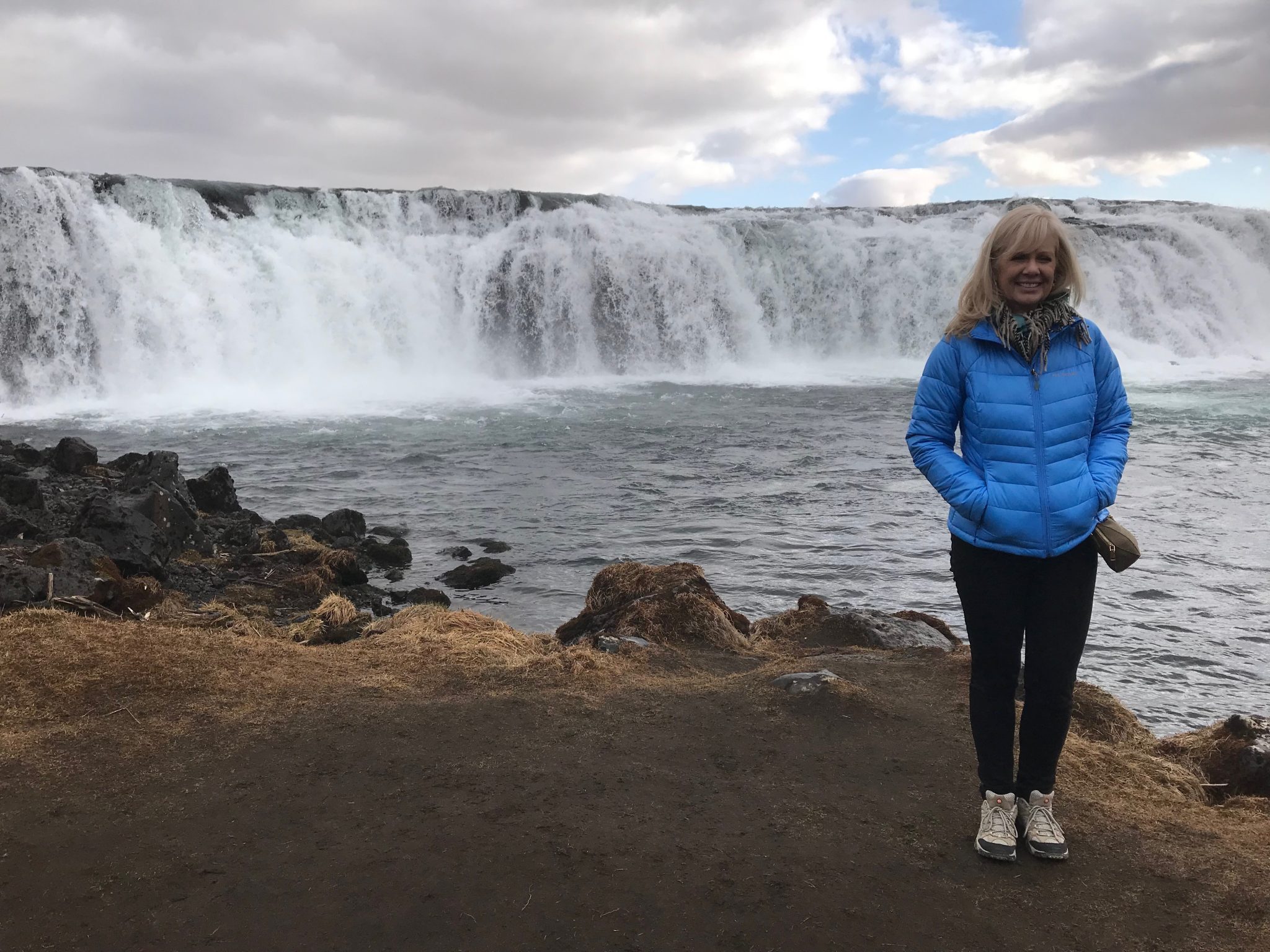 There are lots of these “little” waterfalls all over Iceland, many easy to approach. 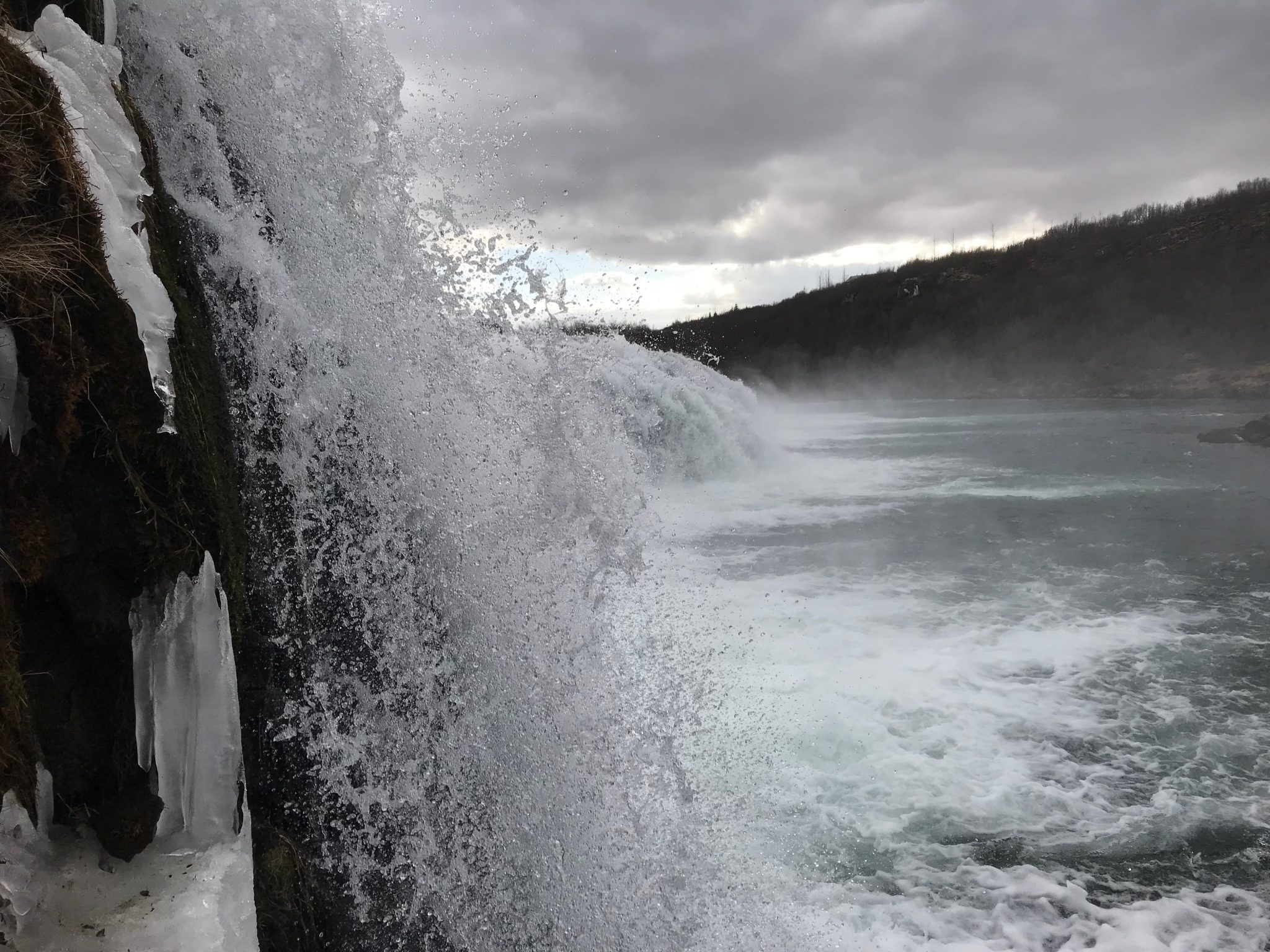 Now nice and warm (and showered!) we headed for our night in a Buubble.
[poet-badge]