As we were starting our journey to Iceland, my lovely wife and I were in an Uber, leaving RWDevCon in Alexandria, VA and heading to Dulles Airport for our flight to Reykjavik. The driver asked where we were going, and when we mention Iceland he asked “did Bobby Fischer live there and is he still alive?” Reykjavik was, of course, the site of the World Championship Chess tournament between Fischer and Boris Spassky of the U.S.S.R. (remember them)? I knew Fischer had died a while back, but I could not recall if Spassky was alive. A quick internet search not only showed that Spassky was indeed alive, but that there was a museum about Bobby Fischer in Selfoss, Iceland.

The Bobby Fischer Center was our destination as we escaped from high winds and rain on Snæfellnes Peninsula. 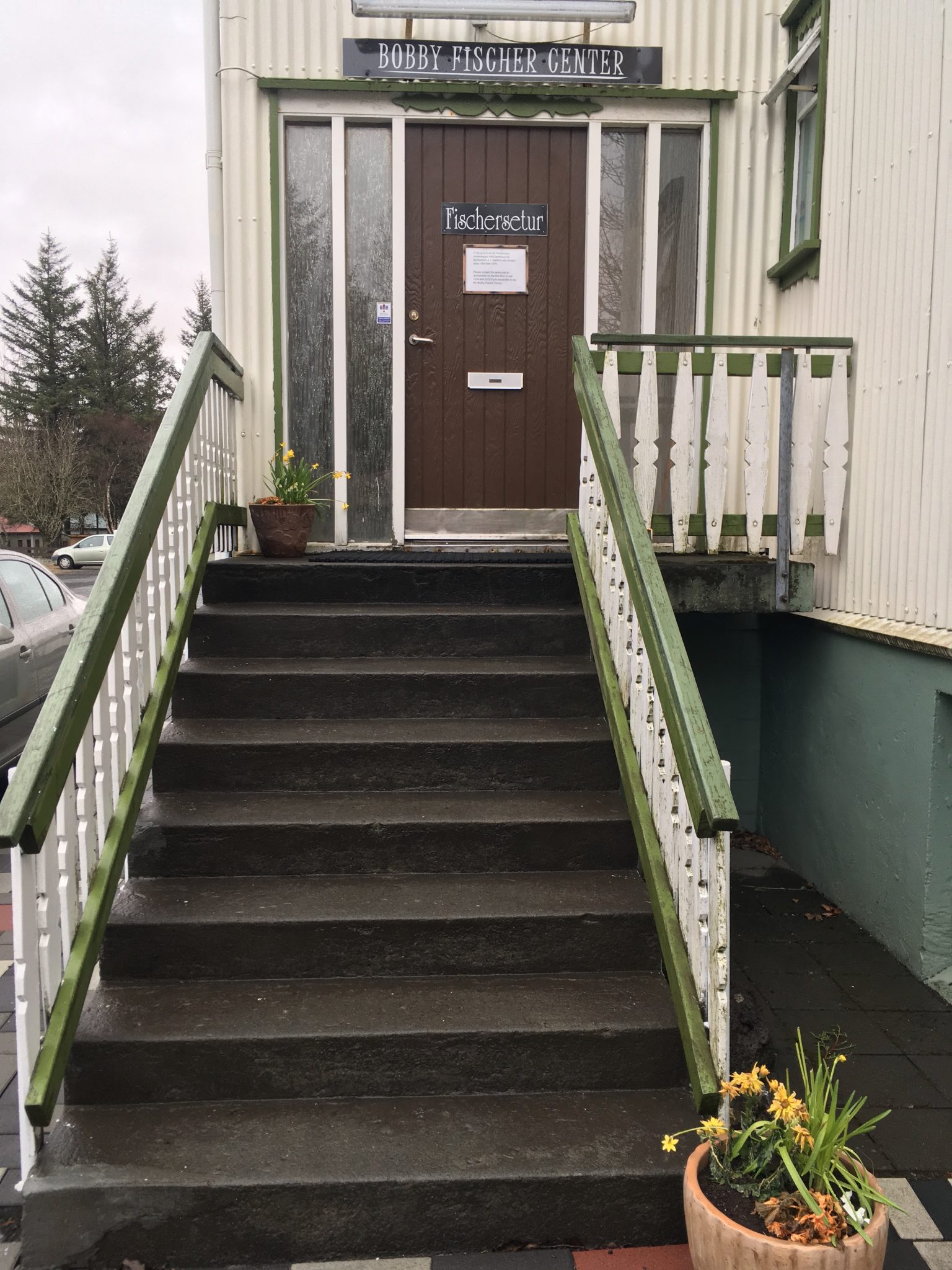 The story of how Bobby Fischer ended up spending his last days in Iceland plays out like a historic Icelandic saga, filled with twists, battles and tragedy (and in some people’s opinion there were also trolls and bad kings!). Fischer was, of course, an American chess prodigy, winning eight US Championships between 1957 and 1967. In 1972 he played Spassky for the World Chess Championship in Reykjavik from July though September,  winning 12 1/2 to 8 1/2 and becoming the 11th World Chess Champion.  He broke a string of Soviet World Chess Champions that had started in 1948. 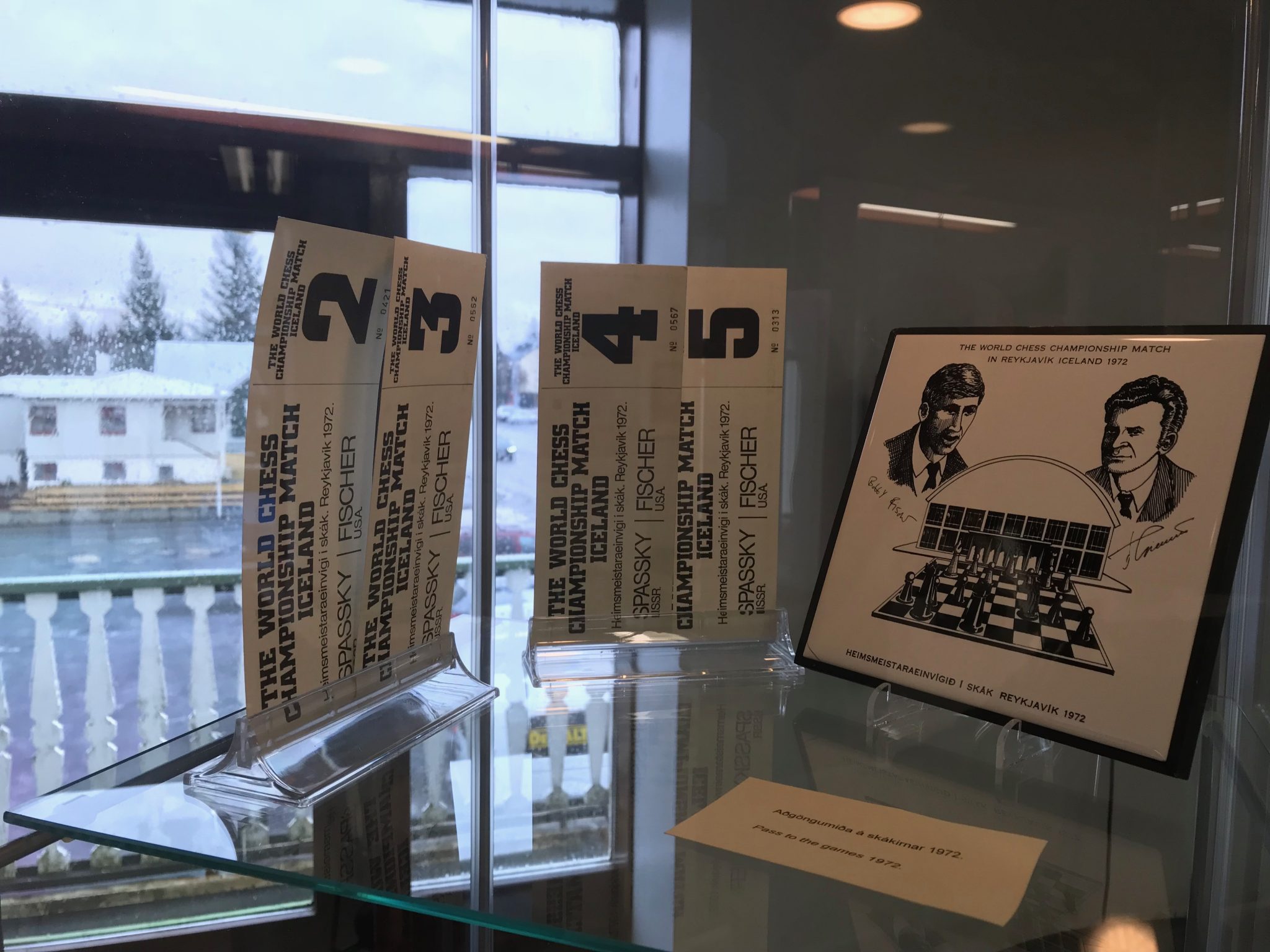 Fischer held the title until 1975. He made three non-negotiable demands to the rules to be used in what was to be his championship match against Anatoly Karpov –

The ruling body (FIDE) approved point 1 but not the other two. Fischer didn’t budge. FIDE then approved the no games limit, but would not approve the tie rule. This ended in Fischer resigning as World Chess Champion. 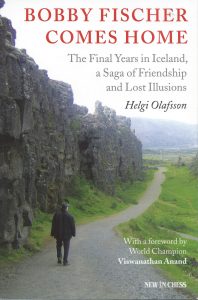 He disappeared from the chess scene for a long while, then reappeared in 1992 to play Spassky again in Yugoslavia. There was a UN embargo, and the US warned Fischer that he would be violating the law. He played anyway, beat Spassky, and a warrant was issued for his arrest.

In July 2004 Bobby Fischer was arrested and detained in Japan, ostensibly for traveling with a revoked passport. He petitioned for Icelandic citizenship, and was granted this by the Althing in March of 2005. He lived out the remaining short years of his life there, dying in January 2008.

I bought the book Bobby Fischer Comes Home (cover to the right) at the Center. The cover photo is a thought-provoking picture of Fischer walking in Þingvellir National Park where we had visited as part of our Golden Circle tour. The author, an Icelandic chess Grandmaster, opens the story with a description of the volcano on Heimay, on the Westman Islands we aimed to visit in a couple of days (thus continuing the cool set of connections that started with the Uber driver!). The rest of the book is a detailed and often rambling account of Fischer’s final years in Iceland (though the author and Fischer broke contact with each other several months before Fischer’s death), describing Fischer as paranoid and difficult to get along with.

The Center is in an unassuming building which is mostly taken up by a flower shop. I finally found the entrance by walking around to the back of the building. I found a sign on the door that said the center was closed, but for access call the phone number provided. When a lady answered the number, she asked where we were from and where were we. As I responded “Texas” and “at the front door” she said she would find someone to come open the door and would call me back. Sure enough, a gentleman drove over, unlocked the door and let us browse through their amazing collection. 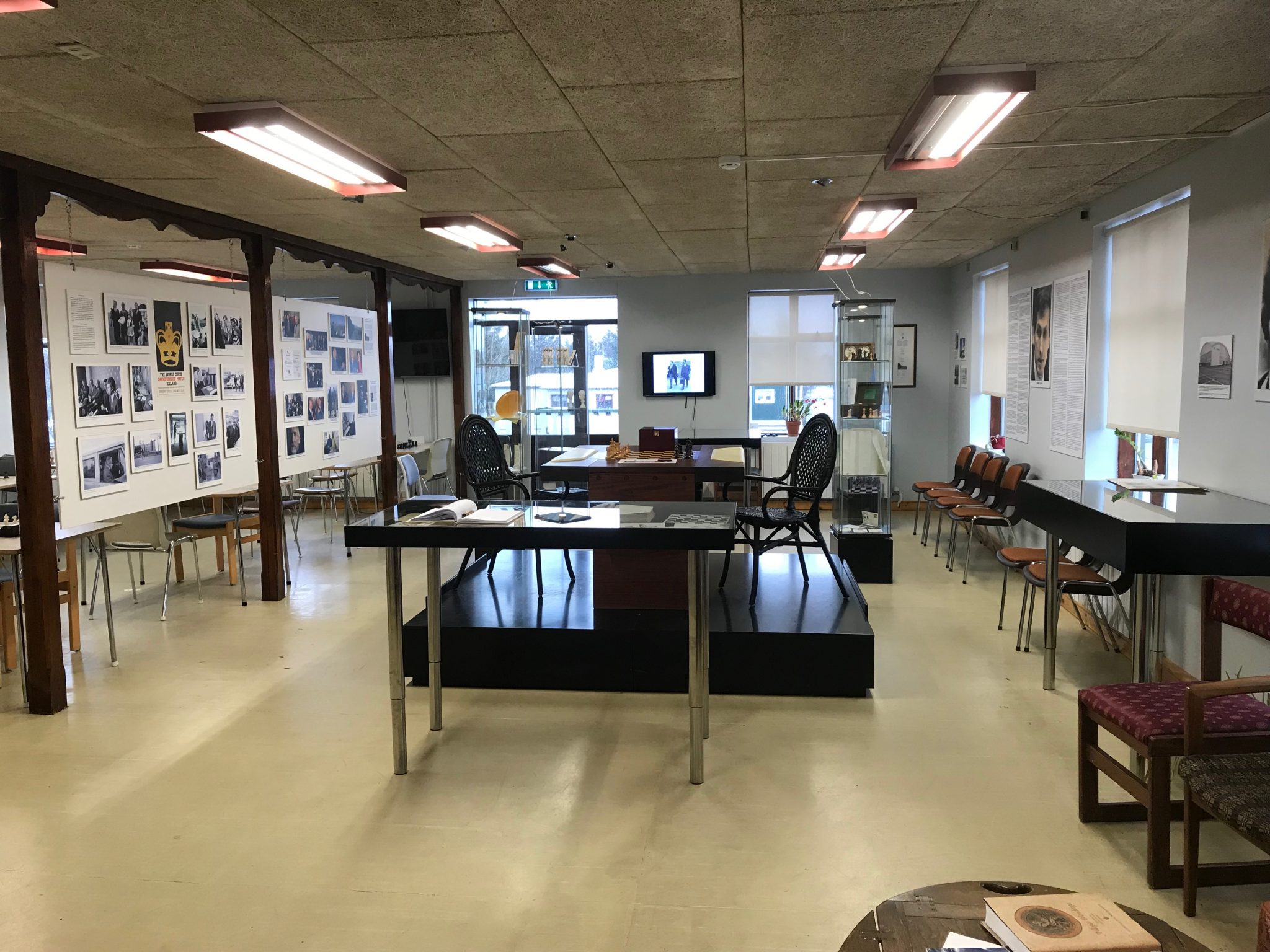 In the center is a replica of the table Spassky and Fischer played on (the original is in a museum in Reykjavik). There are photos, tickets, books, magazine covers, videos…an amazing collection of items from Fischer’s life.  One of the photos we thought most intriguing  is a photo described to be the last one taken of Fischer alive. 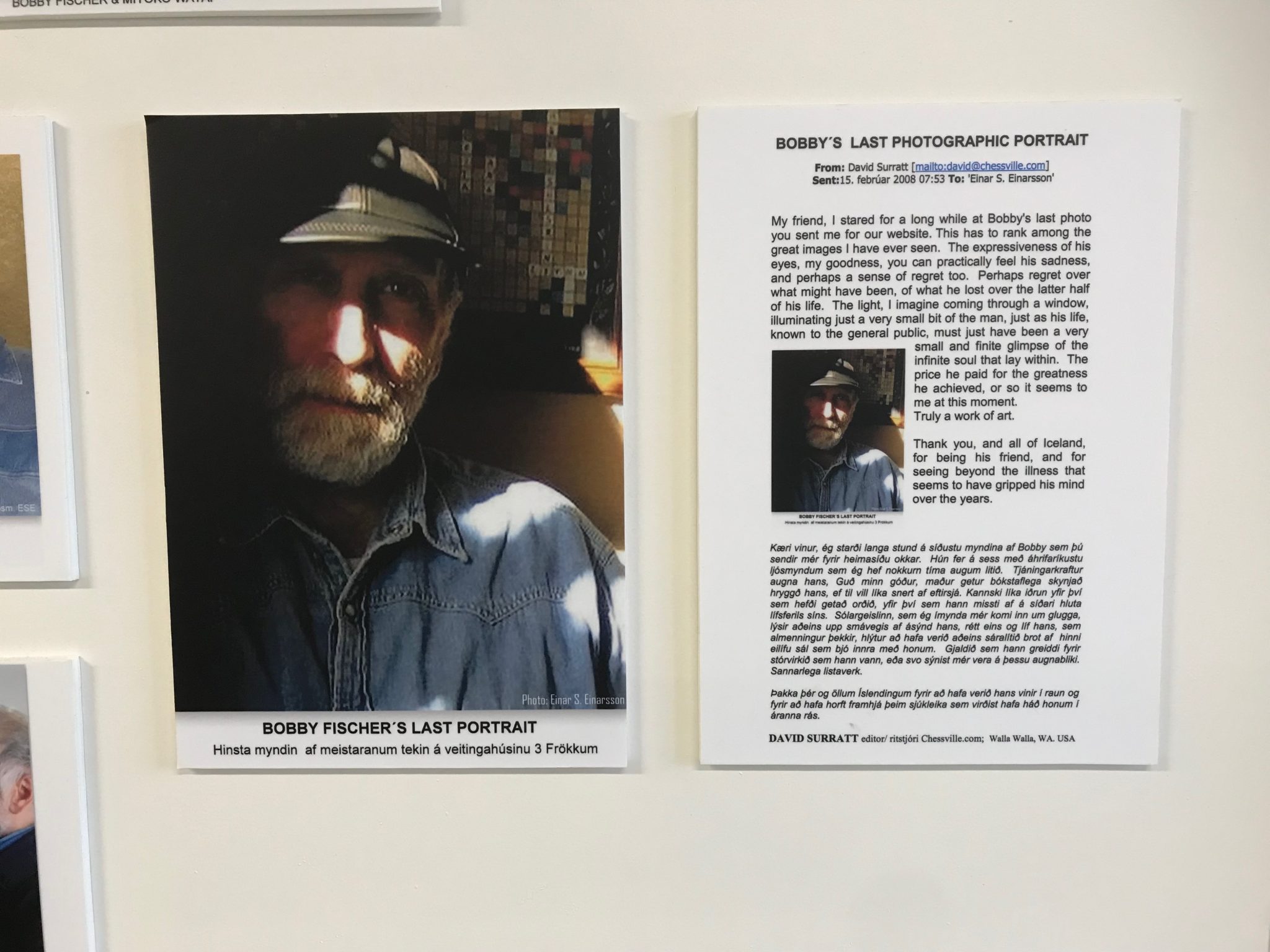 There’s also a chess club that meets at the Center regularly and plays. I’d have a hard time concentrating with dozens of pictures of Fischer watching me play!

As we were getting ready to depart the center, the gentleman who had let us in gave us a card with a map. “This is a map to his grave,” he said. “Just a few minutes from here.” We thanked him profusely for opening the center to Texas off-season tourists, and set out for Fischer’s grave. One wrong turn later, and we ended up near several barns and this very small church in Laugardælir. 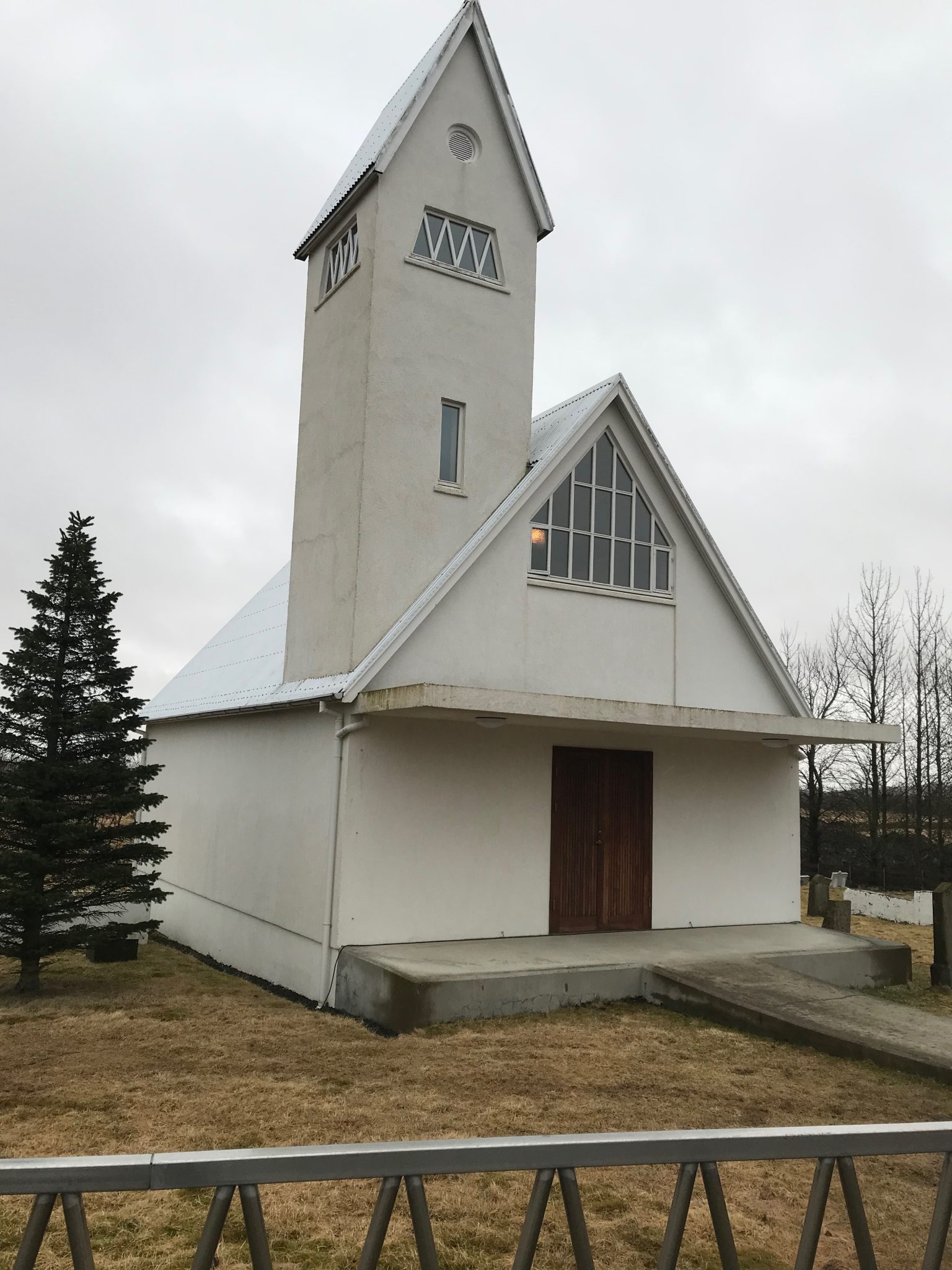 Church of Laugardælir, where Bobby Fischer is buried

It’s very surprising and somewhat sad that a US and World Champion would have such a simple, unadorned burial site, outside of Selfoss, Iceland. 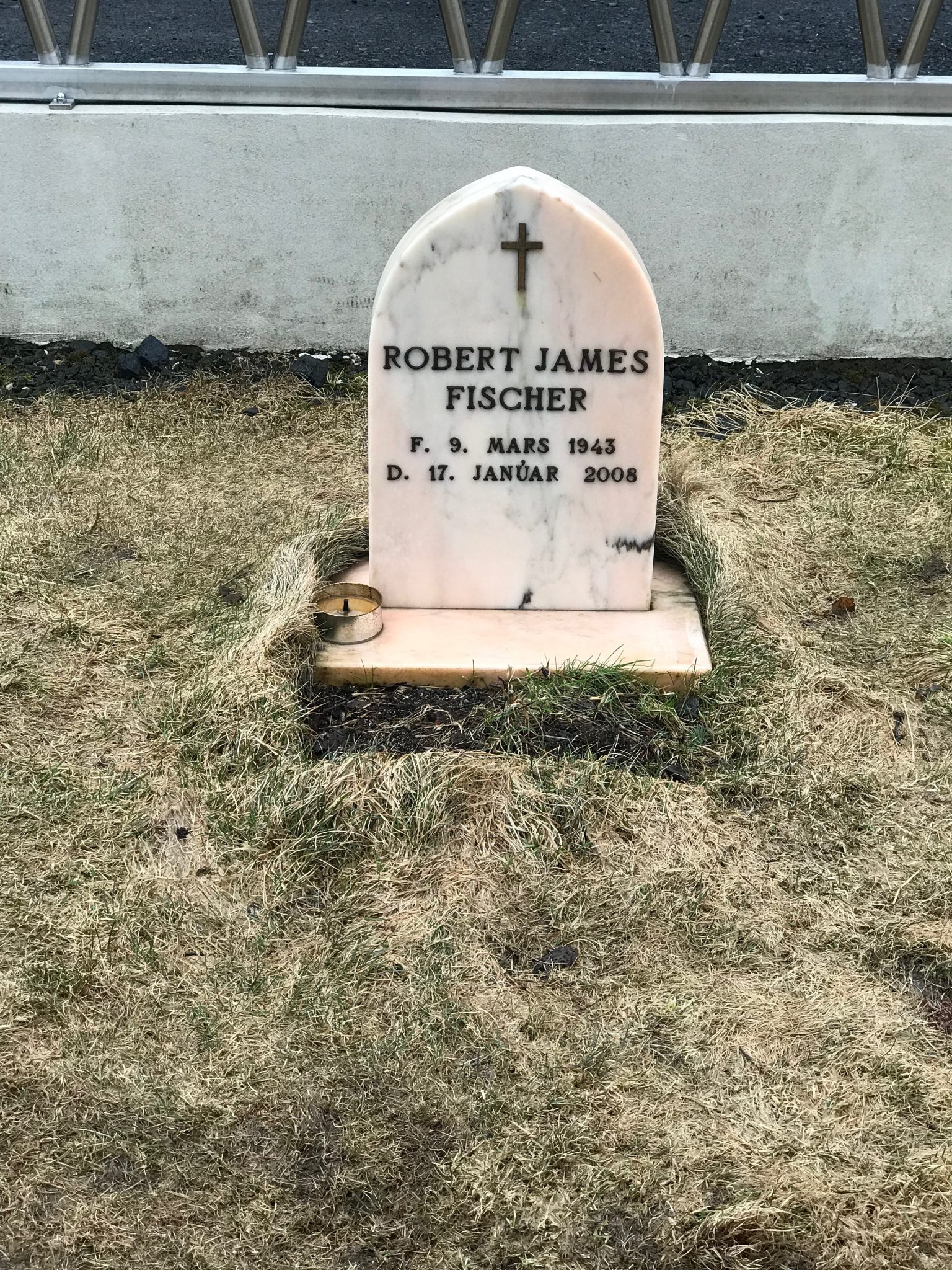 After a long day of driving, we made it to Hella for a meal and sleep. Tomorrow would be another trek along the ring road to the beauty of Glacier Bay.