We awoke determined to get to Jökulsárlón, the Glacier lake in southeast Iceland near Vatnajökull National Park and back to our guesthouse. Our Golden Circle guide Olaf had convinced me it was reachable, and with the cancellation of our whale tour, our mad dash back to the southern part of Iceland had put us and our trusty rental car within reach. 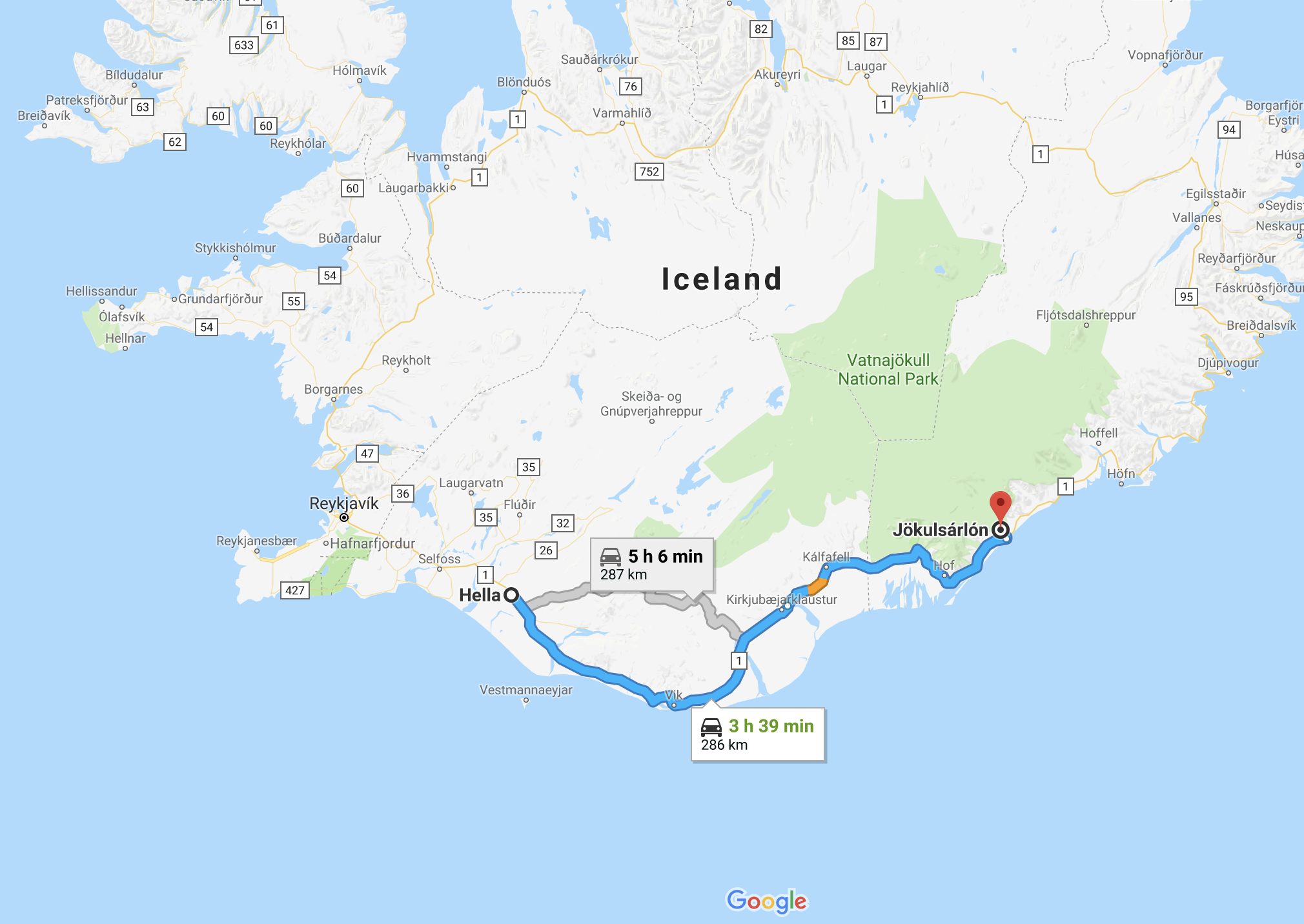 Driving in an alien landscape

I am not sure how common the saying “Iceland is green and Greenland is ice” is, but even though we visited on the tail of winter we could see what they meant. Our drive was mostly along the coast for the first part, then headed across lava fields old and new. The older ones were certainly green, with weather-worn lave boulders covered with green moss. 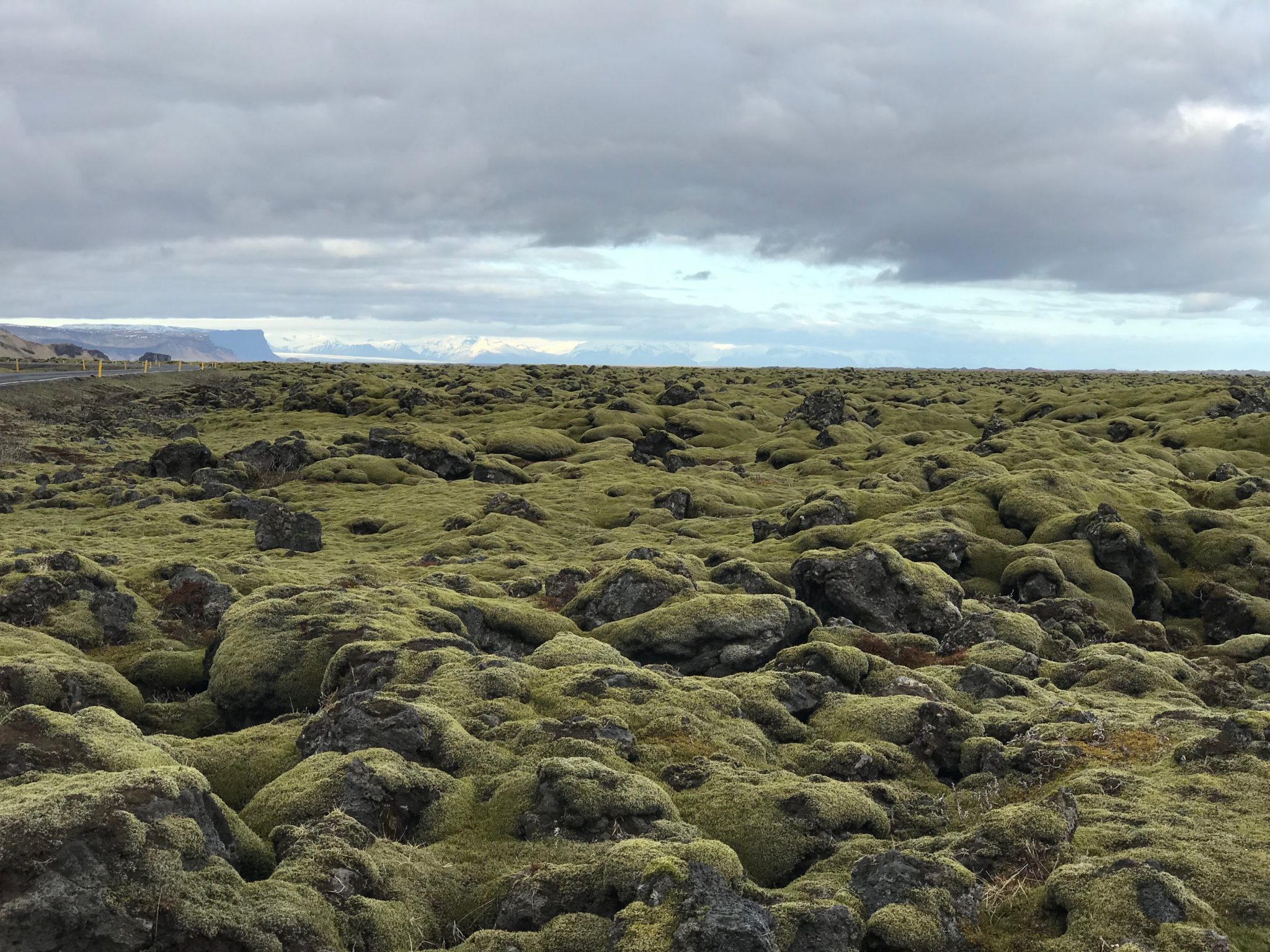 Other parts featured nothing but black rock lava fields to either side of the road. 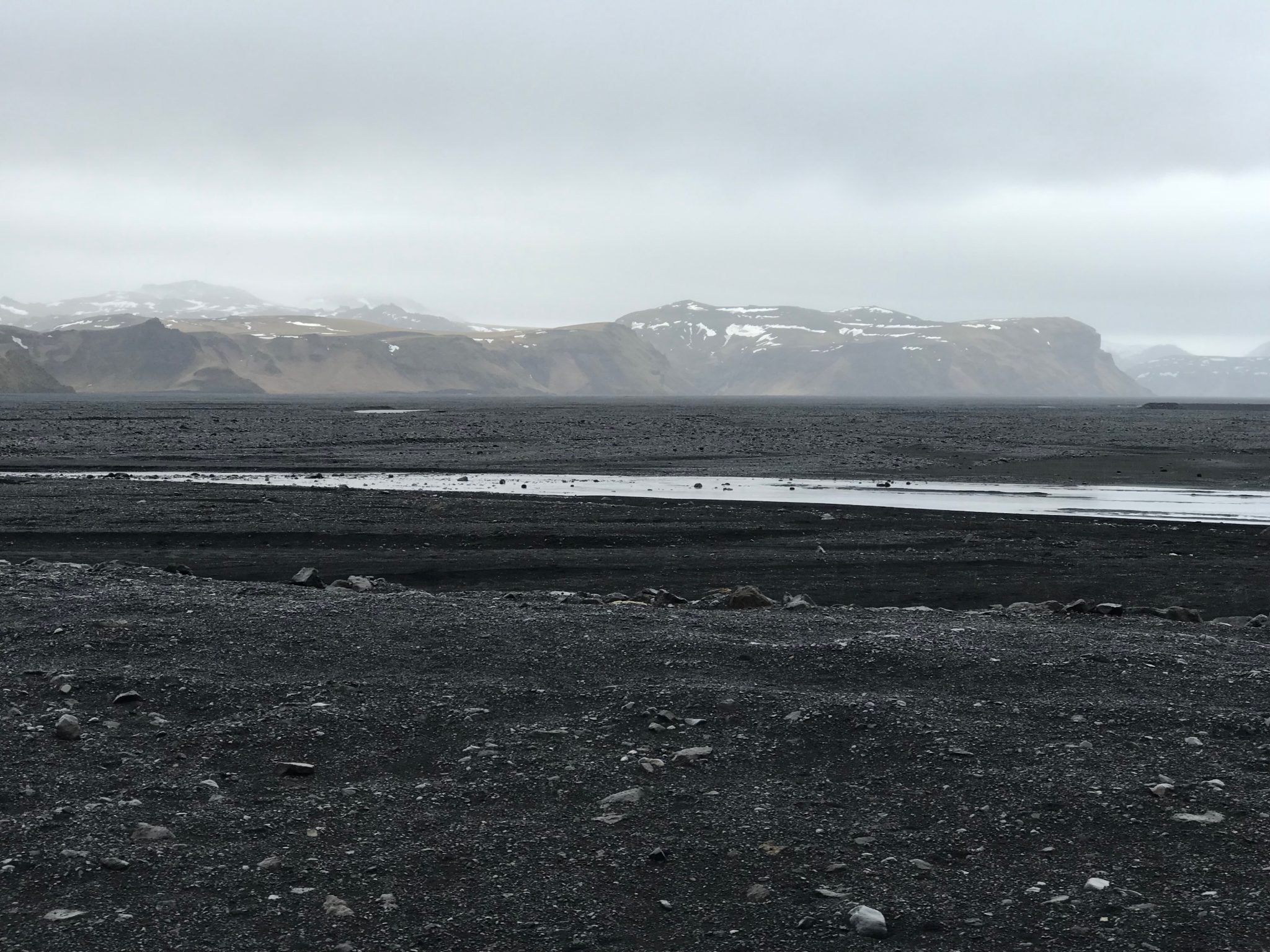 Unbeknownst to us we were driving through an area that make up part of the Katla Geopark. The descriptions on the Katla Geopark website called the area where the lava rocks are covered with green moss Skaftáreldahraun (Skaftá-Fires), the result of two of the largest lava flows that have occurred on Earth in recorded history.

There are obviously a lot of volcanos in Iceland. It reminded me a lot Hawaii (without the ice and snow), where people purposefully live on active volcanos. When we were on our Golden Circle tour, our guide Olaf told us of the volcano Hekla, which is overdue for an eruption, given its regularity. It has been erupting every 10-20 years, and with its last eruption in 2000, it is about time. Three other volcanoes have erupted in Iceland since the year 2000, with the most recent being Bárðarbunga in 2015. Bárðarbunga is the second tallest mountain in Iceland, and is located under Vatnajökull, the largest glacier in Iceland. One of its outlet glaciers empties at Jökulsárlón, where we were headed.

We could tell we were getting closer when we saw the glacier leaking out .

This was one of those drives where the destination seemed to be right around the corner. We passed a couple of hotels called “Glacier Bay hotel” but still weren’t there. Then we came across some parking lots with people walking up and over a berm. We stopped and got our first glimpse. 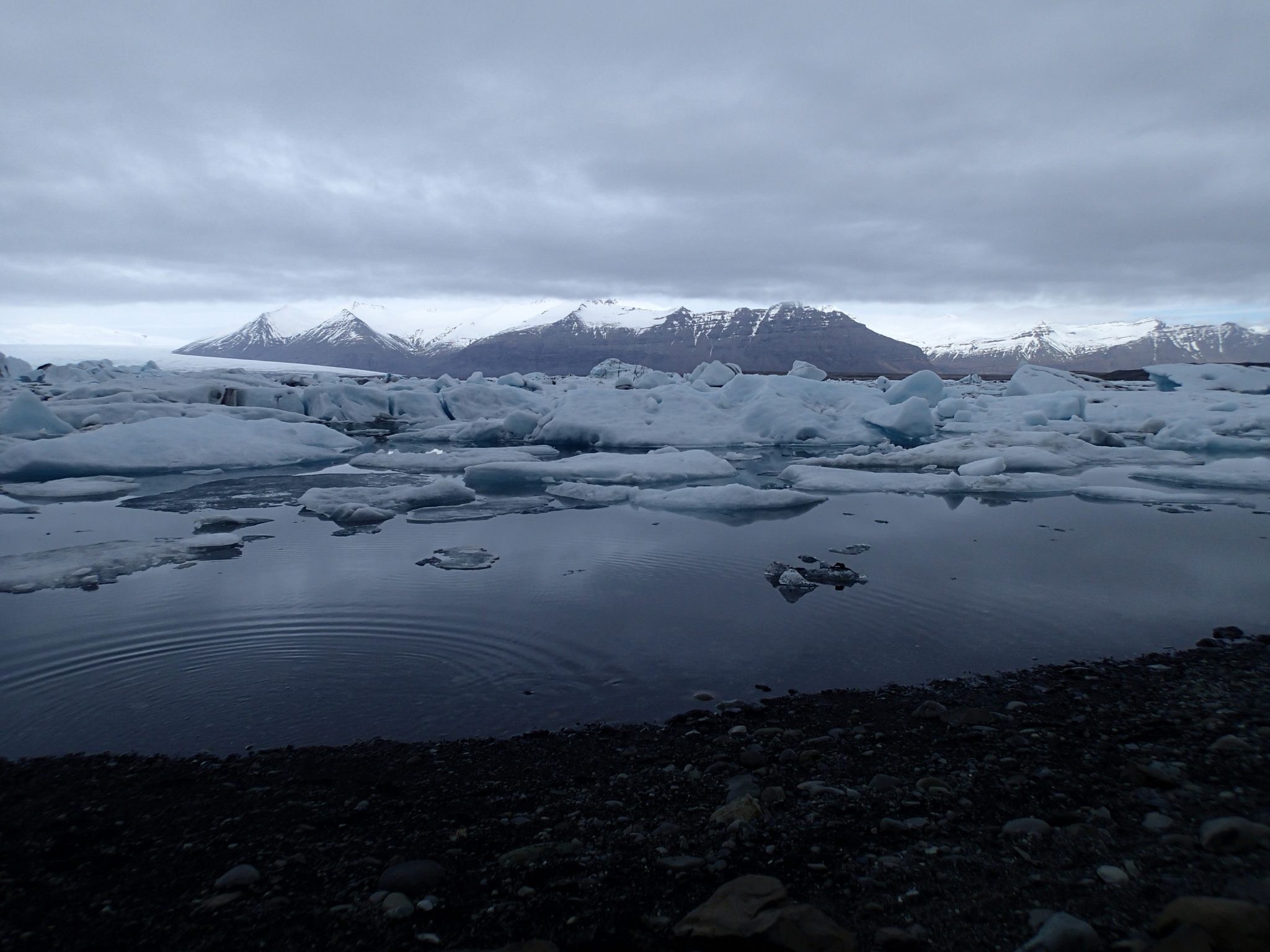 We were quite aways from where the lagoon emptied into the ocean, but there was still the water was moving. It seemed to do this all along the shore as we walked around the lagoon.

Of course, we found a place of stillness and skipped rocks across the glass-like surface. 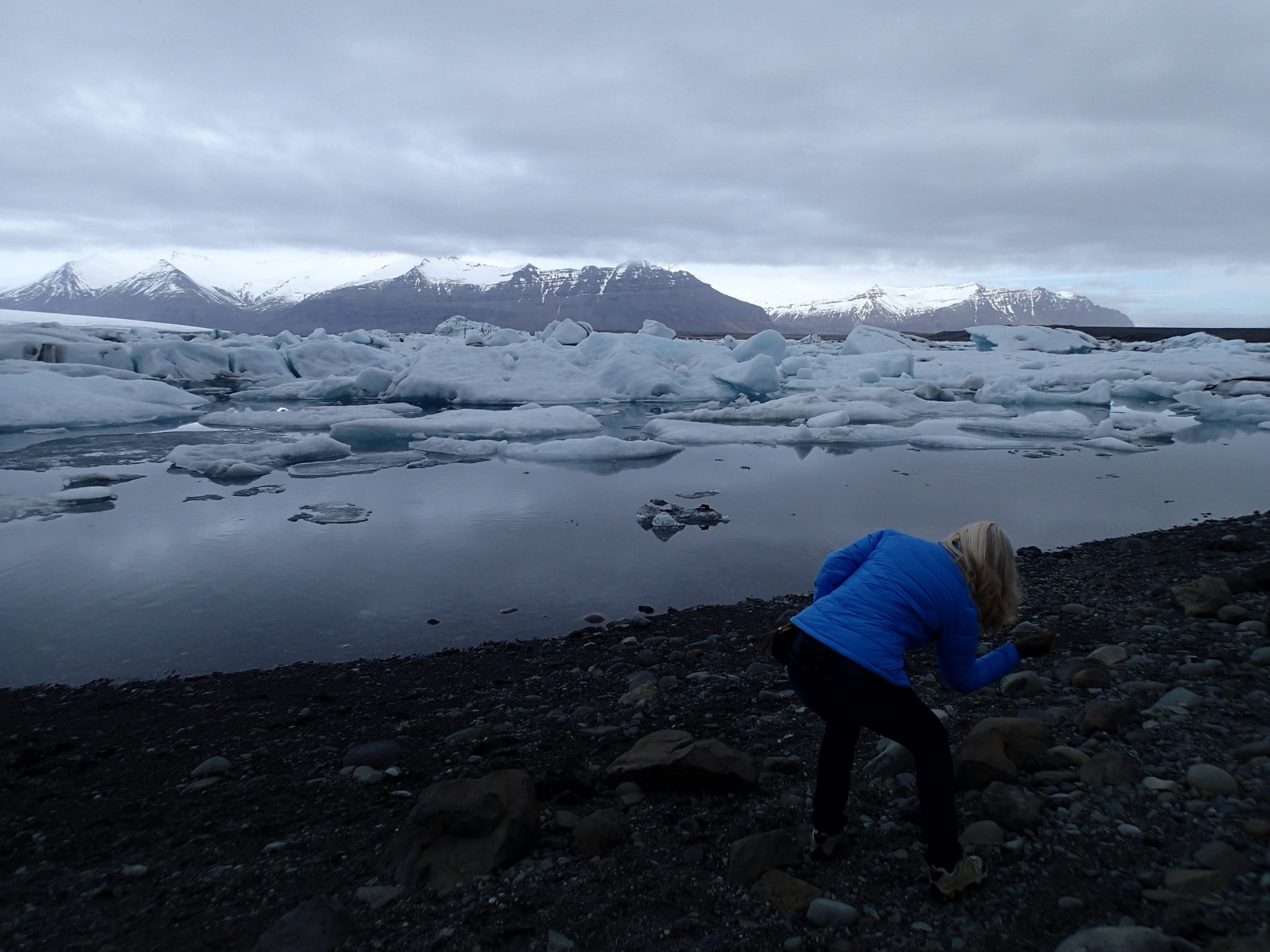 We got back in the rental car and drove across the bridge to the main parking area of Jökulsárlón. The sky was clearing from the overcast that had followed us for a couple of days.

The lagoon is huge; according the signs it was 15 square kilometers in 1998 and still growing. And, in some places, it was 190 meters deep. 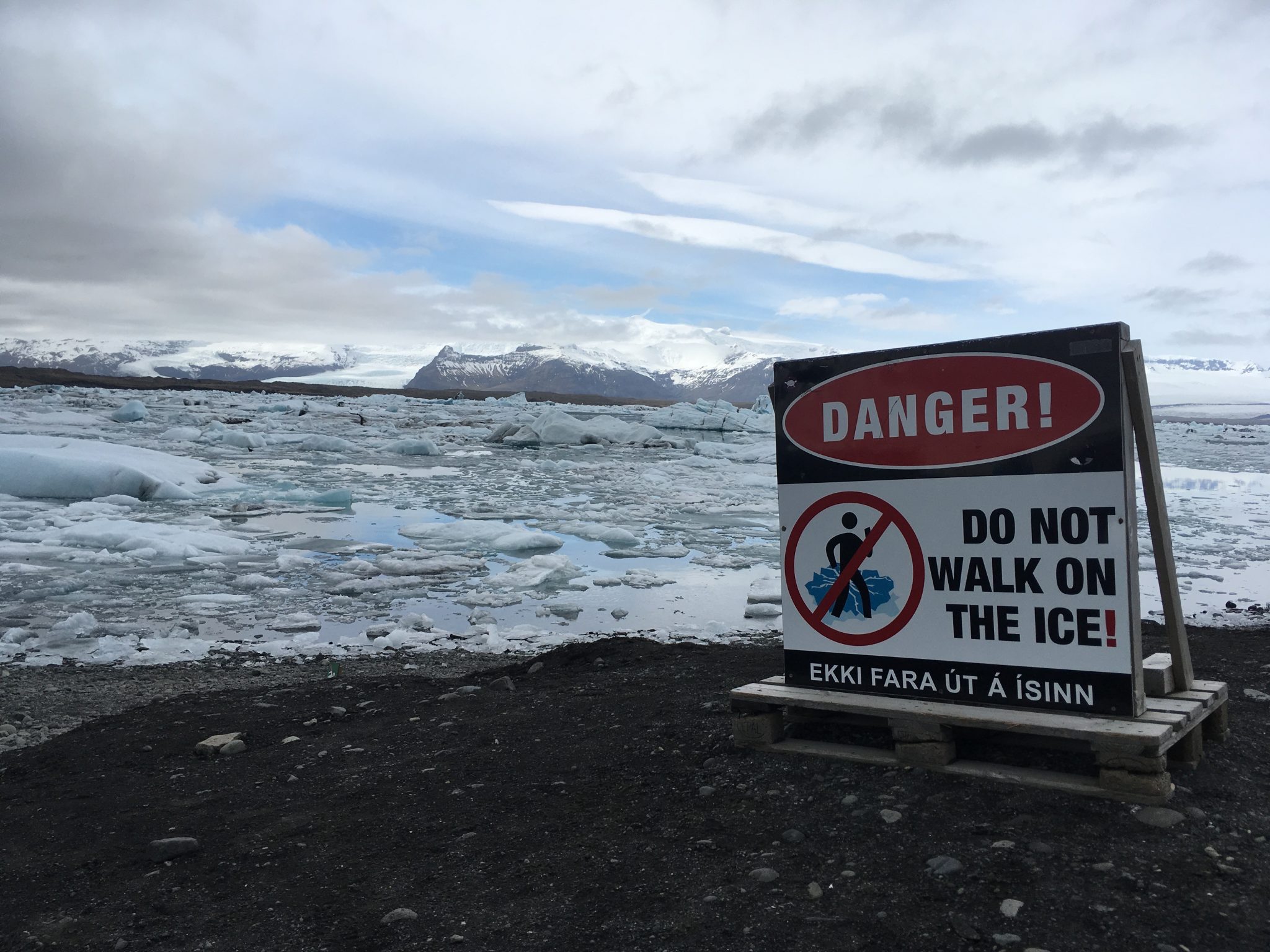 We hiked around the lagoon for a bit; it would have been a great (but long) hike to go all the way around. Across the lagoon we could see tire tracks on the glacier, apparently where some tours went. 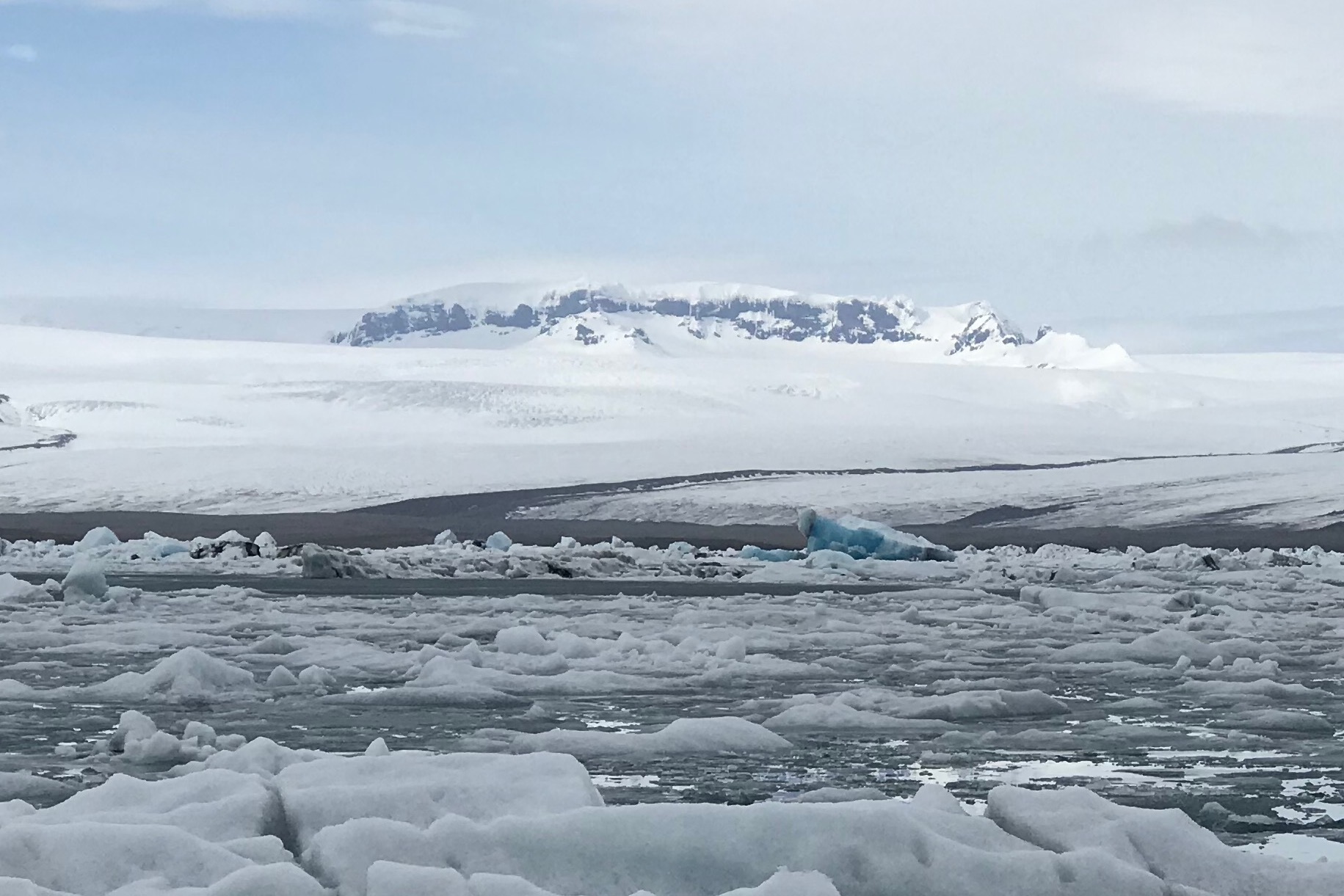 Some of the icebergs were a deep blue

The lagoon formed here when the glacier began retreating. According to signage at the lagoon, when the first settlers arrived in Iceland the glacier was much closer to the sea, but a warm period from 1920 to 1960 saw the glacier retreat and left the wide, deep lagoon in its place. 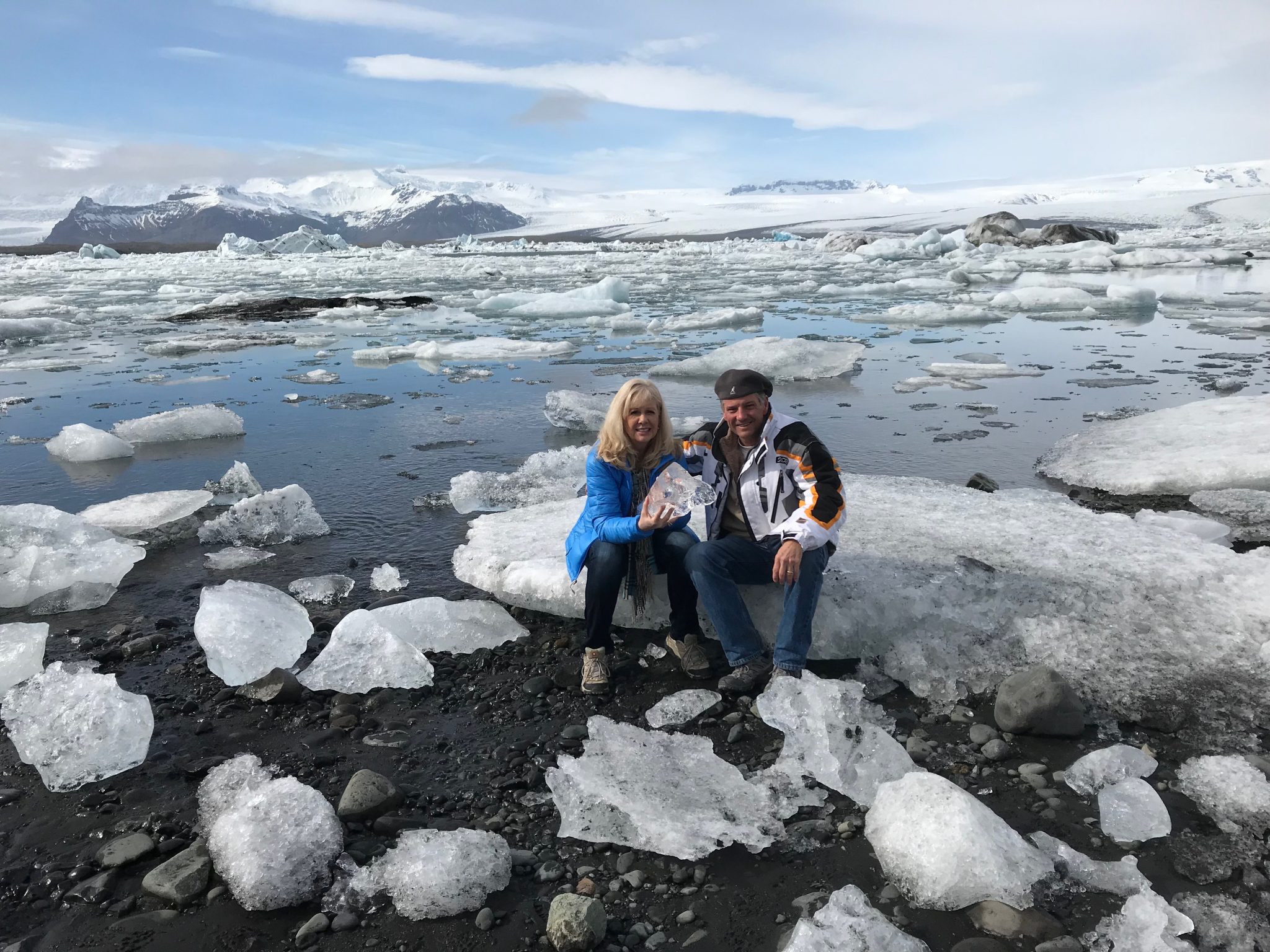 We saved this iceberg from floating out to sea!

The sign also says from 1890 to 1998 the glacier retreated 3.8 kilometers. Icebergs break from the glacier and erode from scraping the bottom of the lagoon, plus wind and tides. Once they are small enough they float out to the sea. 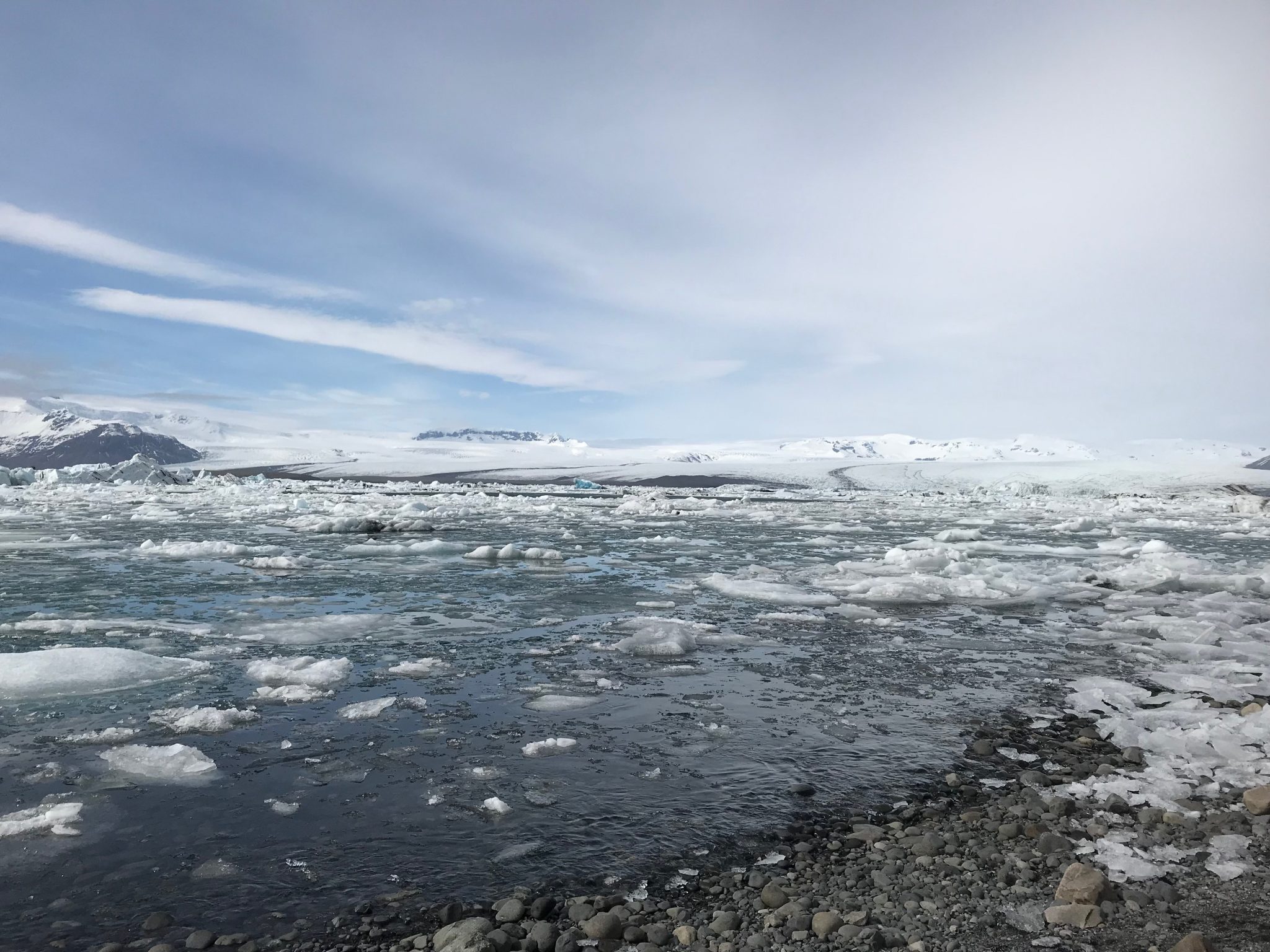 Paths in the background on to the glacier

Icebergs vs. Waves and Tides

We went across the bridge and toward the ocean, to see all of the icebergs that had tried to escape but could not. 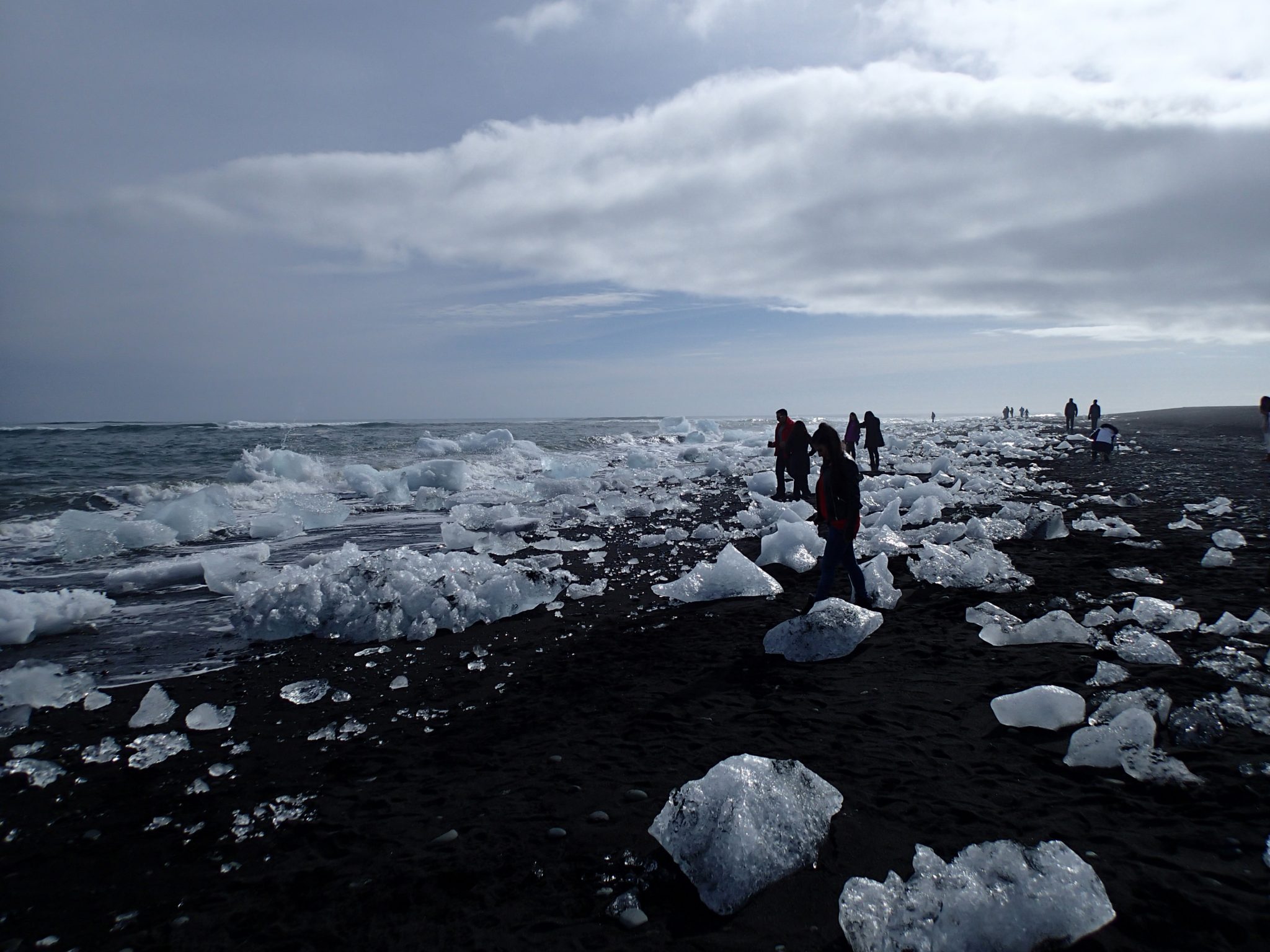 Ice On The Beach

There were several blue icebergs just off the shore, obviously stuck on the bottom, constantly pummeled by the waves.

The tides were fascinating (at least to us!). We watch one large iceberg go back up the channel, under the bridge and back into the glacier bay. There was a current coming from the left in the video (we assumed it was the current from the ice melt) that pushed the ice all to the right.

Driving back the way we came, we had passed a small restaurant at the “Glacier Lagoon.” This was a mostly land-locked body of water where you could take rides out to the middle of the lagoon. Those small slivers by the iceberg are indeed boats. 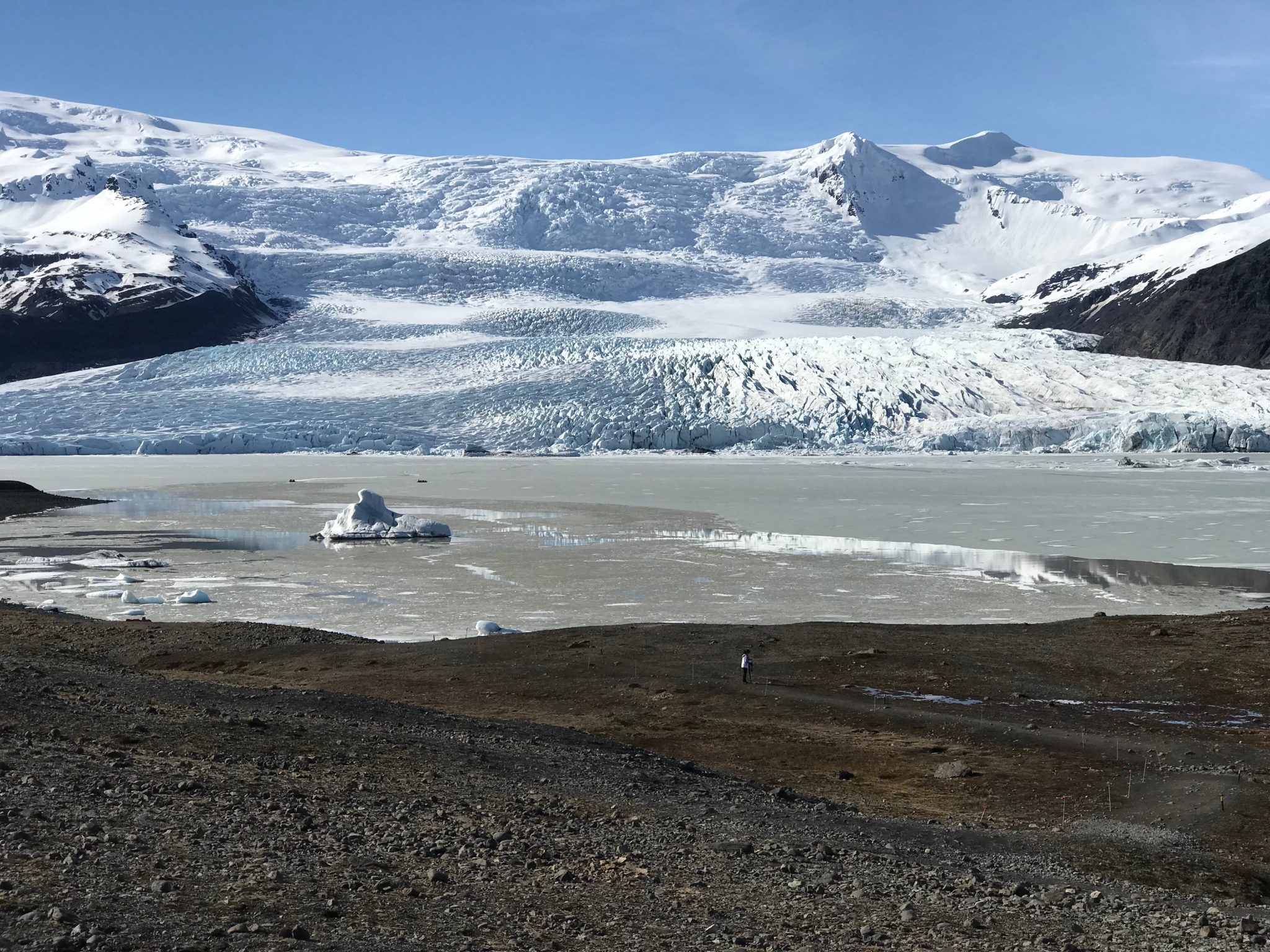 As you can see from the photos, the sky had cleared brilliantly from the time we got to Jökulsárlón to the time we left. Both overcast and clear skies made for amazing scenery. 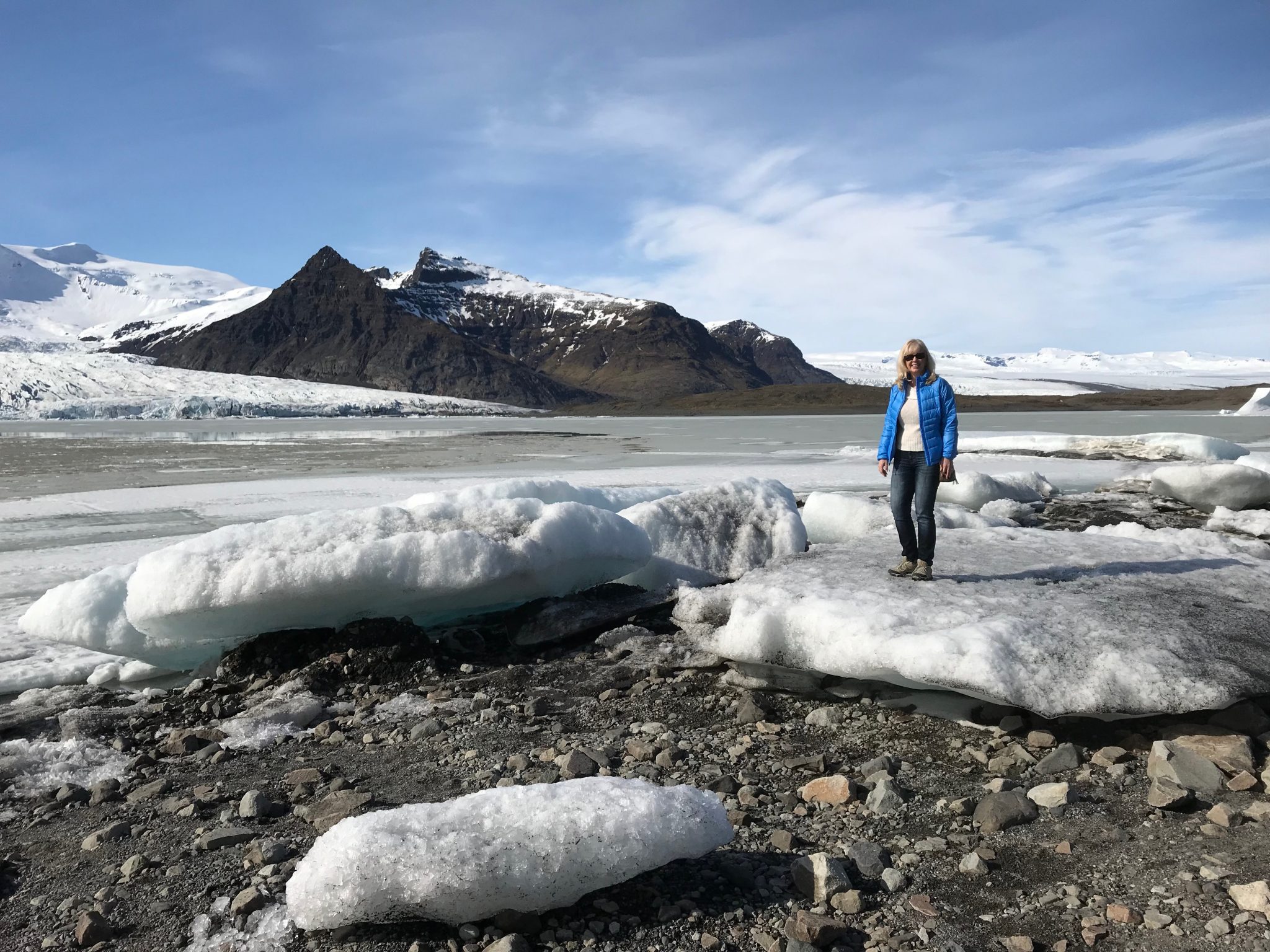 There is a map that shows what would be a great hike from the Lagoon over to the bridge. It looks to be a five hour hike…but you’d need two cars (one at each car park). Maybe next time for us, but the map is below in case any reader is interested. 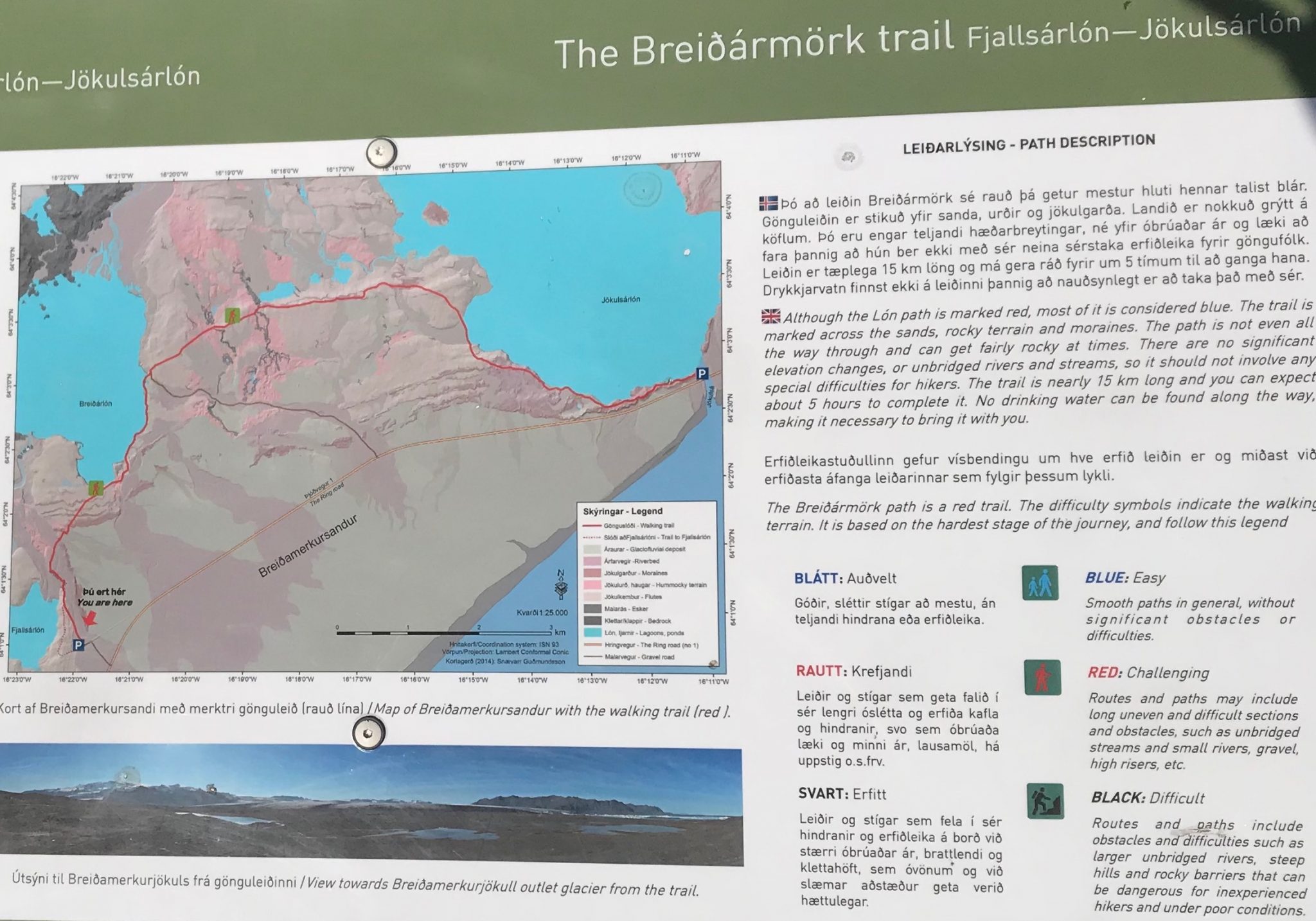 As we were getting close to the turn off for our guest house for the evening, we saw a mound in the middle of a flat plain with lots of boulders stacked upon it.

The best explanation for this place comes from the sign there:

According to tradition, there was a large farm known as Laufskálar on about this site, but it was destroyed in the year 894 in the first recorded eruption of the volcano Katla. The neighboring farm was Dynskógar, home of the settler Hrafn hafnarlykill, and the region was known as Dynskógahverfi. Sources state that there were 24 doors on the iron hinges at Laufskálar. The lava mound, which is know as Laufskálavarða (“Laufskálar Cairn”), was named after the farm. Everyone passing by it for the first time was supposed to add a stone to bring him good luck on his journey. The Public Road Administration has moved a supply of stones to the site to enable modern travelers across Mydralssandur to continue this tradition. 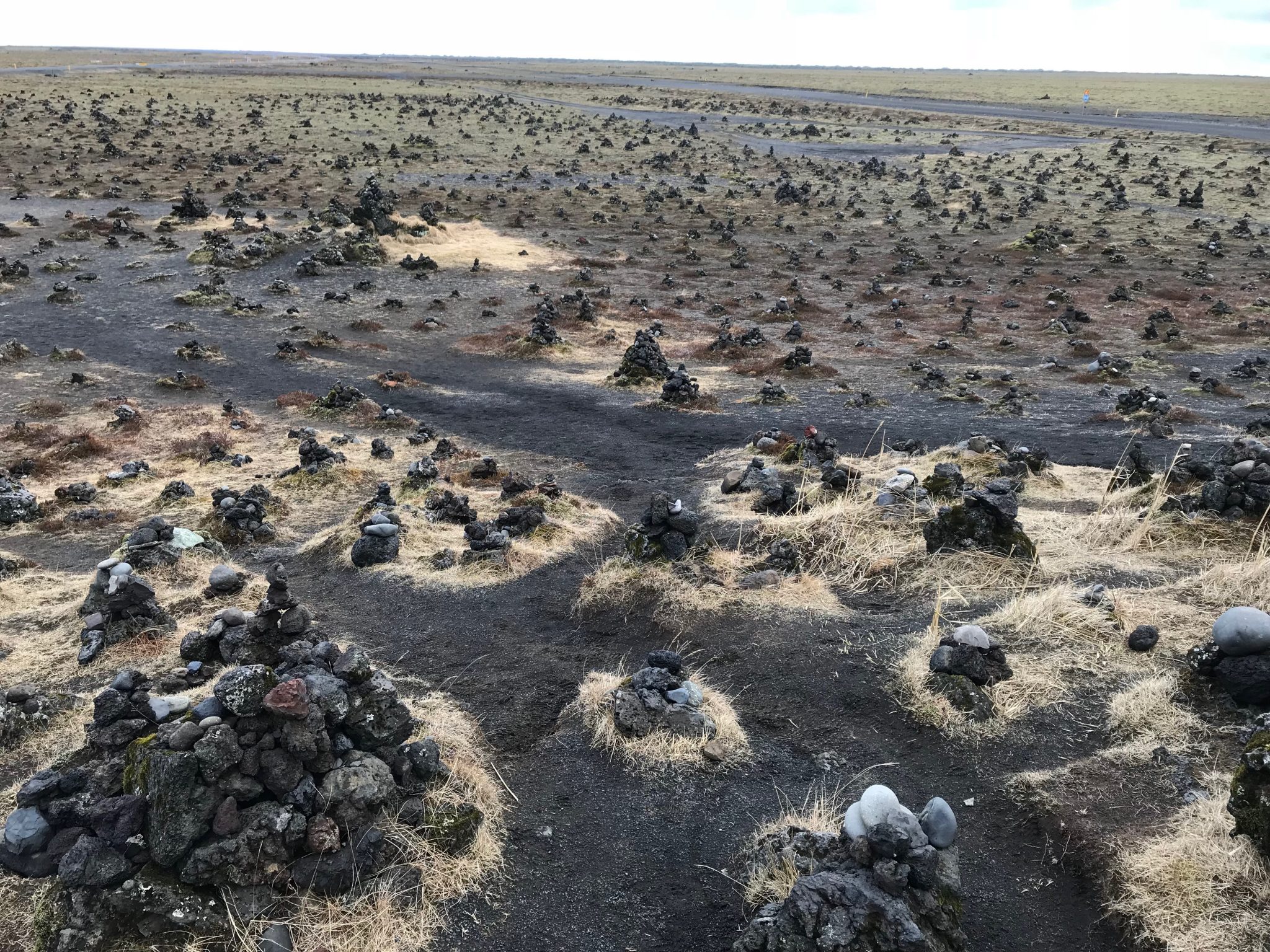 That evening we stayed at a guesthouse that I wished we had been able to make it to the evening before. We turned right of the ring road right after the stacked stone park, and a mile or two we came to Hrifunes Guesthouse. We were tired when we checked in, and the lady we spoke with said they had room for two at dinner…which was good since there was nothing else within miles. The room had a nice window seat that we relaxed on before heading for a nice family style meal with soup, a lamb casserole, freshly baked bread and other sides.

And, as you can tell from the photos above, once more even though the sky had cleared for us, it became overcast again before sundown. The Northern Lights remained elusive.

Our destinations for the next day were Vik, Vestmannaeyjar (Westman Islands) and the Eldfell volcano museum on the island.