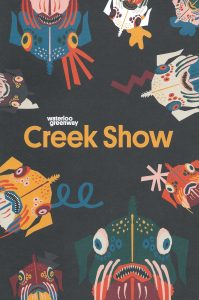 The 2019 Waterloo Greenway Creek Show was held November 7-17, 2019 along Waller Creek between 9th and 12th Streets in Austin Texas. This was the sixth annual Creek Show. There were six light installations on the path – most of them were more than light installations, combining sound and movement with the lights. This event (which is free) surpassed our expectations. We’ll be sure to go again next year.

We visited November 9th, and though the line on 9th Street to get in (there appeared to be one way in and one way out) was long enough to wrap around, it moved quickly. Below are photos and videos of each of the light installations and the monster house (!) at the exit. Our favorites with Ghost Boat, AURORA and m e a n d e r.

This installation was just inside the entry gate. The sign near the installation said this was by Norma + Sunny, Sunny Schneberger and Norma Yancey, AIA. “The only way forward is through the walls” is a quote from the sign describing the art work. Click on the photos in the gallery below to see larger versions.

Side of Light House

The creek all through the path was lit up as well – except near the art works. 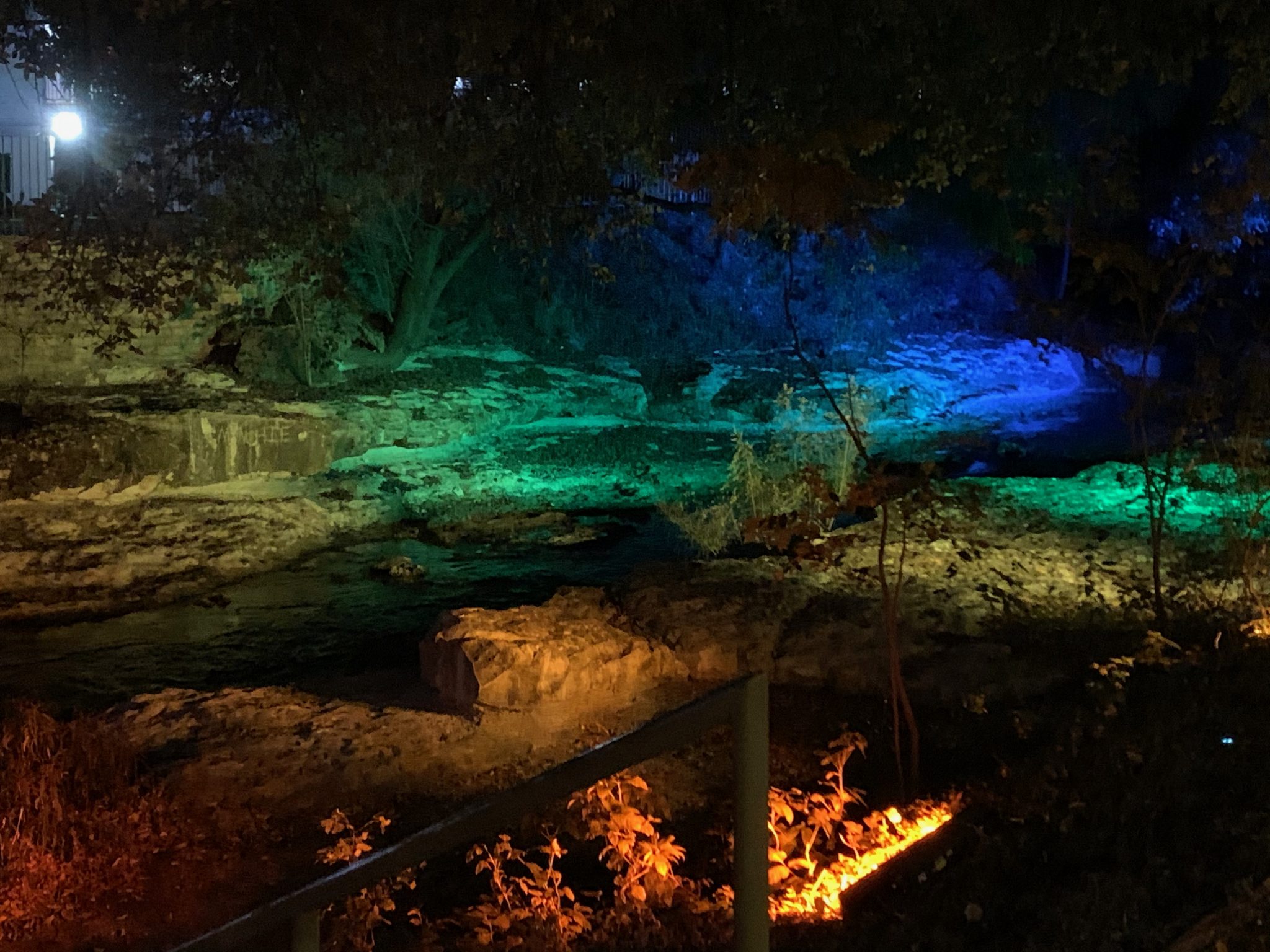 The next art installation was under the bridge at 10th Street. Downstream Upcycle was by Design Workshop and, according to the sign, “used more than 17,000 hotel shampoo bottles and repurposes them into a colorful wave of glowing lanterns.” 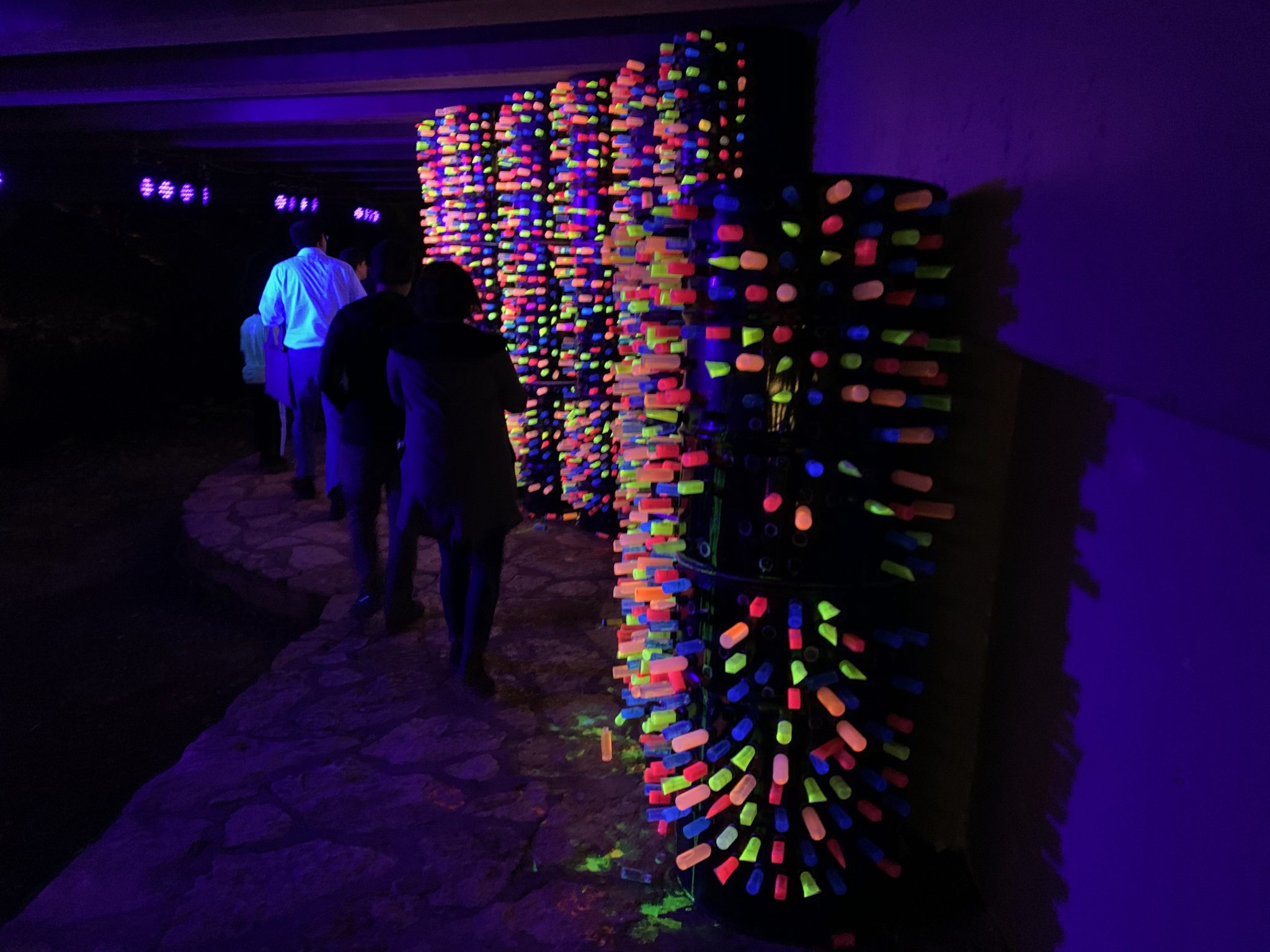 Even though we were there on one of the early days of the 2019 Waterloo Greenway Creek Show, several of the shampoo bottles have come off of the exhibit. But, when you start with 17,000, you’ll have a lot left. These were much more colorful than the hotel shampoo bottles I’ve had to use! 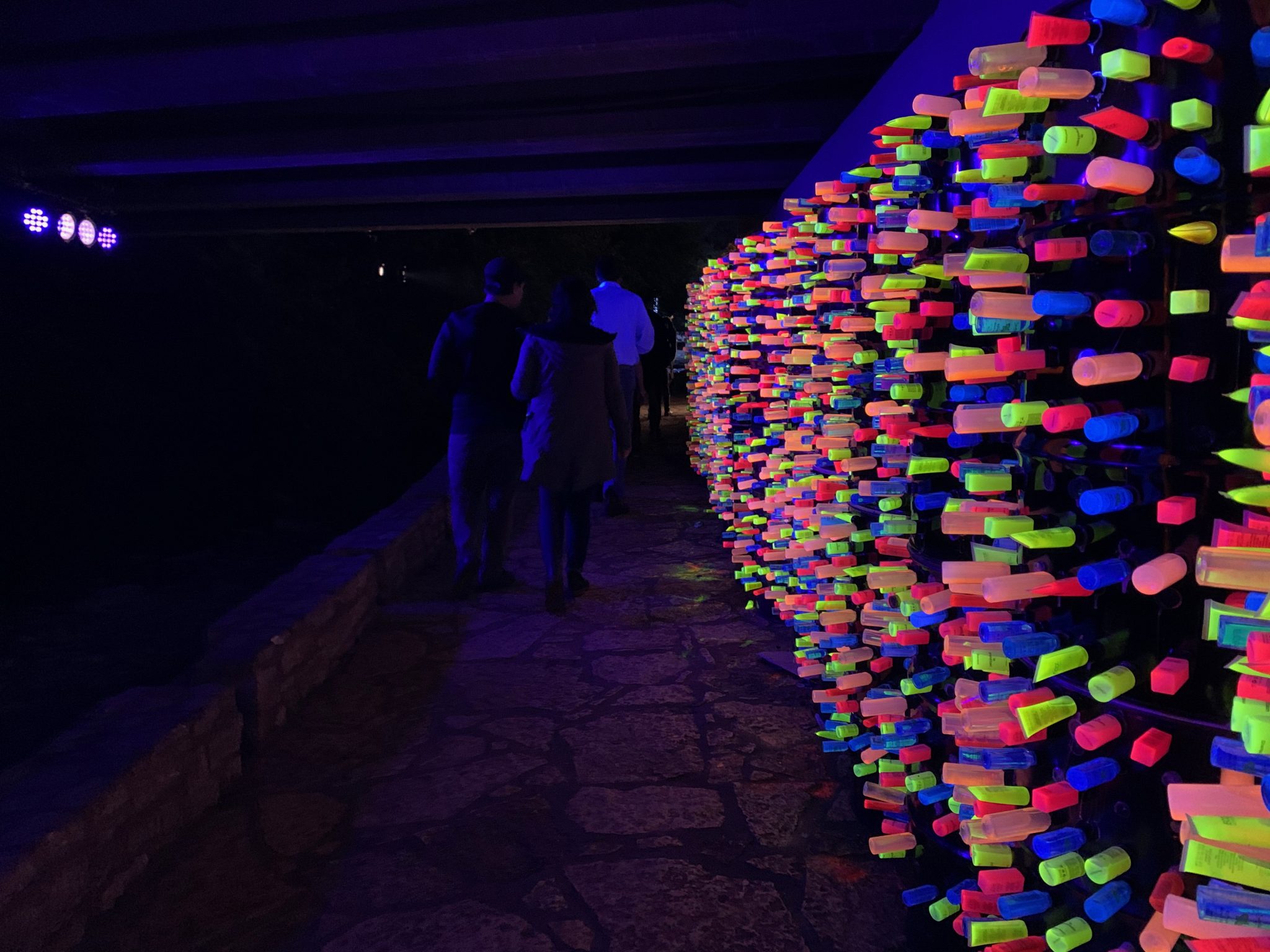 We could see the next installation, AURORA, as we walked under the 10th Street bridge. AURORA was by 1909B (made up of ten people). My favorite quote from the description: “Like Waller Creek itself, AURORA lies somewhere between order and chaos, infrastructure and nature, intention and accident.” 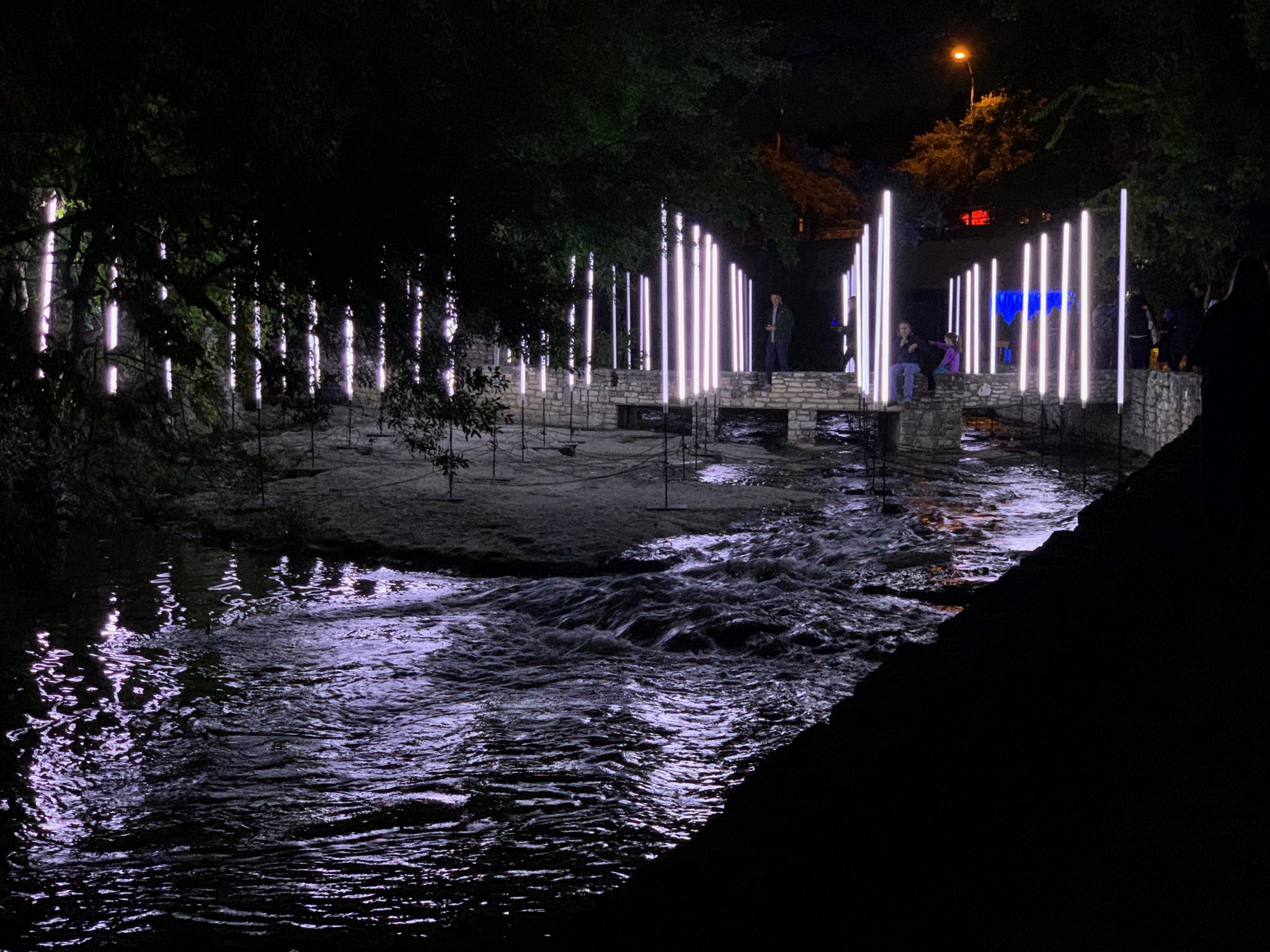 On the walls on the walkway were colored globes. I’m not sure if they are always there (I’ll have to go back and check) but each of them has a small image inside. As usual, click on the images to see larger versions. 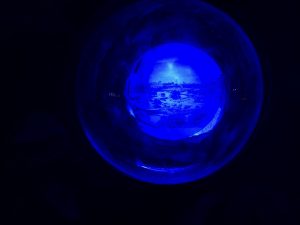 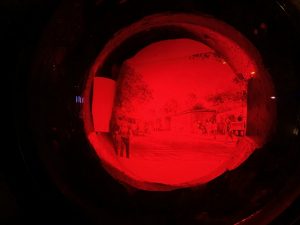 As I’m certain all of the installations did, AURORA required a lot of wires and I’m sure a lot of setup. In the photo below that is closer, some of that wiring can be seen. 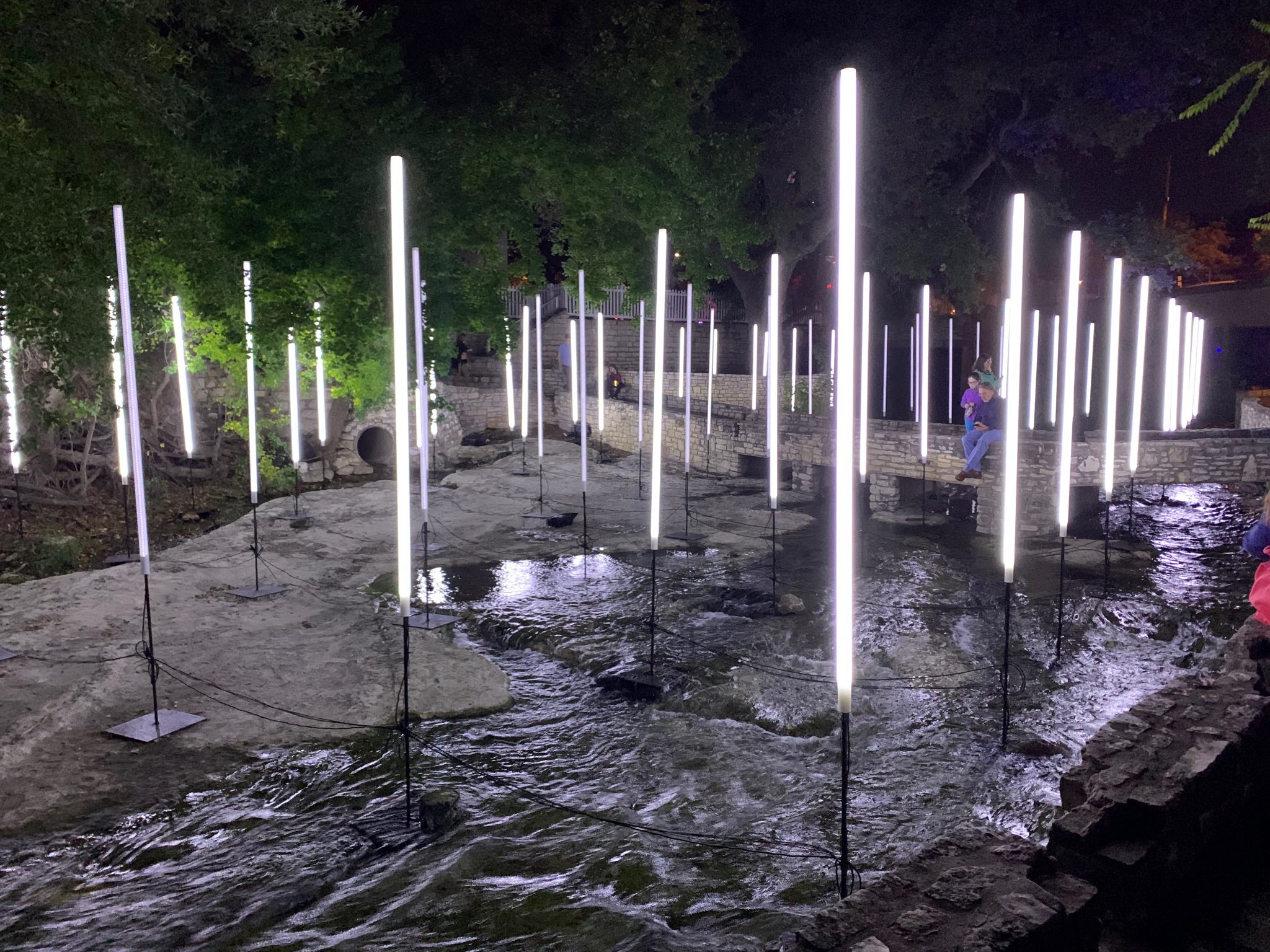 The art installation named “m e a n d e r” was built by frankev (Frances Peterson and Kevin Sullivan). From the description on the sign “Like water in underground caves, flows of visitors have symbolically eroded and carved a whimsical passage.” 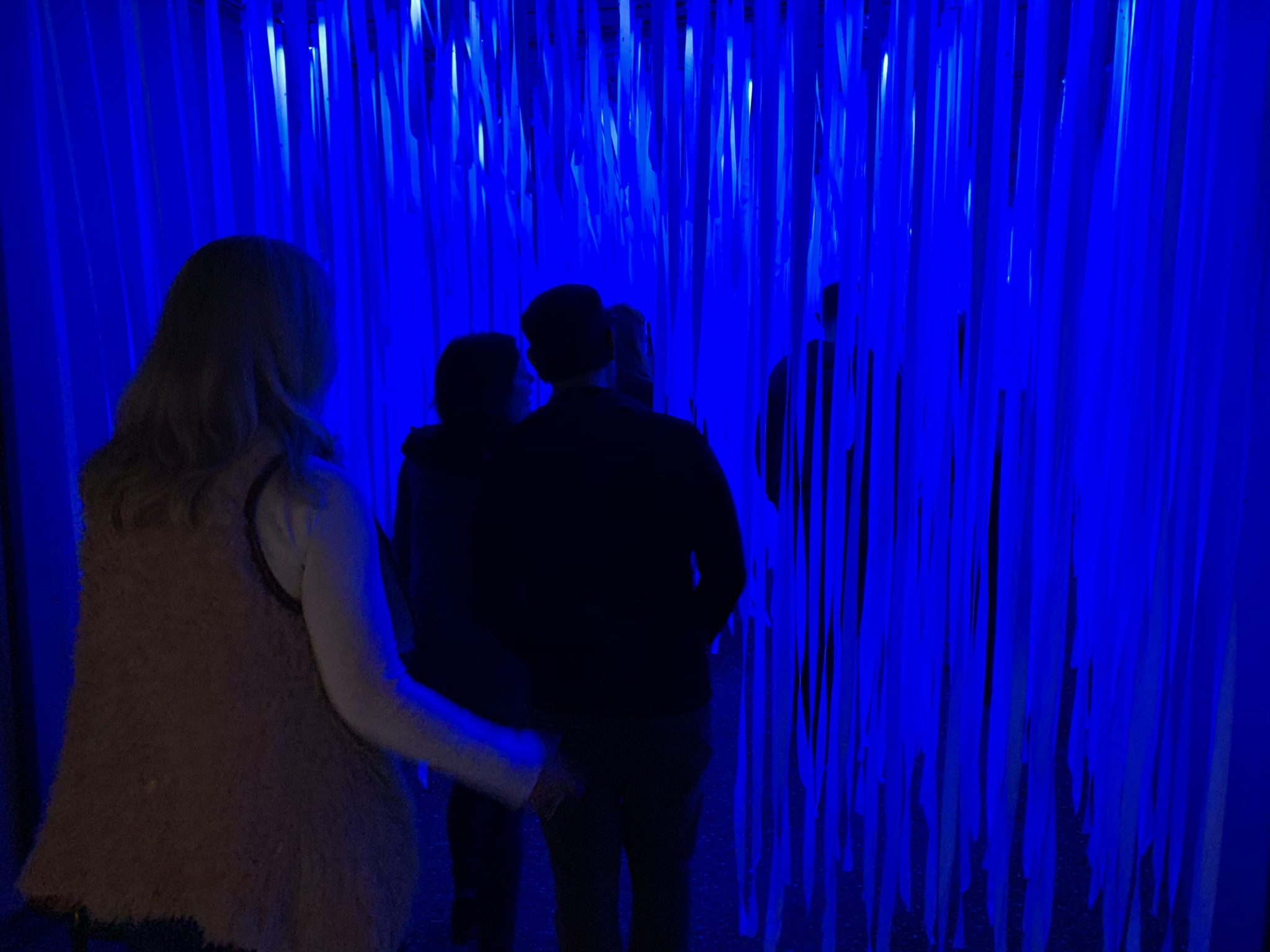 Below is a video of my lovely wife meandering through.

This installation was a lot of fun. The streamers were soft like cloth, and you didn’t have to go to far in before it looked like you were alone. 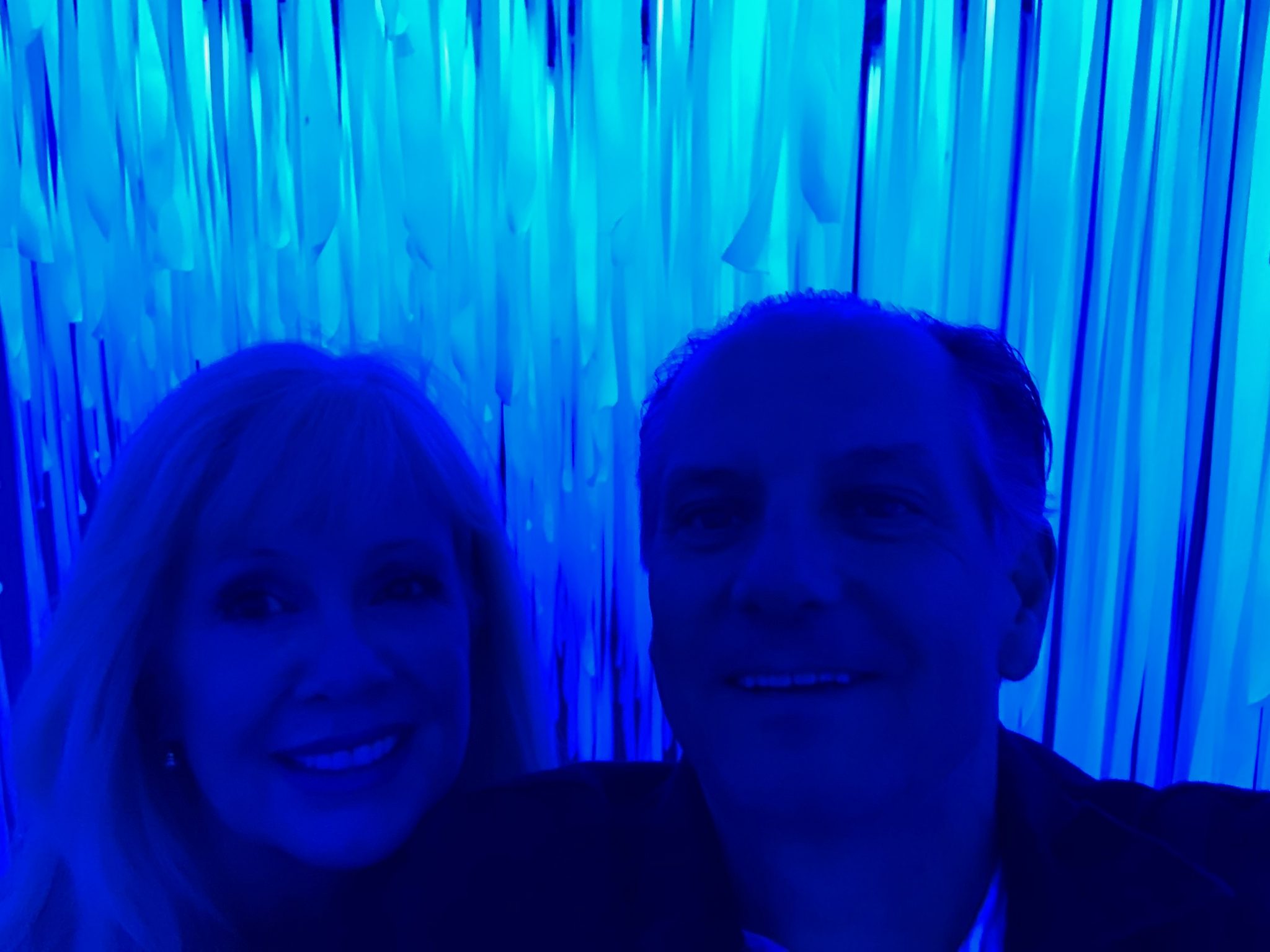 The installation called “String Theory” is under the 11th Street bridge. String Theory is by Boka Powell (James Cornetet and Miren Urena). The strings continuously twist. 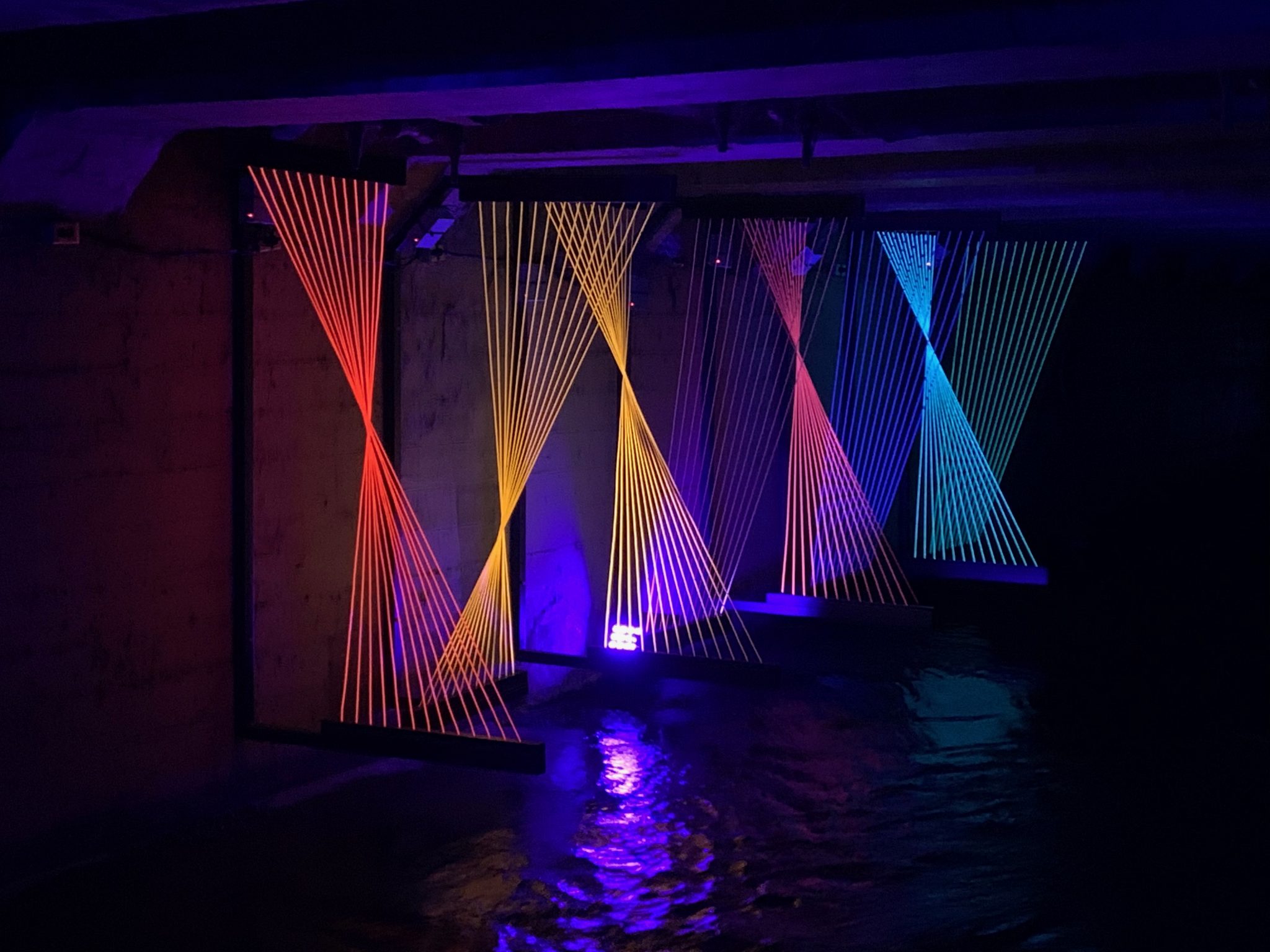 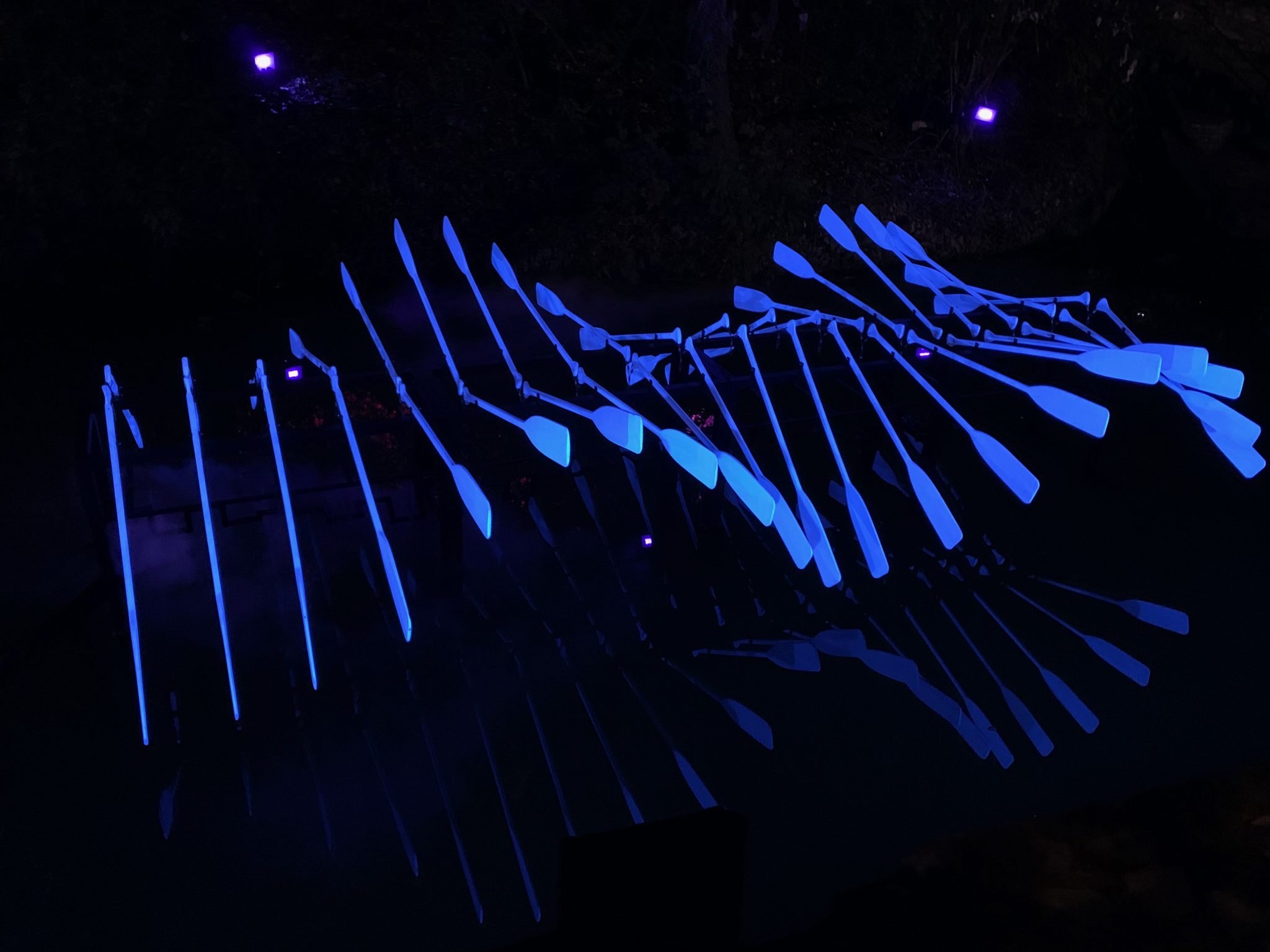 This installation used motion, sight and sound. Still images don’t do it justice, so here is a video from the front.

And,also, a video from the back.

Ghost Boat was quite hypnotic.

As we climbed the stairs to exit the walk along Waller Creek, we came upon the Creek Monster Habitat. It was put together by the University of Texas. 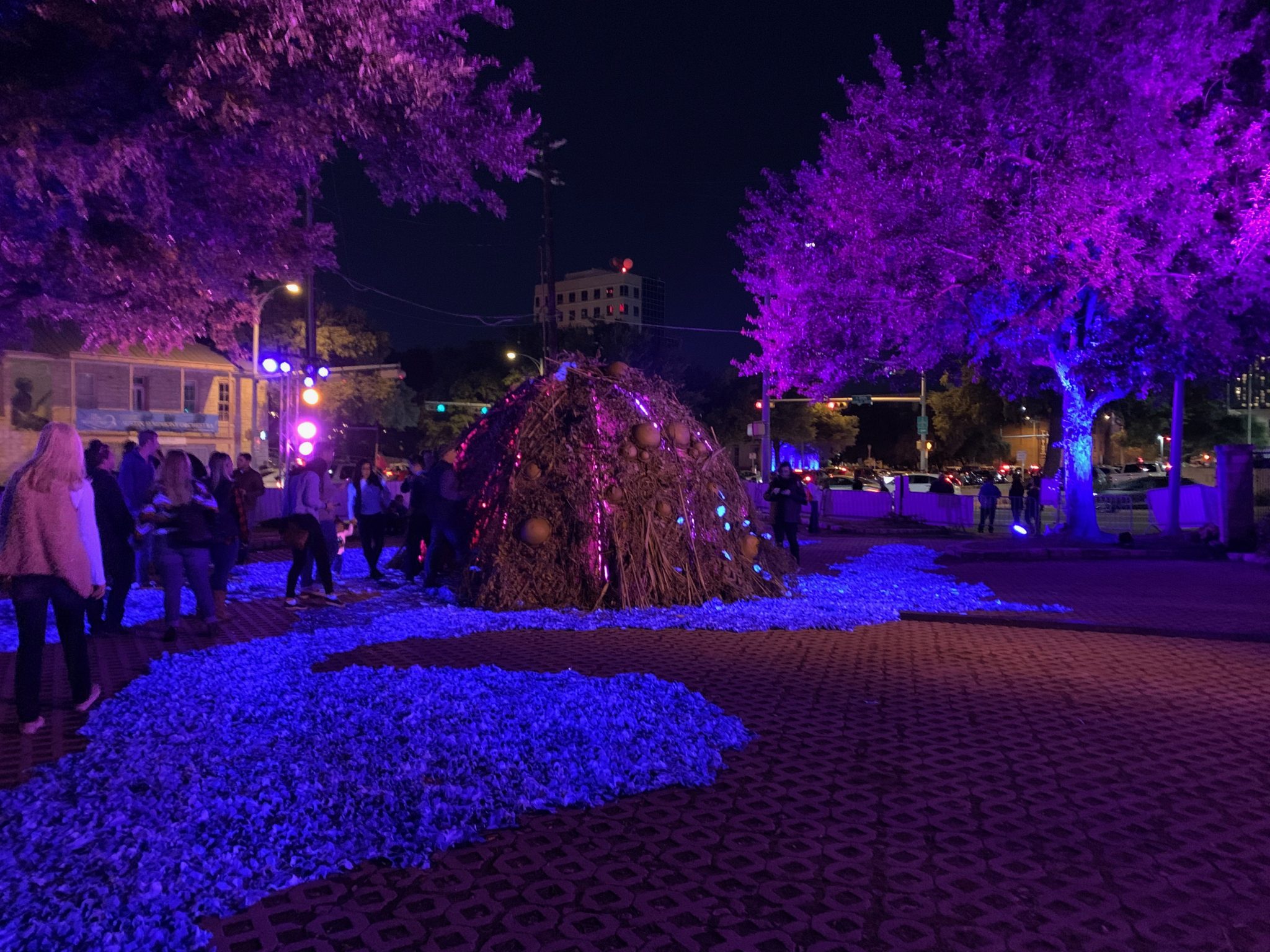 There were ultraviolet leaves that made up the edges of the paths. And there were eyes (we assumed they were creek monster eyes) on the outside and the inside. 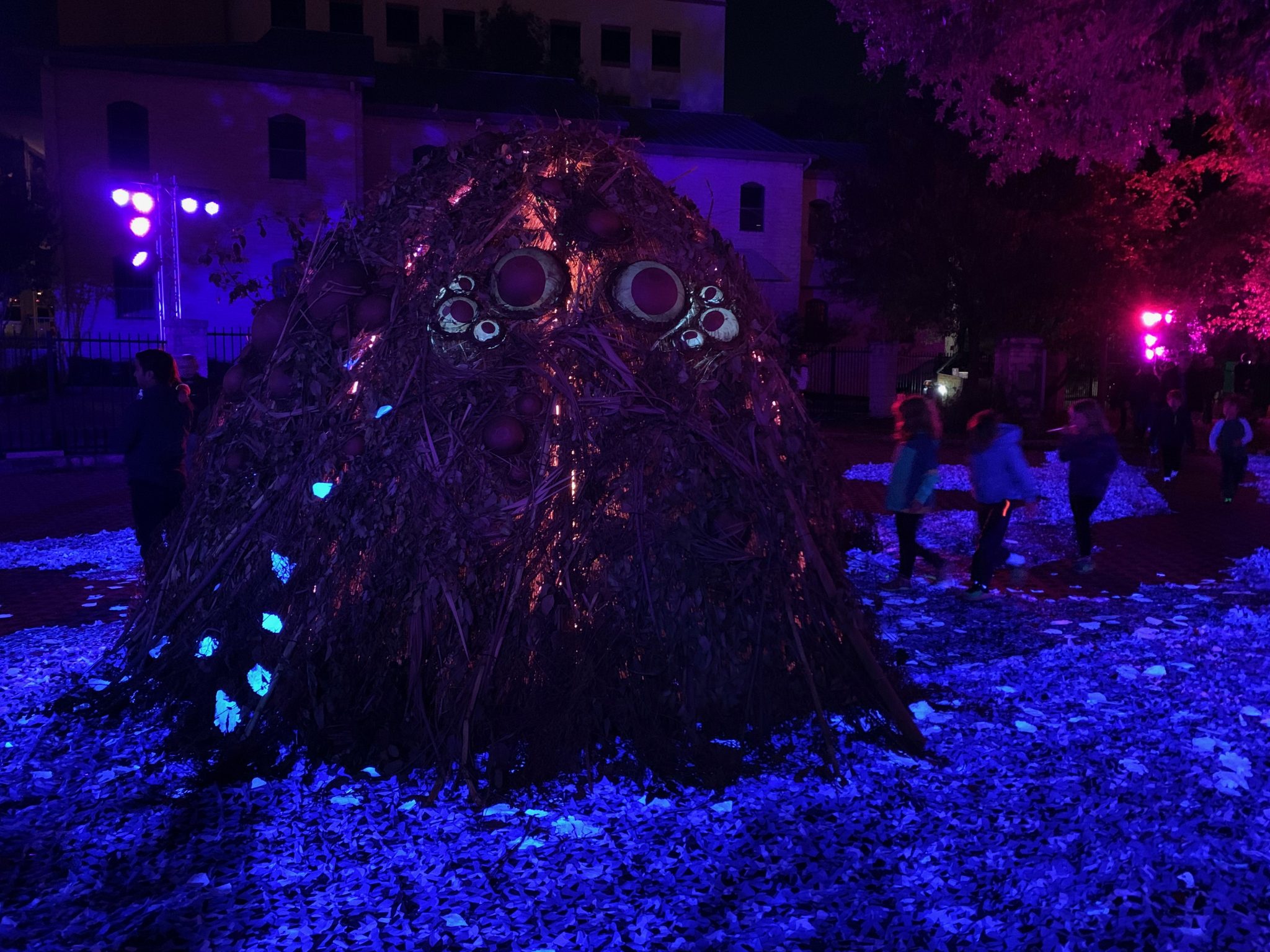 The eyeballs on the inside only came on every so often, possibly because of movement. 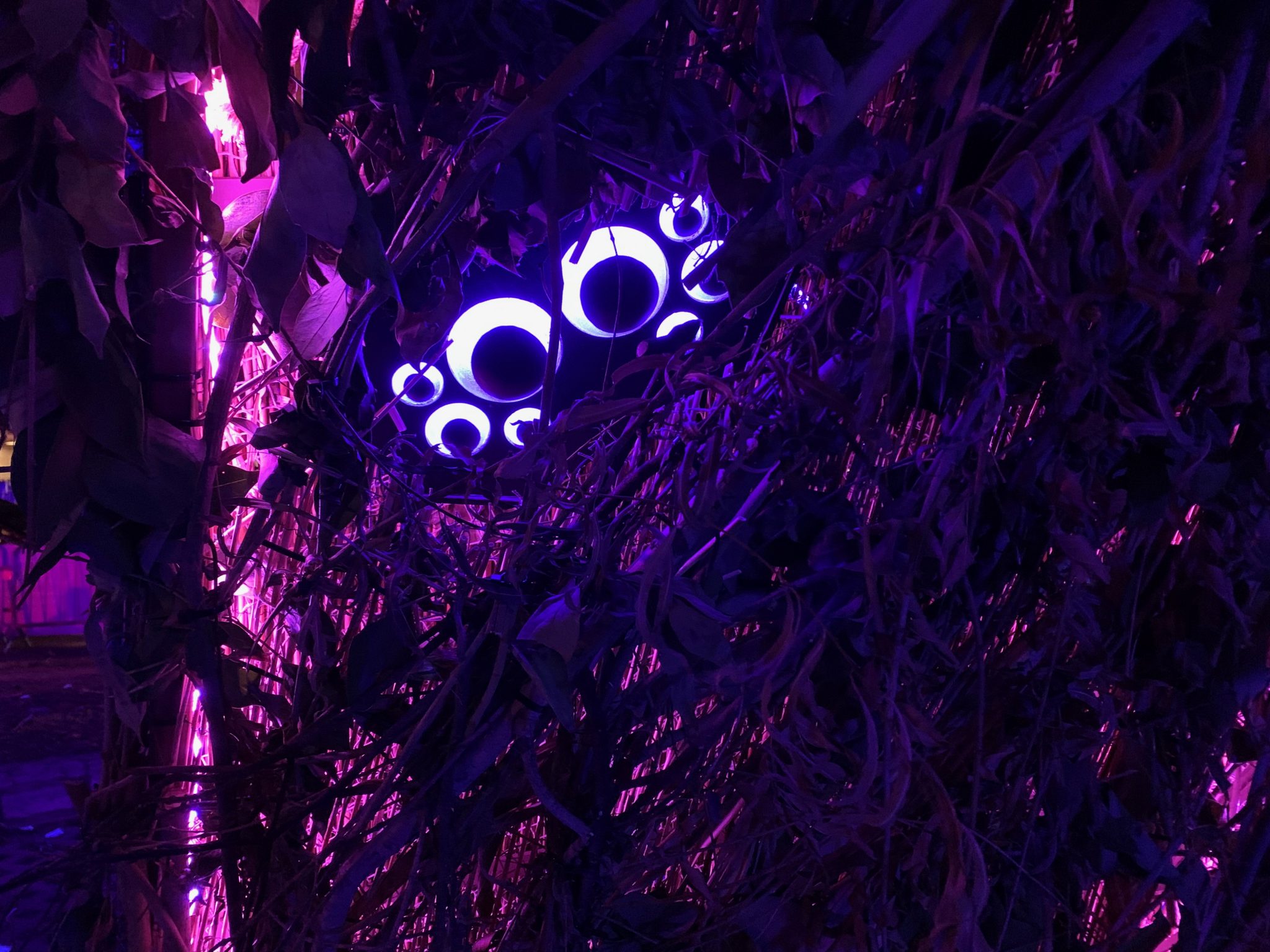 We weren’t quite sure what to expect at the Waterloo Greenway Creek Show, but it certainly exceeded our expectations. We’ll make a point to visit again next year. 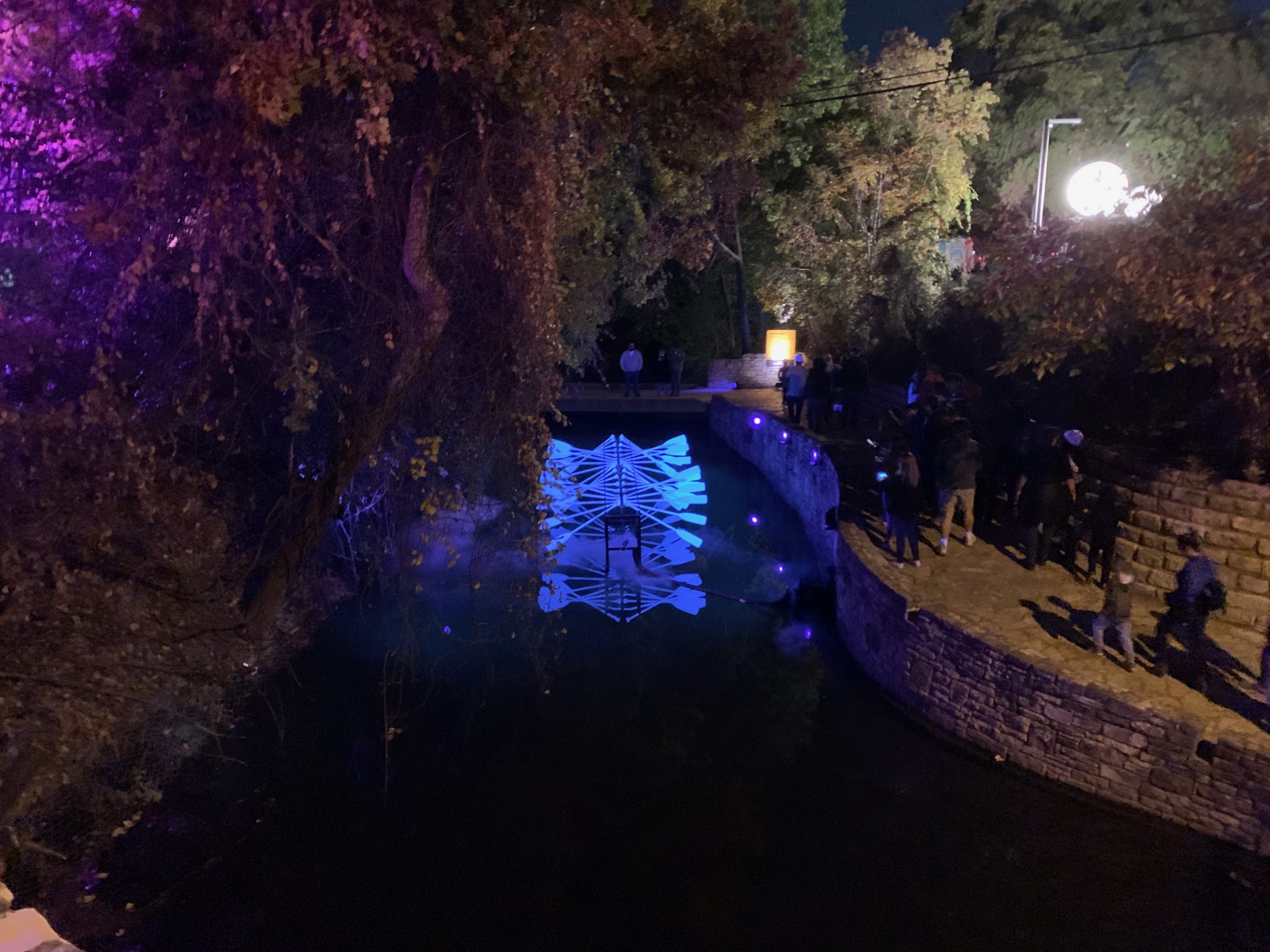