This is the 12th story in Street and Smith’s original publishing order.

Though this story was written in 1934, it is the first in the series chronologically that mentions what will become World War II.

This story is also significant as Doc, a world class surgeon (among everything else) fixes Johnny’s eye 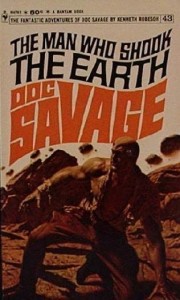 , which was injured during the teams time (and initial meeting) during World War I.

Opposing groups seeking Doc come to NYC, all of them frightened by the sounds of the subway. They believe they are earthquakes, which is what brought them to find Doc in the first place. As usual, one group seeks Doc’s aide, one seeks to stop his involvement.

One of those seeking Doc is named John Acre…or is it really him? In an interesting change of writing perspective, the perspective of the real John Acre, who is in Chile is shown for several chapters in a row. Someone, known only as the First Little White Brother, has harnessed the ability to create and target Earthquakes, and is trying to take over the nitrate business in Chile.

Does Little White Brother = Aryan race? During a rant, the First Little White Brother compares himself to Hitler and Mussolini, seeing himself as dictator of Chile after he takes over the nitrate industry. WWII and the Doc series of WWII stories doesn’t start for a while, but this is the first indication of world events entering the plot.