This is the 16th story in Street and Smith’s original publishing order and the first one not written entirely by Lester Dent (Harold A. Davis is co-author). 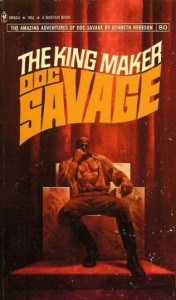 This finishes a sprint of sorts, reading 5 Docs in the last 30 days, so that I can get to the Radio Archives version of the Adventures of Doc Savage (which feature the 17th and 19th books in the series) and review it for SF Signal.

In this story, Doc finally gets to become King. Two warring factions, the current rulers of Calbia (led by the King Dal Le Galbin, his, of course, beautiful daughter the Princess Gusta LeGalbin, and the head of their armies, Captain Flancul) vs. the rebels, led by Conte Conzonac, who fancies himself the King Maker, try to convince Doc to be on their side. The “King Maker” offers Doc the throne if he helps overthrow the current tyrants. A weapon (the current of a scud missile with eyes, pretty scary for 1934) that appears to be in the hands of the royalty pushes Doc’s decision to head to Calbia, to attempt to stop the bloodshed and see who is really behind the development of this weapon.

The trip to Calbia is full of intrigue. First, Long Tom decides not to make the journey to work on a project, an unheard of even (he later shows up, having been secretly instructed by Doc to fly ahead of the team). The team is discovered on a Calbian boat, named as traitors to the crown, and set off in a launch. One of the heat-seeking scud-like missiles finds them, but, of course, they were already out of the launch, waiting to be picked up by Long Tom.

The part of the story in Calbia is marked by Doc and his gang remembering war; part of their origin story is that they all met during WWI. Doc also uses the unique strategy (unique at least so far in these stories) of telling the five men different tasks, but not sharing those tasks in case they are captured while at war. This departure made me wonder if this was Harold Davis voice; they are other differences (Doc at one point tells the Princess she is a “brick”, a large departure from his past personality).

A precursor for the WWII involved stories to come, this was also enjoyable by the science that was explained as the basis for the heat seeking and guide missiles, quite science fiction at the time.