Since this post in May of this year, I’ve been experimenting with publishing on the blockchain with a plug-in from a blockchain company called po.et. The concept of po.et is quite simple: utilize a public ledger as a proof point that some writer (i.e., me) did indeed write some words (in this case, blog posts, but could be any written work) at a particular time. So cryptographically (mathematically) it can be proven that a set of words (and hopefully in the future, images/photos) was created and published at a particular time. [poet-badge]

If the reader clicks on the po.et badge above (or on any other places where it is used) they are shown a “friendly” version of a blockscan. The portion not showing in the screenshot below (in the tab labeled “Content”) is a replica of the published work; the blockscan is in the technical tab.

For writers, musicians and others that produce original digital content, this simple implementation of blockchain technologies is a pretty big deal.

The company I run, Media Sourcery, has a patent filed in 2006 in an area called “non-repudiation”. In our products, it is important to ensure that the data sent from sender A to sender B is not tampered with, and that it can be proven that the sender sent the data and the receiver received the data. This is similar to the proof that po.et and other blockchain companies are providing (or at least say they will in their white papers) except ours was point-to-point; with the public ledger concept of blockchains, the “proof” is public…or it will be when it moved from “testnet” (beta) to “mainnet” (production).

Po.et’s initial implementation is as a WordPress plug-in which makes it easy to use and implement. Anyone can generate an API Key, download the plug-in to their WordPress site, and start using their system.

To see what is being put onto their blockchain, you can use their frost API and the RESTful web services that come with it. The curl command below assumes you’ve set your api token as FROST_TOKEN and the frost URL as FROST_URL (good documentation here):

…and returns an array that has JSON entries with this information:

…and then lists the content. My initial assumption was that they were going to simply put a hash of the content onto the public ledger – a hash that could be recreated to provide “proof of publication.” But for now the implementation puts everything on the blockchain.

When we were working on our patent we had the concept of levels of trust. Sometimes this is also called reputation.

There are many levels of trust that we use today without measurement, through email or text or other non-blockchain communications:

With blockchain, the transactions are designed to remove the need for trust. With public key/private key exchanges, neither party needs to know the other – they just need each other’s public keys.

This anonymous trust works if you are exchanging tokens. But if you are using public ledgers for “proof of publication”, the type of trust a user might look for is different. It is more about reputation. And the need to check reputation stems from two areas: determining a trusted source, and determining a proof of non-plagurism.

Like coin as an attempt to address part of this on the blockchain with a “proof of creativity” concept that features a LIKE button and a LikeRank algorithm.  The LikeRank algorithm treats reputation as a higher ranking if more derivative works are built on the original content, i.e., the more content creators that re-use the original creation, the higher the “LikeRank” (white paper here). This is a creative employment of blockchain (each derivative content points back to the content it re-utilized), but it only solves the question of originality if all content uses LikeRank and Like coin.

Like Coin now has a plugin for WordPress. As of this writing it is just released. As you can see in the screenshot below (from my normal Safari browser), it requires that you utilize a browser that has the MetaMask plug-in. Unlike the po.et WordPress plug-in, which is currently configured once with an API key, the LikeCoin widget for WordPress is linked for each post in the editor. 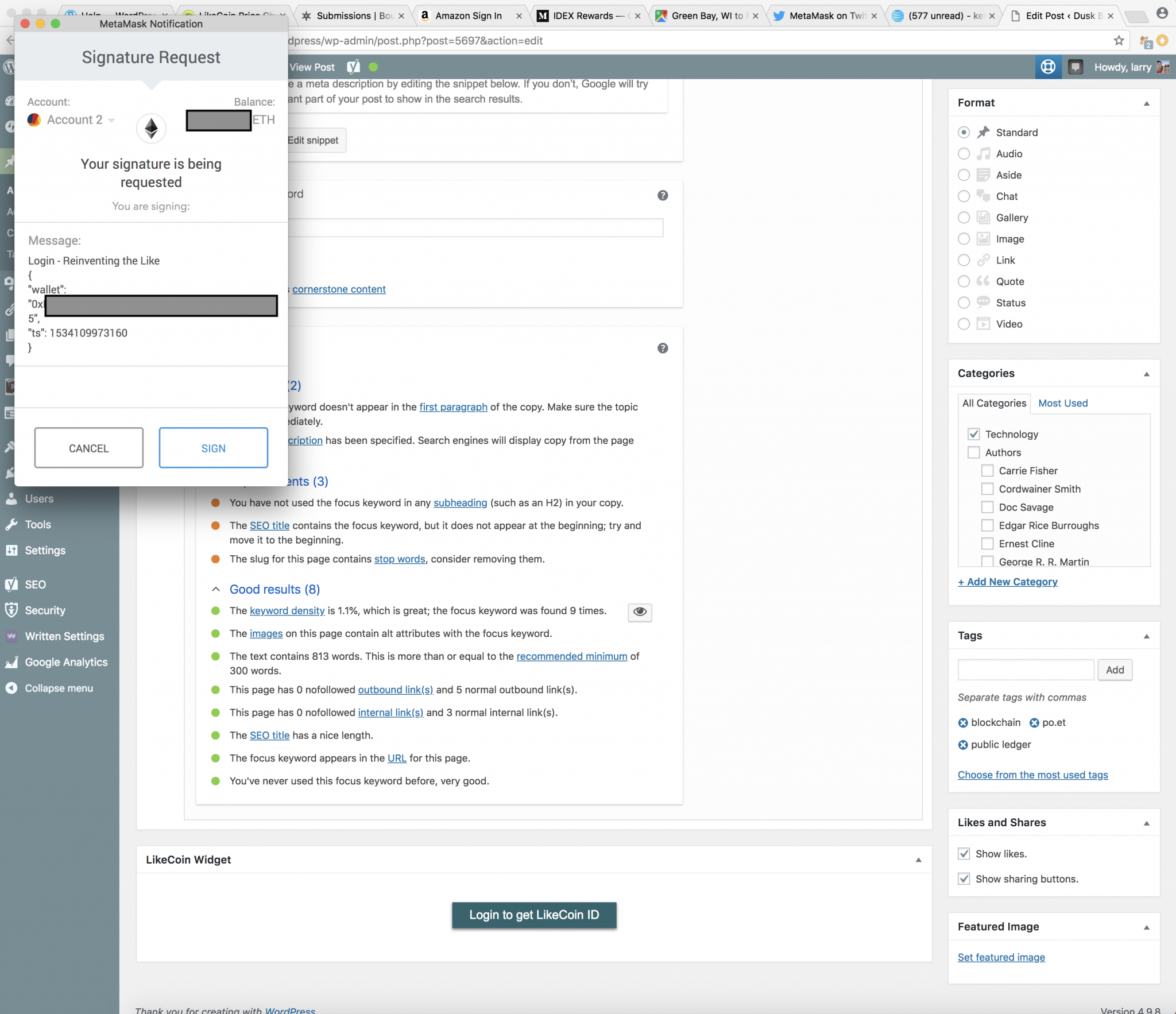 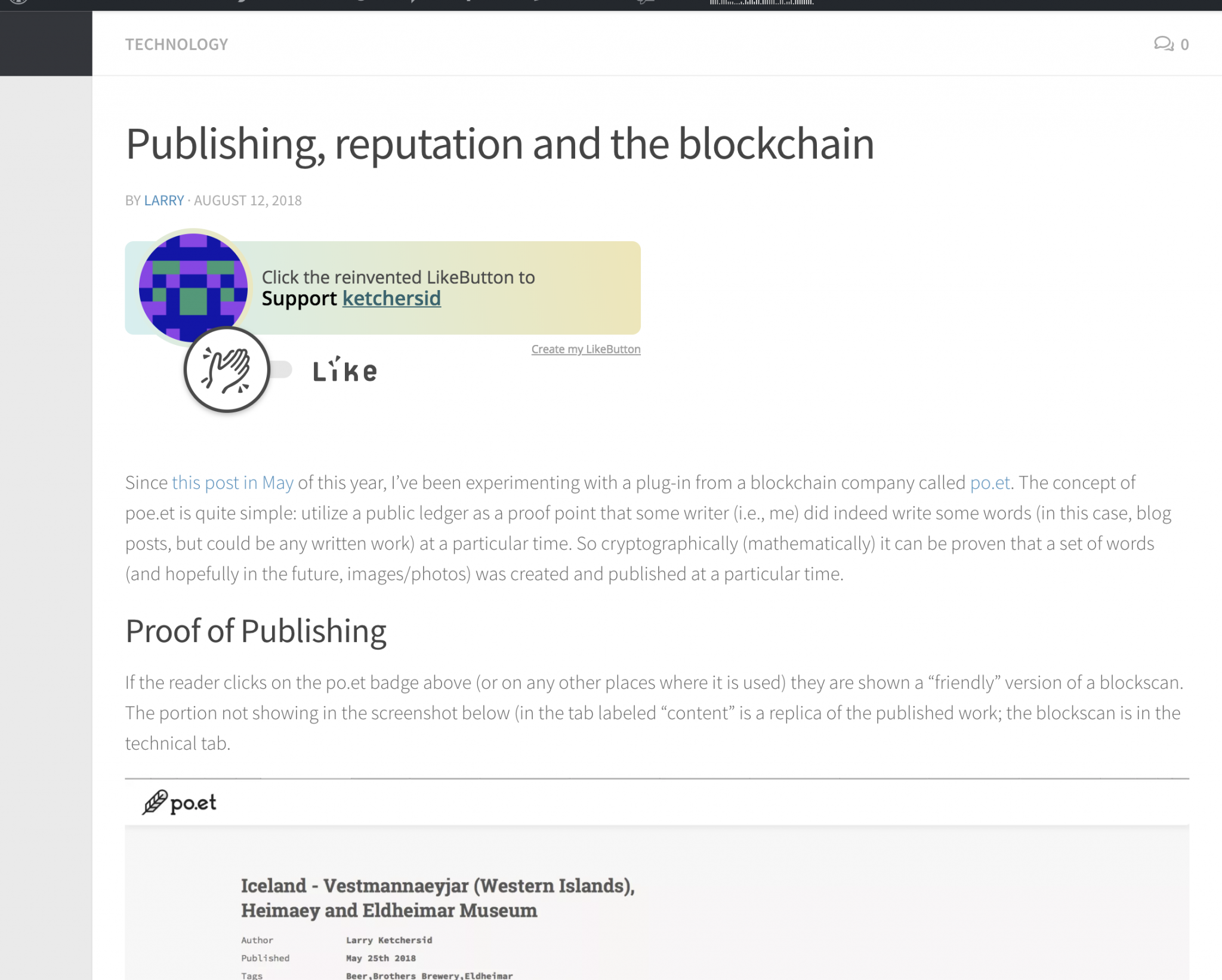 For this post, I chose the less obnoxious bottom positioning (you can put the button on top or on the bottom or both with the current version). I do “like” the positive affirmation “support ketchersid”. (!!!!!)

What happens when you click on the LIKE button? I’m not sure. I clicked on it in the preview post in a browser that had no MetaMask (i.e., Safari) so it couldn’t have known if I was a registered Like user or not… and the plug-in upped its count by one. If you highlight the info icon, it does suggest logging into a LiteCoin ID. LikeCoin is currently running a mining beta (link) so this may just be beta experimentation.

Still Work to be Done

I applaud both po.et and Like for building WordPress plug-ins and other instruments they are employing to bridge the gap from the non-blockchain world to the blockchain world.

As an author/writer, after all this, what has been accomplished?

Trusted source (reputation) is a large problem still to be solved. It certainly isn’t the number of social media followers (I’ve gotten 1,000 words into this post without mentioning “fake news” or “celebrity opinions”…and won’t go down those rabbit holes here), the number of posts (bots are very good at publishing) or the number of connections. It could be a derivative of  the number of posts with a specific tag – this simple denotes an interest in the subject, not expertise – combined with the “likes” or “claps” or “upvotes” from users/people/bots that have a good “reputation.” And therein lies our catch-22.

LinkedIn attempted to build a reputation-based system with numbers of connections; the failure there was that anyone could connect with anyone regardless of if they actually knew the person or had enough knowledge to vouch for their reputation. There is a blockchain-based company called dock.io that allows you to import your LinkedIn list into their solution, but there is almost a cleansing step needed to get that data in LinkedIn cleaned up before re-utilizing it. Dock.io’s tact appears to be trying to implement a type of single sign-on to control your online data – an admirable aim, but not a reflection of reputation.

In summary, there are many innovated implementations of blockchain technology for content creators. There are several I have not had the cycles to investigate, particularly in the music industry. The current centralized processes for publishing creative content, with the multiple layers each taking a royalty, is certainly ripe for a decentralized blockchain public ledger approach. A reputation or “level of trust” system would improve these publishing paradigms. Establishing a reputation ranking system that is difficult to “game” is itself difficult, as has been proven by the multiple social media attempts.

This article was also posted on Medium to test the Like widget there.