Quick summary: if you are using the Mist Ethereum Wallet (version 0.9.2, but appears to occur still in 0.9.3 which is the latest as of this post) and you send ether (ETH, the cryptocurrency of the Ethereum blockchain) without enough gas, transactions make get stuck. For those interested, sending an amount of ether (or doing pretty much anything on the Ethereum blockchain) requires fees, similar to any other processing fees…except these have cool names like “gas.” There is a “gas price” (called GWEI) and a “gas limit” (commonly called “gas”). GWEI is just a measurement of how much ether (ETH) – G is giga (like in gigawatt) and WEI is a very small fraction of one ETH (one ether). It takes 1 to the 18th power (1 quintillion) WEI to make an ETH. So a GigaWEI (GWEI) is 1 to the 9th power WEI, so it is still a small fraction of an ETH. Longer and better explanation here.

There are many rationales for the transaction fees (paying miners to do crypto-calculations, cause it costs them electricity), but they do make sense – you want work done, whether that is moving ETH around or working a smart contract, then there is a small fee.

I wish I would have known this before I tried to send my first ETH. My first attempt got stuck, because I didn’t know what gas and GWEI were, and like any cheap skate I went low and my transaction hung.

Details on fix I used:

I went to the Developer UI (Develop->Toggle developer tools-Wallet UI and at the prompt at the bottom executed this command:
Transactions.find().fetch() 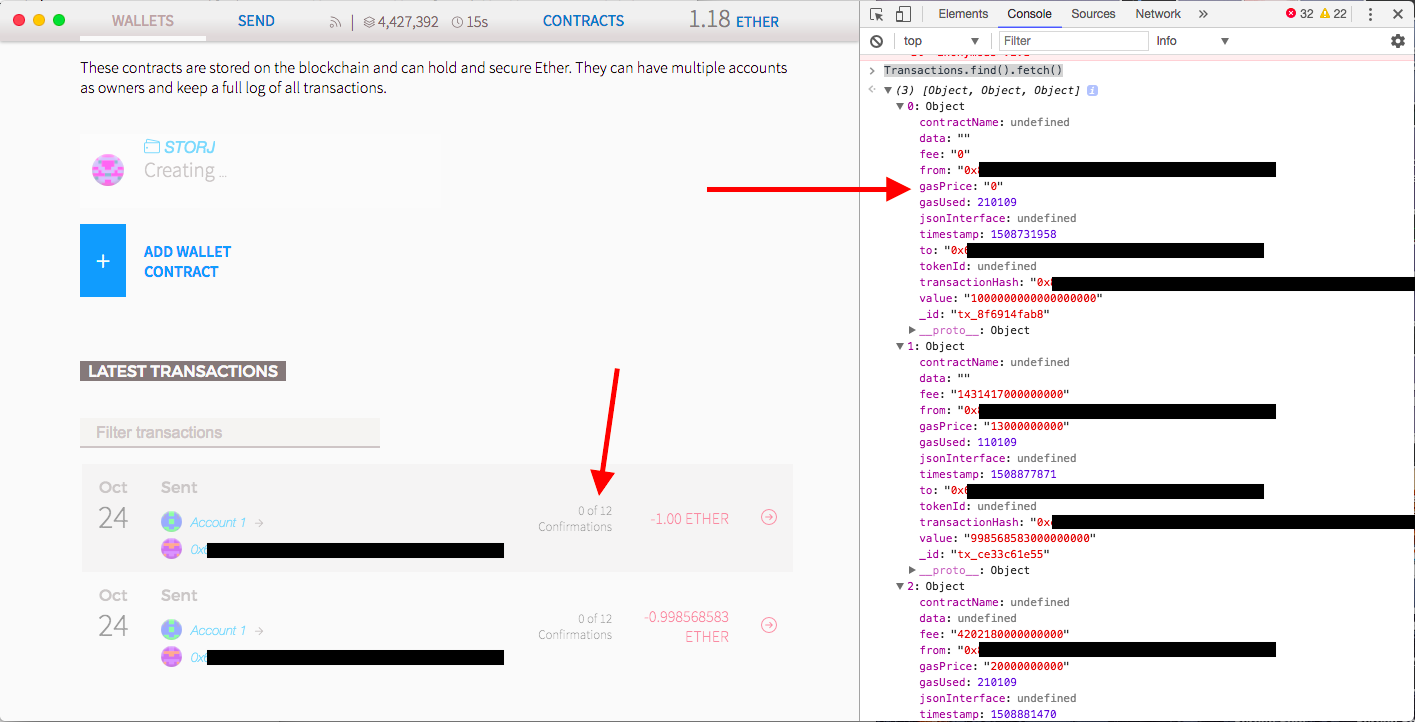 This brings back an array of the pending transactions (in my case, there were three). Clicking on the triangle to expand the array, I went to each in turn (starting with the oldest one) and in the object list of fields (JSON I believe) I found the “_id” field. Then to delete the transactions, for each one I executed:

As soon as I did this, the transactions were removed from the list of Latest Transactions.

So – semi-fixed. The transaction went through, ETH decremented correctly (and displayed) on the wallet, but the transaction still says 0 of 12 confirmations.