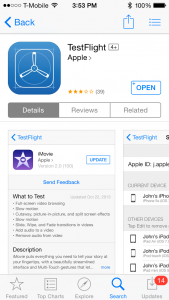 The website we have utilized for beta testing of apps, TestFlightApp.com, shuts down on February 26th, 2015. All app testing will be moved to the iOS8 TestFlight app and managed through Apple’s iTunes Connect.

As a developer, and a user there are many more PROs to this than CONs. The new TestFlight app for iOS8 radically simplifies the process of beta testing apps.

In the old TestFlight.com, a developer had to:

There were several places where that process could get stuck and could indeed go wrong.

With the new TestFlight iOS8 app, the steps are much simpler:

The device ID mapping is done by Apple. No changes in the provisioning profile are needed.

What else is different? Here are the cons:

Overall, the PROs far outweigh the CONs, and hopefully some of the other pieces will show up in the future.

Existing users can be exported from TestFlightApp.com into CSV files for import as external users on Apple’s iTunesConnect web site (where user management is now controlled). Detailed instructions here.